GT40s Supporter
In January I took delivery from RCR of my “Turn Key Minus” RCR40. I had every intention of posting sooner, but the build, work, and life got in the way.

Car is a Mk1, right hand drive with 2” flares. Engine is a carbureted, aluminum block, Keith Craft 342 (302 based) that will be mated to a new ZF transaxle.

As a turn key minus I need to complete the engine install and other “minor” items. Although I am not building the kit, just doing what I need to do, is new to me. I have had some terrific help from my father, others locally and many of you from the forum over the last two years of planning. Fortunately Chris Kouba lives about five miles from me and has been extremely helpful and generous with his knowledge, experience, and time.

What I have been up to since delivery:

Complete:
In Process:
Next Up:
Some pics of car and progress attached.

Supporter
Very nice car Alan. Looking forward to reading about the driving experience when she is on the road.
Last edited: Jun 3, 2018
P

Beautiful car Alan. Keep us posted on the build.
P

What wheel and tire sizes are you running?
V

Looking good Alan!!!! Chris was a BIG help to me as well. You are fortunate to have him so close. Keep up the good work. When my wife and I come up to see Chris and Bethany we will drop over and get a look see. Take care friend
M

Alan,
Good to see another 40 will be on the road in our area. Looking forward to seeing it in person at a local event in the upcoming months.

World of Speed Cars and Coffee?
McMinville Cruise the Gut?

I plan to have my DRB at the Sunshine Cruz in Clackamette Park evening of the 15th. Feel free to stop by to introduce yourself if you attend.

GT40s Supporter
Good day today. I had been trying to figure out my routing from the thermostat housing down to the coolant pipes that run up to the radiator.

I was able to make it work with 90 degree silicone hoses and stainless tubing by going over the alternator, back towards the engine and down between the engine and chassis. Worked out surprisingly easy. Although it should work, I don’t like all the connections, so will take this to a pipe bender and have them make a two piece stainless setup.

Clutch install is next.

GT40s Supporter
Over the last month I have installed the clutch and re-mounted the gearbox. All went well - although I have not yet completed the slave cylinder installation. Clutch is a McLeod dual disc set up. I had the clutch, throwout bearing, slave cylinder and linkage supplied by Dennis at Pantera Performance. He was great to work with and everything has gone together well.

I also mocked up and had the coolant expansion tank made. Although I haven't mounted it yet, it is made to the exact dimensions as the cardboard mock up which clears the clamshell nicely. I think its is a work of art!

Since I have everything apart, I decided that I will pull the engine so that I can remove the radiator pipes that run through the "spinal column" and insulate them to help reduce heat transfer through the chassis to the cockpit. This was unplanned, but recommended.

Then mount and plumb the carburetor, finish the coolant system, figure out the throttle cable set up, etc.

Hoping to turn it over by the end of September...

GT40s Supporter
Since posting over a month ago, I got the flywheel, clutch, and throwout bearing installed. Everything went smoothly. Dennis at Pantera Performance was extremely helpful and everything supplied went together well. I still need to complete the slave cylinder and linkage, but all parts appear to fit.

I also built a cardboard mockup of an expansion tank and had it made locally. I think it came out great. (see pics).

Before I button everything up, I decided that I should take the time to lift the engine to access/pull the coolant tubes that run to the radiator and insulate them to help reduce heat transfer to the cockpit. I (optimistically) hope to complete this work next weekend.

Then next up will be completing the expansion tank install and coolant system, mounting and plumbing the carburetor, and figuring out the throttle cable.

GT40s Supporter
Its been over three months since posting and I'm getting close to firing the engine. Everything takes longer than expected.
Since July I...
- Mounted the coolant expansion tank
- Mounted the coolant catch can
- Had custom coolant pipe made from therm. housing down to return pipes.
- Installed starter (after realizing I was sent a starter for the wrong sized ring gear)
- Installed slave cylinder and filled and bled clutch.
- Filled gearbox and engine with oil and primed the engine
- Turned engine over on the starter (This felt like a major accomplishment)

I am now very close to firing the engine and expect to do so over Thanksgiving when my parents come to visit. Between now and then I need to finish the throttle cable, fill and bleed brakes, and some other minor items . Goal for Thanksgiving is to get it started and hopefully move under power. 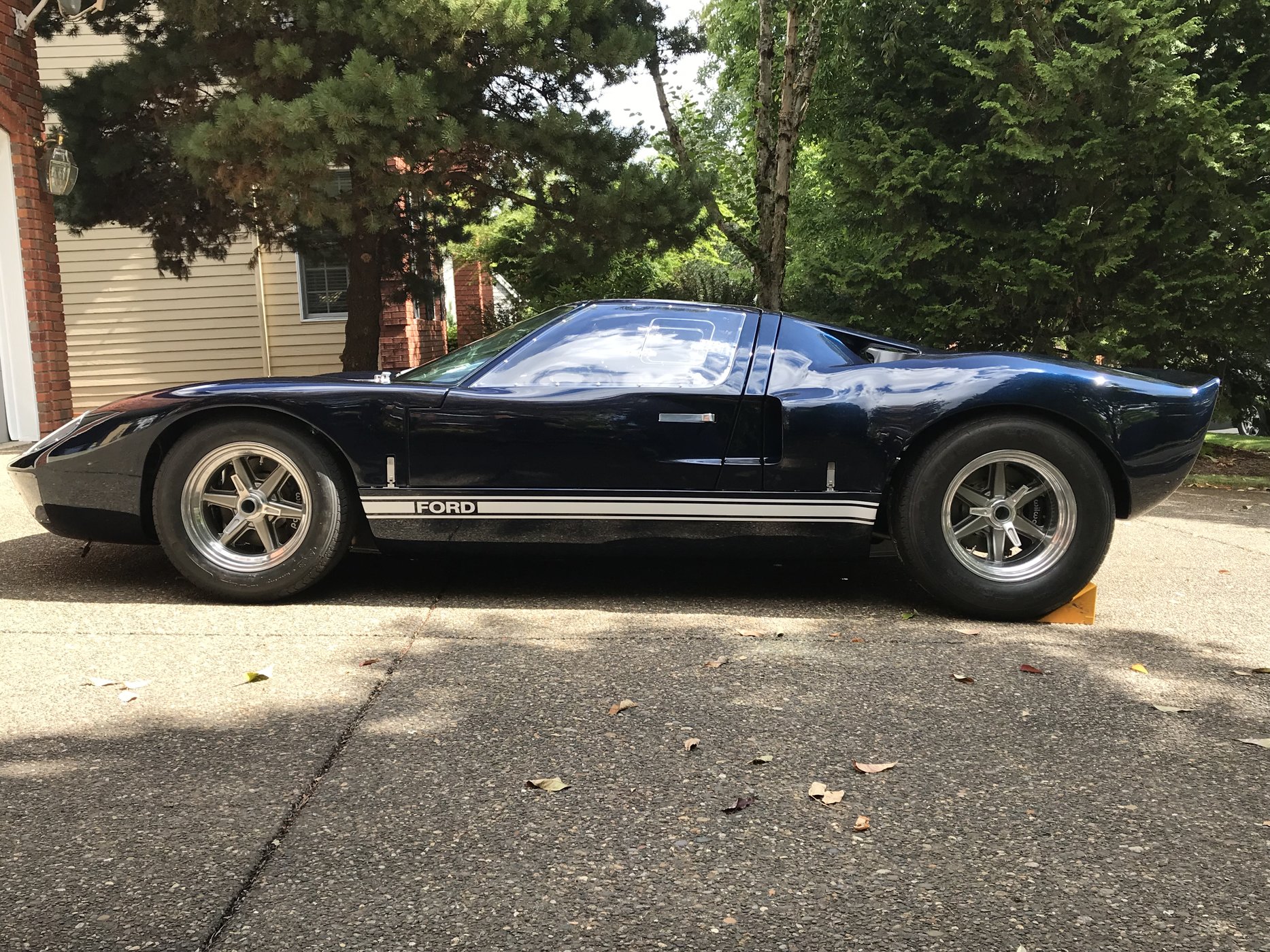 Pic attached is from September when we pushed it outside for some fresh air!
B

Supporter
Good luck with the engine start. Had one leakage so far, but other may show up after being on the road.

GT40s Supporter
First start! Started yesterday on the first crank. No major issues, but a small fuel leak that was easily sorted. Chris Kouba and another buddy of mine spent most of the day with me prepping and advising. I couldn't have done it without them - their generosity with their time yesterday and the last year has been unbelievable.

Since the initial start, we worked on bleeding air out of the cooling system. I continued this today and made good progress. I think the system is now full as the expansion tank stays at the same level on each heat/burp cycle. Cooling fans still have not come on, so I need to find out at what temp they are supposed to turn on. (they were installed by RCR).

Next goal (after sorting the fans) is to move under its own power. All I need to do is complete the bump out on the firewall, finish mounting the shifter, and fill/bleed the brakes. Doesn't sound like much, but everything takes longer than expected. The good news is that I have the next three days to work on it almost uninterrupted.

The picture attached is the happy start team. Chris is in the center, Kasey is on the right. It was a great day!

GT40s Supporter
Worked progressed pretty well over Thanksgiving weekend. I finished the firewall bump-out, shifter is mounted, and throttle cable is finished. Short term goal is to get it moving, I just need to fill and bleed the brake system and I think I can do a slow speed test in the neighborhood. Then next up is installing and wiring the thermostatic switch for the cooling fan (I can run it manually in the short term), work on heat shields and cooling options for the engine bay, and finish cockpit ergonomics (seating, steering column, etc). I also found an oil leak on an AN fitting by the remote oil cooler. As the rain comes to Portland I hope to take the winter to finish all the small details to hopefully be able to run it somewhat reliably when the sun comes in the spring. Pics of bump-out attached. More thanks to Chris Kouba for the use of his brake on the bump-out.

GT40s Supporter
Another big day today. Finished bleeding the brakes and chasing some leaks and then actually drove it. Turned out that the first run was in third gear. We made some adjustments so that I could find first and the attached link shows this run. I was able to shift into second twice. I cant find reverse, but Mr. Kouba has good experience adjusting these boxes and will be assisting soon. Terrific feeling making this step today. Have not tried to post video, so I am hoping this works... https://www.youtube.com/watch?v=UGR3KSVjlmo

GT40s Supporter
Chris Kouba came by today and in just over an hour was able to show me how to adjust the shifter and gear box. I now can find reverse (and all other gears).
Now that I have figured out YouTube, the following link is the first start from Thanksgiving week. (admittedly a little out of order). That's Chris working the throttle at the carb, and Kasey with fire extinguisher at the ready! https://www.youtube.com/watch?v=n-5I83QWrBY
You must log in or register to reply here.
Share:
Facebook Twitter Reddit Pinterest Tumblr WhatsApp Email Link
Top