I'm not sure about everyone else, but it'd be awesome if we collectively came up with some sort of "emblem" for our cars. You know, like Rapier had one on it's front and most other car manufacturers do as well. I'm not thinking of something quite as big as that, maybe more simplistic? Just thinking out loud and would be cool for all of us to combine our opinions and thoughts into one emblem we'd all (or at least mostly) agree upon.

Depending on how complex it is, I have a buddy that possibly would be willing to make them. I'm guessing most of us have carbon fiber on our cars at least on the outside and possibly on the inside as well. This particular guy makes his own sheets of carbon fiber and uses the CNC to cut out the actual emblems. To take stuff a step further, he applies a resin on top of them to give them a 3D domed effect and like the car they're made in the US. Another option would be to get some place in china produce plastic or metal-like emblems like you'd typically would see, but of course this may be a greater cost and personally carbon fiber is just flat out cool looking.

Worse case if this doesn't work out, since our cars don't have any designation other than on the rear bumper, I plan on tracing mine and sketching it up in CAD and the guy mentioned above said he's willing to make me some for the sides of the car in domed carbon fiber. He said he'd be willing to make more if anyone else was interested and only if Fran was okay with it since that's his logo.

Here's some examples of stuff he's done... This is on my car, carbon fiber inlays on the C5 flags. He also makes door sills and several other carbon fiber related items.

He improved on that design with an overlay before applying the resin.

Still work in progress on this red kevlar/carbon combo

THOUGHTS? OPINIONS? I'm no artist, but I can use CAD and would be willing to keep updating it until everyone is happy.

GT40s Supporter
I don't have any ideas for the emblem, but if you come up with something, I'd be interested.
M

I would be in.... something clean and simple .... SLC. Would probably need to get permission from Fran????
I

I agree, clean and simple. The SL-C would be easy enough, but just seems like it needs more. I wonder if something as simple as just a certain type of font, kind of like how alot of car models are. Or I guess it could also be considered a manufacture since SLC is kind of both?

Personally I sort of think it needs both. Something for the front center, more like a manufacture type of emblem, like Audi's rings, Chevy's bowtie, Ford's oval. And then something for the sides that say SL-C or SLC.

I'm not sure if it's trademarked or not, but regardless of legal aspects I definitely won't do without Fran's approval for sure. Without him, we wouldn't have the pleasure of building them.
M

Glad you started the thread! You inspired me to work on a badge through late last night!

What do you guys think? It's inspired by the "Shield" style emblems. I spent 2 hours picking out the dang fonts. Still needs some work, but the render came out pretty sick! 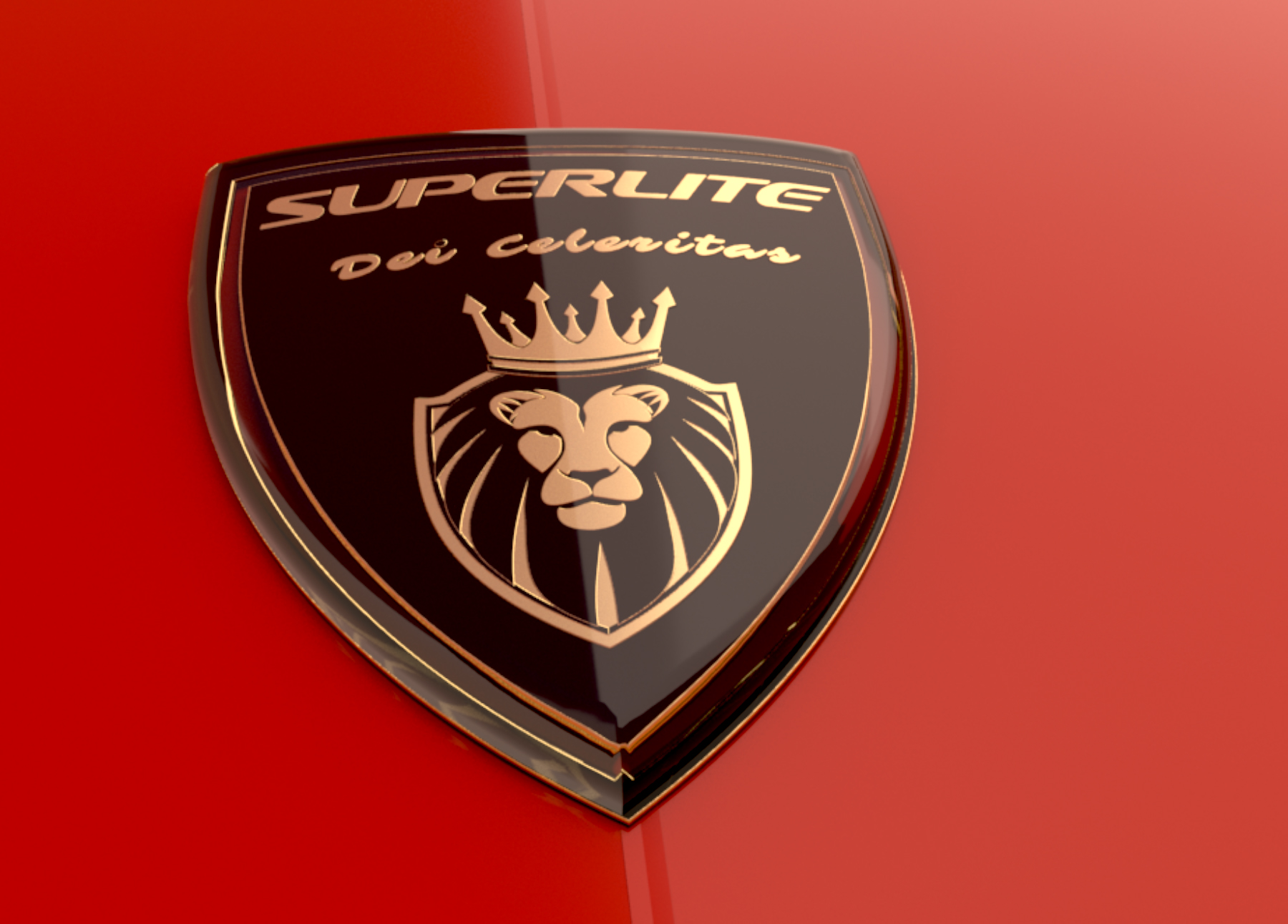 Glad you started the thread! You inspired me to work on a badge through late last night!

What do you guys think? It's inspired by the "Shield" style emblems. I spent 2 hours picking out the dang fonts. Still needs some work, but the render came out pretty sick!

Custom Enamel Badges
These are a minimum order of 40 badges, they are cloisonne style metal and enamel badges that will last a lifetime. They are only $25 each

Please bump this thread if you are interested in getting an enamel and metal custom Superlite Badge.

Also, Fran Hall, if you are watching this, can you provide a vector file of your Superlite Cars Logo?

GT40s Supporter
I like the shield and the lettering. Not crazy about the lion.

GT40s Supporter
Here's something I threw together pretty quickly, just for ideas:

I like the top one Pete B. Did you envision this on a front side fender or as a hood emblem?

I see your emphasizing the stars and stripes angle with checker flag, kind of like the corvette emblems.

MasonS said:
I like the top one Pete B. Did you envision this on a front side fender or as a hood emblem?

I see your emphasizing the stars and stripes angle with checker flag, kind of like the corvette emblems.

I'll have to come up with some more meaty symbols instead of a lion
Click to expand...

For me, it'd be a hood emblem. I already have "SLC" on the fenders.
M

I like the understated look of Mason's design. Since Fran is a big fan of the made in Detroit angle, I thought incorporating the flag of Detroit in an emblem had value. Also, if it avoided being model specific one could use it on other Superlite vehicles.

If one were to take Superlite more literally wouldn't a bird mascot be appropriate? Maybe a stylized version of a humming bird (light, quick)
Last edited: Jul 12, 2017
I

I dig Mason's shape of the emblem. Not so much the lion, but I'm not sure why. I do like the simplicity of it. It's ironic since I own one and think the flags are too busy in my opinion. I'm not sure how, but maybe some way give a subtle nod the Vette since using a LS is more/less a standard on a SLC?

I like where Mesa is heading with an animal choice. Light and fast, hummingbird is exactly that. I'll have to think on other options, but may be hard. Something light, fast and aggressive?

I also agree it should be more of a Superlite emblem for the front of the car or MAYBE the rear depending on size/style (if there's even room). Leave the sides and rear for SLC and of course the lower OEM on there, maybe with added overlay to make it stand out a little (just thinking out loud for mine).

I like where your heading Mesa with the light and bird like theme. Also, I'll take a look at the Michigan flag, for the made in detroit angle. Perhaps I could add "Motor City" somewhere?

I'll explore the wings motif and birds, I'm trying to stay away from the GO USA motif of stripes and stars and also staying away from Hot Rod / Muscle motifs. I would like it to look like a Euro supercar badge and was looking at a lot of heraldry and family crest type images. We could also go with a more strictly patterned graphic like the Koenigsegg badge.

Del, I would love to have a personalized bar on the side kind of like the Designo Di Pinanfarina badges you see on Ferraris.

Here's a billet badge maker, that has some cool designs for signature badges.

Mason,
The city of Detroit has a flag, could not upload a copy myself.....It has Lions on it and Stars and Stripes

Not saying its the answer, just an option for consideration.

Mesa said:
Mason,
The city of Detroit has a flag, could not upload a copy myself.....It has Lions on it and Stars and Stripes

Not saying its the answer, just an option for consideration.
Click to expand...

Thanks for all the creative work. I'm in on a group buy for whatever design we come up with.
M

Ha, thanks Mesa, I guess everyone wins. I get my heraldic lions, we get some made in the USA love, and Fran gets to rep Detroit. Also, I was not aware of the Detroit flag before you mentioned it!

I think that if we keep the badge Two tone, gold and black OR silver and black I can work with the Detroit flag and make a representative version that works at the small scale of the badge.

PeteB, I like the concept of the hummingbird, but looking at the car, I feel like it has more of a sense of menace and tenacity and so some screaming Raptor or Falcon or another Bird of Prey would be more along the lines of it.

BUT..... technically this is the Manufacturer marque so it should represent the brand of Superlite Cars, which are lightweight racers.