Here's a progress update on the detached garage build.

I've been busy doing build site preparation while working with a draftsman on the plans. My goal for site preparation is to get a decently level area that includes the building footprint and in addition 20 foot concrete aprons in front of the drive-in doors. The vast majority of the building foundation will be set directly in the untouched rock that underlies the ridgeline. The NE corner and entrance aprons are on fill obtained by cutting away the rock and dirt that makeup the ridgetop. I only have a John Deere compact tractor but so far it has been able to breakup/cut through most of the rock. 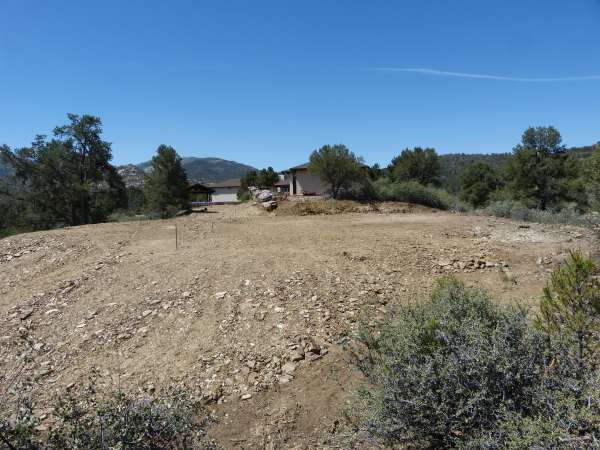 The parking apron on the down sloping side of the build site is where the vast majority of fill has gone. 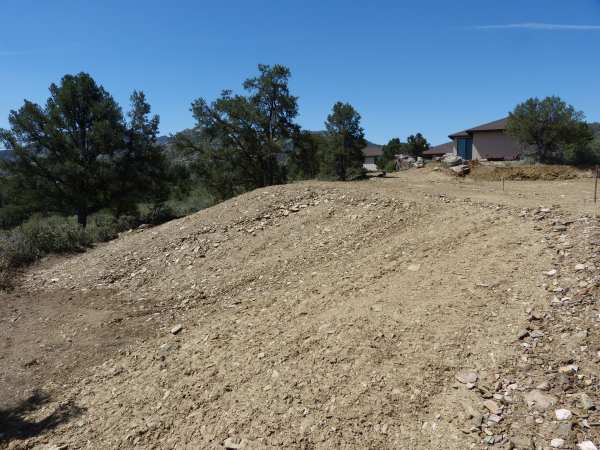 I've also been able to source fill material from the gravel drive leading to the build site. My objective there is to minimize the slope driving up the hill to get to the garage. So far I've lowered the crest by about 4 feet. 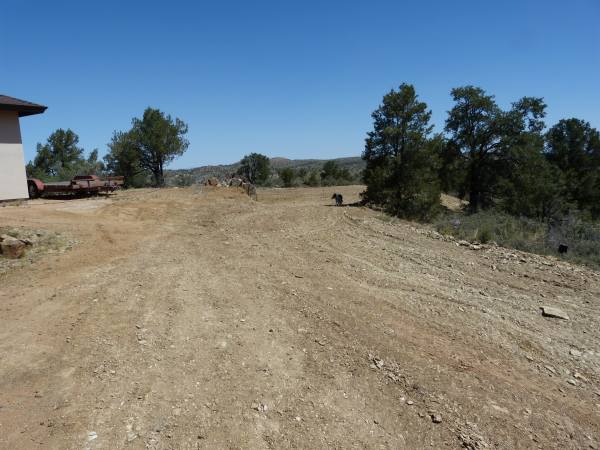 There is a natural rock formation/outcropping that I'm planning to retain for the character it adds to the landscape. It looks like I'll need to remove a chunk of the lower portion in order to be able to navigate long wheelbase vehicles to the big garage door. I'm slowly cutting away around the rock formation so it doesn't get damaged in the process. Then it's a matter of finding existing cracks in the portion to be removed and coaxing stone chunks to separate out with a large hammer and chisel. 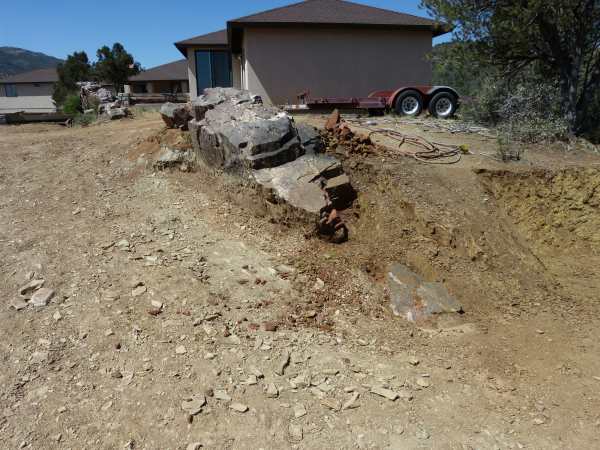 Now for the plans. These are now ready for submittal to the building permit process. Fortunately, the build site is out in the county so the review is only for building code type stuff. There is no architectural review or neighbor approval involved. The biggest hang-up in getting the plans completed was the truss design. I wanted to run an "I" beam down the center of the structure for a chain hoist. We had to do a few rounds with the truss designer to get it done. The "I" beam will be supported every 24 inches from a truss and I'm confident none of my engines are heavy enough to put any real strain on the trusses. 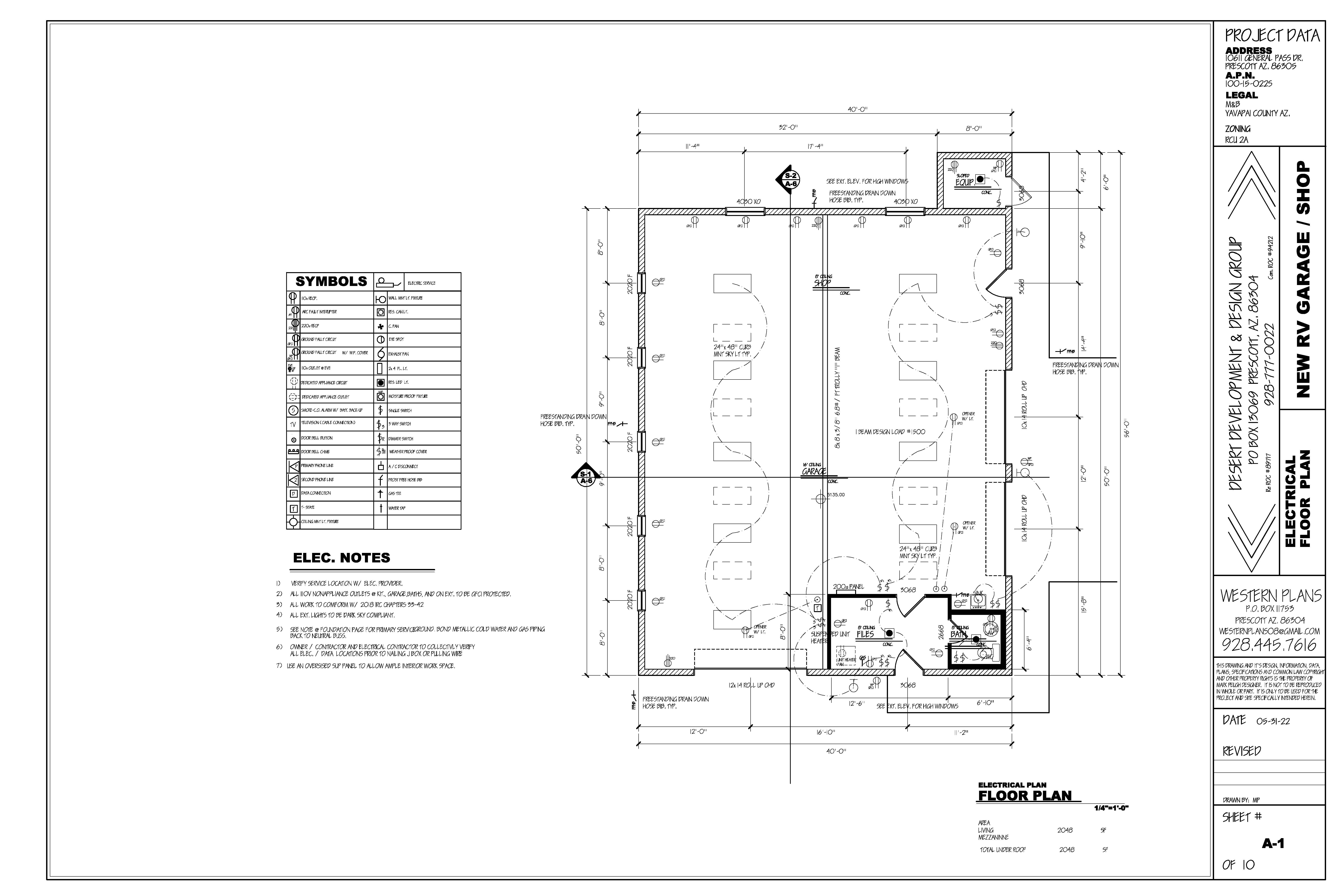 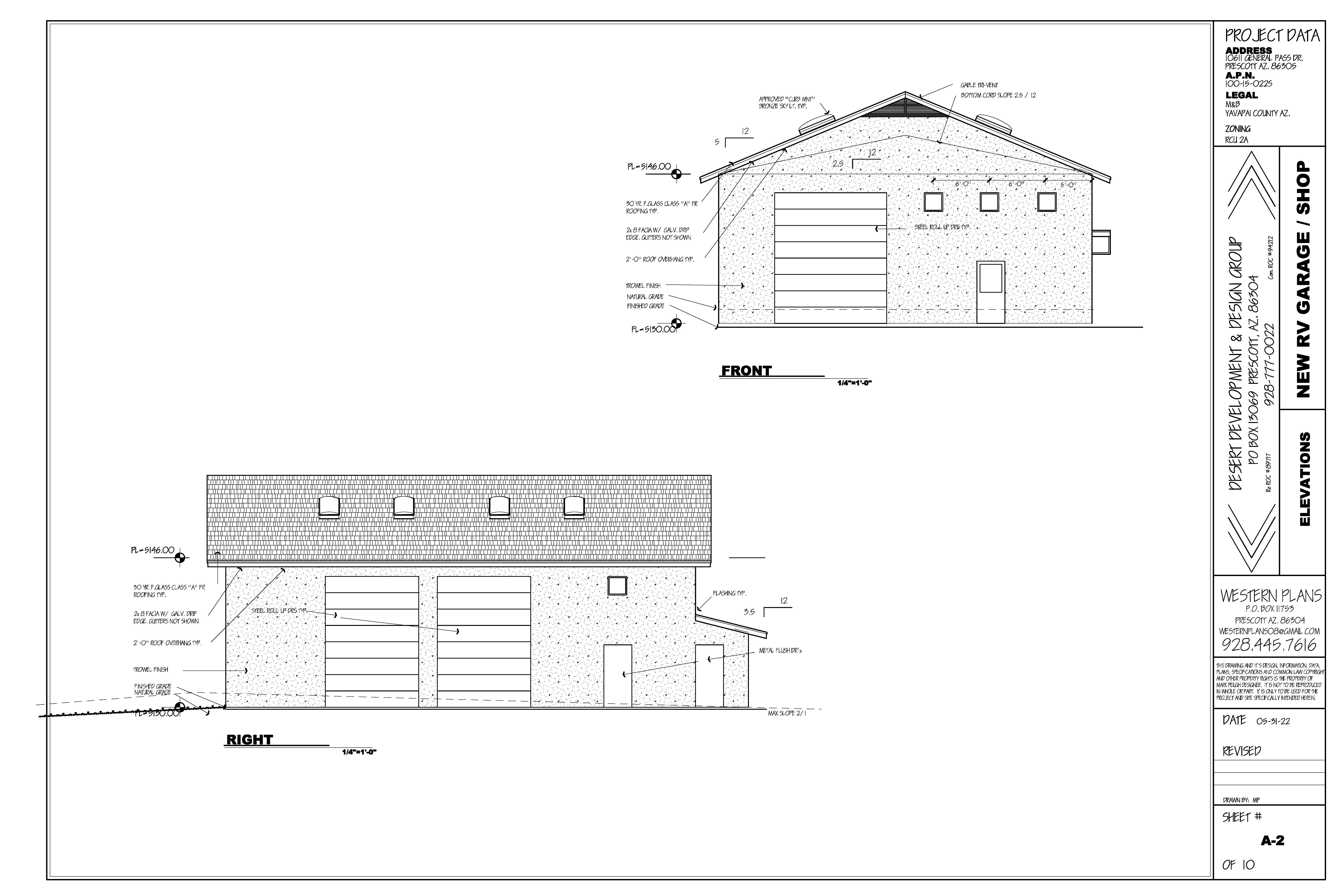 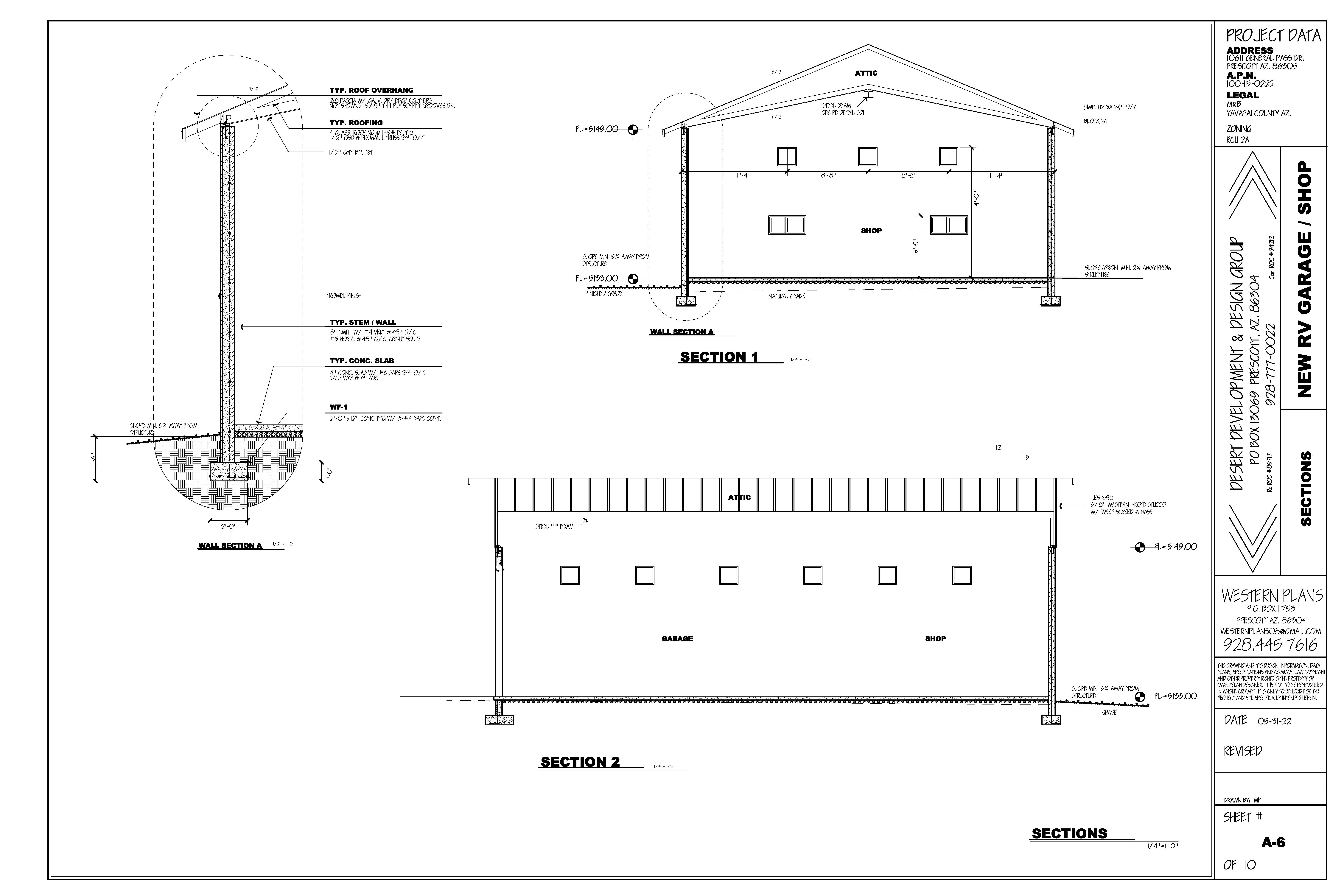 The walls are going to be concrete blocks and the large doors will be rollups. I put an equipment room off the end of the building for keeping the air compressor noise down. I decided to do the mezzanine as a standalone structure within the building shell. That way if someone down the road wants to park a 45 foot RV in this garage, they can just remove the mezzanine and be good to go.

Now for the wait on the wheels of the government permit review/approval to turn. I'm told this part can be anywhere from 2 to 3 months these days.

Staff member
Admin
Lifetime Supporter
Looks great! Do yourself and your compressor a favor and add a powered vent to its roof.. Compressors build a whole lotta heat!

Supporter
Why not mount the air compressor on a concrete pad outside? You gain a little extra space inside the garage and the noise inside is reduced.
J

Big-Foot said:
Looks great! Do yourself and your compressor a favor and add a powered vent to its roof.. Compressors build a whole lotta heat!
Click to expand...

manta22 said:
Why not mount the air compressor on a concrete pad outside? You gain a little extra space inside the garage and the noise inside is reduced.
Click to expand...

The objective for the "Equipment Room" is essentially a covered/roofed external concrete pad but I thought it best to enclose it with a wall to help trap the noise from the neighborhood. The neighborhood is currently very quiet, serene and I don't want that to change.

Thanks for the reminder for the need to vent the room. I'm guessing a vent down low in addition to a roof vent would promote thermal flow of air as the temperature inside the room goes up. I'll have to monitor things once the garage is built to see if a powered ventilation fan is needed for heat dissipation. If so, I'm guessing some sort of thermostat controlled fan would be best so it would come on only when needed.
J

bill kearley said:
Having that outcrop inside your shop would add quite a impact/sitting area over looking the floor area
Click to expand...

It wouldn't be the first structure to be built around a rock outcrop here in Prescott. We saw a couple of houses that featured a large rock within the interior when we were shopping for a new place. Unfortunately, the well head is only about 10 feet from that rock outcrop so there isn't a way to incorporate it into the building and also have the required distance from the well. So having it serve as a retaining wall is the best I can do.

Supporter
Wire a bathroom fan (that's what I would use for the air compressor room) so it comes on when the compressor is on and be done with it. Vent it the same way as a small bathroom. Cheap and easy to install as the shop is built.
J 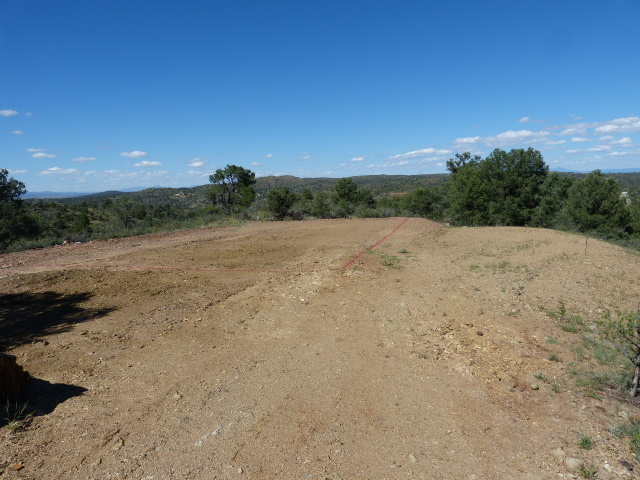 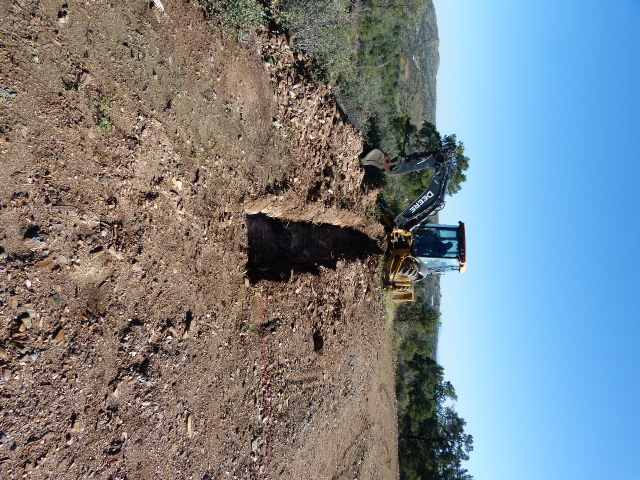 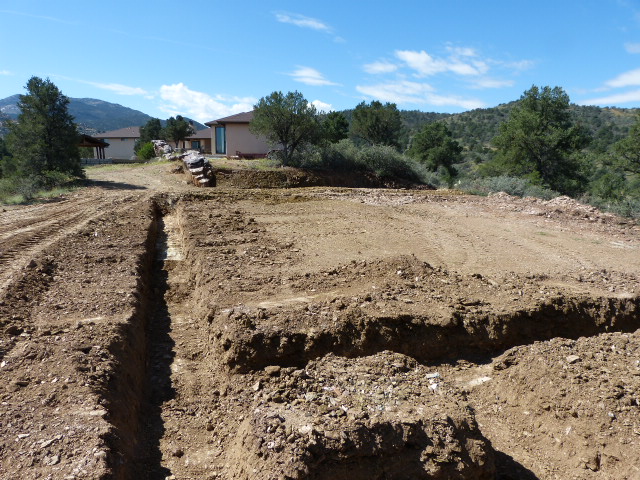 Progress on the workshop/garage continues slow, but steady. Here's some progress pictures. 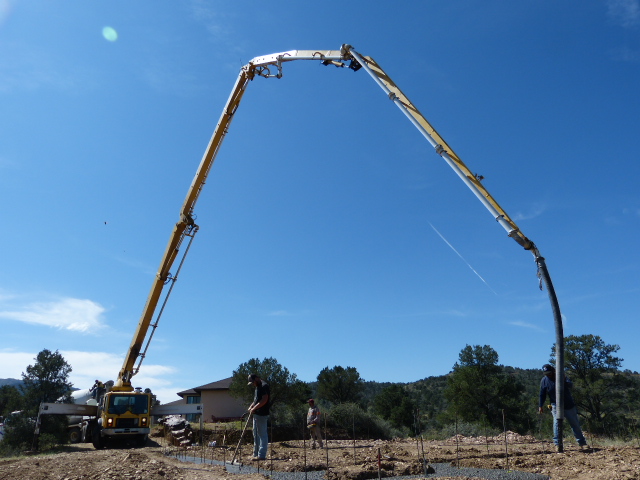 The footings are being poured directly into the dug out trenches. Given the ridge top location, the concrete must be pumped in as there's no direct access for concrete trucks two sides. 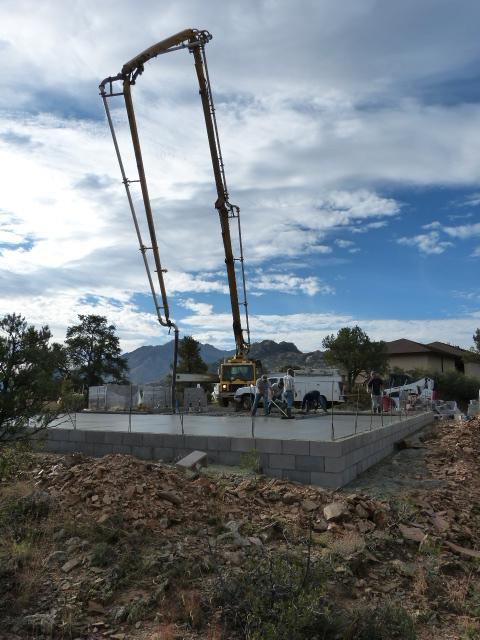 Concrete blocks were used for stem walls and then a 4 1/2" thick slab floor poured within. 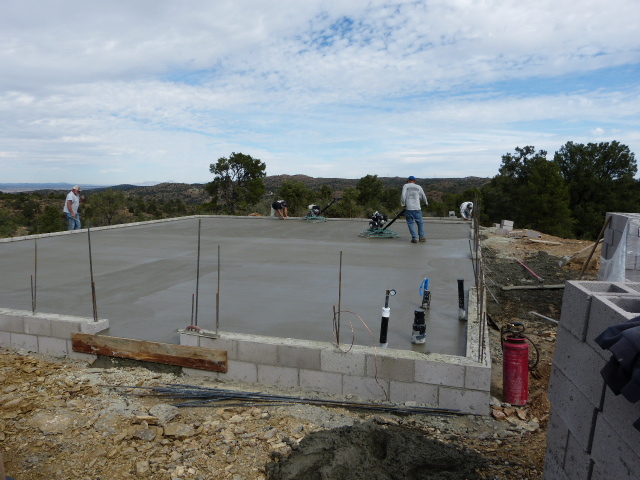 The floor was finished with the rotary troweling machines. The concrete block walls can now go up.

Lifetime Supporter
Very nice, I;m hoping my garage permit will be approved any day. I'm interested to know how much your foundation & slab cost? I know prices vary regionally, but my contractors quote for the 1,860 sqft foundation / slab seemed excessive.
L

Joules5 said:
...I'm interested to know how much your foundation & slab cost? I know prices vary regionally, but my contractors quote for the 1,860 sqft foundation / slab seemed excessive.
Click to expand...

They all will be these days.
Trust me...
J

Joules5 said:
Very nice, I;m hoping my garage permit will be approved any day. I'm interested to know how much your foundation & slab cost? I know prices vary regionally, but my contractors quote for the 1,860 sqft foundation / slab seemed excessive.
Click to expand...

Unfortunately, I don't have the information to answer this question. My arrangement with the general contractor is such that I know what the overall cost of the structure is but not the various sub-parts. I can say that the overall cost is much greater than I expected and does feel excessive. I did double check with friends very knowledgeable about current construction costs and they verified the quote I had been given for the garage construction was/is reasonable. Not to get political, but the "geniuses" that let the inflation genie out of the bottle should go down in the history books for the crooks they really are. It's us hard working folk that keep paying the price.
J

Garage walls are going up!! The progress seems like it's a snails pace but then again I'm anxiously waiting to use it. 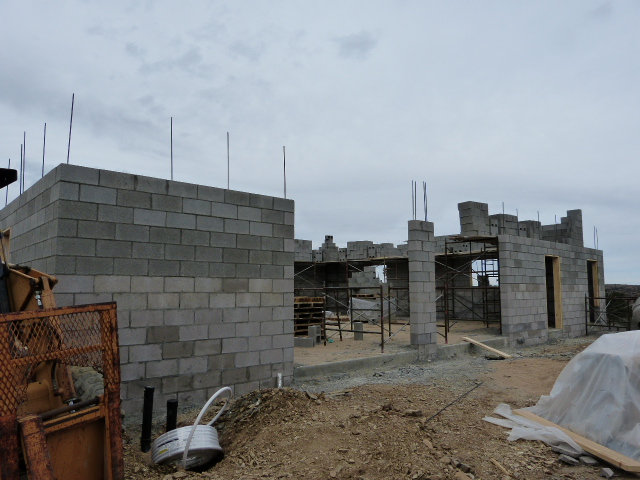 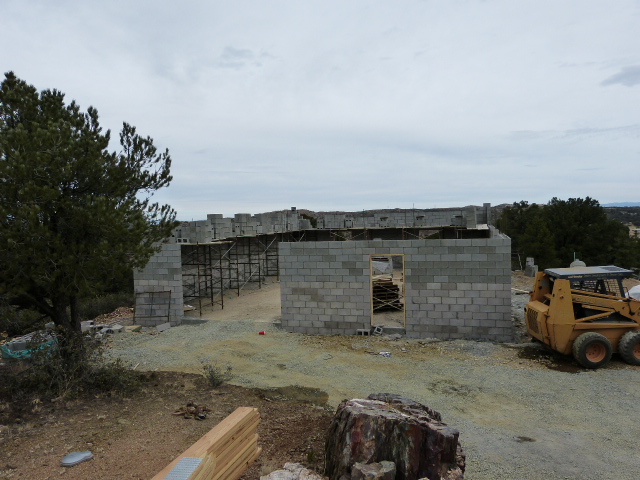 The appendage on the left is the air compressor room. 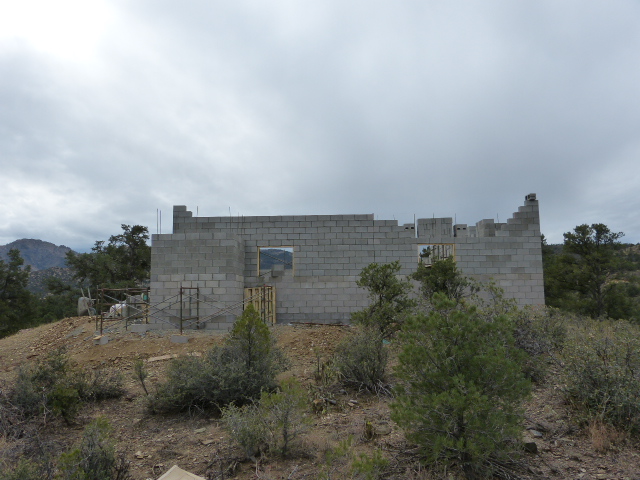 And these trusses are ready to go to form the roof once the walls reach their 16' height. 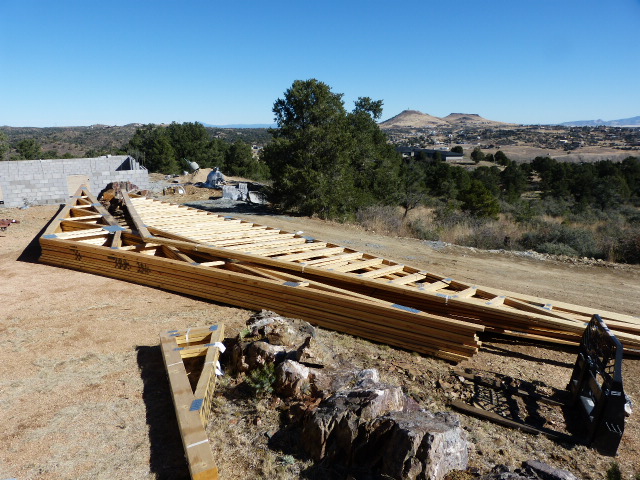 The contractor told me he's thinking they'll have the trusses in place by Christmas. I think he's being optimistic given the current pace but boy, wouldn't that be a great Christmas present

Very jealous, my plans should be getting re submitted for consideration this week with a bit of luck.
M

Love the CMU walls. That’s going to be very nice inside. Are you during our walls fir Insualtion fans sheet rock inside?
J

The garage walls are up!! 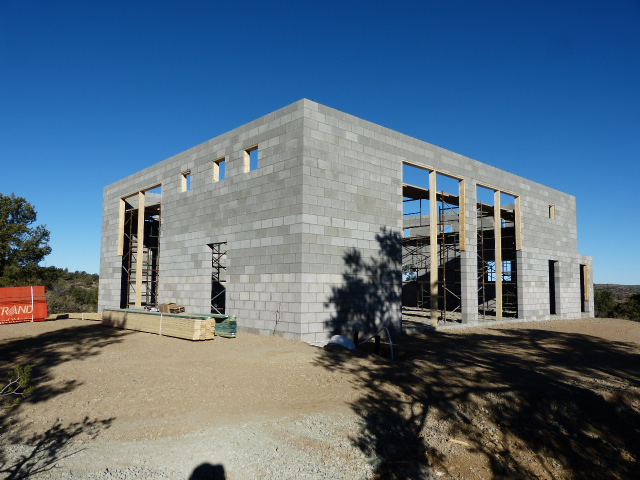 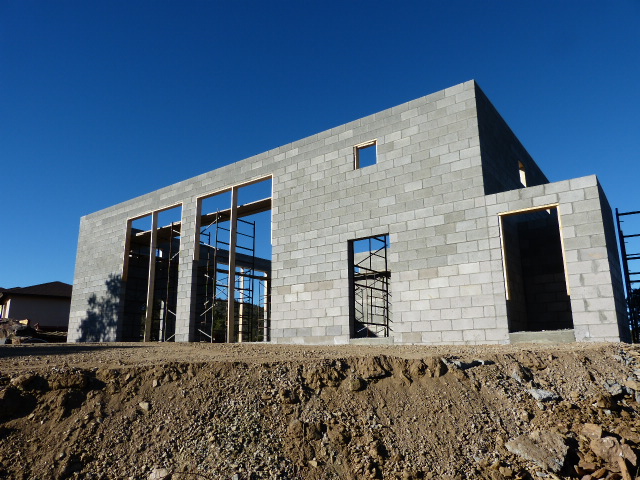 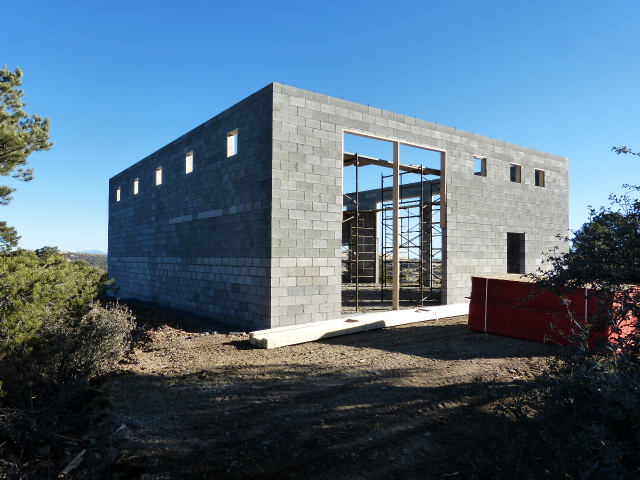 They didn't get the roof on by Christmas but are suppose to start it day after. So maybe the roof will be on by year's end.

Merry Christmas to all!!
J

A framing crew and crane truck showed up the day after Christmas and ... 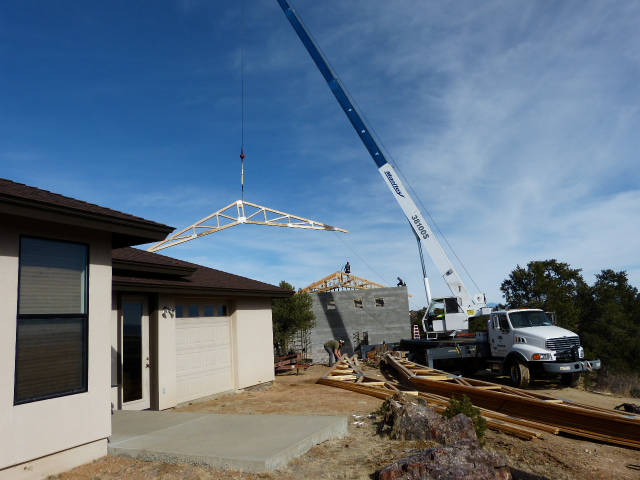 In about 1.5 days the roof was on and framing complete. 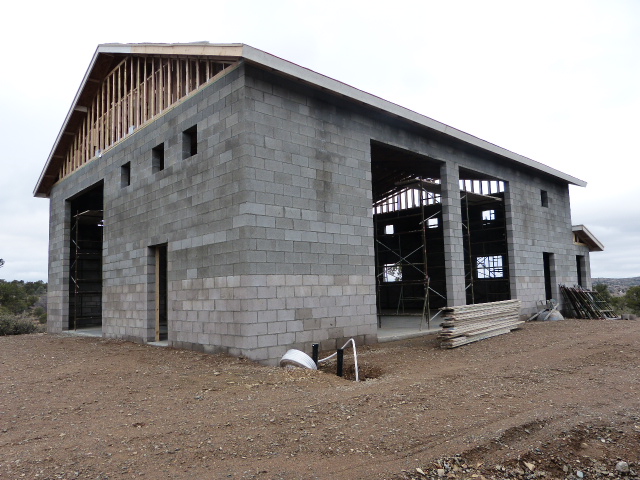 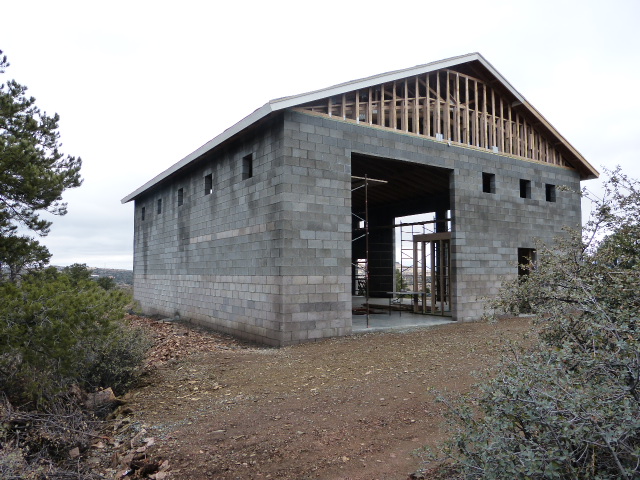 The half bath and small office space are framed. 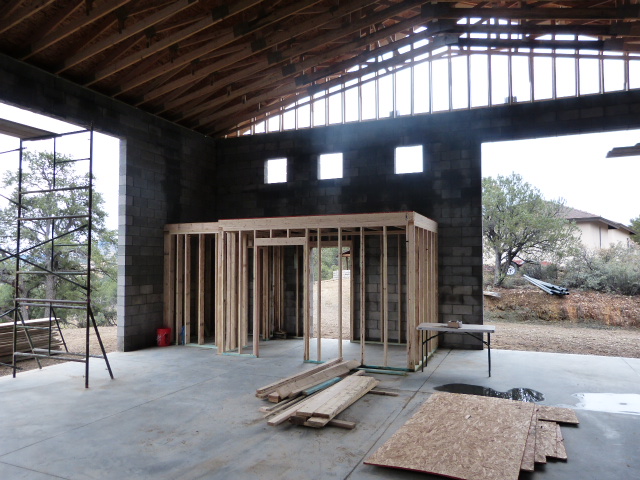 It's starting to look like a workshop but still quite a ways to go.

JHeinke said:
A framing crew and crane truck showed up the day after Christmas and ...

In about 1.5 days the roof was on and framing complete.

The half bath and small office space are framed.

It's starting to look like a workshop but still quite a ways to go.
Click to expand...