A
The Ford F3L (also know as the P68) has featured several times on this forum.

The car was designed by GT40 designer, Len Bailey and built by Alan Mann Racing
In West Byfleet in Surrey, with support from Ford in Detroit. It was a radical departure from the GT40 and was powered by a Ford DFV F1 engine. Even though the shape was stunning for its day, there were aerodynamic problems and the cockpit was cramped. Two cars were built for the 1968 season and one was written off in an horrific accident in the Nurburgring 1000 km. Driver was Chris Irwin who was seriously injured and cause of the accident was a hare that ran across the road. The car did a massive backward flip and came down on its roof. I was told that it was so bad that the marshals ran away. Other drivers pulled up to assist Irwin.

One theory was that the hare got jammed into the left front brake thereby reducing braking by a critical 25% as Irwin was heading up a rise. More likely was that the hare broke the underbody mountings which caused the nose to lift and which created a wing effect with upward lift.

In 1969 one more coupe and a spyder version were built. As the car required more development money and never won a race Ford canned the project.

My brief involvement with the car, which is the rebuilt Irwin car and now owned by David Piper, is described below.

In February, 1987 I interviewed David Piper for my book on the history of the Kyalami circuit at his house in Windlesham, Surrey. David and co-drivers competed in the Kyalami Nine Hour and the Springbok Series from 1961 to 1969 and won the Nine Hour six times, five times in Ferraris and the last time in a Porsche 917. Imagine writing a book on Wimbledon and not including John McEnroe!

At the end of the interview David told me about the International Sports Prototype series that he and friends started in 1981 and that he would love to bring the series to South Africa. 'Done', I said. His body language said, 'Oh, yeah'.

The ISP series is for racing sports cars from the 1960s and early 1970s era, ie AC Cobras, Ferraris, Porsches, GT40s, F3L, Lolas, McLarens, Matras, Chevrons, etc. Even though the cars were worth fortunes at the time and much more today Piper and friends decided to race them instead of putting them in glass boxes. They were after all racing cars and as such Piper and company would enjoy driving them and would give pleasure to spectators, many of whom just love that era of racing. I don't think the current sports car series comes near. The atmosphere has gone particularly at the new clinical Le Mans with the old Esses no longer there. If the Bentleys were painted blue they could be mistaken for Donald Campbell's Blue Bird speedboat. Agree? Disagree?

David told me about his accident at Le Mans in 1970 when doing film sequences for Steve McQueen's film 'Le Mans'. Coming through White House corner a rear tyre deflated and the Porsche was totalled. The car broke in half and all that kept the two halves together was his right foot trapped under the throttle. He remembers lying in a ditch with brake fluid dripping on the open wound and two nuns bending over him to assist him.

Back in England the foot was amputated above the ankle. One day in hospital with his racing career apparently over old Piper was feeling a bit sorry for himself. In walked Ferrari engineer and works driver, Mike Parkes, with legless Battle of Britian ace, Douglas Bader. Bader glared at Piper, undid his belt and dropped his trousers. He said, 'Look at me, old chap, you have nothing to worry about!' David said with a grin that he suddenly came right BIG TIME! Some years later he discovered that he could drive a racing car again which lead to the ISP series. He stomps his plastic foot on the throttle and then brakes with the left foot. At Le Mans last June in the classic race before the 24 Hour he got his 917 to over 200 mph down the Mulsanne straight. In December he turned 73 and I really can't figure out how he does it. Bader and Piper &amp;#8211; Bulldog breed as they say!

Anyway, when I returned home after my February, 1987 trip I set about organising David's ISP South African series. For about nine months I liaised with Liz Piper with regard to air tickets, shipping costs, etc. As sponsorship was required I handed my file to a committee member of the Western Province Car Club which controls our local Killarney Circuit. This guy can sell ice to Eskimos and persuaded the boss of Yellow Pages to sponsor the series. It was on and three races were planned, one at Killarney in Cape Town, one at the East London Grand Prix circuit (where Jody grew up - the city not the circuit!) and a Monaco type round the houses at Durban.

I was at Killarney when the containers arrived and to our horror we discovered that the red and gold Ford F3L had broken loose and for 10 days on the high seas it was thumped backwards and forwards against the container walls.. It was not a pretty sight. With little time at hand we rushed the car to my factory for repairs. My English partner and fibreglass expert, John Bishop, did the job and in double quick time the F3L as ready for practice. Would have been an ideal opportunity to pull a set of moulds &amp;#8211; quickly! HeHe! In fact earlier someone on the forum asked about an F3L replica.

There is a sequel to the repair story. Recently the F3L was entered in a classic race at Spa and on a wet circuit it spun like crazy through a few 360 degrees at some terrible speed. It was discovered, about 12 years later, that the fibreglass repairs at the rear were 'a little on the heavy side''. Whoops, sorry about that! The F3L must have one of the longest tails in the business and any slight extra weight would create a gyroscopic effect.

After the 1988 visit there was a long lay off and since 200O ISP has been back every year. David and friends will be back at Killarney on February 7th and 8th and you've guessed it, the never-say-die F3L will be back! Chris Chiles will be bringing his original dark red GT40.

What would the world be like without the Blue Oval? Thanks Henry and RIP!

I heard that although Len Bailey's windcheating body design helped the F3L to over 220mph, it was very unstable in its first outings, to the point where John Surtees refused to drive it! Any downforce created was mostly at the front wheels, which made the car more unstable as speed increased. This led to the addition of a spoiler on the front and a new rear spoiler/wing, which helped with stability - but not reliability...

Although the F3L could theoretically blow the doors off the GT40 (for example Frank Gardner's car was over seconds faster than Jacky Ickx's JWA GT40 in practice at Spa) it was dogged by reliability problems, dropping engines just a few laps into each race. The DFV Cosworth was a new design, and through no fault of Len Bailey or Alan Mann, Ford lost interest. It was a shame because the F3L was a real first - engineered just like a F1 car, but with enclosed bodywork.

It's nice that one F3L is still being actively raced - the other survivor is never raced but is still around and in original condition.

Rob
A
After my post and the pic of the rear end the GT40s website wouldn't open for a few hours.

Here goes again with a pic of the front end.


Rick /ubbthreads/images/graemlins/shocked.gif
D
Has anyone ever made a replica of a F3L?

No, no one has ever made a replica of the F3L. As the car is extremely impractical with tight cockpit and right hand window that rests on the driver's head I doubt that we'll ever see a replica. Also what engine would be fitted. You don't find Ford DFVs around every corner.

Rick, I heard a few days ago that someone in Johannesburg, a Porsche nut who owns 43 Porsches, has a full set of moulds and tooling for the GT70. Once again not a well-known car, even less so than the RS200.

Ross, I've been asked several times for my CAD drawings that I made off the drawings supplied from S. Africa. I agree with Andre that the car is too impractical for anything other than what it was originally designed for...

Mine you, it is a gorgeous car.

Andre, you mentioned about the GT70, any chance of seeing a kit...?

The Other Rick /ubbthreads/images/graemlins/smile.gif
H

There's some interesting stuff and a series of photos on this page.
Click on the thumbnails to see some good sized pictures
F

There is some mention of an F3L spyder. That sound pretty

neat! That certainly would eliminate the helmet clearance

problems of the coupe!

Does anyone know whether it still exists or if there are

any photos of it?

The P69 was a radical successor to the P68 in Spyder form. A picture of this Alan Mann car appears below: 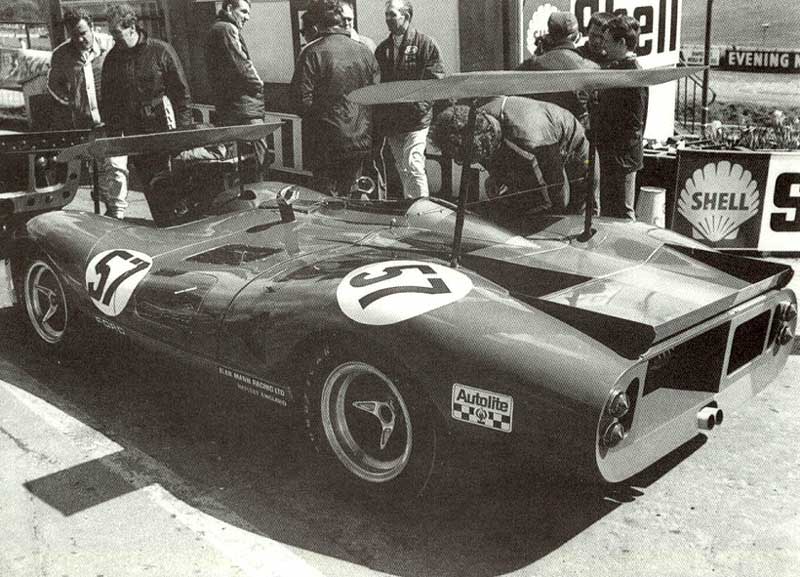 Check out more images on the Nevada Shelby website:

Still looks pretty cramped to me! /ubbthreads/images/graemlins/grin.gif Not sure that the aerofoils would be street legal, but I've always thought this is a fantastic looking car.

In addition, here's a cutaway showing how cramped the P68 would be.

Got the general outline drawings for the Spyder too...

Looks cool, but I just don't know about all those Chaparral airfoils...

I have seen a bunch of photos of this car, but could't

be sure if it was a P69, as the two cars are so radically

different. The P69 looks like Jim Hall built it, with those

wings. I'm sure that they were necessary, to create

downforce, but couldn't they come up with anything

Is anybody aware of any P69s, still in existence?

From the docs I've collected, Bill, apparently the P69 didn't make it, unfortunately. If I can get my scanner going, I'll post the 4-way drawing in this thread...

Rick
P
Here are some pics I took at Zwartkops -

Cool pics, thanks for sharing, Pierre.

Very interested interested in a set of drawings for the P68, I noticed in this thread that 'F3L' has a set of CAD drawings. being very new to on line forums any suggestion's on how I get in touch with him in person.