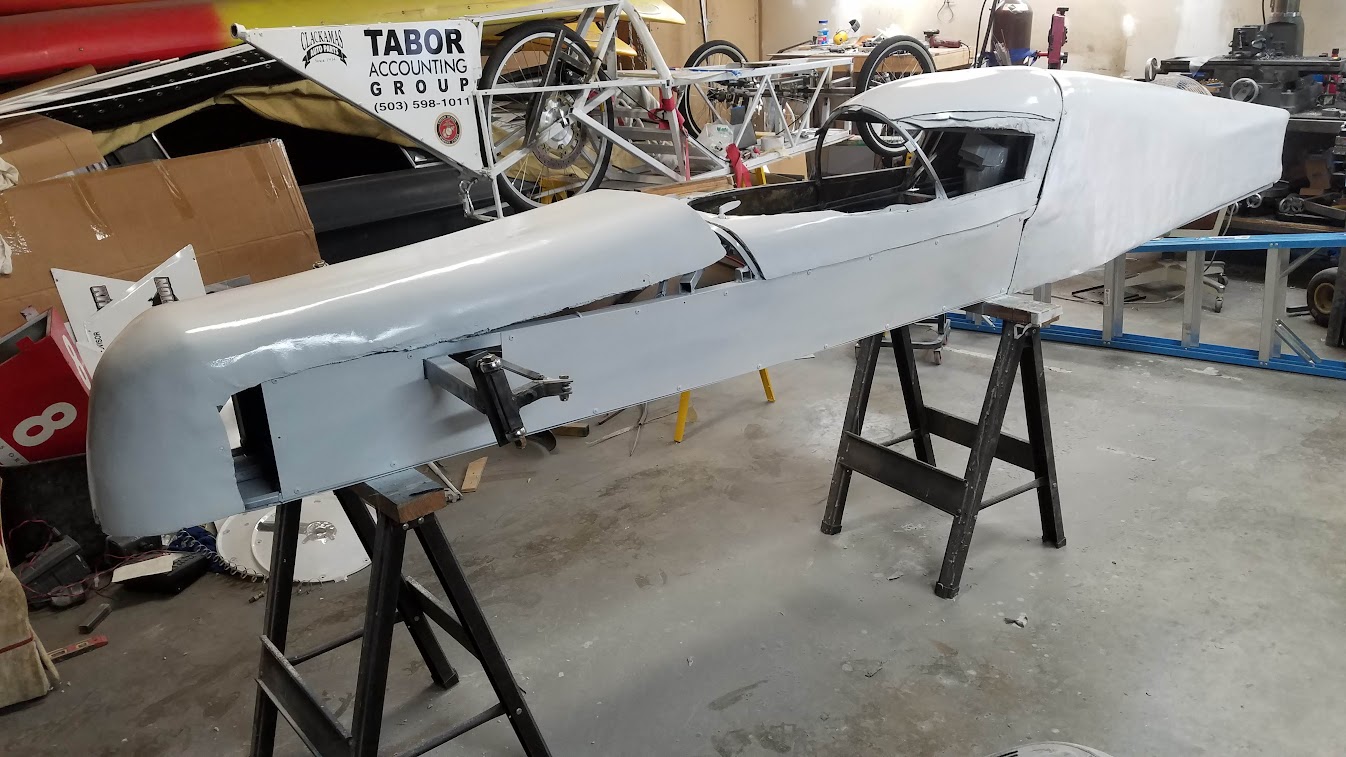 It's a little rough but should get the job done. Strategic decal placement should work a few wonders.

Next up are wheel pants and front axle beam fairings. A little black trim around the windshield, some red accents on the body... Getting close!
F

Supporter
Thanks Kevin. It is really starting to come together.

Based on extremely lackluster performance, I built brakes into the front end this weekend. Still have a few details to tidy up but I think they'll be a welcome addition. I managed to re-install the side windows successfully (yay!) but managed to split the windscreen in two right down the middle when I put it back in. Will be stopping in the morning to get material for another one, but will go thinner for more flexibility.

Overall, things are coming together well though and we will be looking to get out for more testing shortly. Wheel pants, finishing the floor, and a little more creature comfort for the interior are the last big steps, and then finish the livery with some red and then add the sponsor decals prior to the event (yes, they agreed to slander their good names on the car for another year!).

More pics when I get the new screen installed.

Supporter
As promised... Everything went back together. Looking pretty good: 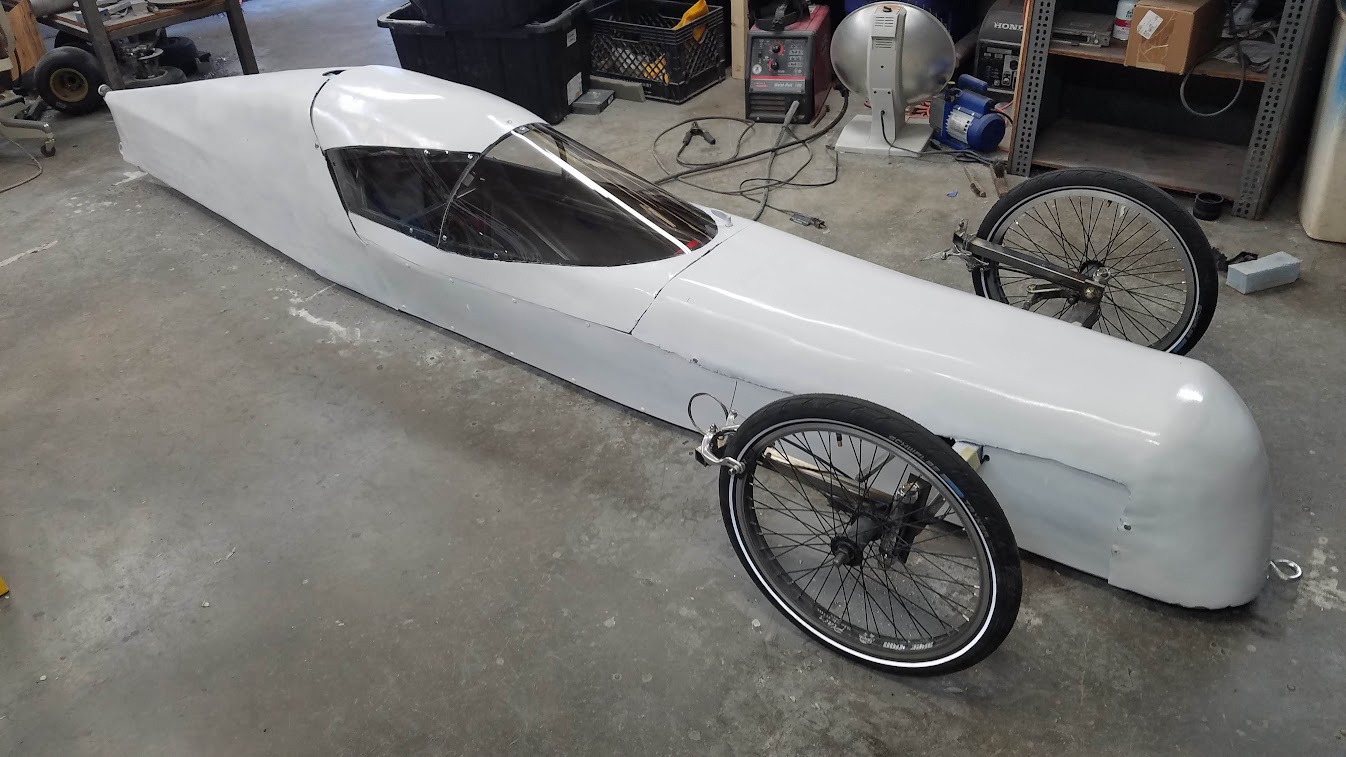 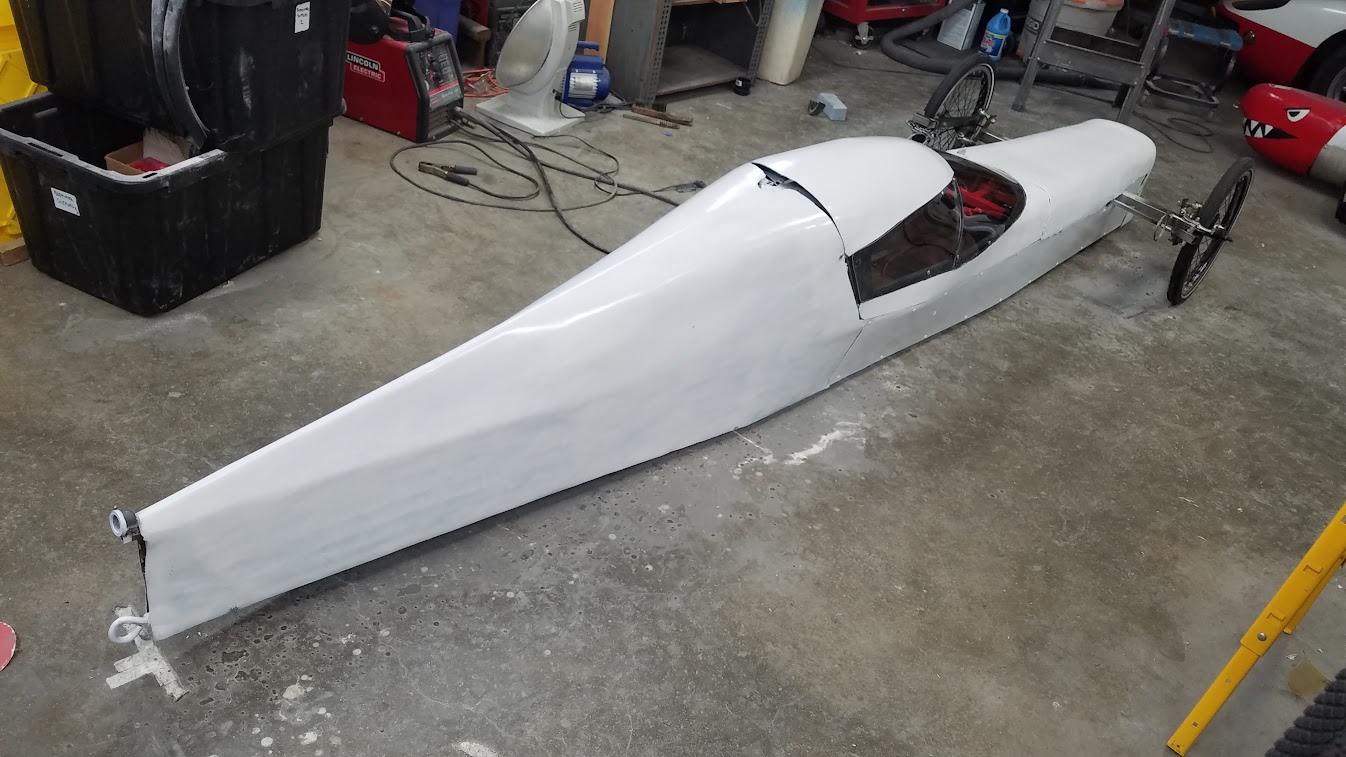 Supporter
Red has been sprayed. This may be all I do on this one. Graphics started: 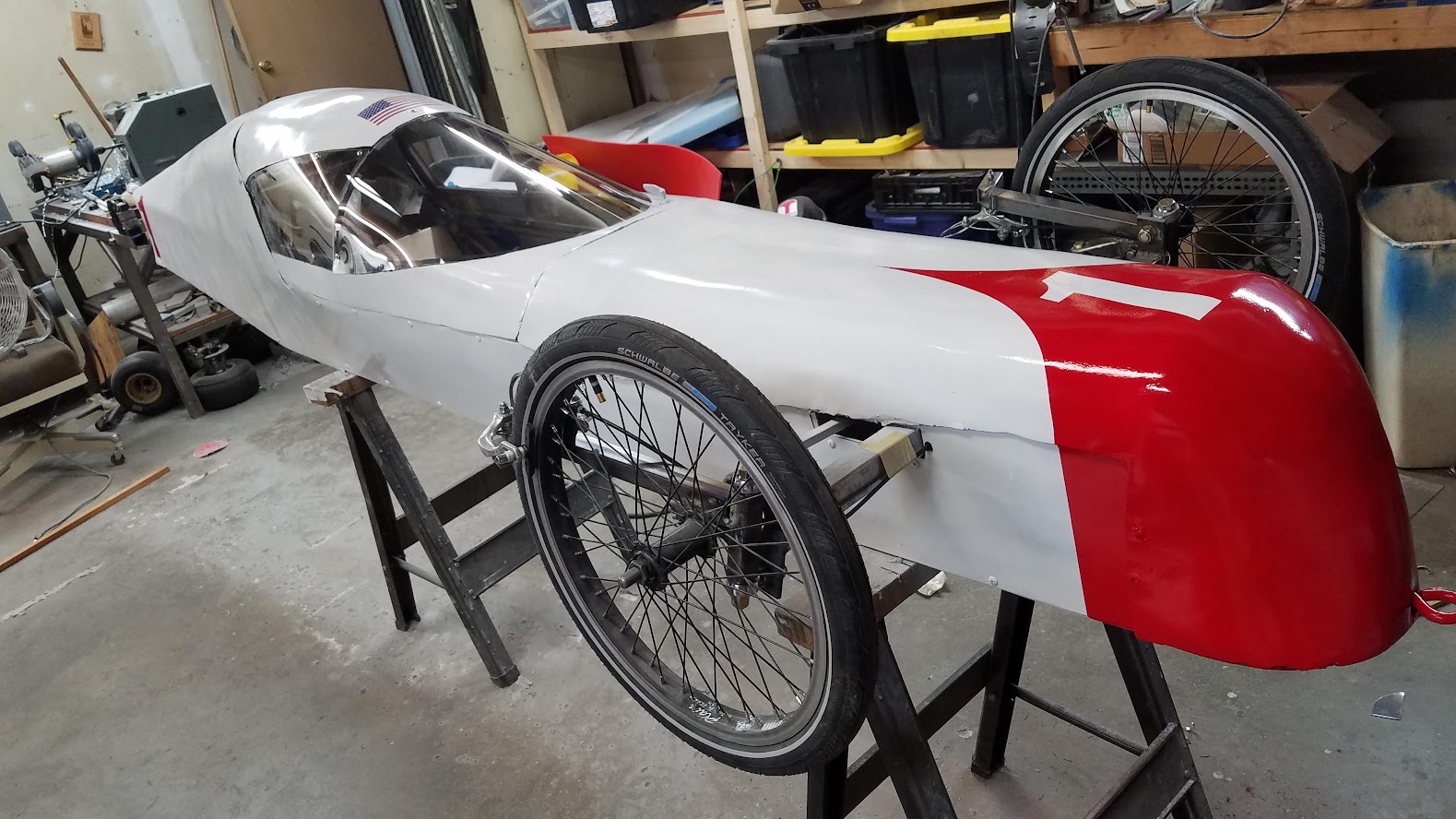 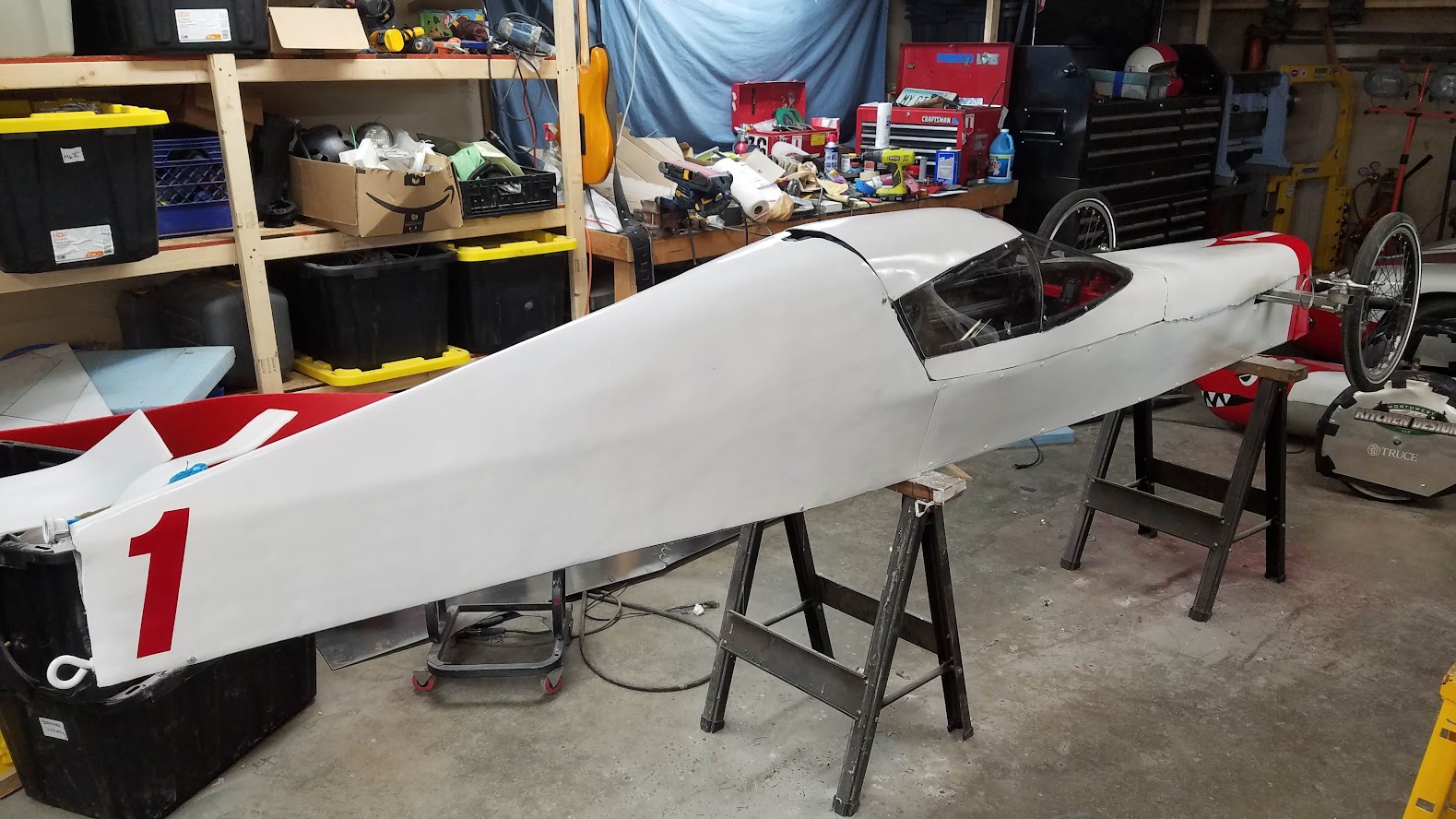 Supporter
And so the second test day is in the books.

Things went well enough, although I had a few tire/tube issues which sidelined me for a while. The Mk II is pretty well sorted out, the Mk VI is fast but probably not an overall contender, and I'm pretty happy with the Mk VII. Nothing really broke all day and everything seemed robust enough, so that's good. I still have some things to do with the VII- alignment, tire change, etc... but it's fairly well ready.

The numbers on the Mk VII weren't quite as earth-shattering as I was hoping for. I ran statistically the same speeds as the Mk V did last year in full body kit- just over 41 MPH on our short, straight test section. Our tape mark from last year (and the year prior) was gone though, and we probably started a few feet lower than prior trials, so there may be a little in it for us.

All in all, it was a good day and it was great to see the cars in a setting other than the shop for once.

The Mk II heading down: 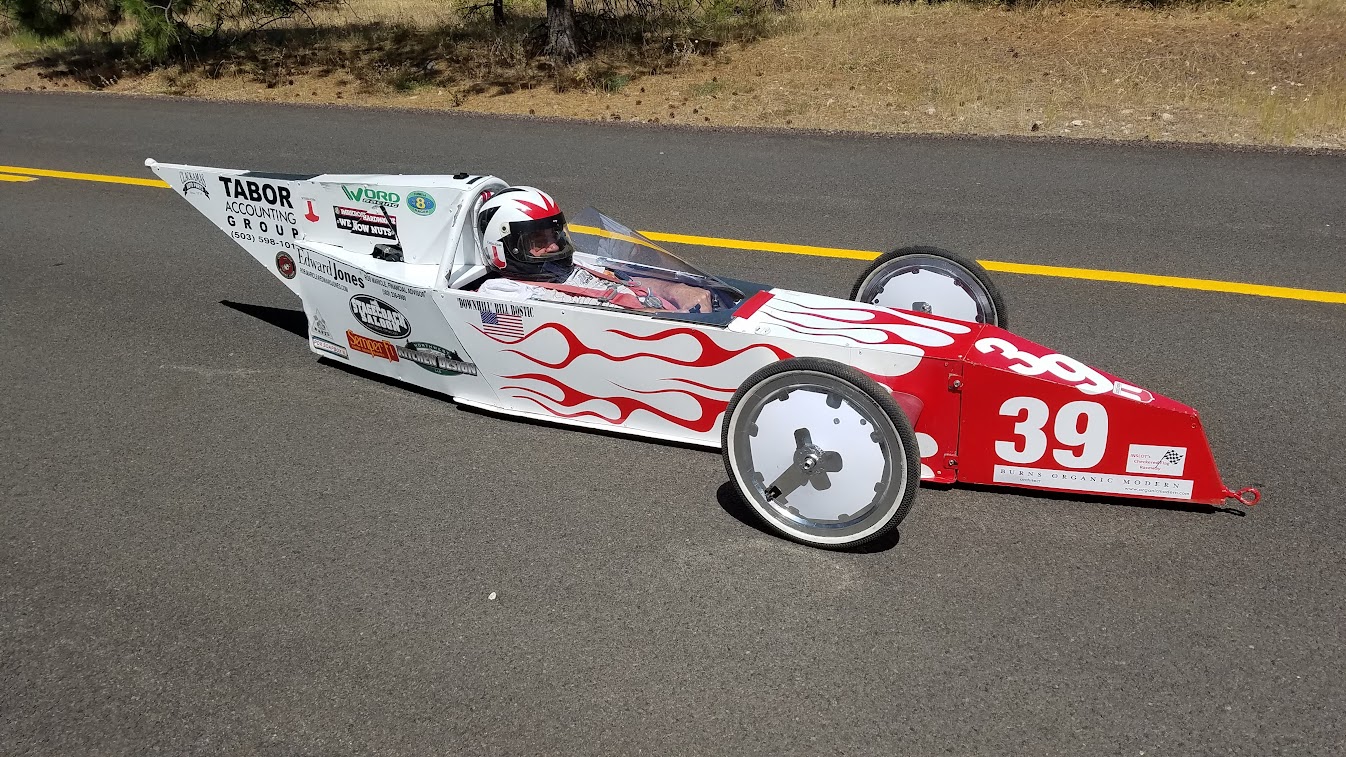 The Mk VI lining up with full balast: 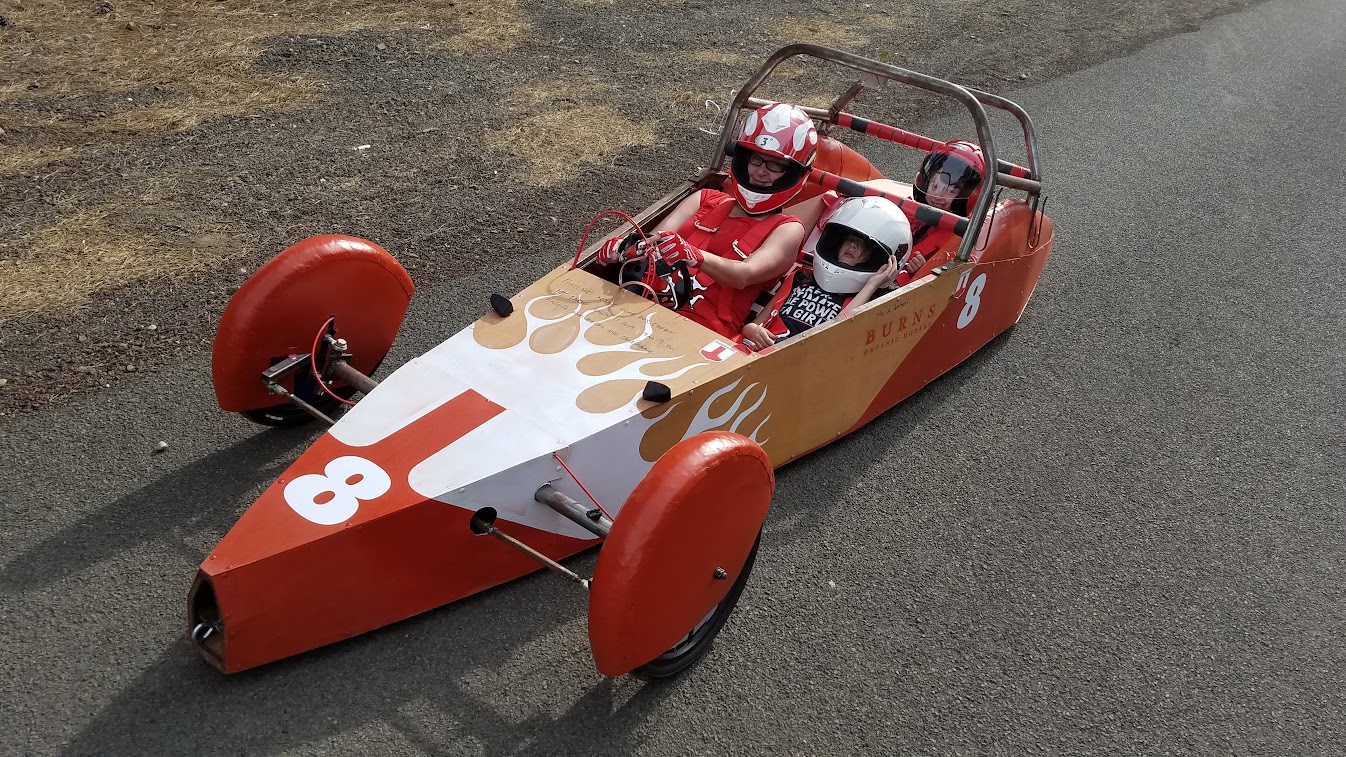 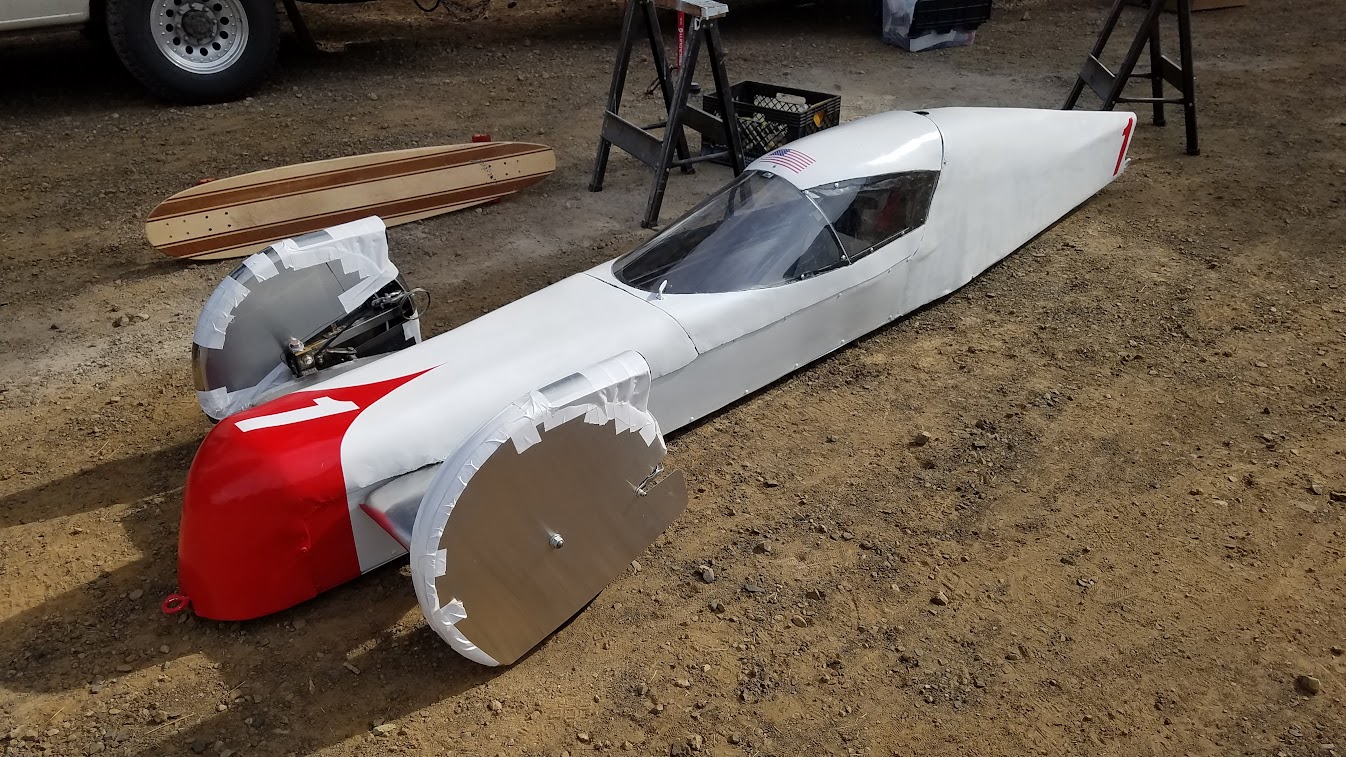 Our pits for testing: 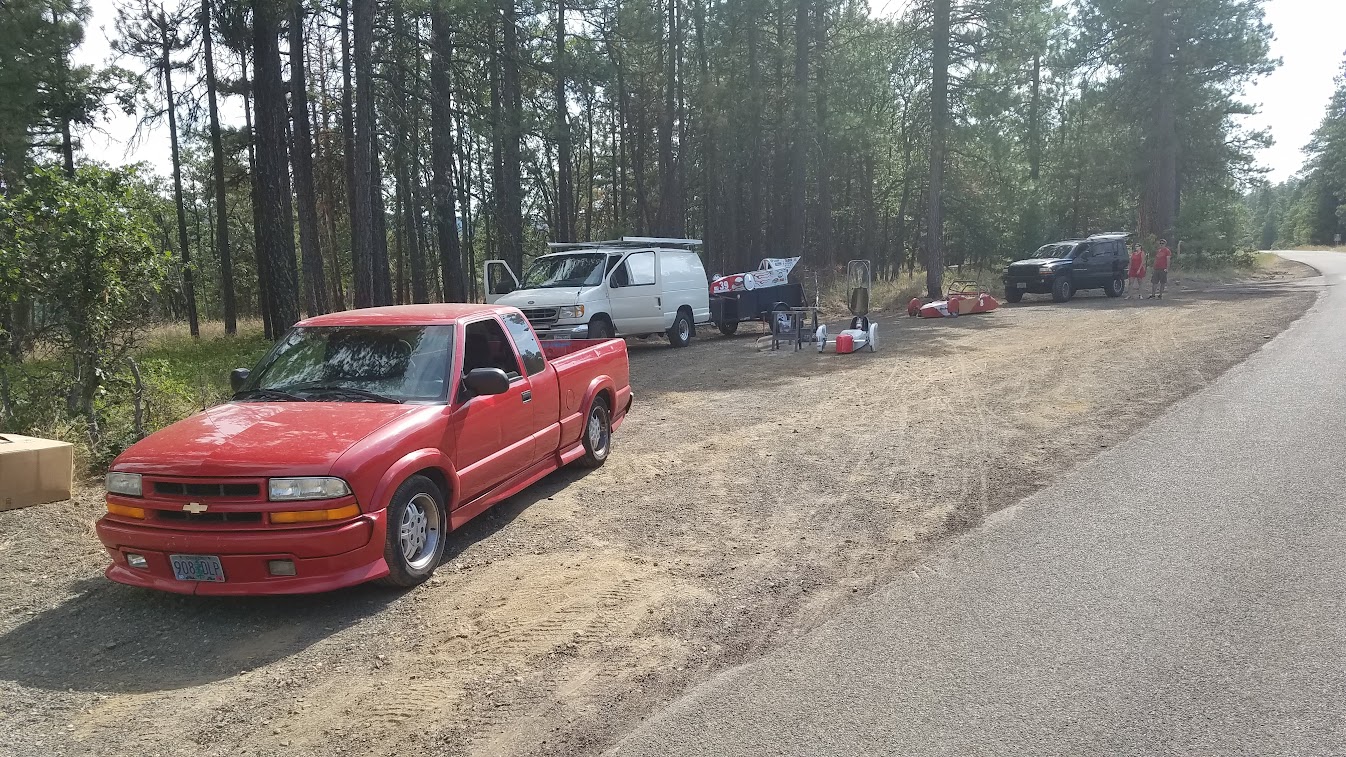 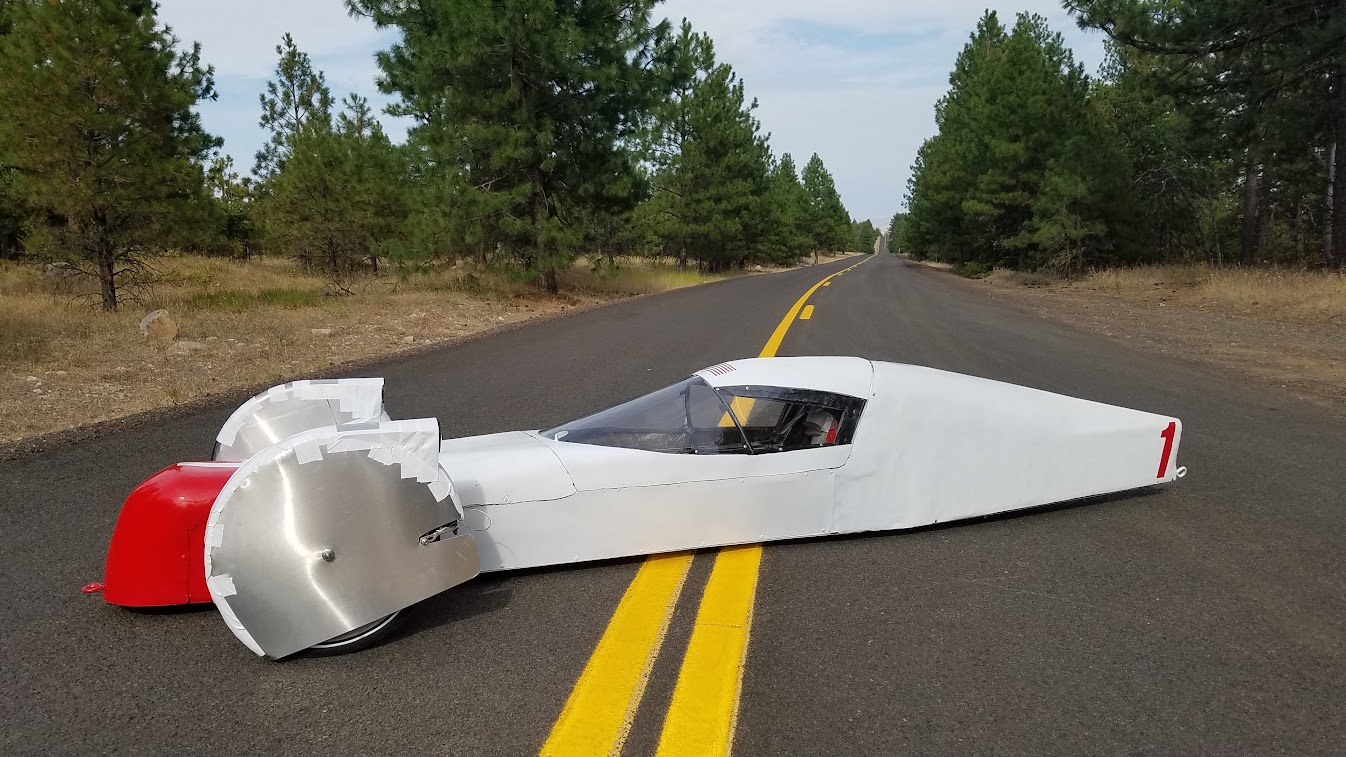 The event is next Sat, hoping for a really fun day! Come on by if you're in the neighborhood and say hi. Pits are at the top of the hill, look for the white and red cars...

Restructured the tail attachment setup due to clearance issues and got it reattached (no pic, use your imagination). Then I re-configured my "dashboard" by moving the brake lever to the top (more, ahem, "interference" issues) and relocating the horn button and super high-tech digi-dash: 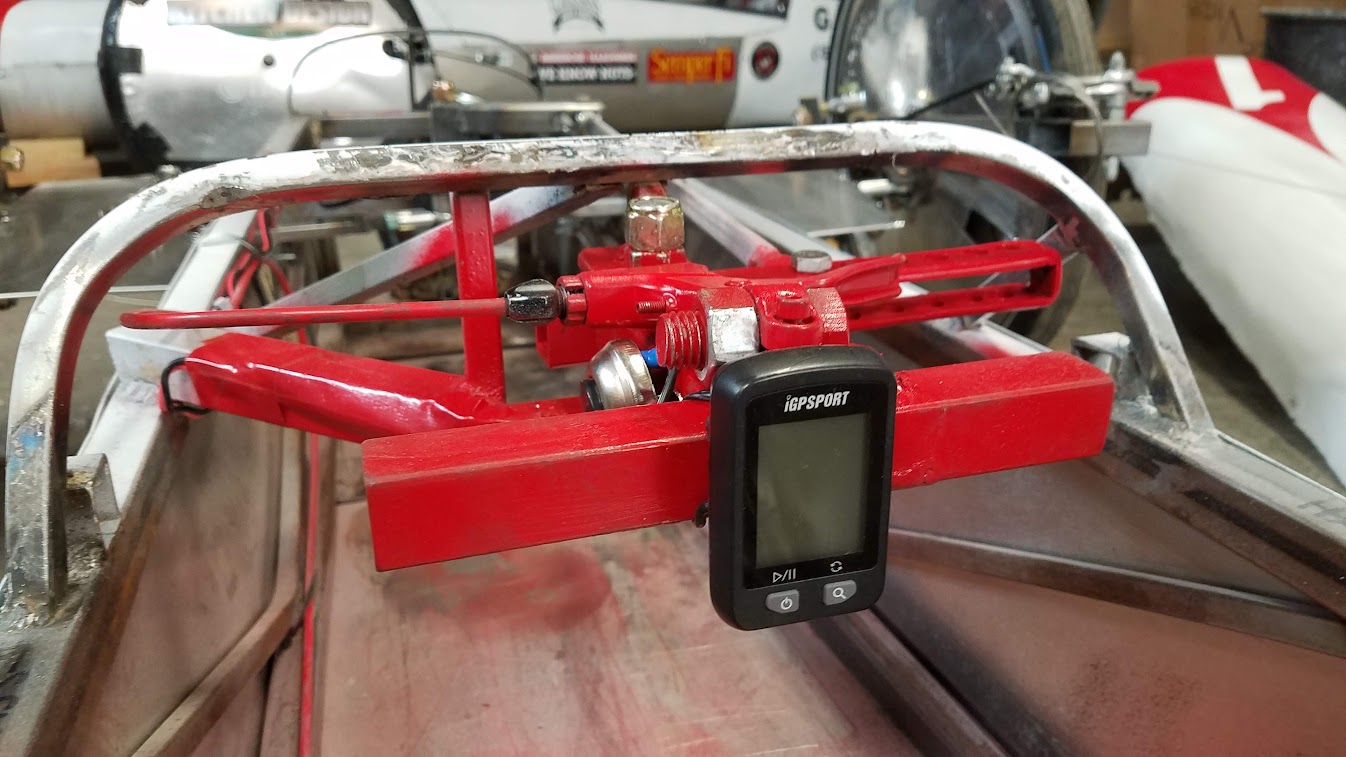 I also machined out my steering bellcrank and put two more holes in it to further slow down the steering ratio as it seemed a little quick at times on Thurs. It's somewhat visible in the background of the above pic.

Then I strung it out and give it an alignment: 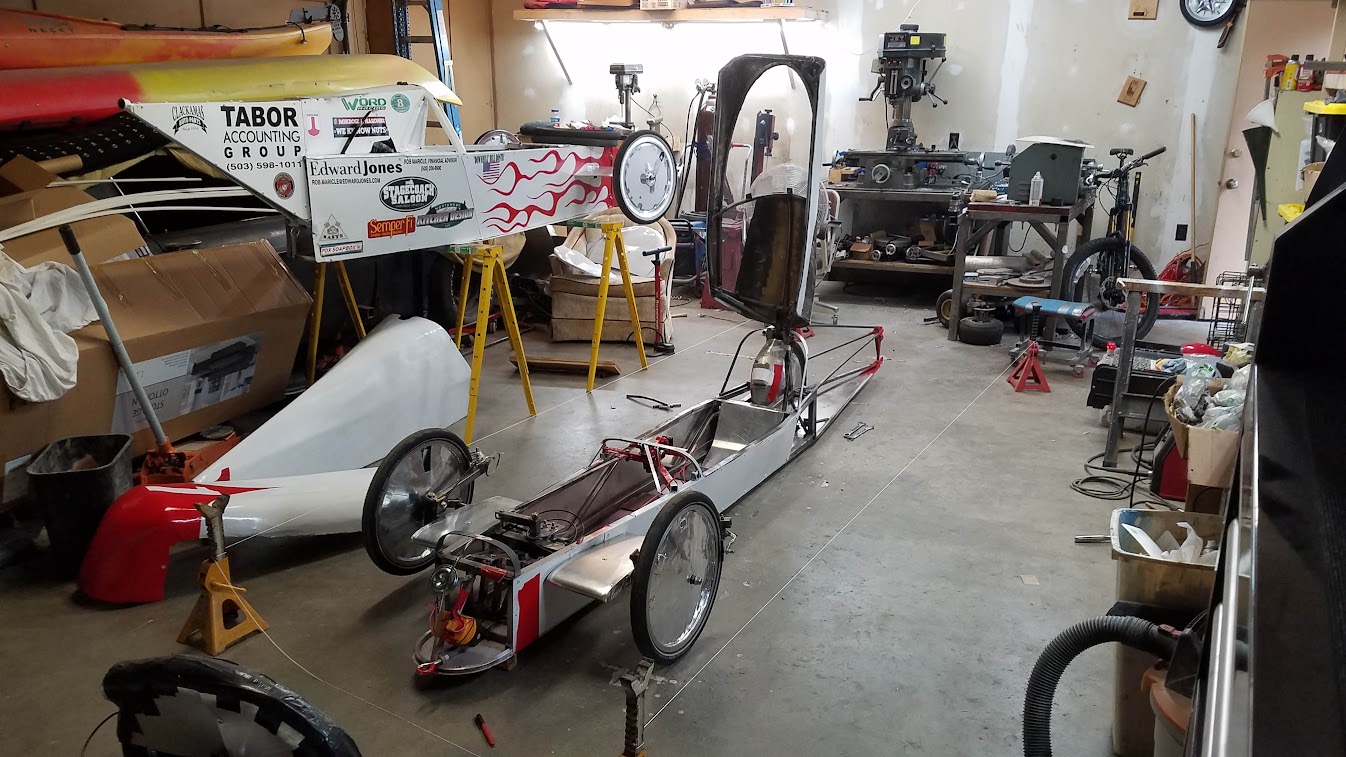 The rear wheel wasn't quite square to the chassis so it probably appeared to be crabbing down the road. I hope this rectifies that.

Supporter
Good luck Chris. Love this thread. Rooting for you!

Supporter
Chris, if your rear wheel wasn't aligned properly it was scrubbing off some speed. You'll probably pick up a MPH or two now.

Supporter
That's the hope Neil. Looking at everything possible to gain a margin on last year's car at this point.

I have a few aero tweaks in mind for the windscreen and wheel pants as well. Hoping to eek out a little more margin. Trying to get a test day in on Thurs but not sure if we can pull it off.

Staff member
Admin
Lifetime Supporter
I could hit the LIKE button on this thread a thousand times....
It is my favorite thread here! Carry on!!!!

Supporter
A little more eye candy for you Randy- all liveried up for testing tomorrow: 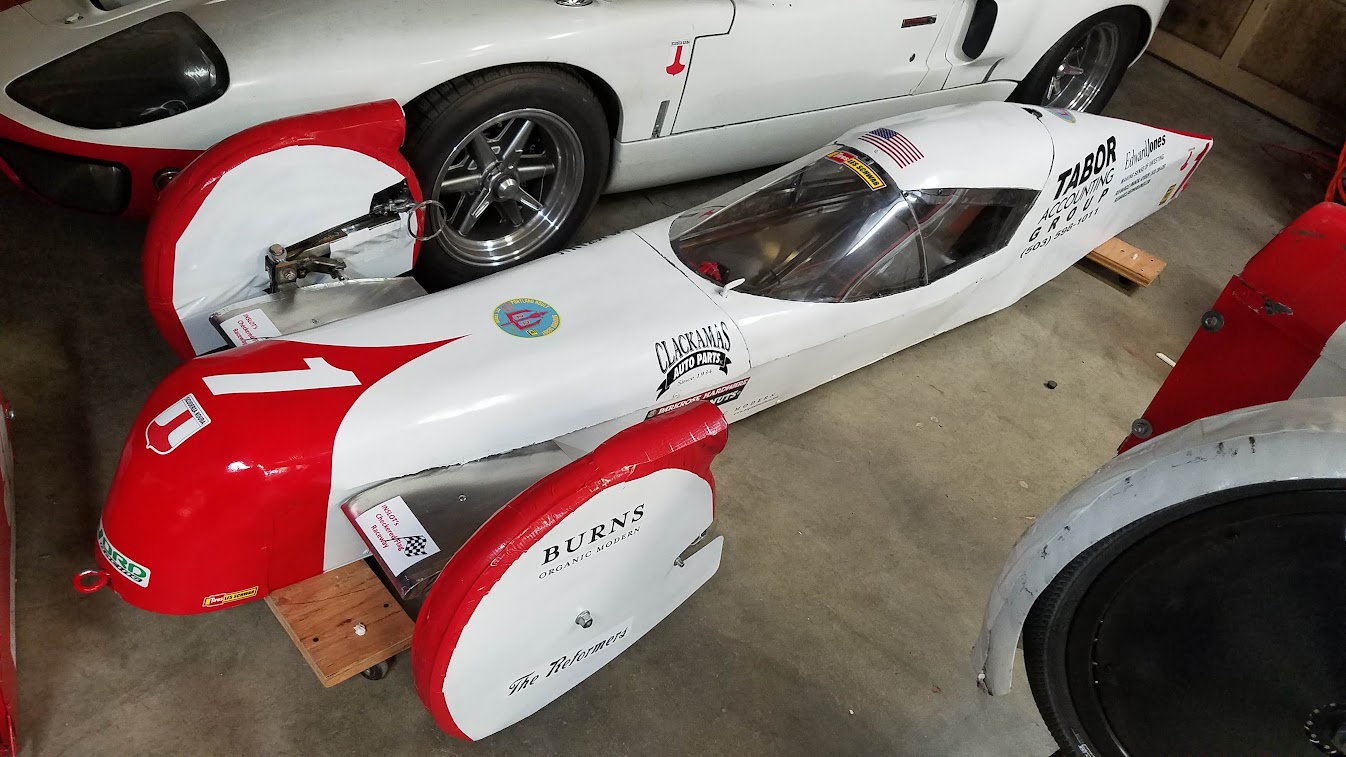 It was just a little too blah on the tail so I added a little wedge of color. Pretty happy with how it came out overall: 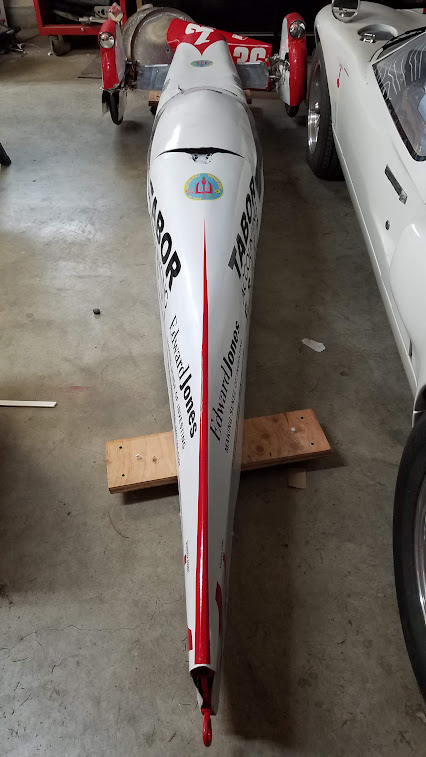 Fingers crossed for some good numbers/results tomorrow. I am hoping for >52 mph if we stay close to town or >43 if we head further out. Not sure we'll see those numbers but it's certainly not from a lack of trying at this point.

Staff member
Moderator
Lifetime Supporter
Best of luck to you Chris. You have spent an Godly amount of time and resources. I hope it all pays off for you.

Lifetime Supporter
Supporter
Looking forward to the write up and confirmation all your had work has paid off.
Looks fast just sitting still!

Lifetime Supporter
I’ll be cheering for you all the way from SW Kansas (but the wind is out of the Southwest at 30MPH, so I’d bet you’re past the finish line before they hear my shouts of encouragement up in Nebraska)!
Best thread EVER!!!

Supporter
It was a fantastic day testing today. We stayed close in to town and used our course which has sweeping turns. 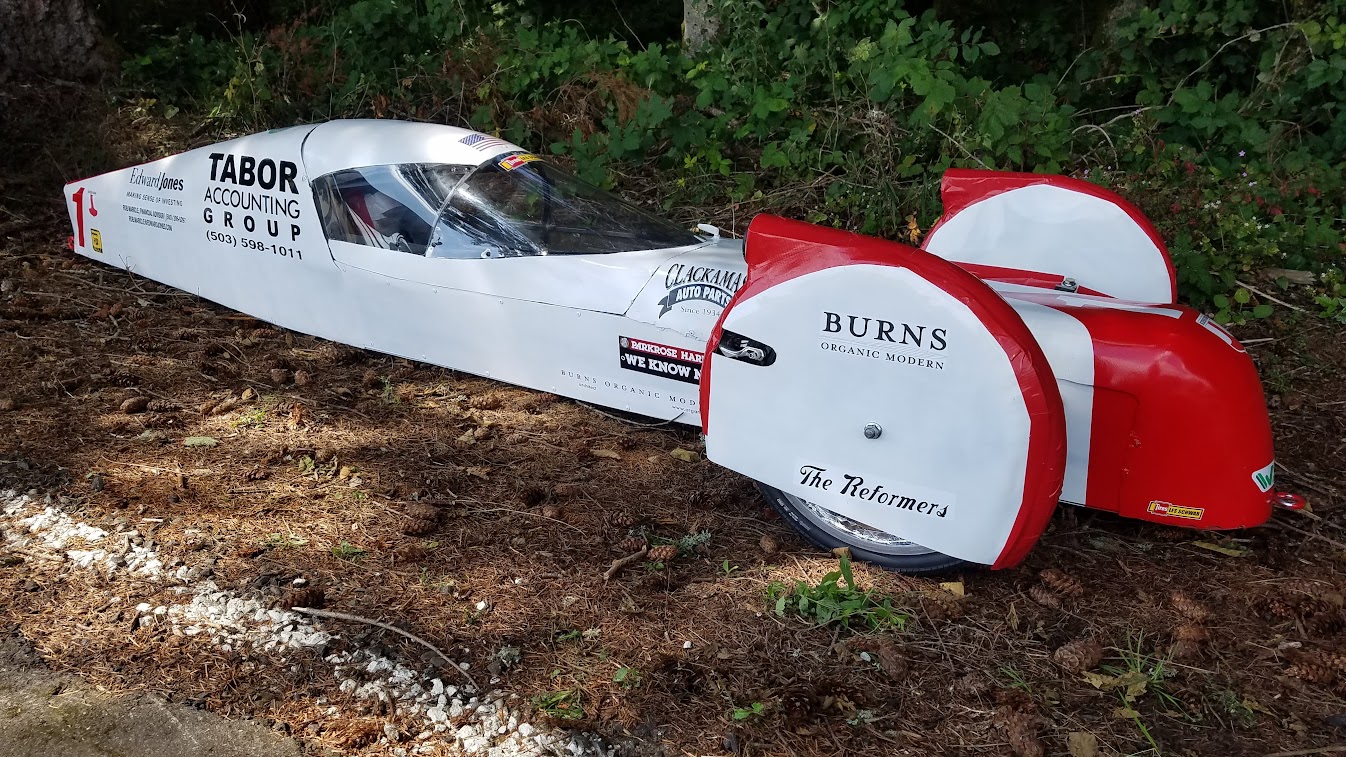 Over the past two days I tore the wheels down, trued them axially and radially, cleaned the bearings, re-balanced the wheels, re-aligned the car, put the spoke covers back on, did a nut and bolt check of the car, finished some aero work, and applied the graphics. First run on the course today had me over 53 mph. Success!!! I did 5 or 6 total passes with the Mk VII and backed that first 53 up with 2 or 3 more, including a 53.4 mph high mark. The other runs were strong as well, with a low of 51.8 and the others in the 52's. Very happy with that, and I think it's statistically valid to say it's marginally faster than the Mk V. It remains to be seen if I can out run it if it's drafting me.

The other good news is that the car was super stable for me on all the passes. It handled extremely well and caused me no drama. It is probably the smoothest and quietest sled we have run. What a car! 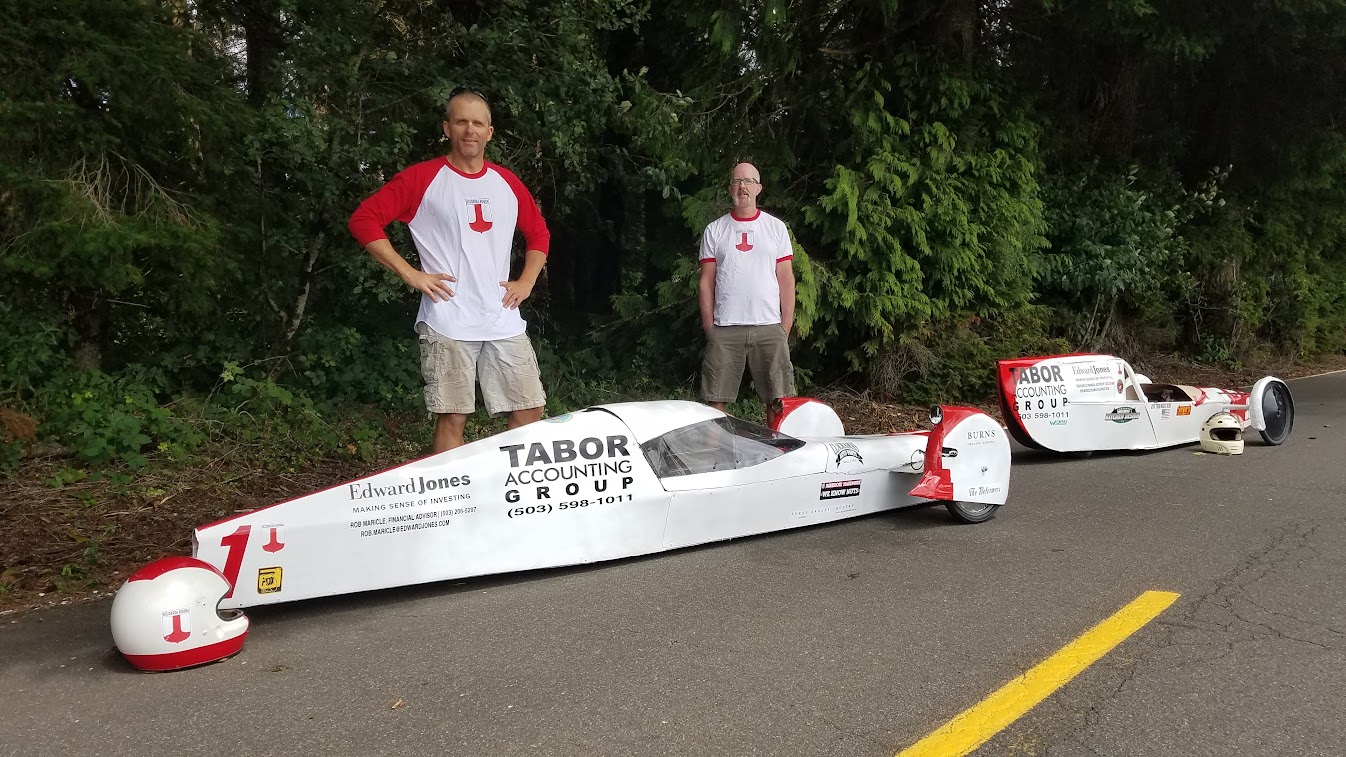 In other news, we are subbing in the Mk I (the original winner) for the Mk II so we pulled that out of retirement and shook it down too. Feedback from Sean and Jeff was that the car is amazing- smooth and handled well but just couldn't quite log the speed numbers that the Mk VII's full bodywork yields. All in all, it should be reasonably competitive.

Jeff prepping the Mk I: 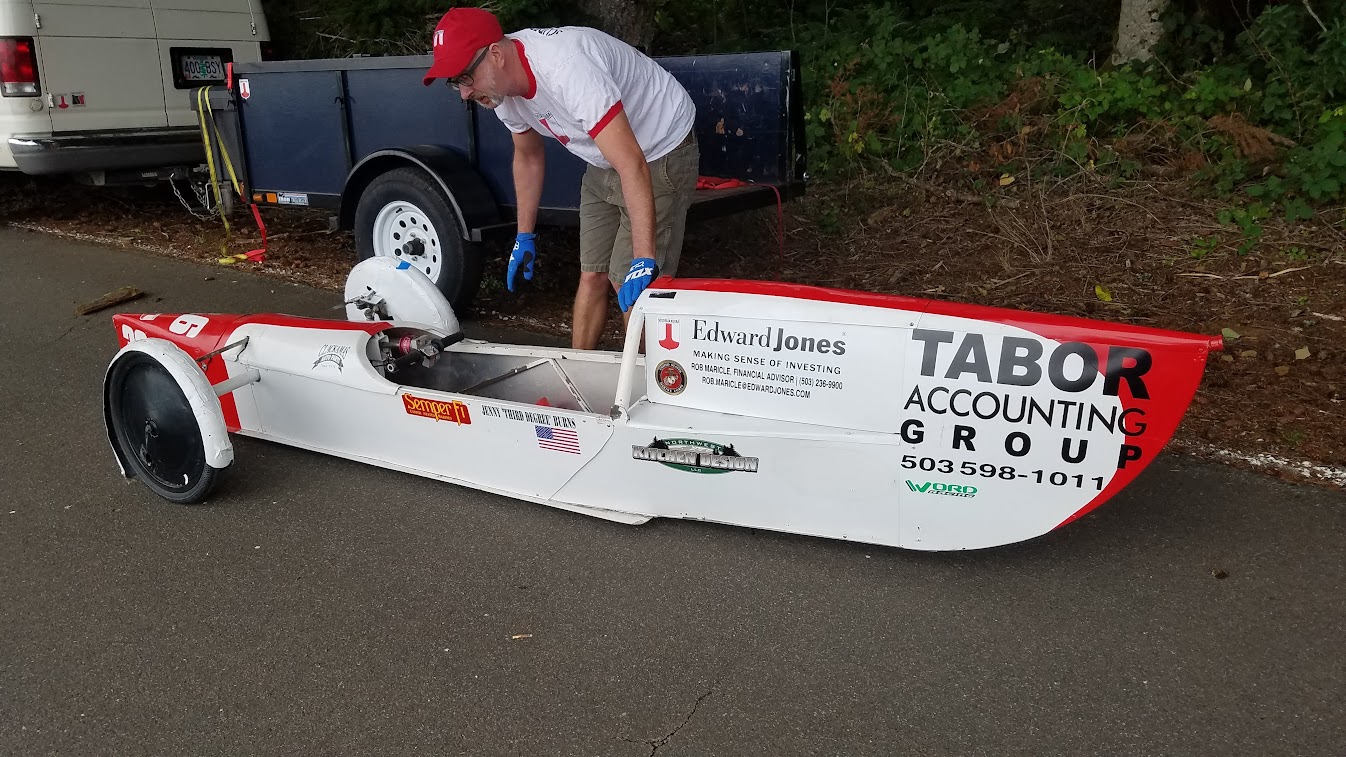 And to close the day, we had to run up to a truck parked at the top of the course. Having not been in the Mk I since who knows when, I had Bill haul me up for a nostalgia run. What a great car! Some minor aero challenge with the open top and taller profile, but it went where it was supposed to and did what I asked of it without tricks or fuss. What a ride!

Still have some follow up to do but pretty well prepared at this point. The heavy lifting is done, time to buckle in and enjoy the ride!

Staff member
Admin
Lifetime Supporter
Hammer Time!!!!
Love the look and stats..... Show us the podium pictures when you get there!
F