Looking for opionions on my frame design.

I have a habit of making things more difficult for myself than need be.. I could just copy an existing frame and be happy with it, buuuut... accepting something as it is has never been my strong suit

I'll also start with stating that my GT40 dreams are not to build a "replica". I love the car for it's stylish lines and history. So the bodylines will likely be the only thing keeping it close to the original (I'm also opting for the less common MK2 body, but with a 50mm widening per side).

Alright. Frame! For starters I'll be using conventional double wishbone suspension in the back. I will probably try to use a push arm suspension setup both front and rear. I'm also using an Audi V8 which is short! Really short, only about 22-23 inches long.. And most likely a flipped Porsche G86 or 96 gearbox (in the model right now I have a flipped 01E wich is close enough for now)

I have let myself be inspired by the Ultima GTR chassis and, the king of ground effects, Porsche 956/962 chassis. Currently I've only played around in Fusion 360 putting pipes between known limits and points. So I'll have to rework everything later on. This in mainly to figure out a concept to work with, and I was hoping that the knowledge in this forum could help find areas where I can use the piping in smarter ways, or to steer me in the right direction with parts that are fundamentaly wrong 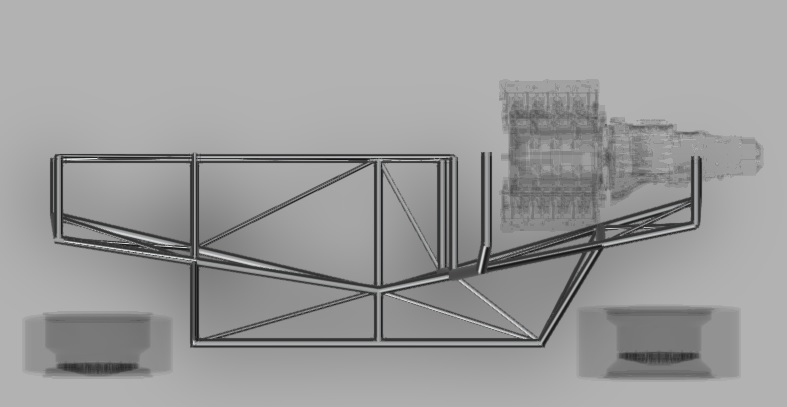 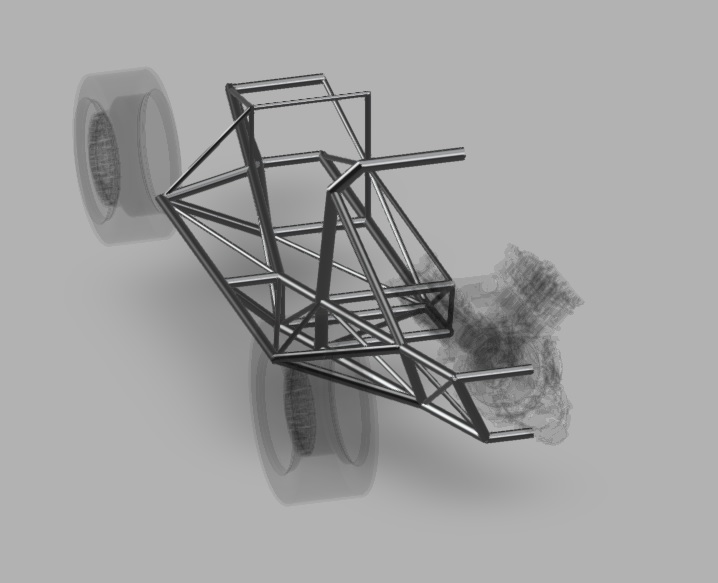 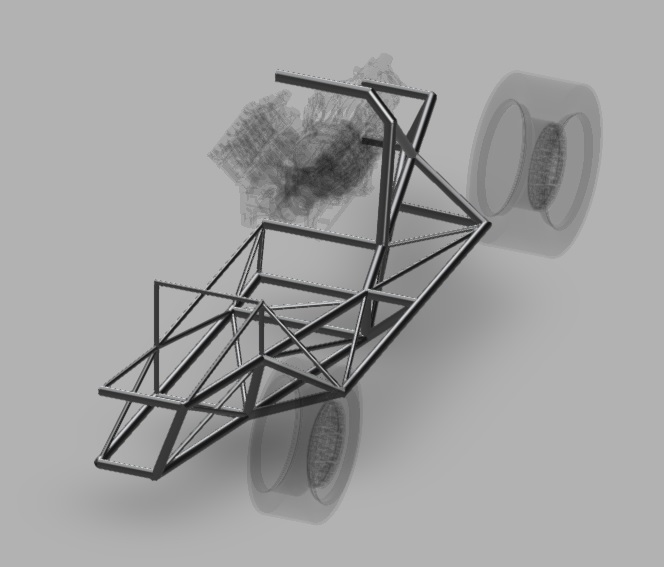 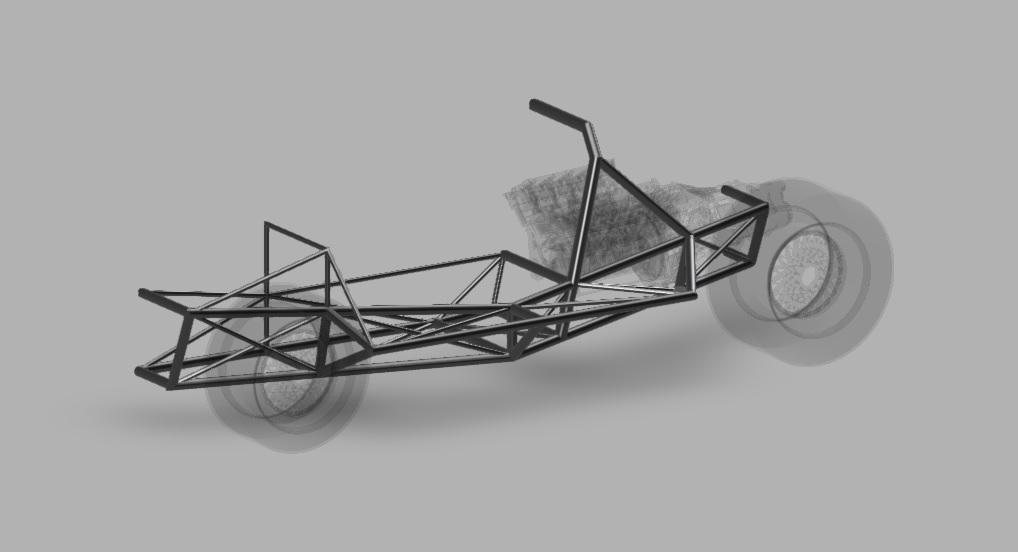 My main goals when doing this has been to create more footwell width, a frame as stiff as "possible", and a frame that is light. It will feature a front roll hoop attached to the rear further on to help with that stiffness.

Design thoughts have circled around using as long straight tubes as possible to minimize welding, and trying to see the chassis as a strong centersection with extras to "fill out" the bodywork (and supply extra rigity). A 962 chassis for example does not have the extra structure over the tanks that the GT40 has that can provide extra rigity. However, the way I have designed this at the moment will probably give me four fueltanks instead of two..

I'm not particularly fond of how the front and rear halves meet and the angle they create. So I will place the upper pipe more parallell to the ground, more like the image below (see green lines). That would also flatten the front half of the door sill. 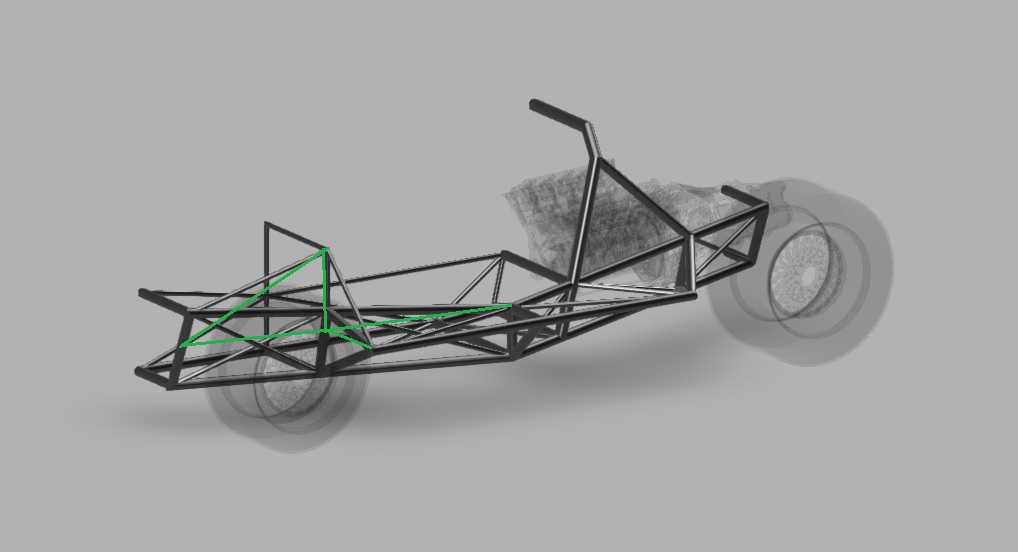 As you can see the frame takes an upward angle from about the middle of the car. The engine and trans is also tilted about 3 degrees to follow this inclination. Not as visible is that the front half of the frame is also tilted downwards (from the front). This is to make room for a front end diffuser. The plan is then to steer the air from the front diffuser out towards the sides. How to get this nice and tidy I do not yet know..

The underside angles of the car are also inspired from the 962 and the reason is to make space for a venturi tunnel that extends as far in under the car as possible. The front aero could just aswell end up being just a nice splitter and a flat undertray but the rear I feel quite happy with at the moment as a concept. 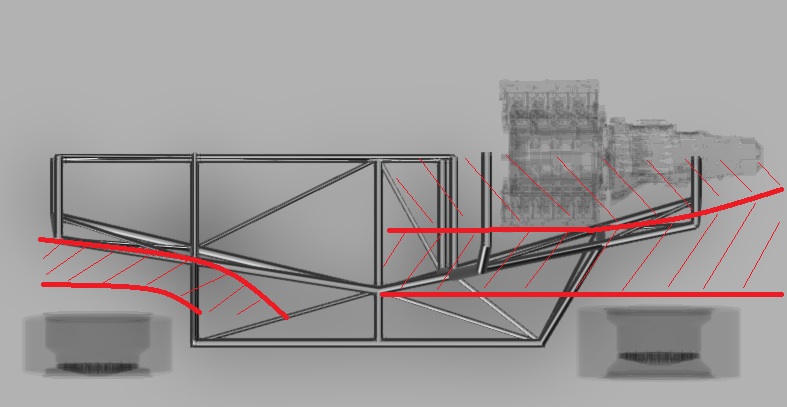 As stated this is still in the early stages. I'm estimating I will need about a year of CAD before I'm ready to start chopping tubes. I've waited to start this project for several years due to the lack of a workshop close by but now that I have a space I can use just a few metres from my door it's finaly time to get serious about this
B

Generally, diagonals will be stressed about the same as tubes that are more orthogonal. Yours look too small.
I don't see any mounts for control arms or spring/dampers. They define how road stresses are transferred into the main structure, and may require structure redesign to optimize the "whole".
C

Some alterations and mounting points for control arms added. I have also placed coilovers where I imagine they might be placed later on.

The small tubing is 20mm as oppsed to the main tubing that is 40mm for the moment. Mostly to separate which tubes are main tubes and which are not. Usually the diagonals can be slimmer than the mains, but probably not by this much 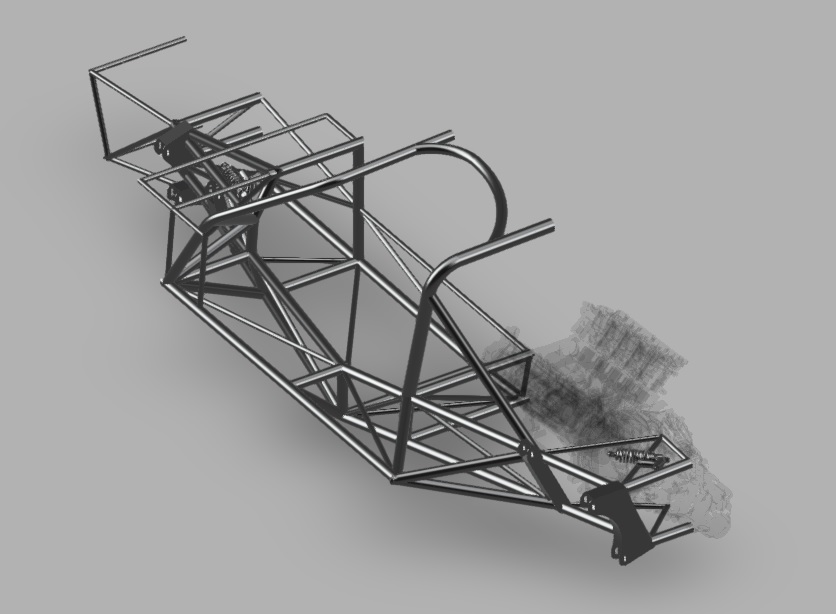 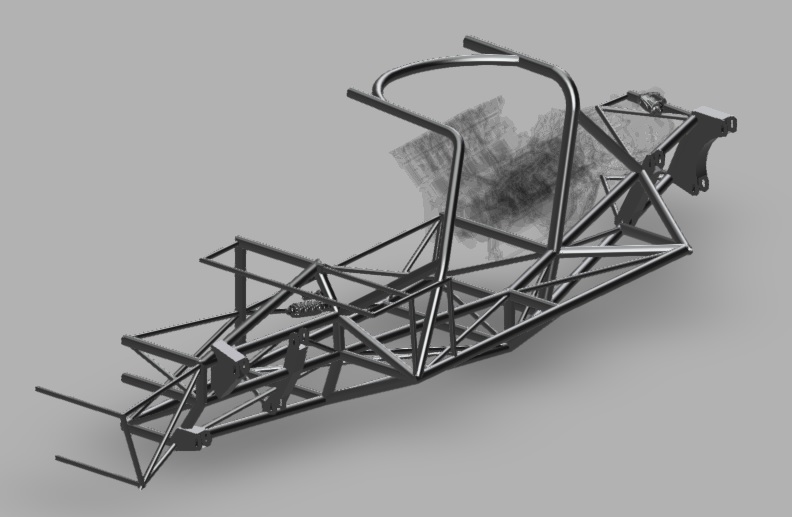 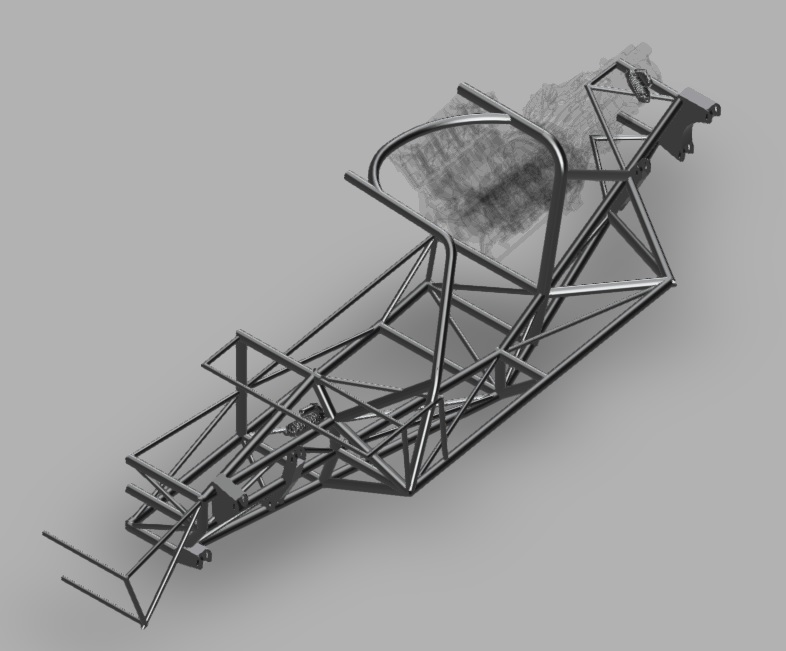 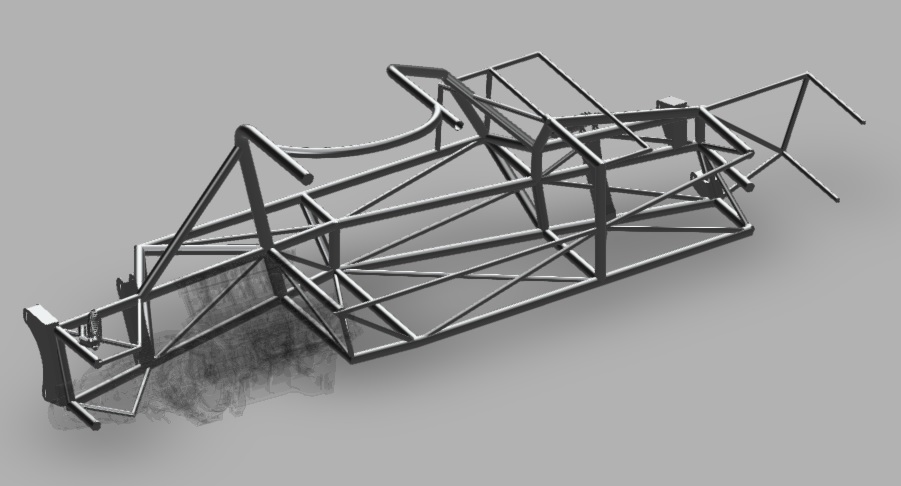 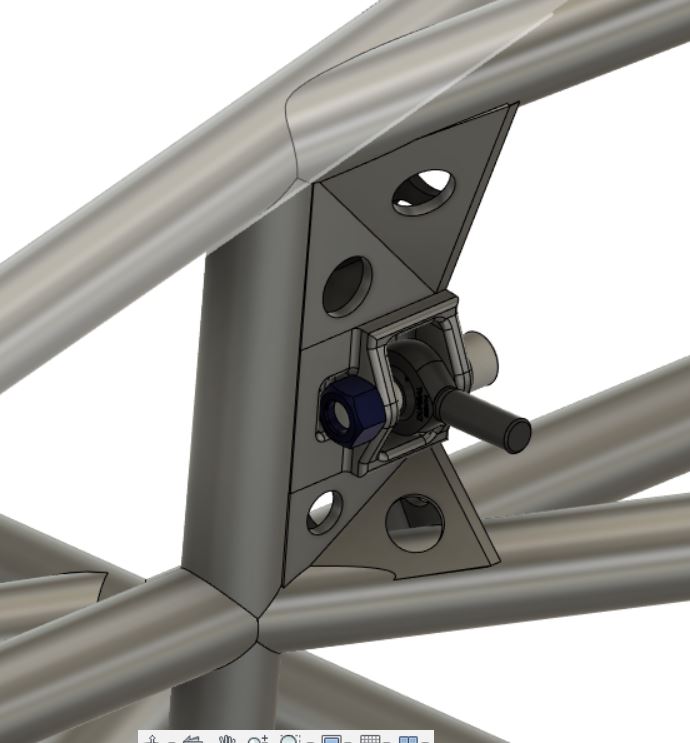 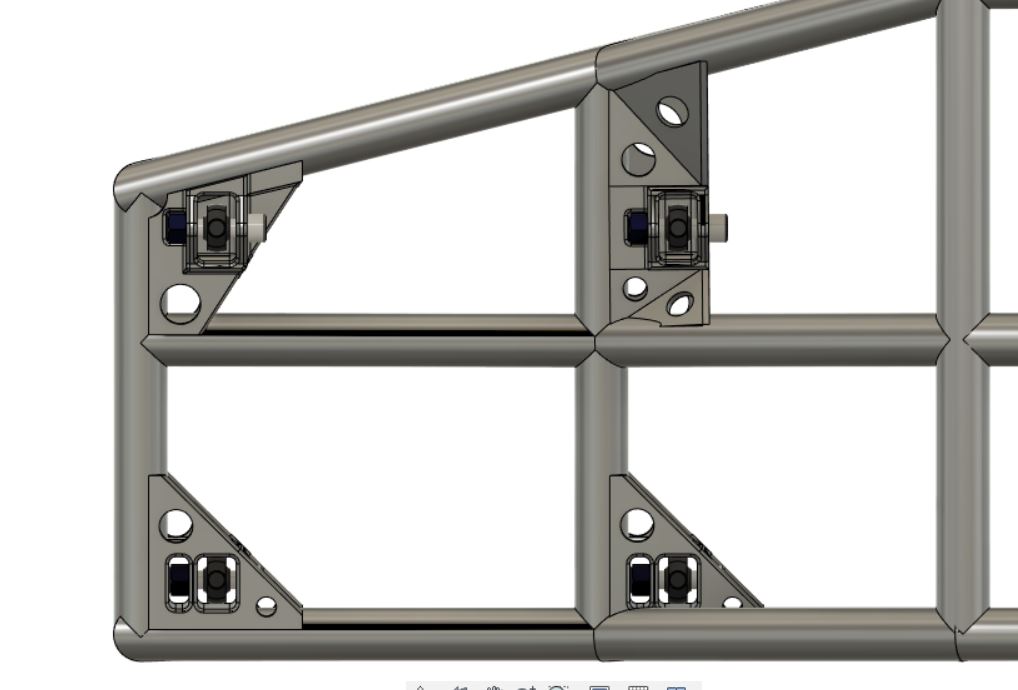 Lifetime Supporter
Supporter
Unless you are really short that centre roll bar/cage is going to be really close to your head.
like do not drive it unless you wear a helmet.

There are threads on here about internal roll cages

Supporter
The curved tube at the top of the roll cage will not be as strong as a single tube in compression but you could butt each side's tube together at the center or add a straight tube down the center.
C

H.J.Bayer: Those where some nice brackets, I might just copy that design a little for a couple of the suspension points

Ian: Yeah I noticed after I had drawn it and open the dummy figure again.. I'm not short, I'm 1.93m or 6f 3 inches. So that will be revised when I start on the real drawings

Neil: the plan is to join the two top tubes with a dimple died gusset. Bending them like this (but with better head room) and a gusset should be stiffer than just a straight pipe.

As previously stated. I'm just messing around with tubing for the moment. Getting a feel for what could work and what might not work. For instance the suspension points are not adjustable in these drawings. The aim is to have them adjustable atleast 20mm in total up and down.
I'm not happy with how the front rollbar connects to the chassis, I would like to connect it to the top structure behind the dash in a good way. But as the tubing go at the moment I'm not getting a nice triangle there.
The upper front, rear, suspension point needs better bracing from the chassis.
The upper front, front, suspension point should also be better braced or positioned further forward to better move the forces into the chassis.
Both rear, rear, suspension points needs better bracing or the rear geometry need to be revised in order to move the points inward.
I'm not happy with the rear coilover position either.

The reason for this topic was mostly to get opinion on the concept. I'm not dusing the usual three flat boxes design but more of a double triangle and trying to design a chassis that will allow a much more aerodynamicly advanced underside of the car than the usual chassis. Most GT40 replica chassis are pretty square, the original was more of two triangles and a center square. I might be way out of bounds trying this approach or I might be on to something good..

Supporter
"...the plan is to join the two top tubes with a dimple died gusset."

That's what I meant by "...you could butt each side's tube together at the center..." Sorry- drawings are much better than my verbal descriptions.
4

Hi Johan. How are you travelling with your chassis design I am about to start my GT40 build and coming from a drag car/ bike chassis building back ground am also planning on building a round tube chassis. I'll be keeping an eye on your project.
B

That looks like an interesting project. I look forward to seeing the completed car.

Have you figured out where you're going to put the fuel tank(s)? Usually they're in the sills (slid in from the front wheel wells).

1st, select a gearbox that can be flipped thus lowering the engine significantly.

3rd, move the engine as far forward as possible in the chassis. A couple of inches can be saved with an electric water pump and a good front dress plan.

4th, remember that you must have a completely flat underside from the nose all the way to the entrance of the diffuser for it to do much of anything. This can be quite difficult to achieve when you begin to mount seats, peddle boxes, and all the other things that require nuts on the bottom of the floor. All those nuts will create a lot of turbulence and it doesn't take very much to disrupt the airstream under the car to the point that the diffuser efficiency is ruined.

5th, cooling....... sealing the bottom of the car creates a pretty big problem. Unless you add some inlets to the bodywork I don't believe that you will be able to flow enough air through the engine room to evacuate all that superheated air being generated by the exhaust system. Ceramic coating is a must just to start as well as a big oil cooler and proper ducting to exhaust the hot air coming from it out of the engine room. A comp[letely sealed radiator duct system is a basic requirement IMHO. Especially an exhaust side duct that vents out the top of the nose and over the top of the car.

6th, suspension design....... The longer you can design the lower a-arms the better the entire suspension system will be when completed. I think a GT40 can be improved at the front by trying to narrow the nose chassis extension somewhat so as to lengthen the a-arms. The radiator can then be hung out on the front of it and airflow can still be ducted efficiently. A couple of inches narower here will add a lot to the whole design. At the rear I would get rid of the trailing arm design and go with a top and bottom a-arm system. Place the shocks inside the chassis rails and drive them with a pushrod/rocker. This will allow you drive them at 90 degrees through the rocker system, much better. Do the same at the front and you can ellimate all of the spring rate challenges created when laying the shock over at a angle less than 90 degrees in the traditional location.

Remember the chassis's only job is to locate the parts in their most efficient location. Then the Aero system can be addressed. A GT40 creates quite a bit of lift with its traditional body shape, especially at the nose. If you are willing to forgo tradition then you will need to design in a splitter, lay down the radiator a bit more and flaten the nose between the wheel arches somewhat. Without a spiltter etc. the rest of the underside aero is a waste of time IMHO. The inhearant lift created by the GT40 body shape was its biggest design limitation. The racing world would very quickly learn these things and by the end of the 60s racecars all became airplanes with four wheels running on the ground.

Also when you design triangleulated boxes the boxes should be as square as practicable. Long retangles should be divided into two smaller squares and individually triangulated when possible.