Came across this nasty video. Jim Pace is a name well known in these parts I think, I've watched plenty of his driving videos. Just goes to show that these cars need a LOT of respect.

Admin
Lifetime Supporter
Wow... He got very lucky....
Looked quite similar to the blow-over at Road Atlanta a bunch of years ago.. Perhaps drafting up the hill with a rear weight bias car and lots of HP on tap is not such a great strategy?
S

I gather can-am blow overs are not an unknown phenomena, though I have not found many anecdotes about it. It's wise to remember these cars were designed before the issue was really understood, and a 1500-1800 pound car like this is especially sensitive to air under the nose. On a related note, I seem to remember New Jersey motor sports park has a slight hump on the main straight, I recall seeing a Daytona Grand Am car getting the front wheels off the ground there in relatively free air, have to think that could launch a car like the Shadow.
M

The Bennett brothers normally drive those cars. One of them blew over at Laguna Pre-Historics (last year?) with the driver (not to mention the car) had some period of recovery time. Jim Pace is a vastly experienced Can-Am car pilot, it's kind of odd that HE would draft up that straight knowing the history of Can-Am back flips. Especially in the light of one of those two cars did just that very recently.

Amazing luck if you want to call it that. A good straight to recover on. I bet he wondered if it would ever quit sliding to a stop.
M

Jackie Oliver back flipped a Shadow MKII following (Dan Gurney?) over a crest at Jt Jovite (sp?) back in the day. Wrote tub off. When he got back to the pits with a bit of a limp he reported to designer Peter Bryant that "I bent the car". Peter retorted that "You could have at least broke your leg" once he found out how "bent" the car actually was.
J

Jack Ondrack, the guy who owned/raced the TVR out here in NZ ran a older IRL car at Road America.. he was telling us about one part of the circuit where you had to be either over or under a certain speed, if you were in that 'grey' area between under & over there was insufficient aero to get the car to turn in to the following curve. Guess that speed varied with car type and the disturbed air coming off that front car would not have helped.

spud said:
I gather can-am blow overs are not an unknown phenomena, though I have not found many anecdotes about it. It's wise to remember these cars were designed before the issue was really understood, and a 1500-1800 pound car like this is especially sensitive to air under the nose. On a related note, I seem to remember New Jersey motor sports park has a slight hump on the main straight, I recall seeing a Daytona Grand Am car getting the front wheels off the ground there in relatively free air, have to think that could launch a car like the Shadow.
Click to expand...

Spud, I think the first driver to flip his car over was British driver Hugh Dibbley (sp?) back in the '70s. For a while it was known as "doing a Dibbley". The Can-Am cars were particularly sensitive to this type of behavior since they had so much torque on their rear wheels under acceleration that they would raise the nose of the car. Topping the crest of a hill made the situation worse and with the wide, flat bottom of the car, going past the point of no return made it fly.

A friend had this happen to him at Bonneville a few years ago. His Bocar yawed slightly at over 200 mph and the lift on the nose that created pulled the whole car thirty feet airborne. He survived that accident but spent time in rehab.
S

^ so that got me started with a new search - 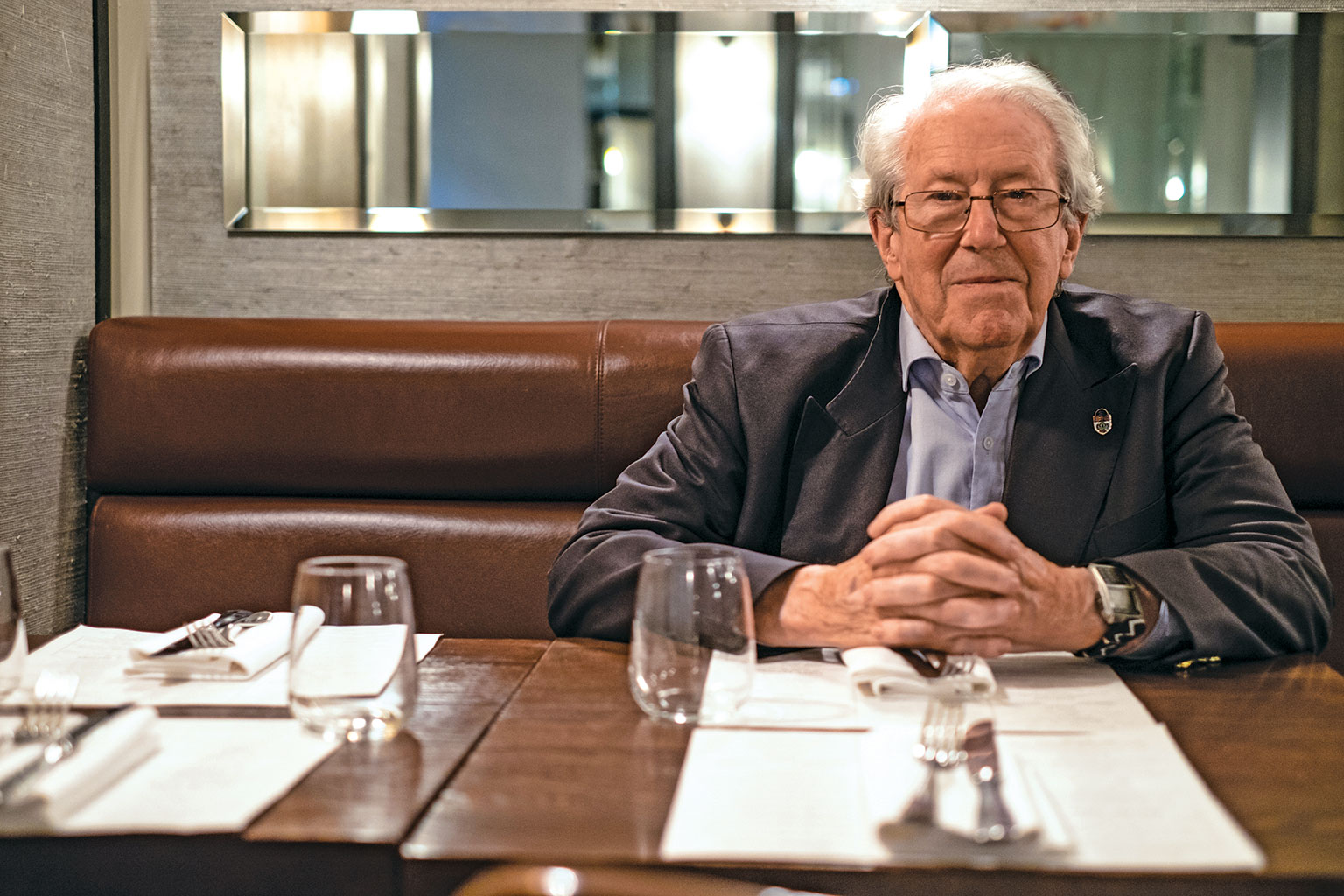 He was part of the 1960s jet-set, rubbing shoulders with Clark, Moss and Stewart before becoming a manufacturer. Despite all that, he only ever regarded racing as a hobby

Having been airborne in my Cobra racecar - I cannot begin to tell you how traumatic it was to my psyche and confidence as a driver. I had nightmares for years following that crash even though I forced myself back into the seat a month or so later to race the car again and re-establish its pedigree as a champion and me as a driver. The Cobra was sold and I never got back into an open cockpit car again.

Here’s the story that you knew would accompany my preface::

It was the spring of 2006. I was running a NASA race at BIR (Brainerd International Raceway) on the original track configuration.
The front straightaway was roughly 4800’ long. The Cobra entered that straight at roughly 80mph and then hammer time. Turn 1 was a long-right sweeper that we were able to take flat out. GPS Data Acquisition had our speed at 154mph. I turned the car to the apex of T1 like I had done hundreds of times. Coming off the apex, I could hear my aluminum splitter extension scraping on the track as I was drifting off the apex.
Our tires were up to temp, the car was “perfect” and I figured the splitter would just self-clearance by grinding off the excess..
We were on target for our fastest lap of the qualifying session.
Still drifting and just about to the point where the drift would arrest itself when suddenly at about 18” from the left edge of the track - the splitter decided to jettison itself. The left front wheel ran over the aluminum strip and lost traction.
We were just under 150mph as we shot off the track into the soft sandy field (full of gopher mounds) and I knew the car would roll if I could not keep it straight.
I was in for a ride I will never forget.
I struggled to keep the car straight when suddenly I was surprised by a rise in the terrain which was an old access road. I hit that road at right angle to it and it became my launching pad.
D-A system had me at 147mph when we went airborne.
He went nose high and the trees of the forest ahead of me disappeared and all I could see was blue sky and all I heard was TOTAL silence...
The car flew just under 100’ until we slammed back down tail first and bounced back into the air for part-2 of our flight. 48’ that time and landed flat... Still doing 90mph the sounds were harsh and frightening as I fought to keep him straight although to go straight meant hitting a marshy swamp, and then the forest.
I managed somehow (thanks God) to keep it straight. The car skipped like a flat stone over the swamp and the blasted into the first big tree.
We went from 70mph to zero in 23”. That was 23” of radiator, oil cooler and fiberglass body and steel supports that collapsed while absorbing what it could of the impact. The tree did not move with the 2500# impact of my racecar and I.
My glasses came off my face and one of the bows was in my mouth.
Ears ringing and somewhat in a daze, I managed to figure out I was still alive and was in my racecar.
I quickly realized that my Bell Helmet, HANS Device and Pyrotech Harness saved my life. The harness was so tight at the beginning of my session that I could barely tuck in the loose ends of the harness to keep them from flapping in my face.. It had stretched to the point where I could literally slip them off my shoulders.
While it seemed like an eternity, I was probably standing alongside my crushed and smoking racer in less than 15 seconds.
I thanked God for allowing me to be one of a handful of people to have ever flown and crashed a Cobra and lived..
—
The damage to the chassis was substantial, but repairable.. The steering wheel was a write-off. Even the half full fuel cell in the back of the car survived although it had strained through its mounts and formed itself around the differential.. Fiberglass has a really good memory (springs back) and photos don’t even come close to telling the story that lurked underneath..
. 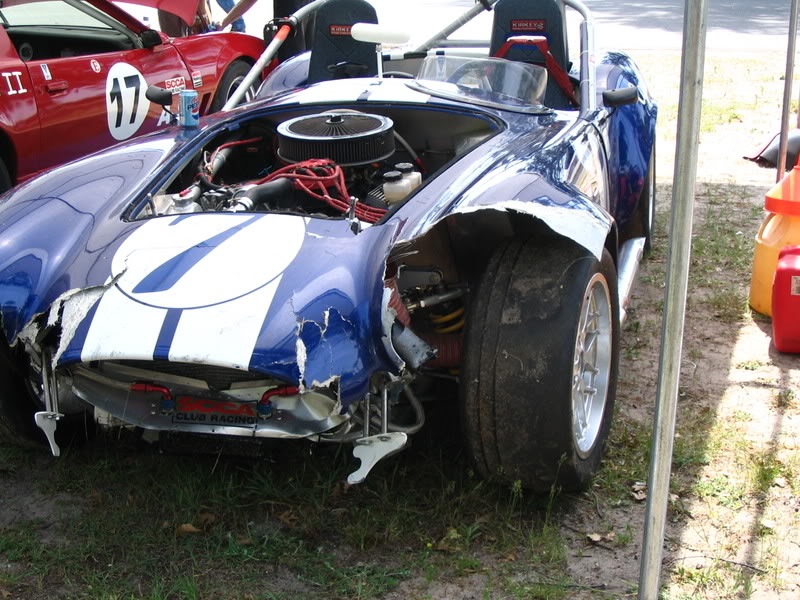 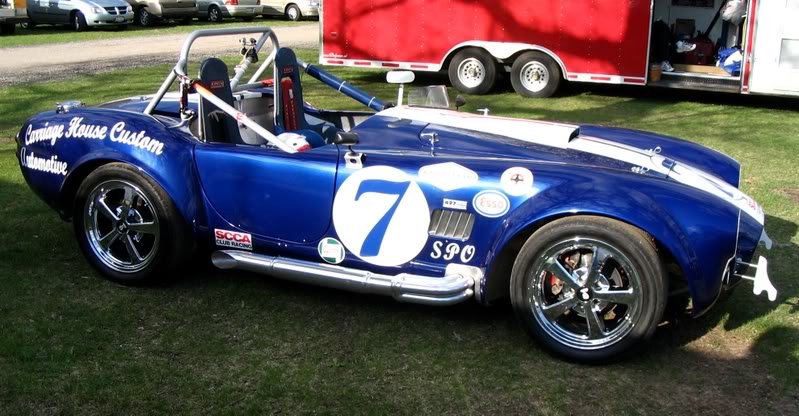 Great story Randy. Not sure I'd ever get "it" back to go at speed again.
B

Lifetime Supporter
Awesome story Randy. Glad you lived to tell it and we didn’t have to hear it 3rd hand.
Thanks for sharing your experience with us.