Collector6 said:
I called Bruce Canepa the other day to see what he was asking for his 962C short tail. $1.4 Million...I promptly apologized for wasting his time.
Click to expand...

Bruce has some cool (and expensive) stuff in his store, that's for sure. I was in there once and he had like 6, count 'em, 6 959 Porsches in the service/restoration area.

There are a few 962s for sale from time to time, I talked to the owner of one of the Texaco versions maybe five years back at Laguna. I think he got 800K for his at one of the auctions during the Historics that week.
P

ckouba said:
Don't let that stop you. A 962 has been on my back burner for decades and it won't stop me. I found a source for a laminated glass screen.

Hi Chris, I have e-mailed a bit with a few questions and I just sent off another to Fran on the 962. I have been poring over the state regs and think that I can adequately address them and squeak it through (other than the current glass issue).

The question remains is it too crazy to attempt this rather than a more useable SLC? I looked at the one in Japan that has been run on the streets and it is a tight interior. It would be pretty much 2 seats jammed together with a cutout made on the front inner corners of the seats to fit a shifter between them, it will be a harsh ride to keep it from bottoming on every little bump and will need lifts on all 4 corners to get over speedbumps and any kind of angled approaches.

That being said, it is probably the most (to me) desirable car I could own. I have a list of my favorite autos and all Fran's cars are on it, but the Rothman painted 962 is on the top.

Chris, As far as the laminated windscreen, if you would rather, you can PM me on that, I am most interested. Fran explained to me what it will take to get them made by his source.
C

GT40s Supporter
There might be a clause for recreational, or special purpose vehicles. No emissions, safety inspections either. Admittedly it would be tough to go the speed limit in a 2200lb car with 700+ hp zero clearance turbos...
L

prothct said:
I read through more than few threads on the 962 (as Fran stated), the really big showstopper for street usage was the lack of a Glass DOT windshield for the car. Though that fact kills it as a consideration for me, I still thank Fran for building yet another classic icon of racing history and sharing it with us. When Fran first posted those pics it brought back memories of my love for the Rothman cars!
Click to expand...

Curious, how many state inspectors actually checked for proper windshield during the registration process & how many states actually require laminated glass on a component car?

Collector6 said:
There might be a clause for recreational, or special purpose vehicles. No emissions, safety inspections either. Admittedly it would be tough to go the speed limit in a 2200lb car with 700+ hp zero clearance turbos...
Click to expand...

Funny thing about this, Oregon has just that- they call it a specialty plate.

As far as the cockpit goes, I had the opportunity to sit in a 962 and pour over it with a tape measure. The seating area (not the greenhouse) is actually WIDER than my GT40. Not by much but it was, maybe 2". The door sill configuration is different but there is more room for the seats. 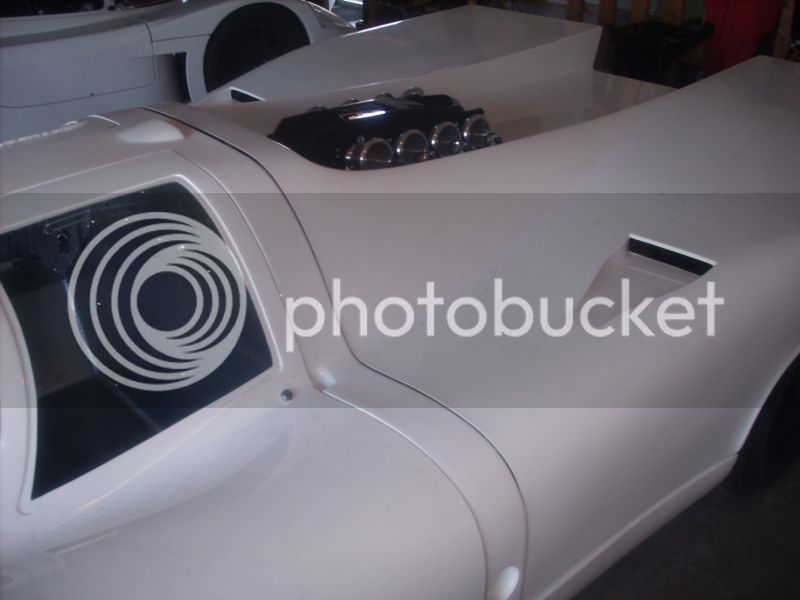 Plus being able to piss off the porsche purists gives me something to do in my spare time :laugh:
M

Will you paint or polish Alex?
C

LS MAN said:
Curious, how many state inspectors actually checked for proper windshield during the registration process & how many states actually require laminated glass on a component car?
Click to expand...

Good point, I have the plexiglass SL-C windshield in TX and no one has bothered to ask about it. Certain states don't inspect windshields. It's funny tho, the inspection stickers peal off plexi, I guess they were expecting glass. Another use for 3M tape....
D

There is an excellent Porsche 962 build going on at 962 recreation with a GT3 Heart... - PistonHeads - PistonHeads mobile
22 pages covering about a years worth of work.
T

Supporter
There is a simple answer to that question: $$$$$$$$$$$$$$ and the availability & cost of replacement parts.

Supporter
The ideal power train for one would be a cayman S complete donner car. Maybe one with the nose crushed. I think you would need the complete electronics/ engine/ PDK gearbox. At least at first to get it going and then toggle off what you didn't need Lots of race caymans out there so the information as to what you need to run one electronics wise isn't unknown.

350hp would really be perfect for a streetcar and as light as it could be done a very fast track only car as well. If I ever did another car that would be it.

because I was able to buy an 800hp engine for $20k that can go 200+k miles on oil changes alone and doesn't sound like a vacuum cleaner (granted this was 5yrs ago so prices have likely gone up since then).
S

I joined to get information on RCR's 962 (primarily)...this thread is discouraging.

Is the 962 in production? Have any been produced since the first one?

Supporter
S, have you talked to Fran at RCR? I would encourage you to do that and then if still interested visit the factory at RCR. I would guess that many others have decided to build other RCR offerings such as the SLC and others instead of the 917 or 962. This might be because the GT40, P3, and the SLC are better suited as a streetcar.

Otherwise, if there are other 962 kit suppliers that you are aware of I would, as well as others, be interested in seeing what you have found. My interest is in all things mid-engined prototypes. I believe many others would be interested as well. Pictures are always well received as are links to interesting websites.

Here's a link to the 962 on Pistonheads that works :

I have not spoken with RCR yet. I am still a while off from starting this journey. I have looked at the thread on PistonsHeads a several times though.

I am not worried about having a street car. This will be almost solely for open road racing but will need license plates.

And since you mentioned it...do you know why the P3 disappeared from their website after Ford Vs. Ferrari came out? I was seriously selling my '68 Chevelle to get a P3 for about a year (even found a 599 Ferrari v12 for a reasonable price), then the movie came out and the P3 fell off the website.

Supporter
I think your questions regarding RCR would be best answered by them. I haven't spoken to anyone at RCR since last year.
M

Concerning 917's there was also a nice member ( MR Noo) who started a thread describing the built of his 917 ( avery hudge work as he did a superb plug annd body ) but since a while he did not follow posting news about his built hence I know he have done alot of good work those past years ...

Mic said:
There was someone in canada selling 962 short bodies and offerring some uprights
He started doing his proper 962 ( quite anice built ) then started also a 904 with atubular frame ( he also was offering 904 bodies)
Click to expand...