Staff member
Admin
Lifetime Supporter
After already doing a search - I find that there are references to pictures (which I would really like to see but are no longer there)..

Has anyone here done removeable or sliding side windows or any other modifications for good cabinet ventilation?

Here are a few threads I found:

Staff member
Admin
Lifetime Supporter
popping back to the top in the hopes that someone has some input to this subject.. Thank you..
L

DRB (GT40 Australia) has (had?) an ally framing system to do this:

Thanks for the info - It's certainly a step in the direction I was contemplating. Not sure of the "wing-window" look.. I'll certainly be considering it though..
L

Many people have used nut-serts, well nuts or heli-coils to receive the window screws so that removal/replacement can be done fairly quickly. 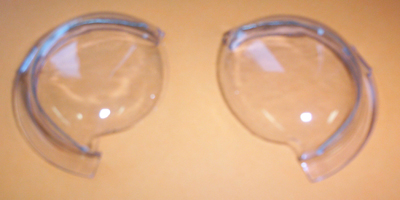 I recall the MkIIIs had hinged side windows. It would seem this would help a great deal for ventilation.

I do not know if the MkIII windows are available and/or if the hinges would allow you to remove them when the need arose.

Can anyone out there expand on this,.......and post any pictures maybe?

I believe DRB's window arrangement is essentially same as the MK III.
Despite what the above photo shows, I'm pretty sure the whole deal is an assembly that inserts into the existing MK 1 door.

That said...its NOT cheap. A sliding plexi window (see original MK IV photos)
would be cheap/easy/effective....although it is crude looking.

Lifetime Supporter
Gary,
Here is a shot of a MkIII window

Thanks for posting the MkIII side window. I have never seen a real MkIII in person, and from the looks of it, a possibility exists the set-up could be made to be able to remove the larger square portion of the window? I do
not know for sure. Maybe someone that has more first hand knowledge could chime in on this one. Anyone out there that works in a race car shop that has been close enough to expand on this?

Thanks again for posting the picture. Me being an old fart, I tried several times to post the thing, and failed. When I have my son over to the house for dinner the next time, I am sure he can guide me in the right direction.

One last thing.....do you know of the chassis number of the car in the picture?

Lifetime Supporter
Hi Gary,
The machine in question is GT40 P1103 now in the Motor Museum at Beaulieu, Hampshire, in the south of England.
There are a few shots of it on this forum however here are a few more.

Thank you for the excellant pictures. Thats what I like about this forum. People helping people.

GT40s Supporter
I have the DRB MKIII windows - aly frames & perspex like the one Lynn shows below. However, I did not bond the surrounding outer f/glass frames into the door, but kept them separate so that I could swap between this setup & the full perspex windows in the future.

The whole outer f/glass frame is just bolted into the door with s/s bolts & helicoils in the f/glass.

I have found the openable main windows a blessing - heaps of fresh air if you want it, you can pay tolls on expressways (although this is a dying art with electronic tags these days !), you can take the whole lot out very easily & have a large open window (with surprisingly little wind turbulence in the cabin), etc.

The only downside of this setup is that when you have the windows open, you look a bit like a fighter jet which has just deployed its air-brakes !!

The following early pic shows the car with the main windows removed, but you can see the separate outer frame & its securing bolts.

R
The KVA MKIII had opening side windows similar to the original MKIII, without the chrome surrounds. It's simliar to the DRB set-up (nice car Peter) but they had squared off rear bottom corners and they weren't removable.

How about electric side windows (see below)?

One of the main drivers behind my quest for better ventilation is that I live in a climate that really only has a few weeks of higher temps (upper 90'sf) in the summer. If I could arrange the cabin ventilation better and with proper insulation from the engine-bay, I may be able to get by without adding AC. Fran's got a great AC Kit so it won't be any intrustion (other than to my wallet) to implement - but I like to make things simple as possible in addition to enjoying the moderate climate during summertime.

Lynn - The Helicopter vents would be another good option for getting a little more airflow in the cabin.

JimmyMac - That P1103 is certainly a different looking animal.. I like it!

Peter D
I will probably end up with windows such as yours.. Peter, I love your car. I'm really hooked on the dark blues. Currently planning on Ford's Sonic Blue for mine. I also love the side mirrors you have. PM coming..

Rob - Thanks for the shot of the KVA MKIII with rollup windows Also - From the look of it, they cleared the door handle linkage by splitting the side-glass leaving the rear-most section stationary. While I'm not a big fan of electric door poppers (although I've never had them) - I think that would be one way of engineering around the moving glass channel.

On another note for those that have driven their 40's sans side glass -
What are the characteristics of the airflow in the cabin? Is it fairly decent inside or are you hammered by buffeting to the point where you slow down from normal highway cruising speeds?
W

There are several types of vents that have been employed by both originals and replicas. Here is one I posted of the 66 Road Car.

Our solution, remove window and screw on these small deflectors useing the same screw holes, good to 150mph and no wind buffeting. Frank

Nice solution Frank. Looks like something that would work well here in Southern California.

GT40s Supporter
Randy, with regard to the wind/turbulence with open windows - I drove mine for some months without any A/C & no windows/frames at all. No great drama & surprisingly little wind in the cabin. When I put in the MKIII frames with the little quarter windows, the turbulence without the main windows (even at 100km+) was noticeably reduced - not even enough to warrant a new visit to the hairdresser by my wife !!

I guess it says a lot for the inate GT40 body design - incredible when you remember that it is more than 40 years old !

Maybe some sort of combo of the old MKIII setup & Frank's deflectors would result in the ultimate solution ?

Where did you get these windows. Tom Turner, Calif.

GT40s Supporter
Tom, they are option from GT40 Australia (DRB). The f/glass frames come with plenty of excess around the edges, so you "should" be able to trim them down to fit the window openings on most cars whose molds came off an original GT40.

From memory, the kit includes the f/glass frames, the perspex windows (1 over-size piece for left & 1 for right - need cutting), the aluminium frames for the perspex, hinges & latches - all for around A$1000.

I hope this helps a bit.