The story of a Book:How I co-published 3 books on Ford GTs and didn't get rich

How I published three GT40 books and didn't get rich...
By Wallace Wyss 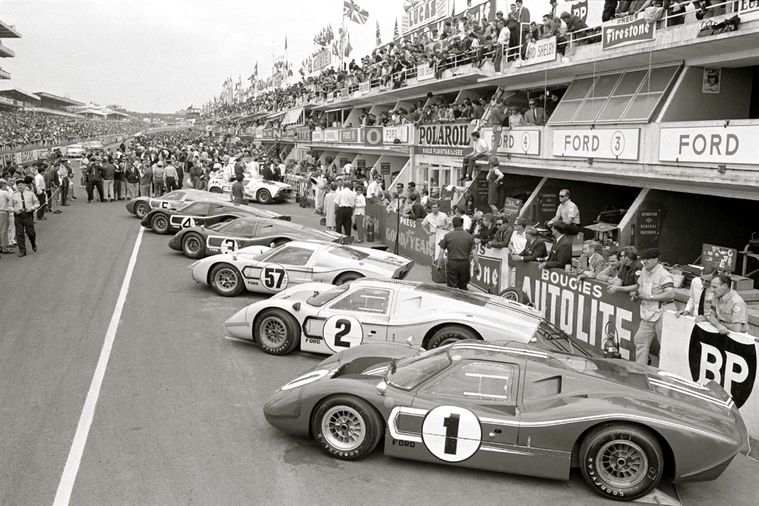 When I met Brian Winer, who was driving a Lotus Esprit at the time, I was surprised when he said his favorite car was the Ford GT40. This was back in the ‘70s. I thought he was a furrin’ car guy. Turned out we both had a soft spot for Fords of the Sixties. We looked around and discovered that there wasn’t much in print on the car at the time. Back in ’77, I had written Shelby’s Wildlife: the Cobras and the Mustangs, which had a few pages on Ford’s fight for victory at Le Mans but we were surprised to see that, while Cobras were proliferating (in replica form) there wasn’t much recognition of the car that had really put Ford on the International racing map, the GT40.

At some point, Brian, who is in commercial real estate, had me go over to England to sample the Safir, a GT40 made by a small company that got permission from Ford to reproduce their car exactly and even use their name (which would brew trouble for Ford later). I liked the car. Brian bought one. And we together went through our picture files and published a book called Ford GT40 Photo Archive through Iconografix, a Wisconsin publisher. There, we thought, we have done something for our favorite car—brought back recognition for it in material form (the Safir) and in a book.

But that was just a picture book, maybe 90 photos with captions. We still wanted others to know the story of how Ford’s Le Mans win came about. So I looked in my library and discovered a small hardbound book by a British attorney called Ford Vs. Ferrari. The author was Anthony Pritchard. I flew across the pond again and struck a deal to buy the book rights but only for five years (big mistake, as you'll see later on). Then I went to Dearborn and scooped up lots of pictures from the Ford Archives and began paying more attention to Ford GTs at the Monterey Historic races.

There was one problem with the original Pritchard book. It was written so early on in the game that it didn’t include the back-to-back Le Mans wins in 1968 and 1969, two years in which GT40s won Le Mans but were no longer being campaigned by Ford Motor Co. but by Gulf Oil. So, providently, I had also bought use of two chapters from another Pritchard book, covering those years at Le Mans.

What we both liked about the Pritchard book was his dry wit, and complete neutrality. He didn’t favor any one company over another, or the Brits involved over the Yanks, just told the facts. Admittedly there was not much of the now-much-discussed personality clashes in the book. We thought then that the story was in Ford developing and fettling the car. Oh, they had a good idea in buying two of the three Lola GTs that had been built and using them as test rigs, which the book covers, but the battles between John Wyer, the ex-Aston Martin team boss, and Eric Broadley, the Lola man put on retainer by Ford, weren’t much discussed. And neither was the tension between the drivers. 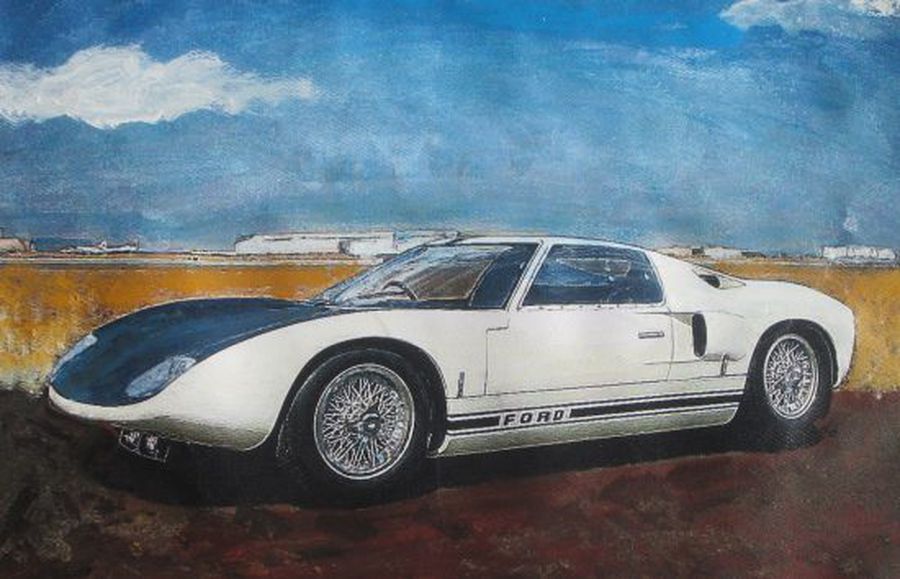 As a Ferrari fan as well, I wanted to know how Ford, which really didn’t have much skill at building world class international race cars, could beat Ferrari, the company that had made its name in racing and dominated Le Mans for five years in a row prior to their loss to Ford at Le Mans in 1966.

We had the new book laid out, designed a cover, and printed it in Japan, where I had met some printers of excellent quality books. Unfortunately we couldn’t get the car magazines of the time, like Road & Track, to review it, so sales just dawdled along and the general enthusiast public of the ‘80s didn’t yet realize what a great achievement Ford’s victory over Ferrari was. It was like we were championing some obscure WWII victory that took place on an island far away and nobody realized how potentially significant a battle it was. (For example Ferrari has never won a LeMans since Ford beat them...)

Flash forward almost 20 years to 2003 when Ford reintroduced a concept car called the Ford GT40. In ’05 a production version started coming off the line. Ironically they couldn’t sell it as the GT40 because when they had sold Safir the right to make GT40s they didn’t realize they hadn’t read the fine print and Safir now owned the name. So the production ’05 and ’06 car had to be called the Ford GT. With the introduction of that car, interest in the original GT40s picked up. Especially when Ford offered the Heritage Edition paint job that replicated the Gulf livery on the winning car in ’68 and '69 (singular "car" and not plural because, incredibly, the same car won both years).


And Brian dutifully bought a ’06, and once again we made a book which took a year to write, including test driving the Ford GT at the Dearborn test track, interviewing the chief designer, the chie engineer, photographing the plant, etc. . A similar problem came in publicizing the '05-'06 Ford GT book. In America, if you can’t get the reviews in the big magazines, you are dead in the water.

Flash forward another few years. Ford once again has a new Ford GT, though it’s a V-6 and doesn’t have any of the styling of the originals. I have zero interest in doing a book on the present model because of a changed Ford policy where they want to charge authors for each and every picture in a book.(What a way to promote your legacy, eh?) As if they were in the picture selling business, not the car selling business.

Brian, a world champion string saver, still has copies of our edition of Ford vs. Ferrari. And of Ford GT40 and the New Ford GT. I Iooked up Ford vs. Ferrari and damned if Pritchard, once he got the rights back, didn’t put out an expanded edition through Haynes with no less than 600 pictures, but the market still wasn’t there yet and even that didn’t sell well. In fact it sold so badly that Haynes, the publisher, gave up on racing books and went back to the safe area of their tried and true how-to manuals.

There was a diversion, a momentary flurry of excitement for me when a movie company optioned my Shelby The Man the Cars the Legend book with an eye toward making a TV series but they did a sci-fi series instead. (Hey Hollywood, the book's still available and there's more interest in Shelby's life than ever....)

I think they were scared off by an upcoming movie coming up called Ford v.Ferrari.
No small project, budgeted at $100 million.
Alas, I could have pitched them the rights to the Pritchard book IF I had thought to buy them, but I had only only bought five years of print rights, no film rights. alas.

The movie made its money back, and spawned a whole new generation of Shelby fans who, once they've digested the Cobra story, would presumably want to find out about that car called the Ford GT. We thought "Well, at last the readers will come..." After all, it was our nickel that kept the flame burning by publishing two books on the subject a quarter century earlier when no one cared.

But our hope was premature. Now there's a dozen newer books on the Ford GT, both the '60's versions and the '05-'06 Ford GT. The market for Ford GT40 and the new Ford GT is mostly those who have noticed low mileage ones are now going for up to twice their original price and suddenly want to know about it

So here we are in 2021. Brian still has books. He can be reached at [email protected]

Me? Well, I’m out of book publishing for the moment, sittin' on the beach wearin’ a fine artist’s beret and helping raise throroughbreds. Write me for a list of Cobra & GT art. I can make an oil painting of any one I've got that's a paper print now. I can be reached at [email protected]. And hey, commission a 20" x 30" canvas and I'll throw in a book. Free.

Supporter
Wah, wah, wah. You didn't get Ford to let you make money off their trademarks. Sucks to be you. But you have XGT-1 to beat about yet....oh, wait, that was solved 50+ years ago.....
B

Back in the '65 through 2000 time, most automakers I visited would invite me into their library and say ":Take what you want." With this new attitude in the new century of "Gee, maybe we can make $1000 on selling pictures" they seem to have lost sight of their original goal which is to sell cars. And the way you do that is to create a strong image through books, and yes, clubs. Some car models will disappear entirely because the automaker made it tough on authors and publishers to do a book. Yet ironically Tesla doesn't even have a PR dept. but is the toast of the town in the media, maybe because Elon Musk is so different for a car exec.

The GTX-1 is only interesting to me because a Ford engineer stuck his neck out to design it, then helped find a guy he thought could do it and that turned out not to be the right guy. But they are still beautiful. I even made a painting of a black one in Malibu. Newcomers to the '05-'06s want to know the story, and I'd do an article but don't have consistent figures on number completed--though it's under 50 for sure by Gerish though I understand some other group qualified to finish them helped complete the rest at another shop. It's the twists and turns that make a car's evolution interesting. And for the '05-'06s it's a happy ending appreciation wise.
You must log in or register to reply here.
Share:
Facebook Twitter Reddit Pinterest Tumblr WhatsApp Email Link
Top