I need to know what slave & master cylinder for the clutch.
Citroën DS 5-speed gearbox as used on KVA. Its pre C35 (Citroën SM) but basicaly the same as used on Maserati & Lotus Esprit S1.
Bellhouse on KVA is Citroën, not Lotus Esprit. They completely differ including slave cilinder.

The Citroën slave cylinder for a diaghram clutch post '71 is a 24mm diameter ( about .950") with a stroke of max 20mm (after that, the piston goes beyond the seal).
It normaly uses LMH fluid but a Viton seal will sort that. These days aftermarket cylinders are capable for LHM & LHS ( DOT3) anyways.
Citroën system works on an complete hydraulic system anyways on very high pressure.

My Pedal box has a .700 master at the moment. These Girling masters on a general pedal box have a stroke of 30mm ( 35mm to bottom)

Clutch fork ratio is measured 2.4:1.
So If I need rule of thumb, 10mm movement on the clutch cover, I need 24mm on the other end of the fork.

Anyways, I allways thought slave cylinder needs to be smaller than master cylinder.

My gearbox is a 450BHP Citroën DS23 5speed gearbox with correct turning CWP & Quaife ATB (cause I payed for it to be).

There was no clutch slave when I bought this KVA "B" project (ex Mick Ridley).

So whats a common slave & master on KVA with this Citroën gearbox or whats recommended. Don't want to invent the wheel while its allready invented.
J

So I figured out,
Normal Girling type mastercylinders as used on our fourties have about 29mm stroke.

Lotus Esprit S1 also has a 3/8 (22mm) bore slave, although differend model its the same size..
So I assume 15mm stroke of the slave should be sufficient to disengage the clutch.

Supporter
Hi JP,
That does not seem to be correct. A 22mm cylinder is not 3/8 inch - more like 7/8 inch.
You will need to know the amount of movement at the clutch which is needed to completely release it. Then use the clutch arm ratio to give the movement needed at the slave cylinder. You can then calculate the volume of fluid which will need to be moved for full release for a range of slave cylinder bore sizes. You can then match these volumes to a range of master cylinder sizes as the max stroke of your master cylinder will be set by your pedal setup.
I did a similar thing on my car when I upgraded the clutch. Took a few attempts to get it correct because you also have to consider how hard you need to push the pedal. I finally settled on a 0.75 inch Girling master cylinder and a sleeved down Renault slave cylinder. I think that the slave cylinder was sleeved down from 25mm to 22mm.
A further point is to use as large a diameter connecting pipe as possible so the fluid can flow freely. This will give a better pedal feel.

so Ill skip this Citroen thing which hasn't have a bleed.. and has an odd 4.5 x789 thread nipple 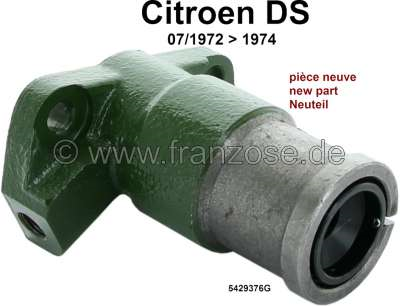 Just have to make a bracket to make it fit.

Supporter
Forgot to mention that I got the sleeved down master cylinder from Chris Cole (on an exchange basis). He also supplied the upgraded release bearing and carrier. The Renault slave cylinder mounting bolts are a bit unusual as they are 7mm.

Supporter
I've found that there are any number of small-car masters that can be easily adapted, with the proper bore. I used a Mitsubishi simply because I could buy a spare easily and cheaply from just about anywhere, had the proper bore and stroke needed, and could easily fit my application.