HAS ANYONE BUILT A 72 IN BELT GRINDER? THERE ARE SEVER YOU TUBE VIDEOS USING TREADMILL MOTOR AND CONTROL PANEL..
ANY THOUGHTS ??? ANYONE HAVE PLANS FOR ONE??

THANK YOU IN ADVANCE

Supporter
What are you up to Walt ?
W

I GUESS I NEED A PROJECT BILL

GT40s Sponsor
Supporter
Walt needs to trim his toenails, he can run and sand nails at the same time!
W 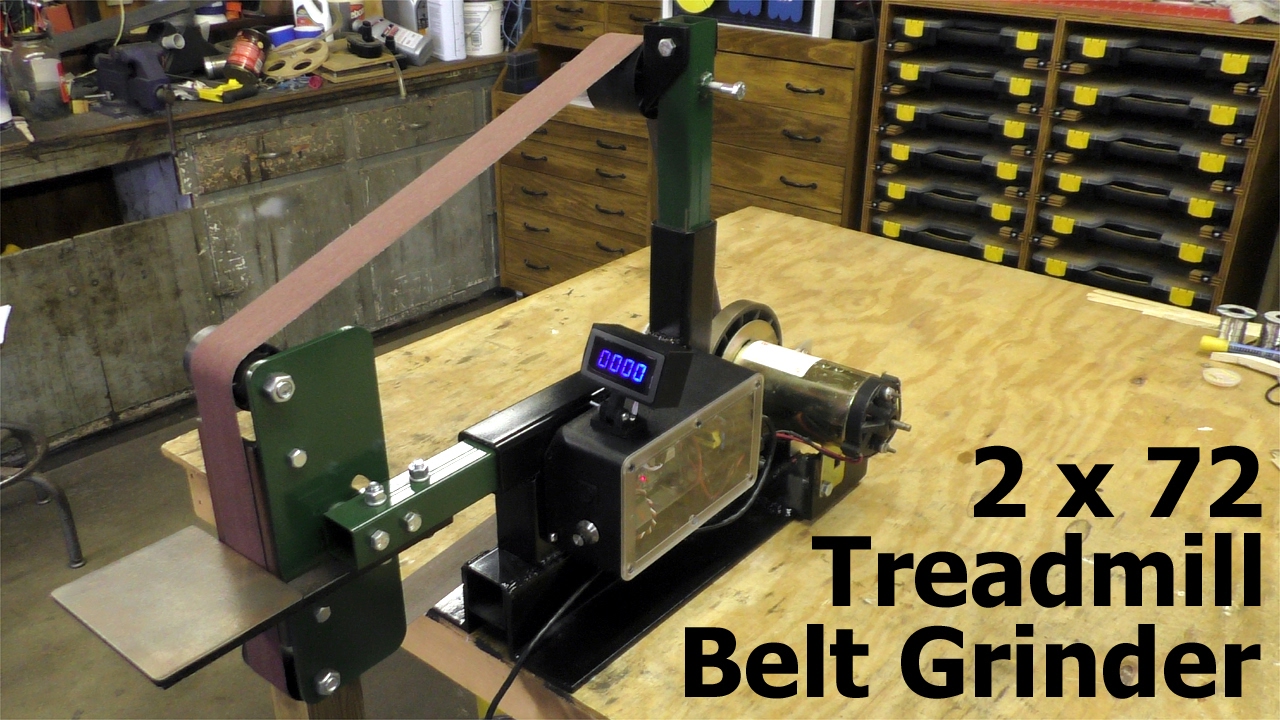 THANK YOU IN ADVANCE

I built a belt grinder about seven years ago and it very quickly became the most frequently used machine in my shop.
As a starting point I used the ”grinder in a box” from Polar Bear Forge (think it was about $250 or so) it is 1/2 steel plates that are waterjet cut and you bolt together. I have mills a lathe and access to a local metal supplier so I made most everything else. I used a 3hp 3 phase motor and a VFD to make it variable speed which I highly recommend. Also, I machined a three inch and a five inch drive pulley for the motor to give even more RPM range than the VFD. I made four grinder attachments, flat platen, an 8” to 2” slack belt, a 12” wheel (to hollow grind) and a grinder arm with replaceable wheels from 3/8” to 2.5” to grind a specific size radius.
I used 6x6 steel tube for the base upright and 2x6 tube for the feet. It is a little heavy to roll around a lot but not bad. It will eat up steel more than 10x faster than a grinder and with variable speed it is highly controllable.
Just guessing but I probably have $1,000 in parts and about 100 hours of labor in it, that said, it was an invaluable addition to my shop.
Keith
W

NICE JOB ...I WILL USE SOME OF YOUR IDEAS .. AND I AGREE, THEY REALLY EAT UP THE METAL.. THANK YOU FOR THE INFO... I'LL POST A PHOTO IF I BUILD ONE.

THERE IS A LOT OF GOOD VIDEOS THERE..THANK YOU.. NEVER TOO MUCH INFO

Supporter
When you do finish your belt grinder, I'd recommend using 3M Cubitron II abrasive belts. It is the best abrasive that I've ever used. In the beginning I used mostly aluminum oxide but switched to zirconium oxide and then to Cubitron II. It cuts fast, leaves a nice finish, and lasts longer than other types. It is n oriented ceramic grain abrasive.

NEIL.... YOU'RE THE MAN.. I HAVE USED THE FIRST TWO YOU MENTIONED.. CUBITRON SOUNDS LIKE THE HOT LICK

Supporter
No problem Walt there are plans, parts, wheels, and all the information you need depending on your skill set Are your best mate skill set I’m sure you can put something together
Regards Mark
You must log in or register to reply here.
Share:
Facebook Twitter Reddit Pinterest Tumblr WhatsApp Email Link
Top