Admin
Lifetime Supporter
One of the problems with radiators that are tilted for fitment is that the fins of the radiators and oil coolers are almost always perpendicular to the height measurement. Essentially, the only way for the radiator to experience full airflow is if the radiator is standing straight up&down. Of course you can duct the air around in order to get the straight through flow, however that would take a lot of room. About 20 years ago I was working a Petite Lemans race and noticed a couple of the LMP cars had specialty radiators whose fins were parallel to the airflow. I’m curious if anyone has done some efficiency analysis on sending air at a conventional radiator at a 45° angle vs. straight through. Also, as pointed out earlier, there must be some impact on aerodynamics (frontal area)... Thoughts?

It seemed to me that on my car the first area to be improved was the outlet ducting. I did this somewhat but since then have come to understand that my approach can still be improved on.

My comments should be kept in context, in that, my car is a track-only car and it only sees speeds below 60mph or so in the paddock and pit lane. I would like to remove the fans and their restriction but it's just not possible in that the typical track day requires enough slow speed paddock time that it would lead to overheating.

IMHO I believe that this all can be addressed with fans and an effective shroud at 1st & 2nd gear traffic speeds and legal road speeds,

Lifetime Supporter
Randy, I posed your questions to my aero guy and the following is his response. The CFD images are of my car because the F1 stuff is obviously proprietary and confidential. The drag numbers are for a custom C&R radiator with a thick core, fan shroud and drop in fans (i.e., different than stock).

Radiator Fins
A typical modern radiator has louvred fins of around 0.007” thick, with the spacing and height dependent on the incidence they are set to and the targets for the complete core. This herringbone arrangement is then mirrored for each airside row as the radiator is built. The fins are close enough that they support each other aerodynamically (like turning vanes) and separation is small, while the surface area and flow mixing are high. 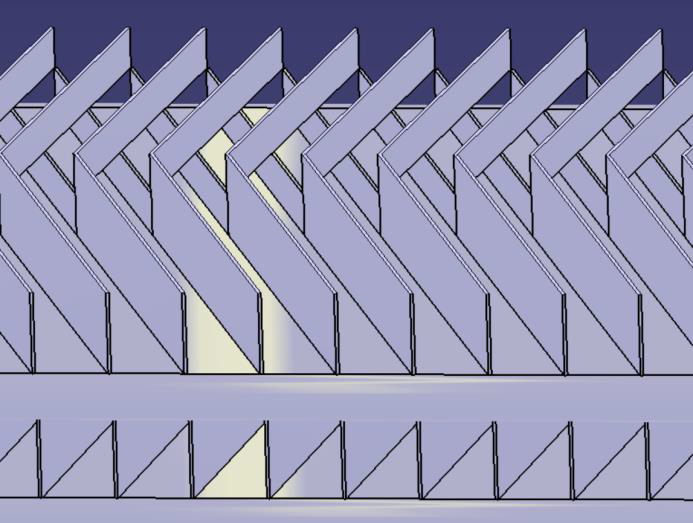 Forced convection cooling is proportional to Re^5/8, where Reynolds Number (Re) is a function of velocity x characteristic length - in this case the length of the fin. This means there is a non-linear relationship between air velocity (or mass flow rate) and cooling achieved, and the fin design can be optimised for different face air speeds. This is a graph of test data from over 10 years ago. 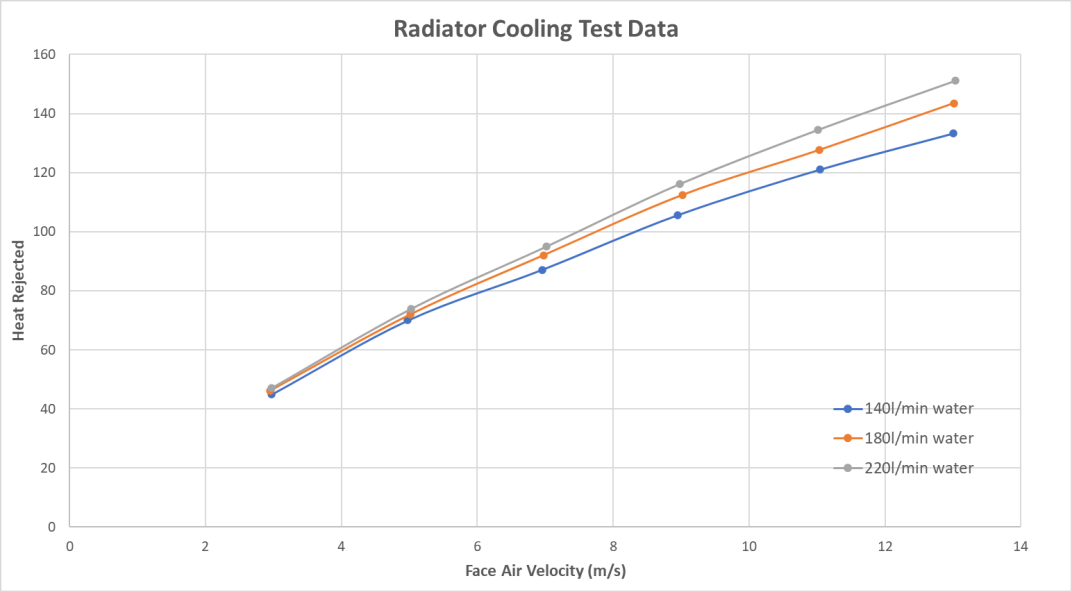 Turbulence level in the air flow does not make a substantial difference to the cooling (except for vortex burst due to the pressure rise in the duct or laminar wall separation in very sinuous ducts), the air speed is low and the fins are sharp edged with a high angle of aerodynamic incidence so the flow field inside the radiator is self supporting almost irrespective of surrounding conditions.

Radiator Duct Flow
A typical F1 radiator is long and thin, which gives a long distance to make the air expand and allows a very tight duct with the maximum radiator volume packaged in the car. Typically, the bottom of the duct is at 15-20deg to the face of the core, with the radiator installed at a slightly greater angle to the floor (20-30deg) to allow the inlet to placed as high as possible (cooler air away from the tarmac and less debris in the duct, and aerodynamic advantages) with pipes and electronics mounted under the duct (particularly those than need active cooling). 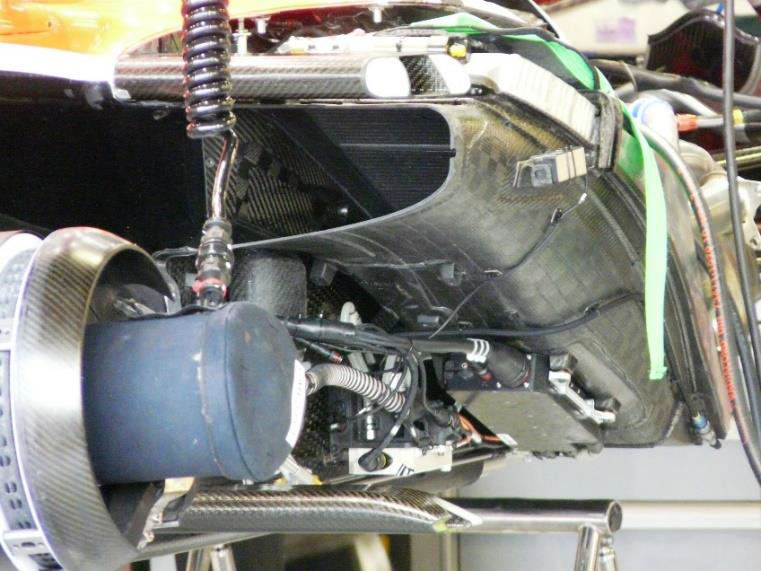 The air flow does not hit the radiator at a uniform inclination angle across the duct, as the pressure field created by the radiator deflects the flow. The higher the incidence the greater the work done by the air, and the higher the losses/drag. The greater the resistance of the radiator - density of fins, thickness, air/fluid row ratio etc - the bigger this field and the more flow turning is done ahead of the core. In the SuperLite CFD section below you can see there is a range of ±45° incidence between the top and bottom rows of the radiator, and this is captured by the model as higher blockage and lower flow in these areas. 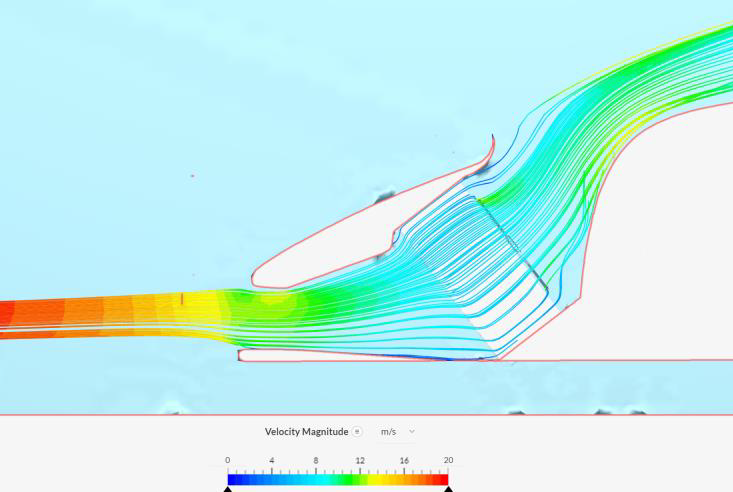 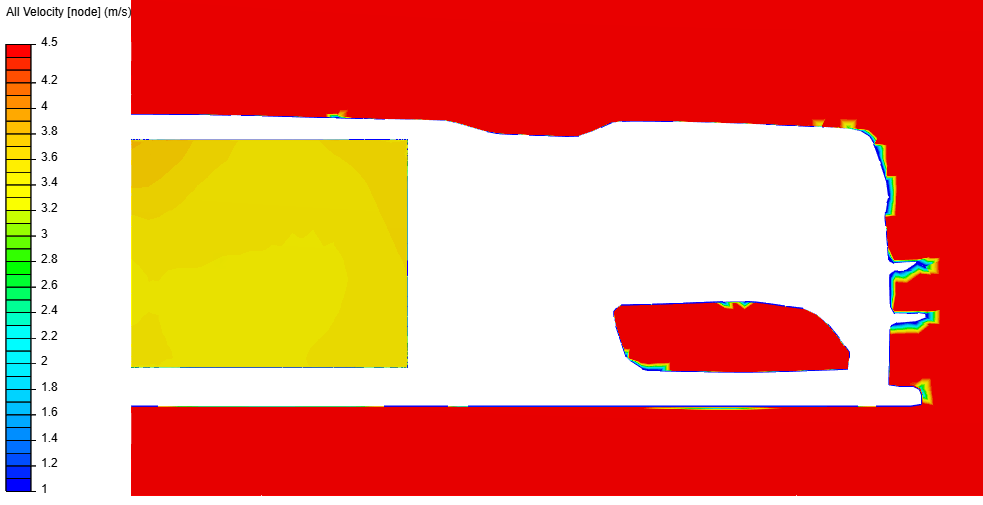 While separation from the fins is small, the main risk for an installation is separation from the fluid rows as the air passes. This section through the same core shows extruded tubes with round leading edges, which help, but older plate and bar radiators are still used (often for oil cores due to higher pressure ratings) which have sharp edges. 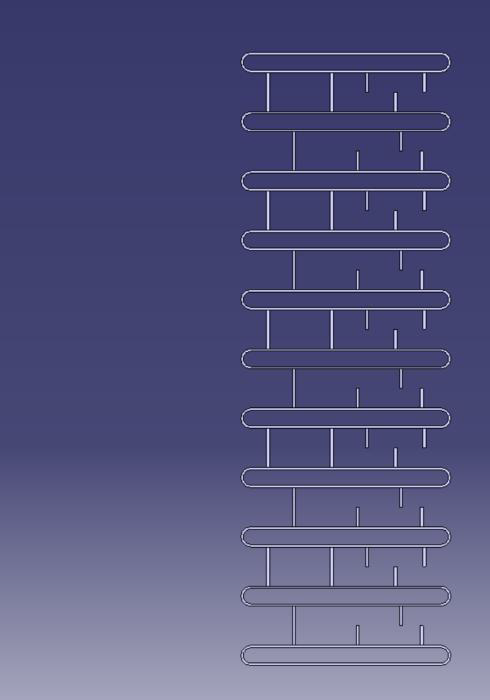 The worst case problem is where the top of the radiator sees a high incidence, separates, and flow starts moving across the face of the core rather than through it. This face flow increases the incidence in other areas and in a cascade failure most of the radiator stops working; as there is less face flow at the edges, particularly at the bottom, these keep working but with 80% of the flow through less than 20% of the area the pressure drop is much higher (approximately air speed ^1.5) and mass flow reduced (on top of the reduction in efficiency at higher air speeds over the fins discussed above.

Some F1 radiator manufacturers incline the rows relative to the front face to reduce this separation risk, and if fully reoptimised it is just a way of fitting a standard angle core in the longer space of a flat core. The shape of the core is bespoke to maximise area within the bodywork, and the latest option is to twist the rows around like a helix to again package more core into the given space. 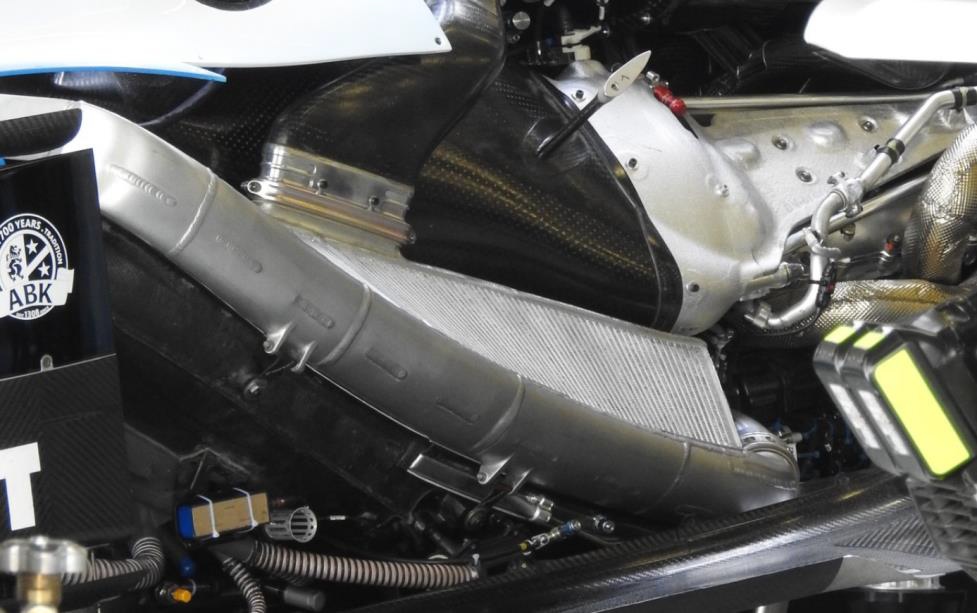 It is very complex to model the fin and row detail of a radiator, either in CFD or a wind tunnel model, and the simplifications mean they usually underpredict this face separation (both are modelled as porous media - perforated plates in a scale model and regions of high energy loss in CFD). Only full size testing, in a car or on a rig, can determine the minimum safe angle to operate the radiator, and there has been a long history of such mistakes ruining a car. Irrespective of core construction and aspect ratio, a duct floor to radiator face included angle of 30deg can be expected to always be safe, but may not be optimum. The Superlite duct has an included angle of 50deg as due to the car layout there is no packaging advantage to going flatter, and this should offer a small air mass flow advantage.

System Air Flow Characteristics
The drag on the core is the sum of all the aerodynamic losses of the air going through it as we have listed above, and is a component of car drag; so blocking up the radiator duct will increase top speed, although not but much as the air going through the radiator is at a fraction of car speed and drag scales with the square of speed. For the SuperLite the radiator has an average face velocity of 25% of car speed, so for a radiator drag coefficient of 0.3 it is only contributing 0.02 (4-5%) to the overall drag.

If you modify the radiator position or duct design to increase the incidence on the rows and/or the flow distribution becomes less uniform, the radiator drag coefficient goes up. As air will take the path of least resistance this does not necessarily mean the overall drag will go up, but that the air mass flow (face velocity ratio) will go down until the path around the car is the same total pressure drop as the path through the car.

Usually, the radiator is less than half the pressure drop of the path through the car, the losses in the expansion and (often convoluted) exit ducts are smaller coefficients but the air speed is higher, so if you fit a double resistance core in the same duct the air mass flow will only drop by 10-20% and you get more overall cooling. For the SuperLite the radiator had been made very resistive (even without the high blockage cover) and is estimated to be 92% the pressure drop of the ‘through car’ path, and requires the fans at maximum setting to get to the radiator face speed the fins had been optimised for.

The air exiting the radiator is hot, low energy, high entropy/turbulence and highly non-uniform (jets of air between each fin). The CFD is usually conducted cold, and the simplified radiator model means no increase in turbulence in this air, but the loss of energy means lower total pressure, and lower air speed, this can be seen as a wake of low speed air exiting the radiator duct. 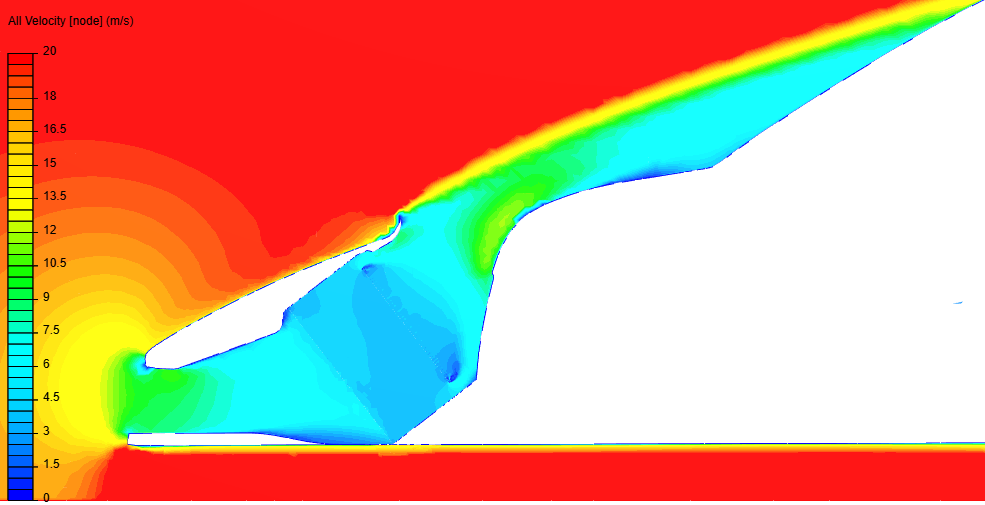 Supporter
The information I have been able to collect, and frankly guess at, suggests that the majority of the cooling is being done in the top 1/3 of the radiator. The bottom third is surely not as efficient as the top third. I believe this is due to airflow volumes inside the inlet. Your model seems to confirm this. I have checked the core temps as soon as possible after stopping the car and turning off the pump and the bottom third consistently reads 20 -40F degrees hotter. Interestingly if I run the fans after leaving the track then this deferential drops dramatically. This also seems to confirm your/our data.

I am hoping to correct this by adding a turning vane in the inlet. I am thinking of splitting the inlet at the nose into two equal sections and then directing the bottom 1/2 of the inlet airflow volume to the bottom 1/3 of the radiator core.

Lifetime Supporter
Randy, I've learned a lot and I'll do a big write up at some point.

Howard, my ERA cobra has a foil in the radiator inlet. I'm planning on designing a new splitter and I'm going to investigate if a foil in the inlet helps much with downforce. I ran your situation past my aero guy and here is his response. While we both have C&R radiators, I went with a big core and a deep shroud with drop in fans so our layouts are a bit different:

If his layout is similar to yours then I would normally expect the top to be more of an issue than the bottom, but it must be airside if the fans even out the temperatures. Two possibilities: there is a separation on the top of the splitter and/or in the bottom of the duct (seems unlikely given this arrangement); or too much blockage behind the core - which the fans can help overcome. The first problem can be helped by a splitter (it should completely fix a duct separation), the second will be a little worse with an inlet splitter and might benefit from an exit splitter, a new exit duct or even moving the radiator (forward or lie it down to open up the exit).

If there is any other data to explain why it is in the inlet then happy to take a look, but I would look behind the core first.
Click to expand...

Supporter
Scott the "all velocity" attachment above infers that the void area on the inside top of the nose before the radiator and right behind the inlet has been contoured. Mine is still "standard" RCR. This is an area that I intend to address by filling and shaping with expanding two-part foam as soon as it arrives. Could this be a large contributor to my problem? I tend to think so.
You must log in or register to reply here.
Share:
Facebook Twitter Reddit Pinterest Tumblr WhatsApp Email Link
Top