Phil H said:
I’m going to use a corsa c column on the gt forte is about to start building. How did you lock of the adjustable height and what did you do to extend the shaft to the steering wheel. Cheers in advance Phil
Click to expand...

Beware if building the GT Forte that the dashboards supplied by them are different to others. The GT Forte dash is wider and the steering column is in a (slightly) different location. Enough so that if you say bought a Southern GT dash it wouldn't fit properly.

If you have bought a chassis then I'd go with their dash (I don't know if anyone elses dash is the same size).
If you bought the kit where you weld up the chassis then buy the dash *first* before finalising the column location.

Anyway, I used a Suzuki Wagon R / Agila A column on mine, it's smaller & lighter than the Corsa plus it has a magnetic clutch on it so that if you don't want assistance you're not dragging the motor round. It's also a perfect length to fit without *any* modification to the column (it means I can use the steering lock which will help for IVA). 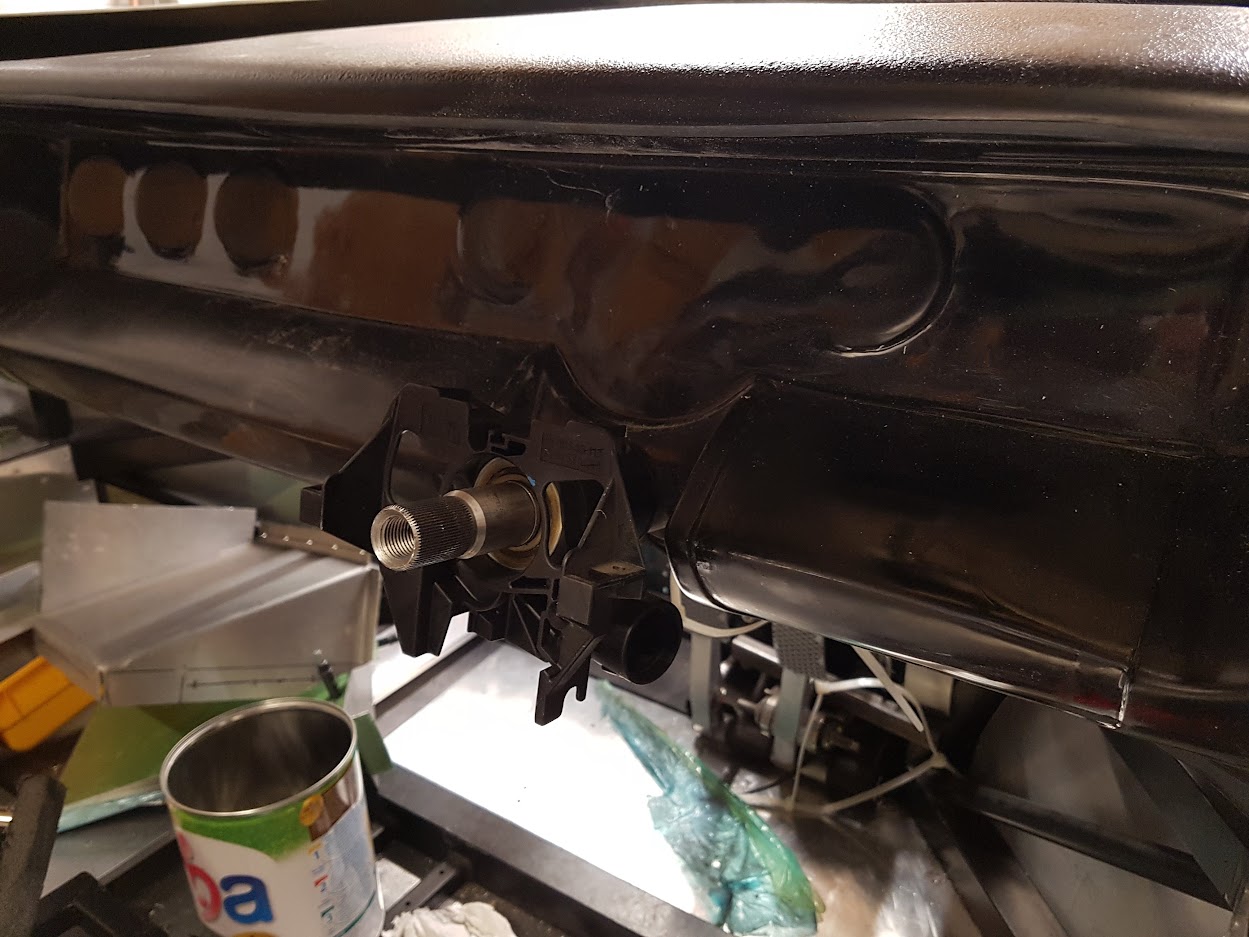 Downside is that the steering column spline is rare (both ends) however you *can* get them.

For the wheel I will use the original wheel for IVA. At a later date I can then use an adaptor to put a different wheel on.

Hi Phil,
Have at page 2 of my build log, as there’s some more information on how I fitted the EPAS unit. I think I used a unit with no tilt section. For the steering wheel I was able to buy a proper adapter hub, but for another build I bought an old steering wheel to cannibalise it for the splined hub portion. I have a lathe and I was able to machine up all the parts to get the system to work.

Regarding the dash comment, I surprised about the comment GT-Forte dash being wider as my dash was used to make Darren’s mould!
Regards,
Andy
F

saxoncross said:
Regarding the dash comment, I surprised about the comment GT-Forte dash being wider as my dash was used to make Darren’s mould!
Click to expand...

Wider than the SGT/GTD/Lee Dawson dash. Probably the same as Tornado.

It's more that the column location differs that is an issue.
J

fastdruid said:
Beware if building the GT Forte that the dashboards supplied by them are different to others. The GT Forte dash is wider and the steering column is in a (slightly) different location. Enough so that if you say bought a Southern GT dash it wouldn't fit properly.

I had the same issues with the GTForte dash. Steeringwheel position in the wrong position.
Ended up with cutting the middle gauge piece out and repositioning it more to the right.
Now my steering wheel sits straight & in the right postion.

Supporter
Congratulations on the features in the magazine! The level of finish is inspiring! Are you planning on bringing it to Stoneleigh this year? I'd love to see it in the flesh

Hi Andrew,
many thanks, it did come out rather well. I aiming to be at the Stoneleigh show this year and happy to show you around it
Front cover attached for those that missed it
Regards,
Andy 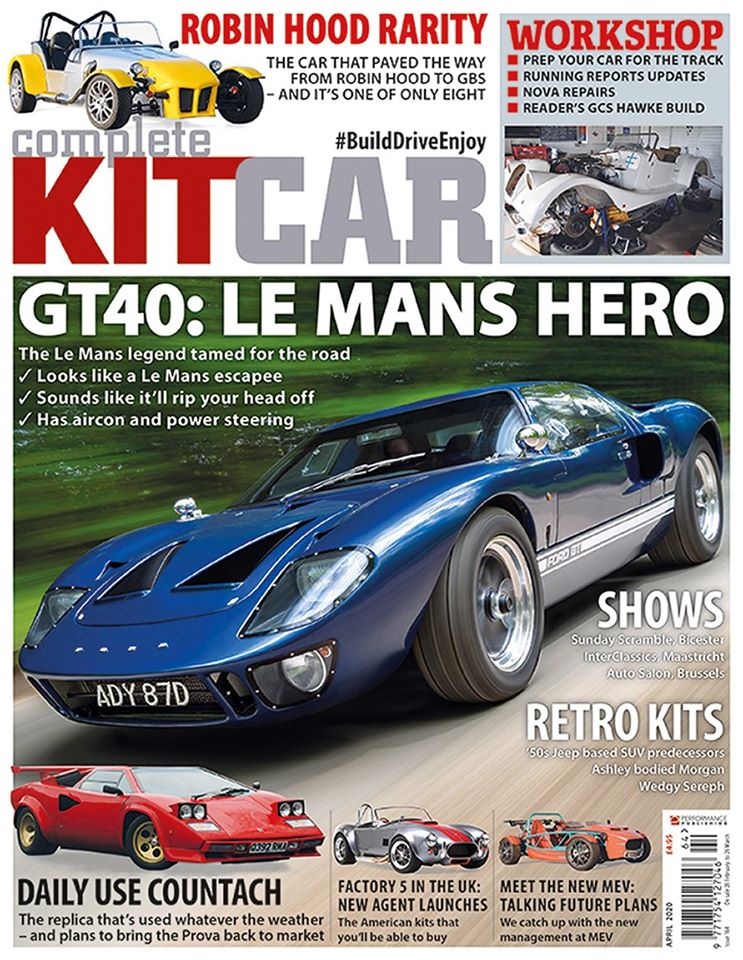 I am interested in your equal length headers. I am most interested in the sound, I suspect there is not much difference in horsepower. If you listen to an original GT40, the sound is fantastic.
I have a Tornado GT40 with their exhaust headers, they are not equal length (ranging from 26" to 44").

Hi Bob,
I never tested the effect of equal vs. unequal length headers, as I knew equal length headers from a design perspective would be the way to go. Having equal length headers will have an effect on the performance, but not much on acoustics. The biggest difference between the video and probably what you’re running in your ’40 is a full race long-duration cam and straight-thro pipes!
Regards,
Andy
B

Thanks Andy. Do you have an in-car video of your car at full song or could you do that for us?

Other than routine maintenance on the ’40, I’ve not had to carry out any major work on it since it’s been on the road for the last 5 years and 12,000 miles.
However, last year I’d had a failure of the electric water-pump, which was a Davies Craig EWP130. This is the second failure of their unit, with the first one failing on its first major trip at the Eurotunnel port on the way to LeMans, fortunately I had a spare!

I’ve now fitted a Pierburg CWA400 electric water-pump, which are now fitted to most Ford, BMW, Mercedes gasoline engines and are available for similar money to the Davies-Craig pumps

As they are basically flowing a similar amount, the size of the electric motor is an interesting comparison, which is a brushless DC motor, so service life will be much
greater (they are validated for 6,000 hours use). They are also rated at 150Ltr/min @ 0.8bar pressure, whereas the Davis Craig units are rated at zero pressure, so the actual flow will be lower under pressure. They do require a PWM signal, which can be provided by a stand-alone controller, or in my case the ECU will provide the control

I also fitted a new steering rack, as there was a small amount of play in the N/S inner rack bush
The slight rattle I’d previously thought was linked to the above, was actually a broken anti-roll bar arm. These were off my own design and basically had one too may lightening holes! New laser cut arms were sourced with the offending hole removed!

The trip to LeMans this year was hampered with a failing head gasket, which was picked up on the way down to Portsmouth to catch the ferry. I believe I could have nursed it there and back, but took the less stressful (and more comfortable) route of getting the car recovered home and going down 24hrs later in the daily driver 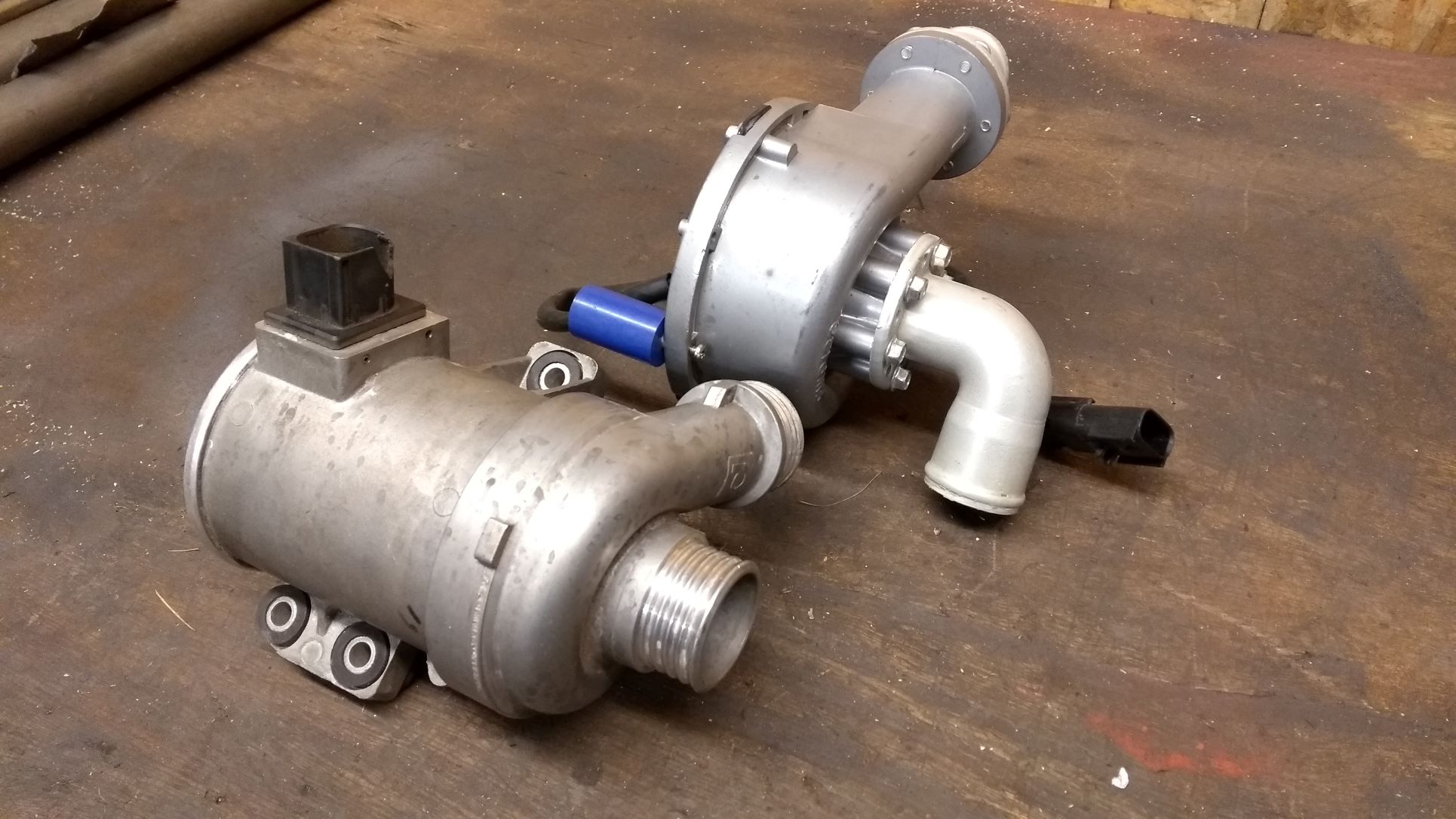 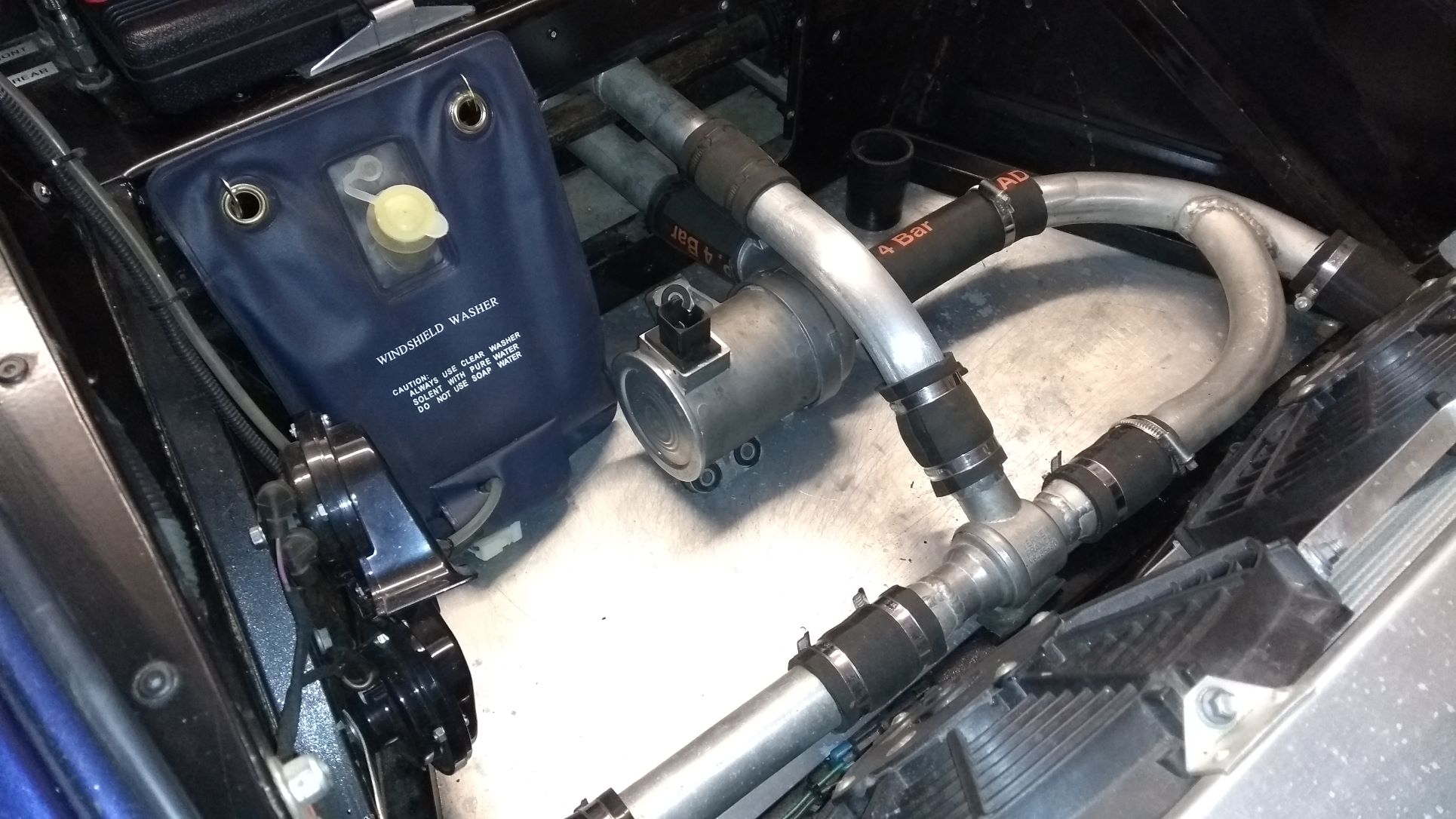 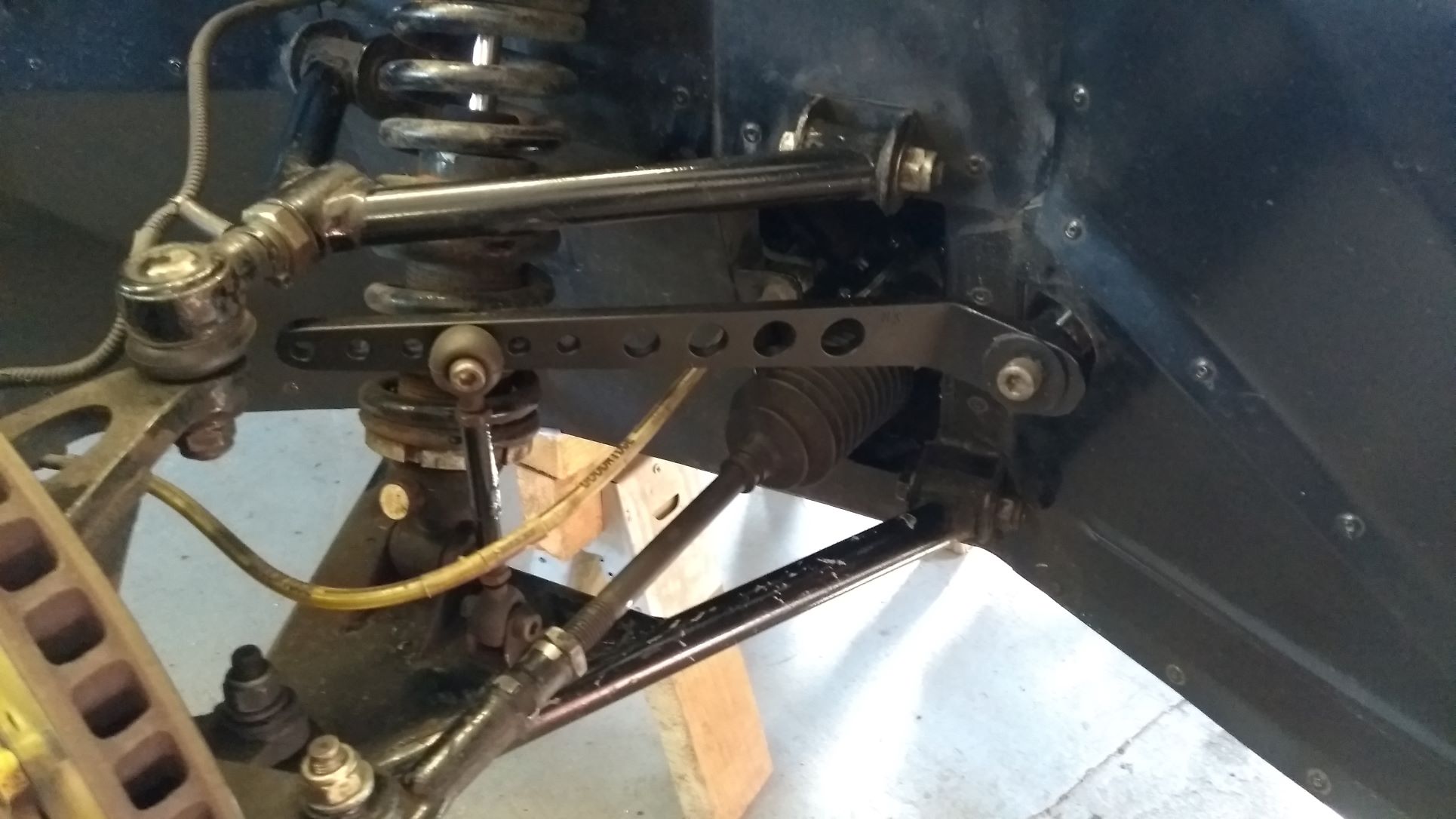 12000 miles in 5 years ! That's fantastic, you're obviously getting a lot of use out of the car & that amount of miles is a testament to the build quality. Great work