Supporter
The base chassis is the M1088, which is the mil version of a fifth wheel tractor. It's rated for 25,000# vertical load on the fifth wheel and 60,000# towing capacity. Couple that with having literally removed about a ton of steel already, I am not too worried about a few sheets of plywood!! I haven't had it up to hwy speeds yet but it doesn't yet seem to notice the box on the back.

Supporter
Getting that beast to ride nice Chris, what are you planning ?? I'v seen a few of that type of unit in northern B.C. but never stopped to chat with the owners.

Supporter
We don't have any specific itineraries planned out yet, but something on the list is a trip north for aurora borealis. If we're in the neighborhood, will drop a line.

Supporter
Go for it, You are welcome any time. This was a great trip. We only took 3 weeks but could have spent 2 months. The Tuktoyaktak sign is on the Beaufort Sea looking north west. ( A pingo is an up swelling of permafrost ). Getting old with a huge bucket list. That sign post is on a mountain top near Keno.

Supporter
Panel seams are capped with alu trim and the box should now be weather tight. Time to get on with it! 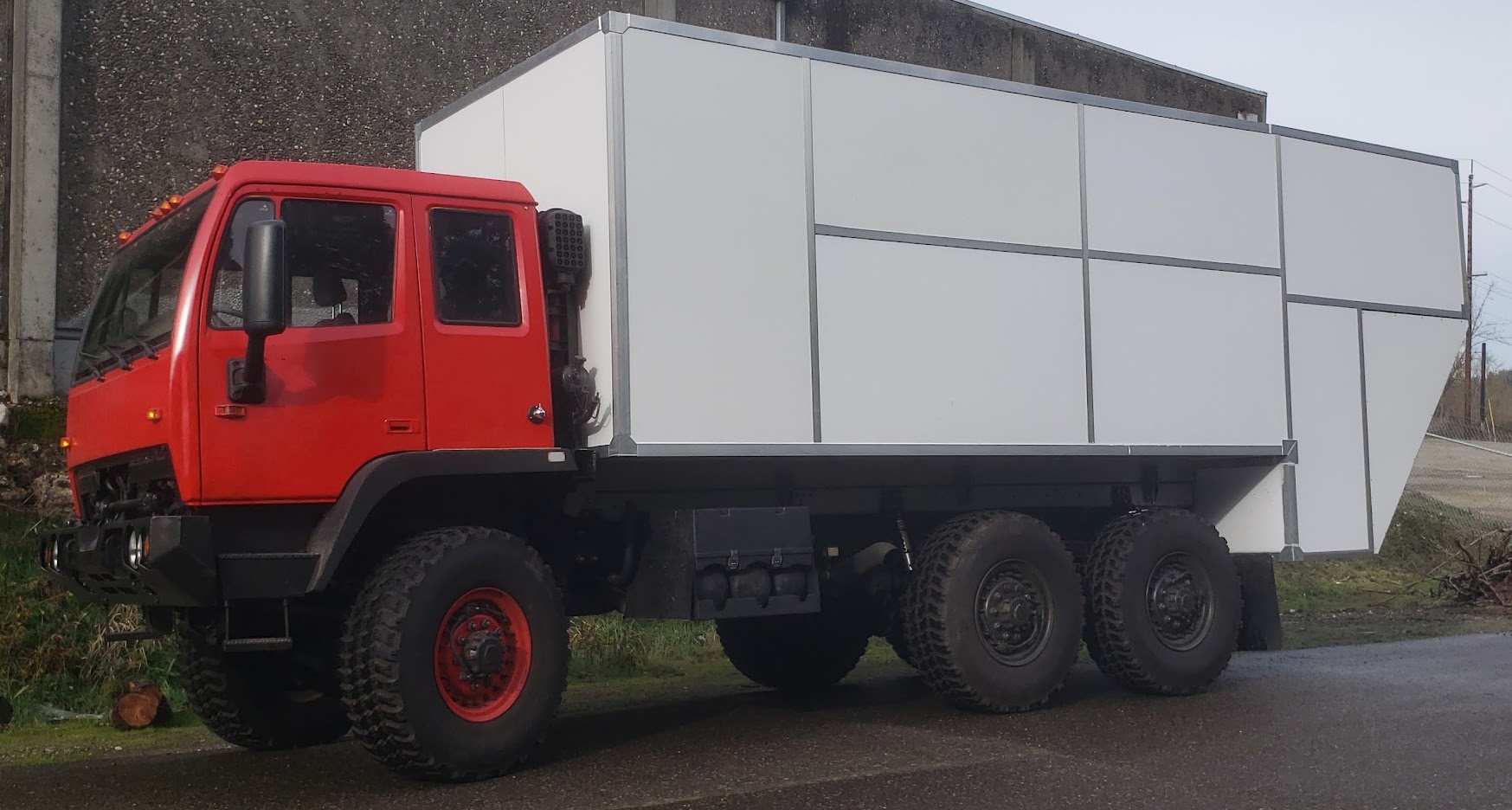 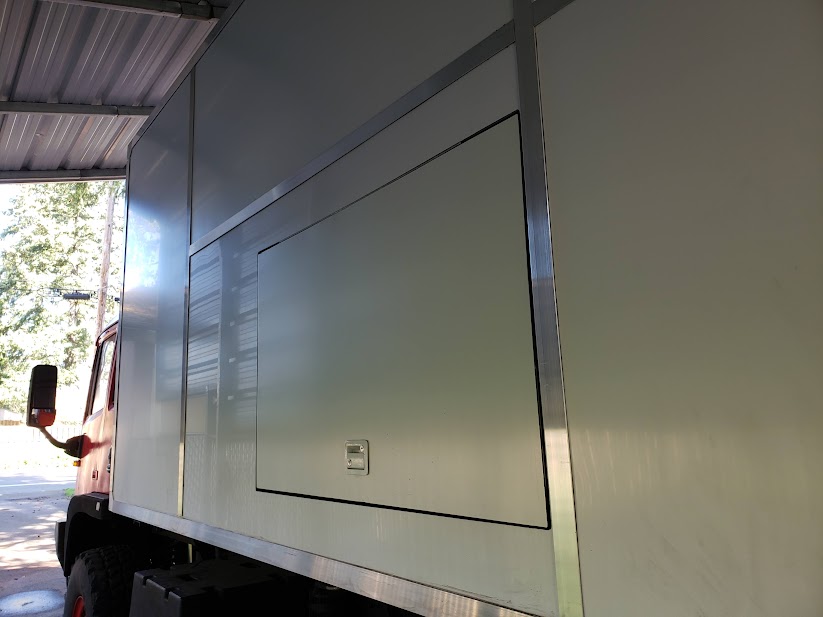 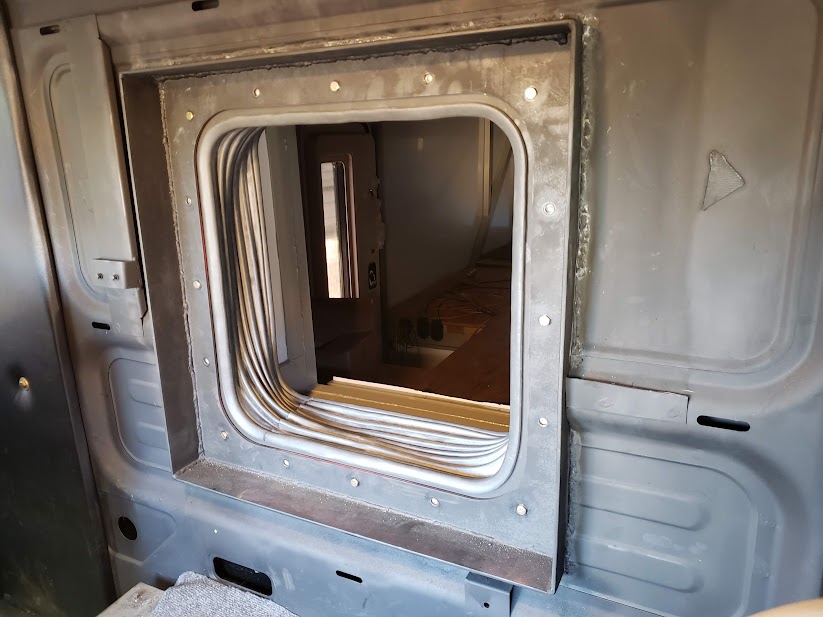 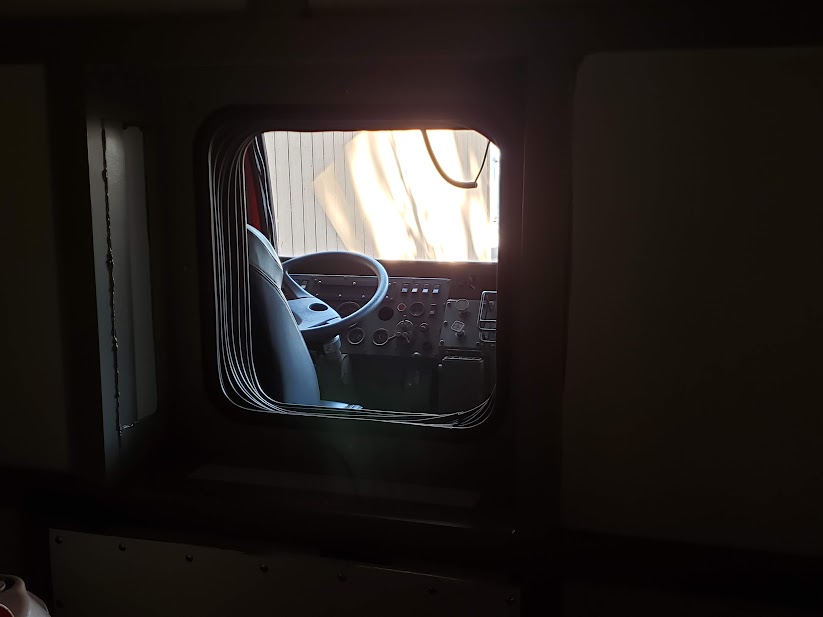 Bathroom layout and construction is next on the list, but that involves a large amount of infrastructure- water tank, pump, plumbing, wiring, drainage, lighting, vent fan... Got my work cut out for myself.

Lifetime Supporter
"Got my work cut out for myself."

'True from the moment you decided to built that behemoth, Chris!!!

Larry L. said:
"Got my work cut out for myself."

'True from the moment you decided to built that behemoth, Chris!!!
Click to expand...

Supporter
Now that the derby is over it's time to check back in here.

I literally hadn't worked on the camper since starting the derby build. I had some work done for the camper, in the name of a ~102 gallon stainless potable water tank which fits cozily between the frame rails. It made sense to farm out the task and I found a local shop which makes a bit of brewery hardware and they really did a fantastic job with it. I ended up working directly with the owner and it was a great experience. They have a good promo guy and took some footage for some promo videos.

Part 1: Part 2: Part 3:
If you watch part 3, you'll see it drops right into place perfectly. He even engine-turned the top panel, although it'll never be seen once the floor is fully installed.

That was about the most I'd done to it in months until life calmed down after the derby. I wrote earlier that the bathroom would be next, but I have started with the bed area, and am getting that usable. B and I intend to take the rig out sometime this month- not for a massive expedition but just to putter somewhere and hang out for a couple days. It won't be much more facilitated than our cargo van camper, but we'll have a pile of space!

To that end, I have the interior walls and ceiling up in the sleeping area with the windows and roof hatch installed. I still need to figure out the wall finishing treatments and what that's going to look like, but the structure is there for hanging the cabinets and building shelving. Things came together this past week:

Still need to build out the forward walls then will break it all down, seal the wood components, and then re-install. Then it's on with the cabinetry and some basic wiring.

Supporter
Nice to see the progress Chris. Our pontoon boat is on the water and had a great couple weeks on Shuswap lake in BC this summer.
I cant or don't know how to attach the youtube link to this site. I have some drone footage.
Some improvements to make but all systems worked well.

Supporter
Reached a major milestone this week- look what's not in its carport: 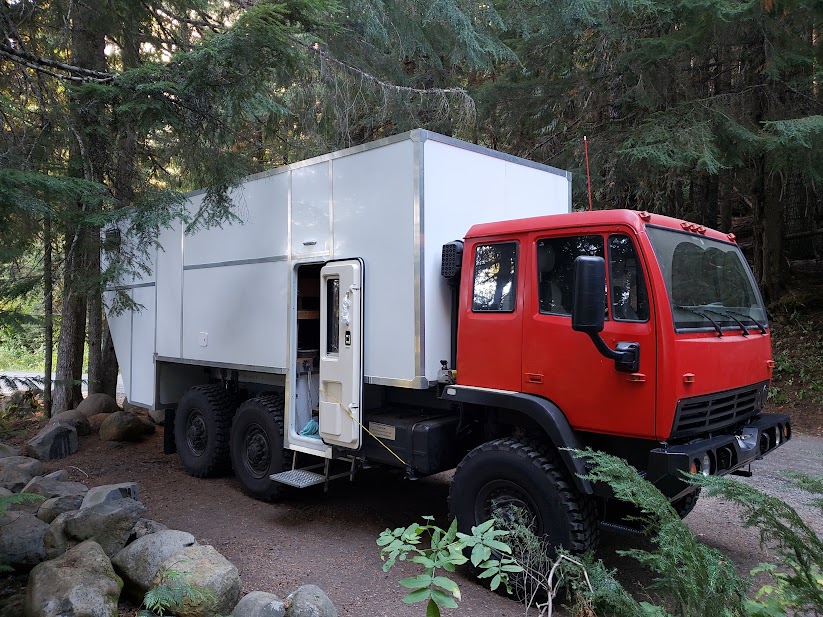 I had thrown together a rather crude mock up of the interior so we could evaluate the layout and see if there was anything which stood out to us as needing to change before really committing to the build out. 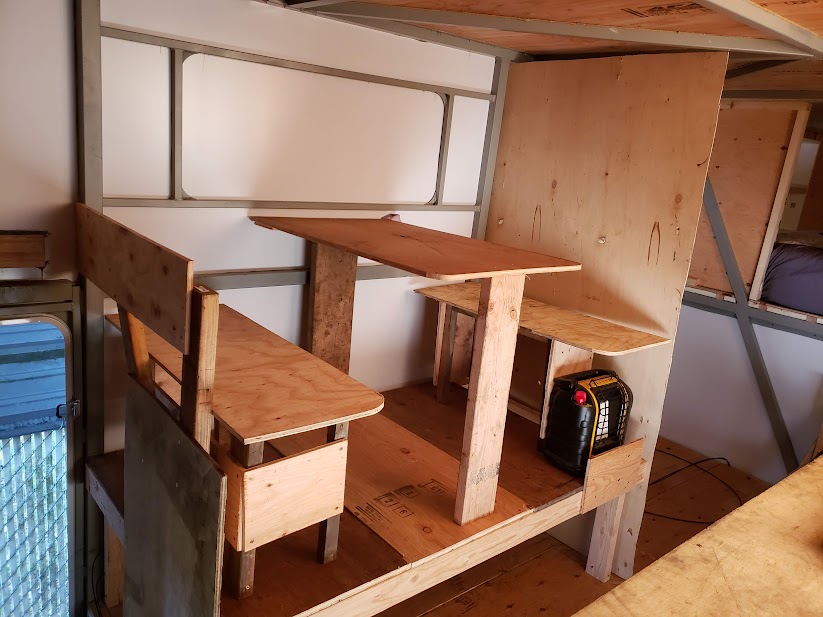 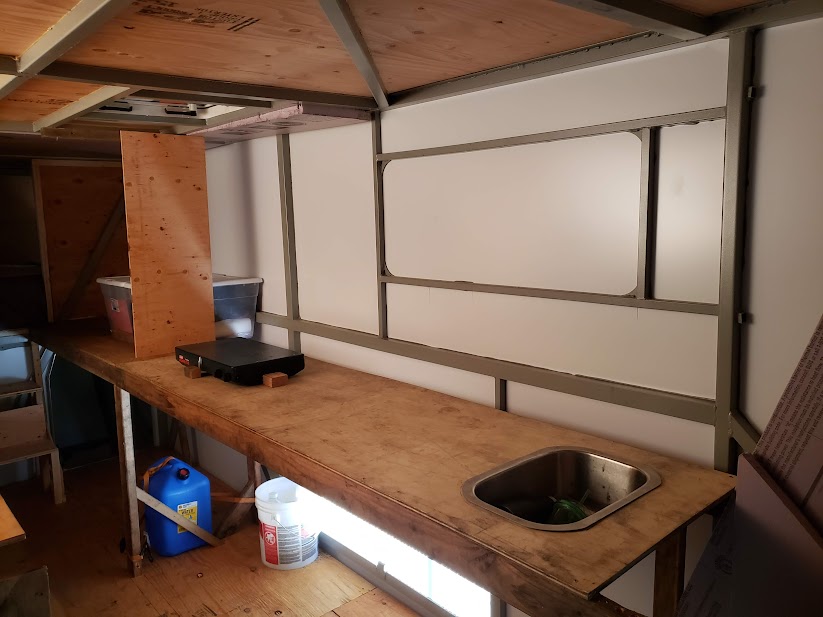 Sleeping area, king sized (there is a window on each side behind the shelving, just out of view): 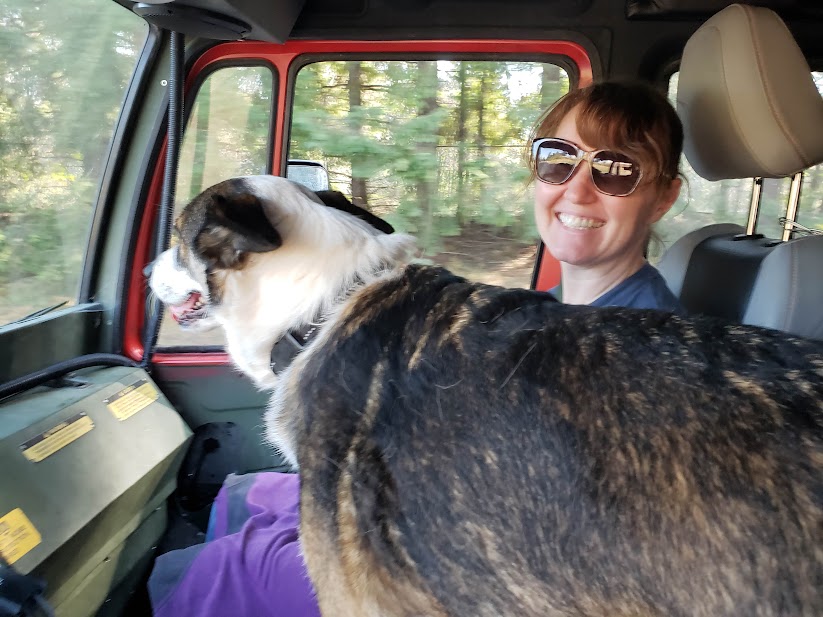 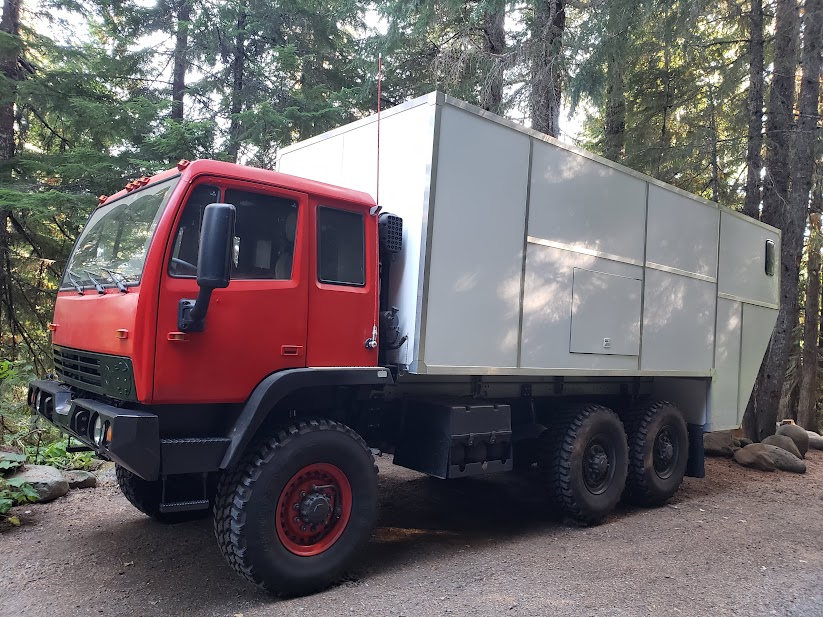 All in all, things went just about perfectly. The truck camped every bit as well as we were hoping- it was awesome to have a real-sized bed, full standing height, tons of counter space... tons of space, period! This rig will never win any open road races- it sits comfortably around 60 but drops off quickly when the road tilts upward with anything more than a mild incline. We did have it on dirt roads though and it just rolled through stuff like you'd expect something on 47" tires to do.

For a first run into the woods, I couldn't be happier.

At this point, the mock up has been torn out to get the mechanical, electrical, and HVAC systems facilitated, as well as finish up the insulation process. I'm sure this will take me a while.... but it's fantastic to have at least one trip in the bag.
F

Will you ad more windows?
With my slide in camper unit I found myself more comfortable with as much windows (daylight & vieuw) as possible. Even roof between the solar panelling.

Absolutely on more windows. You can see where they are "framed in" if you look closely at the interior pics- three more total. A big one next to the dinette, another big one above the galley counter, and then a small one in the bathroom. There are also 2 roof hatches for light, ventilation, and egress (if needed)- one in the sleeping area and one over the galley counter.

The other windows weren't in yet due to not having the walls built out. Their day is coming though!