Very nice, thanks for the link.
K

gtbob said:
Thats an interesting take on it Jac, the long rod motors gain a few degrees more dwell at tdc so they dont really need the added lobe separation. It seems Smokey Yunick was way ahead of his time :thumbsup:

Yunick was a genius. Met him about 15 years ago at Goodwood F.O.S. Just sitting there in the pits quietly dozing in the afternoon sun in his trademark hat. I'm not at all sure anyone knew who he was but I sure did.

It must have been the year before he passed...
J

Bob, & Keith, I look at from another angle. The longer rod can tolerate longer overlap periods, increased duration and tighter lobe centers due to the increased 'dwell' time around TDC all of which allow you to increase power output.

Lifetime Supporter
I'm resurrecting this thread since I had a failure with this motor and wanted to get some feedback.

It was running great and I've had a lot of fun with it, but at Hallet two weeks ago, I was coming onto the straight in the qualifying session, saw the checkered waving and nailed the throttle.

Then I saw the oil pressure drop to zero and my warning light came on.
Killed the ignition immediately and coasted to a stop.

Pulled the engine and disassembled. The culprit is obvious...
A nice new Jesel solid roller lifter disintegrated, pieces went into the dry sump oil pump and jammed it. Stripped the cogs off the oil pump belt in an instant.

I have read a lot about the opinions as to why solid rollers die...
Cam walk - that is not possible in this engine. The cam is running on a thrust bearing.
Too much lash - I don't think this is likely... I checked valve clearance prior to the race and all of them were dead on where they were supposed to be. i.e., in my opinion a good sign that things are AOK after two race weekends.
Poorly manufactured - OK, maybe...
Needle bearings die, use bushed roller lifters - OK, why or why not?

Any other ideas or things to check?
Just the one lifter died dramatically. The others all seem to be fine.
Cam is trashed, obviously.
Bearings all look good, although some of the rod bearings had taken a beating.

It's a complete rebuild for this engine.
It was a blast driving it... come around a corner behind someone, wait until they move over and then squirt by them.

They call this racing, right?
:shocked:

I can only add thoughts / observations from a distance.
1.One of my old clients recently imported one of the ex nascar motors... one very implicit instruction... do not idle below 2000 RPM.

2. Its amazing how much oil is held 'in suspension' in these motors, his old motor was installed in a FF 34 coupe and unfortunately due to space he used a small height wise dry sump tank, any time he buzzed the engine for any length of time it gave variable oil pressure readings since it got bad enough to pull air from the tank and eventually spun a bearing.

3. I am on the fence with regard to bushed or needle roller lifters, I have always been able to find another reason for lifter failure, like low RPM, Lash, lack of lifter oiling, spring stack, pushrod interference etc . Although its obvious that it only takes one tiny piece of trash to get into a needle bearing race and cause havoc. A Magnet in the pan or in a removable drain bung is good insurance to check at regular intervals.

4.EDIT.. Forgot to add this, The lifter that failed.... check back thru everything related to that lifter... pushrod ( bend-contact with cyl head- bid with cup in rocker), Rocker ( contact with valve spring retainer- manufacturing variations ), Retainer ( spring not seated correctly- wrong spring height), Spring ( broken/bent coils or dampers ).
I have seen the tip of a damper coil break off and cause spring bind for example, anything like that can grossly overload one particular lifter and make it look like the lifter caused the failure.
Last edited: Apr 11, 2016
A

Hi Kirby, bummer! Sorry to hear that, but glad it died in anger!

Only thought I could add to what you've already got listed is valve springs - were they the right spec for that cam (spring rate, coil bind height etc), and/or did you miss a shift and buzz it to the moon at some stage - two different ways of getting into instability that might have given the lifters a hard time. Just a thought. Good luck for the rebuild.

Your thoughts are appreciated.

1.One of my old clients recently imported one of the ex nascar motors... one very implicit instruction... do not idle below 2000 RPM.


Interesting. The friend who helped build this engine based on the success he's had with his 'formula' also said keep it idling above 2000.
Do we have a reason for this? Oil pressure?
I'm running 75psi oil pressure at idle and 85-90 at rpm.
It was frosty at Hallet that morning, so I had plugged in my oil heater and the oil was warm in the tank.

2. Its amazing how much oil is held 'in suspension' in these motors

Yes, indeed.
I run 14 qts.
A recommendation from my son-in-law's race mechanic is fill to what you think it'll take, then start adding a half quart at a time until it pukes. That's your oil level.
:laugh:

3. I am on the fence with regard to bushed or needle roller lifters

And I have read/heard many pros and cons about both.
Especially from the BBC guys. Their valve trains seem to hate solid rollers...

I have always been able to find another reason for lifter failure, like low RPM, Lash, lack of lifter oiling, spring stack, pushrod interference etc.

I don't think low RPM is it, although it did idle low for a few minutes early on when first started tuning the Webers.
Lash was correct, as far as me checking prior to the race weekend.
Lifter oiling should be apparent with all the other lifters if it was inherent to the install, but that's a good idea to check that specific one. I'll need to replace the bushing anyway.... we had to hammer the damned lifter out.
We did find very slight pushrod rubbing, but on another cylinder.
Spring stack has been checked multiple times, but we'll check again.

A Magnet in the pan or in a removable drain bung is good insurance to check at regular intervals.
A good idea. I will implement.

4.EDIT.. Forgot to add this, The lifter that failed.... check back thru everything related to that lifter... pushrod ( bend-contact with cyl head- bid with cup in rocker), Rocker ( contact with valve spring retainer- manufacturing variations ), Retainer ( spring not seated correctly- wrong spring height), Spring ( broken/bent coils or dampers ). I have seen the tip of a damper coil break off and cause spring bind for example, anything like that can grossly overload one particular lifter and make it look like the lifter caused the failure.

Will do. Checking springs was 'in the plan' regardless.
I want to change the seals anyway while it's apart.

Andrew,
Yes, they're the same valve springs that my friend has used for years successfully. But we'll check them all again.

Thanks for the feedback. Good stuff.
Kirby
C

I too have had a similar experience. I run a Crane mechanical roller (TR-252-400-8) with the correctly specified Crane lifters and springs.
In my case the axle/pin which holds the bushed roller to the lifter body wore up into the lifter body allowing the roller to contact the lifter, sieze, and wipe the lobe.
I was fortunate in that Crane replaced the lifters (and took the damaged set). I wish I had more specific analysis of what exactly failed. I believes it was a possible heat treating issue, but it could well have been inadequate oil windage as mentioned above. It was during street use, and the engine 'idled' at about 1,250 rpm.
Boy I'm impressed at the sustained high rpm high gear running of your engine.
Good luck,
Steve

Lifetime Supporter
Wow... 2 years since the last posting on this!
An update on the engine... in case anyone is interested.

The motor is still together and running strong.

I had lots of problems with the valve stem seals. They kept disintegrating leaving elastomer and tiny spring bits in the heads which went into the valley which then went into the dry sump oil pump.
I was getting very frustrated...
No, we didn't think they were rubbing on the springs.
Best opinion was they were just moving up and down with the valve stem and getting banged around.

Then I started losing compression between cylinders.
Turns out, the exhaust port plates I had purchased were made out of some shitty cast aluminum and the head bolt torque would just not stay.
I could torque them, come back 10 minutes later and have to torque them again.
The steel 'T' washers were just sinking into the aluminum.

Solutions that seem to work so far are:
Knurling the heads and using slimmer valve stem seals which now have to literally 'screw' onto the heads.

The exhaust port plates have been replaced with new ones made out of 7071 aluminum. That was a real saga machining those....

I also put a screen filter on the valley oil pickup so if the seals do take a dump, they won't trash the oil pump in the process.
Should have done that before...

I ran all weekend last month and didn't break a thing. I was regularly shifting at 8400rpm. No drama.

For the Pantera guys, I also replaced all the A-arm bushings with Heim joints, so the suspension is much more solid.
Some adjustment of the front sway bar and the car is handling about as best you can expect from a Pantera.
Well, I think so... Some new tires would have done me well....

I also got my picture on the cover of 'Victory Lane'! 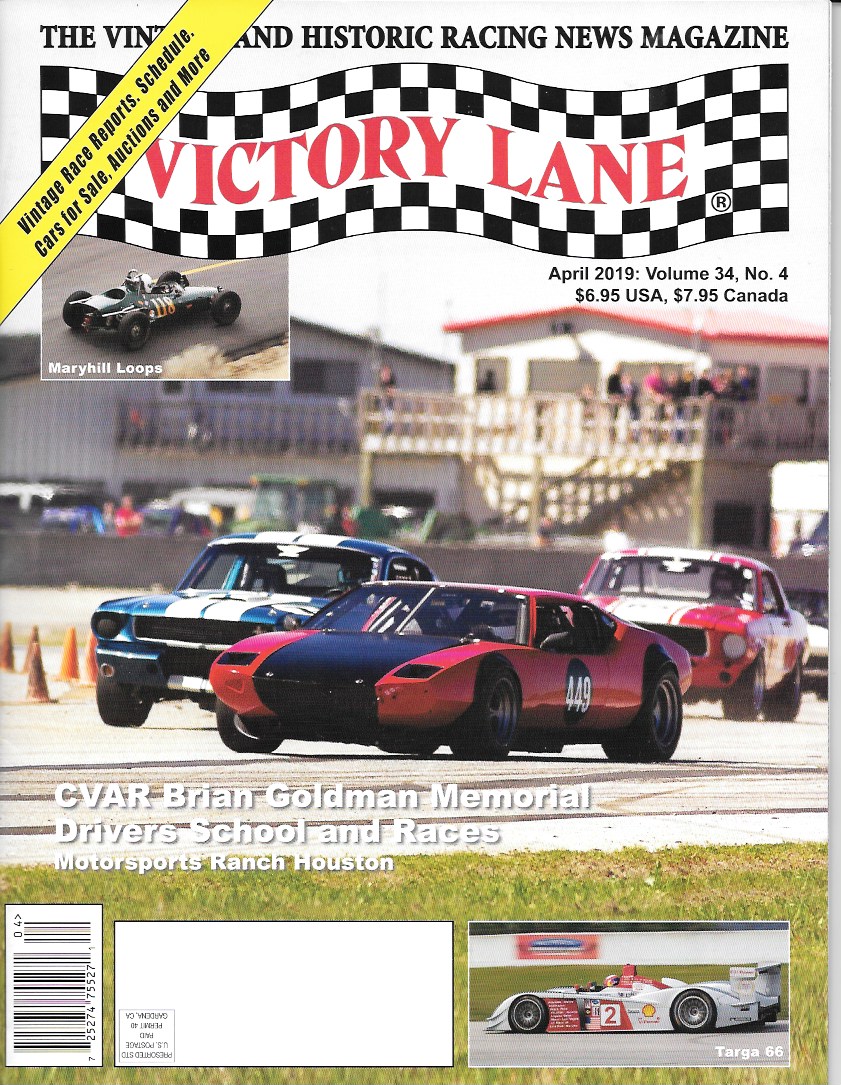 Lifetime Supporter
Oh! I forgot something else.
I was going through MSD rotors and caps every weekend or more often.
I ended up calling MSD.
Once the guy heard what I had, the compression ratio, etc. and the gap I was running... he said...

Oh, my... You are running too much gap. That compression is killing the spark and killing the ignition system.

I did and my rotor looks fine after a weekend.

Staff member
Moderator
Lifetime Supporter
Thanks for the update Kirby. Now I’m going to go back and re read the whole thread.

Lifetime Supporter
I should note the link to the pictures and description.