Supporter
...but it's not what you think.

After winning again last year (and in 2018; and in 2017), I decided to take this year off from the derby. My gravitation to the fielding of a massive team always takes a lot of time and if we're going to go through the effort, it's going to be squarely aimed at winning again. And we also only compete with those cars once a year.

So it's time to branch out.

There's a group in the UK who has designed a spec chassis and organizes hill days with some impressive success, even going so far as to have a national championship or something. The short story is someone over here has planted the SpecKart seeds here in the US and is looking to get something similar up and running here. This past summer I picked up a set of plans and have been slowly working my way through the build. That's not completely accurate- the build has been going incredibly quickly seeing as the hardest thing I have to do is convert Metric to Imperial. The only thing slowing me down is making time to spend on it.

They are not anywhere near as sleek or sexy as the streamliners I have been building. In truth, sleek and sexy are probably the last two words I would ever use to describe them (and even then, probably only with a gun pointed at me), but I must say that they have grown on me. I got to spend the day running them down a hill in the Gorge last fall and had a blast, and running them all down in a pack with similar performance puts a lot more emphasis on driver and prep than the pusher or design you chose. We were actually racing, drifting through corners and drafting down straights. It was fantastic.

Me at speed in a borrowed ride: 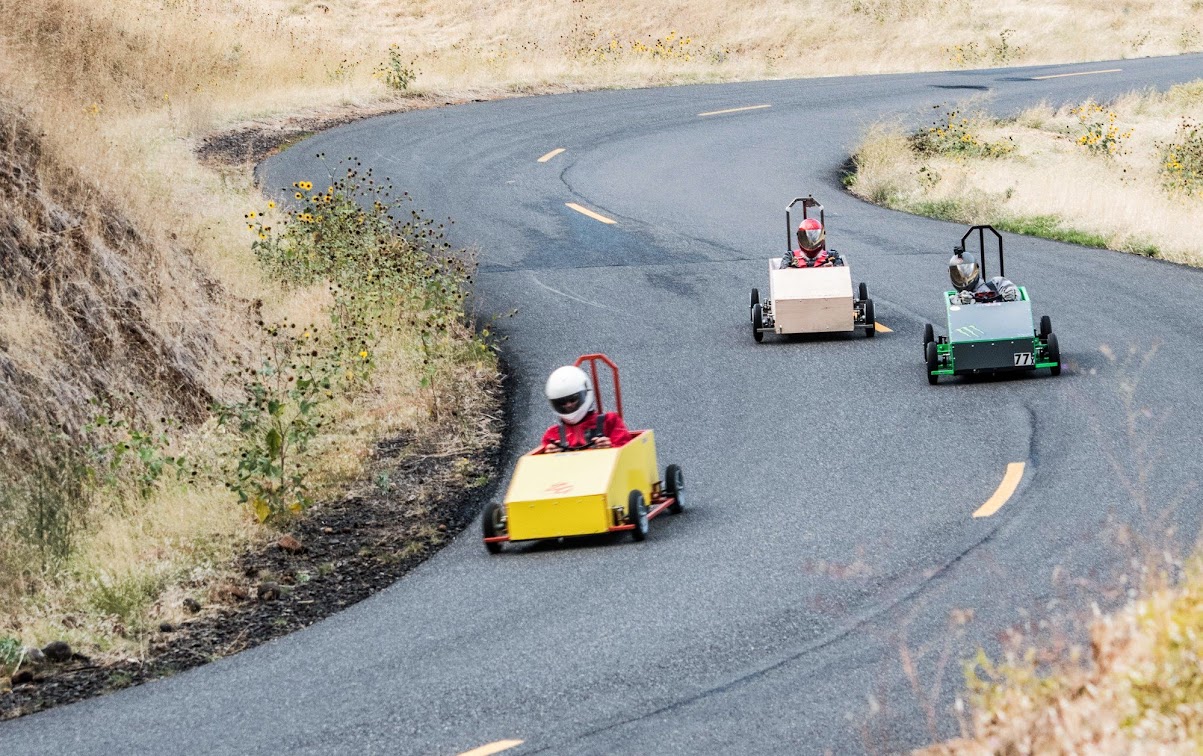 Cutting to the chase, there's an event presently scheduled for April. With some luck, it might happen, and I've been building it with that event in mind. There are 3 other events on the calendar for this year, and the venue is phenomenal (all at the same place). We run with the long board and street luge group who host the events- great people, fantastic setting, fun rides... what more could you ask for? Maybe a pic of my build? Oh, yeah- no problem. Here it is: 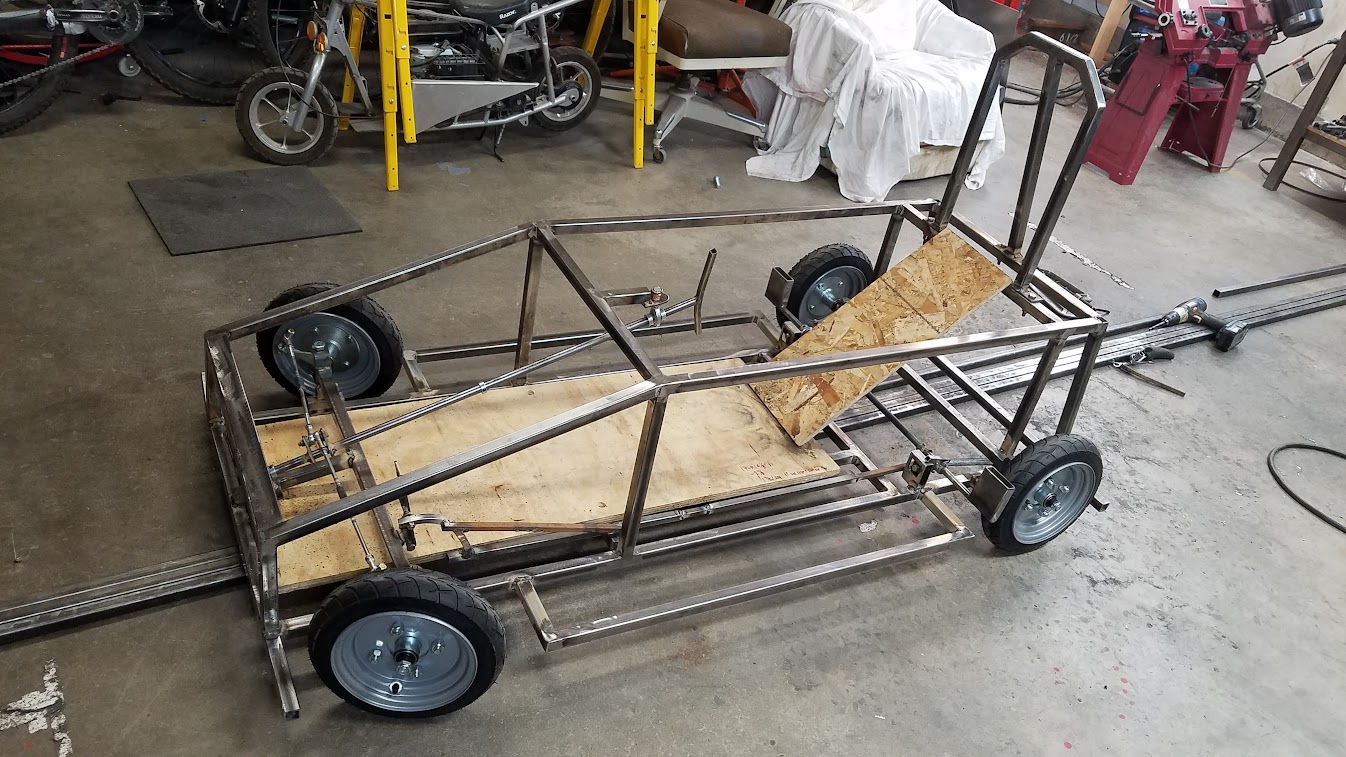 The neighbor kids gave it a shakedown for me today and that went well. Time to strip it down and paint the frame, then get some body panels painted and mounted, then get it liveried up. Looking forward to really getting it on a hill, fingers crossed for April!
Last edited: Mar 20, 2020

Supporter
A few triangulation members would be well worth it.

I know where you're coming from but with no suspension, I think it's just fine. There is no discernible flex. It's also a spec class and design, so the intent is for identical chassis and not to change it (there are a few changes I would make if I was responsible for the design but didn't during the build). I've seen some of the abuse dealt to them and they are quite stoutly built (0.120" wall 1x1 tube). I'm not worried.

Supporter
Roll bar built and bolted on. Frame is painted. Starting on the bodywork, although it's a bit boring after the other builds I have done. 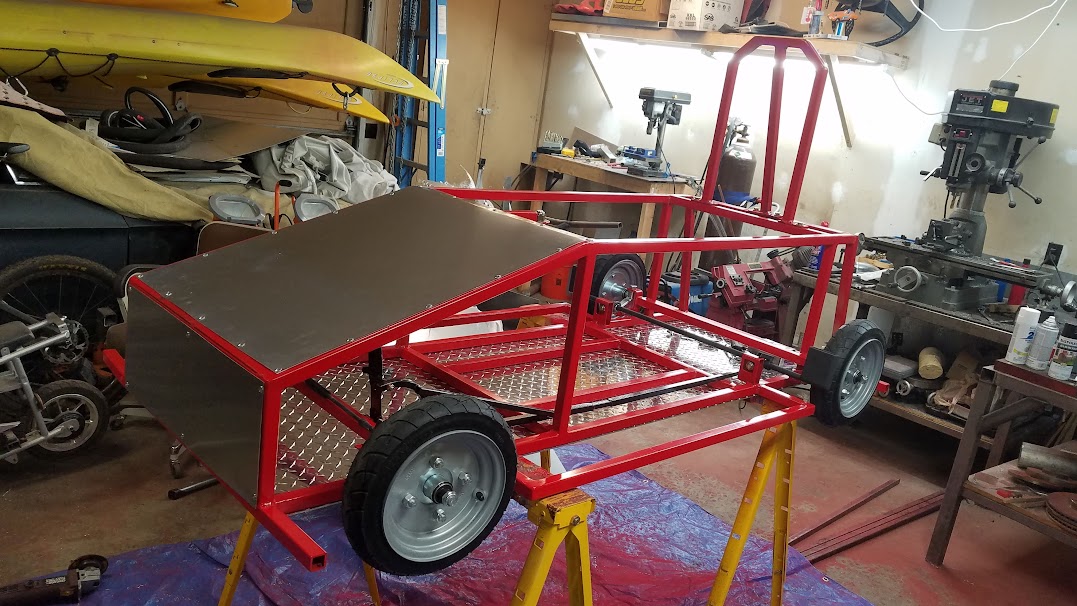 What do you think it costs for materials to build one on those cars? Link to spec info?

We'd LOVE to have you on board. The originators have their UK site:

I think I have 60' of 1x1x.120 and 20' of 1x1x.060 in it, so whatever that is locally for you. The plans plus 4x wheels & 4x hubs were bought at the same time for ~$100, and the rest I piece-mealed together from ebay and "fun kart" sites. I tried not to keep too close an eye on the total bill and have built it up the way I wanted (splurged on a thing or two) but the US organizer figures a budget build can be put together for ~$500-$600, depending on how hard you hunt for deals or find used stuff. The build is enjoyable but certainly a wildly different experience than building my other streamliner cars. Running them down the hill together is a blast! They handle quite well, are rather robust, run in a pack/draft easily, and are fun to lean on each other. The only downside to them is the brakes are pretty pathetic, but pitching them sideways to scrub speed is quite effective- and who needs brakes anyway?

The April event has been cancelled but there is another in June, come on up and check it out. You'll be totally hooked. 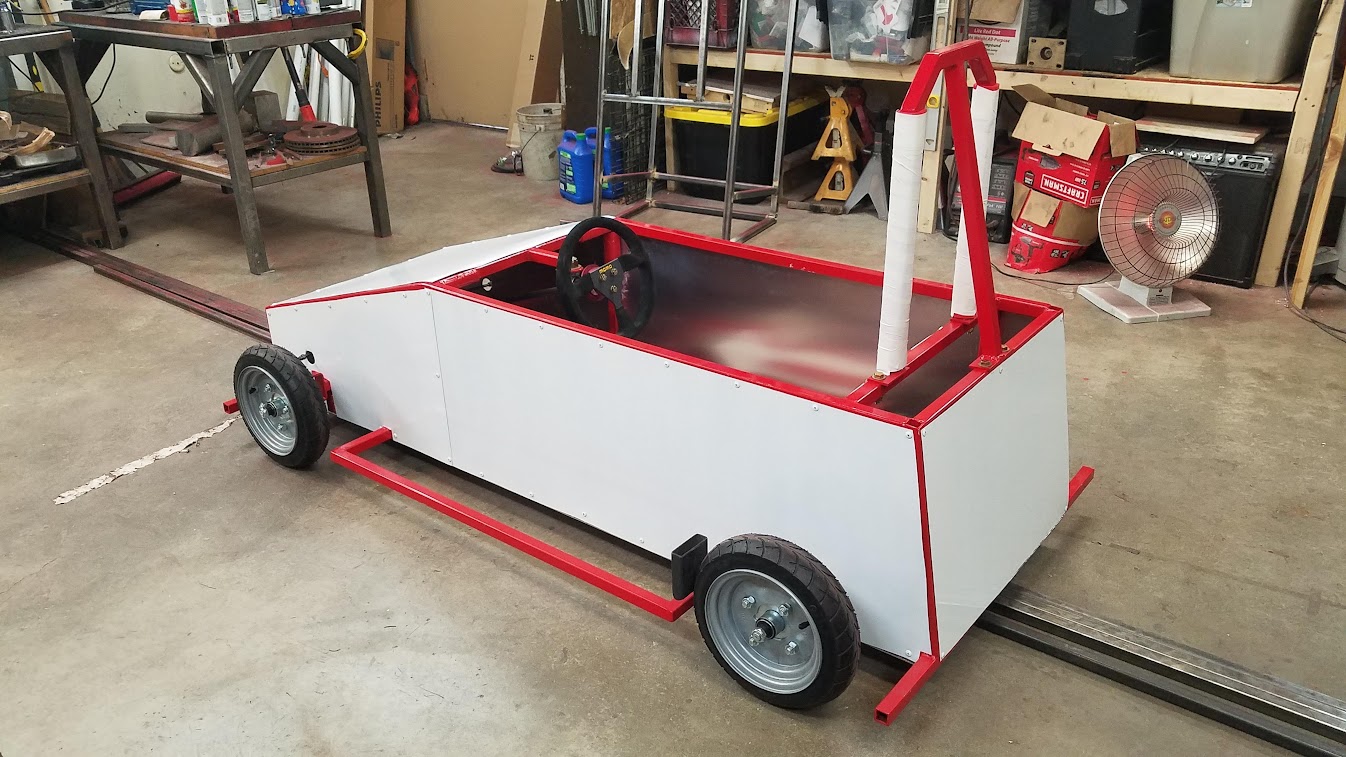 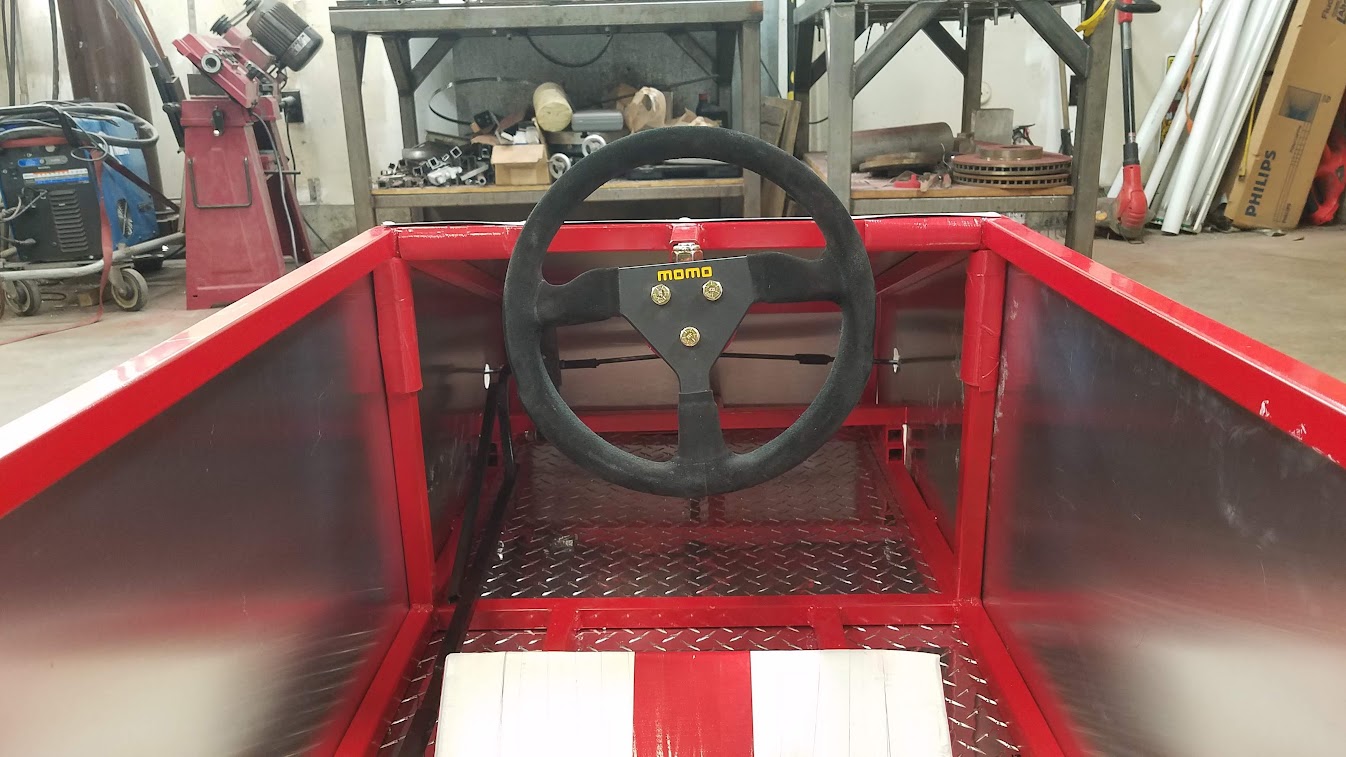 Just needs an alignment and harness now, then it's off to tweak it.

ckouba said:
Roll bar built and bolted on. Frame is painted. Starting on the bodywork, although it's a bit boring after the other builds I have done.

Chris, looks like you have the same tools / weapons as I do, can you post some plans or dimensions thanks. Russell

Supporter
Only a year and change later, I finally got out to use the SpecKart... 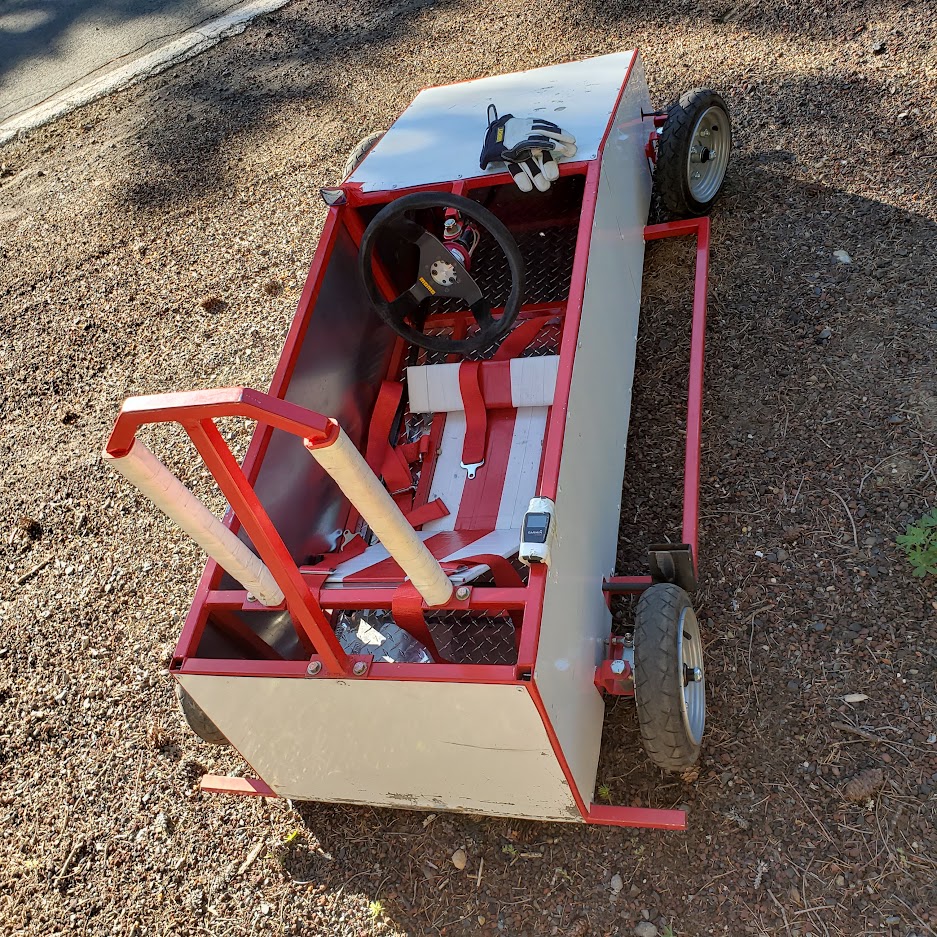 No pics in action as it was pretty squirrely and I didn't want to take my hands off the wheel. I have a few things to follow up on to take slack out of the steering but they were a BLAST on the lower speed, twisty stuff. On the open sweepers and fast straight, bumpy sections, they were a handful. Still fun, but definitely kept your attention.

Video is to be had though, will post when it's online (I'm not doing the editing though).

As an aside, the Portland Adult Soapbox Derby for 2021 has again been cancelled, but sounds like it will be picking up again next year. No streamliner build for me this year......
M

Needs 20" hoops and some Lego sponsorship.
What paint finish is that? Gliden?

Supporter
We finally got an event in, although due to work stuff, I didn't actually attend. My kart did though, and it was fantastic (so I was told): 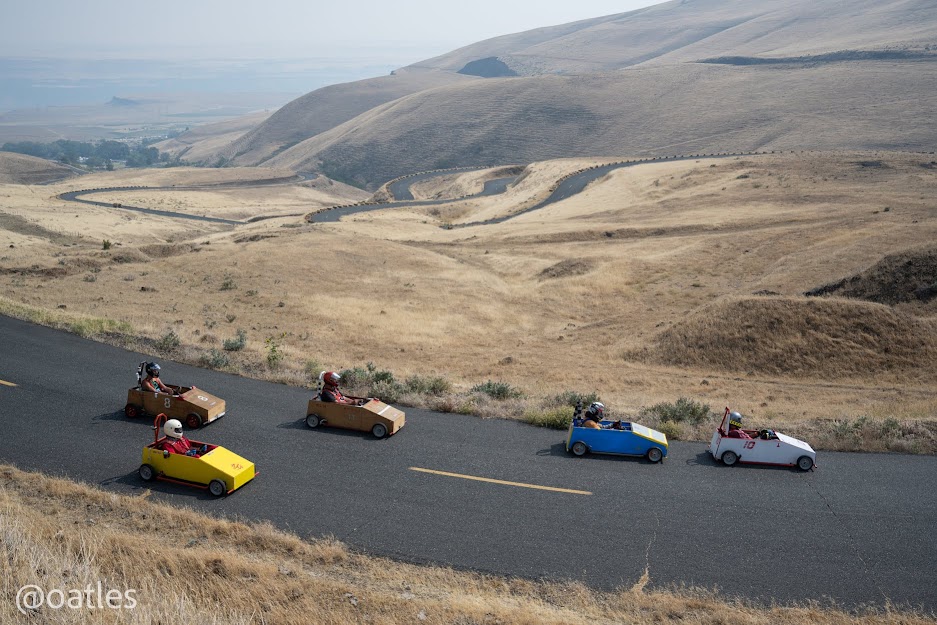