That looks really nice, these are some of my favorite builds on this site

Supporter
Thanks Kevin, they are a monumental amount of fun and a great stress relief. Glad you're enjoying the posts.

The first round was dry enough that I managed to slap a little more joint compound on the car. Doesn't look much different but the canyons which formed while the first coat was drying are now filled in: 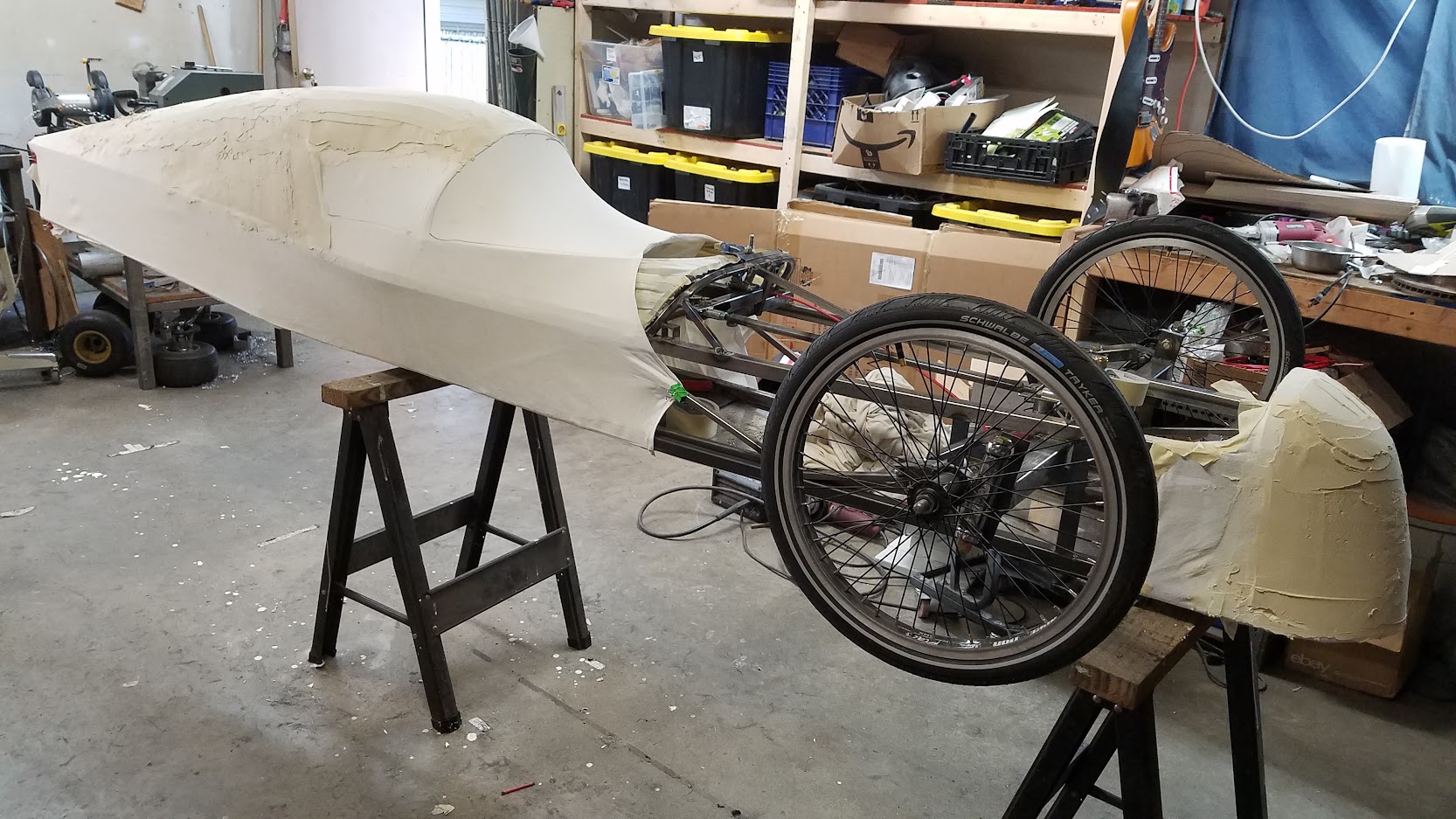 I do expect more to form as this layer dries though. Maybe two to three more thin coats before this is all over. I picked up the material for the windscreen and side windows, and it looks like that should go together well. Need to get the body faired in and glassed, and then I can start on the real finishing steps. 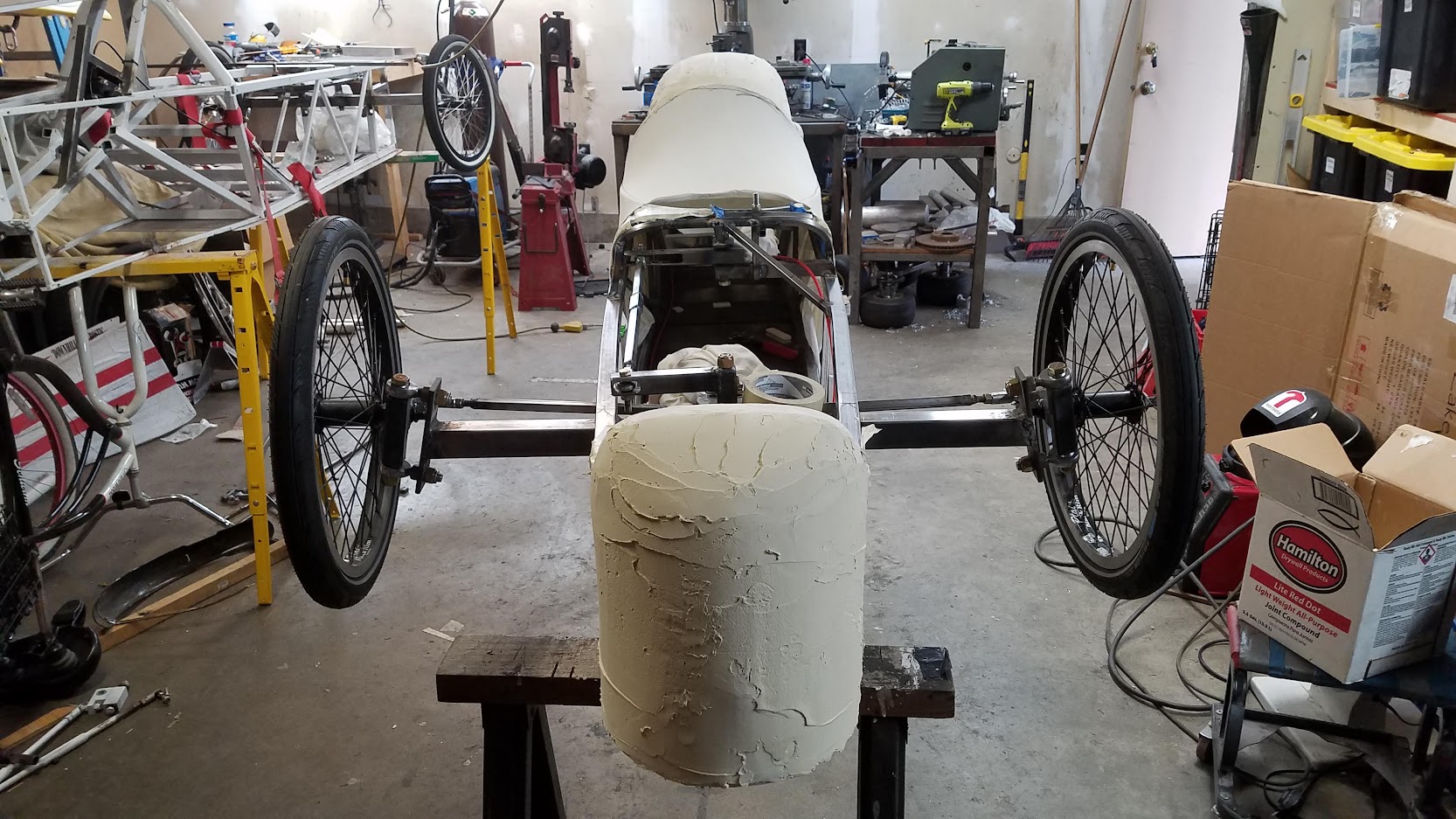 Supporter
It doesn't look like much but glacially speaking, progress is being made... albeit quite slowly: 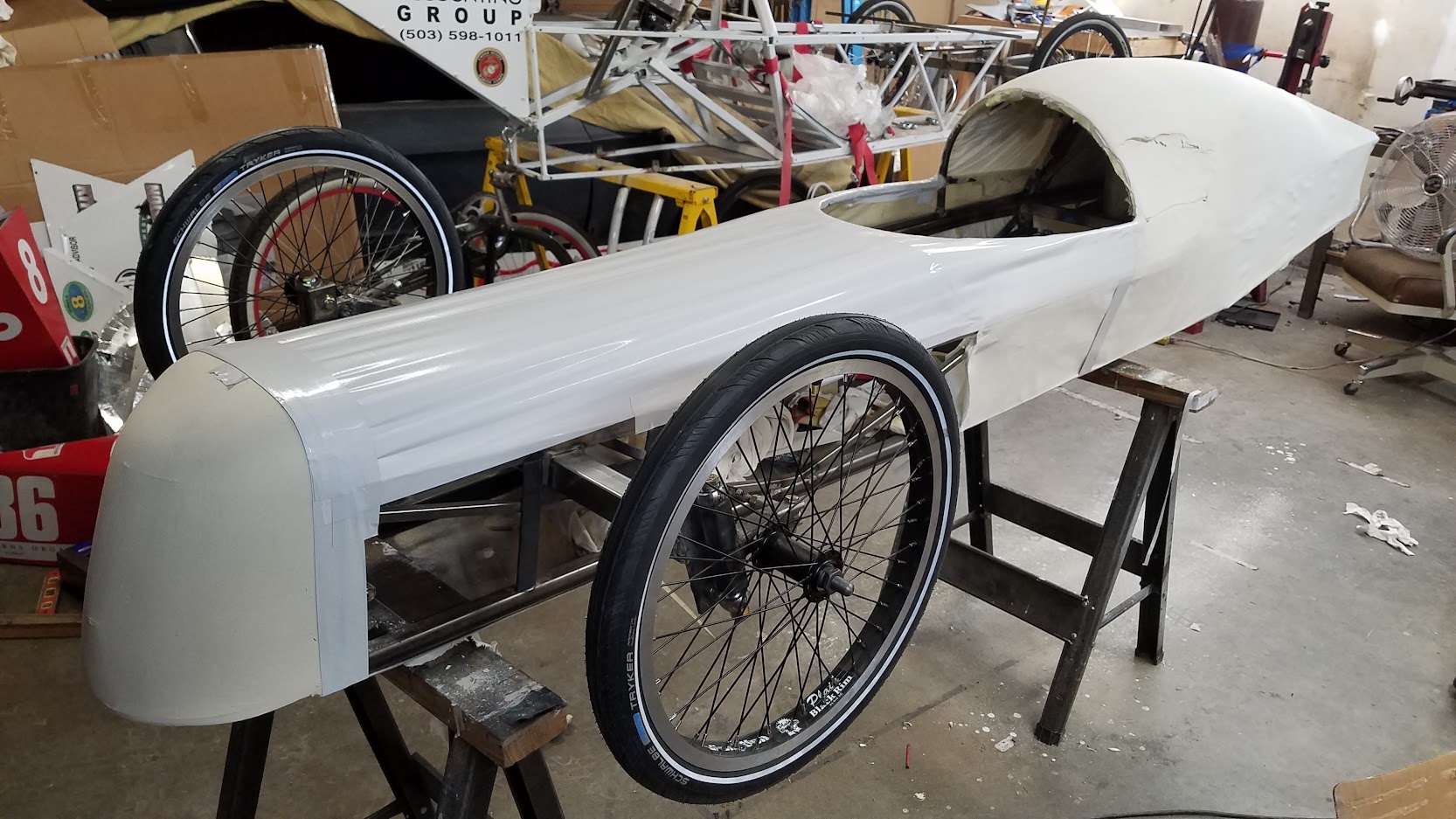 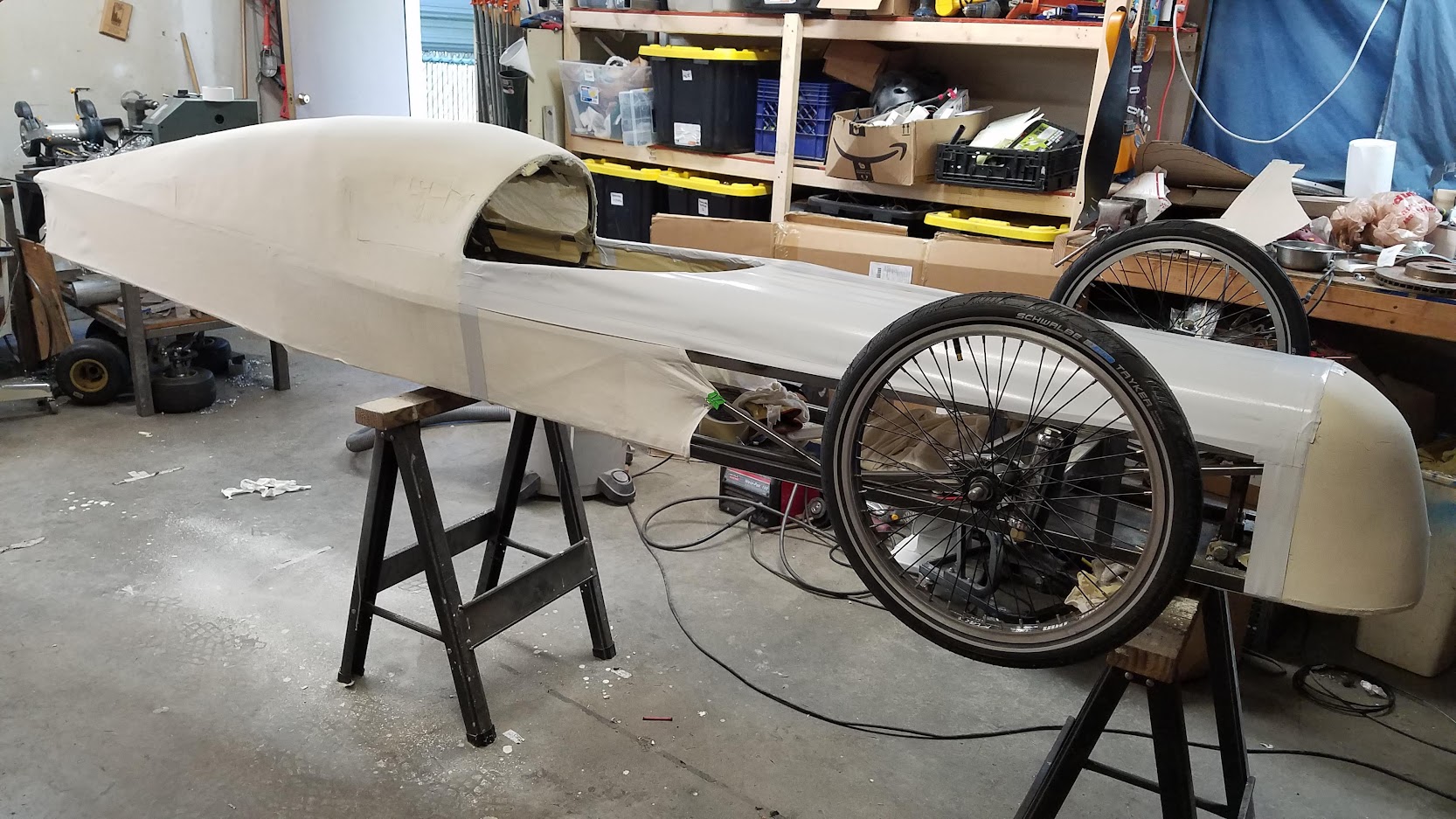 I have a little more shaping work to do as I'm not completely happy with the transition from the windscreen structure to the roll structure. The side windows will be cut to the appropriate size once the shape is finalized. The windscreen is shaped and should be ready to install once the glasswork is finished- just needs some mounting tabs added.

Once the glasswork is done, there will be a large amount of fairing of the surface to fill the cloth texture, but I certainly know how to sand. I am pretty happy with how its shaping up though. It's turning out in the shape I had envisioned and I like it. Hopefully it will be as fast as I want it to be as well.

Our first test day this year is next Thurs. Not completely certain that this car will make the load in but definitely trying for it.

Supporter
Glass is now on. All surfaces have at least one layer, but some only one. Nose and cowl are glassed enough and ready for filler, etc... Tail section needs a couple more layers. It came out a little rougher than the Mk V so I will have a lot of finish work to do, but it's getting late and it's time to get on with it. 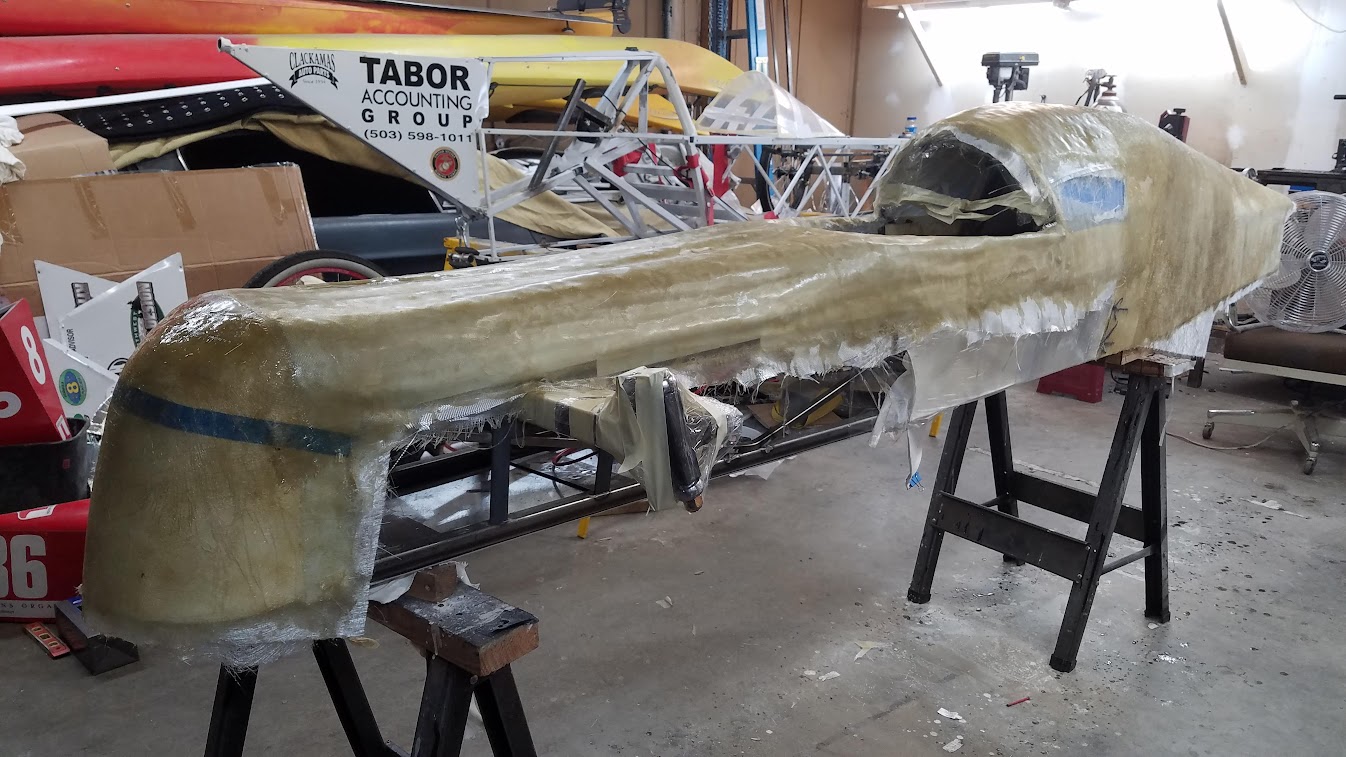 Supporter
I took a pic with the windscreen template in place before the resin exercise began and was quite happy with the result: 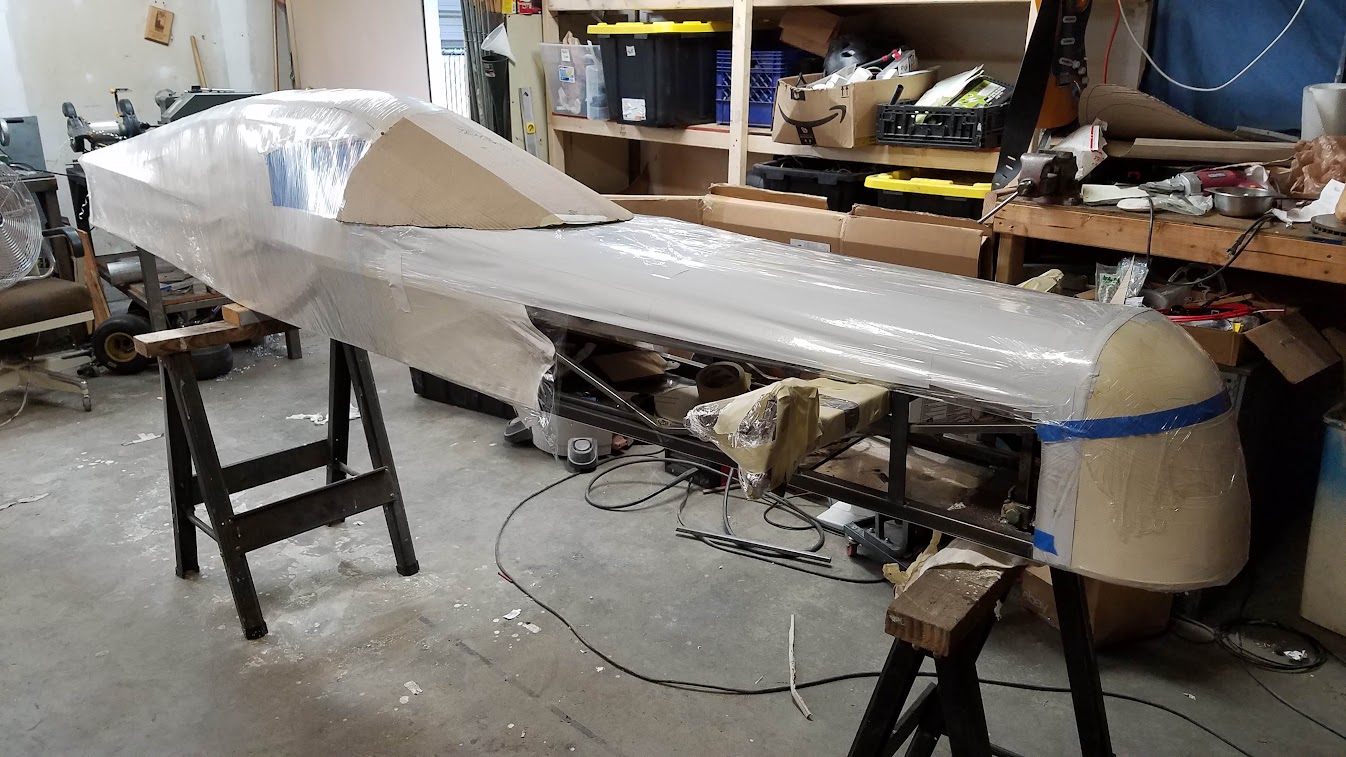 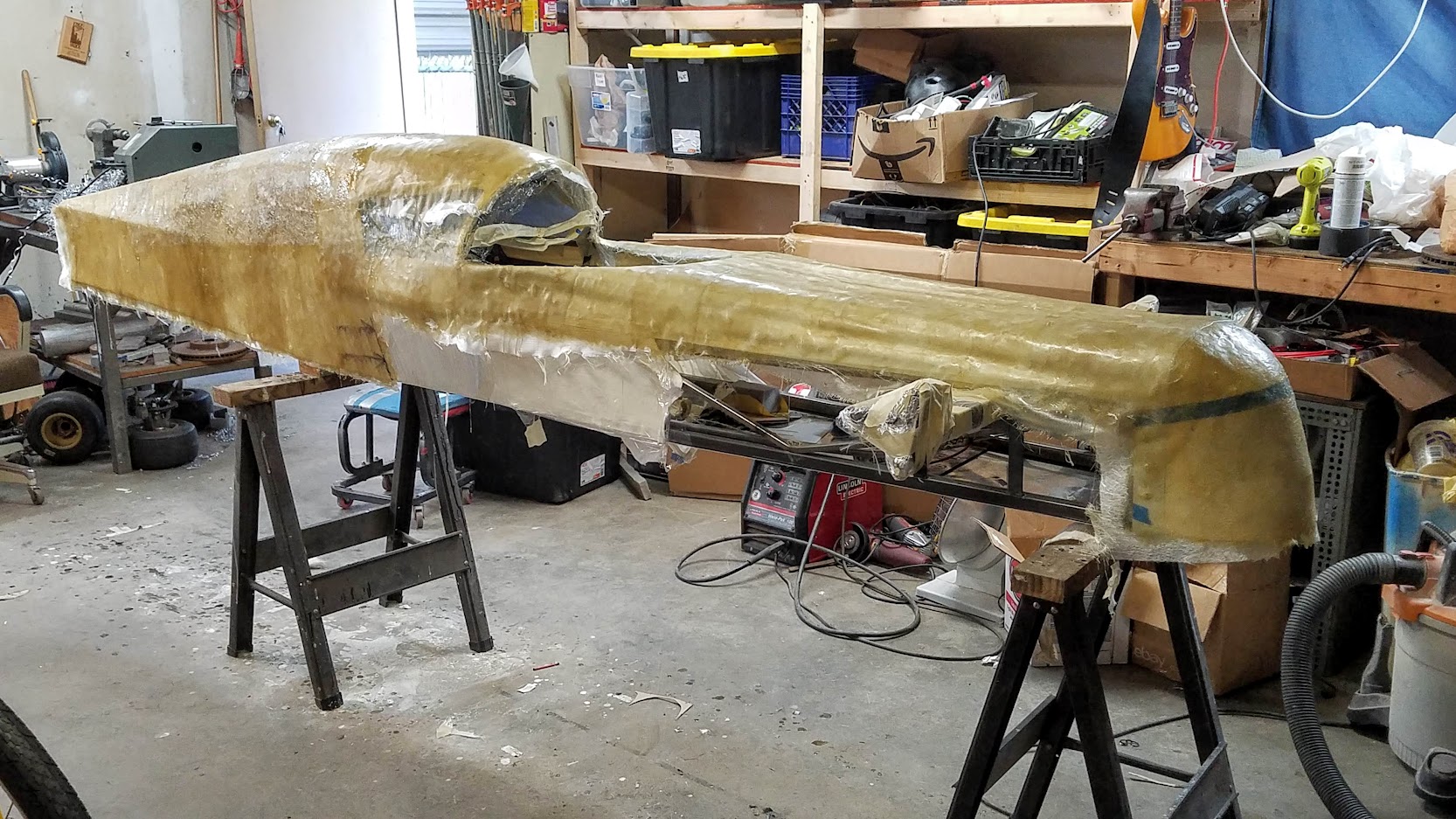 May need a little more in a place or two but I think it's robust enough. Starting to separate it from the chassis underneath to break out the joint compound and stringers. Will need lots of fairing to level out the surface but it's something I can conquer.

Our first test day is Thurs. This one won't make it with a body on but I am hoping to get a run or two down with just the chassis with its paneling. We'll have the Mk III, Mk V, and Mk VI with a handful of drivers. Need to give the Mk V a check as it's sitting in the shop exactly as it came off the hill last August!

Admin
This has gotten beyond serious!
J

This darn thing kept me awake for ages last night...Trying to visualise a camber steer arrangement for the front end, have to be for next year though. One question... how sharp or what radius ( approx ) are the curves on the downhill courses that you run on.
F

I used to dream of building a GT40... having the time to think about each part, planning what it should do, having the patience to make it perfect. Now..... all I really want to do is build a gravity racer each year.

This is still one of the coolest build threads going on. Thank you for sharing, I enjoy watching the progress.

Supporter
Ron - You have no idea... There were 5 of our cars on the hill yesterday for testing, all of which went extremely well. See below.

Jac- You get me a concept, I will build it.

Kevin - It is one of the most enjoyable things I have ever done, from the engineering side, the building side, the teamwork side, the testing, and specifically- the results! SUPER fun!! If you're anywhere near Portland for the third weekend in August, drop me a line.

Supporter
Sooo..... Test day #1 for this year. About a month ahead of last year's timeline but still way behind where I want to be right now.

There were 5 of the 7 Scuderia cars on the hill. The original winner, the Mk I, last year's winner, the Mk V, one old build, the Mk III (looks like a mini sprint car), and two new builds, the Mk VI (a 3 seater) and the Mk VII (my ride this year; another streamliner).

The objective for the day was to get seat time in the new builds and get the new drivers for this year some seat time in the old builds. Seat time for me in the unfinished Mk VII was last on the list. Things went well on all fronts.

The Mk I was on the hill for fun. It's not entered this year but since we were going, why not make some runs... It was enjoyed effortlessly by those who ran it down, clearly benefiting from two seasons of testing and development.

The Mk I staging at the top of the run:

The Mk III is not a speed build per se, but its build was for entertainment and it's being run down the hill this year as part of a fundraiser for a local school. The bodywork was themed and painted by the school's third grade class and is adorable! It ran well all day, not setting any speed records, but made it down with no issues and just generally made passes. 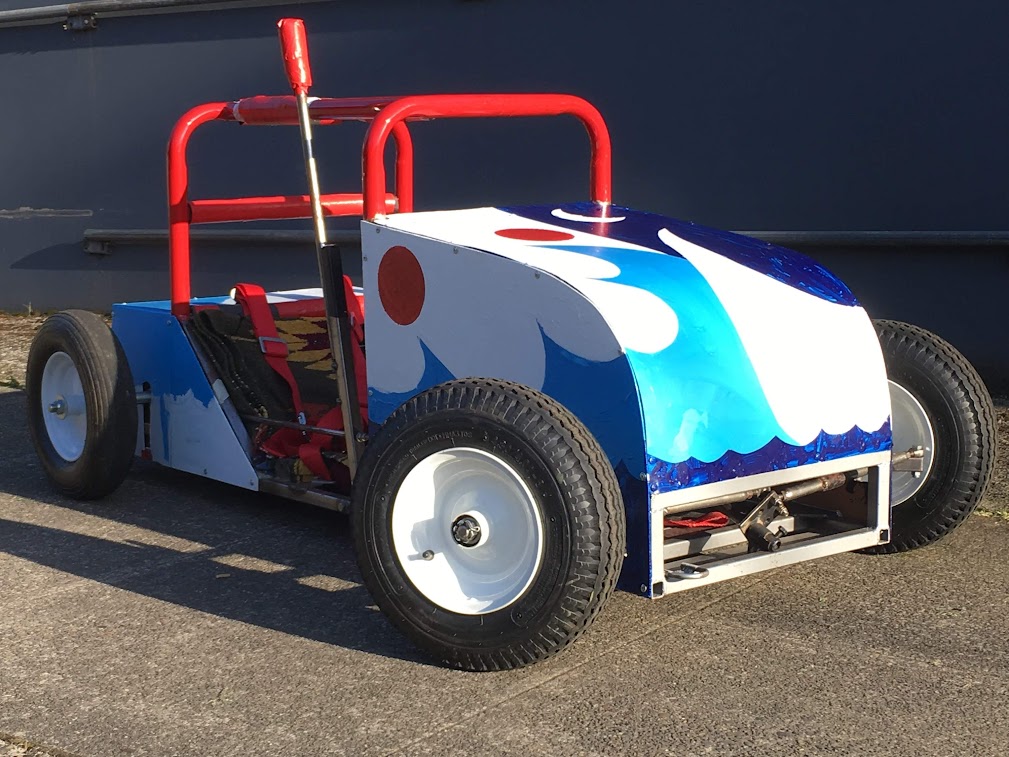 The Mk VI made ~8 passes, with only minor issues which were all addressed after each pass. It was logging some impressive speed numbers- despite its size, it would achieve the same speeds as the Mk I car, ~47 MPH. The questions for race day are how well will it accelerate due to its weight and how well will it be able to get that weight around the Learning Curve. We're still looking for a comparable piece of pavement to test that capability (can't run down the park road outside of the event).

Shutting down after a pass, Jenny behind the wheel and Jodi riding shotgun: 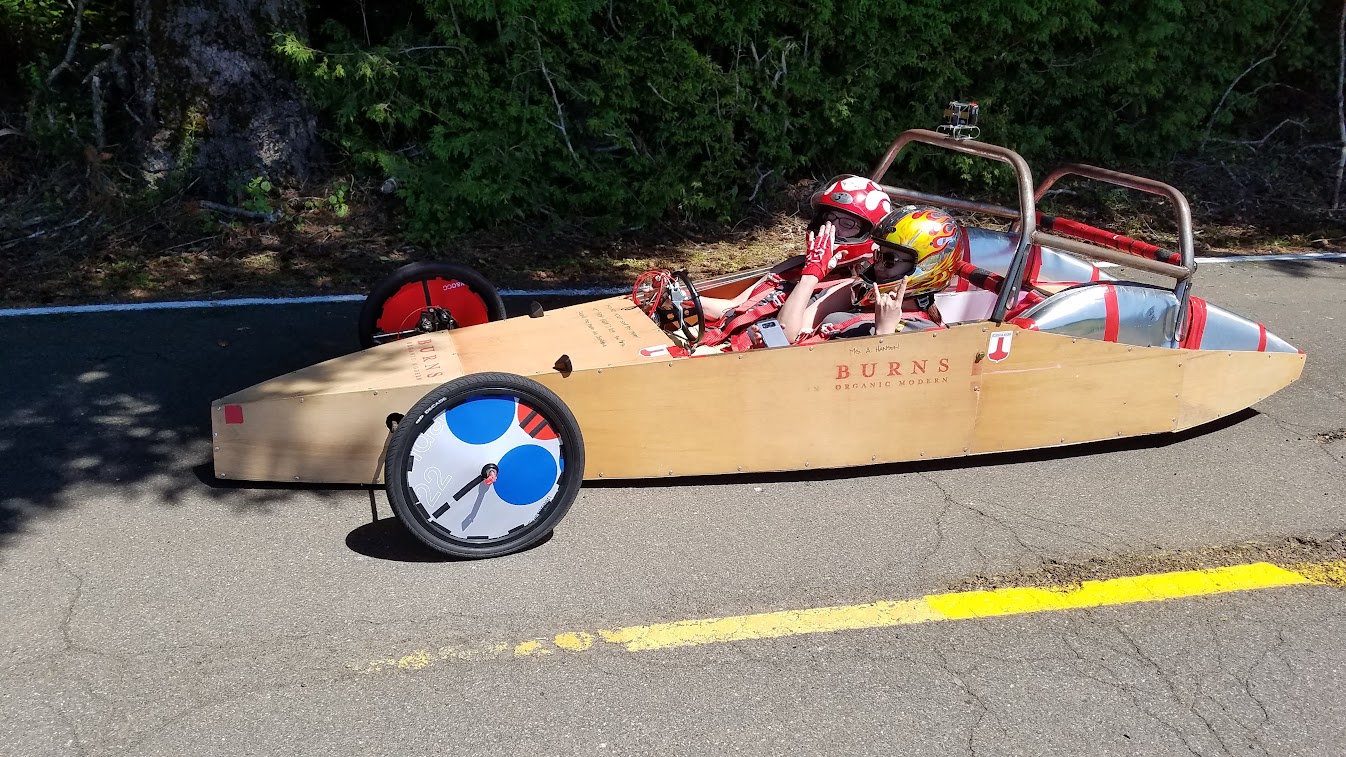 The Mk V is entered this year and will have two drivers sharing the duties. The day's objective was to get them comfortable with the car and its handling and braking. It was worth the effort as it's apparently a little intimidating to latch into and take down the hill. After a half height pass for each of them, they went to the top and started making full passes. By the end of the day they were both much more comfortable with the car and pulled a 51 MPH pass out of it. We will do a little seat work between now and the event but it's off to a good start for the new drivers.

Ready for load in: 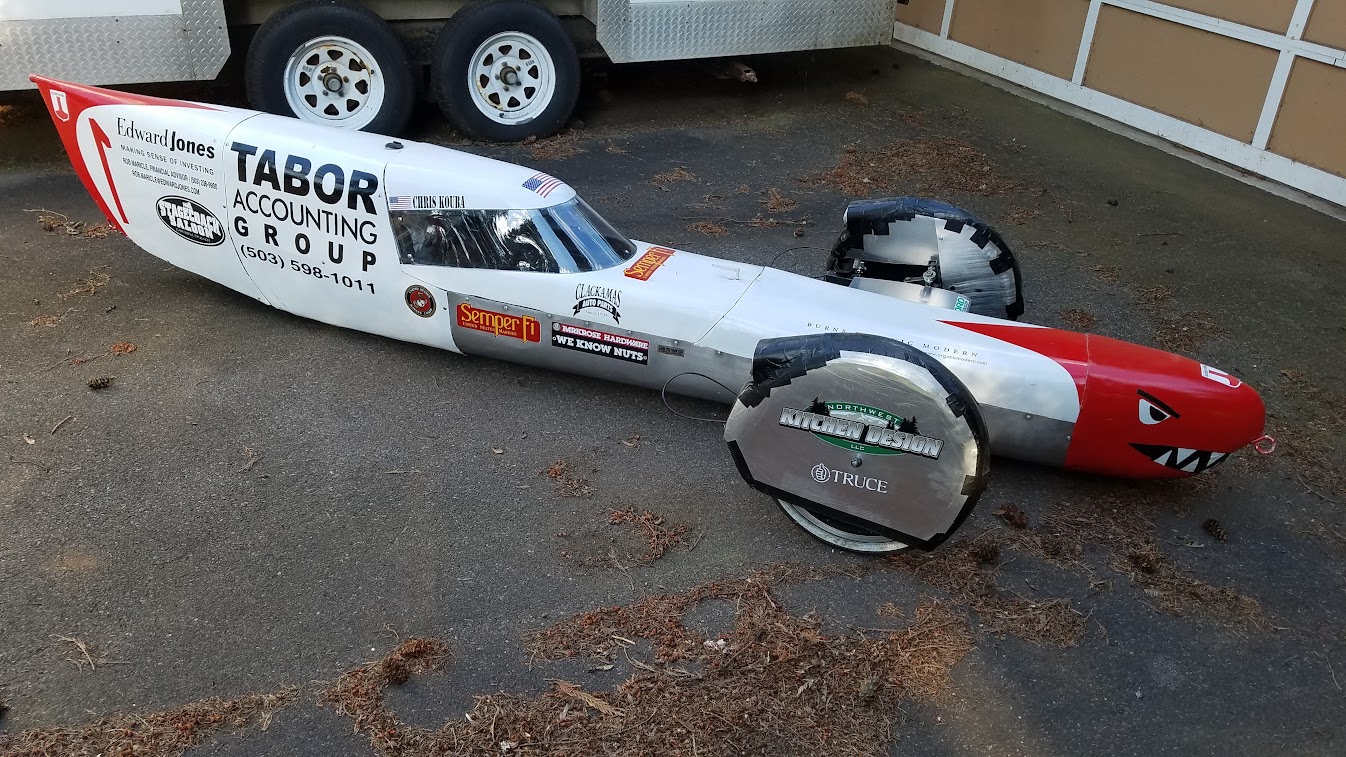 I only got to make two full passes with the Mk VII, and didn't have a GPS for the first one. It is incredibly fast though- in the configuration you see here (nose cone, side panels and floor), I managed a 52.2 MPH pass. I truly look forward to what the canopy and full bodywork will do to that. It still needs wheel discs, aerofoils over the axle beam, and wheel pants as well, but I am extremely pleased with that number as a baseline!

The towback up the hill:

All in all it was an incredibly successful day and things bode well for the team going forward. It's time to get the Mk VII bodywork finished, get the Mk II front end re-build completed, and log some more test mileage for all this year's entries.

What a day though!
J

where is the course for this in Portland? is there a link you can share for the event and rules? Thanks, Jim

East side, in the park on Mt Tabor. Runs down the service roads for the reservoirs.

Rules for the car are fairly simple: less than 5' wide, 8' tall, 12' long, 300#, and $500. Scrutineering is fairly modest but you need to demonstrate some sort of braking capacity. There are "speed" cars (ours) and "art" cars, which are pretty well done parade floats which end up going faster than they probably have a right to. There are a bunch of administrative rules and such, but the build side of it is wide open and I love it.

Supporter
A little more work... Windscreen fitted, side windows started, canopy and tail bodywork fitted. All still need smoothing and fairing but very stoked in how it's coming together: 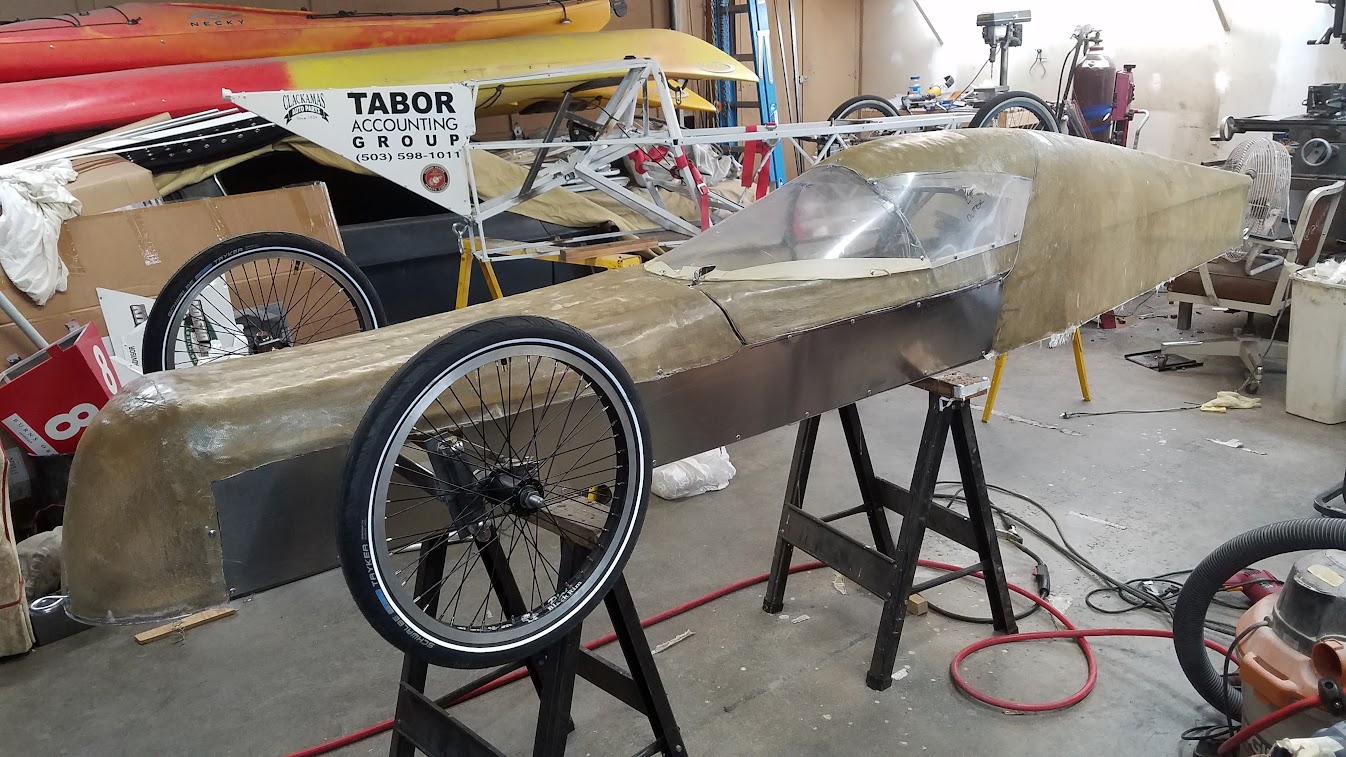 Supporter
More glacial progress- the first dabs of body filler have been put on to even out the roof line. My buck wasn't as well-prepped as it should have been and I have a bit of glasswork to do. The body isn't quite symmetric in a couple of places and it will take a little effort to get that rectified.

I did the first pass at the canopy to even it out and it does appear to have gone pretty well. Putting this thing back on the floor really reminds me of exactly how small it is. The shop vac is taller than it is! 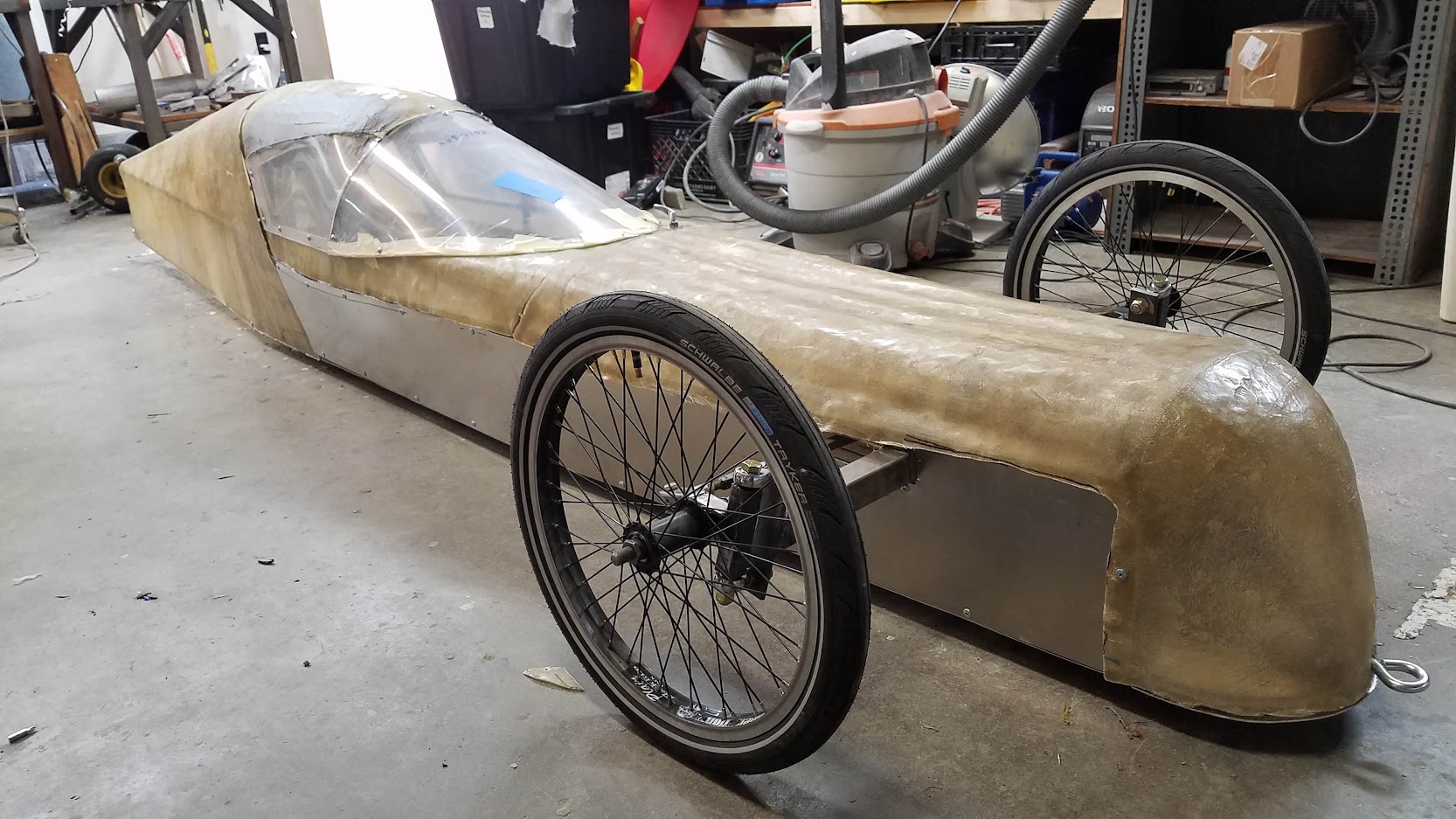 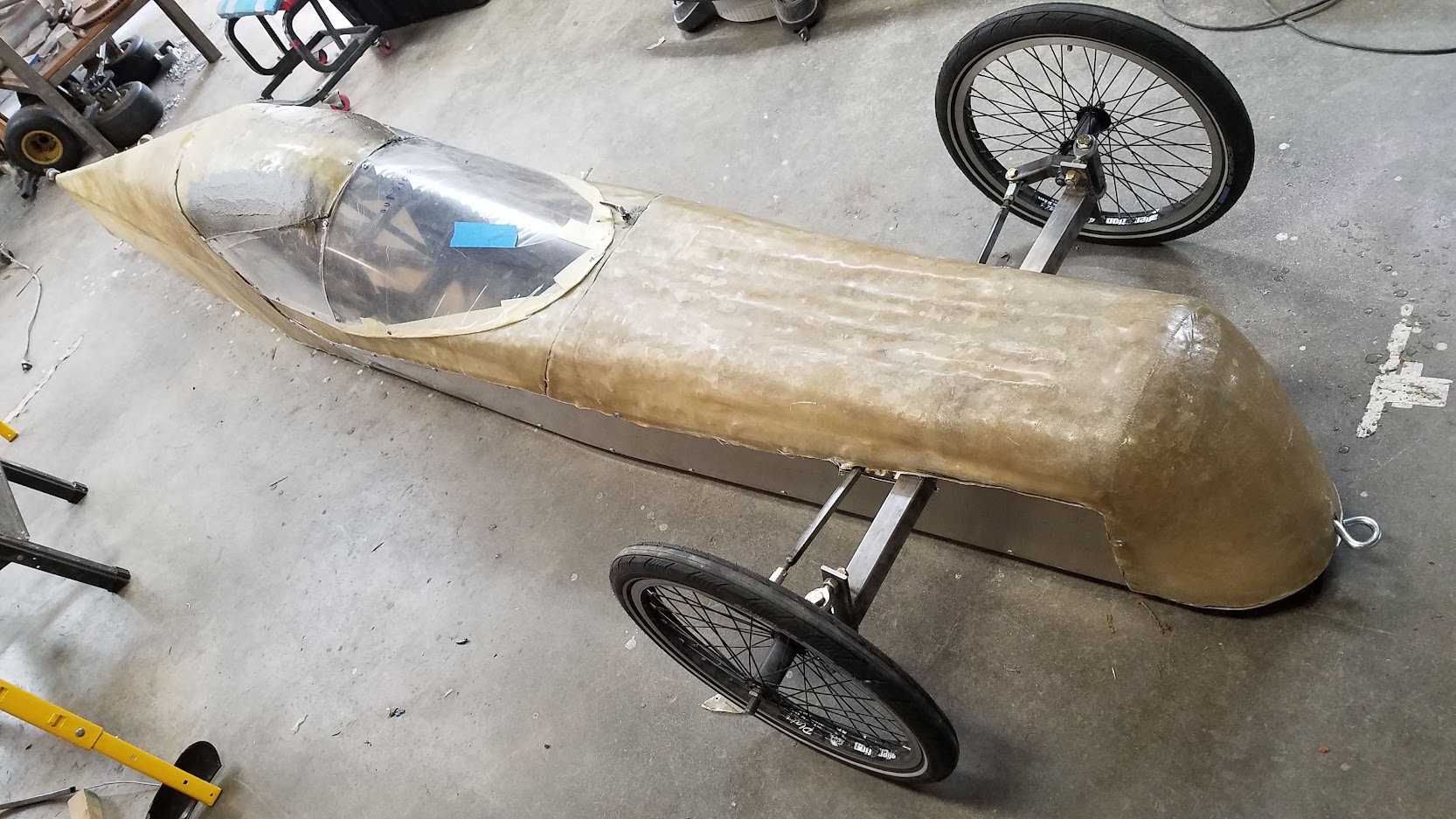 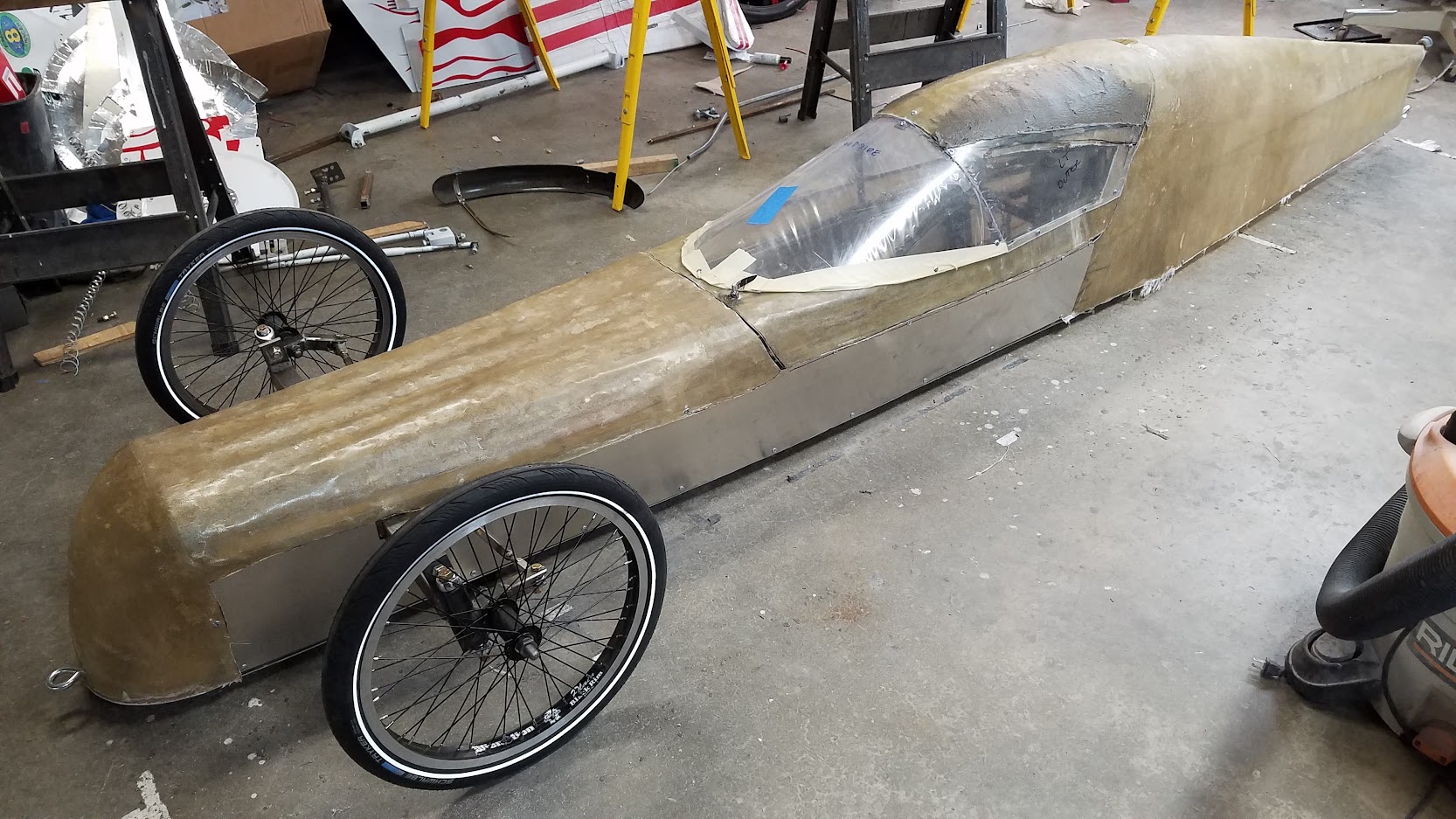 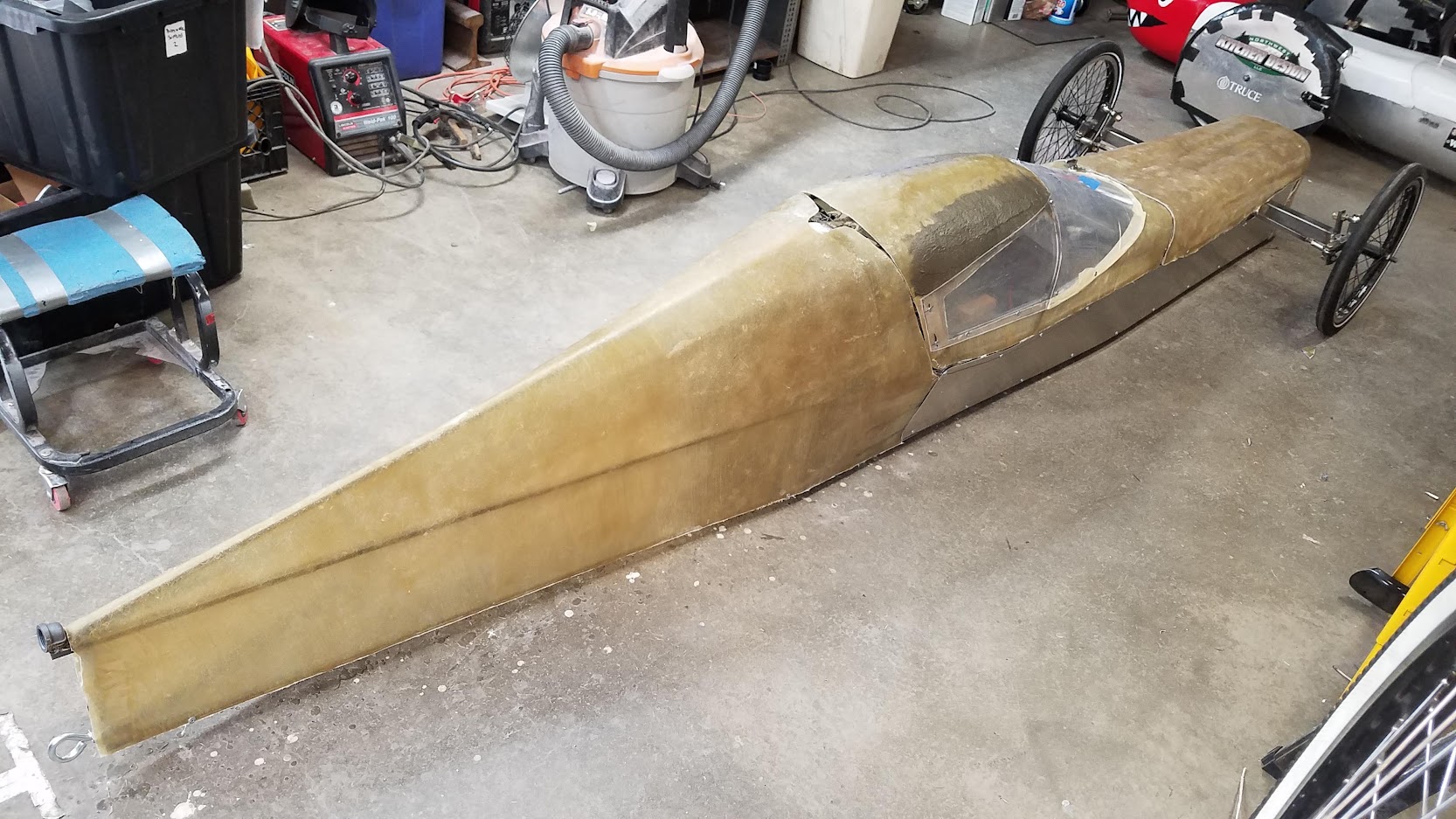 The lower canopy and nose cone will need quite a bit of attention to fair in. After last week's test session, I am strongly considering building front brakes for it as well. So far so good though, just going to be a lot of work.

Admin
Lifetime Supporter
Getting there!
Have you given the Golf-Ball idea any thought?
Not sure how you’d do it, but perhaps a heated metal ball pressed into the fiberglass to deform it in that area?
Adding additional fiberglass in order to mill some away would be a weight burden..
Although I don’t remark as often as I visit this thread - This is one of the more fascinating projects I follow...

Supporter
I have thought about the surface turbulence thing. I am passing on the dimple strategy but intend to investigate placing vortex generators at various locations to reduce drag. Some say they are snake oil, I put some credibility in them and would like to see if they make a difference. We have a good place to test things like this, just a matter of time to make it happen...

Supporter
Getting my itch on, time to do some sanding... 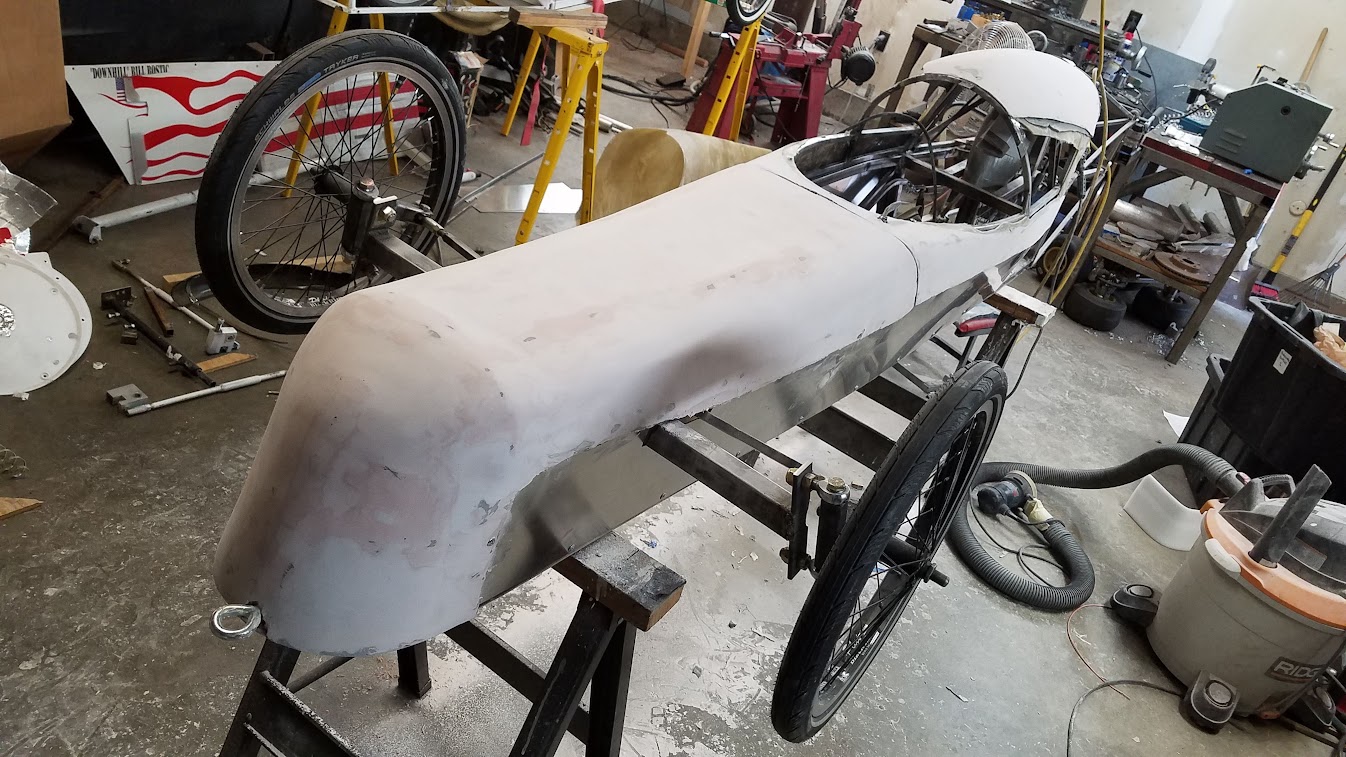 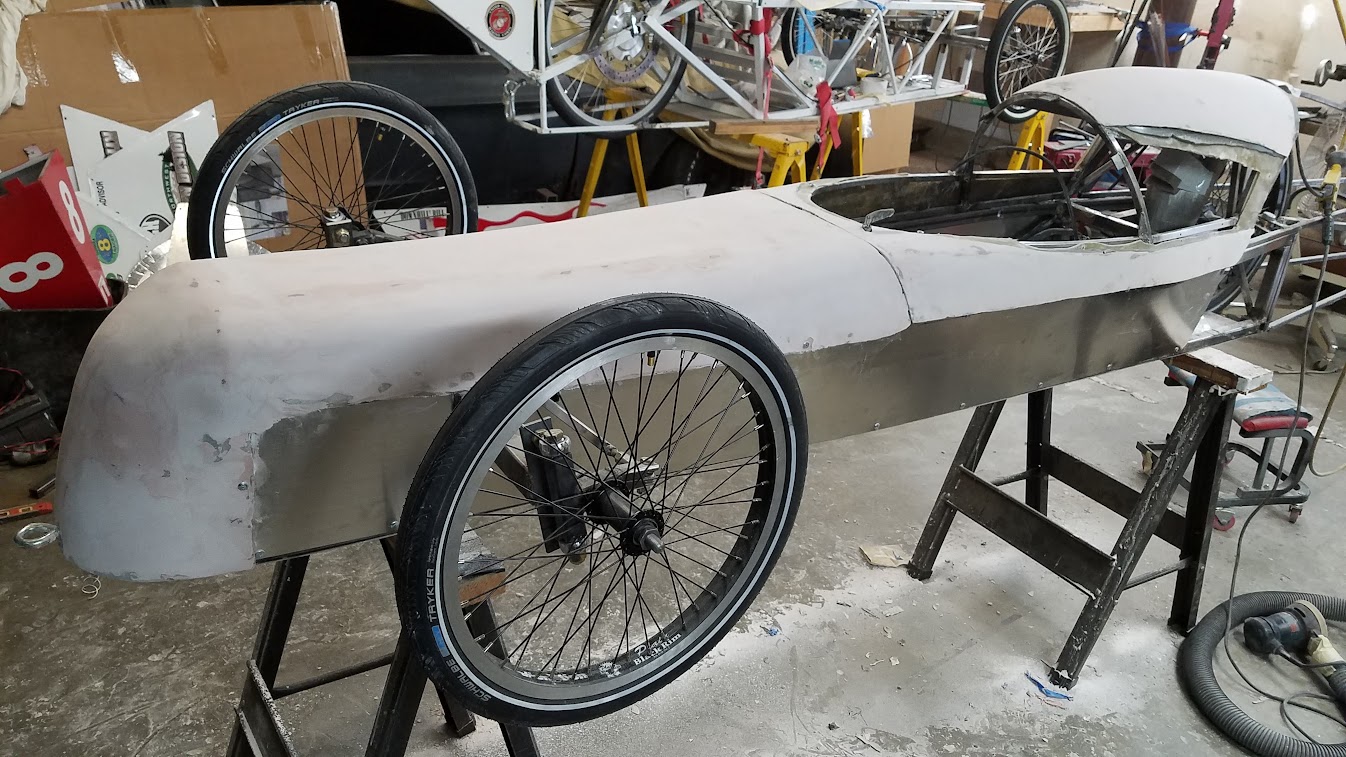 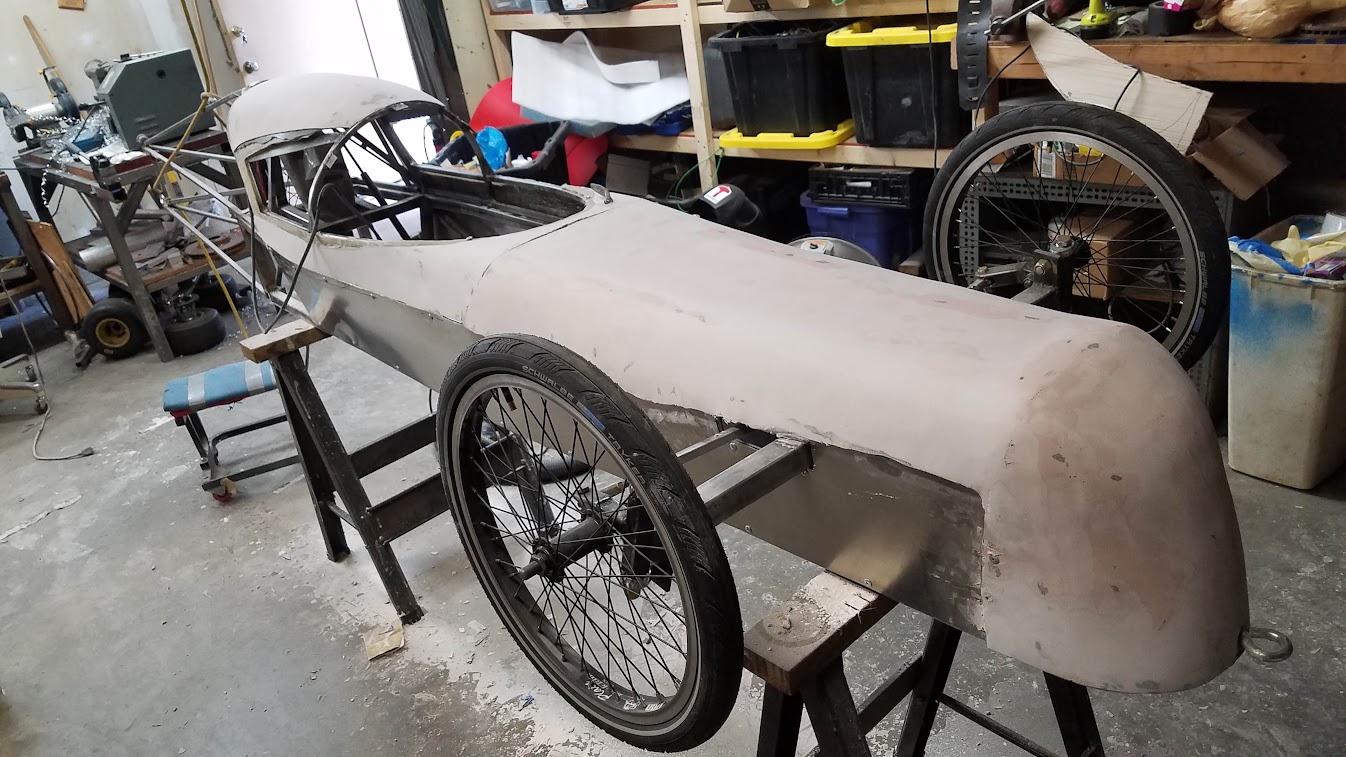 This one is a little lumpier than the Mk V but I am getting to the point of needing to get on with it. Still have the tail to do, no shortage of itching! 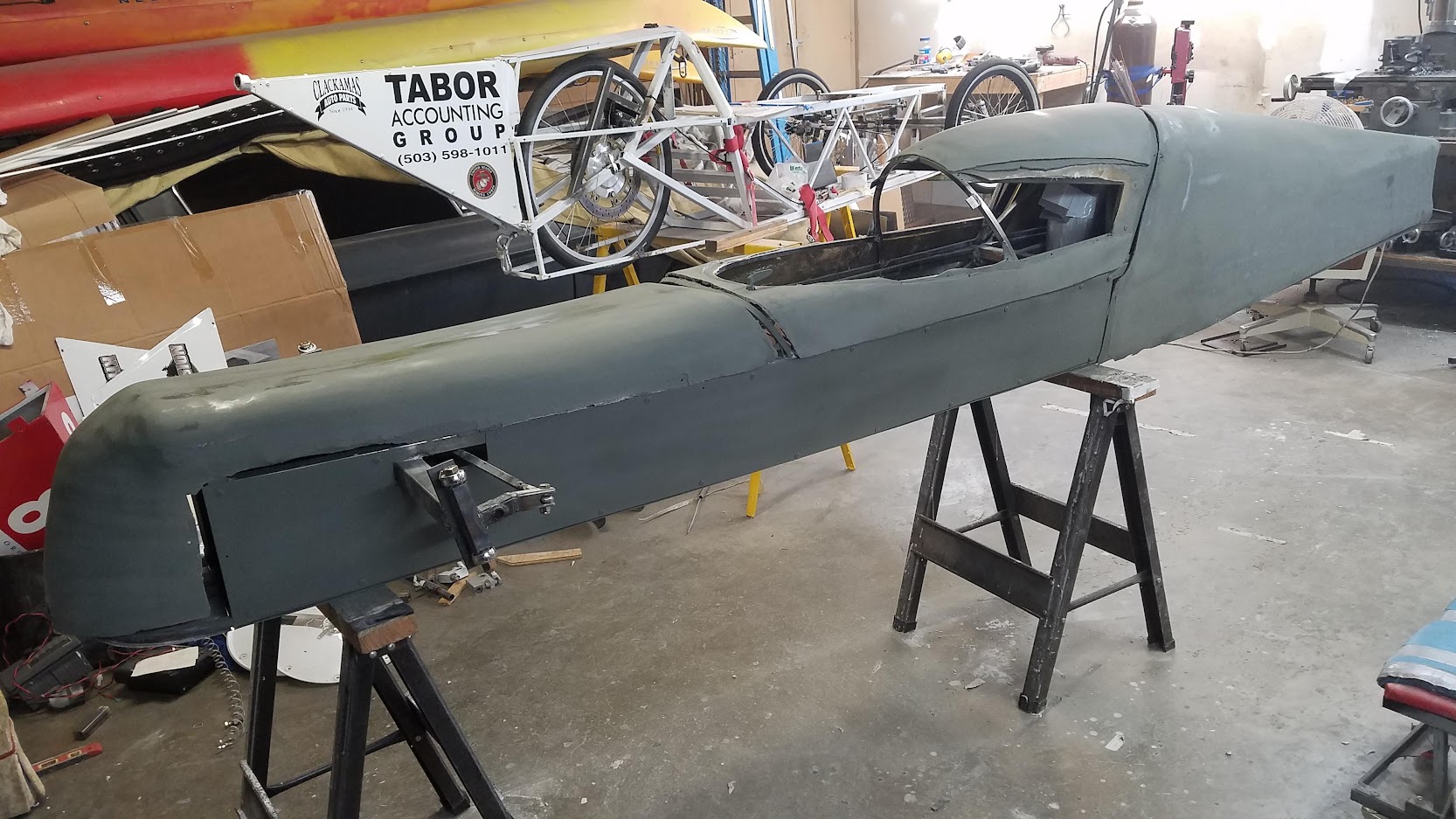