Is the right to bear arms outdated.

What has happened is that fewer people own more guns. Not only that but the average age of gun owner is goining up quickly, and we know who they are.

It seems that when they are not yelling at chairs, they are playing with their guns. Yes, by far the majority of guns are owned by Red State, Conservative, "Old white guys", and they own lot of guns!

When ever we have a another mass gun slaughter, we hear that gun sales have gone up, that scary until we find out that its mostly folks who aleardy have guns, just buying more!

It seems that the "Gun Culture", like Consevatives are slowly dying off! This bodes well for our kids and our future.
Click to expand...

Or perhaps the graph above is faulty based on sample size. I was trying to quickly find the sample size.... What I found QUICKLY was on Wikipedia, so take that with a grain of salt.... But per wiki, there's only been 55,087 respondents from 1994 to 2010. IF TRUE, that is a miniscule sample size.

Now, if someone asks me in a survey (with my name and address disclosed) if I own guns.... My answer is ...nope. And I know that I am not the only gun owner who would respond the same way. 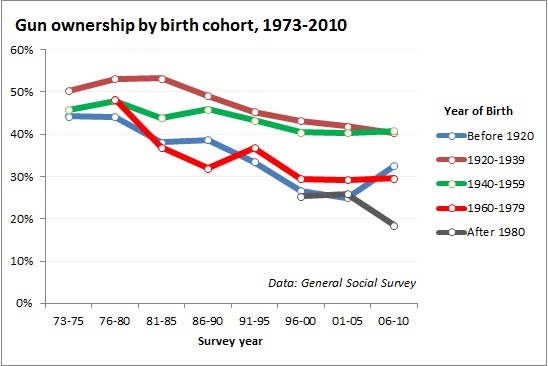 ​
The total number of gun owners is way down, but even better, notice that the number of guns owned by folks born before 1920 is way up (90 year olds are yelling at chairs and stocking up?), where folks born after 1980 is way down.

These most recent mass gun murders appear to have an effect on American Youth. They are not buying guns, thank God!
Last edited: Dec 24, 2012
J

Keith1 said:
It's not necessarily good news. It means guns are being stockpiled. Gun sales went up following the CT massacre. If everyone in the USA had one firearm provided they were qualified to own it, that would be a reasonably good thing. To have thousands of guns owned by a lot less people could equal a private army, and that, is Not a Good Thing.

Also, would you please desist on this Conservative vs Liberal nonsense.

Are you equating gun ownership and use in the USA with one political association?

Do 'liberals' not own guns?

You're right. Jim is being a bit hypocritical indicating that only "old white guys" and "conservative red state" guys own guns. I live in Minnesota, which has more hunters per capita than any state in the US and, therefore, one of the highest gun ownership rates in the country. No one would ever characterize MN as anything but a liberal state.

Interesting that "old white guys" own lots of guns but all of these mass murders are committed by young guys in their 20's. That population has the highest percentage of liberals.......
K

Moderator
I have to say I have no truck whatsoever with Piers Morgan, he is a shabby ex newspaper editor and right up himself. Apparently 31,000 Americans have asked for his deportation via a petition to the White House over his comments on his CNN chat show re: gun control.

Whatever you think, you think but it will be interesting to see if any Americans agree with his statements. Personally, I can't stand the man but was his rant out of order?

Supporter
Well, Piers approaches the topic from a very biased one-sided viewpoint. You can clearly see the emotion in his words. Unfortunately, this has become the state of "news reporting" in the US. There's very little objectivity, just a left or right-wing bent that results in no solutions but lots of ranting.

I don't think his rant is out of order per se, but it has not place on what purports to be a news show. For that, he should be fired for being shitty at his job.

In all of our nightly news programs, I hear little discussion about the discontinuity between the decrease in overall gun violence in the US and the rise of mass-killings (whether it's via gun or the Oklahoma City bombing) of innocent people. Very little education and intelligent discussion in the news. Just a lot of not-so-bright people trying to get better ratings via sensationalism.
C

jonnyb said:
Maybe there should be armed guards on every fire engine too.

Children are on vacation.... :thumbsdown:
T

All of the shooters suffer from some kind of mental illness. All have been documented as not being mentally stable. Most have been diagnosed throughout their lives. Being that it would be politically incorrect to restrain or report these people, the obvious thing to do is overturn the 2nd amendment and take everyones weapon. Brilliant!

Lifetime Supporter
Yes Tom, you have nailed down the problem and the solution in one post, Brilliant!
T

Jim Craik said:
Yes Tom, you have nailed down the problem and the solution in one post, Brilliant!
Click to expand...

Now I know your problem, no common sense.
J

Tom P said:
All of the shooters suffer from some kind of mental illness. All have been documented as not being mentally stable. Most have been diagnosed throughout their lives. Being that it would be politically incorrect to restrain or report these people, the obvious thing to do is overturn the 2nd amendment and take everyones weapon. Brilliant!
Click to expand...

I think that's absolutely correct. In the several 'mass shooting' cases in the UK, each of our 4 perpetrators (I include a school incident where a guy went nuts with a knife but I don't think anyone died): There's Hamilton, 1996 in Dunblane (16 children and one adult dead), armed with 4 legally held guns and a member of a gun club. He had previous issues as a scout leader and he was flagged up as "something wrong somewhere" but no-one did any thing until....

There's Michael Ryan, 1987 Hungerford, 16 adults including mother and wounding of 15 others - guns legally held. He had a morbid fascination with guns, went around in military gear, couldn't hold a job down and was a loner. Post mortem, the best the experts can come up with is psychosis and schizophrenia but no-one is really sure.

The the latest, Bird in Cumbria 2010, 12 people dead and 11 injured, licensed 'sporting gun' holder. No-one knew the exact motives behind that one but he was a bit of a failure with women and work and most people he shot he knew very well (including his brother). Could be that one further bit of bad news tipped him over the edge. The problem with this one is that it was almost impossible to predict this outcome whereas the others had "issues" that were either ignored or fobbed off.

I think Bird was the 'scary' one as many people I know have 'issues' like he did and I wonder if we really know people at all.

In the main, the perpetrators certainly had mental issues which, in light of their gun ownership should have been investigated further.

Even more recently a man killed his girlfriend and 2 others at a party with a legally held shotgun, having narrowly escaped having it removed from him for threatening someone, and the damned Police let him keep it!

In most of these cases mentioned, there was reason to be concerned. After the first two, firearms were severely restricted: centre fire semi-automatic weapons after Hungerford (Ryan used an M1). Following Dunblane, all handguns were banned from private ownership in the United Kingdom, although I believe you can still 'own' one but it mustn't leave the club.

Bird's gun was a .22 'popgun' what you might call a 'squirrel' gun but he still managed to knock off 12 people. In 3 of these incidents, a close family member (2 mothers and 1 brother) were also victims. This seems like a common theme as well.

I do not think however, that you can really compare different nation's experiences, like comparing a non gun country with a gun country but the very common theme of mental disturbance seems to be a recurring problem.

I also believe there are too many guns just laying around in the US. I was at a party in Hunstville AL a few years back, and I was looking for a bottle opener. I opened every drawer and every cupboard in the the kitchen during this quest, and there was a gun in every one - probably about 20, and that was just the kitchen. And yes, they were all loaded.
O

Do governments fear an unarmed population?

Government is the name we give to things we have decided to do together. You know things like roads, the Military, Mail, Police, Fire..............

You are afraid of things we do together?

Are you afraid of Roads, the Fire Det, Police, Military?
O

Jim, you have done a good job at pointing out those departments have nothing to do with my statement.

Do governments fear an unarmed population?
Click to expand...

So John, let me see if I understand, you do not fear the Government, you fear me? Really?

If thats the case then you truly do not need guns, as I am unarmed!
O

Whats that old saying? The pen is mightier than the sword?
Last edited: Dec 27, 2012

Whats that old saying? The pen is mightier than the sword?
Click to expand...

John, do I really have to explain to you how a Democracy works? You think I'm doing this?

John, the People of the United States elect the Govenment. This is how the people feel about guns: