Supporter
No luck with existing brackets via web search.
Talked to Kwik. Might have something that works with Sanden 5 compressor but not mini compressor that comes with Vintage Air kit.
I just received a set of Dave's Unlimited brackets which do not fit.

Option 1: Use R4 or 508 series compressor and brackets.
Option 2: Help me.
Option 3: Make template and fabricate the plates out of aluminum or steel, make the spacers, buy the bolts.

Anyone ever mount a Sanden SB7B10 on an LSX LS7 head with a dry sumped block?

Worst case scenario is a try and fail. But I only live an hour away from H-craft.:laugh:

Lifetime Supporter
Steven, I'm pretty much in the same boat except that situation is more complicated because I have a custom built LS7 with a supercharger. So I have a problem with both the alternator and the compressor. This is what I'm thinking of doing: I think I found a stock bracket for the alternator, but I haven't tried it yet

I know that stage 7 got around the problem by mounting a bracket to the chassis. That apparently works because he has solid engine mounts, but I'm going to go with a bracket (likely custom) mounted to the head.

It also took me a while to figure out how to plumb the oil system. They don't provide instructions because most people who buy their stuff know what they're doing or are paying someone who does;-) I exchanged a few emails with Daily and they confirmed that diagram below is correct. I haven't actually plumbed it yet... so let me know if I got anything wrong!

I don't know the pulley combination you're using, but I've found that a single line back to the valve cover breather has been sufficient (LS2 with home-made tank, and Dailey set-up)

Supporter
I think making a bracket to bolt to the head will be easiest route. Might be able to use Daves backwards and create 1/4 plate that bolts to 3 or 4 of the head locations. Then weld to Daves. Starting with ruler, paper, cardboard.

Supporter
Here is a high mount passenger head application for the SD7 compressor.

Lifetime Supporter
Ken, that's an interesting find. However, that's were my throttle body is... it's not apparent in the picture because the intake hadn't been fabricated at that point. I need to mount mine on the other side.

May order and test to see if it actually fits our motors. Many variations of LS7/LSX and different front dress x3. But I hope it works.
P

I think the first person to use a Dailey dry sump and an AC compressor was probably Stage7. Maybe you could query him and find out what he did. I know he worked the problem for quite a while and was proud of the result.

His SLC recently sold at BJ for close to a record amount for an SLC.

Lifetime Supporter
Pnut, as I mentioned above my understanding is that stage7 mounted it to the chassis. That worked because his engine has solid mounts.
F

Don't we all have solid mounts?
F

If you went with a davies craig water pump (electric) and their LS hose kit you would not have to work around the water pump and inlet/outlet.

That may make something like this possible. Please excuse my quick and dirty mod of the previous drawing...

I looked into the Davies Craig pumps. It makes a lot of sense to be able to run the water pump flat out when at idle in a mid-engine street car. That said, they don't seem to have a lot of high-HP applications. If anyone knows of it running high-HP applications let me know.

Your suggested belt route does wrap the alternator more, but I think it takes too much off of the supercharger. Both of ours take a bit off of the crank and I'm not sure if that's an issue or not...
F

I have the Davies large pump and one of the smaller ones. They are going in with my new motor. I spoke with a couple of the guys at DC about their personal cars. I'm convinced it will be good (and makes my life easier). The small pump will pump all the time (regardless of temp), will feed Oil Coolers/Turbo/Waste Gates and will be on a delayed off-relay. Larger pump is using one of their controllers. Time will tell.

Supporter
I am running the top of the line Davies Craig pump (EWP150) with their electronic controller on my SLC. The car has a 355 SBC, Brodix IK200 CNC ported alum heads, XR294HR cam, hyd roller lifters, Pro Magnum steel roller rockers, 10.75 to 1 forged steel Scat rotating assembly, and a 750 DP on a single plane Weiand. I am guessing but I think it makes north of 450HP on 93 octane gas.

A couple of weeks ago I did COTA here in Texas with a air temp in the mid 60sF and for the first time ran the car to 6500RPMs with full peddle pulls in 5th on that long back straight. I have replaced the RCR radiator with a C&R custom one and since I got the plumbing figured out the car ran perfect at the programed water temp, 191F, all weekend. I am going back to COTA in April and we'll see if the air temps are higher for another test.

I am convinced that electric pumps are the way to go in these mid engine prototypes being used in a road race configuration. The ability to keep water flow and thus cooling constant in order to maintain a pre described coolant temp without engine revs (water pump speed) complicating the issue is a very important one and has show me great benefit so far.

I would not build a track car without one given what I know now. As a side note there are other straight forward constant speed electric pumps such as Steward and Meziere as well as running the Davis pump without the controller if that's what you wanted to do. All three have proven themselves and would work well IMHO.
Last edited: Feb 10, 2018

Supporter
Some success with the Holley bracket so far. The 20-134 with the 21-1 spacer kit bolts up, with the exception of needing to install prior to the water pump for 1 bolt. 30mm M10-1.5 cap screw for lower portion of spacer to head. Other options in instructions include grinding off part of water pump. I just grabbed a 5mm shorter cap screw and tightened with pliers instead of allen head. Measured height and width from frame rail as well as for clearance above the Peterson 3 gallon oil tank 08-0010. Should have just over an inch in all planes. Still need to figure out tensioner and blank pulley- Holley sells both. 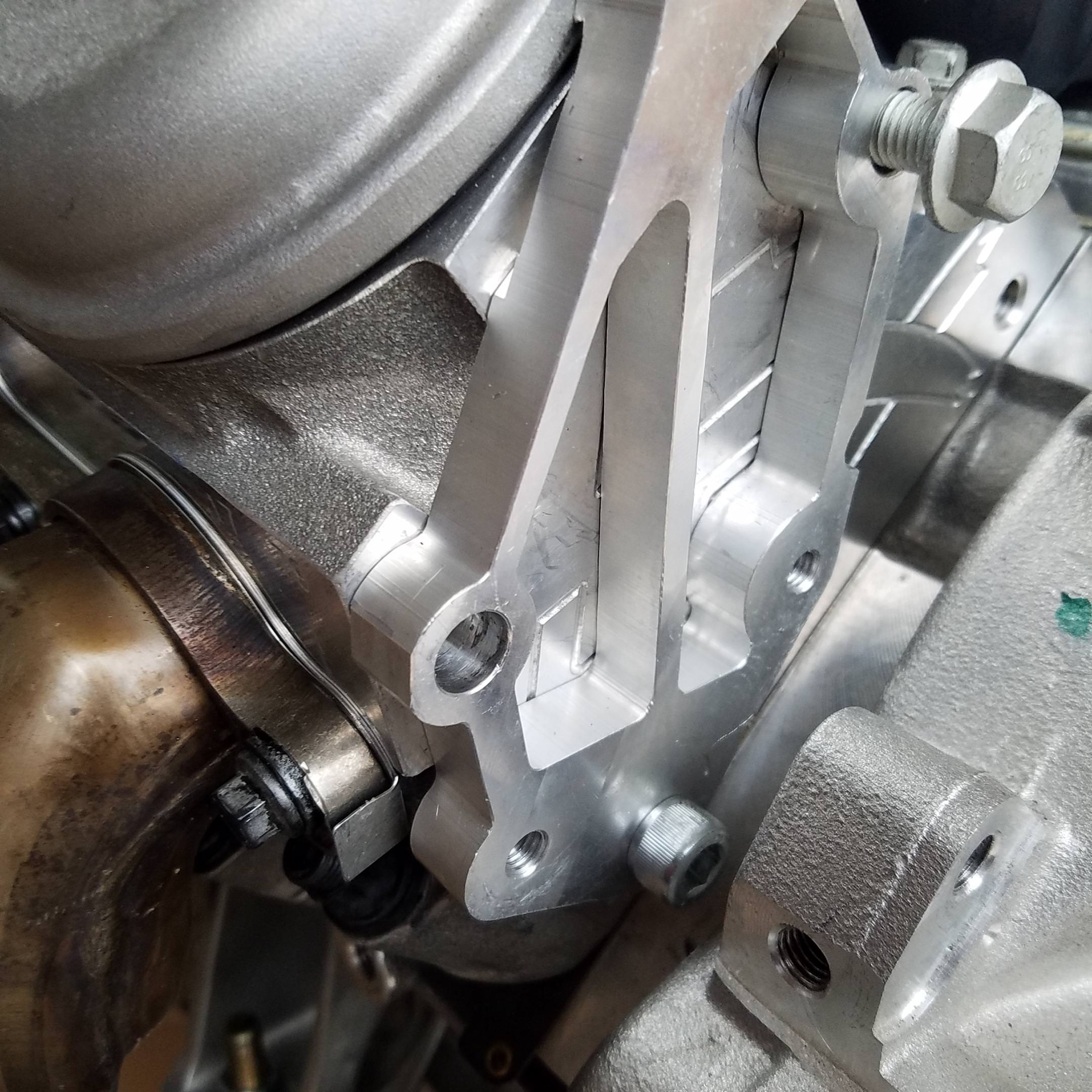 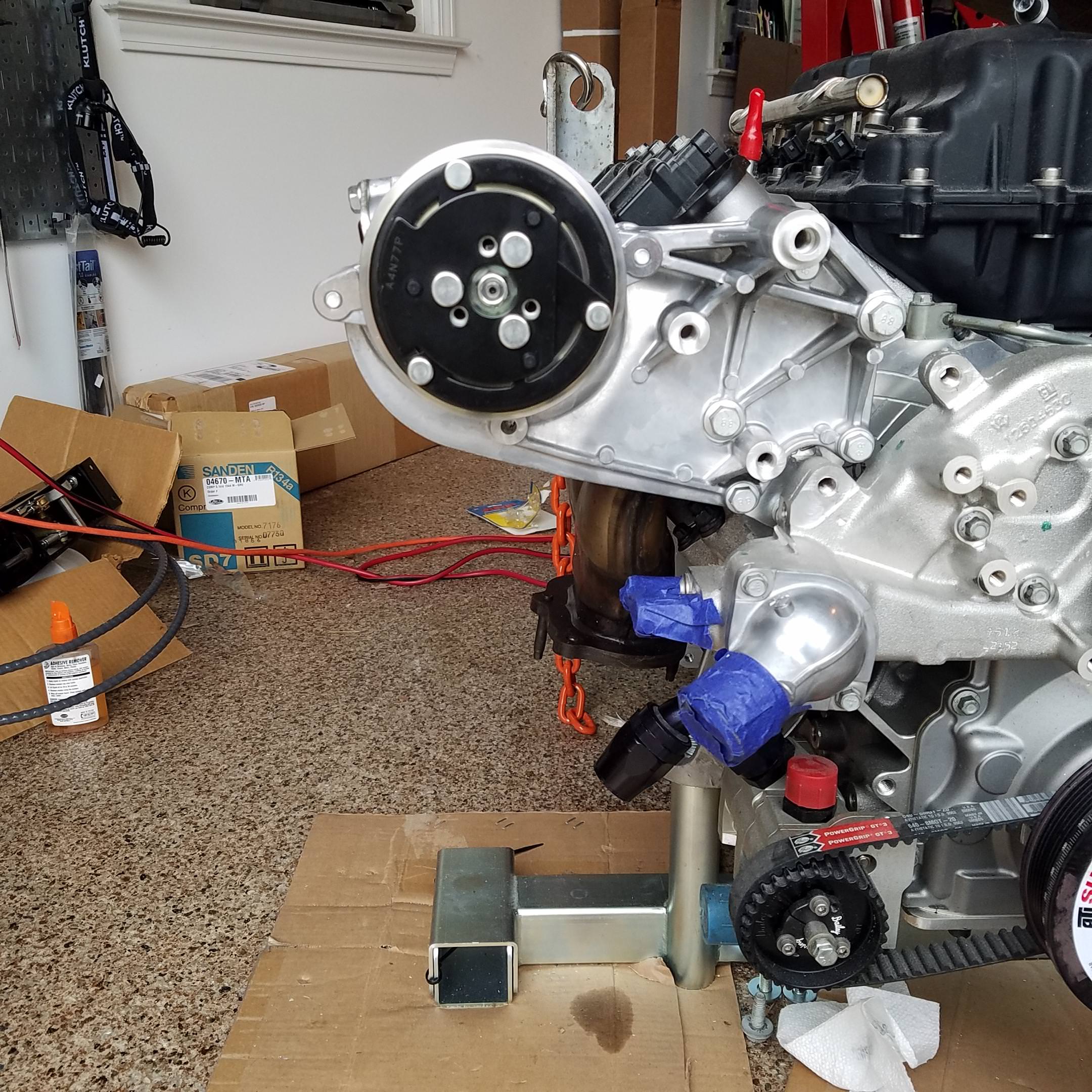 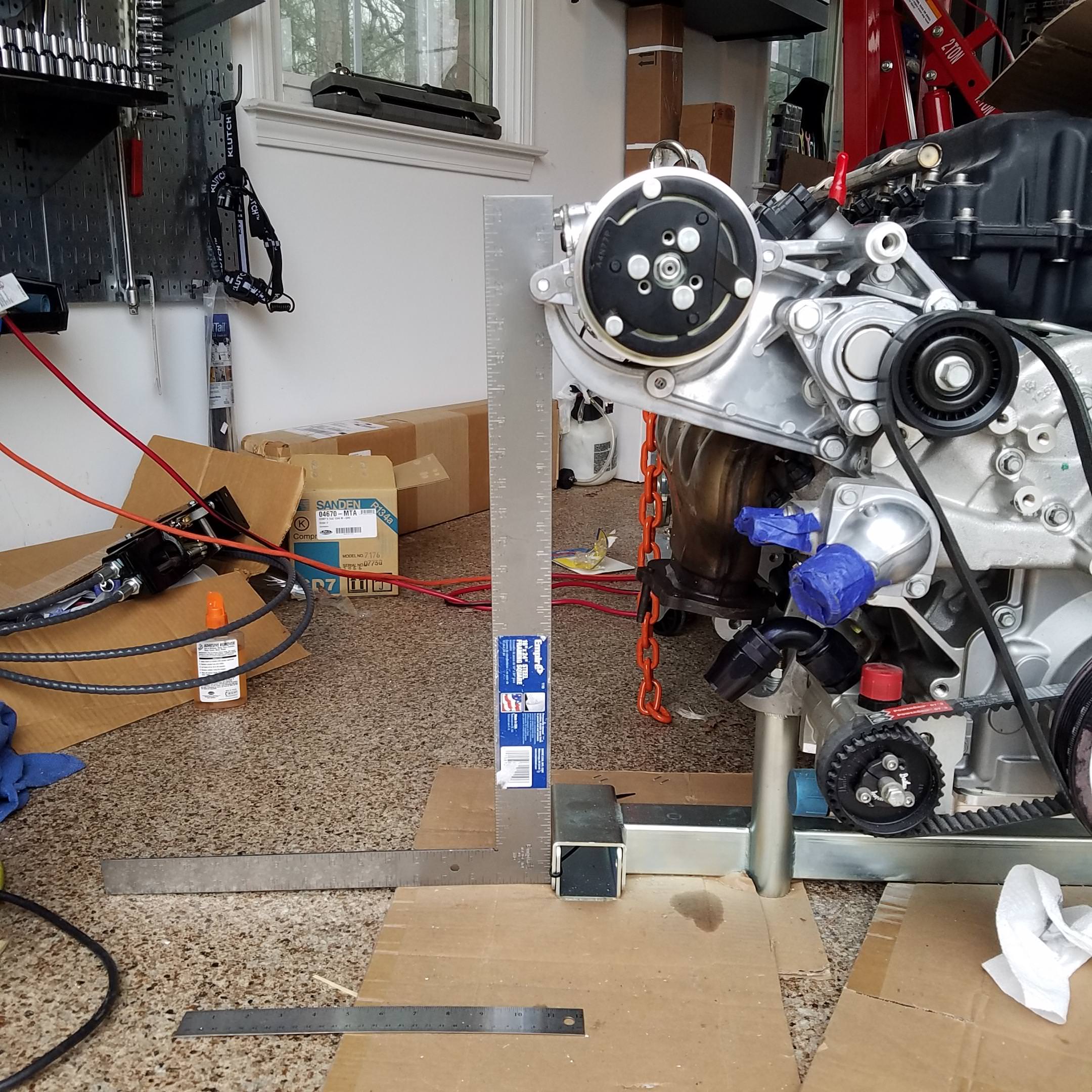 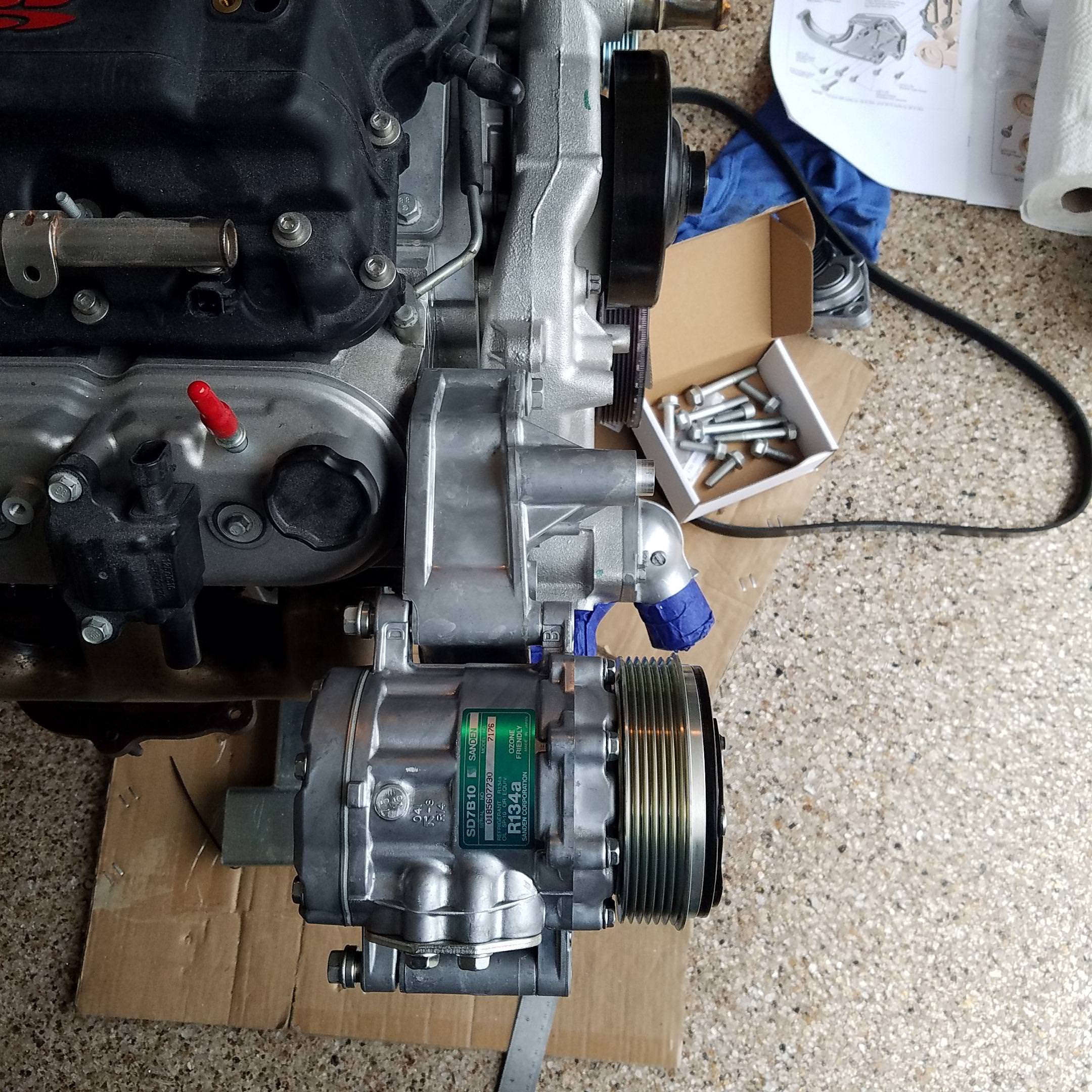 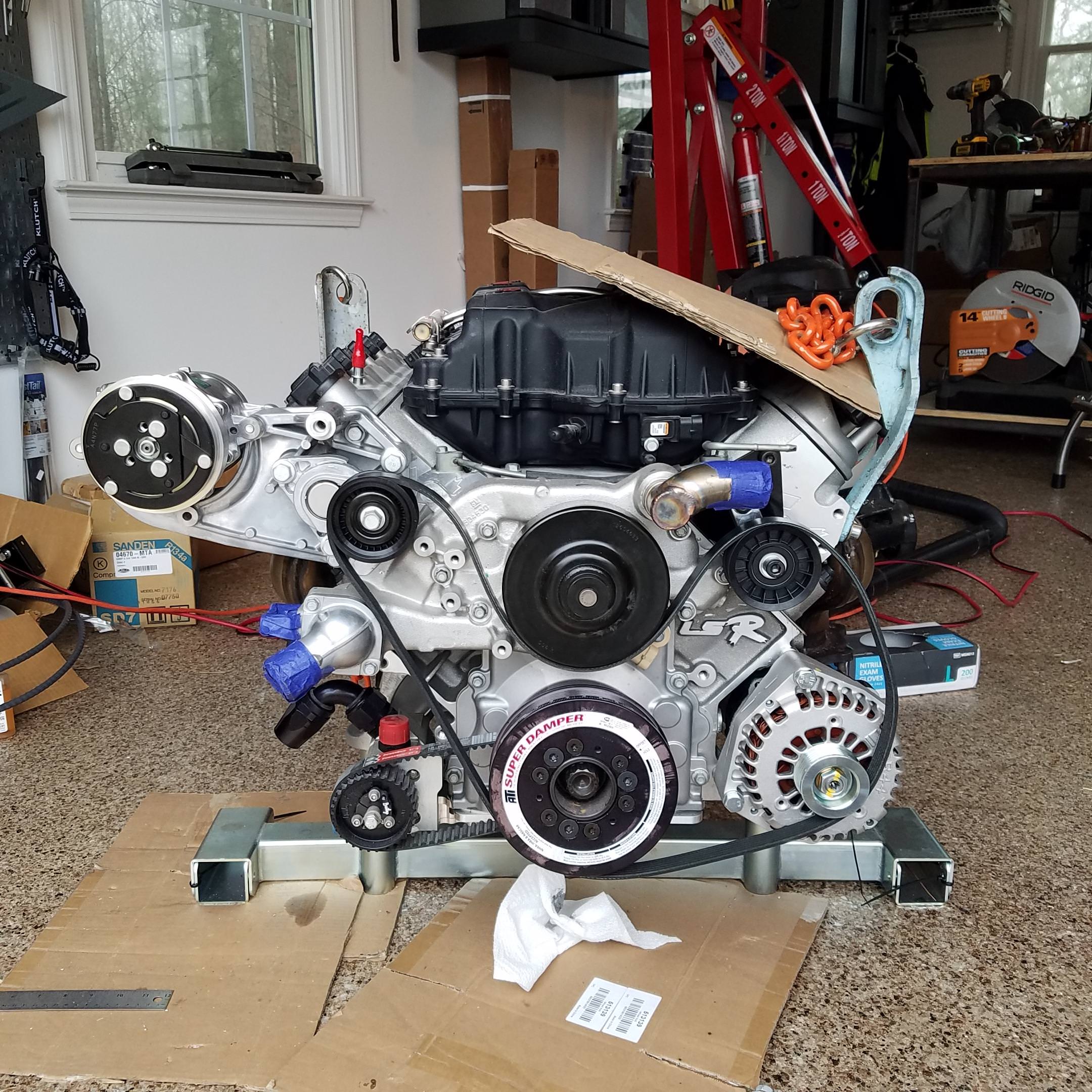 Supporter
And here is all I think I need for the completion of the setup: 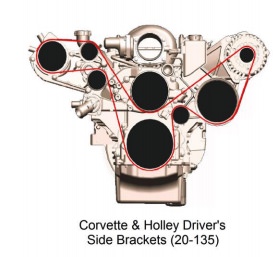 An idler pulley, a smooth pulley, and then to measure the belt.

I think I have to switch the smooth and grooved pulley. Will know when they arrive.
Last edited: Feb 10, 2018

Hi Scott,
I have the same Dailey dry sump system on my LS3.
Your setup lookes as recommended, with the exeption of the lines from the valve covers to breather tank. I have a vaccuum regulator on the valve cover iso the lines.
The scavange part of the pump is pulling a lot air so your -AN 6 lines lookes a little small.
Or is it maybe due to emission you are routing the lines as in the drawing?

Joystick said:
Hi Scott,
I have the same Dailey dry sump system on my LS3.
Your setup lookes as recommended, with the exeption of the lines from the valve covers to breather tank. I have a vaccuum regulator on the valve cover iso the lines.
The scavange part of the pump is pulling a lot air so your -AN 6 lines lookes a little small.
Or is it maybe due to emission you are routing the lines as in the drawing?
Click to expand...