I came across some photos from a special Shelby exhibit at the Saratoga Springs Auto Museum that includes a yellow MkIII. The sign accompanying the car identifies it as chassis M3/1101 (the LHD prototype) belonging to Nick Soprano of Motor Classic and Competition Corp., White Plains NY.

However, according to the Shelby World Registry, M3/1101 was converted to RHD MkI competition in 2005 or so. The car is/was apparently for sale through John S. Allen Motorsport.

Can anyone confirm which is the real M3/1101...? Where does the second car come from? 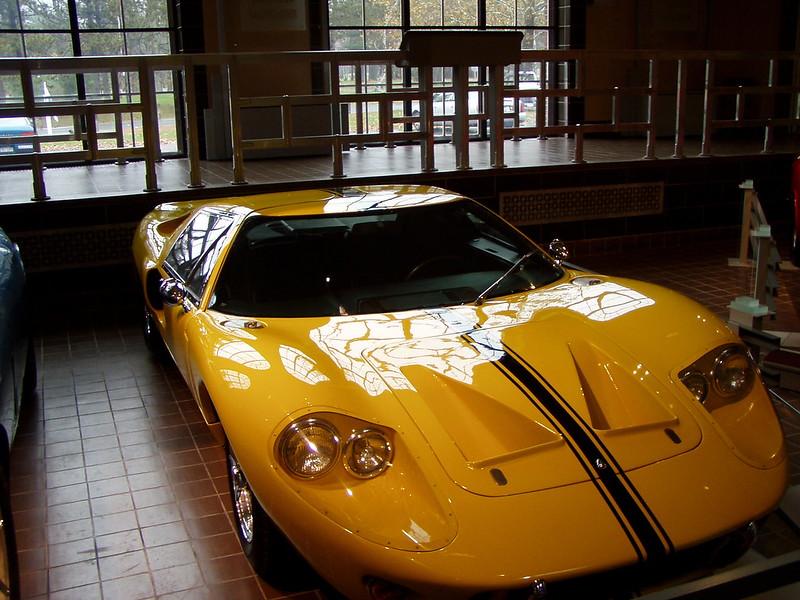 Just had a look on the John Allen site at M3/1101. Very interesting as it states amongst other things -

"Just in case a future owner might one day want to see 1101 back in its MkIII trim, all the MkIII parts removed during the rebuild were retained and are now being built into a new GT40 which is to be sold with this lovely car!"

What does this mean ? Is this the car you saw ?

No further comment, but it does get the little grey cells going !!!

I think the top picture may be an old one, so that you have before & after pictures of the same car.

Mr Spains forthcoming book will no doubt expand on the eventful story of this car !

I think the top picture may be an old one, so that you have before & after pictures of the same car.

Mr Spains forthcoming book will no doubt expand on the eventful story of this car !

I saw the real P/1101 (originally a Mk 3, but converted to RHD FIA Mk 1 spec) at Maxted-Page in the UK several years ago. They mentioned that all the original Mk 3 bits had been retained during the conversion process (which cost a fortune, by the way).

Based solely on what we're seeing here, it would appear that a new car was then built underneath them, and now that car is being purported as being the original?

I'm sure Mister Spain will have a word or two to say on this matter, if we're just patient. :huh:
H

The pale blue car has been at JD Classics in Maldon Essex for I reckon 3 years
In fact the photographs shown were taken on the fabulous JD premises.

Will root out some pics I took when last there.
M

I notice that the yellow car does not have the FORD letters on the nose. May be a clue, may be not.

Thanks for clearing that up.

The blue race car at JD Classics wears a 'J.W Automotive Ltd.' chassis plate that reads ' GT40P 1101'. I would guess this number is used on the historic racing paper work that goes with this car.

There are 'substantial' spare parts also on site.

I went back to the source of those photos to verify the timeframe when they were taken. As it happens, the photos were taken in Nov 2004 but were posted online in Jun 2013. Oops.

Well done for checking that out, thanks.

What happens to the spare parts holding in the future though is a different matter, we may end up with two cars as suggested. Then it gets complicated.....

P1101 was at Goodwood Revival with exactly the same livery, but different license plate:
7 BPM.

Yes that's the car.
The registration number (licence plate) has been changed, well spotted !
It is still listed as for sale on JD Classics web site.
It was entered at Goodwood by 'Wycke Hill Racing' (Wycke Hill is JD Cassics location)

I was recently wondering when Mr. Spain would be completing his book. Reading the recent posts after the Goodwood show.....I can see why he's been delayed. Its like putting together a puzzle where all the pieces are cut in the same shape. What a bloody mess!
J

Can anyone explain why JDClassics appear to be referring to this car back in Mk III format as XP130/1 not 1101 ? JD Classics
G

They've put it back to it's original prototype configuration with the Mk.I style pass lamps and indicators as opposed to the combined unit that was used on the "production" Mk.III's.

Lifetime Supporter
Isn't the center tunnel section offset one way or another for RHD vs LHD cars? How would they convert it back and forth while using the original tub?
G

Because the Mk.III chassis wasn't fitted with the tunnel section in the cockpit.

This allowed the fitting of the central gearshift and handbrake lever.

I love the intrigue!

Assuming a LHD to RHD conversion would require a new bulkhead and floorpan, plus RH inner sill for gearshift mechs. This would leve a large amount of old useless tub. I say "useless", but didn't the learned Brian Wingfield once say if you had 30% of the original tub, then you had the original car? If so, we might have be left with either two 1103s.. SHOCK!

Too many questions and not enough answers!

GT40Graham said:
Because the Mk.III chassis wasn't fitted with the tunnel section in the cockpit.