Supporter
Jumped into roll structure creation and rear chassis reinforcement over the weekend, and also started with the canopy construction as well:

Quite happy with how it's shaping up. Played around with some scraps to visualize the roof line of the canopy and I think it'll work out well. The hinges are a little under-spec'd and flimsy, but should (barely) get the job done. And for $11, it was way easier and cheaper (and lighter) than building up my own 4 bar mechanism to control the motion of the lift.

I also picked up some springs this morning to make good on the front suspension. The bungies are cool from a colors and budget perspective but I need some real hardware up there.

any concerns about the bolts used as your axle as they have a lot of bending load for being in single shear ?

the rear would be easy to make into a two sided swingarm. Tougher on the front..maybe just something to keep an eye on during testing.

You may have already tried all these parts on your other racers with success.

Do you have enough lateral grip to flex the wheel in the rear ?

Supporter
The grip is actually a reasonably limiting safety factor. I have seen almost 1g (.98g I think it was) on a phone app during the event one year, but after seeing data from other runs, I think that was noise. Bike tires with no lean seem to be only in the .8g-ish territory. These bolts I am not worried about in the least. They are 17mm Harley axles. All of our prior builds have been using a standard BMX wheel with the axle offset to the side and as you noted, run in single shear. I believe they were 14mm. We beat the crap out of them in testing and never had a fail.

In addition, although they are in single shear, they are in a "better" version of it. I put a hole though the tube to which they are welded and they are actually cantilevered out from the tube, if that makes sense... They are held by both walls of the upright tube. You can see this in the pic with Jac Mac's scribbles- the bolt head is still on bolt in the pic and you can see it on the inboard side of the upright (behind his yellow line): 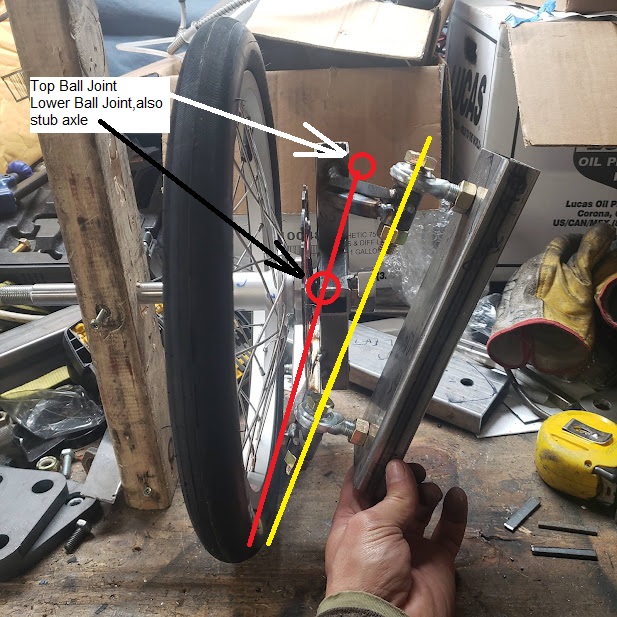 I eventually trimmed the hex head off when I cut the axle to desired length and welded it to the upright.

I am not too worried about the single shear or the rear wheel flex, but these are new wheel sizes and tires, so we will be monitoring and adjust as necessary.

Thanks for the critical eye review though!

Supporter
Things are progressing, but please don't judge me on the state of the workspace.

Bodywork has started. I have had issues visualizing how the various surfaces and features will all mesh. In my mind, I can see all the individual surfaces but how and at what scale they all intersect was difficult for me to imagine. The foam and 3mm ply is helping me visualize all those interactions within the space that they will all have to work together. I have a plan now to make that happen, just need to execute it.

As it currently sits:

The Plan: the rounded shoulder from the nose will continue aft, both above and below the beltline, feathering back into the main chassis shape, and bringing the growing radius from the upper and lower shoulders together to converge at the tail.

Body construction will be the mouldless variety again. Once the foam pieces are all in place, the next steps are to cover it with some fabric and paper mache paste it all together to provide a more rigid or durable surface on which to build, then use joint compound to finalize the body shape. After I am happy with that, it's time for glass and resin to wrap it all with a real body. Once that is cured, I will need to split it to get it off the chassis to remove all the construction buck material, and then reassemble, fair it in with fillers, and paint it. I am hoping within the next two weeks or so, I will have something to work with.

Staff member
Admin
Lifetime Supporter
Looks good!
I’ll admit that I have a great imagination - but I swear I see the beginnings of an LSR car there!

Big-Foot said:
Looks good!
I’ll admit that I have a great imagination - but I swear I see the beginnings of an LSR car there!
View attachment 122997
Click to expand...

Supporter
Ugh. You guys are a horrible influence.

Based on this experience, I have seriously thought about it already (LSR car). My inclination would be the smallest (least expensive?) motored class, but it has definitely struck a chord internally. If I started another project right now before "finishing" the camper, I think my wife would be "disappointed", and that's not something I want to be responsible for....

Once things shake out a bit though and we've done a few trips in the camper, it might be time to scratch that itch. Problem is, I have also done a string of 24h slot car races, which also makes me itch to put a car together for such an event.

If only I was independently wealthy with no time constraints and unlimited resources.

ckouba said:
Ugh. You guys are a horrible influence.

Based on this experience, I have seriously thought about it already (LSR car). My inclination would be the smallest (least expensive?) motored class, but it has definitely struck a chord internally. If I started another project right now before "finishing" the camper, I think my wife would be "disappointed", and that's not something I want to be responsible for....

Once things shake out a bit though and we've done a few trips in the camper, it might be time to scratch that itch. Problem is, I have also done a string of 24h slot car races, which also makes me itch to put a car together for such an event.

If only I was independently wealthy with no time constraints and unlimited resources.
Click to expand...

Go to Speed Week this August and you will forget about gravity or slot car racing! Guaranteed!

manta22 said:
Go to Speed Week this August and you will forget about gravity or slot car racing! Guaranteed!
Click to expand...

Ha!!! Forget about gravity racing.... You're funny!! There are many things I have forgotten over the years, but barring some sort of medical condition or traumatic head injury, I highly doubt I will ever forget the circus which is the PASD.

The 24h events have been slot cars, but the fire they have lit is to prep a full size one I can sit in and drive! The 1/24 scale events are significantly more affordable though.

Supporter
Chris. Take a drive south this winter, usually in the first half of December, and watch the 25hrs of Thunderhill put on by NASA in Willows California. I've gone to watch a few times but my feet always wear out before dark. It's either free to watch or pretty cheap as a spectator. Willows is a nice little town that supports racing, right off Hwy 5, and plenty of motels and restaurants. If you go' have breakfast or (lunch or dinner) at the little airport cafe on the road going out to the track across from Walmart. The track was built by the northern California SCCA so it's pretty first-class. 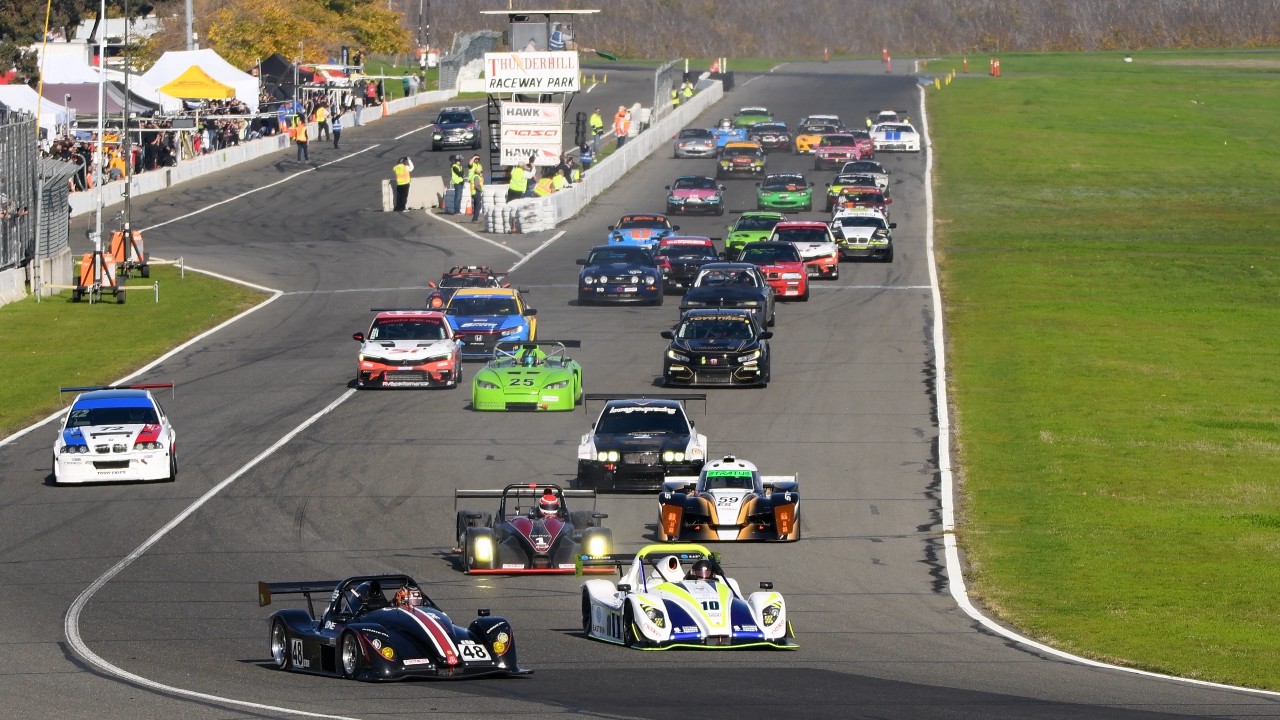 After a “gap year” in 2020 due to the pandemic, the 2021 25 Hours of Thunderhill picked up where it left off, attracting the finest amateur and pro-am endurance racing teams from across the country and from across the globe. In the opening minutes of the race, it became evident there was some... 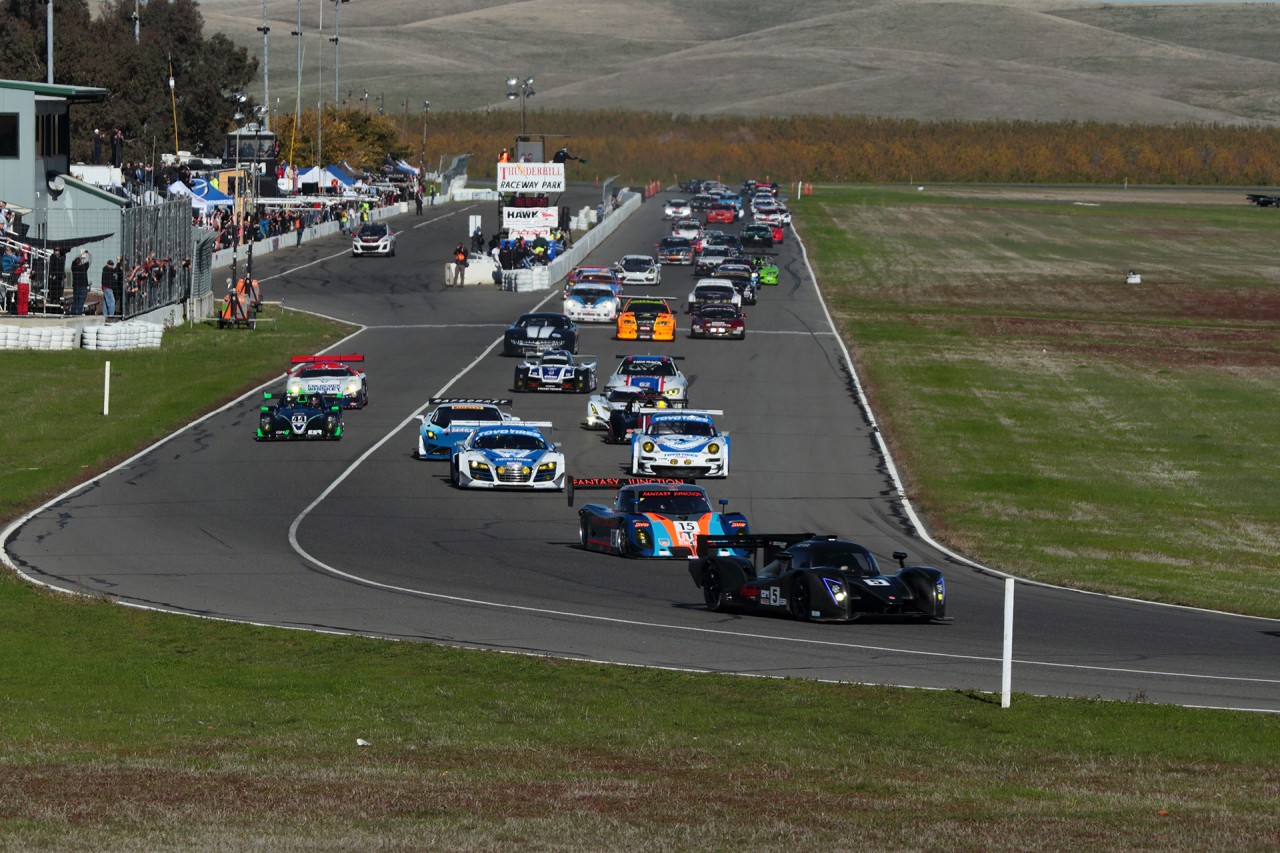 Supporter
Yowza Howard, that's big league. I was thinking more along the lines of Chumpcar to start with and see where that takes me.

Beyond that, making progress on bodywork today. Ended up pulling the foam and doing a wire frame nose, taping over it, then doing the bedsheet paper mache trick. The side pods were made by using stations and running masking tape between them to establish the surface. They too have been paper mache'd with a bedsheet. I still need to do the lower nose section and I have the rear wheel enclosure to figure out.

After this sub-structure all solidifies, I will add in the joint compound to fair in all the surfaces and then glass over that. Still a ways off, but getting closer inch by inch.

The nose under construction:

Working out the stations:

And fast forward, both side pods stationed, taped, sheeted, and glazed:

Really looking forward to getting this task completed.

Supporter
Progress is being made. Put glass on the lower nose section and side pods:

Then flipped it back over (after removing the lower nose section so I didn't crush it) and started fairing in the upper body work, beginning at the nose: 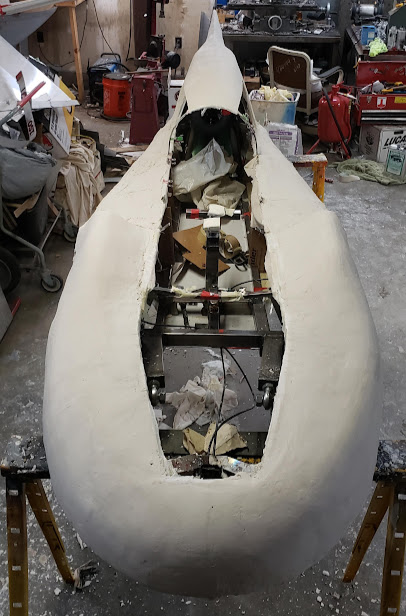 Still a bit of work to do before getting glass on the upper portion, but the shape is coming along nicely.

Big-Foot said:
Nice work!
Which resins are you using?
Click to expand...

Hah! I see that. It'd be great to have them sponsor not just me but pitch in for the event too.

I would have thought you were using epoxy like West Systems…. Pricey, but no VOCs / Smell…

Big-Foot said:
I would have thought you were using epoxy like West Systems…. Pricey, but no VOCs / Smell…
Click to expand...

Budget constraints. Poly and a respirator leaves me more $'s to play with.

Supporter
It's finally all in glass. Didn't work out as well as previously, but the job is done. Now it's a matter of getting it appropriately mounted and the weave surface fared smooth:

Supporter
Ugh, but there's light at the end of the tunnel..... First test day is on track for tomorrow. Just going for basics, seeing how it rolls and such. Have to still figure out how to put a fairing on the swing axle and get the rear a little more streamlined. Need to solidify some other bodywork components as well, wheel pants, fenderwells, etc...

But it's a looker and a roller: