GT90 from ground up

Hi Joet
Thanks for that, leaks are a definite possibility on a concept.
I believe those are rear brake ducts.
Any pics are appreciated.
Would gladly accept the rumored price but I am shooting at somewhere around $35K AUD, hopefully under.
Denis has been off air for a while with personal issues so no answer on the putty release. 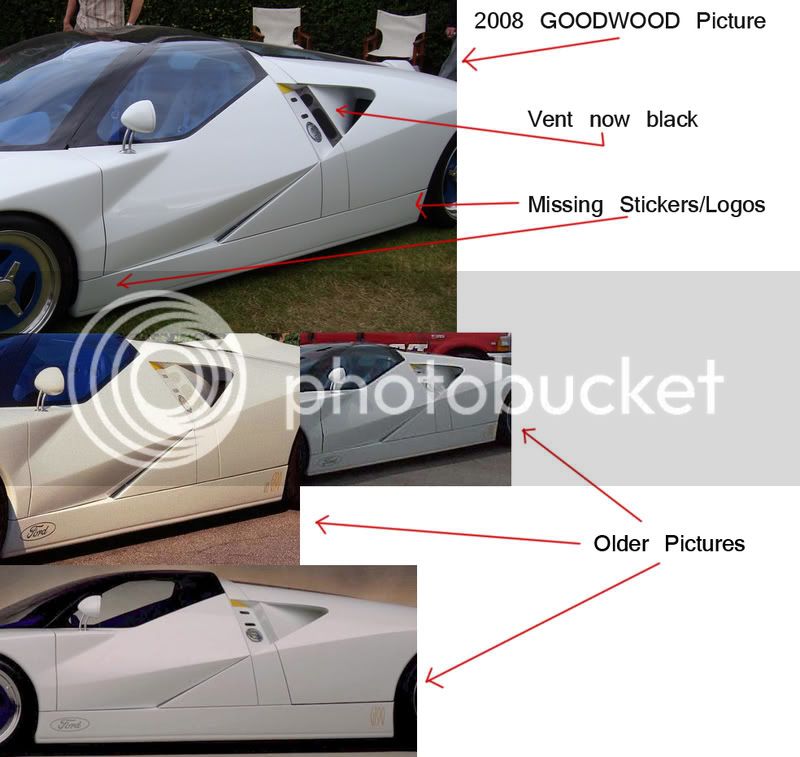 I am sorry I have not been tending to GT90 world and keeping up with Des's progress on the replica page.

I pointed out that these decals were missing a long time ago in my GT90 newsletter type thing, but I am glad you pointed out the black grilling...what the hell happened there.

Whoever would do such a thing to a one off car is sickening to me, how can you start playing around with that sort of rarity.

One thing is for sure, the white grilling looks better.

I will have my Goodwood pictures up later on this night, I am just finding a new photo gallery software then I'm flying. One of the pics I will warn, shows corrosion underneath one of the wing mirrors, and I find it quite distressing the look at.

Why is the car not being cared for properly, people like me and Des would genuinely love to own this car and the guy who owns it right now leaves it in a warehouse gathering dust. What the hell.

EDIT: Throught this together

I will be making a much cleaner looking gallery with everything when I have more time. Here is the corrosion

One possible reason for the missing stickers is that over time vinyl starts to chip and peel, so instead of having old looking peeling stickers he probably just took them off, I would have still reapplied the exact type of stickers but unfortunately I dont own the beast. :shifty:
F

I was thinking these same reasons. I don't see how the chipping could come into effect, apart from the magazine road tests, I am assuming the GT90 has barely been driven.

I want to get to the bottom of that and also the fact the grill has changed.
J

Vinyl stickers shrink, dry out, crack and chip over a period of time, in this case the car is 14 years old. The corrision under the mirror almost looks like old silicone, all body panels on the real GT90 are made from carbon fiber and the bracketing is more than likely made of aluminum, so I doubt that it is anytype of rust under there, still dosen't explain why there would be silicone under there if that is what it is. Nice gallery, look at the first picture in the row fifth from the bottom, you can see the red from the rear tail light refracting on the rear tire, wonder if the rear lights are encased or when the brakes are applied can you see light from the wheel well? Oh well, atleast the concept car can even drive with its own power.
Last edited: Feb 1, 2009
J

Joe, in both of those pictures, the GT90's light were on. I know for all the press shots the halogen headlamps were on, so I assume the taillights also. This could also be down to lighting.
R

Des, If you get the chance have a look at a front fender side indicator lens on the latest falcon's. . .a nice triagular shape, passed one the other day and thought of you . . .might be of use to your project somewhere??

I seem to recall pictures from one of the auto shows showed the GT90 with no back radiator grilles either. I will see if I can find it.
J

From a couple of the images in the gallery that you uploaded you can see exactly what the rear grill mesh looks like, seems to be a series of small rows of triangles to fit the theme of the car. I'm glad that so many high resolution pictures were taken at this last Goodwood, small details that were unknown are now uncovered. I do wish that there were more new high resolution interior shots aswell, cool to see the car parked with the shifter in gear, first pic that i've seen with a gear engaged.
F

In the clip I used to have on YouTube, Jeremy Clarkson can be seen making a gear change and the gearstick looks very wobbly. I may be mistaken but doesn't the official press release show the GT90 in gear. Can't quite remember.

Speaking of the GT90 Press Release, I took about an hour or two last night to scan it in in 600dpi res for you guys.

There is a lot more in the press release, but I could not bear to fold the corners of stapled pages to get the rest in, so I just scanned the first page of this stuff.

This is a really really rare item. I have found this twice, the first time I got outbid, and like 9 months later I found this one. I bought it about 3-4 years ago, and since then not one has turned up on eBay.

EDIT: Just realised the gallery is mucked up. Enjoy the thumbnails for the time being and I'll take a look and re-upload.

DOUBLE EDIT: It's actually really strange for me that the GT90 and Chiron were both displayed almost together really. Apart from the GT90, I am a really big fan of the Chiron and was putting together some ideas for a Chiron World, much like GT90 world. I understand the car has not won many fans though but just like the GT90, I like the quirky shape.
Last edited: Feb 2, 2009
J

Please let me know if my uploaded photos are annoying or bothersome in anyway, I just enjoy analyzing photos like these and like to share with everyone.

just read from start to finish!:thumbsup:
(note to self...should have gone to college)!
F

Joe, neck length could be trick of the angle, but the hose is really confusing.

These are all things I would love to have a chat with John over, but I can't contact the guy. No leads anywhere.
R

Russ,
But then the text would be backwards on the carbon fiber engine cover. As far as the Goodwood photo there are a few other photos from other photographers where you can see the same thing. ITS A V6 FORD CONTOUR SWAP!!!
You must log in or register to reply here.
Share:
Facebook Twitter Reddit Pinterest Tumblr WhatsApp Email Link
Top