My first GT40 build. Got the engine (302) in and now working out how and what alternator to use. Space is tight so have ordered a single groove March crank pulley to keep things back from the bulkhead. I am looking at getting the alternator low on the right hand side on a purpose made bracket. A Wosp 300 looks as if it will do the job. I am thinking 95amp but there is a 175amp equivalent. Even with electric power steering pump, electric vacuum pump and all the usual fans etc I can't really see the need for 175amps. What do others use?
J

Too much alternator will only rob horsepower.
What you need can even a 60amp alternator handle with ease so a 95amp will be more then enough.

175amp, well if you have dvd sytems in the backseats and kids & their playstations on it.. big high end sound system.. otherwise don't bother.

EPS requires amps on heavy steering only but your battery will be standing by if in need.
EFI doesn't need heavy amps also.

Supporter
All true JP. But I had bad luck with Optima and went with an AGM.
J

If your car will be street driven, there's another factor beyond the max output amps in selecting an alternator. It's the rpm range where that amperage is generated. Early alternators had to be spun up to higher rpms to reach max output. Modern alternators ramp up the amperage at much lower rpms. The driving scenario that forced the alternator change in my Cobra was stop and go traffic on a hot day after dark. Cooling fan and lights draw the power but engine is either at idle or if moving below 2000 rpms. So even though I had an alternator that tested as having 100 amp output, it wasn't keeping up with the demand because it was producing about 50 amps or so in this situation.

There's been about three generations of alternator technology since first introduced. For a street driven car, you want something that's at least 2nd generation, probably better if 3rd. In other words, an alternator that produces majority of amperage by about 2000 rpms or so. You can determine the max output needed by adding up the draw from major consuming parts (e.g. cooling fan, electric fuel pump, lights, etc.) and adding on a 20% safety margin, but use a modern alternator so it will actually produce those amps during real world driving conditions.
J

JHeinke said:
If your car will be street driven, there's another factor beyond the max output amps in selecting an alternator. It's the rpm range where that amperage is generated. Early alternators had to be spun up to higher rpms to reach max output.
Click to expand...

You'r talking dynamo with seperate rectifiers, from the 70's on they are all 3 fase rectifyers wich will work fine on street aplications. 60amp iss suffiecent enough. All my daily's ( I have 12) are 70's cars with alternators ranging from 45amp to 60amp. My F250 is converted to 70amp cause of it bumper winch.
EFI, twin electric fans, electric powersteering, electric brake pump, all working fine with a 60amp.

This post over on Club Cobra has a nice chart showing the output of various generation Ford alternators at different RPM.

Lifetime Supporter
I'm going old school and will probably use one of these..... 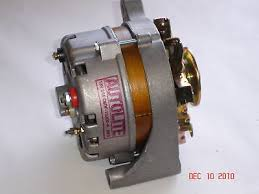 Supporter
Hi all,
nice to read , well explained, and the "why" reason about the delta or Y configuration of the stator, or the needs between low rev engines(diesel) and petrol higher revving engines, to get the light shining again.

Supporter
or this one, we use to train new potential mechanics