Pictures of some of the cars I liked at the show. Although when I told my wife we were going to sell her Fiesta ST to buy the Thunder Bird 2 recreation which is for sale, she strangely didn't share my enthusiasm.

Admin
Lifetime Supporter
Thanks for sharing Nick!
Cheers to the owner of the TVR that encourages photo opportunities!
L

Big-Foot said:
Cheers to the owner of the TVR that encourages photo opportunities!
Click to expand...

'Hope the owner doesn't find himself regretting that policy one day.
I sure did.
This 'ain't' the 1950s anymore.
'Just sayin'...

Good for the TVR owner. I took my black Mirage (Werewolf) to the “Cops & Rodders” car show here in Tucson a week or so ago. The weather was perfect and the turnout was heavy so there were lots of people who were curious as to “what is it?” I let lots of kids sit on the driver’s side door sill so that their parents could take their picture. That was great fun. What the heck, it’s a race car, not a show car- they weren’t going to hurt anything.

Note the two 2016 Z06 Corvettes parked along side. They were about 6” taller than the Mirage. At a traffic light I’d be looking up at a Corvette!

Larry L. said:
'Hope the owner doesn't find himself regretting that policy one day.
I sure did.
This 'ain't' the 1950s anymore.
'Just sayin'...

I took the picture as I thought it was brilliant, time will tell for me hopefully je ne regrette rien and I think it is worth it. Personally I had found it has been adults not children, that have bee the problem, not asked but just draped themselves across my pre war car. Maybe car loving kids in the UK are different to those in the US

There is a lovely chap in our club area who along with other club members, regularly has children young and old queuing up to sit in their car's at shows, it makes their day. One chap came back a year later to tell him how important it had been. He said talking to him about the car, and sitting in it had been the inspiration in turning his life around. It is also a privilege for me to see the joy on kids faces when they are allowed to sit in their dream car, who knows who you may inspire.

We are just the custodians of these cars, many were here before we were born and will be here long after we have gone. If they are used they will not stay pristine for long just look at the originals, I think they call it patina.

Having said that I would have to be there to supervise anyone getting in or out.

Sorry Randy posted before reading what you put.....maybe car loving kids in the US aren't so different after all
L

Race cars, over-the-road street machines and the like showing a bit of "patina" aren't what I was referring to. 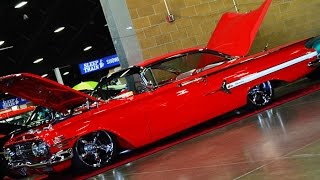