Scrub radius, castor etc, Chris. get rid of the induced drag from front tire contact patch being offset like it is at moment. Put a sheet of newspaper on floor and keep playing with it until it stops screwing up the paper when you push it over newspaper in straight ahead and some lock applied. I would reverse the rod ends on front axle so that effective king pin line intersects tire contact patch or as close as possible to it taking into consideration you need some castor to run straight/self center.

The fronts are cambered about the same as they were on the Mk I car, and they are the same wheels, so I think I'll be alright.


jac mac said:
I would reverse the rod ends on front axle so that effective king pin line intersects tire contact patch or as close as possible to it taking into consideration you need some castor to run straight/self center.
Click to expand...

Well crap. That's a fairly simple solution to what I had perceived as a packaging problem. I used the same design concept as the Mk I and just hard built it (no adjustability) to its final evolution for the Mk V. As you've noted, the way the hardware stacks up, it's difficult to achieve zero scrub without a massively inclined kingpin axis. I did shoot for it though. Or at least "at it".

Having gotten this far with building it, I think I will just see how bad it is. The course doesn't have very tight corners, so steering input angles and scrubbed speed should be minimal. There is the one high speed right hand sweeper, but the inside tire should have a reduced load on it through weight transfer- and hopefully a reduced friction drag. The way the steering is set up, I know my Ackermann will be off as well (design compromise), despite aiming the steering arms at the rear axle center line. I need to see how it all stacks up before making any massive changes.

If I don't like it though, it will be back to the drawing board. Thanks for taking a critical look through it.

Supporter
It's been a while since I updated this but progress on the body is being made. Used some joint compound to get to final shape and now applying fiberglass. With a little luck, I will be able to get the body off, remove the buck underneath, and then reinstall the shell. Time will tell... 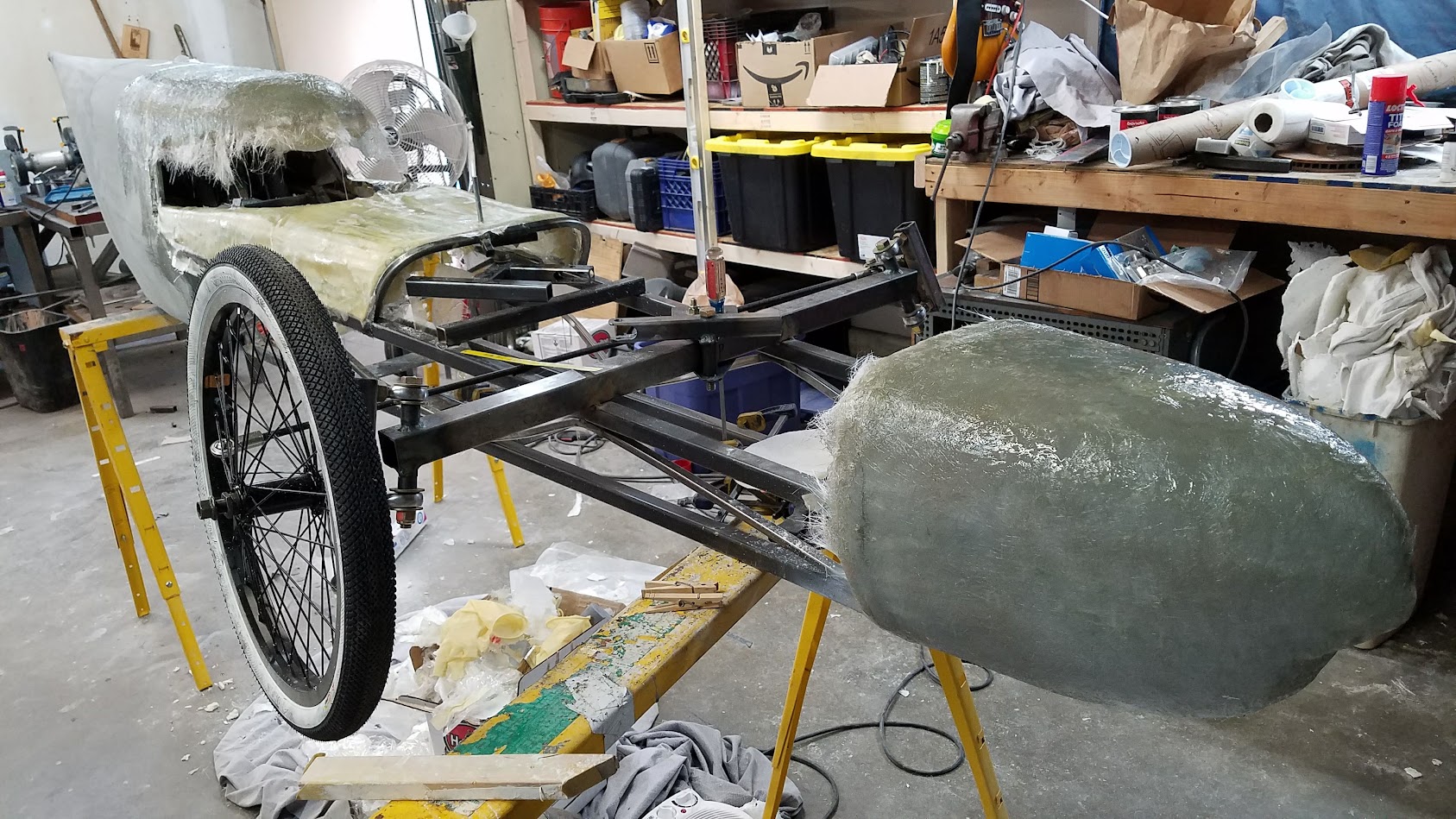 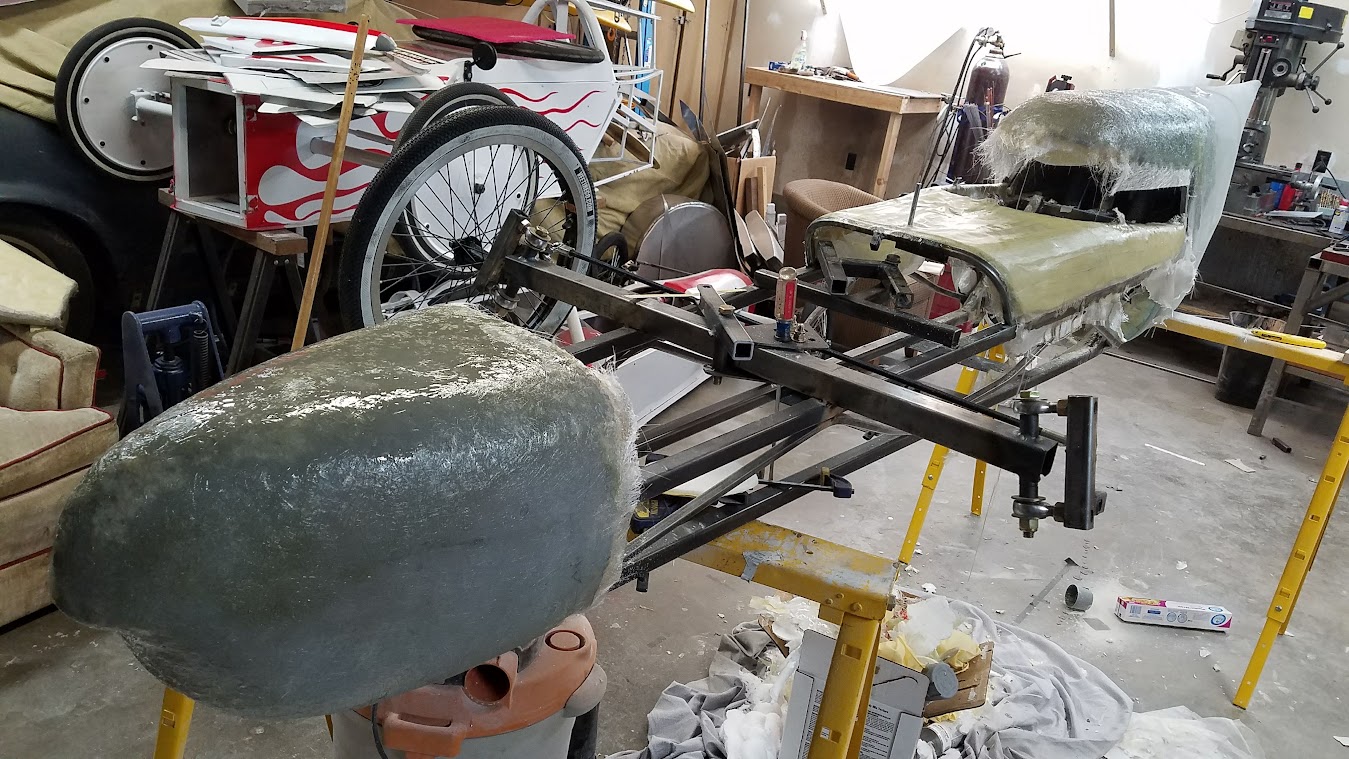 I am quite happy with how the shape is coming together. Hope to get the rest of the tail section done up today.

Staff member
Admin
Lifetime Supporter
Looking into my crystal ball - I see Lotsa itchy-scratchy sanding in your future...
((I do like the shape though!))

Supporter
The scratching has started... 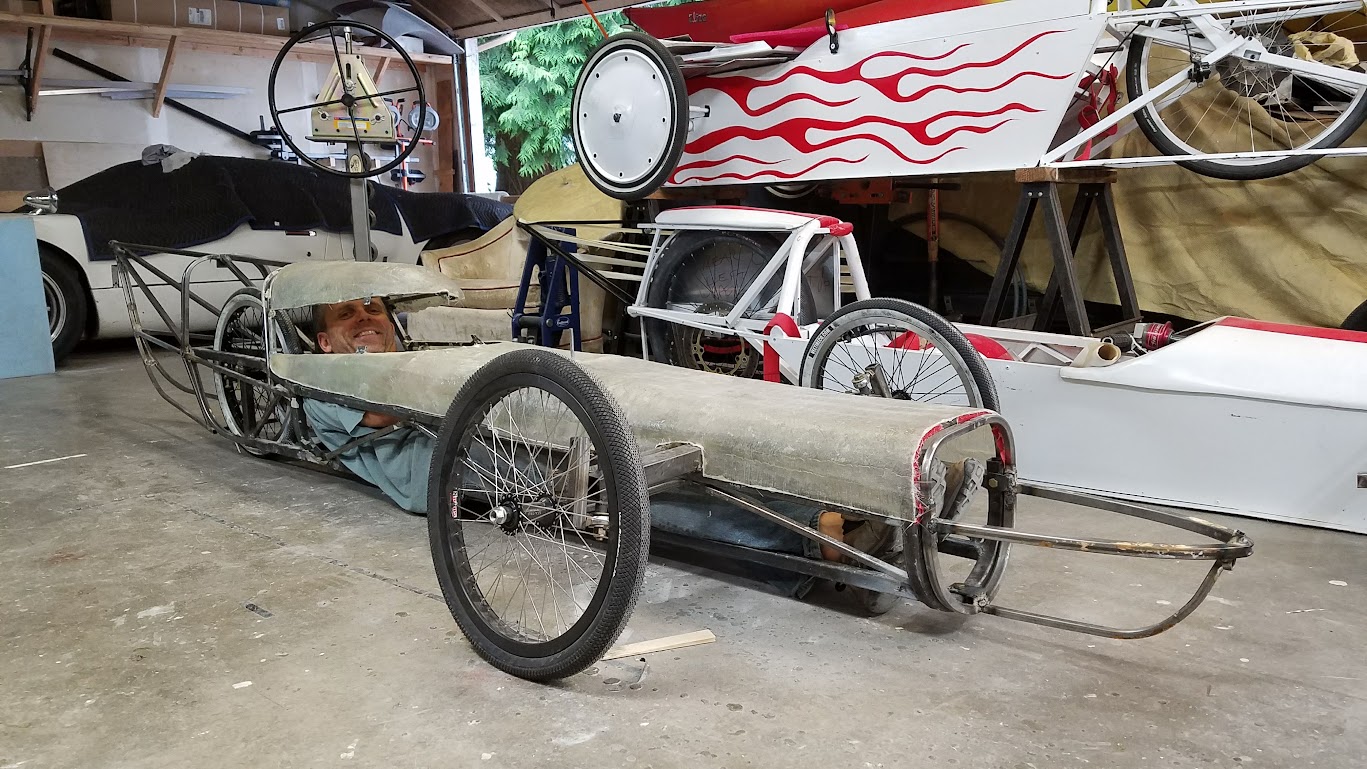 Supporter
Getting close to a fully-bodied racer. Need to panel in the chassis floor but got the windscreen fitted today: 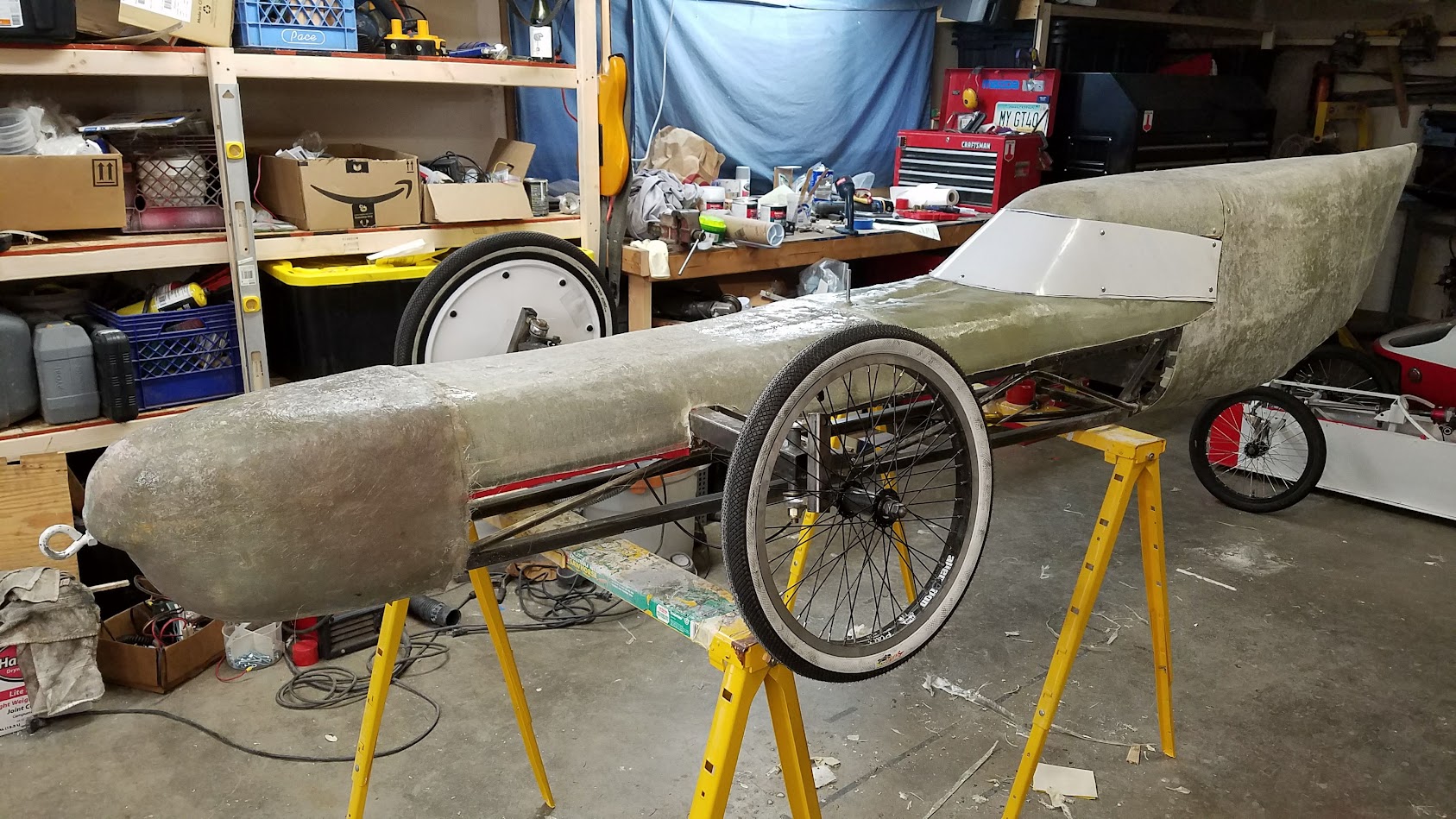 I am really quite happy with how it's turning out. Hopefully it will run as well as it looks.

Supporter
Progress has been made: 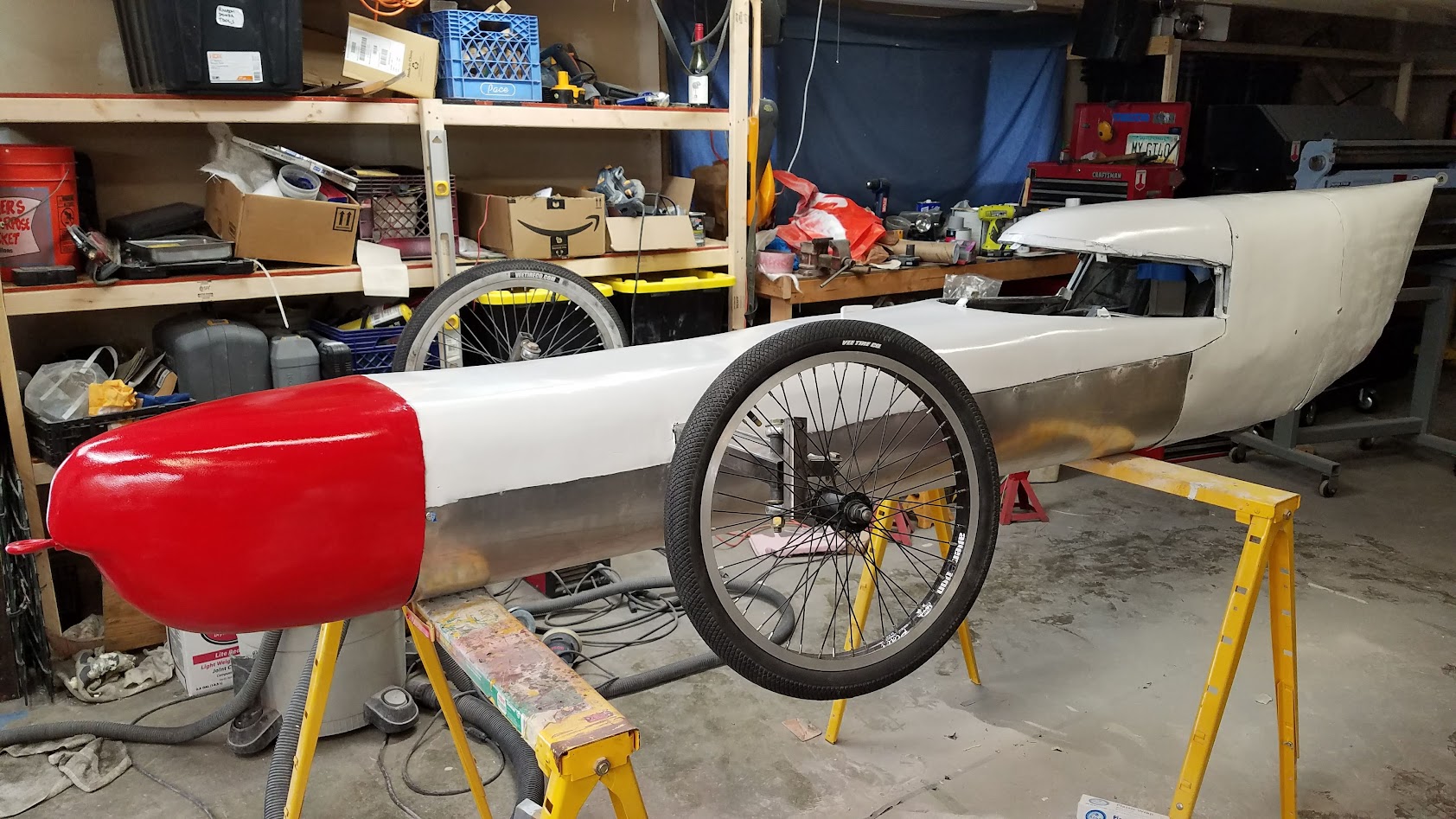 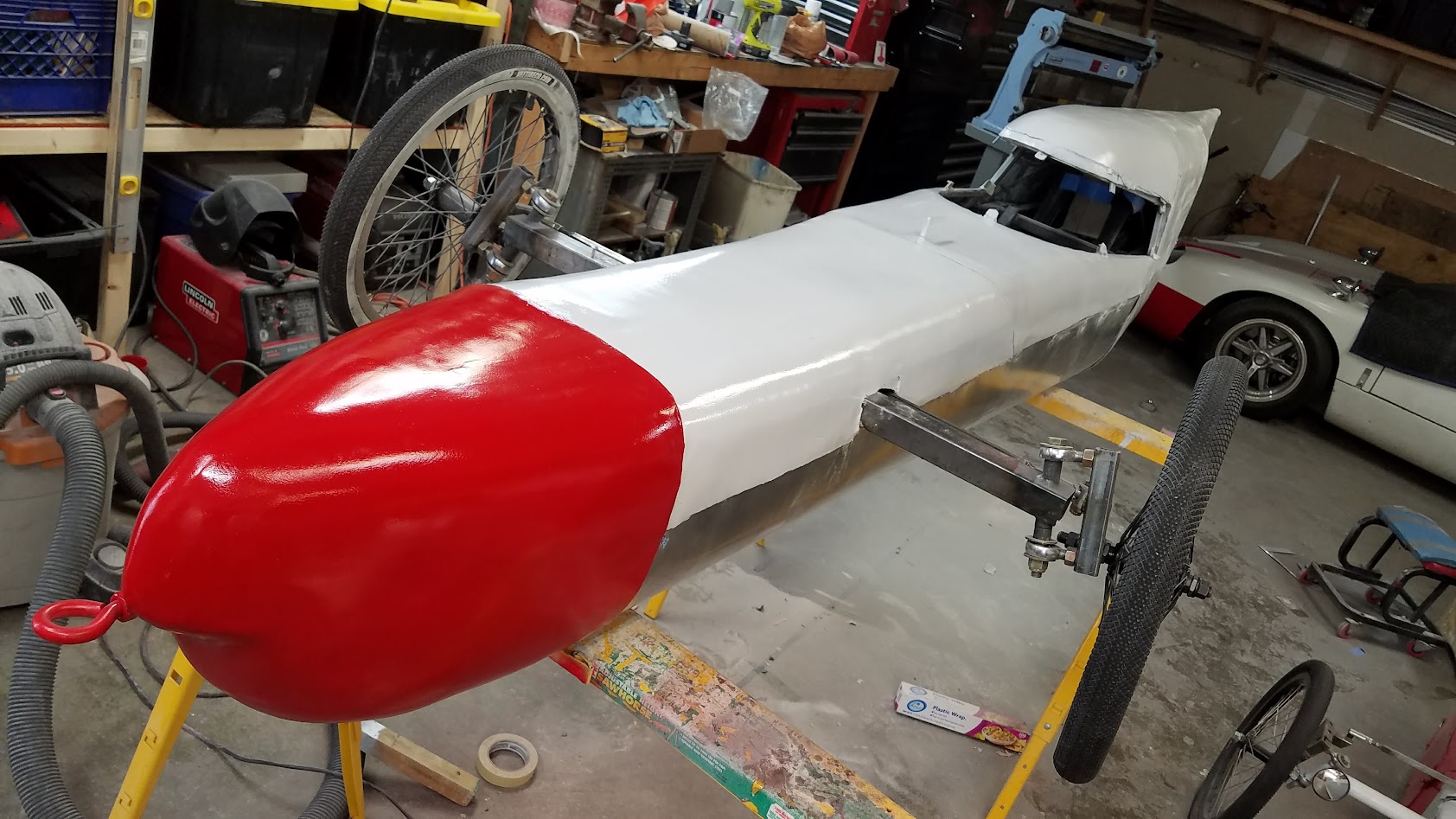 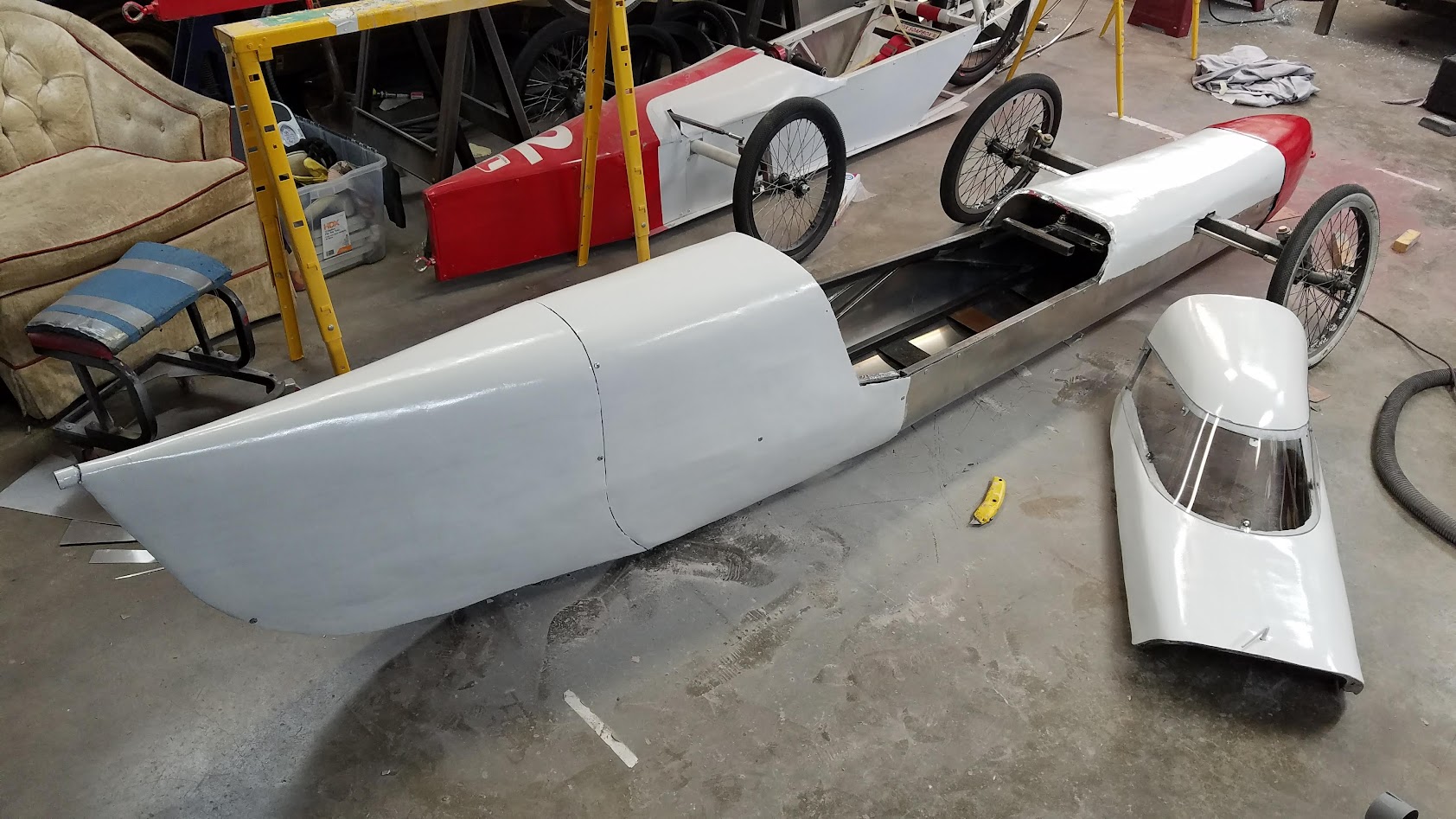 It's a hasty rattle can paint job and the body isn't exactly blocked out and flat, but I think it will get the job done for the occasion. I climbed in today for the first time with the windscreen on the canopy and was happy to see the optics of the screen are fairly undistorted. I was a little worried the world would be wavy as I drove past.

I have brakes and steering, the chassis has been aligned, bodywork is now ready enough... I think this one is ready for a test day.

I need to make some wheel disks for the front wheels and then build some enclosures and I think that will get me where I need to be. After that it will be working on fine tuning things.

I've also been contemplating front brakes for it. We had it out on a very small hill at the house and the rear brakes were very effective at slowing down mildly or locking the rear wheels. Moving braking power to the front axle would resolve that at the expense of minor aero penalty.

I ran off well compared to the Mk 1 though, which is encouraging!

The event is 8/18 if anyone will be in the neighborhood.

Staff member
Admin
Lifetime Supporter
Great job!!!!
I think I would just have a Pitot tube on the front instead of the eye hook... Make the competition nervous! You could always thread the eye hook into the tube... ((Wink))
:thumbsup:
F

That thing is way cool

Supporter
Thanks gents. I agree, it does look the part even just sitting still. Started working up my wheel disks (will be fiberglass) and took care of some cosmetics this morning, blacking out where the windscreen overlaps the canopy. Still trying to figure out the final livery. This morning's work sharpened up the lines even more though. I'm loving it: 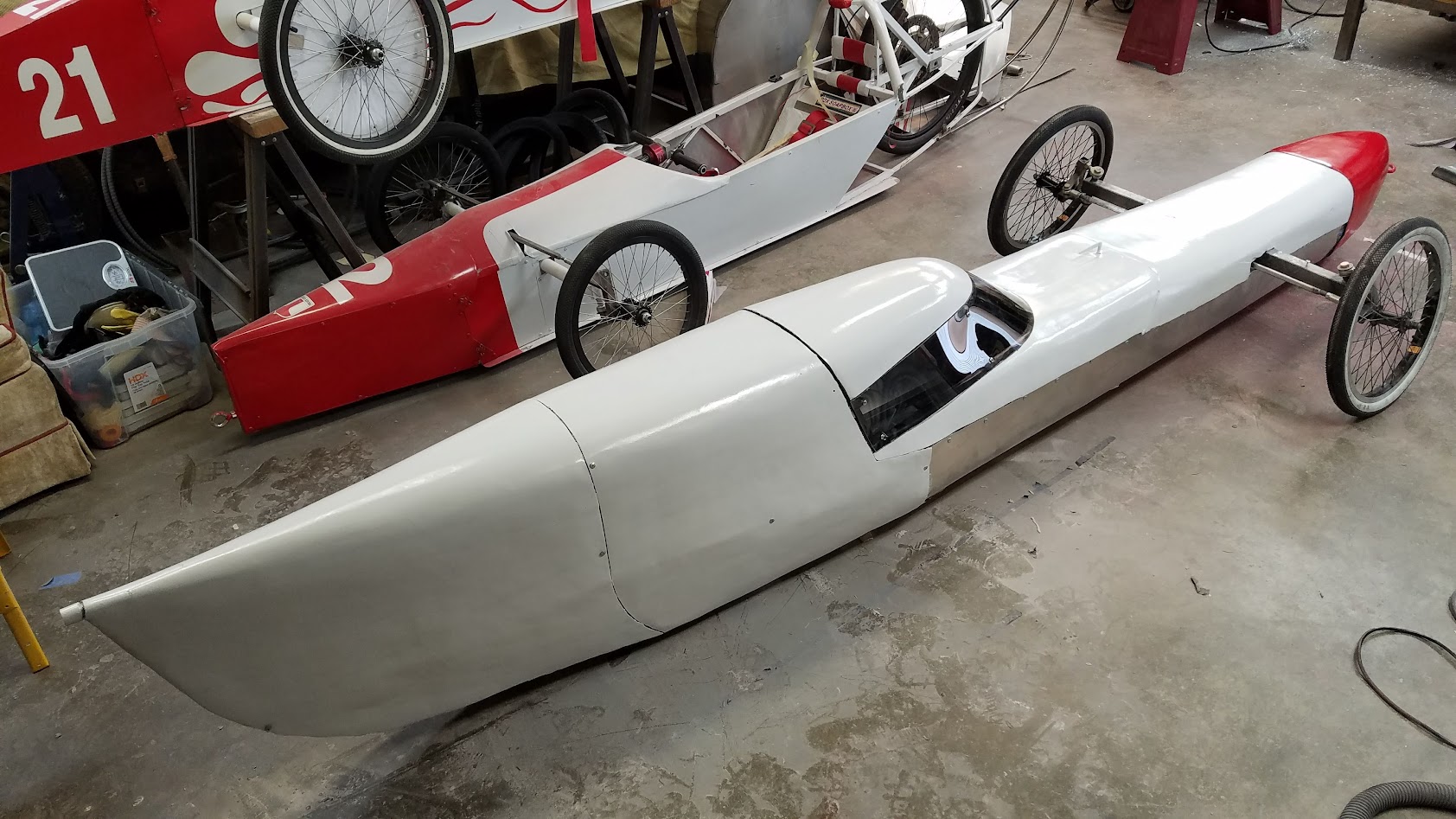 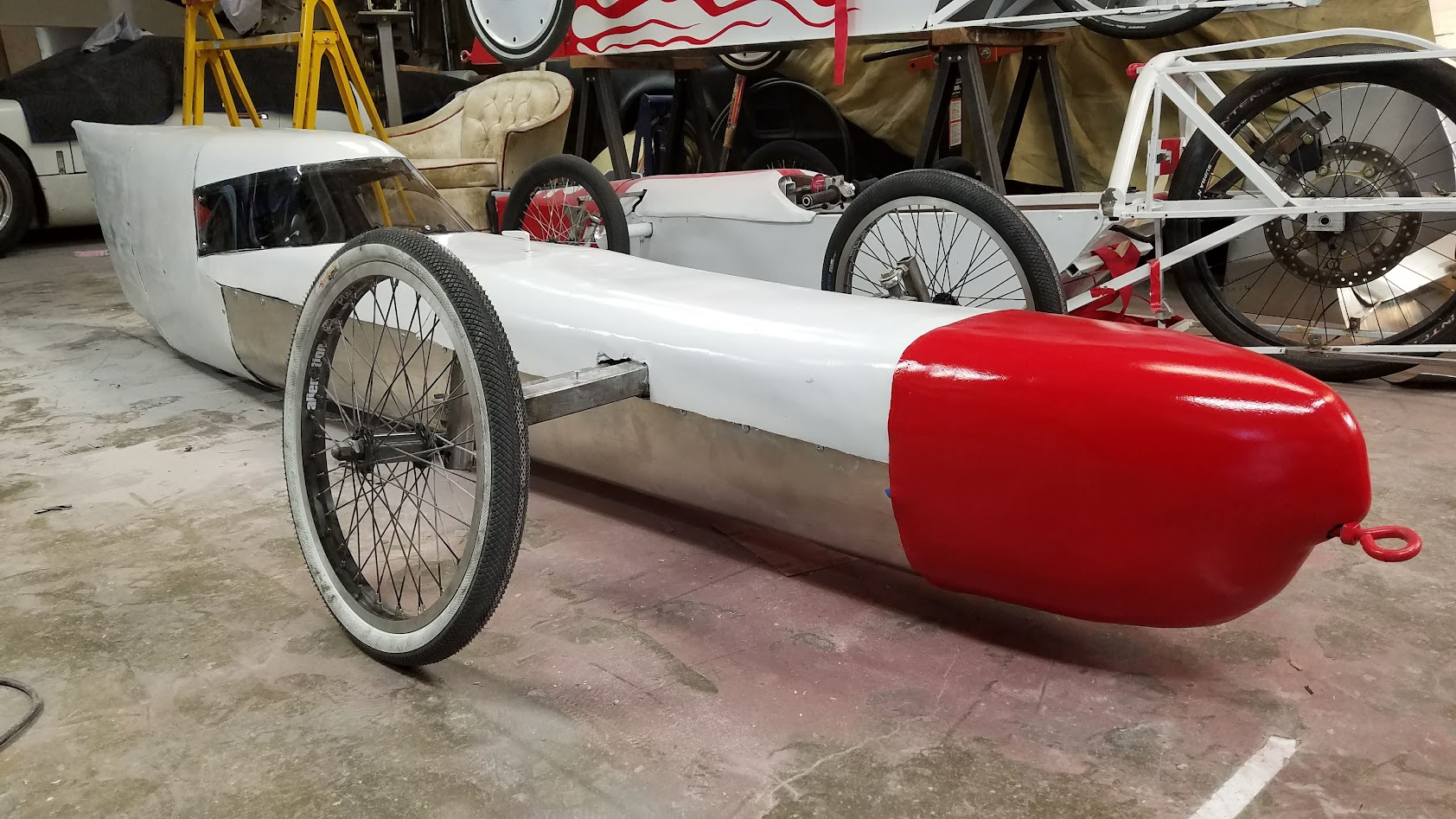 And one of the whole fleet, with the Mk I and II torn down for their brake mods and push tower work: 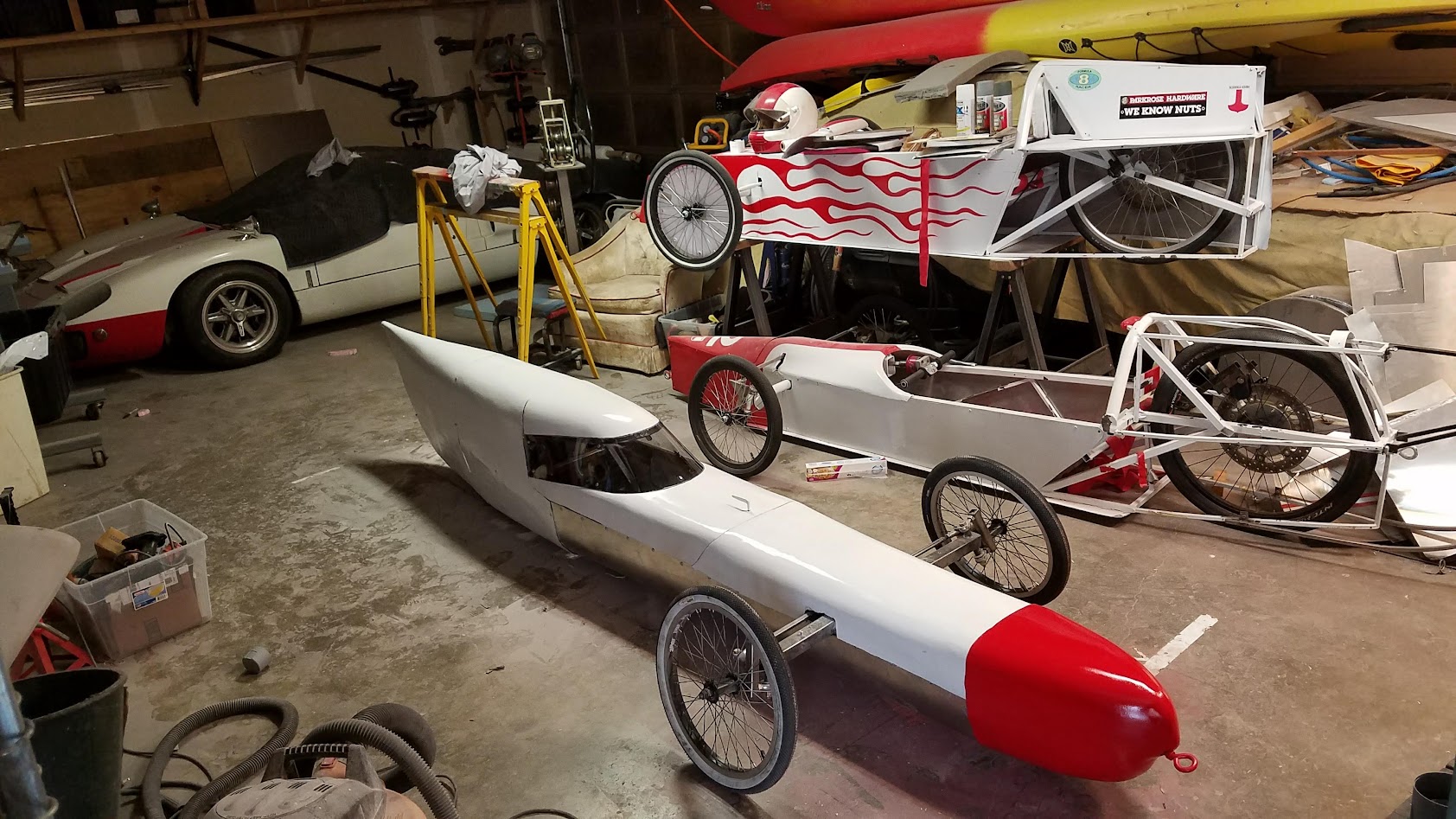 Staff member
Admin
Lifetime Supporter
Overlay a large decal of the American Flag on both sides of the tail and you’re sure to be the crowd favorite!!

Supporter
Had the fleet out on the hill for our first day of testing Fri. Things went OK, couple of mechanical issues to sort through, and some development still needed. It was hot and we had pretty blustery wind conditions with gusts in almost any direction at any given time, but mostly across the course. Made things interesting and wanderous at times...

Results were good though, with the new brakes on the old cars providing much better stopping power and not penalizing us on speed due to caliper drag. We were right back in the speed zone of last year's testing- 38 to 39 mph.

Best news of all though was getting the MkV out on the road for the first time. Only knocked down 2 runs before a terminal deficiency, but right out of the box we did 40 mph, and the second run was 41. Very encouraging! We have a little more aero work to do with the floor pan and seams, so I would hope there's another mph or two in there for us to dig up.

The car was nice and stable at speed though, and looked great. Here's a few seconds as it rolls by about 1/2 way down our test section, probably around 30 mph:

We're planning on thrashing on them this week and taking them back out on Fri.

Staff member
Admin
Lifetime Supporter
Looks great!
Have you done the yarn tufts on it with a fan to see what the air is doing at the canopy?
Just thinking about the windscreen spoilers put on some of the GT40 cars at Lemans.... Might look funny, but....

Supporter
Friday was another good day of testing. We made 11 passes down our short course close to town in the Gorge, with all three drivers and cars in attendance.

All three drivers with their respective rides: 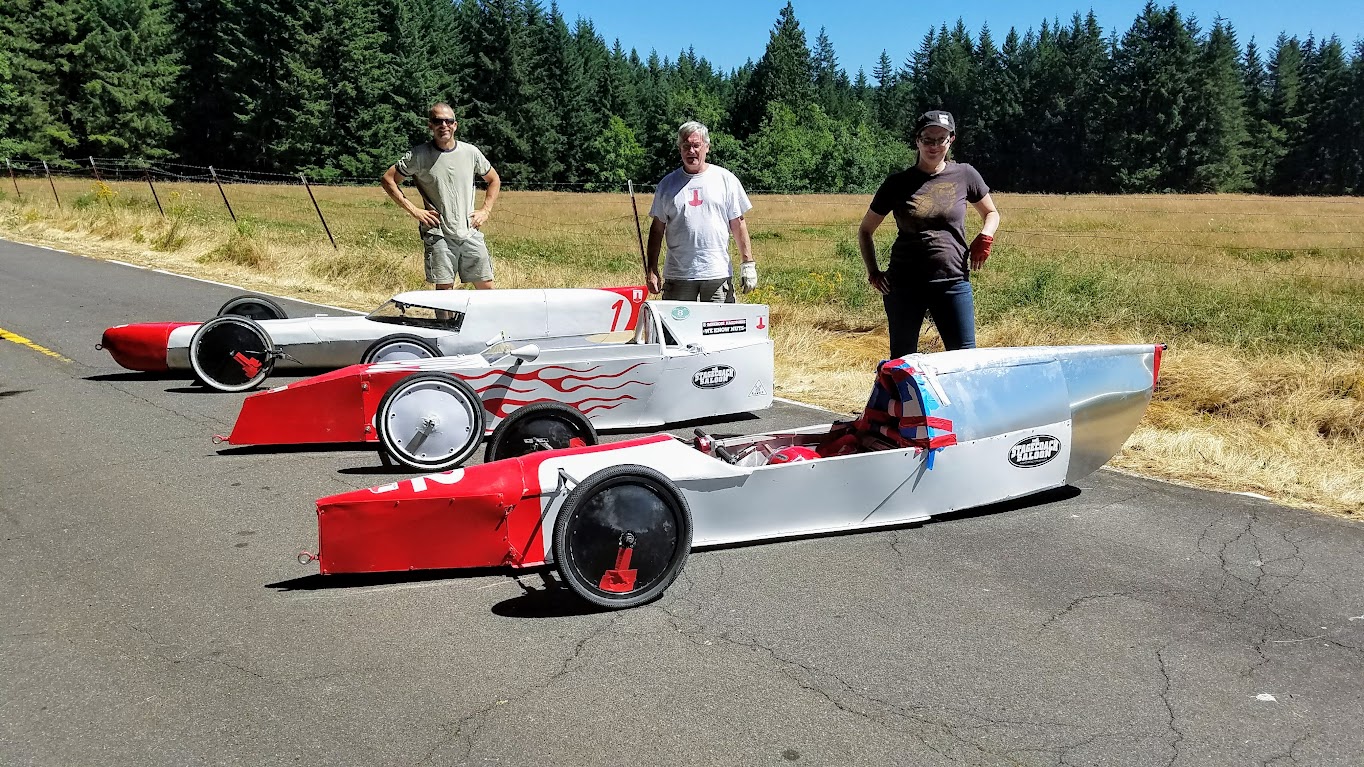 We were able to break a few more things today, but in general, things went very well. We still have some speed to dig out of the Mk I and think we have a lead to accomplish this. From there it will need some additional body panel and aero work and then get painted for its final livery and graphics applied.

Jenny belted into the Mk I: 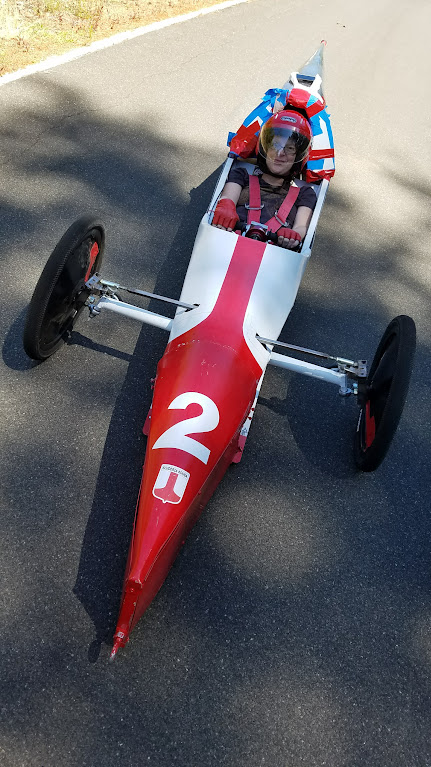 The Mk II was a different beast altogether. It ran 47 mph all day long. Didn't matter who was driving it, didn't matter where they drove. All its top speeds were in the 47.something range. We did add some weight for the final two passes and bumped it up to 49 mph, so there's something worth looking into there. All in all, it was an excellent day for it and Bill was quite happy! 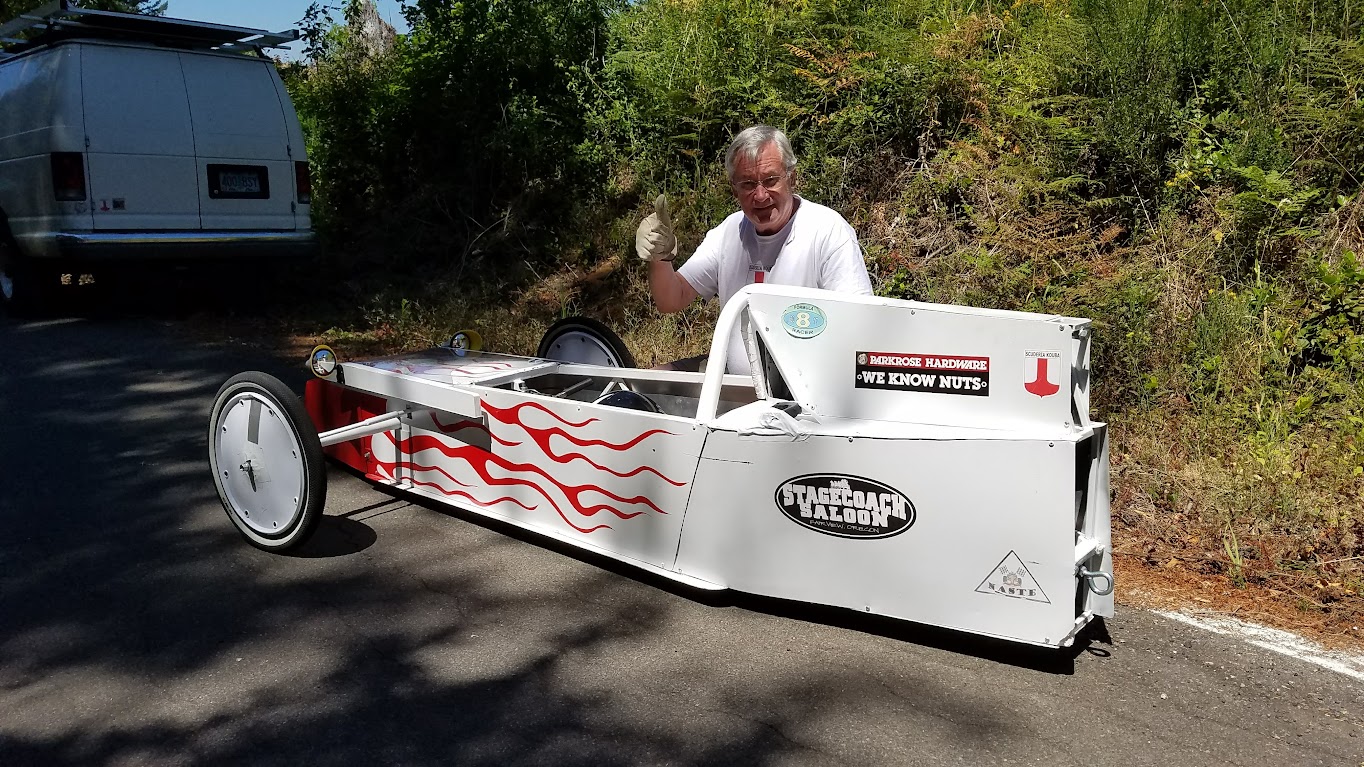 The Mk V had another interesting day. After a 50.7 mph first pass, it broke its brake cable at the start of the braking zone for the second, prompting me to slide ditch to ditch and drift around a corner to scrub off speed and then ease it off the road to high center on the chassis pan in the grass. I was told it appeared very dramatic from the outside but for some reason it was quite calm and collected during the maneuvers. After sitting out a few passes, the Mk I donated its brake cable (needs to be replaced anyway) which enabled the Mk V to make a few more passes. The speed was still there, knocking out runs consistently in the low 50's, with a top speed of 52.3 on a course where we hadn't topped 50 before.

The Mk V out in the open: 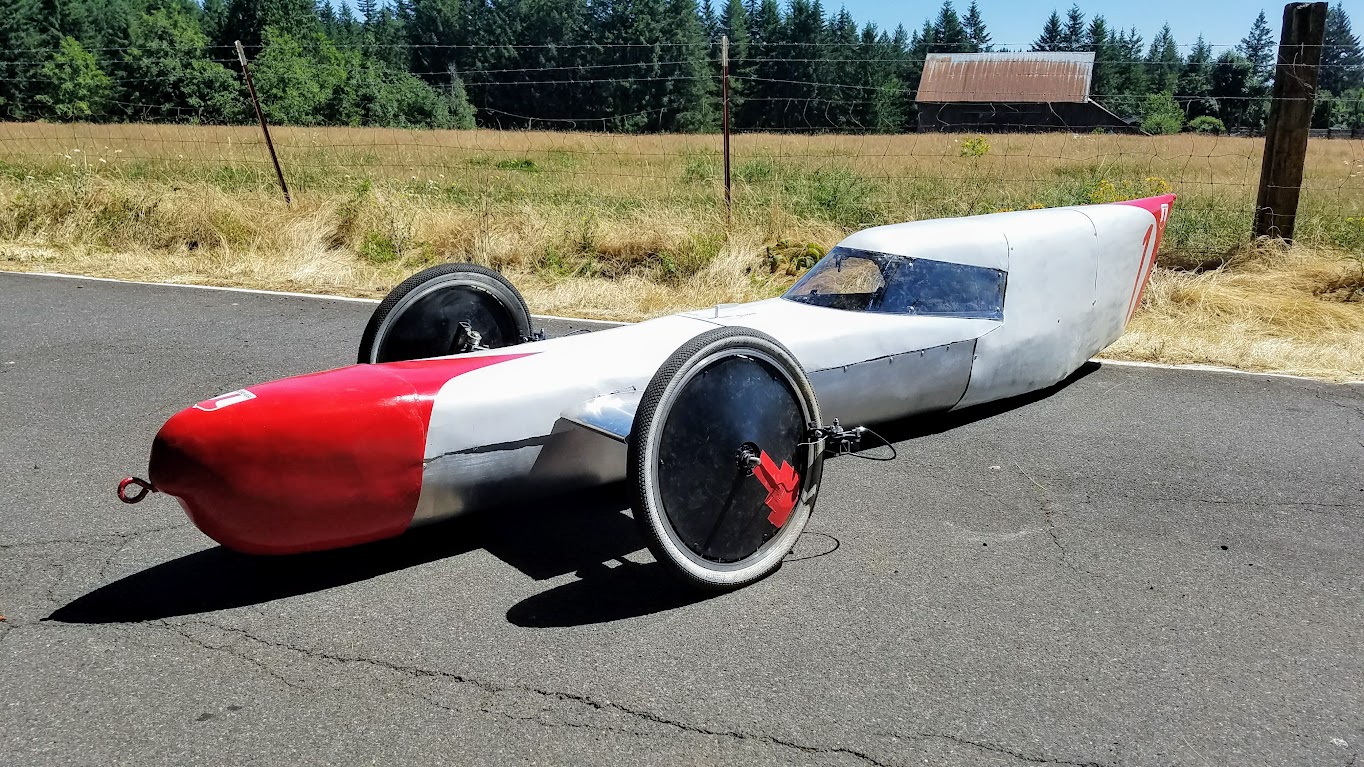 We experimented with weights and a few other settings, and while we still have work to do, we are reasonably prepared for the actual derby. We still have some midnight oil to burn, but we do enjoy the ride!

Thanks again to Bill, Jenny, and Jeff (and Johnny and Jessica) for a great day in the hills! 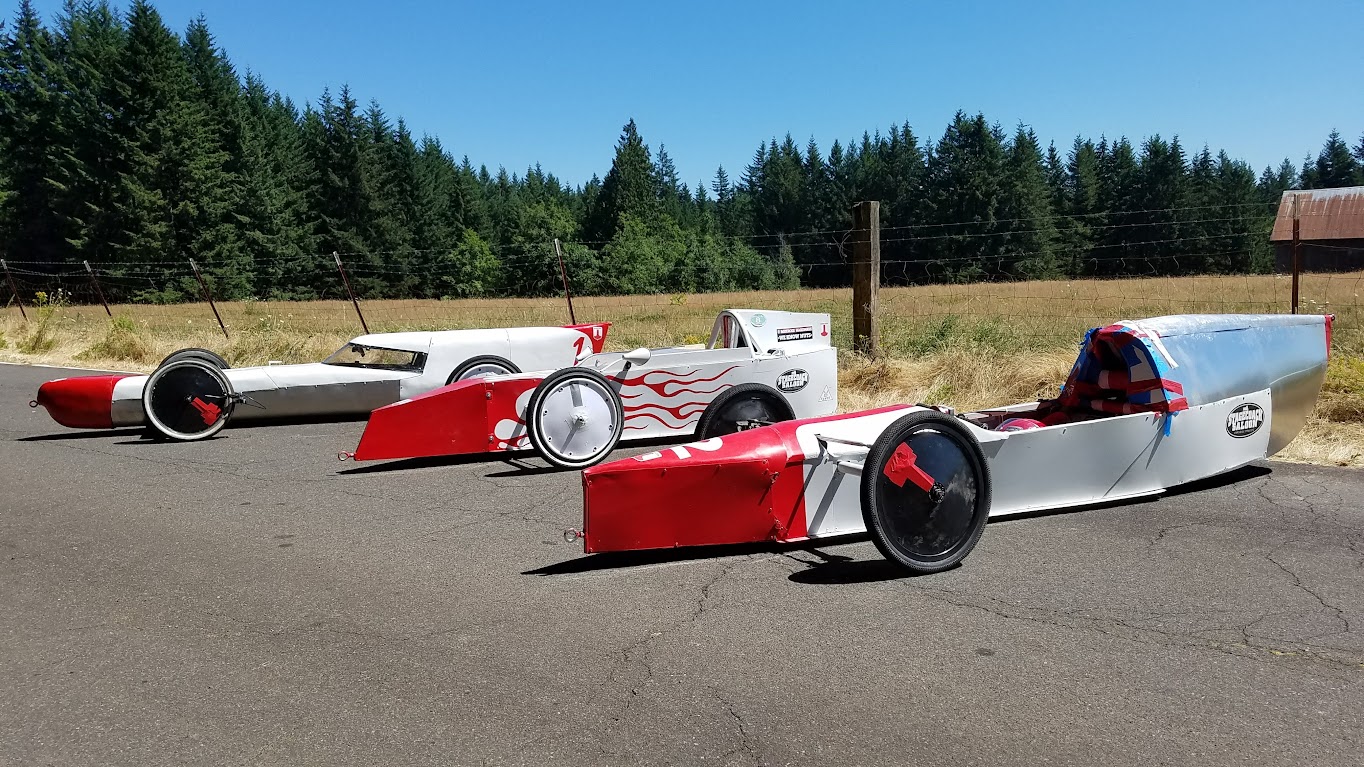 Staff member
Admin
Lifetime Supporter
Sounds like great fun!
I think I would be looking into some form of backup braking though.... That would have been a ride I’d not want to take...

Bill had set up a push practice session with the Marines and yesterday, we finally got to meet them.

Bill with the team: 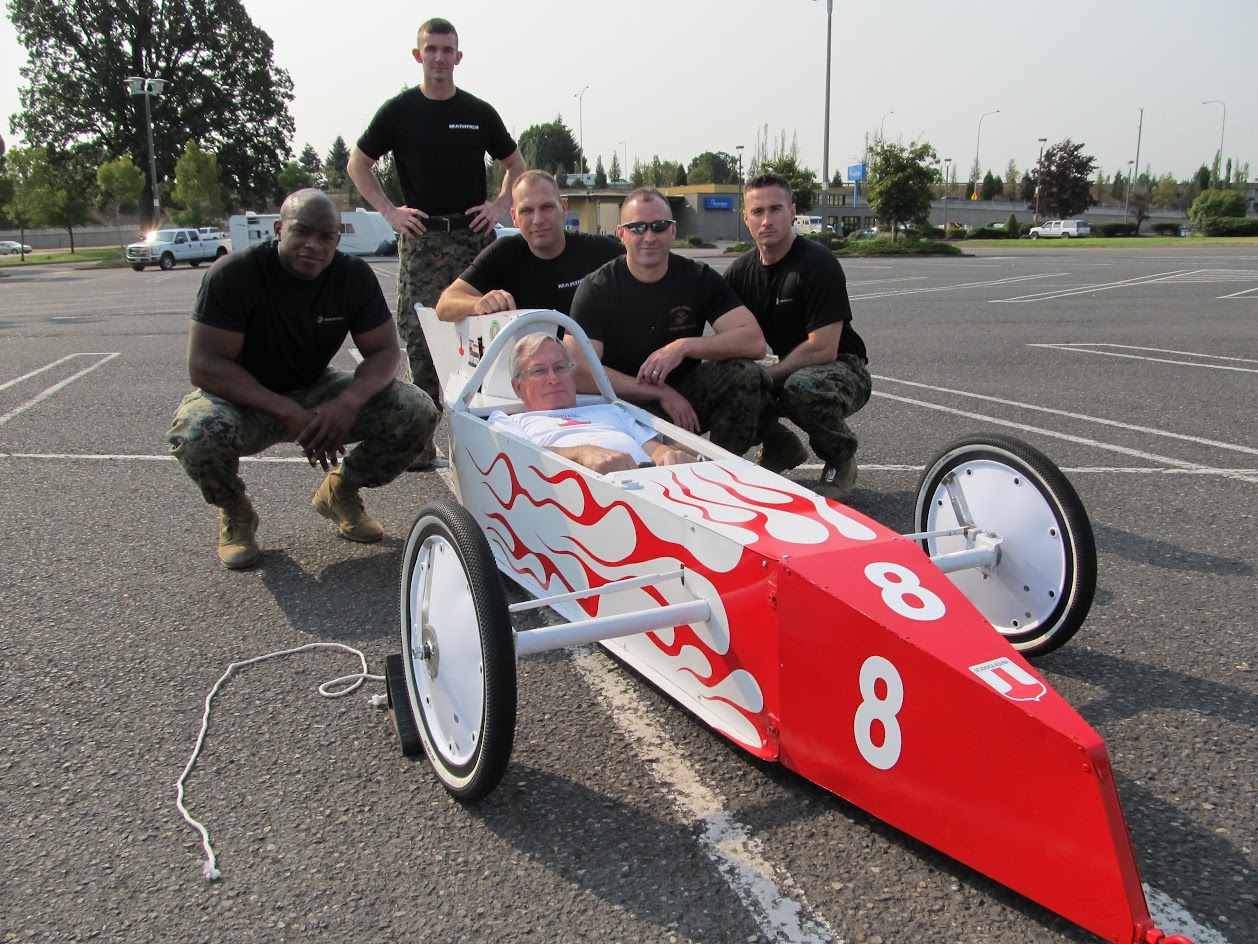 They greeted us promptly at 9am and after a quick outline of the start zone set up, start sequence, and rules, it was off to the races. After the first set of pushes, they settled into a rhythm and were soon drag racing each other through the start box and smack talking each other all the way back to the start line while we rolled around the lot to set up again. 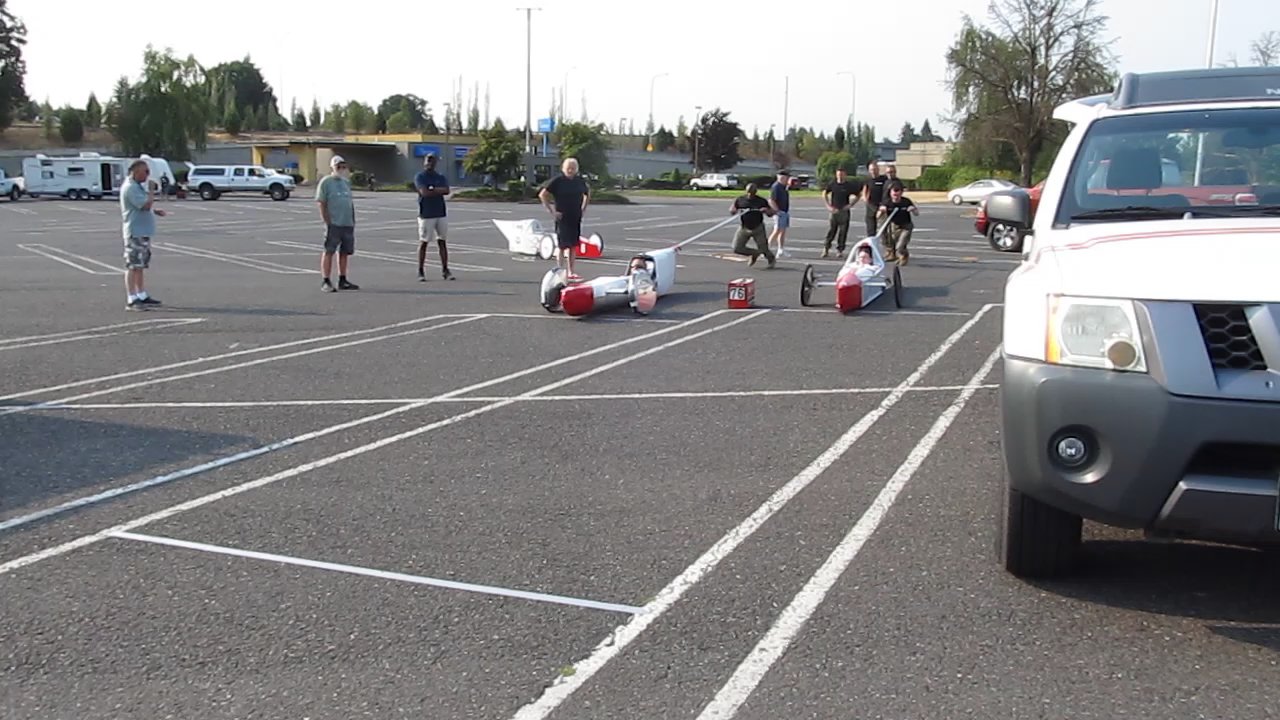 We consider double digits (anything >10 mph) to be a good start at the end of 10 yards, and these gentlemen were able to consistently deliver, even breaking into the 11's and a 12 or two. Things are looking good!

Once they were fairly comfortable shoving us around, we tried to let them run each other around. That didn't work so well. We needed quite a large shoehorn to fit these guys into the narrow confines of our cars.

Not quite going to make it: 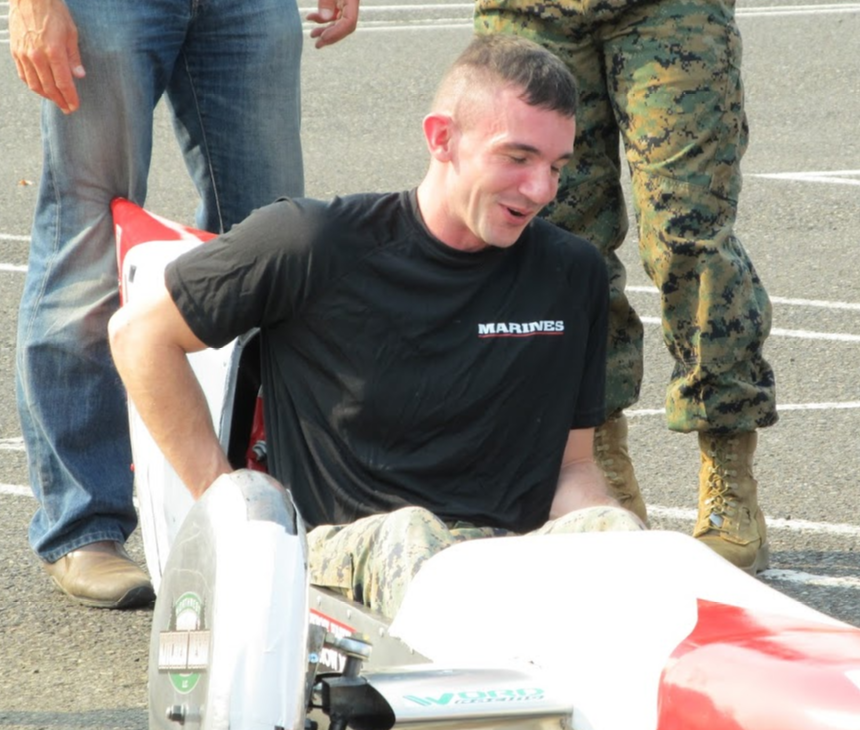 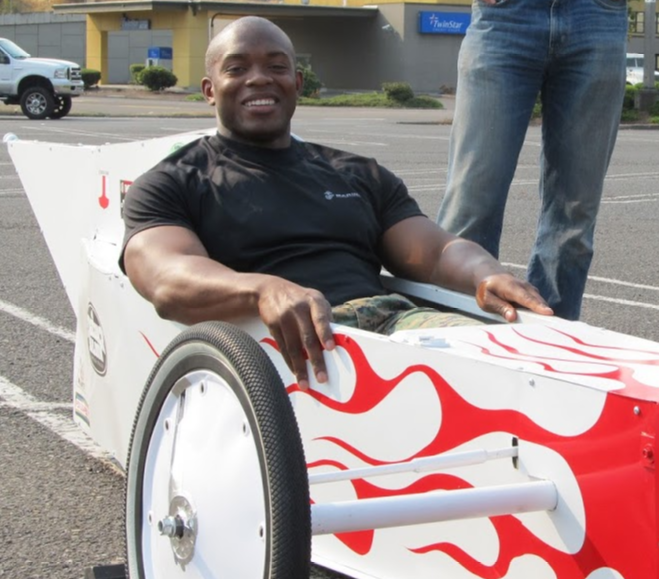 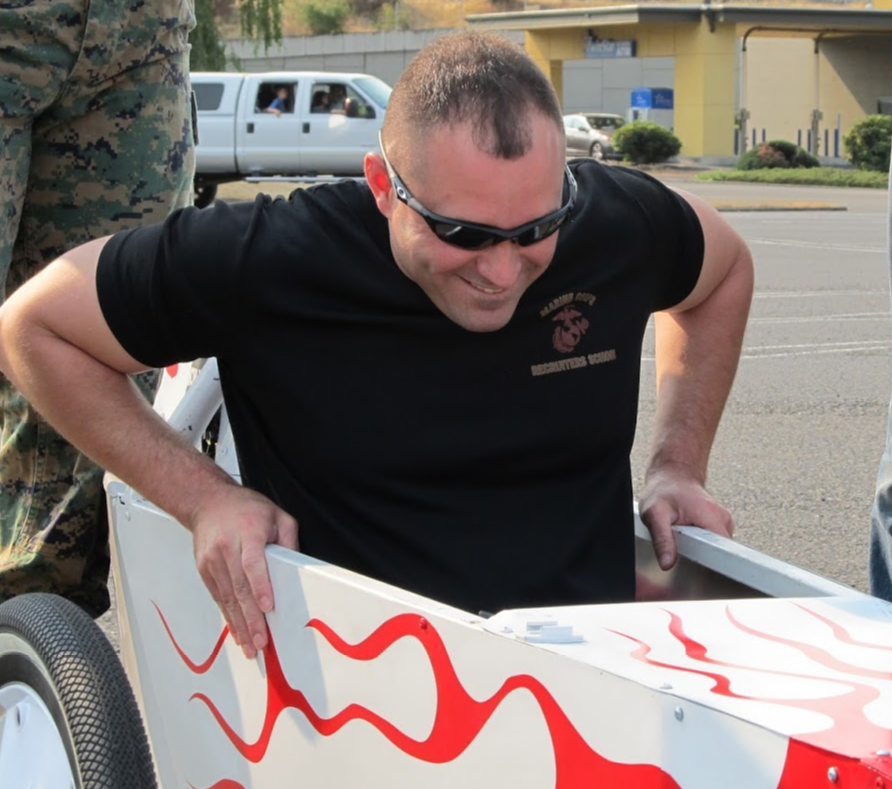 Despite not a single one of them being able to make a lap through the start box, they all seemed to have a fine time and were smiling and joking with each other over their abilities to get a car through the gates. 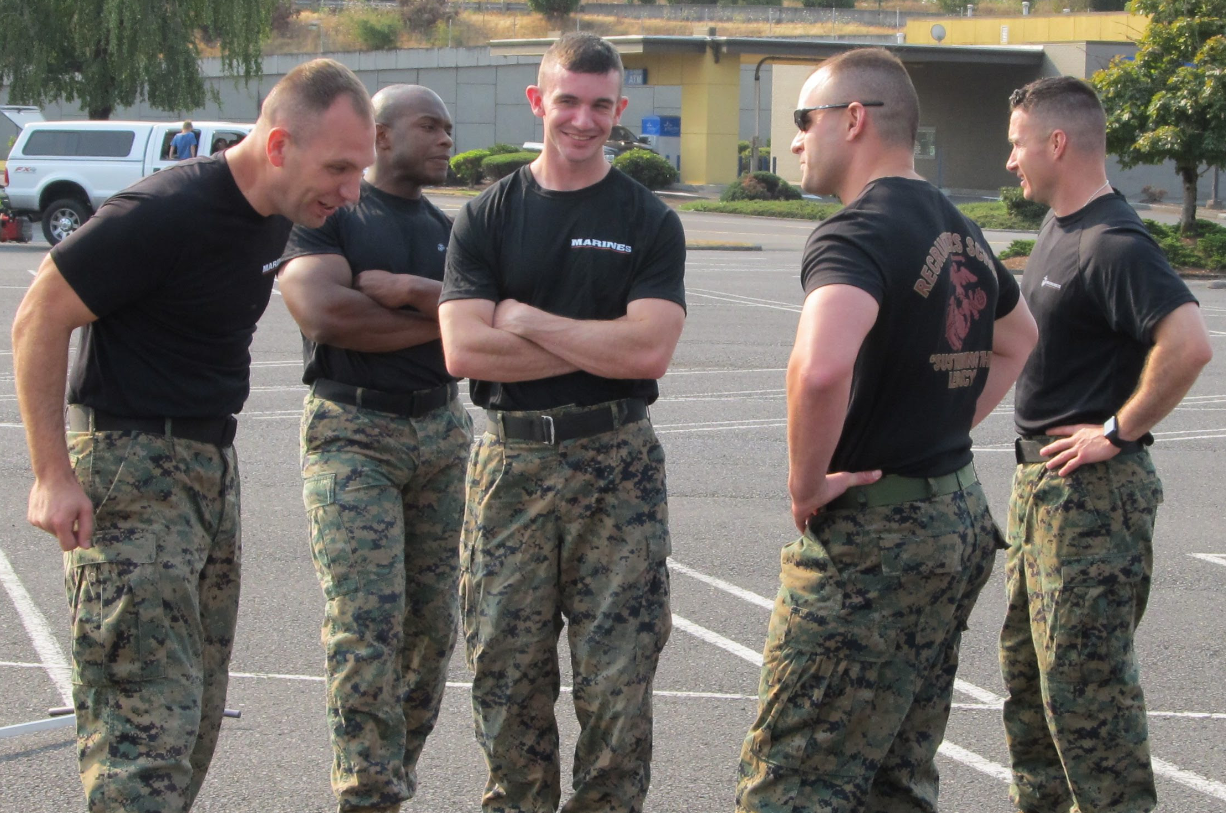 These are fairly tough men but it seemed they were allowing themselves to enjoy the experience. They made me proud to pay my taxes.

All in all, a very successful day and seems like an excellent partnership. We are honored and privileged to have them as part of our team.

Lots more pics and even a few videos: https://photos.app.goo.gl/XyHBRZtt6cyPLYDSA

Supporter
From testing yesterday... NOTHING BROKE!! Still have some tweaks to make but I finally think we're about where we need to be. All the cars are running extremely fast, the Mk V was still over 50 and the Mk I and II were both right up to it but not quite (49.9, 49.77). If we keep them in one piece, we will be in very good shape for the event.