Supporter
Love this thread! Good luck Chris!
When is the big day?

Things went very well on Friday. Well enough that I simply parked the Mk V after about 6 runs and called it good. I was running consistent low-50's in it on our short course and all systems were doing very well.

We do have a few mods to follow up on though. I took care of one this morning by removing slack from the Mk II's steering column. There were two passes which got really sketchy before we figured out exactly what was going on. Still to go is replacement of the Mk V's brake cables due to a kink at a pinch point and reinstalling the spoke cover for the rear wheel on the Mk II. The Mk I needs some wheel skirts built up for its front axle. Will knock it all out Weds-Fri this week.

We've also been invited to play a part in a news segment about the derby, so Thurs morning on channel 12's "Good Day Oregon" program (9am if you want to catch it) we'll be in the background somewhere making a ruckus.

A shot of the fleet from last week:

Supporter
Busy morning... all my PR manager has been running me ragged. Two news appearances:

KOIN ch6:
A montage from the 4 short spots they had this morning:


The event is tomorrow, definitely looking forward to running down the hill!! CAN'T WAIT!!!

Supporter
So... WE WON AGAIN!! 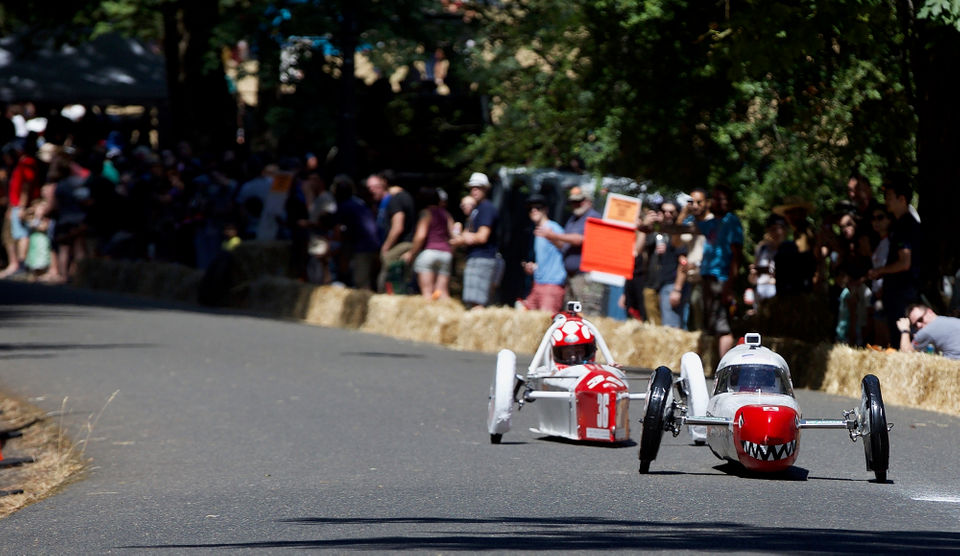 Managed to get 2 cars into the final but someone snuck to the inside of Jenny on the big turn and cut off her line, making it a 1-3 Scuderia Kouba finish.

It was a fabulous day and a fantastic team effort, and the Marines were absolutely fantastic on their end and got us all out to great starts. There was only one downer for the team- Bill got a little behind on his steering on his first run and put the Mk II over. You can see his handiwork here:


Watching the video made me glad that I built the cars with the roll structure I wanted. He was fine and we made an attempt to resurrect the Mk II, but it was a little more than we could deal with (bent end of the axle where the upright pivots). Nothing a new piece of C-channel can't fix, but not going to happen on the hill.

In the end, we were close to a course record but not likely going to hit it without the temps getting super hot like it was on the day it was set (104° back in 2015; 71.1 seconds). I was more than happy with runs in the 73's and 72's with the FTOD in the final of 72.66 seconds. In addition, even though it wasn't a 1-2, the team did make history as Jenny is the first woman to ever make the finals. She has her sights firmly set for next year!

What a great time, great event, and a great way to play with friends.

I'l post more pics later as they surface, but here's a great little write up from the Oregonian (even if they got the team name backwards- and have now corrected!):

Staff member
Admin
Lifetime Supporter
Wow, that was a pretty hairy moment! Need wider/taller back wheel with a little better contact patch or maybe active aero wing? Both would be costly in terms of weight, drag and rolling resistance.... I’m pretty sure you’ve already thought all those thoughts and then some....
Kudos to you and the team!
J

Have you tried altering front axle toe in/out settings, any camber apart from verticle will induce drag due to 'coneing' off tire contact patch, in fact I wonder if it could be steered by a combination of camber and castor change only, after all a motorbike requires very little if any steering input on flat highway use and you can do some fairly major direction changes by weight shift and leaning left or right ,

Supporter
I think to have a shot at that 71 seconds record, it would require an immense amount of testing and experimentation. After reviewing a number of entries this year with disk brakes, I think there is a front end rebuild coming for all cars. At that time, I will reverse the heim joints and take a stab at setting up the front end as neutrally as possible. The good thing is that I feel comfortable with the axial loading capacity of the wheels as the Mk II is set up that way (no camber) and handled well when the steering worked. I think the aero package for the Mk V is pretty decent, although there may be some optimization possible in the details and at the tail.

Definitely need to do some homework regarding large dia axle disk brake hubs capable of running a 20" rim.

The only real thing which needs to be changed at this point is the rear tire (and Bill's shorts). There is a massive, tangible flat spot on it. The issue was with the steering column, which is a tube within a tube, and in which we have tension bolts to squeeze the tube which is steering against the tube in which it rides. The forward one either backed out (not likely as it was lock nutted) or there was a feature inside the tube which wore down and re-introduced slack in the system. The post-crash tear down revealed a bit of slack in the forward end of the column, allowing the bellcrank to slop around inside the end of the tube. With the quickness of the steering ratio I built into the system, the slop was enough for Bill to get behind in keeping up with the steering and not remain in control of it.

I can assure you that when we originally rectified the issue and put the bolts and lock nuts in, the car was absolutely rock solid and every bit as fast as the Mk I this year. At our previous test (after we had fixed it), we stuck a friend in the cockpit who had never been down the hill in any of the cars and he was super impressed with it and ran it comfortably to 49 mph. I think the design and layout has been validated (it's the same as the Mk I in many respects), but the loosening of the column was the issue.

Once life settles down, we will figure out what we're going to do about the front end- I want disks on it (on all the cars actually)- and then rebuild to suit. Active aero would be opening a can of worms and I see no overall benefit from it.

As per Jac's suggestion, I think any new front ends will be built with minimal static camber and I will reverse the ends of the heim joints to adjust the contact patch. Despite having a little nervousness about sliding off of the Learning Curve, I am thinking more and more about chasing that course record. It could give me something tangible to do in the off season.

It is good practice to cross-bolt tube joints rather than use only one bolt. Redundancy is your friend.

Supporter
Pics from the event are trickling in... Being in the event makes it hard to get your own good pictures but through the magic of the internet, I have been able to gather some neat ones. I put this album together with the ones I have so far:

Will add others as they surface. What a great day! 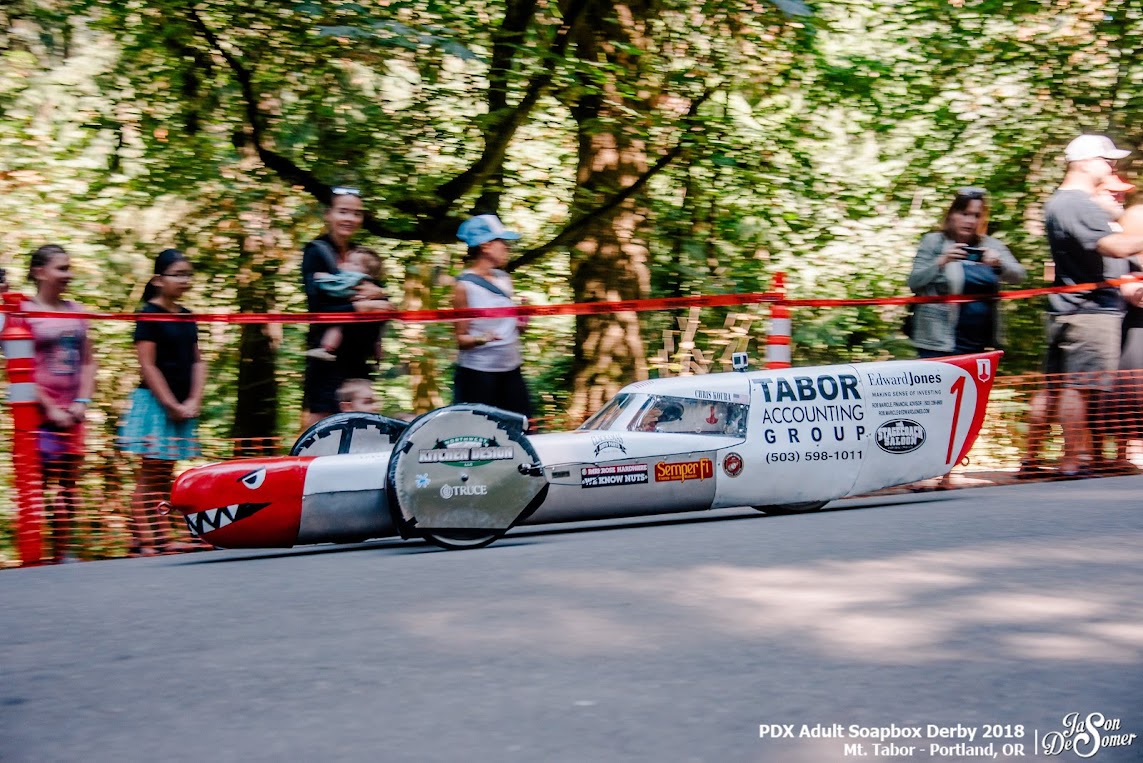