Hacking an IDA 'Weber', turning it into EFI

As an engineering challenge to myself, I'm going to attempt to strip and hack into a set of Chinese 48 IDFs or 44 IDA's, and see if I can modify the body to contain fuel injectors. (and adding a throttle position sensor etc.)

Basically, I want to see if I can engineer myself something similar to the V8 Weber EFI-8stack by Borla.

As a starting point, what do you guys think is the better starting point? Since i'm not looking at carburation, fuel flow, atomisation and tuning is not relevant to me.
What might be more relevant is the amount of 'space' available in the floater/center section of these castings.

As I have not ever held or stripped or seen a set of webers myself, hence I'm asking your inputs. Which one I might have the biggest chance of succes with you feel? 48IDA or 44IDF?

EDIT: I chose an 48IDA, busy chopping it up trying to make it work. 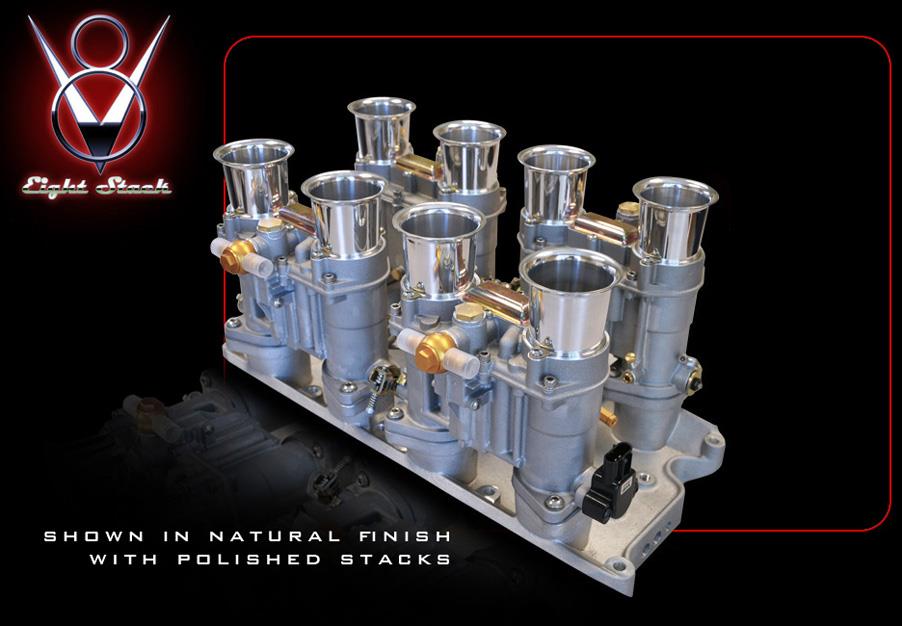 Admin
Lifetime Supporter
I had a similar plan many years ago. But now if I were to do something like this, I would get some of the new smaller Bosch injectors and machine the manifold or fabricate 1/2” spacers with injector ports to fit under the carb body’s which would now just be air-valve throttle bodies. Injectors could be in the valley and hidden under a Turkey pan / tray...
M

Jenvey are in the process to do in their serie "Heritage" what you intend to do .....
From their site ;
PRODUCT DETAILS
The Jenvey Heritage IDF throttle body comes in TDFX45 and TDFX48 mm bore options. Available in a single, pair or quad setup.
It includes a built in fuel rail, 350CC injectors (250CC and 550CC also available), extension looms to bring the injector connector to the underside of the throttle body and a hidden internal throttle position

Just look at their site ; https://store.jenvey.co.uk/heritage/heritage-idf-throttle-body
there is a nice picture of a Ford V8 arrangements
J

Big-Foot said:
I had a similar plan many years ago. But now if I were to do something like this, I would get some of the new smaller Bosch injectors and machine the manifold or fabricate 1/2” spacers with injector ports to fit under the carb body’s which would now just be air-valve throttle bodies. Injectors could be in the valley and hidden under a Turkey pan / tray...
Click to expand...

Thas actually a good idea. I always hated the fact that the Borla's sprayed directly onto the butterfly plate.. can't be good for fuelling accuracy.

Thanks Michel, i'm aware of Jenvey's product, but as mentioned above, I was more looking to build it myself somehow. Just like the challange.
I can see though, that Jenvey's smarter about injector placement, and he is in fact injecting just below the throttle plate. Good idea

That is a great idea @Big-Foot.
at least that way you could get the injector spraying into the right location to make it work efficiently.
Cant remember seeing an 8 stack throttle body manifold with injector inlet ports on it, like you normally find on the Hi-ram style ones.
R 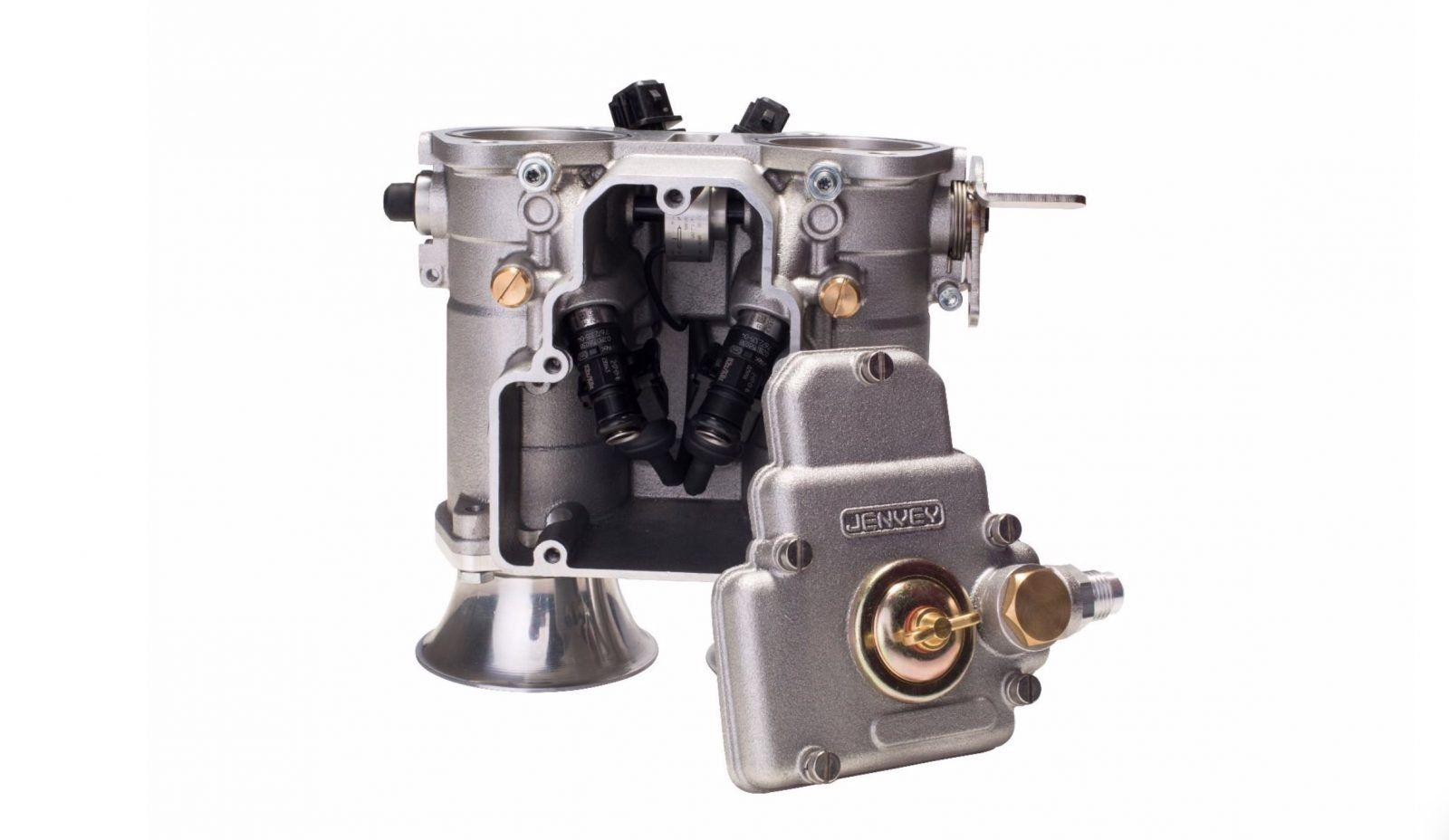 The Jenvey ones appear to use a side draft style housing, not the vertical ones.
i have some photos somewhere of these on a GT40. looked good.
I

Lifetime Supporter
I thought I saw once a manifold that had been modified to have injectors in it with only the carbs on top for the air part. The injectors would then be hidden beneath the turkey pan so not seen.

IanAnderson said:
I thought I saw once a manifold that had been modified to have injectors in it with only the carbs on top for the air part. The injectors would then be hidden beneath the turkey pan so not seen.

I think that's exactly what Randy was describing too.. sounds like an easy way to DIY myself an EFI Weber look..
J

Ryan Love said:
That is a great idea @Big-Foot.
at least that way you could get the injector spraying into the right location to make it work efficiently.
Cant remember seeing an 8 stack throttle body manifold with injector inlet ports on it, like you normally find on the Hi-ram style ones.
Click to expand...

I don't think such a manifold exists, but it is easily made up. A few aluminum blocks to be welded up (or brazed maybe to prevent distortion), drill them to the right diameter for the o-rings on your injector and presto.
I like this idea better than modifying a weber.
Also, I might get away with cheap chinese weber knock-offs, if all I use them for is air throttling.. or am I missing something here?

I have 8 blocks, I think 1 inch thick that I used as spacers under my webers when I had to add a PCV system for my initial BAR inspection in Kalifornia. Does anyone know what the bore diameter would need to be for the smallest injectors? Just curious.
J

Supporter
Smallest I've seen is approx 10mm, 3/8" I would say.. thats the landing for the o-rings.
J

Supporter
OK: Decision made, I'm going for it. I ordered a manifold from Blue Thunder, used by Jenvey and Borla alike. It has the plenum chamber for EFI systems, giving a smoother MAP signal for the ECU to use. It should also allow a Idle Air Control valve to be used I think, but I have to think a bit harder around that.
Also ordered a set of Chinese Weber replicas, which I'm going to strip and 'gut' the carburation items out of. Just a throttle body disguised as a Weber, is what I'm going for.

The plan is to build a few aluminum 'blocks' for the injectors + mounting of the rails, and braze them onto the manifold, drill them out into the inlet ports. This way the fuel is injected below the throttle plate too, which should make for a much easier Idle tuning. 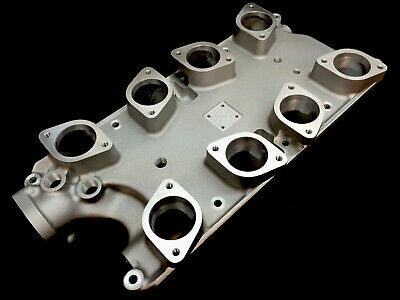 So aluminium injector seats in blue, injectors in orange, and fuel rails in red as per below very rough sketch.
Going to use LS3 injectors, as they are the right flowrate and tiny.. should help. 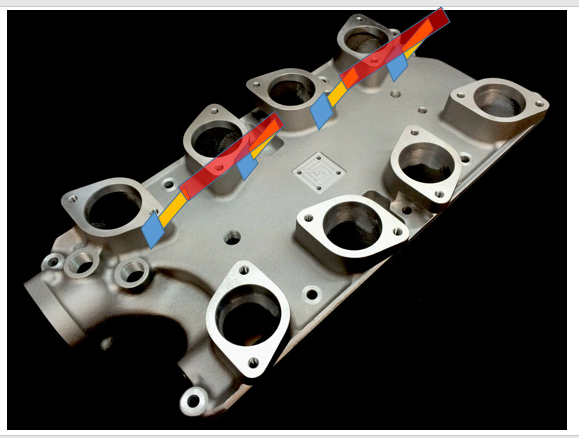 A couple of challenges still await:
- Figuring out how and where to mount a Throttle Position Sensor (TPS). There are kits on the market, but only for sidedrafts, not downdrafts. I'll have a look if I can steal some ideas from them.
- The throttle linkage I'll have to develop from scratch. My biggest concern is that the fuel rail segments are going to interfere with the 'normal' linkage setups. We'll wait and see, I'm sure I'll find a way to make it work.

Not sure about the turkey-pan yet. Normally I believe this attaches in between the manifold and the carburetors, as a cold-air-intake mechanism. This is not possible now, due to the injectors and fuel rails that will be hiding there.
Another option is to mount the turkey pan between the carb and the trumpets, which would hide the injectors and rails perfectly. Only thing I don't really like about that option, is the fact that it also hides the beautiful webers that i'm installing!

Any ideas on dealing with the above?

(Oww, FYI I'm quite familiar with EFI tuning myself, hence I like the challange on EFI tuning a set of ITB's. Won't be easy, but I think with this setup, and an ECU that has specific ITB options (to blend TPS and MAP tuning) it should work out)

What do you mean with plenum chamber for EFI systems? Is it simply said a single plane or open plenum.
If so you are not talking about ITB's and IRS anymore ECU settings related as those are settings for IRS.
J

Supporter
Hi JP. The Blue Thunder has a double-deck design. I'm not sure if the pictures below are actually from a blue thunder manifold, but its exactly the same idea.
Each inlet has a small orifice drilled into this 'plenum' area, and collectively they create a stable MAP vacuum signal. It works very similar to the 'spider type MAP collectors' you sometimes see people adding on ITB manifolds, but now part of the casting design.

So in effect the actual air intake into the cylinders is still very much as-per ITB, but you have a clearer signal on MAP. This should aleviate some of the tuning issues with EFI and ITB. I still expect to have to setup the ITB config to switch from speed-density (up to +- 85kpa) to alpha-N, somewhere around 15-25% throttle opening.. but we'll see that once we're tuning.

Supporter
Found the blue-thunder pictures I was looking for 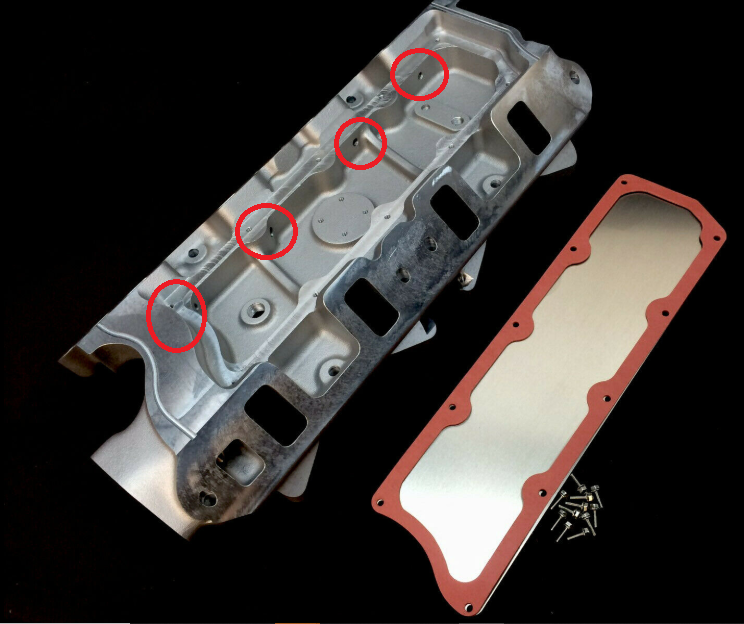 shame you cant put the injectors down there as well @Jazz

Lifetime Supporter
Man, wish I'd know I have a manifold just like that on the shelf with a set of 48 IDF's mounted too!
J

Ryan Love said:
shame you cant put the injectors down there as well @Jazz
Click to expand...

Actually... that is not a bad idea!! I like it I have first to receive the manifold to see how much space there is, but I won't rule it out. If there is space, it might actually be the ideal location, and use a few AN bulkhead fittings to feed through.

Love this forum, so many crazy people like me here
R

Ryan Love said:
shame you cant put the injectors down there as well @Jazz
Click to expand...

Often thought that myself.
Dead head the injectors to simplify the incoming fuel (like on LS engines)

ricadona said:
Often thought that myself.
Dead head the injectors to simplify the incoming fuel (like on LS engines)

Yeah, with all those good ideas, I'm eager to get my hands on the manifold to start sketching out some ideas. w.r.t drilling I was considering machining aluminium injector seat 'bungs' 14mm ID (for injector) and approx 20mm OD. I can then drill a 20mm hole with less accuracy or suface finish, and braze the bung into the manifold. That should work, even in that congested 'plenum' area.

I'm more concerned about making a 'fuel rail' type thing inside the plenum chamber. No idea how that's going to fit or work, might have to make custom aluminium bungs again. Looking for something much more compact than AN fittings and braided hoses.. that won't fit inside there for sure.

Update: I found an EFI company that makes 'external injector mounts' that means you don't have to use a solid fuel rail at all, but rather mount each injector individually and daisy-chain them with AN-hoses (or some other way). Might just work. 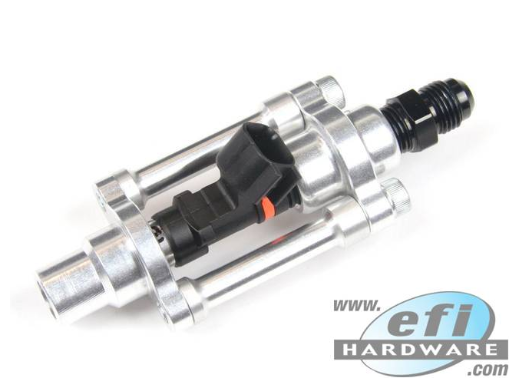 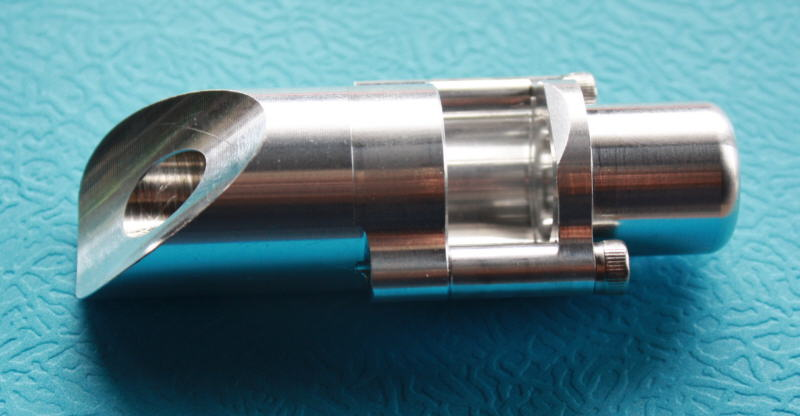