Lifetime Supporter
Colin, titanium is a more expensive material, but the primary increase in price is the labor, especially if you have a lot of pie cuts. Each pie is cut on a horizontal bandsaw, cleaned up on a belt sander, deburred, brushed with a tube polisher, handled with gloves and carefully cleaned with acetone. Since the welding wasn't done in a chamber, Abe only does 10-12 dabs and then keeps the gas running until he's sure that everything has cooled. He spends more time cooling under gas than actually welding so the process is a lot more time consuming than stainless steel.

My small x-pipe probably has as many cuts as a simple set of headers and more welding when you consider that the OD is 3.5". Depending on how the routing goes, my guess is that I'll need 6-10x more pie cuts to integrate the mufflers. The point is if you're trying to figure out a budget, you really need to focus on the labor. 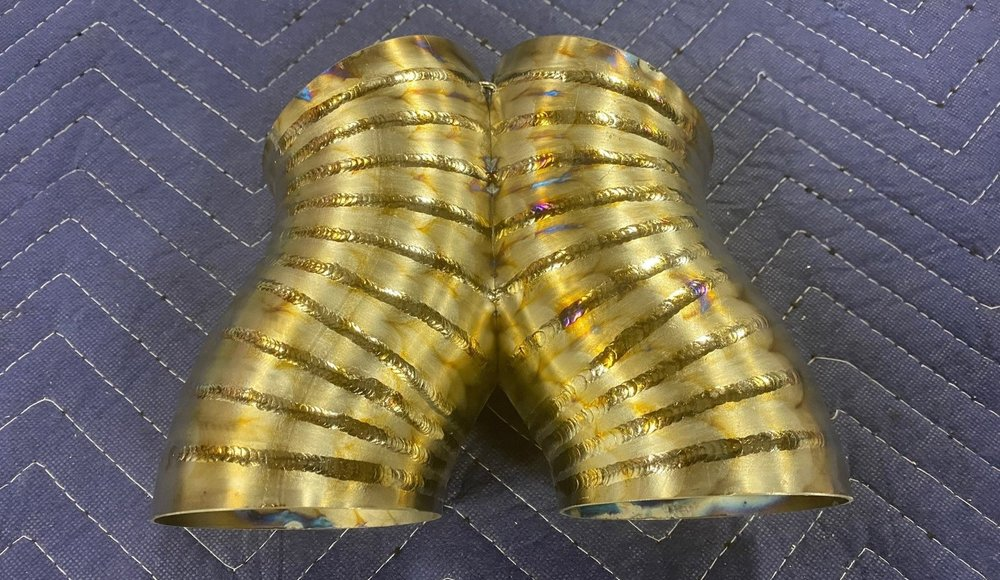 That part would be made in 4 pieces if it were done in Inconel, with each piece formed from sheet - probably just as time consuming. In fact all the F1 systems used to be made that way until Inconel tubing and specialist cnc bending became available.

The Daily Engineering dry sump pan is a piece of art. Unlike most other dry sump pans that have a multitude of scavenge lines projecting from the sides, Daily CNCs those pathways into the pan which provides a much cleaner installation. However, this results in a single large scavenge line which requires a massive scavenge filter rather than a small filter or screen on each of the protruding lines. Daily recommends a -16 400 Series filter from Peterson Fluid Systems. It’s 2-1/2” in diameter, 9-3/4” long and the -16 hose and hose ends are huge with a large bend radius. All of this makes it difficult to package the filter between the engine and the oil reservoir.

The top and bottom halves of the oil reservoir can be independently clocked which is helpful when routing hoses. However, no matter what I tried, I was unable to get any flexible hose between the filter and the tank and I settled on a solution that utilized a 45-degree union fitting that attaches the filter directly to the reservoir. The issue with that approach is that there is no flex hose to isolate the filter from the reservoir and they will vibrate at different frequencies which will eventually cause the weld on the bung in the reservoir to crack. 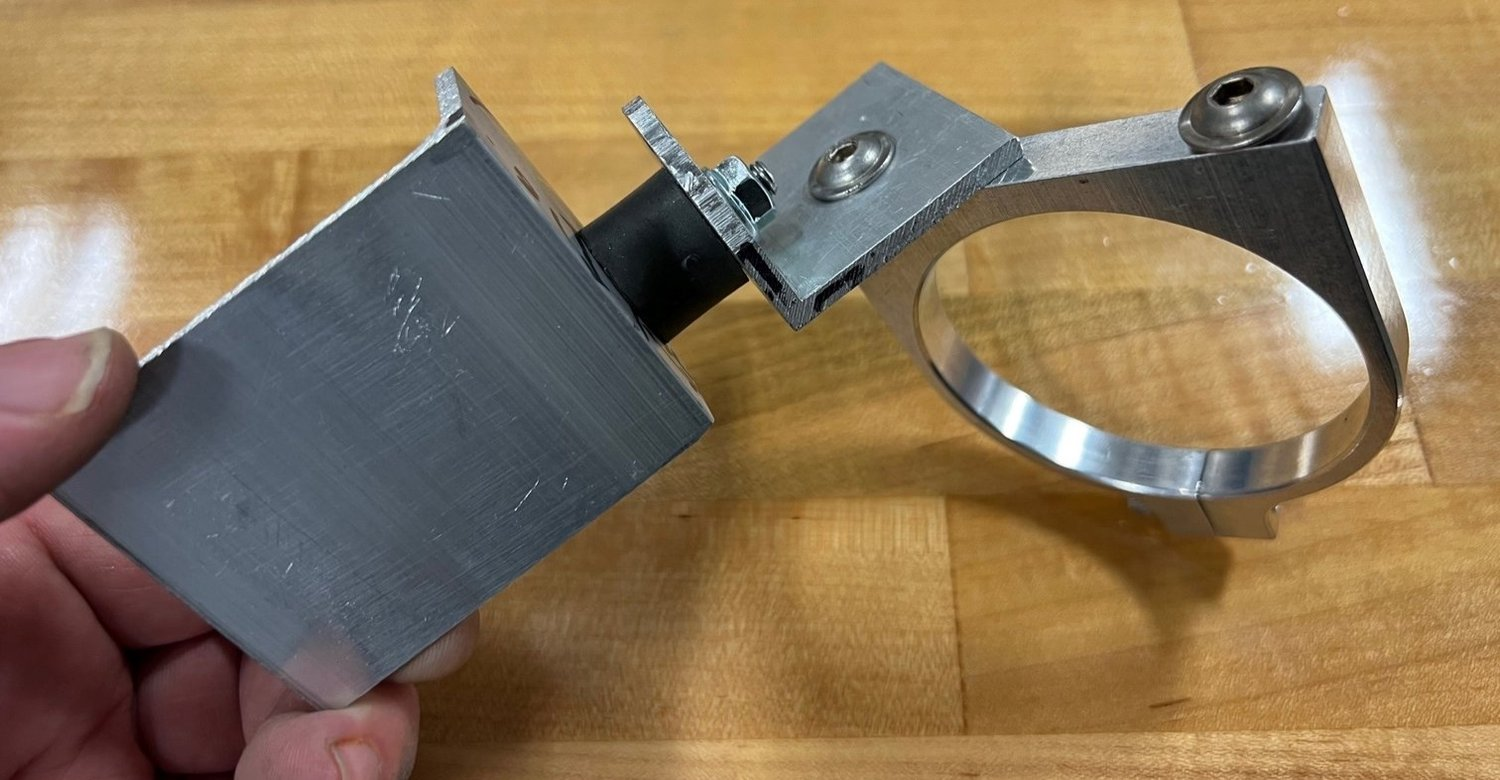 To solve that problem, I needed to fabricate a bracket to dampen filter vibrations. The challenge was that the filter and the 2”x 2” chassis tube were pointed in different directions with a compound angle between them. I purchased a panel-mount billet bracket from Peterson, but measurements and angle finding attempts between it and the chassis provided futile. I then hacked together the above “angle finding” jig with two pieces of scrap right-angle aluminum and a vibration-dampening sandwich mount. Since there is only one screw per connection it provides four axes with 360-degrees of rotation each of which was orthogonal to the adjacent axes.

Within a matter of seconds, I was able to get it perfectly aligned. Wow, that was easy! I tightened the screws to preserve the orientation and removed the bracket which made it easy to measure the angles on the bench. This allowed me to design a bracket. The single screw per connection was critical to the angle finder, but antithetical to the bracket’s purpose so it utilizes two screws per connection to prevent rotation. 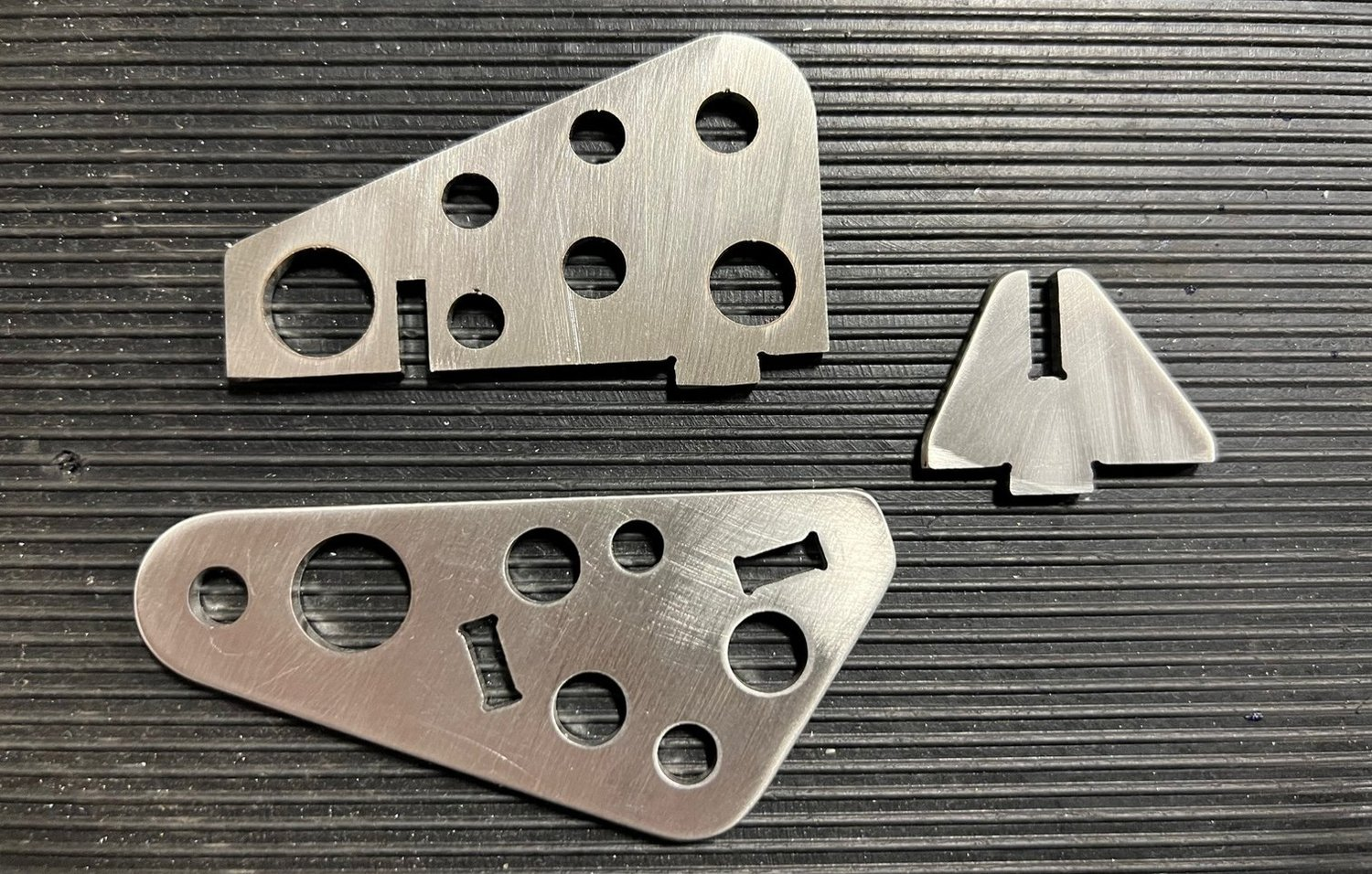 The bracket was laser cut from 1/8” stainless steel because welding small aluminum parts isn’t fun and the parts were well under the $29 order minimum. I added a couple of other parts and was still under the minimum. 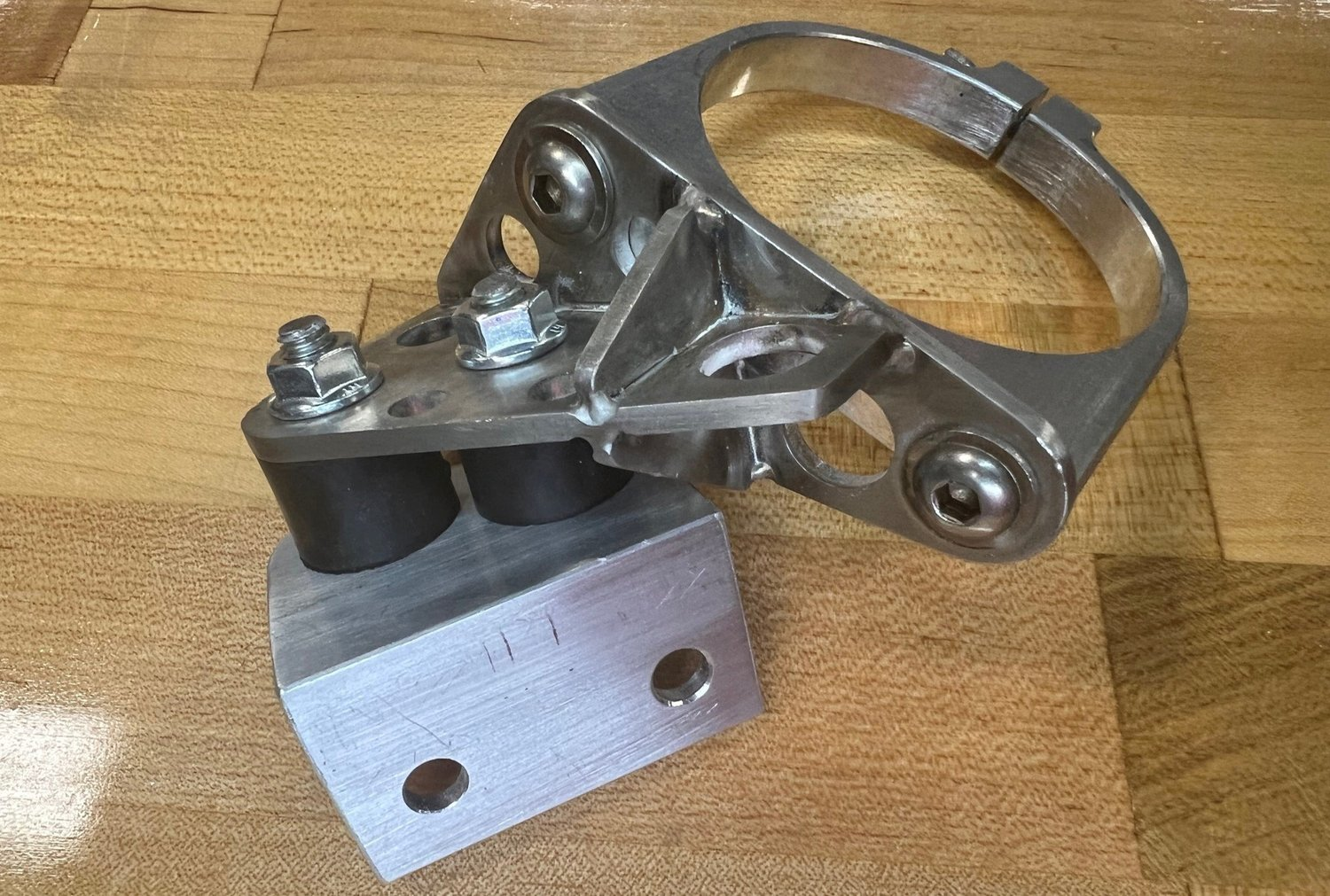 Bracket assembled and ready for installation 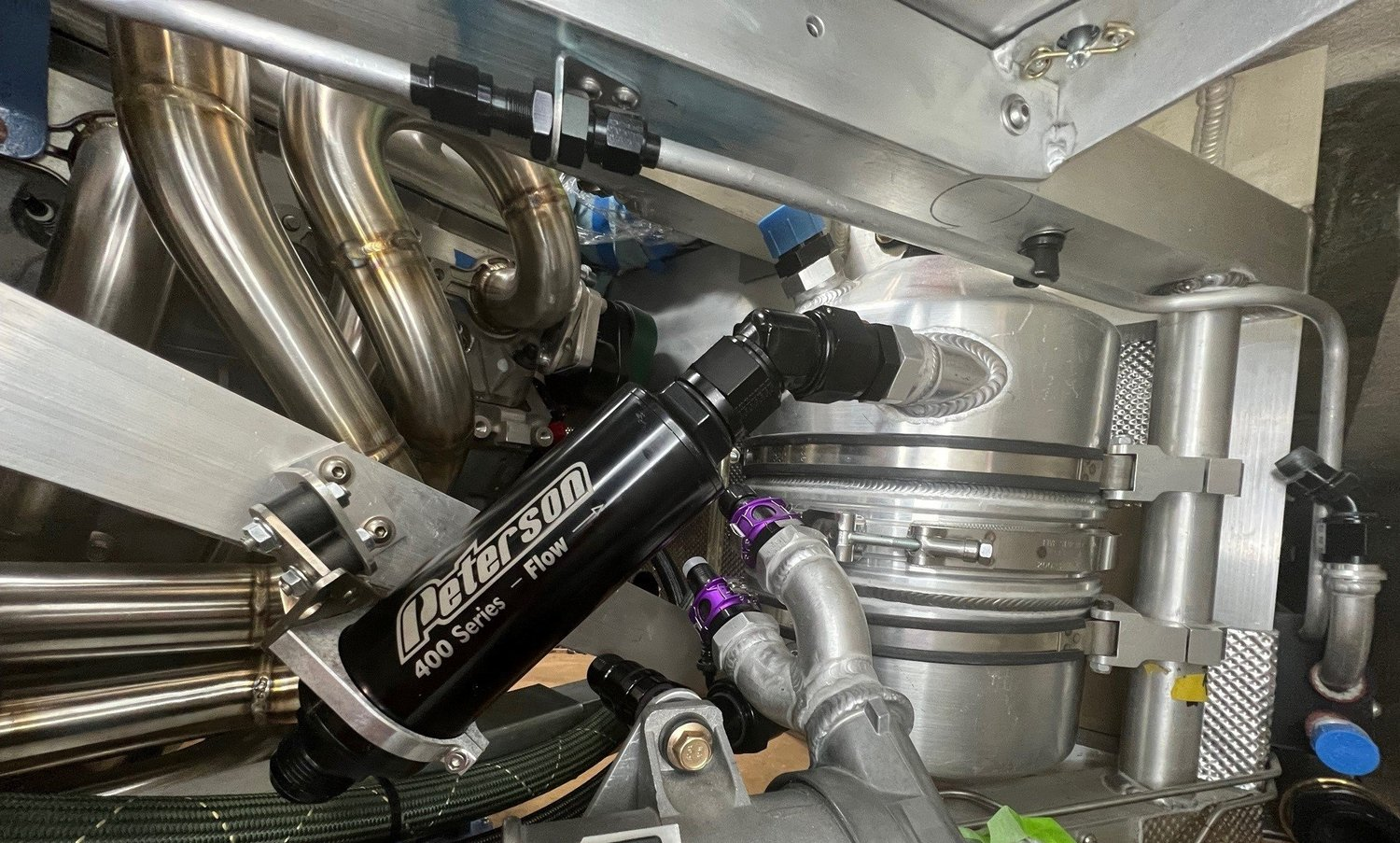 The next step is to run the -16 hose to the pump and weld a couple of gussets to the weld bung just to be safe.
B

Impressive work as usual. Are you printing your prototypes in PLA? Avoid ABS because it's harder to print and has some post-print shrinkage?

I print everything in Onyx which is a proprietary filament composed of high-quality nylon and chopped carbon fiber strands. It's not cheap, but I've never had a problem with post-print shrinkage, warping, separation from the print table, etc. In the last 5 years I think I've had two misprints and I've probably level my print bed about once per year. I'm really happy with the Mark Forged printer.
You must log in or register to reply here.
Share:
Facebook Twitter Reddit Pinterest Tumblr WhatsApp Email Link
Top