weisserheilbronn said:
Sorry in advance, I could not resist

That ole curmudgeon cracked me up! 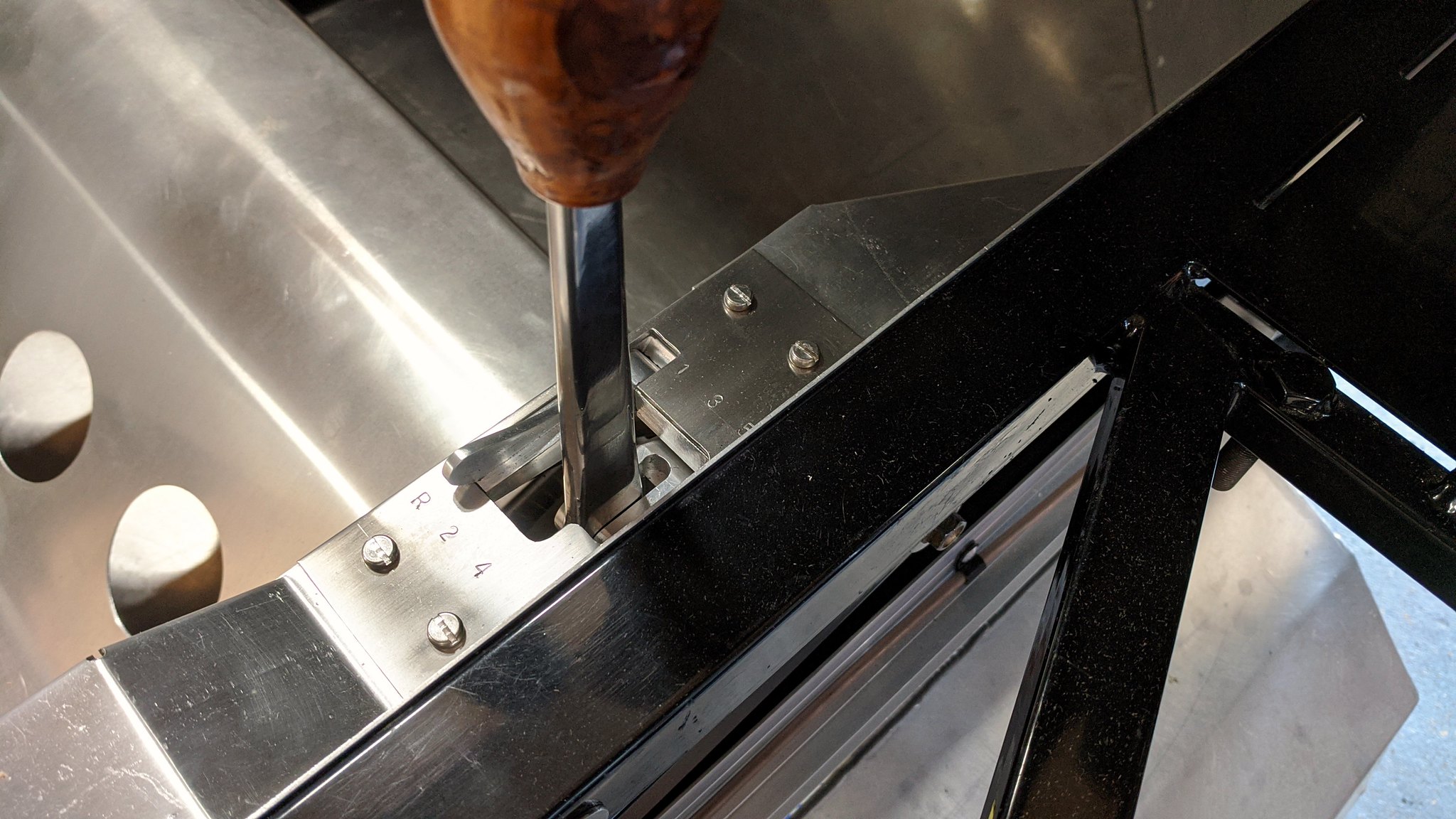 Supporter
Ah that's a job I still have to do, mind you I quite like the look of the mechanism but it will fail IVA I may make mine removable? Lookign great as always though Eddy

Shaun Sizen said:
Ah that's a job I still have to do, mind you I quite like the look of the mechanism but it will fail IVA I may make mine removable? Lookign great as always though Eddy
Click to expand...

Do you mean fail on "sharp edges"?

Supporter
Yes I think that plus exposed moving parts, just a guess but bloody everything needs shielding it seems, I meane heaven forgive of you hit your head on a dash screw that is not dome topped !!!

Supporter
I think I can make my gear lever comply:-

The lever itself is 8mm thick stainless, so the radius is 4mm - pass!

A leather gaiter will be fitted which covers the shift gate so there's no gap. I'll fit a different reverse lock-out lever which has much more rounded edges. The aluminium cover will receive padding plus leather-effect top cover. It'll double as an armrest for my right arm, while I'm cruising through France on my way to the Riviera, dahling!

My pedalbox, though not blunted, should be exempt, yes?

Supporter
I think pedal be will be fine, frankly if you head hits that there are worse things to worry about !!! I was thinking on the gear shift as to the internals of the mechanism itself, others may have more knowledge but I think it has to be covered as its a pinch trap?
N 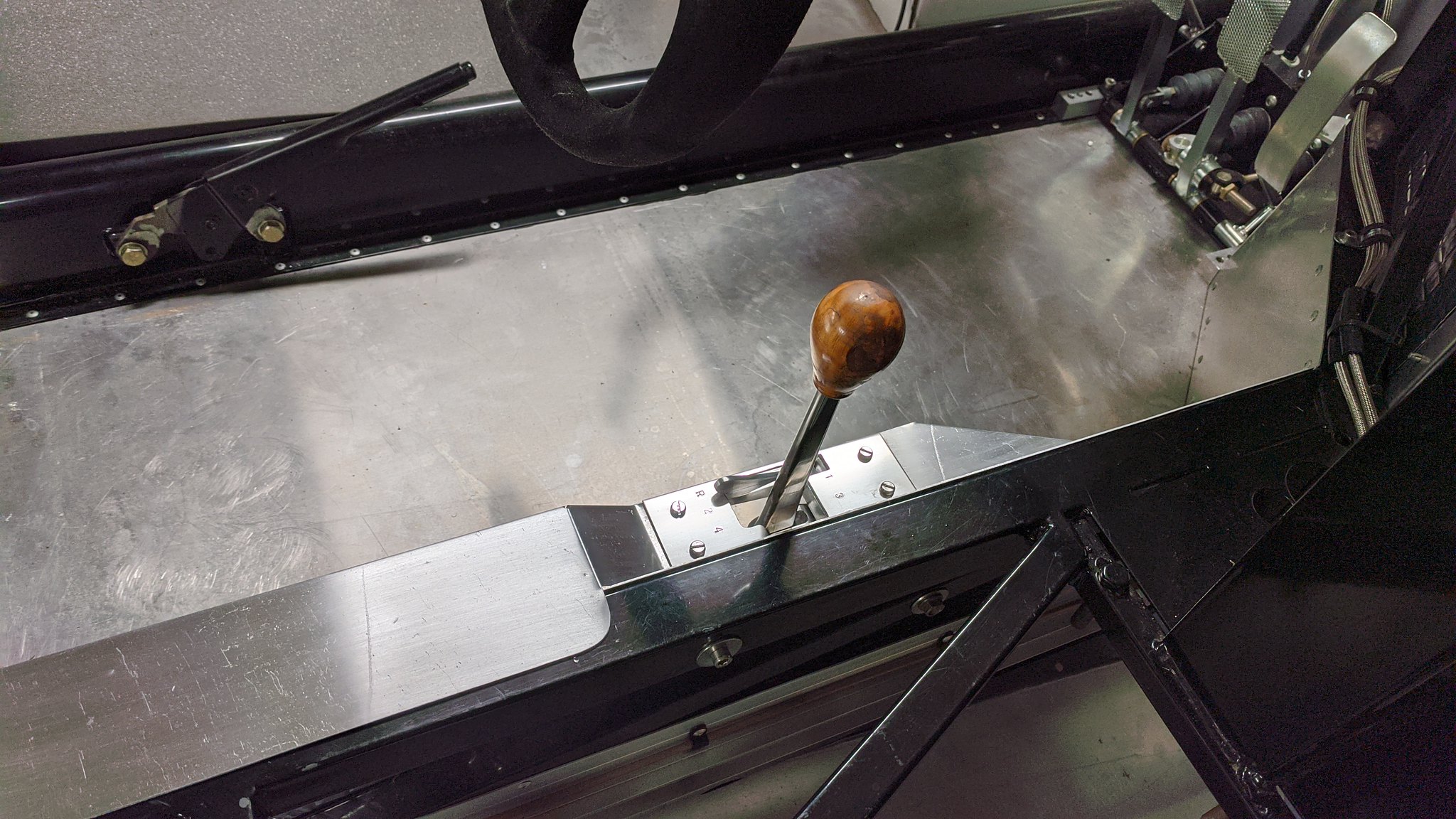 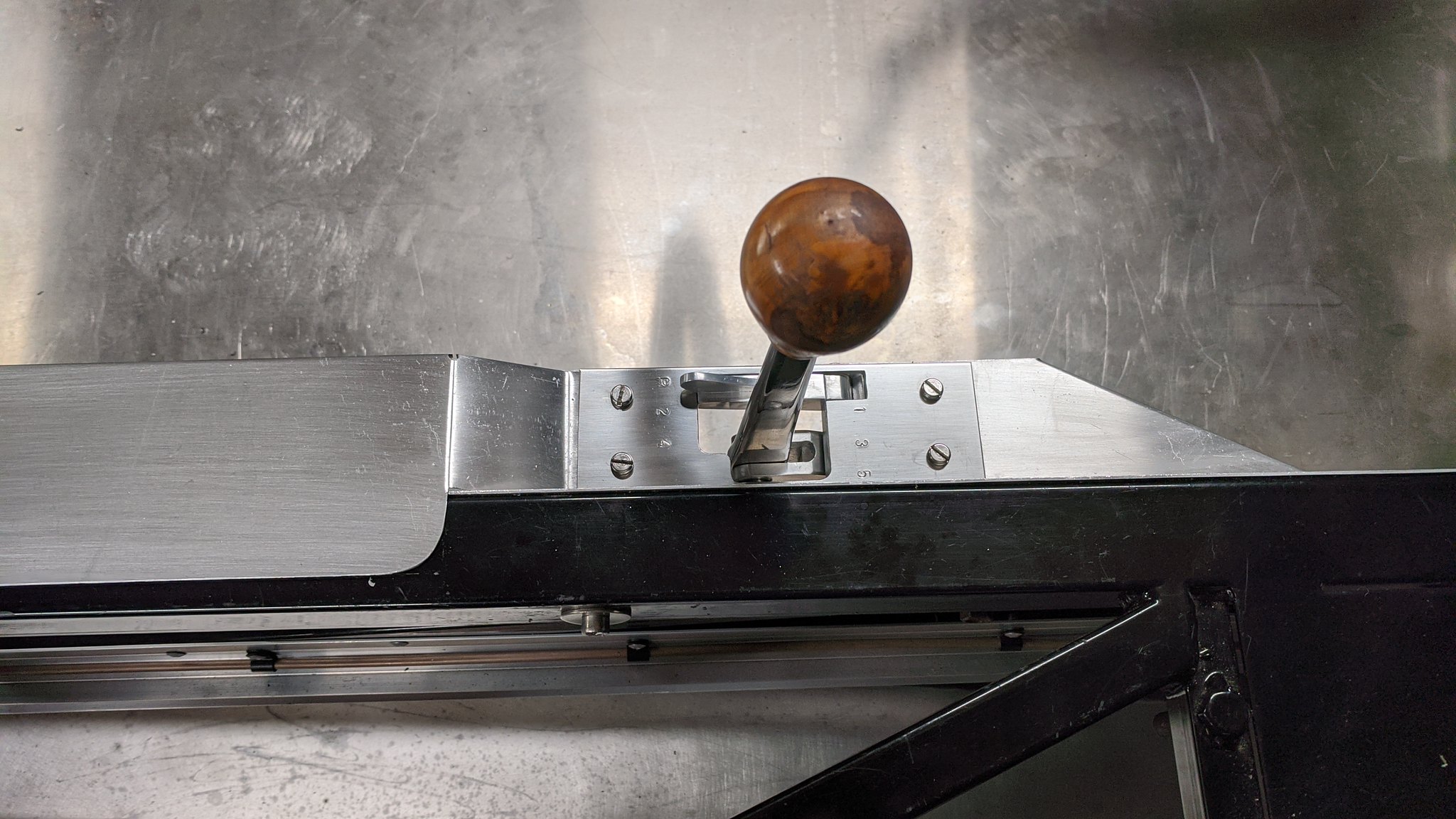 How did you get your stamped numbers to align so well, mine despite best efforts were all over the place. For what it is worth I just put some heat shrink over my gear lever and left the reverse lock out as it was for IVA, I may have just been lucky though.

Nick Brough said:
How did you get your stamped numbers to align so well, mine despite best efforts were all over the place. For what it is worth I just put some heat shrink over my gear lever and left the reverse lock out as it was for IVA, I may have just been lucky though.
Click to expand...

First of all, I lay awake for a couple of hours between 3 and 5am so I could think about how to align my stamped numbers. I do this a lot with GT40-related issues. Then I went out to the garage and measured the cut-out in the stainless steel gate top cover, and decided I needed 12mm between the numbers. I then marked-up my desired number location on the plate with a Sharpie, and drilled three 7mm holes in a plywood offcut with 12mm spacing. I placed this little jig over the plate, sighting down the holes to my marks, and drew round the jig to preserve the alignment. Then I pressed the 1, 3 & 5 stamps into the jig holes, turned it over and eyeballed the alignment and did a few test runs on some aluminium scrap. Last step was to place the jig over the plate, align the marks and use the medium-sized twatting-stick on all three punches. Then repeat with R, 2 and 4.

It would have been much easier if I'd bought a square-section set of punches, with the letters aligned to the punch face:-

But a long while ago I'd bought an el-cheapo set like this:-

with tiny hex-bits...and the numbers & letters don't align with any of the hex faces, and the spring-loaded thingamajig is as much use as a chocolate fireguard. So, I had to make the most of what I had, hence the farting-about with a ply jig.

Shaun Sizen said:
I think pedal be will be fine, frankly if you head hits that there are worse things to worry about !!! I was thinking on the gear shift as to the internals of the mechanism itself, others may have more knowledge but I think it has to be covered as its a pinch trap?
Click to expand...

I don't the inspector's hemisphere will be able to touch the internal mechanism:- 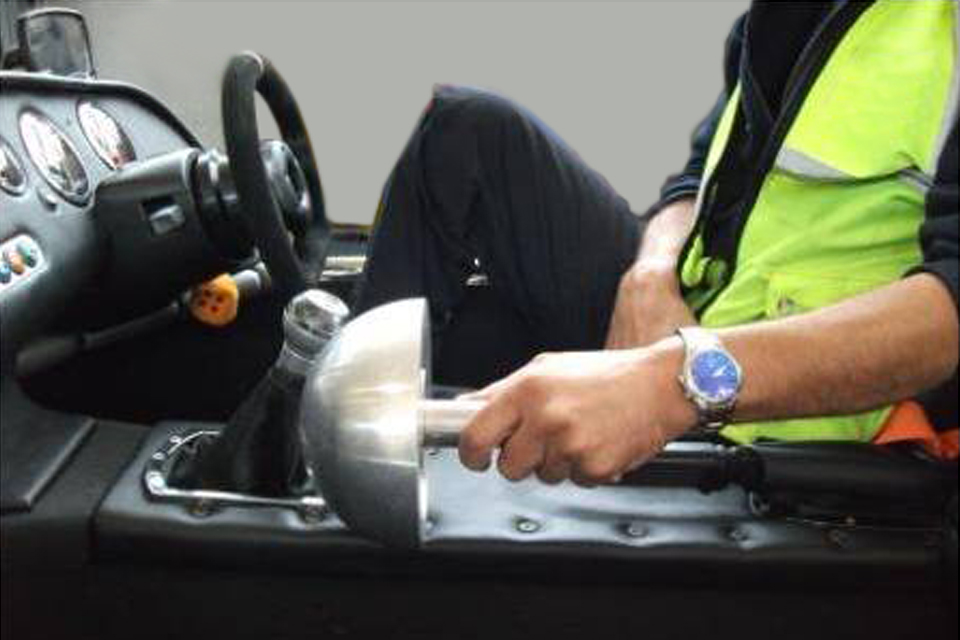 The phrase "pinch trap" doesn't appear in the 2018 IVA manual against which I'm building this car. Have you got any further information about this part of the assessment?

Where do you find such things, ive been looking for ages
N

MotorEddy said:
It would have been much easier if I'd bought a square-section set of punches, with the letters aligned to the punch face:-

Thanks very much for pointing me in the right direction, got me thinking about what you would do if had bought a set of square punches . Looks like your idea of a jig is also the answer, I have over winter to attempt the same https://www.instructables.com/Jig-for-Punching-or-Stamping-Letters-Straight/

Supporter
Not sure Eddy just thought I read it somewhere, will make the cover anyway and remove later if I like the "bare" look, first thing I need to sort is my shift rod is bent so having issues aligning the linkage, seems the nut on the end is not quite welded square so when I turn to adjust its a bit all over the place, will pop the nut off and reweld

spacecowboy37 said:
Where do you find such things, ive been looking for ages
Click to expand...

If it helps, I've been looking for 3 years, too. Check with Mark Gaskins at "Obsolete Fleet". He brings motorcycles in from the US, but has recently started adding a few engines to his containers. No affiliation, no endorsement, just another possible source.

Supporter
So this is what I have... 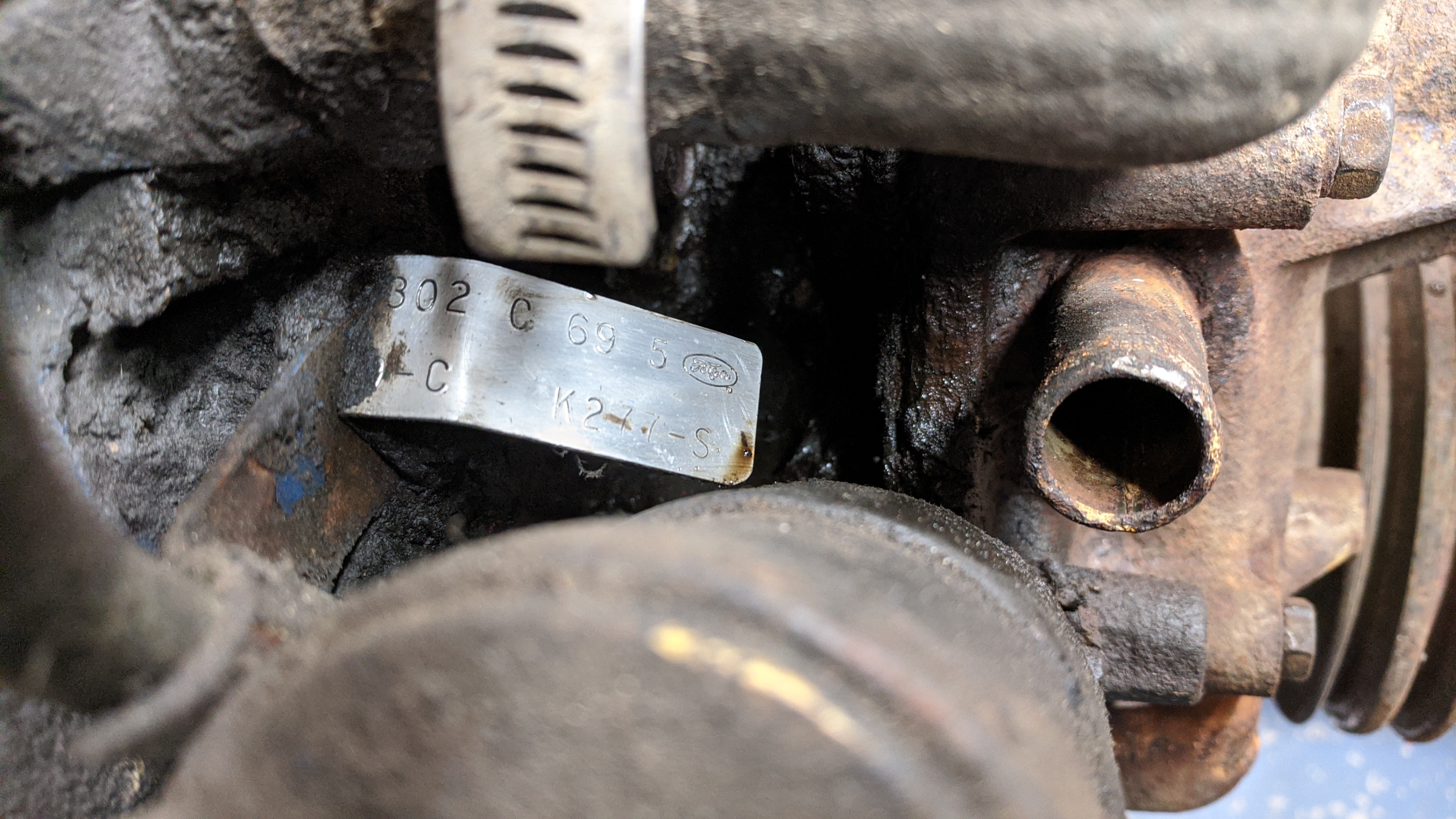 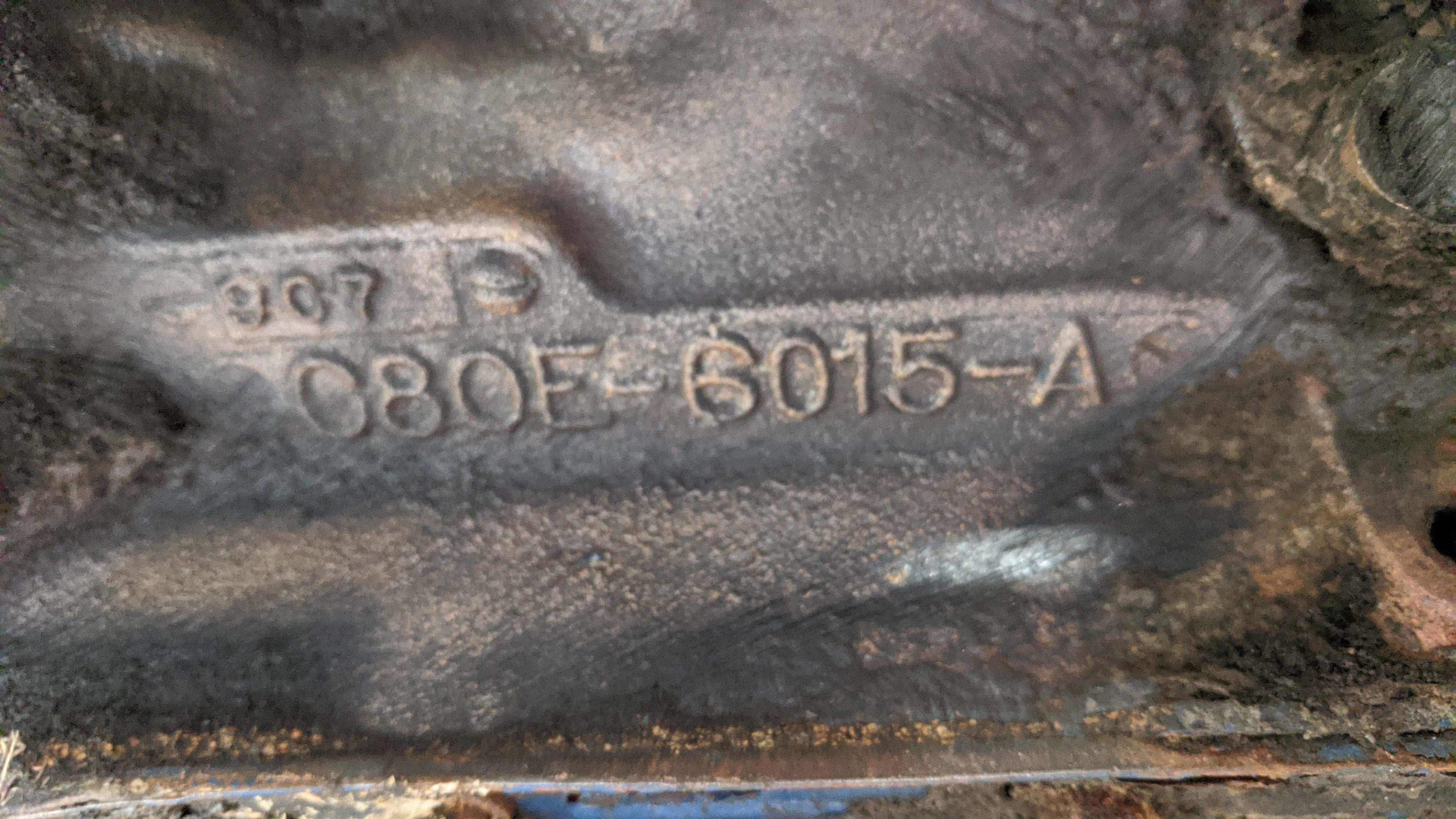 Which looks like a '68-style casting, but poured in March '69? Go easy on me if I've got this wrong! Aluminium tag is still in place, which makes me think it's not been apart, but what about these threaded gallery plugs... 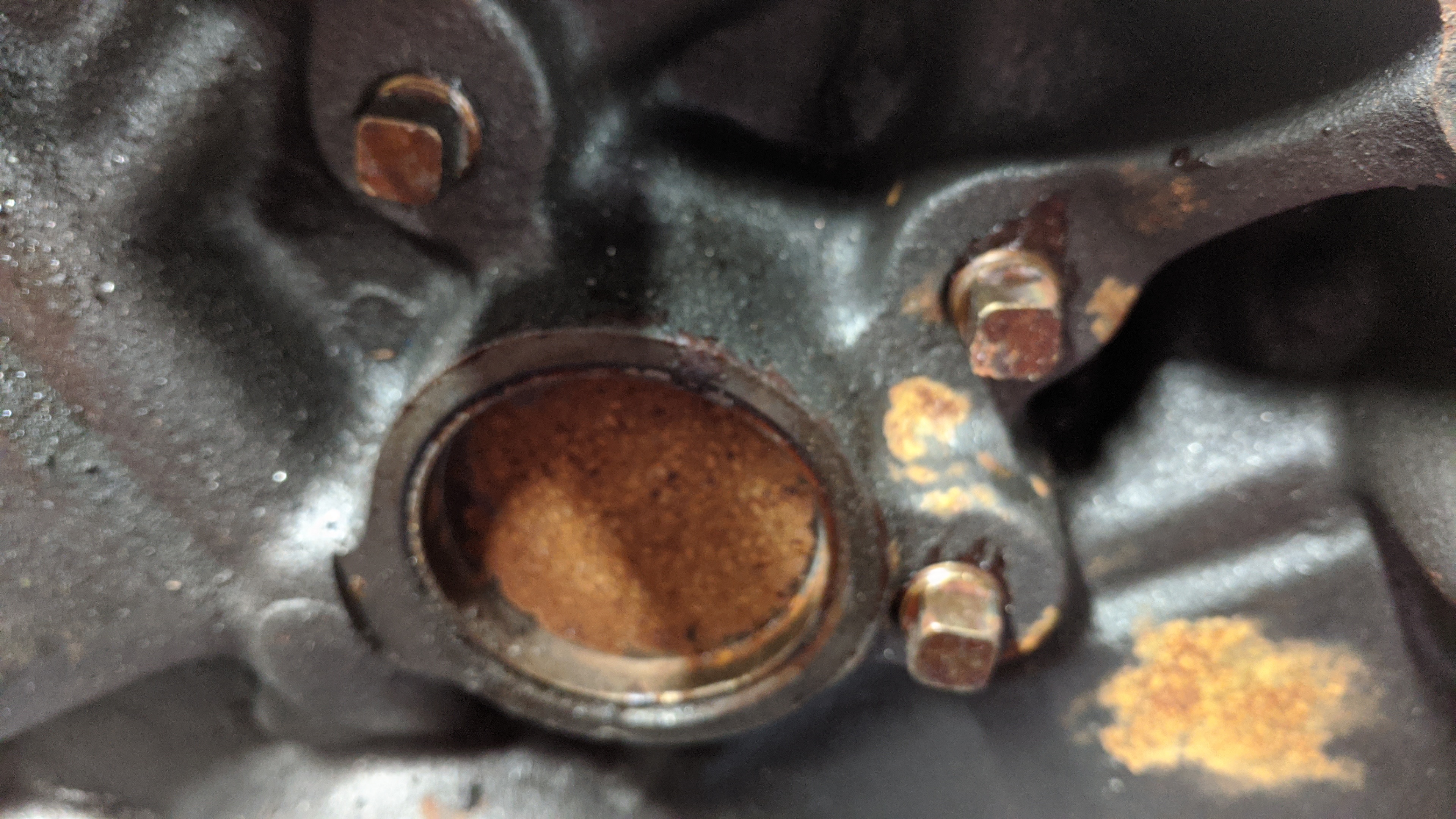 which would have been pressed-in brass(?) plugs from the factory...right?

And I think I need the beefier engine stand, having only built piddly little 4-cylinder car, and 2-cylinder motorcycle engines previously. What's the weight of an assembled Ford small block? 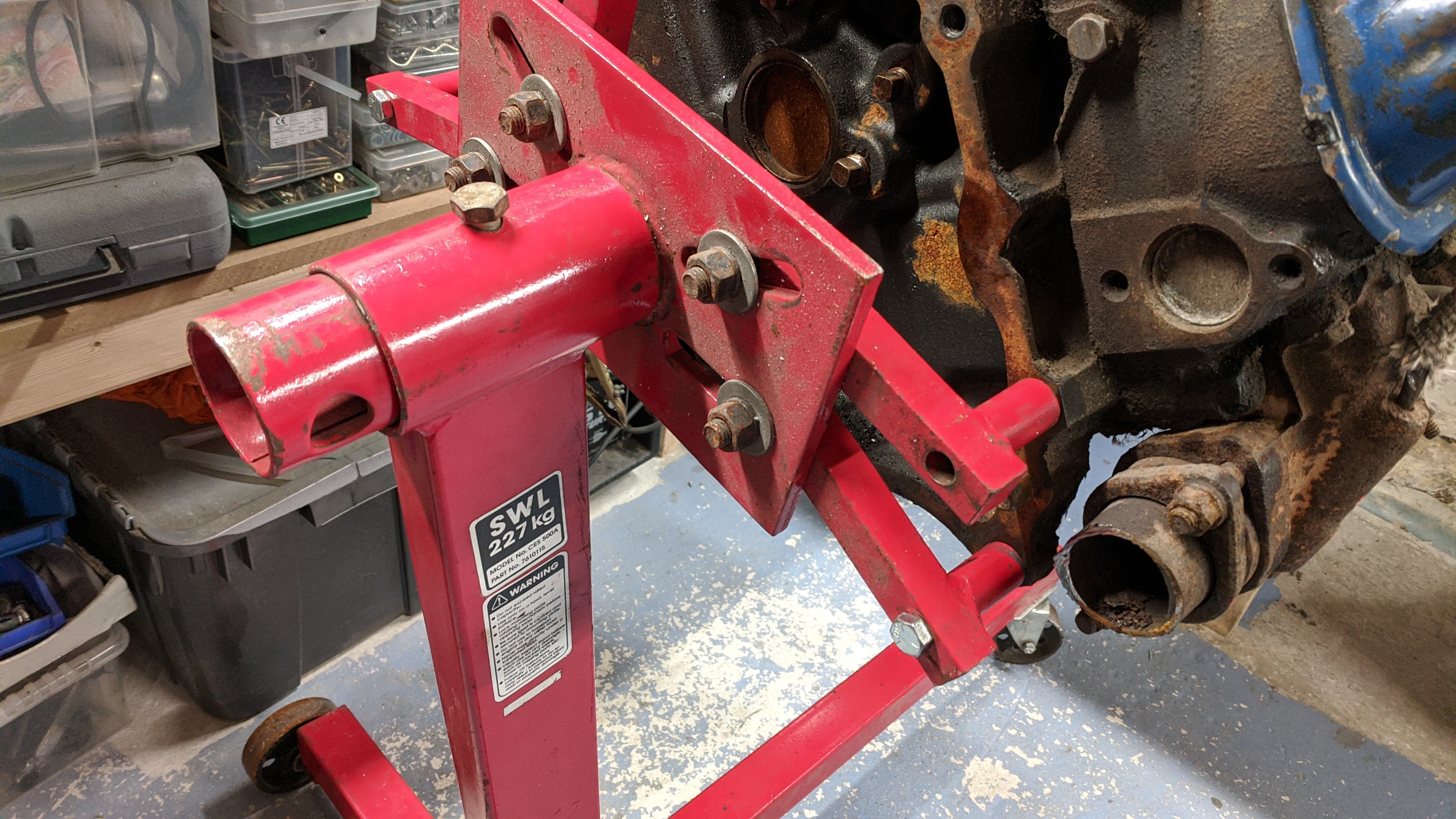 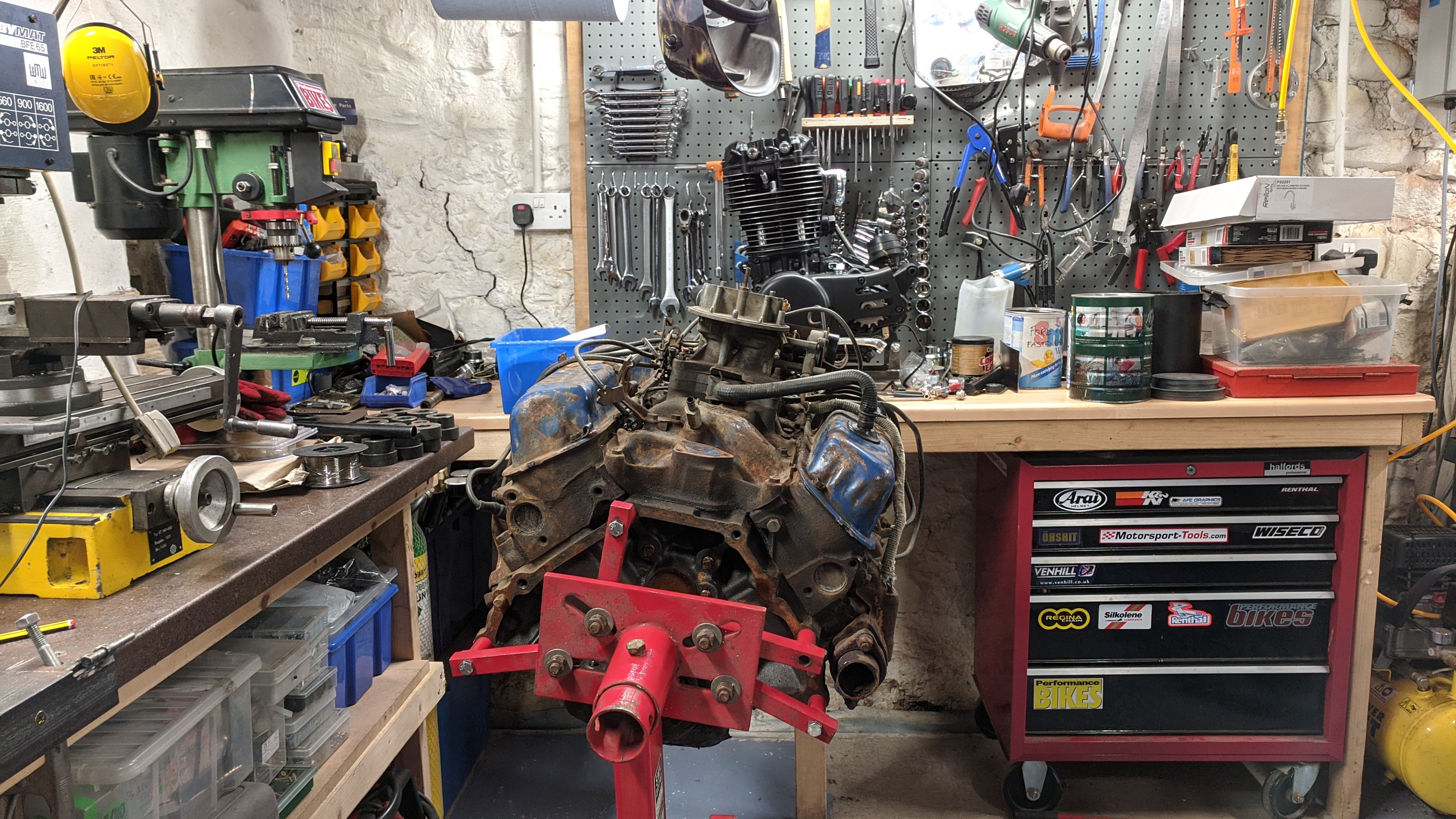 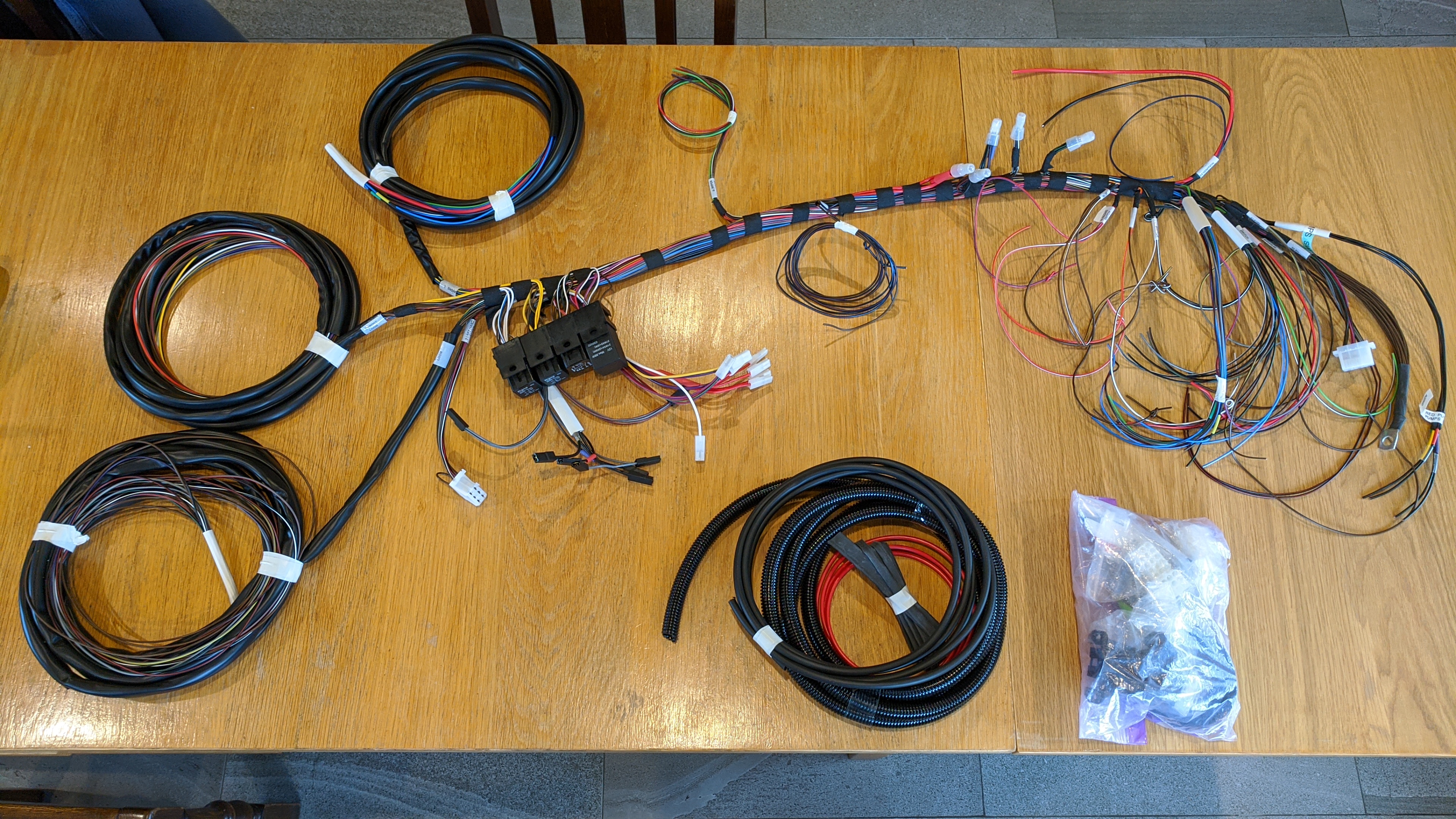 And I have started collecting the gauges - all Smiths classic black bezel. These are NOS fuel gauges as fitted to Triumph TR-series, Reliant Scimitar and others:- 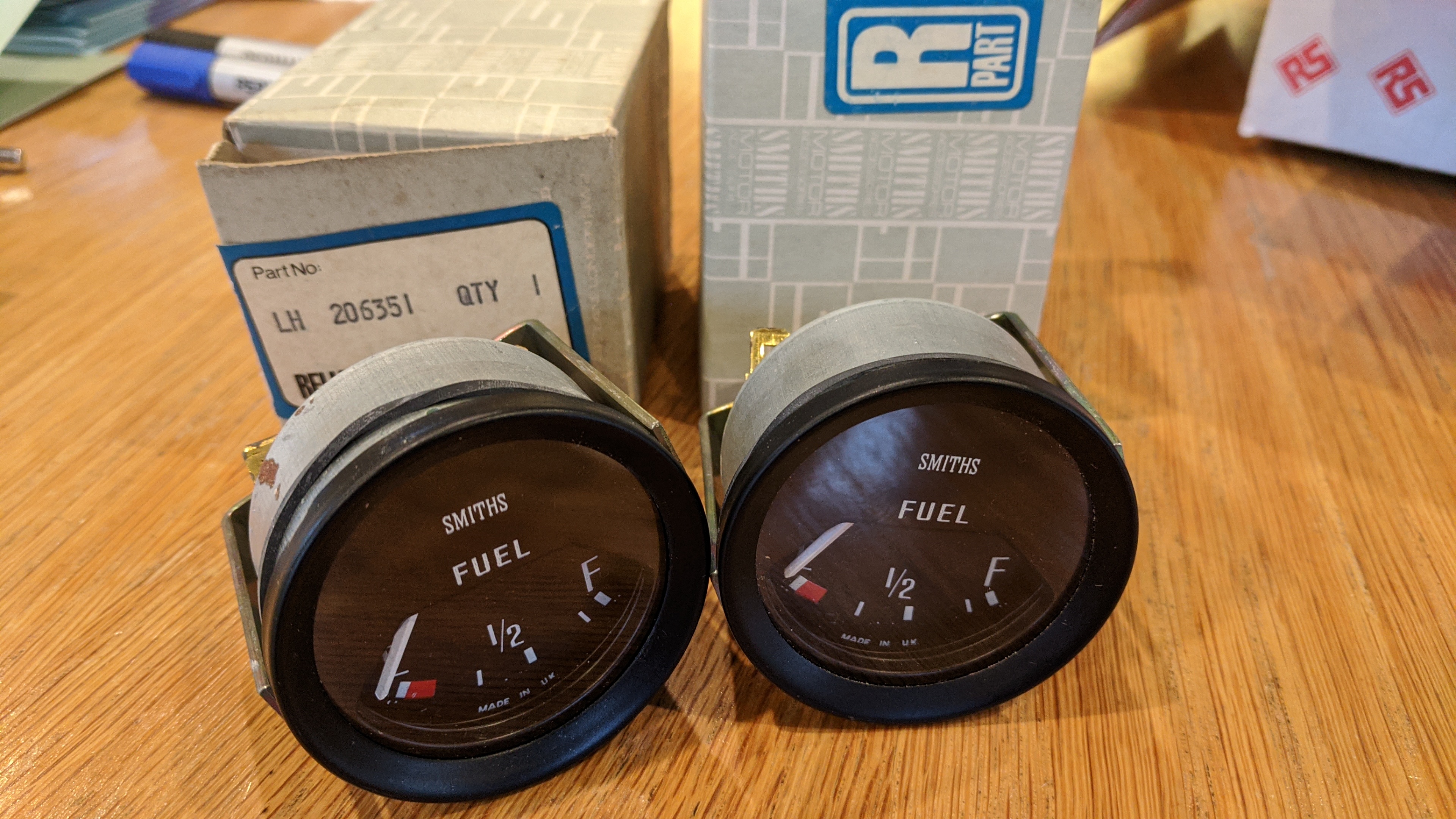 The fuel gauges and the oil & water temp gauges are slightly awkward in that they require a 10V supply, normally achieved with an odd voltage stabiliser - a little tin can containing a bimetallic strip which switches 12V off and on, averaging 10V over a long period. I think we can do better than that with a solid-state regulator IC.

I'm going to run two of these - first one will feed the fuel gauges and the second one will feed the two temperature gauges. The ICs are a bit small & fiddly, so I have re-packaged them into an old relay body and I'll add an extra relay socket so that I can wire them into the loom. 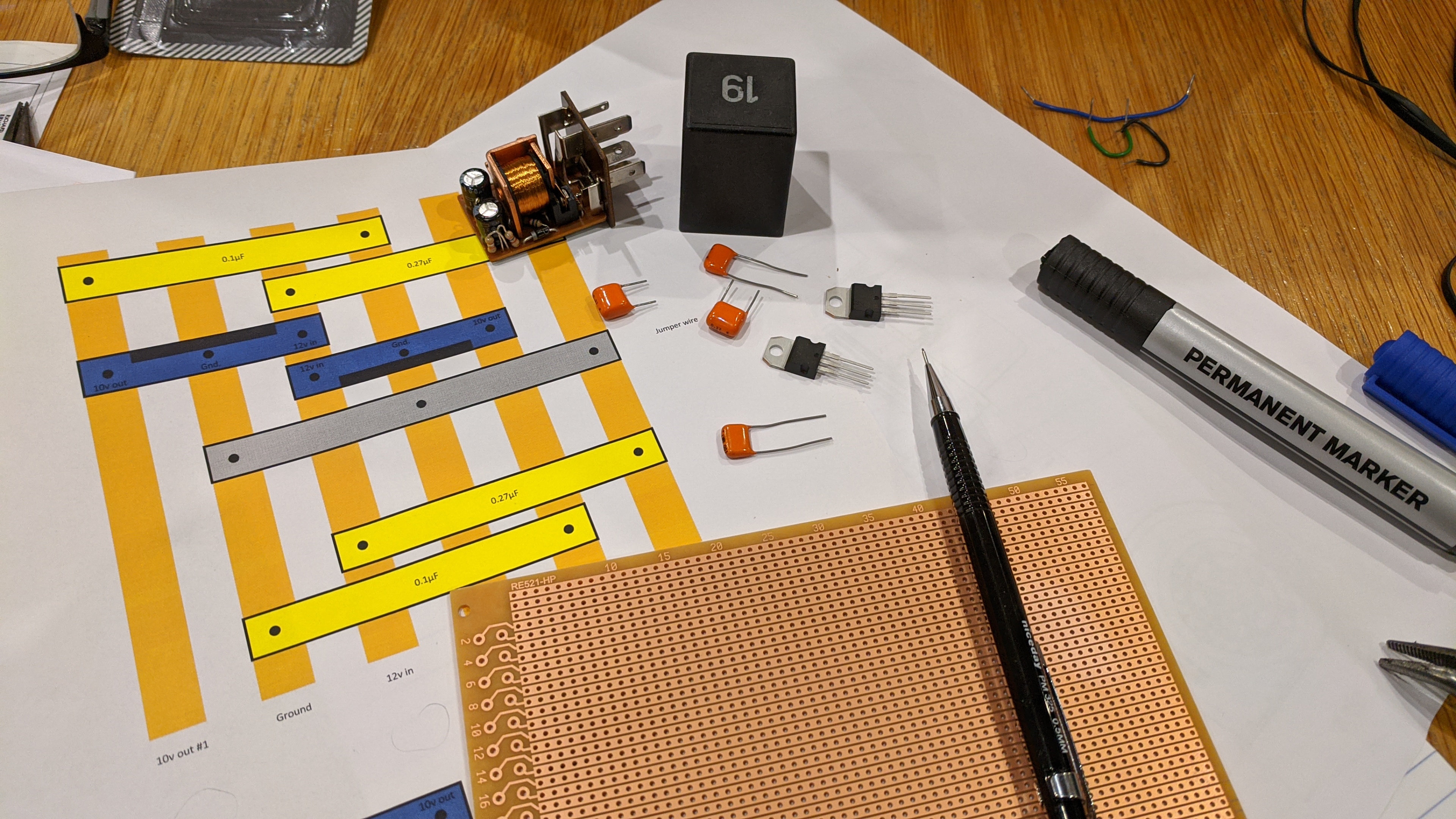 Adding some capacitors as per the 7810 sample circuit, gutting the relay and cutting up the relay PCB with a Dremel 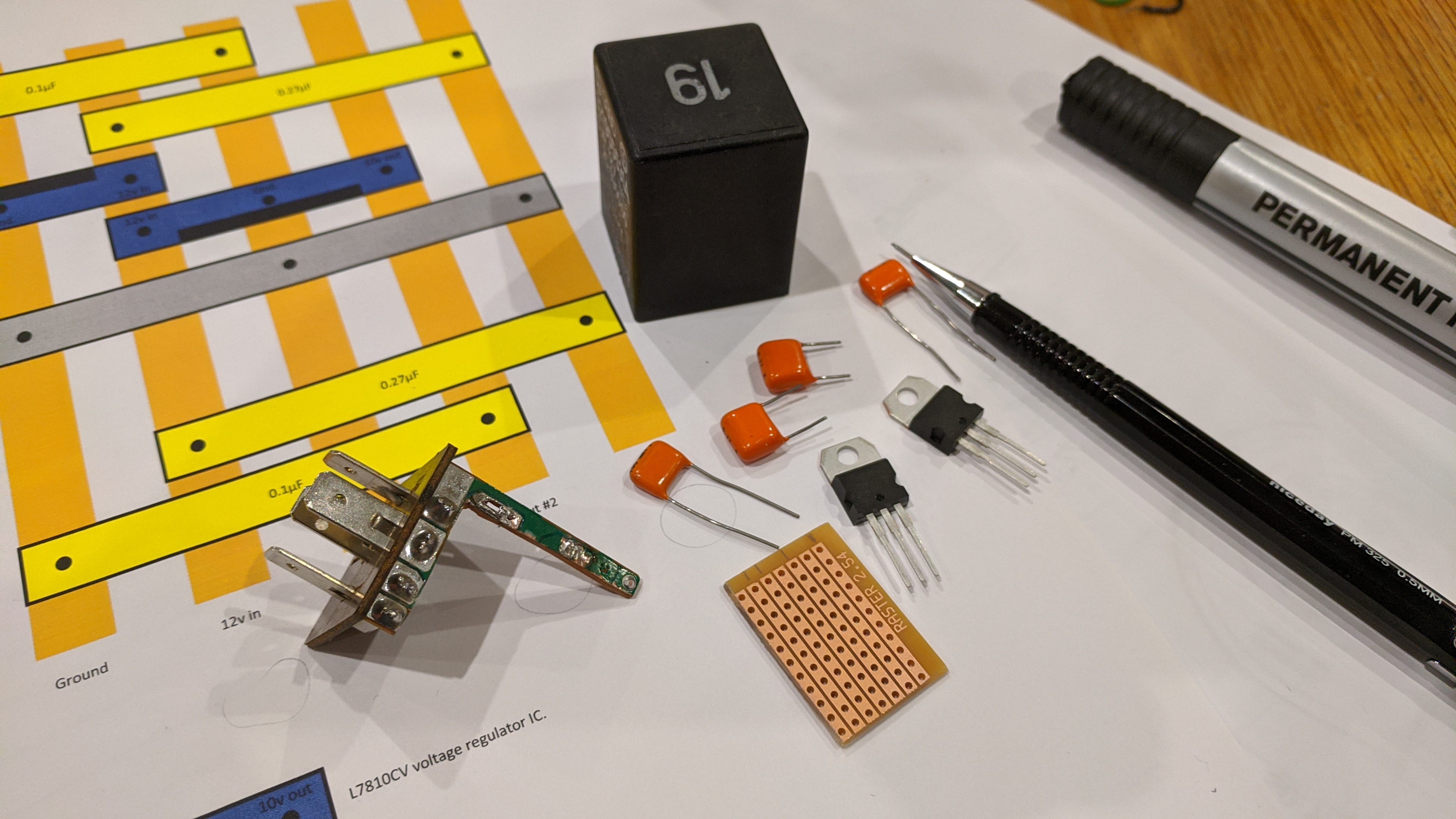 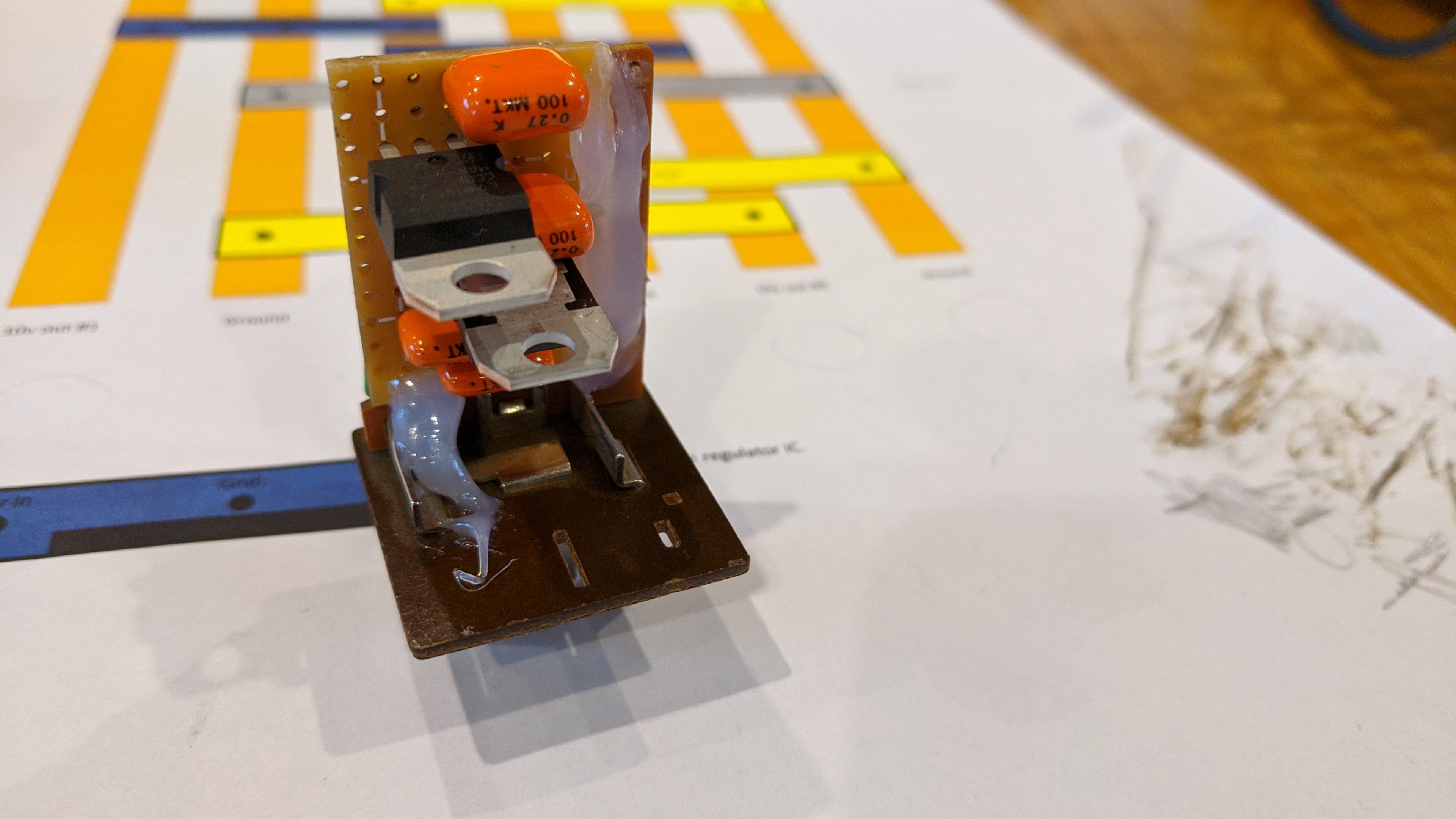 Looks a bit messy; I re-did it after this photo was taken. The veroboard tracks are only a couple mm wide, and I need a smaller soldering iron tip! This is my first foray into electronics - last soldering I did was a propane lamp and some 3/4" copper plumbing fittings when I rebuilt a bathroom. 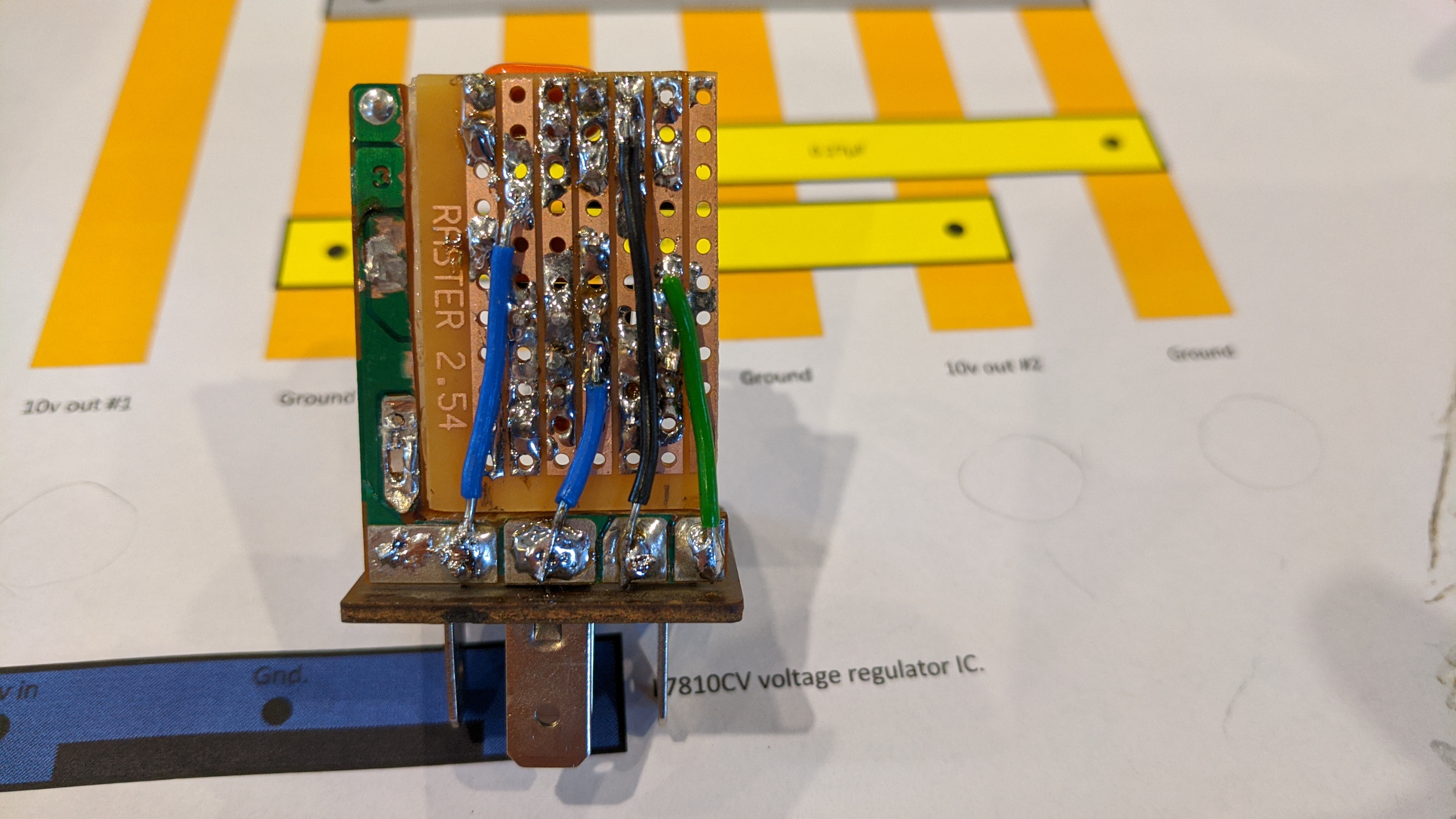 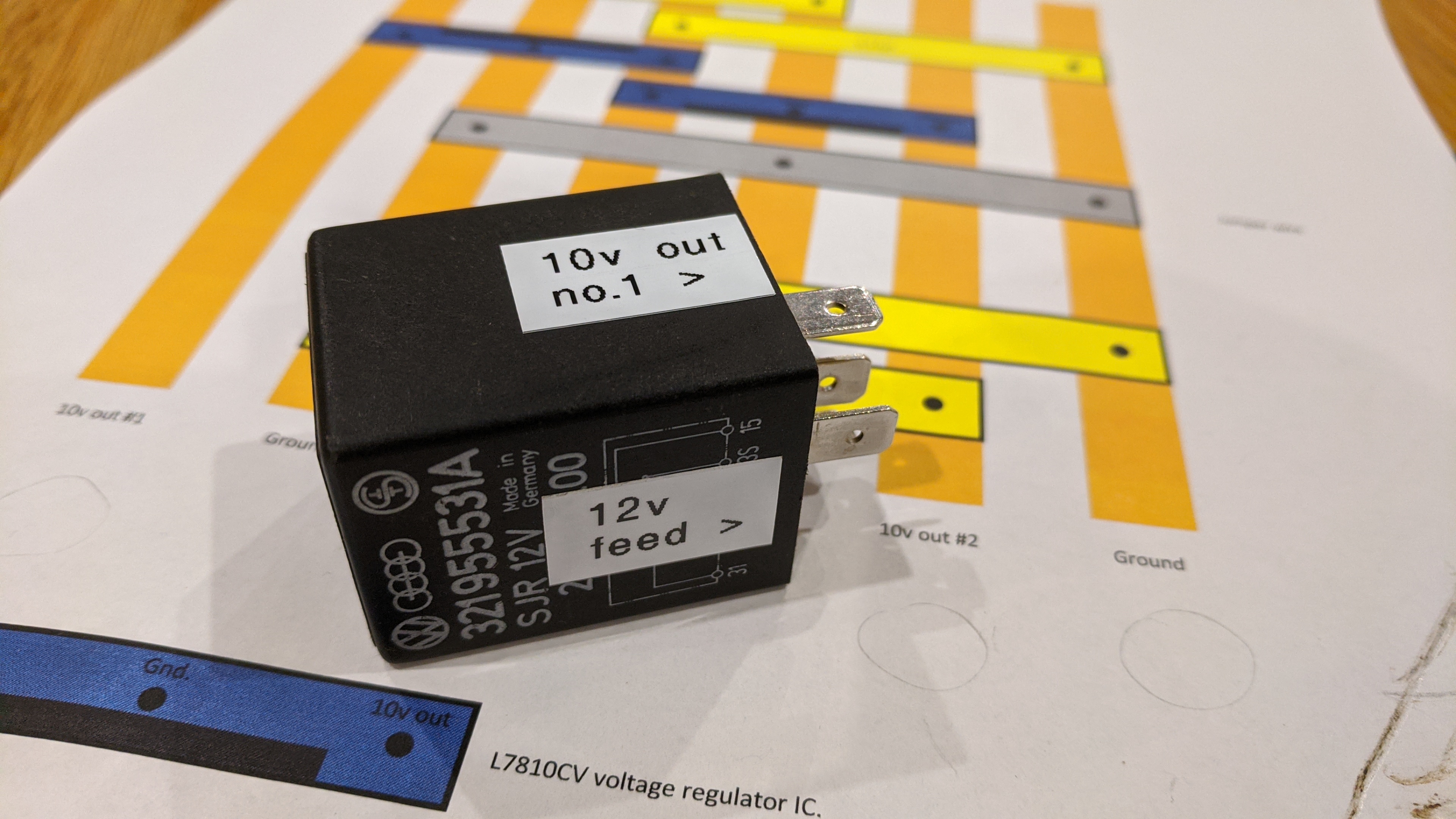 Supporter
The voltage regulator is a good way to go to get a stable 10v. Check to see how hot they get with the current they will take when connected to the gauges and sensors. If needed bolt on a heatsink to them. Lots available commercially or just use an ally plate.
A fine tip soldering iron would be a good idea. A good idea is to clean the veroboard just before you do the soldering as the copper surface gets an coating of oxide quite quickly. I use an abrasive rubber which is like a normal eraser but has a mild abrasive embedded in it. Otherwise some fine wet and dry will do the trick.
Cheers
Mike

Thanks for the tips. I was using a little Antex soldering iron with a small tip, but I think I could have gone smaller yet. The veroboard was brand-new out of the cellophane just before I used it. I did wonder about the likely current draw and possible heat - these ICs are rated at 1.5A out, and the gauges draw (I think) about 100mA. There are these styles of TO220-packaged heatsinks on Farnells:-

and I could always remove the relay case and install one - will keep an eye on heat output when I hook it all up for testing. Need some senders first. Got one fuel level sender, which I'm modifying to fit so that its full-to-empty travel perfectly matches the 7 inch depth. 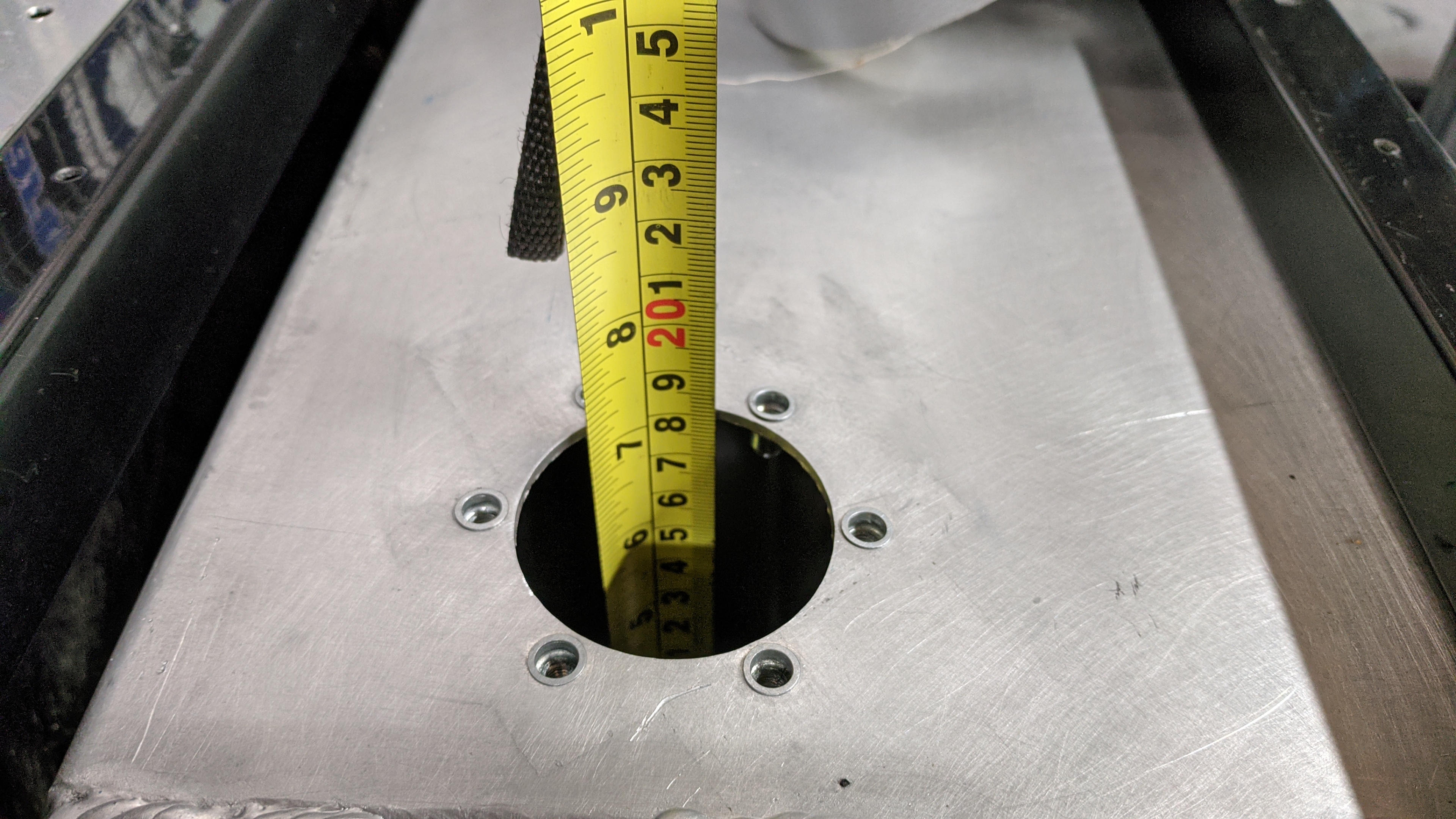 I knew I should have emailed you beforehand...is there anything you don't know?!

I also got some hints and part from my brother @ Syncrosport - http://syncrosport.com/

He builds harnesses and dash systems for VW Transporters and derivatives, allowing MFA dashboards and extended functions (mileage, mutiple trip meters, tanks range, distance-to-empty and so on) to be grafted into older vehicles. He also does conversion harnesses to allow, for example, Subaru engines to be fitted and talk nicely to the vehicle systems.