Supporter
Got your attention? I hope so!

PUT A FIRE SYSTEM IN YOUR CAR!!! It only cost a few hundred dollars and it will save a $100K worth of car! You don't want to be the guy standing on the side of the highway waving his arms and running around in circles while his $100,000 fiberglass cars burns to the ground. 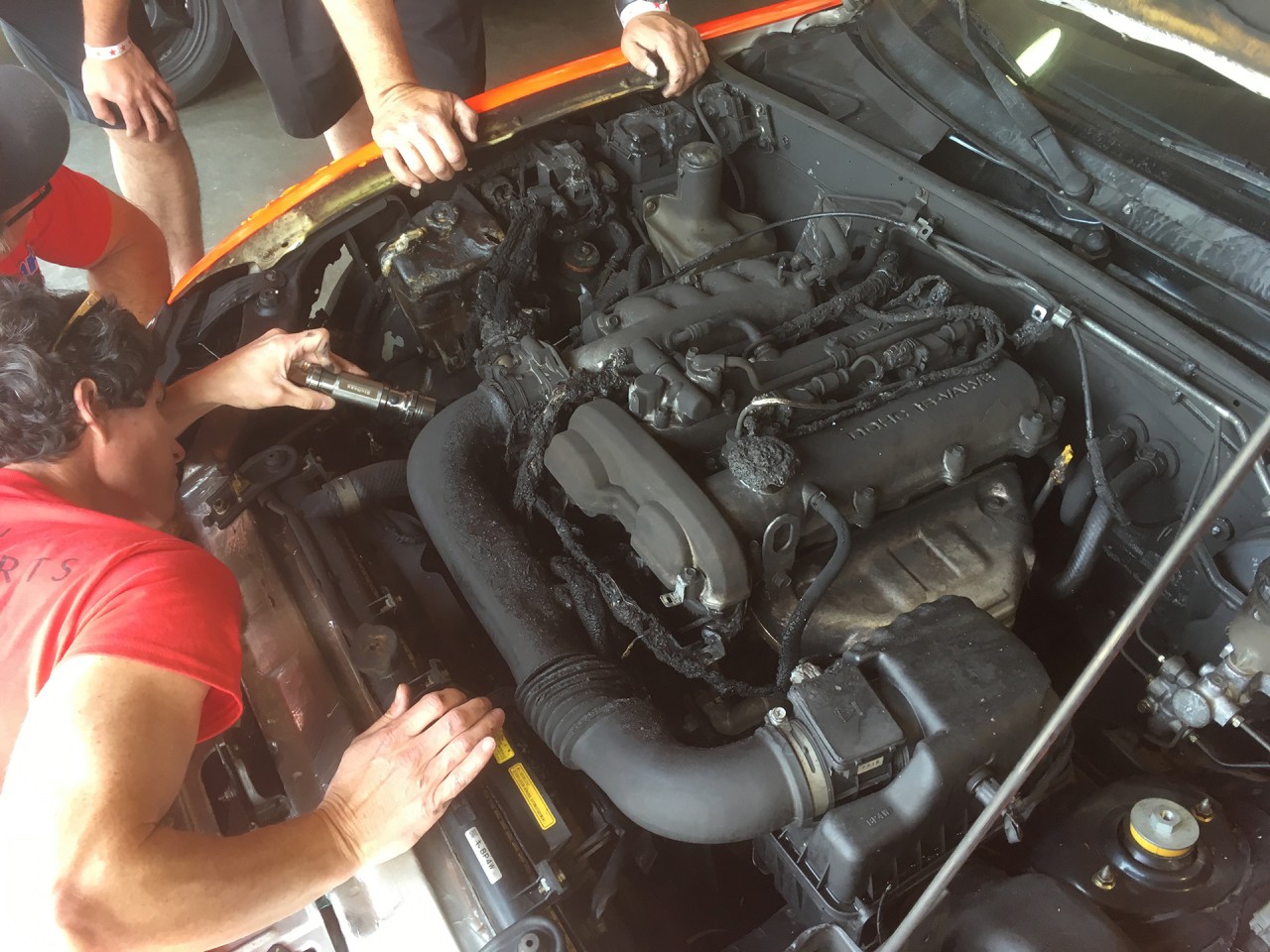 As he rounded the last complex of corners that lead onto the front straightaway, a fire ignited under the hood of his Spec Miata. The driver followed the rules to the letter. He pulled over, evacuated and stepped away from the car and waited for the emergency crews to arrive. The problem was...

Speaking of fire and a whole lot of other things...did you see Sunday's F1 race? If not, watch the first lap.
A whole lot to be unpacked in that 60 seconds or so.

Howard Jones said:
Got your attention? I hope so!

PUT A FIRE SYSTEM IN YOUR CAR!!! It only cost a few hundred dollars and it will save a $100K worth of car! You don't want to be the guy standing on the side of the highway waving his arms and running around in circles while his $100,000 fiberglass cars burns to the ground.
Click to expand...

Most on board fire systems are sufficient to allow the driver to exit the vehicle and have the luxury of watching the $100K car burn to the ground from outside rather than from inside it!
L

Lifetime Supporter
'Same is true for having multiple fire extinguishers in your home, Guys...at least one in/near the garage, kitchen and furnace rooms.
D

Supporter
You have to wonder when you see folks with new super cars burnt, why they couldn’t spend $300 on a fire system. I have done a couple of fire schools thru vintage racing and it is impressive how composites reignite once they get to a certain temp. So catching a fire quickly in a composite vehicle is an elevated priority. I keep at a minimum A small Haltron extinguisher in all my antique cars as it leaves no residue. 10 & 15lb CO2 bottles at each corner of the garage. Again no residue there and will chill a beer in an emergency.

The most common and devastating fires I saw in vintage racing involved Webber side drafts and the banjo bolt backing out. The damage is magnified with the ABC chemical affecting everything.

Supporter
A small low-pressure leak like a carb fitting going loose and starting a fire on top of the engine can be put out with an onboard system and save the car. Even a high-pressure system like FI can leak small amounts that will ignite. A five pounder (10 is better but bigger) modern non-residue system will put out nearly any small fire in the engine room if you act quickly.

When I go to the track I always ask where the fire bottles are. Which corner marshal stations have them. Then during the first session, I am thinking about where they are and how to drive closest to them. Proper planning prevents piss pore performances !!!!!!

Pullover, turn the car off (the reason for a master switch) to stop the fuel pump and disconnect the entire electrical system, pull the fire system. What the alternative? Throw dirt on it?

Dry chemical handheld ?..................well I think we all know better than that. Better than dirt but not by much.
Now a 2.5 lb portable non-residue, in addition, to put out a very small carb fire and save the onboard system for when it's really needed is a good idea.

davidmgbv8 said:
You have to wonder when you see folks with new super cars burnt, why they couldn’t spend $300 on a fire system.
Click to expand...

They have money and insurance. They would prefer a replacement car instead of a repaired car with a history of fire damage. In our hobby, we have more of an attachment to our individual cars, so I agree fire suppression is something to strongly consider.

Supporter
I had a Porsche 911 burn up on the street. In a rear-engine car you are the last one to know that you are on fire.

Supporter
Here for the metric people: roughly equivalent to a 5lb system I believe?

This system is legal for NASA racing!

For the rest of us: 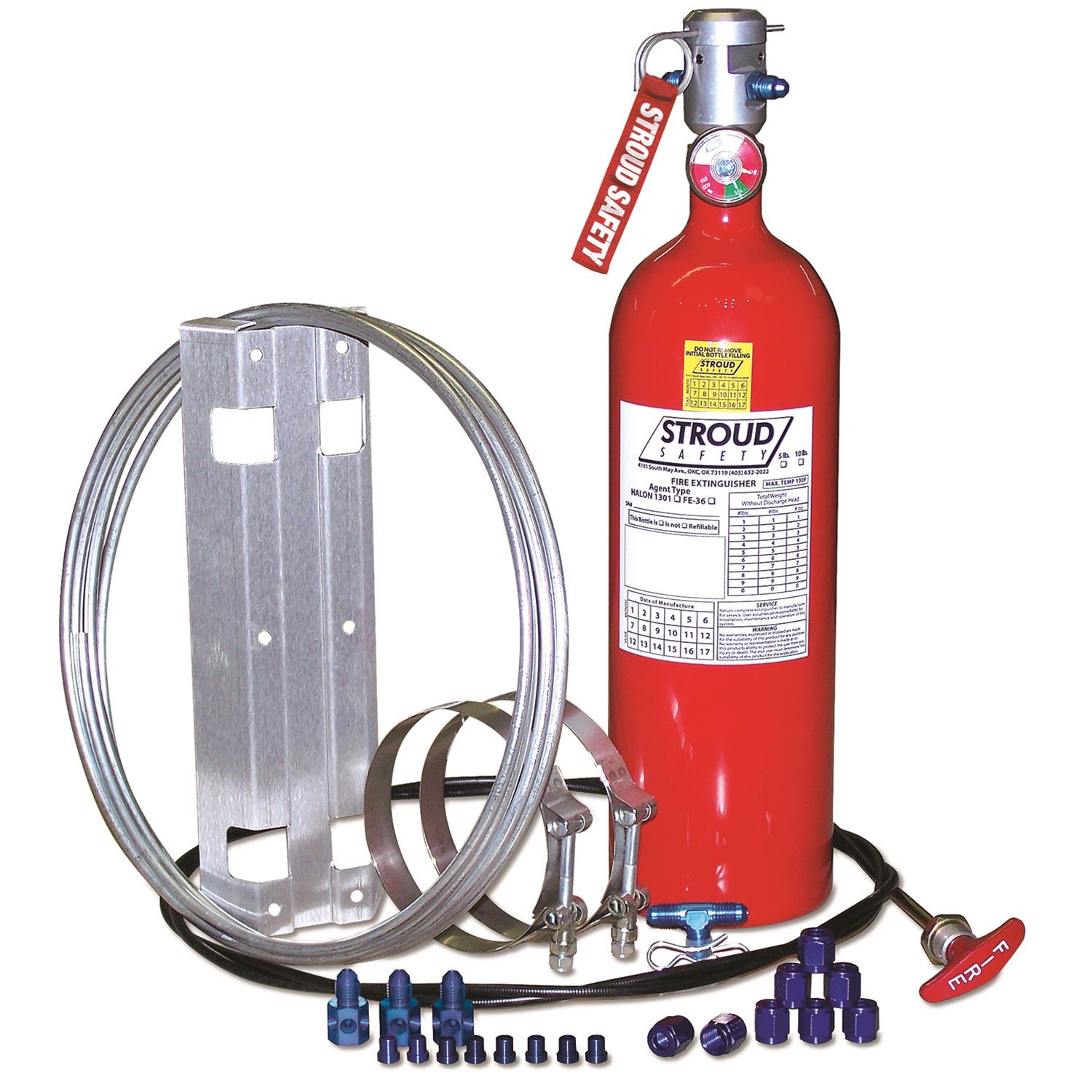 Lifetime Supporter
I echo every sentiment expressed on this item. I have used one CO2 at my home when small log fire (cedar and pine) became a large fire and started burning the cypresses in the hedges. I have a water, powder, and CO2 on each landing and in my car I have an electrically operated 7.5 Halon system with 5 kg directed around the Webbers and 2.5 inside the car. I know Halon is quite awful but it's still the best there is IMHO.
The car is being reworked on at the moment and I expect it to come home next week. I am shit scared of fire. I joined the RAF when there were still lots of survivors from WW2. with atrocious facial burns along with burns to the hands. I've been in two fires - one in my family home and one in the hotel in Manchester. Smoke is the big killer. Anyway, I hope to avoid anything kike that but I recall my next door neighbour at our last house. He couldn't start is BMW motorcycle so went to work in his car. The from of the house was soon ablaze and my daughters boyfriend (at the time ) used three of my own extinguishers trying to tackle the base. There were two elderly parents and two children still in the house. Anyway, to cut it to a short story, the woman next door refused to pay the bill for the extinguishers used. What a fucking tart.
C

Some years ago I had the pleasure of watching my mercedes S600 V12 twin turbo burn up right in my driveway after coming home from a long drive. I had a fire extinguisher but thought "do I really want this car after it has had a fire? Even a modestly small fire that I put out? Not really." It burnt right down to the ground.

At that rate, I either have to buy a finished one and THEN spend years doing it over my way or just give up the hobby. I'm not ready for that.

I think I'd rather put it out and fix it than start over. If it gets too involved, I guess I can always just stand back and make a video.

Is there any ultraviolet or infrared sensors that can auto set the system off? In mid- or rear engined cars you are the last one to know you are on fire.

Yes, there are sensors like that. I have one from Kidde Aerospace that uses dual-wavelength sensing to detect petroleum fires by the scintillation of the flames. Look at Walter Kidde Aerospace website, there may be some information on that technology there.
C

Interestingly Graviner fire detection systems were fitted by JWA to their cars in period and Graviner merged with Kidde to form Kidde Graviner later on.
S

kiddetechnologies.com
Neil, is this similar to what you are using? If so, where are you mounting it?

This is the fire detector that I have. I have not mounted it yet but it will be installed in a round hole in my Inconel firewall, looking at the driver's side header area. Its field of view should cover most of the important places. I have two 10lb automatic Halon fire bottles covering both sides of the engine in case a fire breaks out.

Supporter
Great suggestions here and thanks Tom for the link to Kidde Technologies. Put in the best you can afford but at the very least a driver accessible master battey switch and cockpit mounted small fire extinguisher is essential.
You must log in or register to reply here.
Share:
Facebook Twitter Reddit Pinterest Tumblr WhatsApp Email Link
Top