Currently got the McLaren M1B replica under a sheet at the back of the shed and working on my Dad’s car – now mine since he has gone into care. It’s a 1957 Wolseley 6/90 series 2. These things had a 2.6L BMC C series and 4 speed box with right hand gear change and were not bad performers in their day.

We’ve had it since 1970 and when I was four I thought it was the fastest and coolest car in the galaxy. Here’s a few photos of my Mum, Dad and Sister from back when we got it.

Last winter I took a bag of tools on the plane and went down to Alexandra to Mum’s place to wake it up from 20 years storage in the shed. After two days of changing fluids, un-seizing stuff, and synchronising and tuning the twin SUs I deemed it good to go and drove it 1,000km over the Lewis Pass in the snow, onto the Ferry, and home to Wellington.

Apart from the erratic SU fuel pump (who would have thought!?) it never missed a beat, and on the Marlborough straights the old girl pulled an indicated ton – I was hanging on I can tell you. The trip was one of the most memorable I’ve ever done – all the smells and sounds from my childhood and what we were doing at the time as a family came flooding back.

Here’s a photo of Mum and I in Alex just before I headed off, and at the top of the Lindis Pass between Cromwell and Omarama.

I always intended to keep the car but I need something with grunt that handles and stops OK, so I had already made plans to do a resto-mod on the car. It is very sound with minimal rust and a separate chassis that is very beefy. Despite that, it is not that heavy by modern standards - around 1470kg.

Once in Wellington I offered the complete drivetrain and suspension to the local branch of the Wolseley Car Club if they put a posse together to bone the car out over a weekend. They agreed and were excellent. Here are a few photos of the car after they were done.

Work is going well. I am putting Jaguar brakes and suspension at both ends. The front end has been braced so it keeps dimensionally stable when the existing front rails are cut-off and re-fabricated, and a frame to carry the Jag powerlock diff and suspension is being fitted between the rear rails. I have a new LS3 with a cam upgrade and a TKO600 5 speed ready to slot in. The LS3 weighs no more than the C-series. New inner guards will also be fabricated.

I haven’t told my old man what I’m doing to his car yet – I’ll take him for a drive when it’s done! In many ways it is my tribute to him. I plan to keep it looking externally stock, and I will be buried in it.

I’ll post the odd update as work progresses. Have a great weekend!

That is a great project Andrew, can't wait to see it progress.
Regards, Udo.
K

Pics of Lindis bring back memories

Thought you would have sneaked a Big block in there somehow

Hope all is well with you

Yep nice part of the country for sure. Don't know if you've been through there lately but the strip between Omarama and Twizel is now irrigated with centre-pivots and full of dairy conversions - not the right place for that I reckon.

Bit narrow for a big block, and not enough space for big rubber at the back to hold one anyway!

Hope all is well.

Progress update. Unfortunately when the new site went live my photo albums got nuked so any of my previous posts that had photos in them are now blank. Anyway, things are going slowly but well.

The Jag IRS is now in. The braking system is now a GM hydro-boost with all the hardware under the floor and out of sight. Front seats from a BMW 135 coupe are a perfect ox-blood red colour match and fit almost perfectly onto the original bolt holes in the floor. The entire front of the car has been cut off. A new front chassis made and grafted in. The LS3 has had a cam and valve spring upgrade and is now in. The transmission tunnel swallowed the TKO600 with minimal mods, and the engine set-back and height is good. We are now starting the stainless headers, which will require a slight relocation of the lower end of the steering column.

The wheels are 17x7 off a VW Transporter Van and have the high positive offset needed to get the Jag suspension under this narrower bodywork. At the rear we are giving them an extra inch of width on the inside to get bigger rubber on. The wheels have been modified to suit the Jag hubs and have pins to accept the original Wolseley stainless hubcaps. The wheels will be powdercoated black. We are aiming for maximum stealth.

Once all the engine plumbing and wiring has been done, the front end sheetmetal will be clearanced for the wider engine and refitted to the new chassis along with the new radiator, front guards and brightwork. There is still heaps to detailed stuff to do. Some photos below.

me and Mum 2017, leaving the storage unit where it had been sitting for 20 years, ready to drive it from Alexandra to Wellington

top of the Lindis Pass on the way home

waiting for the Wellington ferry

Mate, you've always loved a sleeper. This has history to boot. We need to catch-up.
Cheers
Mac
R

Andrew, I take it that its still going to be road registered, How have you found the LVVTA process given the extensive mods.
Regards
Russell
A

Mac's40 said:
Mate, you've always loved a sleeper. This has history to boot. We need to catch-up.
Cheers
Mac
Click to expand...

Hi Mac, yeah will be great to catch up and see progress on the '40. Cheers, Robbo
A

russell keach said:
Andrew, I take it that its still going to be road registered, How have you found the LVVTA process given the extensive mods.
Regards
Russell
Click to expand...

I bought the LVVTA car constructor manual, and have been doing my best to follow that. Because I am using entire sub assemblies with OEM parts for the front and rear end, the suspension/brakes/diff side of things is pretty straight forward. The biggest mod in terms of engineering is the removal of the front section of the old chassis rails and the fabrication of the new rails, and to a lesser extent the crossmember that carries the Jag diff/IRS.

By limiting the front rail surgery to the last metre or so, I avoid falling into the scratch-built category, and I have a very talented fabrication chap doing that bit. And there is standard guidance for installation of the Jag IRS that I have followed. We are being conservative in terms of materials and joins, using the fabrication guidelines for scratch build hot rods. I am planning to use Andy Smith in Levin for cert - https://www.smithautos.co.nz/. I have used him before and he takes a practical and sensible approach.

Hi all, short update. Exhaust system completed from headers back. Jag IRS has been in for a while - just finishing off handbrake cable and other bits and pieces. Fresh underseal on back half of the car. Steel wheels (which will be powdercoated black and fitted with original hubcaps) are 17x8 with large backspacing off a VW transporter with a 1 inch band on the inside - biggest tyre that fits is 225/65/17, shown here on full compression - 2mm clearance on inside and outside. Hamish - my master fabricator - is making slow progress on the custom headers and them we can refit and modify all the front panelwork around the LS3. Hope all is well! Cheers, Andrew

Hi all, slowly plodding along.

Been doing sheet metal bits and pieces - transmission tunnel, and modifying the front clip that was previously cut off to go back on around the new engine, mated up to the new front chassis. Did a test fit of the IR EFI set-up on the LS3 and will have to relocate heater motor and make a new duct to the scuttle air intake. Have ITG airfilters and blank baseplates coming which will attach directly to velocity stacks, and I'm pretty sure it will all fit under the bonnet. Will add a cold air tray around the lot.

Custom radiator on its way from Heat Exchanger Specialists in Christchurch. Rear mufflers and tips being HPC coated. Went up a notch in cam selection to complement the IR intake - using this www.summitracing.com/parts/sum-8707

Once Hamish finishes the headers, engine comes out and we will push into engine bay prep/paint, plumbing/wiring, and Hamish will finish-weld the front chassis section.

Hope all is well. Cheers, Andrew 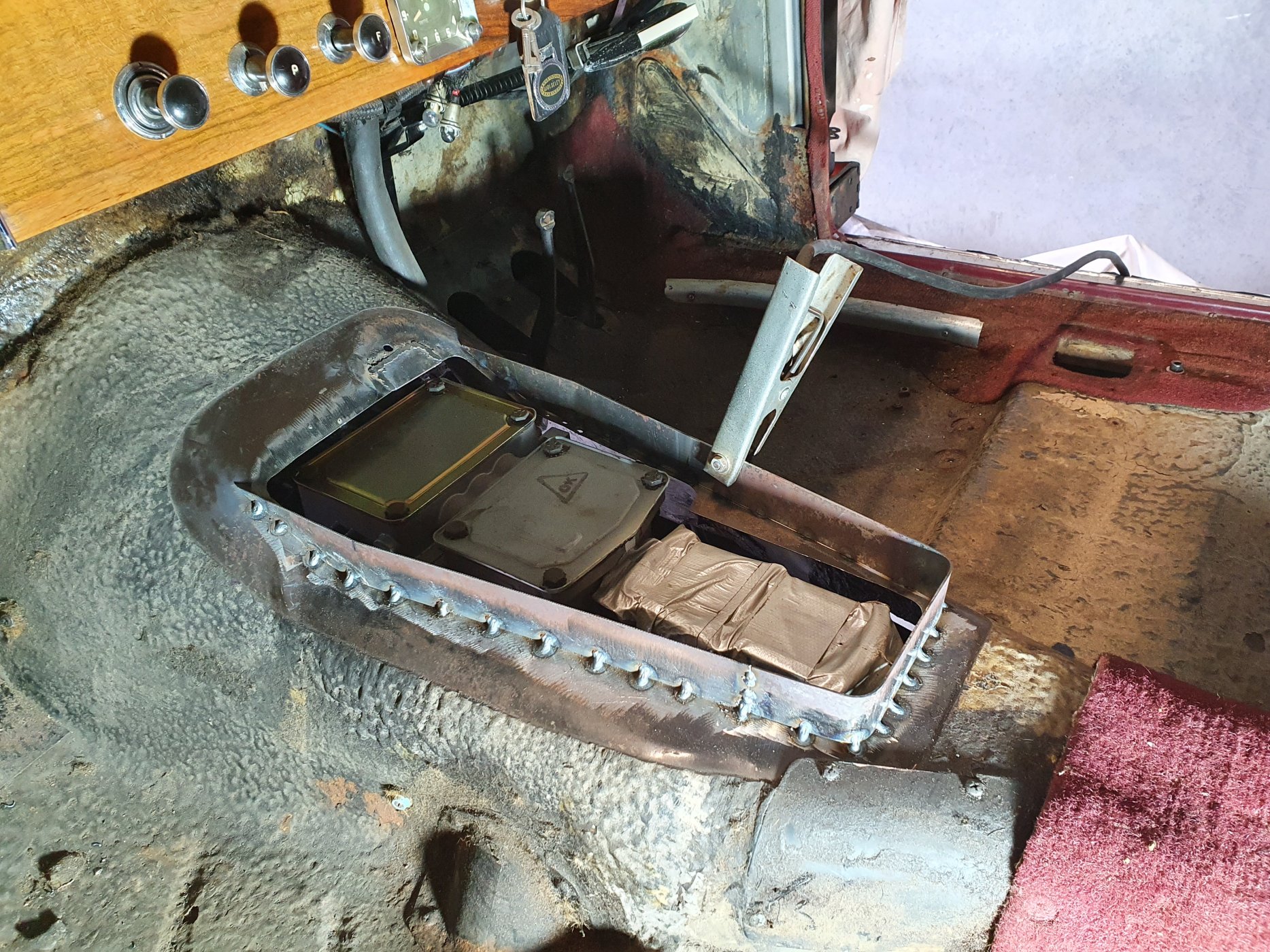 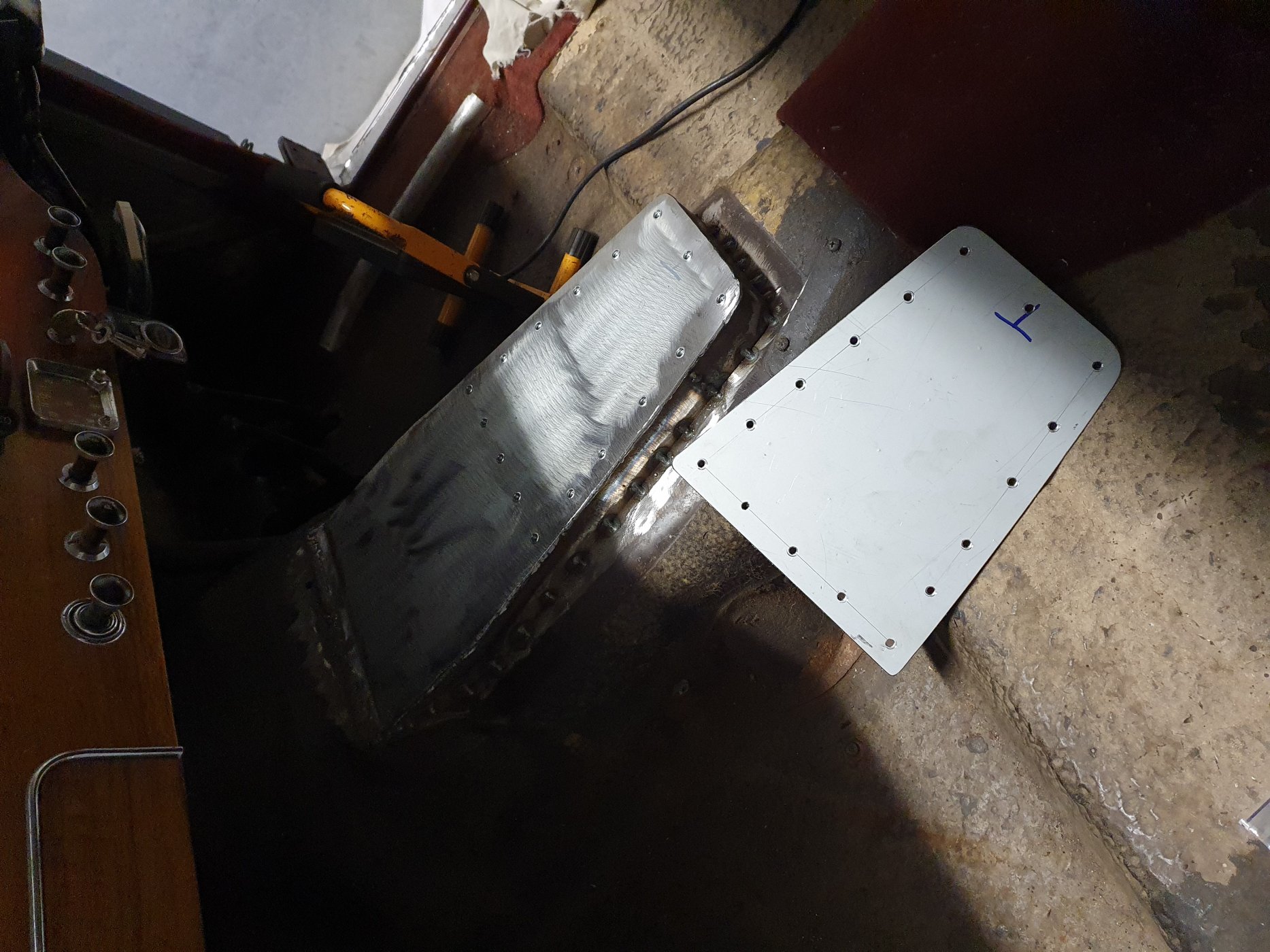 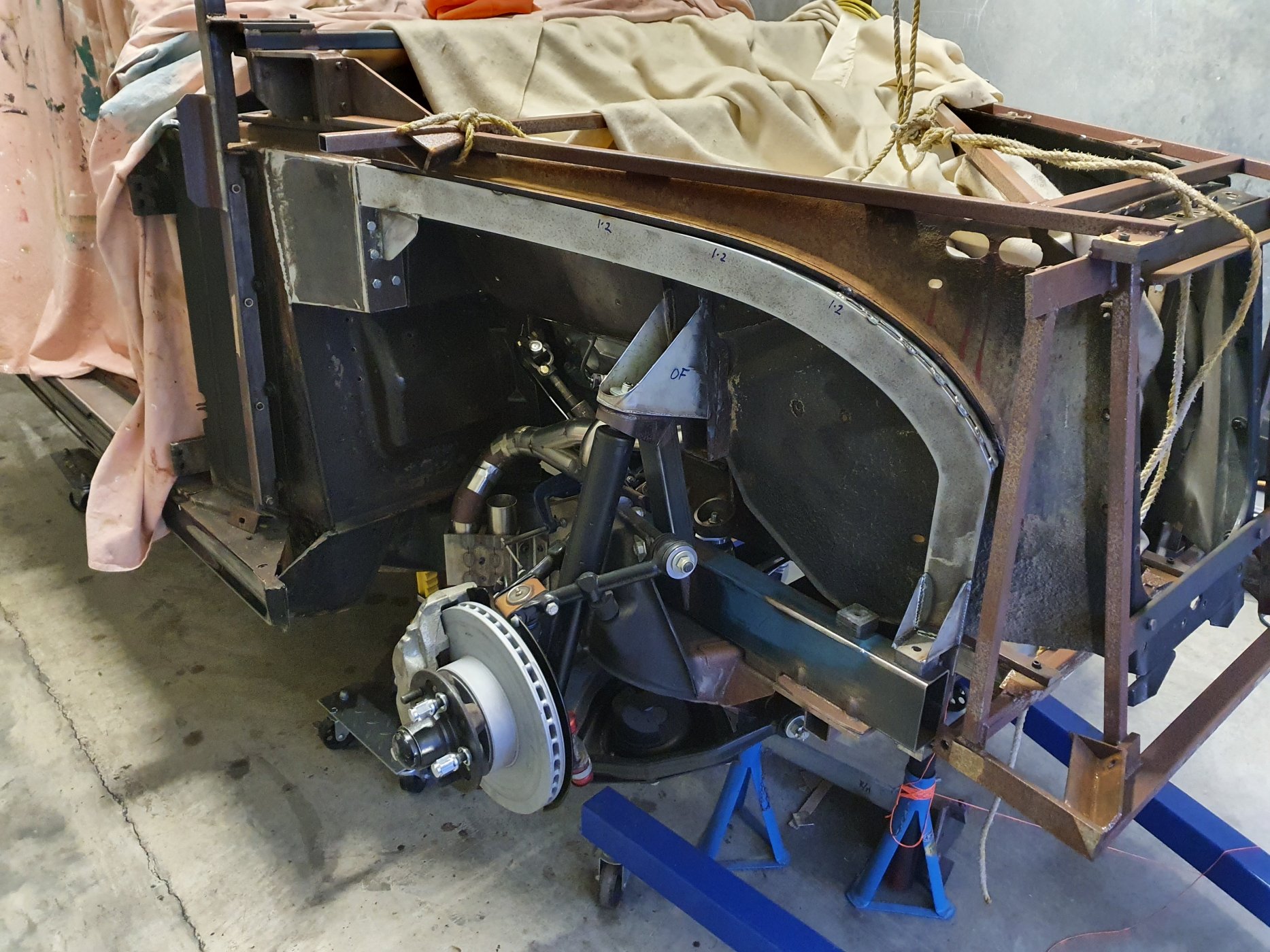 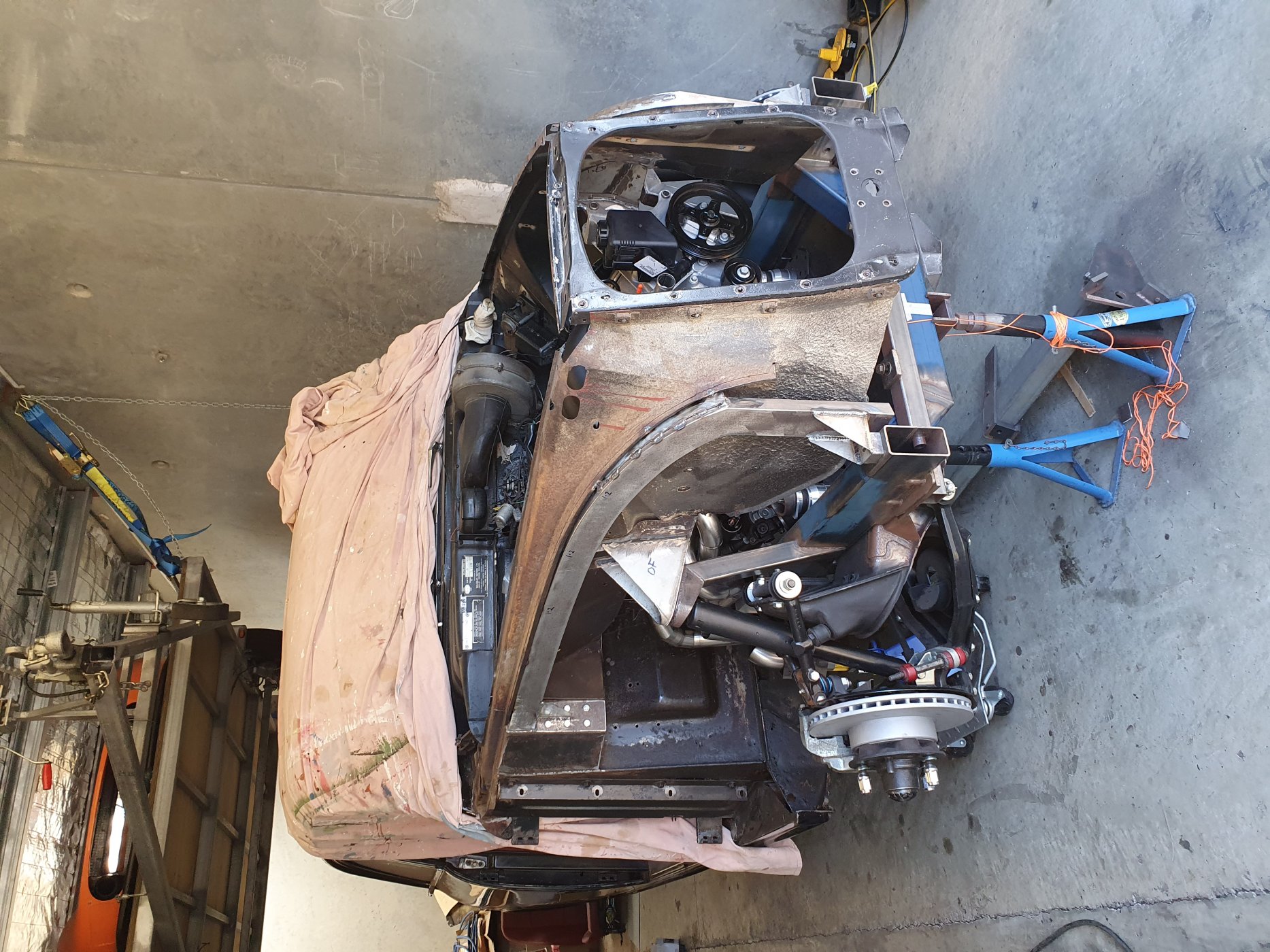 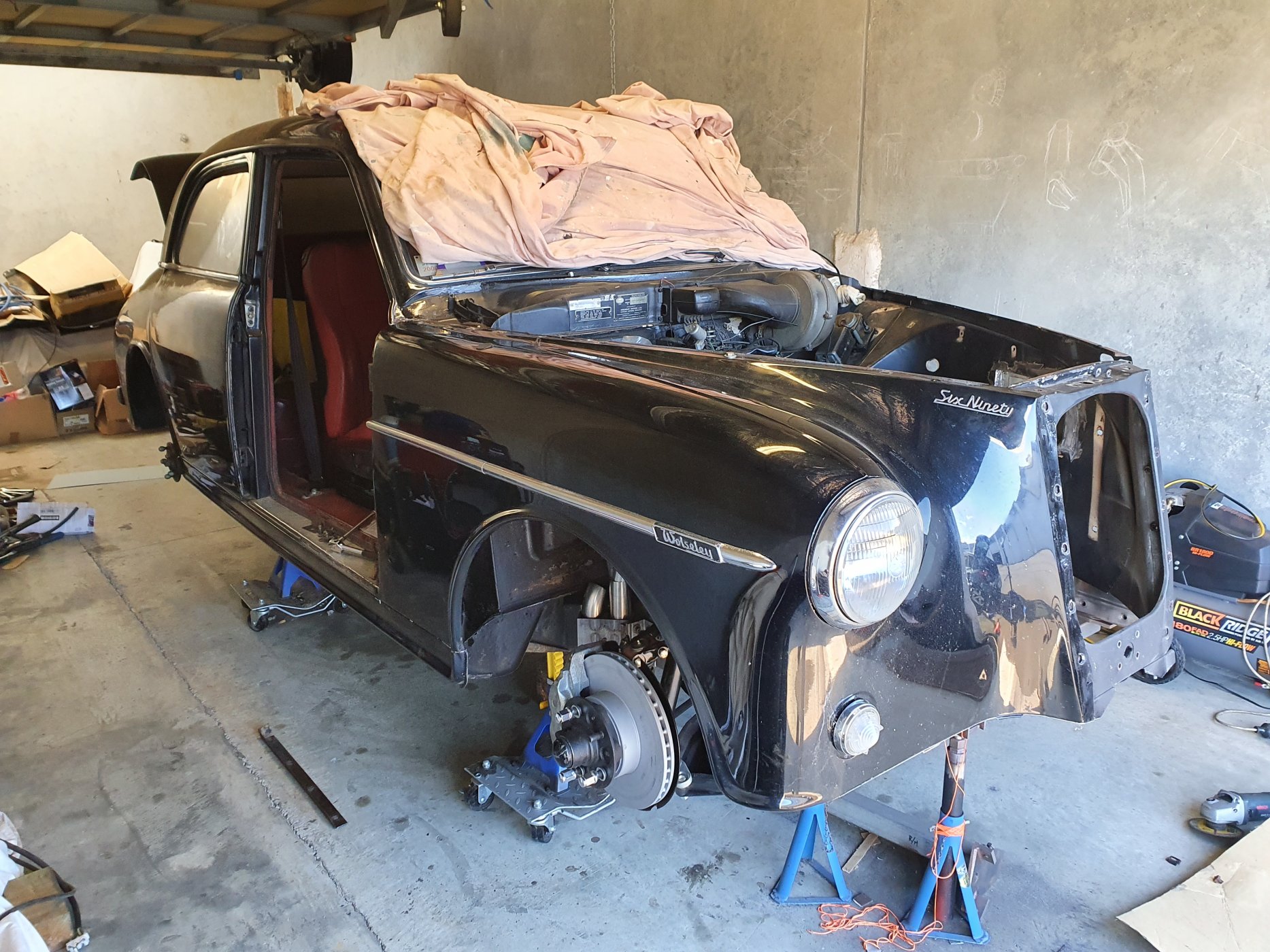 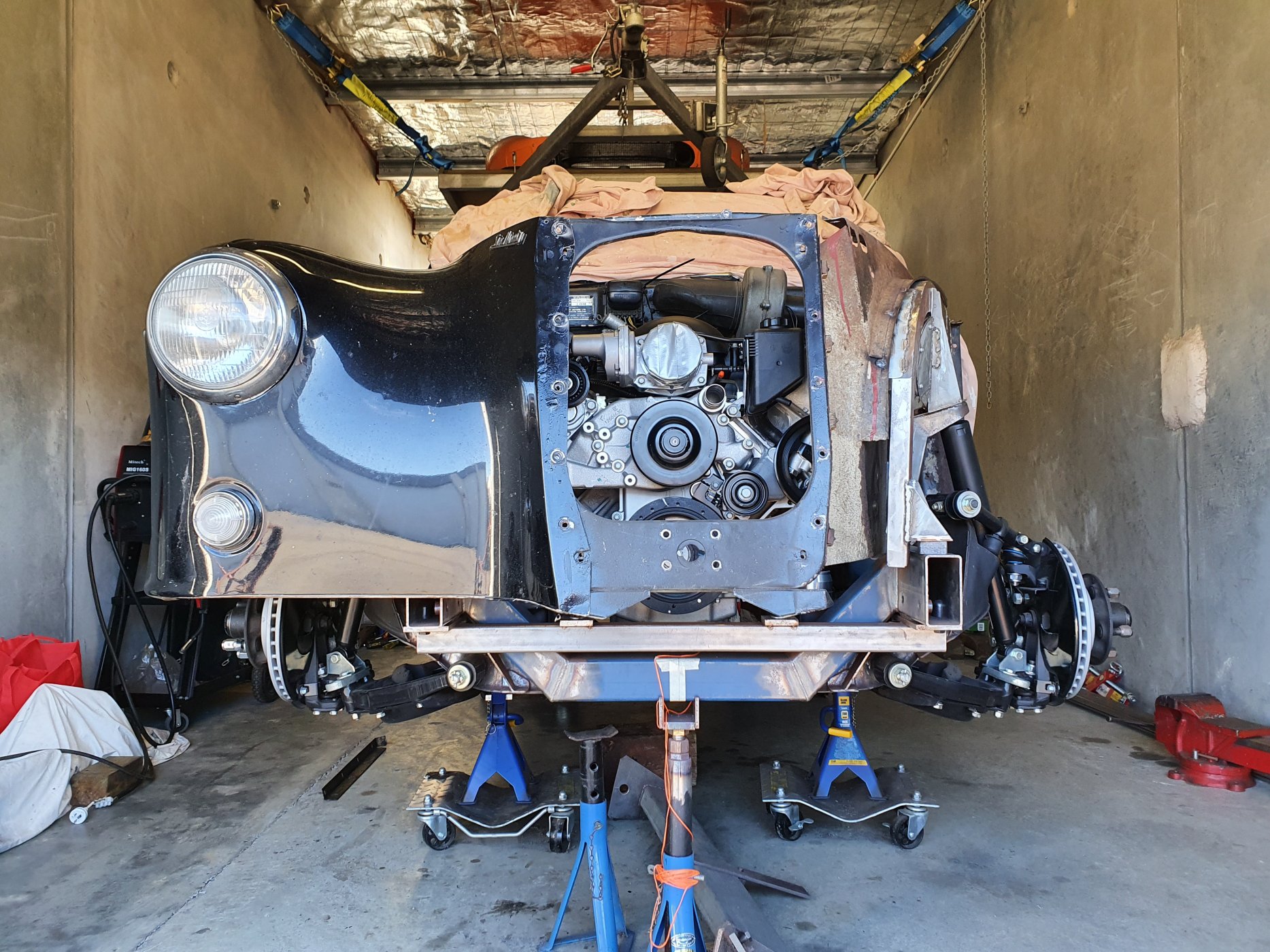 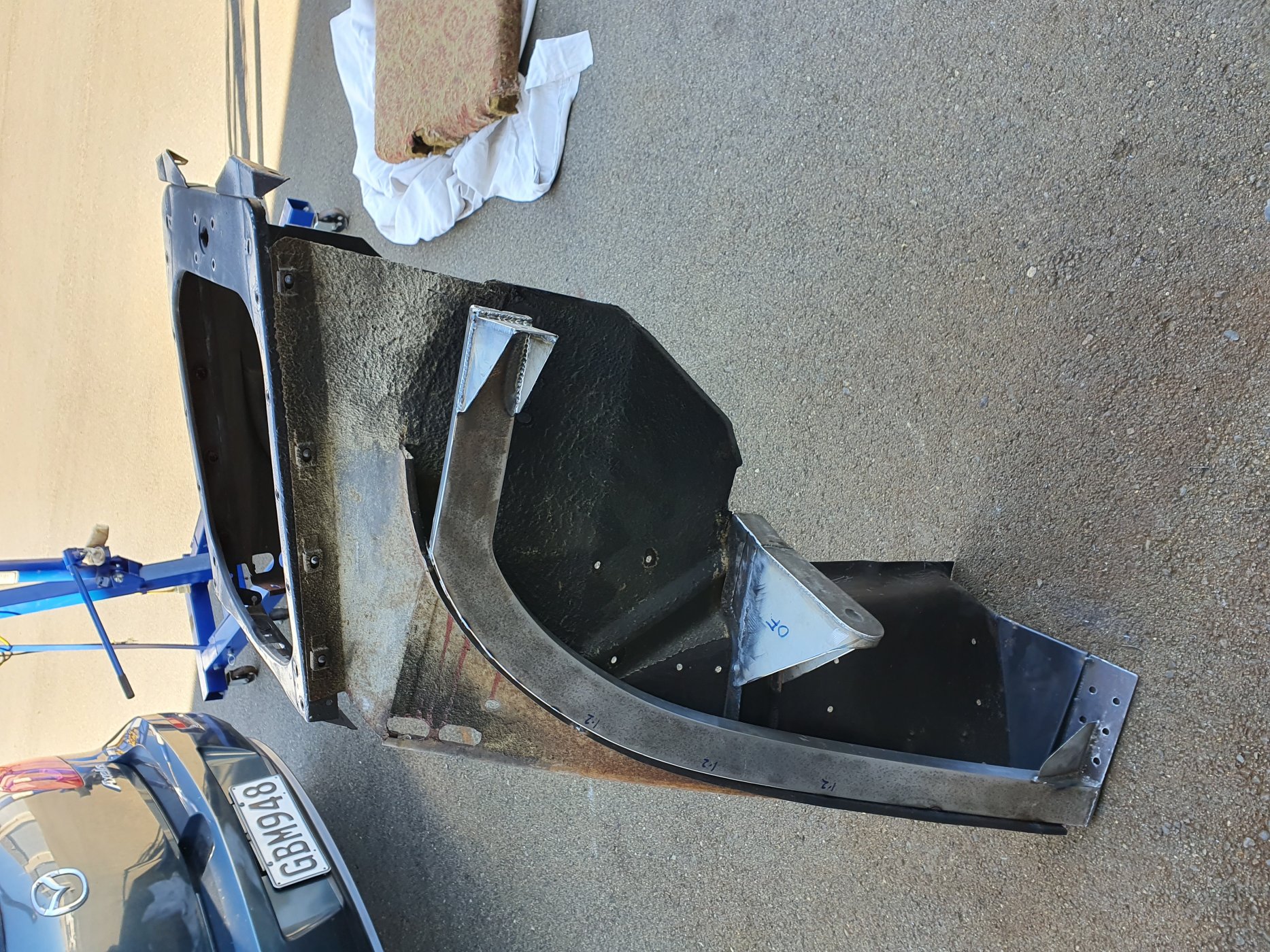 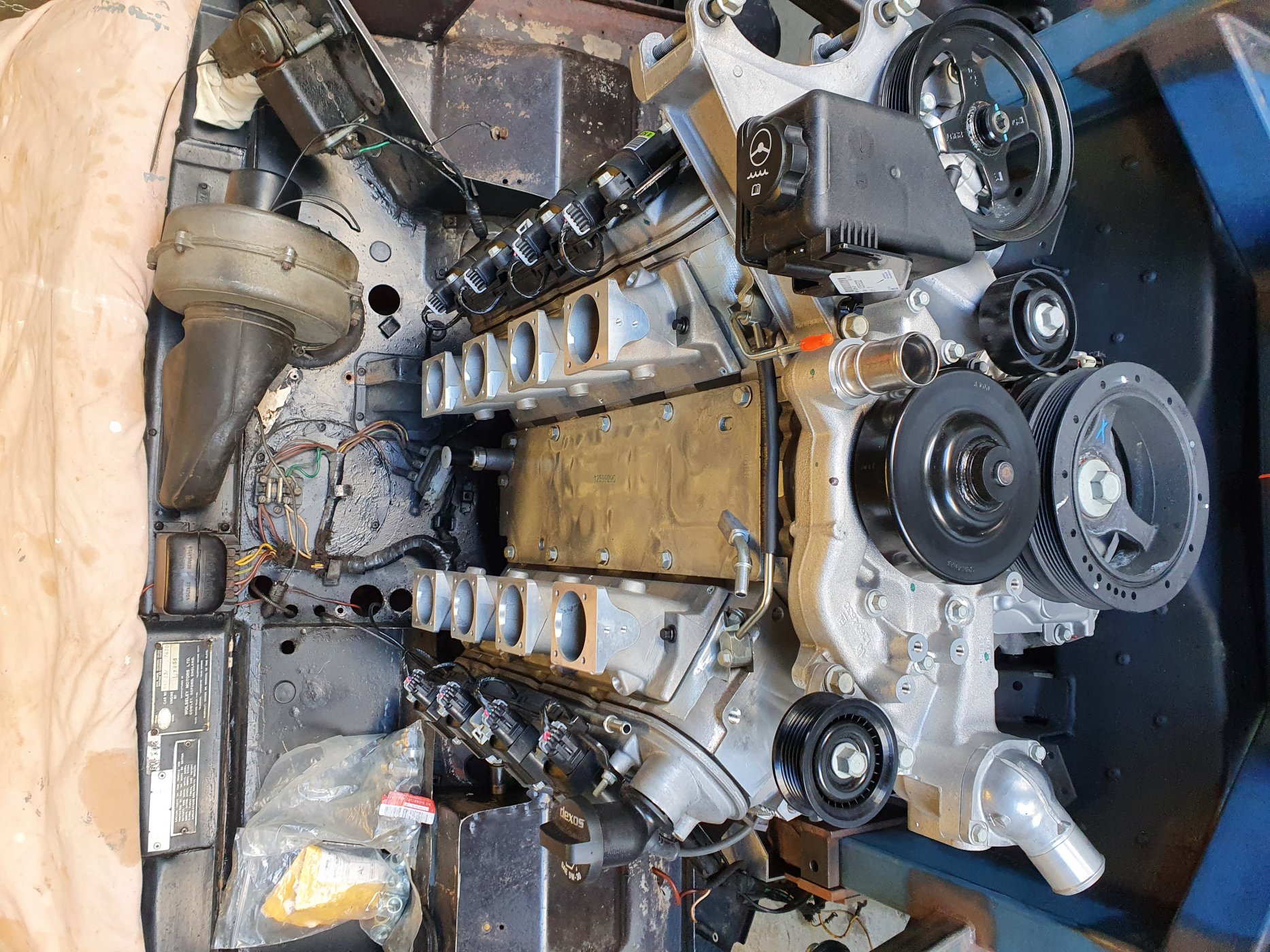 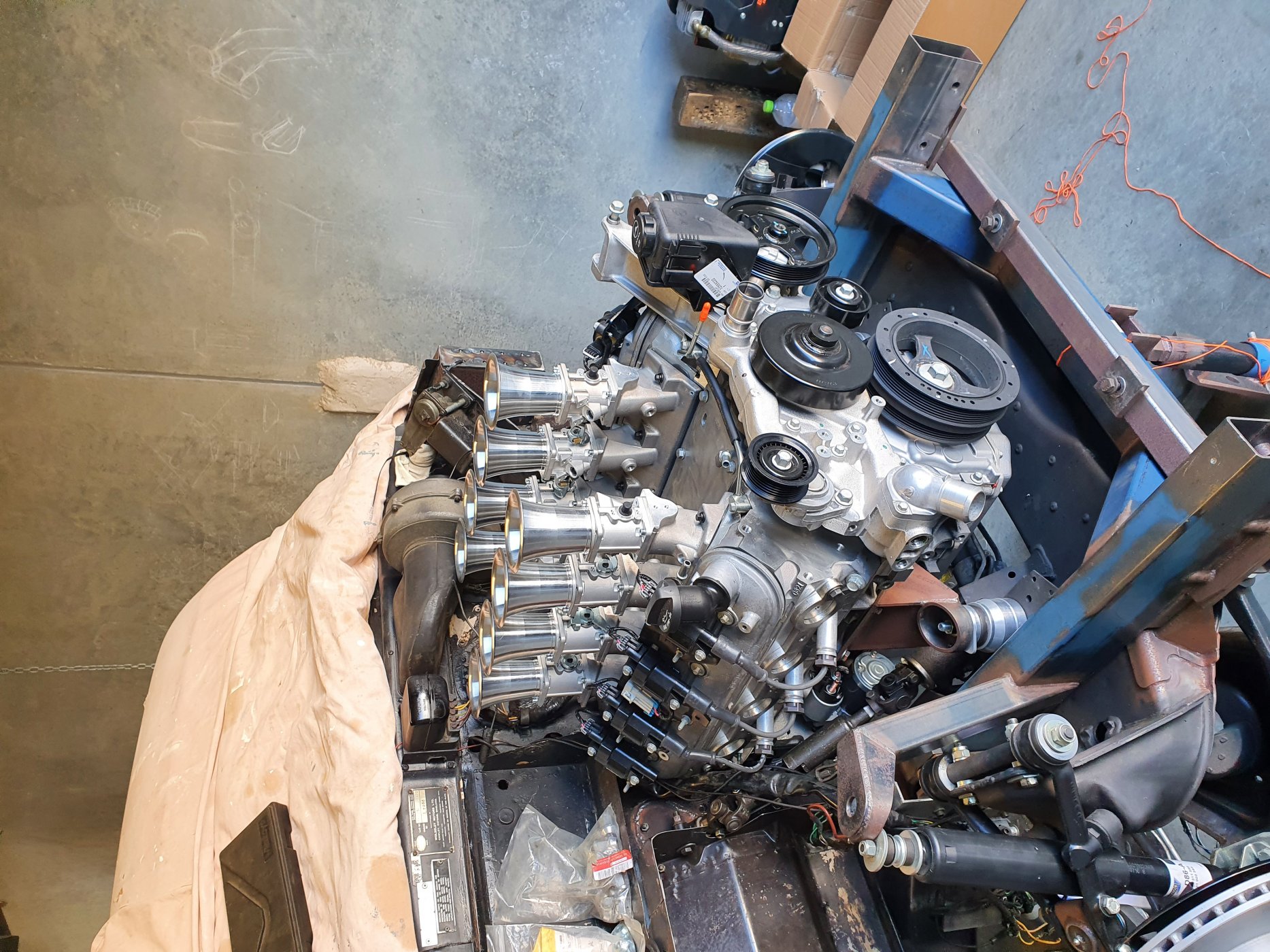 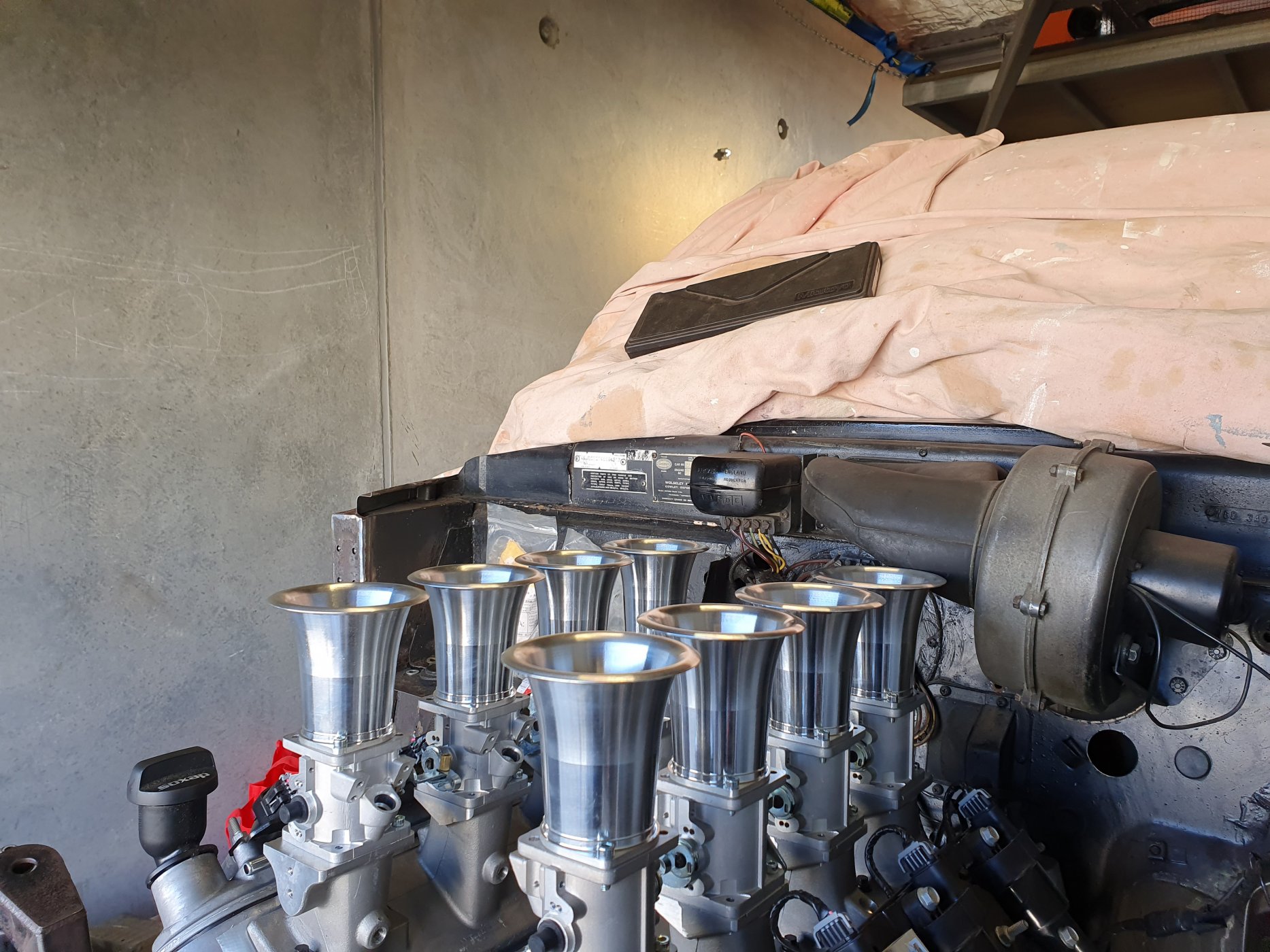 This is great Andrew! Love it.

Lifetime Supporter
After seeing the vid below I now realized where you're heading to.....


And yes it's a Rover and no Wolseley
A

Hi all, another minor update. Have completed the air cleaner assemblies around the 8-stack set-up. Got blank backing plates from ITG delivered with the filters, had these water-jet cut along with some nylon spacers to pack them down for the necessary bonnet clearance. Glued it all together to the underside of the lips on the stacks while they were bolted in position, then followed along with proper mounting tabs on stand-offs that pull the whole lot into a solid single assembly. Sorry about the sideways pics - not sure how to fix those. Cheers, Andrew