Supporter
Been knocking off items still slowly. Still working on sanding the center console, splitter and side skirts. I’ve been holding off until I can clear them all at the same time.

Should have purchased these a long time ago. If anyone is reading this who is thinking about building, buy some quick jacks. I can drive right over them and they leave plenty of room to do things under the car. 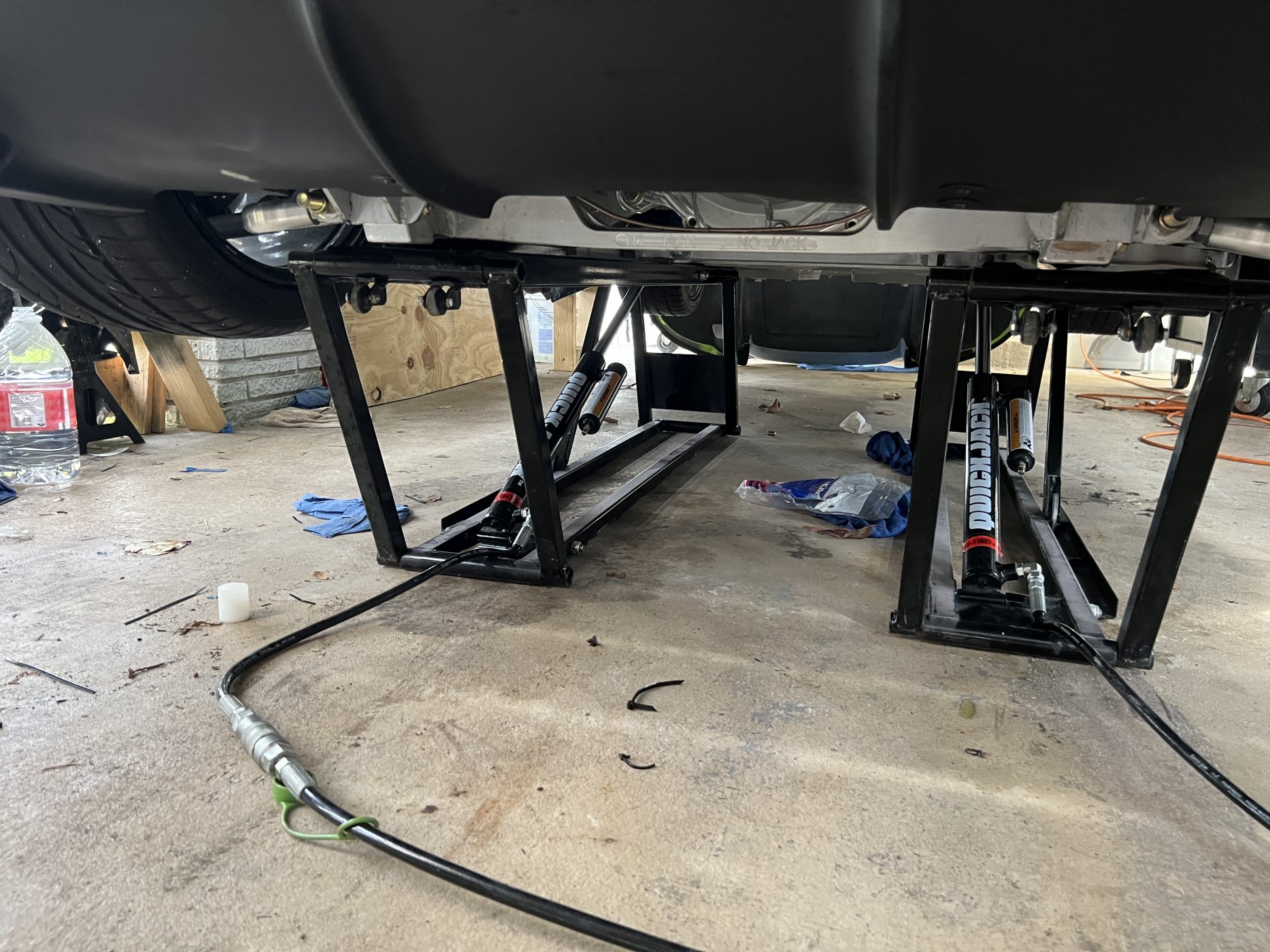 Took out the thin sheet metal that was covering the holes near the frame and slider. Replaced them with some formed fiberglass covers. Ugly but functional and they’ll never be seen. Blue and aluminum tape was just for mock-up. These will be fastened with 1/4 hex bolts. 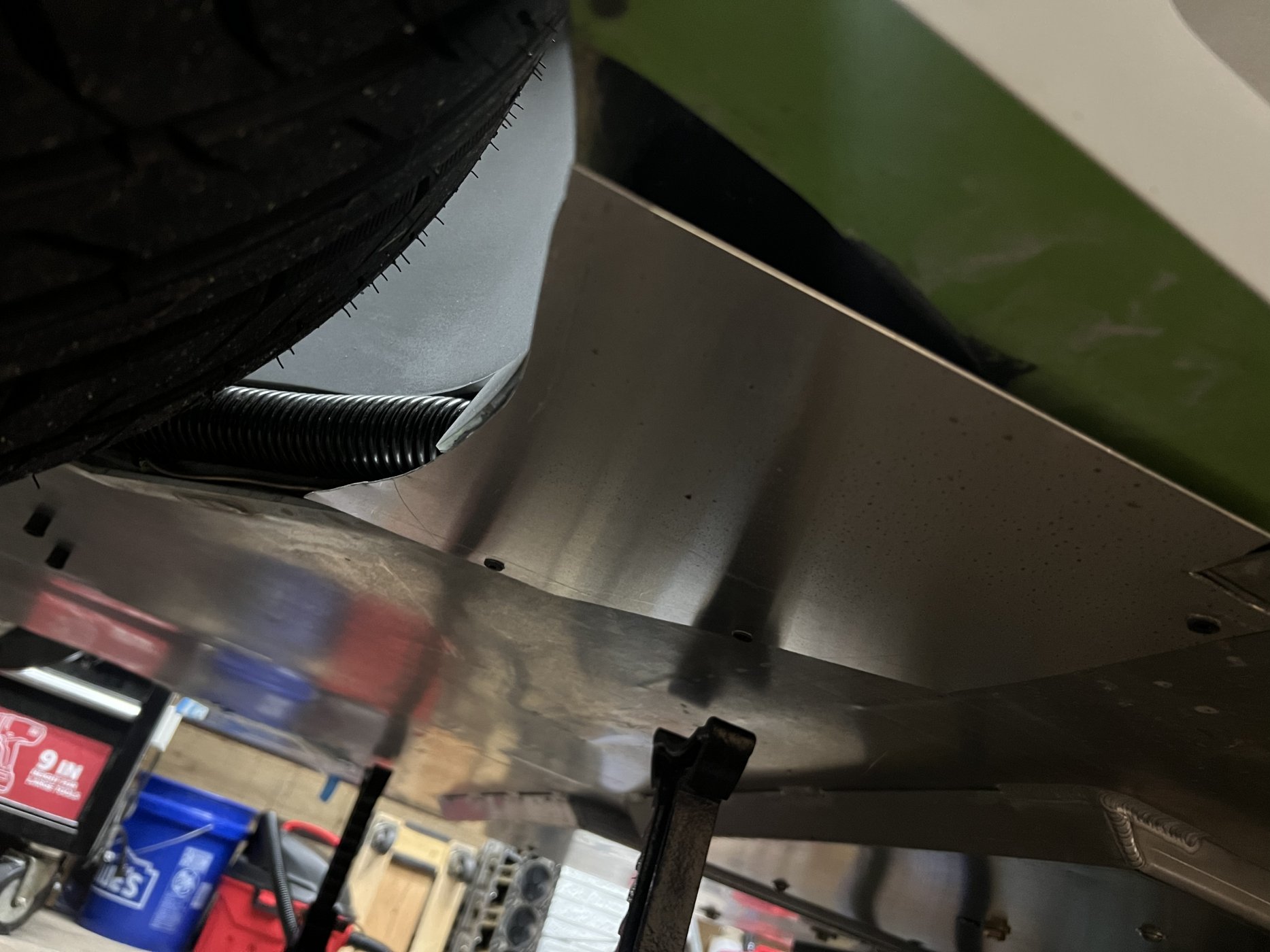 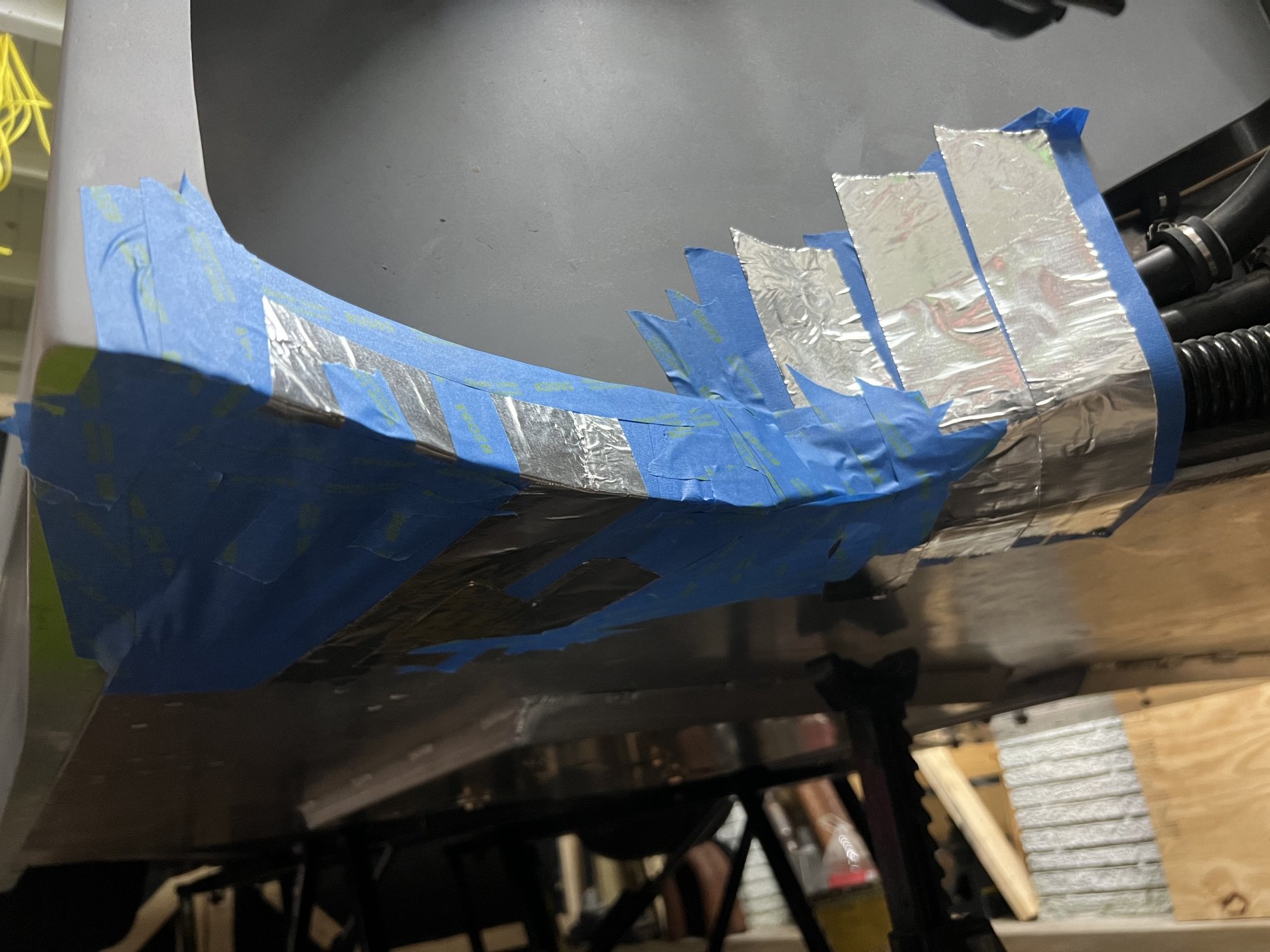 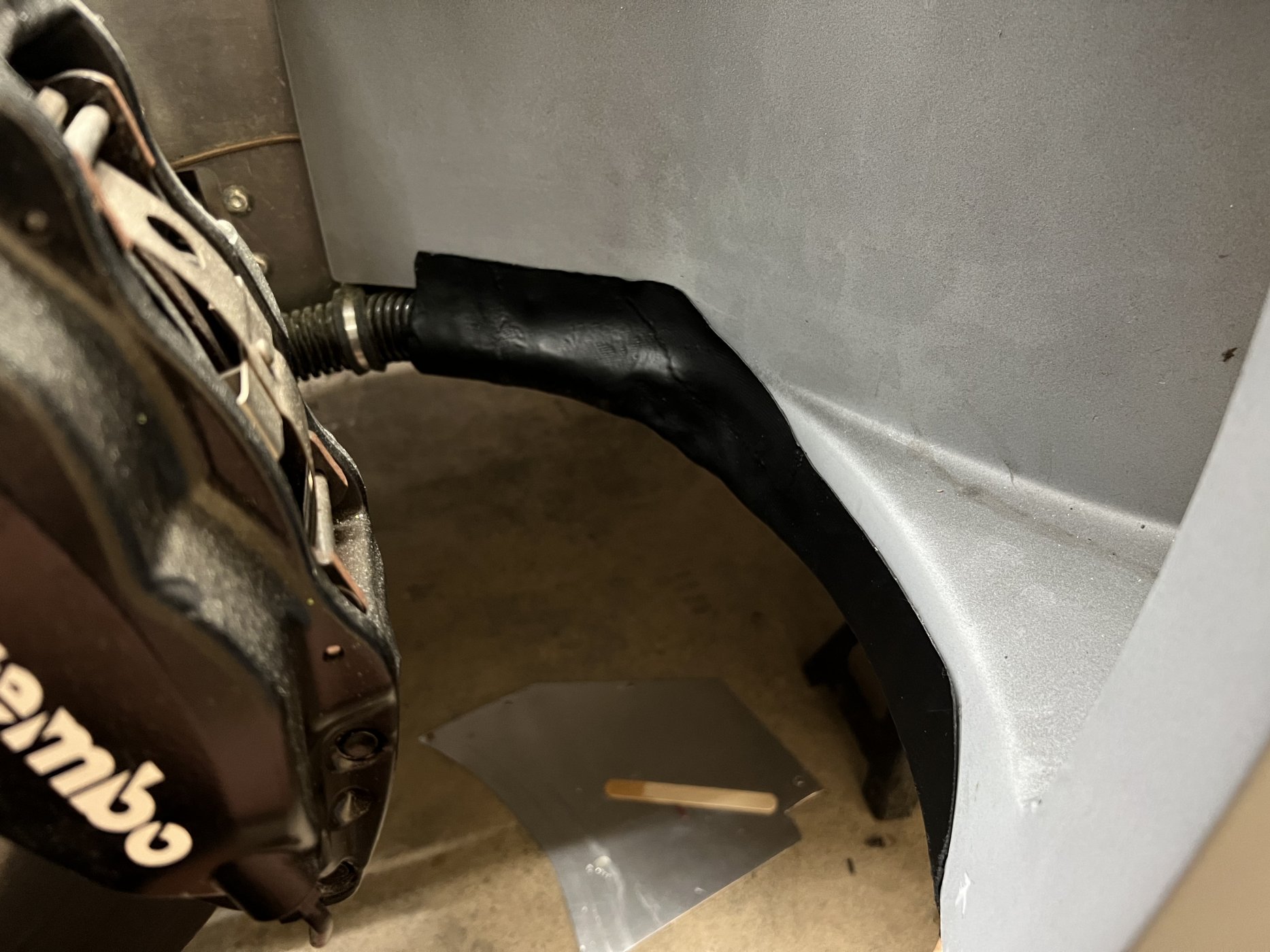 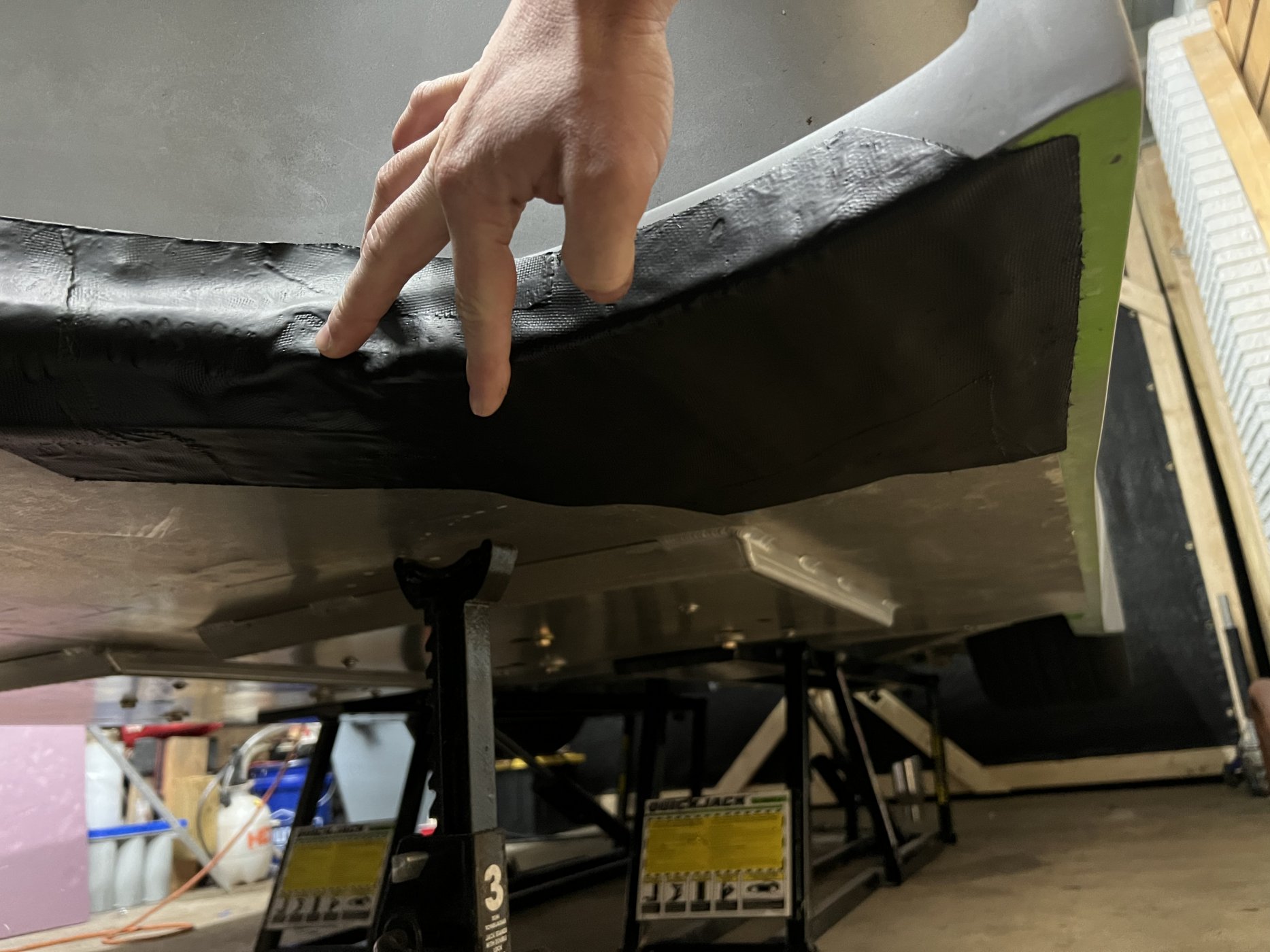 Got some quick jacks on sale at costco last year! Just need to buy the car to put on top of them. They're pretty solid, I've used them sideways on our SUV for some tire swapping. They aren't what I'd call convenient, but they do work very well.
S

Supporter
50 miles on the car now. Mostly city, nothing much above 70mph. It’s about 79 degrees here in south Florida.

Holy hell this thing is hot. I need to do a few things like open up the front ducting more, build a dedicated heat shield/deflector and possibly better fans. My temps do hold around 200. Not sure how they’ll do in 100 degree days in traffic. I’m not necessarily worried about the engine overheating as I am myself.

Which brings me to my next quest, the A/C. I’ve ordered a manifold and vacuum pump. Figure I can do it myself and avoid having to take it to a shop multiple times for the inevitable leak. That should be done next week.

Having a loud cool exhaust sounded good in theory. However, it’s just too damn loud with the cutout still closed. The big venture is going to be redoing the exhaust, with the cats installed as well. I cant step out of the car without smelling like exhaust fumes.

I’m also having issues with bolts rattling out of my ceiling and side pods. I highly suggest going with at least an 8-32 to secure the panels with some blue locktite.

With that being said it’ll probably be another month before I get it on the road again. I just can’t drive it in the current state and be comfortable.

Supporter
Be careful with using loctite. It’s only designed for metal to metal contact. Using it on other substrates can actually weaken the threads. It eats plastic for example.

SoFlo said:
Having a loud cool exhaust sounded good in theory. However, it’s just too damn loud with the cutout still closed. The big venture is going to be redoing the exhaust, with the cats installed as well. I cant step out of the car without smelling like exhaust fumes.
Click to expand...

Originally I had no soundproofing in my GT. It was an echo chamber and I think it was actually louder in the car than behind it. I haven't read through your build thread but if you haven't put some effort into noise attenuation, it'd be well worth it. I did a modest amount and the difference it made was enormous. Without going overboard, people who have been in it are surprised to be able to converse underway.


SoFlo said:
I’m also having issues with bolts rattling out of my ceiling and side pods. I highly suggest going with at least an 8-32 to secure the panels with some blue locktite.
Click to expand...

You may want to try drilling out the holes to the appropriate size and epoxying in some helicoil inserts. This is what I did with the windows and headlamp covers for my GT (at the suggestion of someone else) and it has worked well. I forget exactly what I did to size them correctly but a little trial and error should set you set up and then do it for real on the car.
S

Supporter
Went to charge my AC today to no avail. Held vacuum for 30+ minutes. Went to load 134 in it and the low side just wouldn’t go about about 30. The high side didn’t really move much either. It seems that the compressor definitely isn’t kicking on and it appears that no 134 is even going into the lines. I’m going to double check my wiring, maybe something came loose.

This system sat for 7 years in a box, I’m wondering if the dryer or Trinary could have gone bad.

**just disconnect the quick disconnects to see if the system had any pressure at all, it did have some when depressing the shrad

Supporter
You should be charging it through the low side only. Make sure the schrader valve is being depressed by the charge connector. You can jump 12 volts to the compressor clutch while running the eng to draw the refrigerant in. The low pressure switch will not allow the clutch to engage until a minimum pressure is reached. I am assuming you are charging from 12oz cans because an ac charge machine will force the refrigerant in under pressure in liquid form with the engine not running. With the cans you want to keep the can right side up so it’s charged with gaseous R134a as opposed to liquid to minimize the possibility of damaging the compressor while the eng is running with clutch engaged.
S

My big issue was the AC knob was not set to AC. I don’t have my knobs finalized yet so I was going off the instructions from vintage air, I was going two clicks on the knob when it should have been just 1 for AC. You can verify by checking to see if the knob is sending out 12v to the Trinary. The car is mostly charged although I think I can out a little more in there. The manual calls for just over 24oz, I got about 18. Issue being my fans just aren’t pulling enough cool air across the condenser.

Which again, I for sure need to buy the maradyne fans.

If anyone in the future reads this, the black/green wires on the Trinary are basically 12v in from AC “on” knob, to Trinary, then out to the compressor. The switch cuts power when pressures are either too low or high. The two black wires from the Trinary essentially act as a ground source for the electric fans to kick on to cool the condenser.

Also, if you’re using cans to fill the system, it helps to keep them in a little hot water to keep the pressure high in the can which will help charge the system a little quicker.
S

Supporter
Front hinge was big on my to do list. Two 1/4 aluminum 3.5in pieces, used some 1.5in square tube to space off the frame. Expoxy spacers as the gap just wasn’t perfect. It works as it should, however the wheels have to be turned slightly or the wheel wells hit the tires. I also need to craft up some pneumatic lifts as it is hard to hinge up as one person. I’ll finish cleaning up the edges later and round everything off. 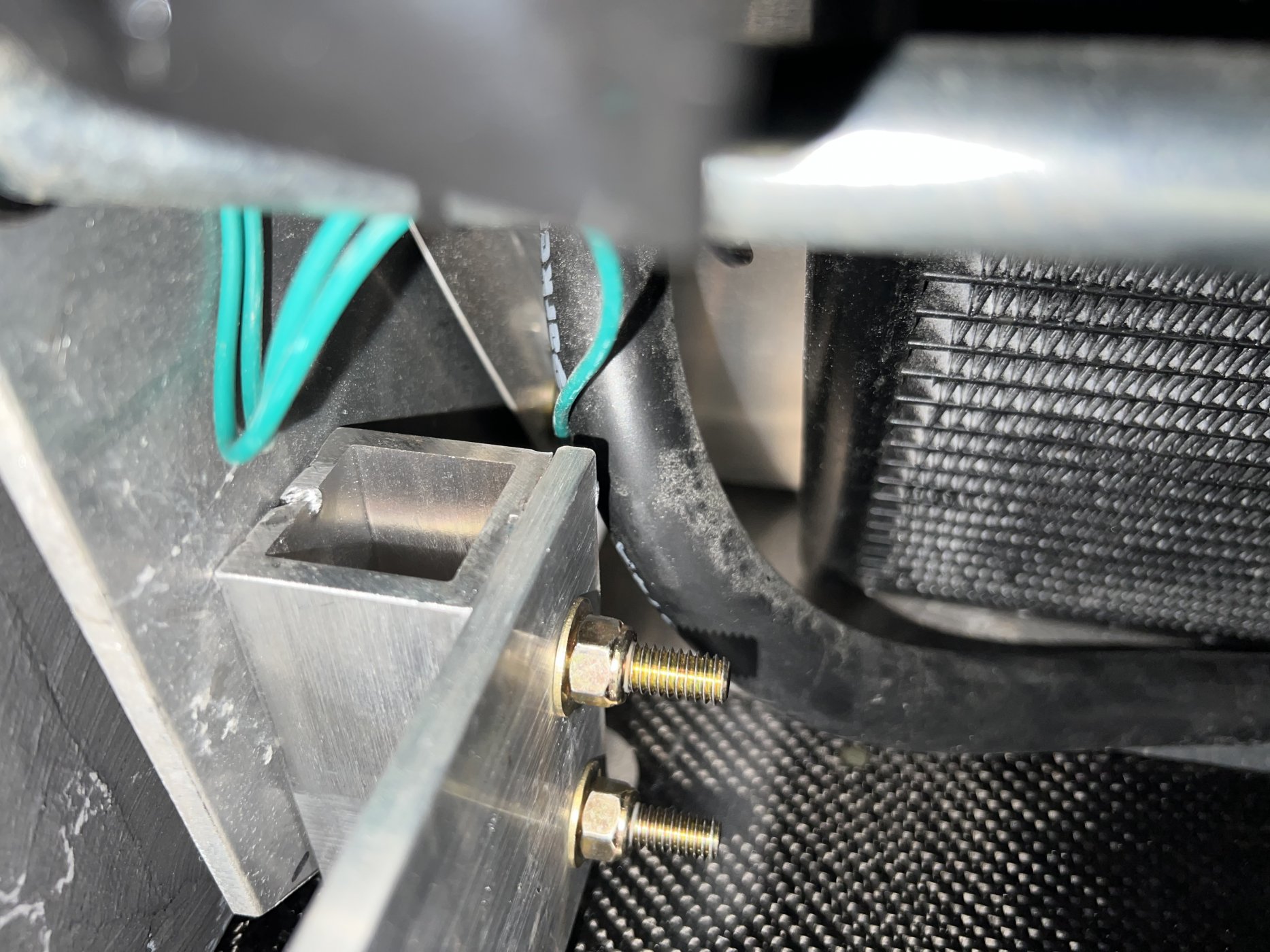 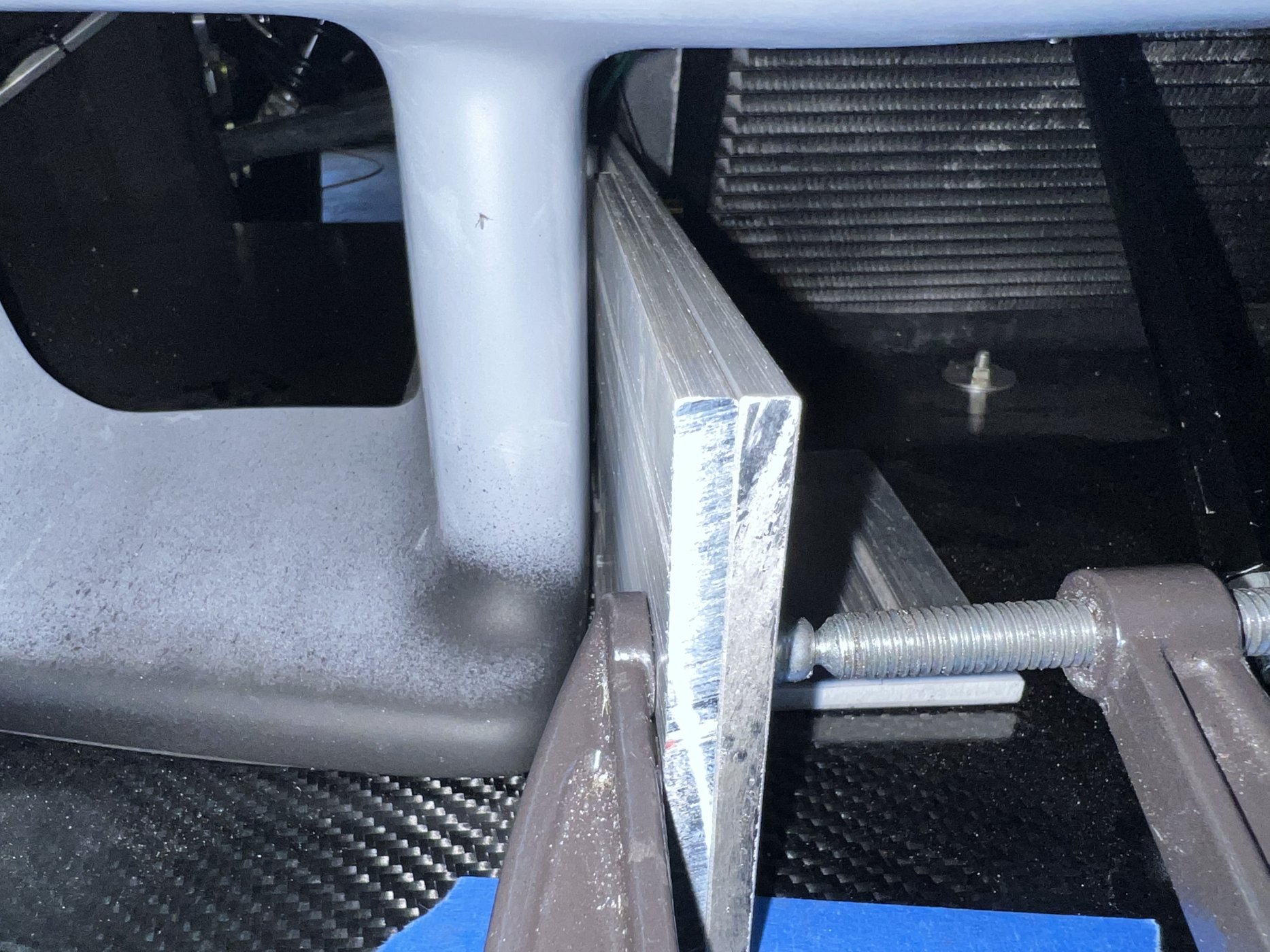 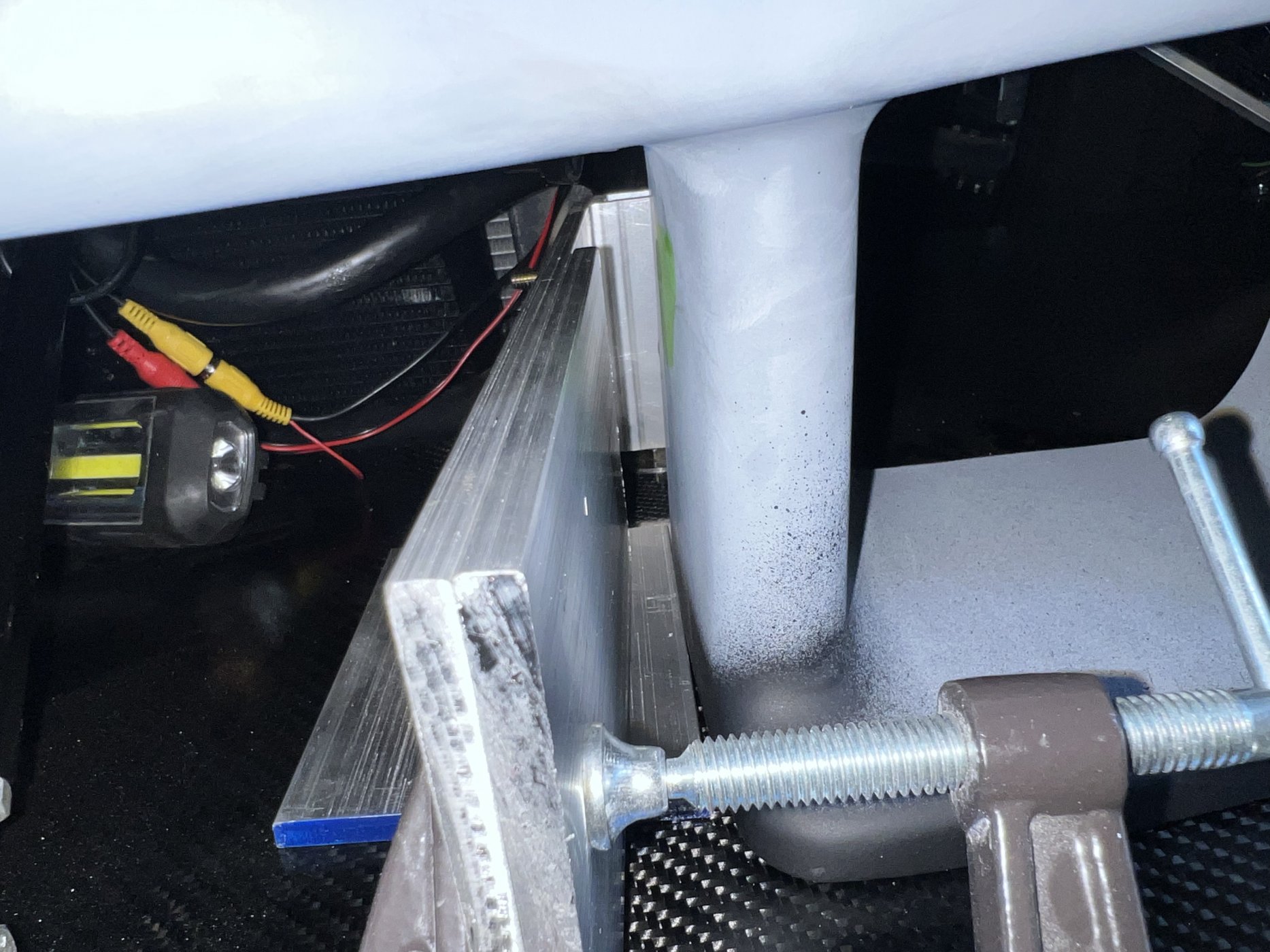 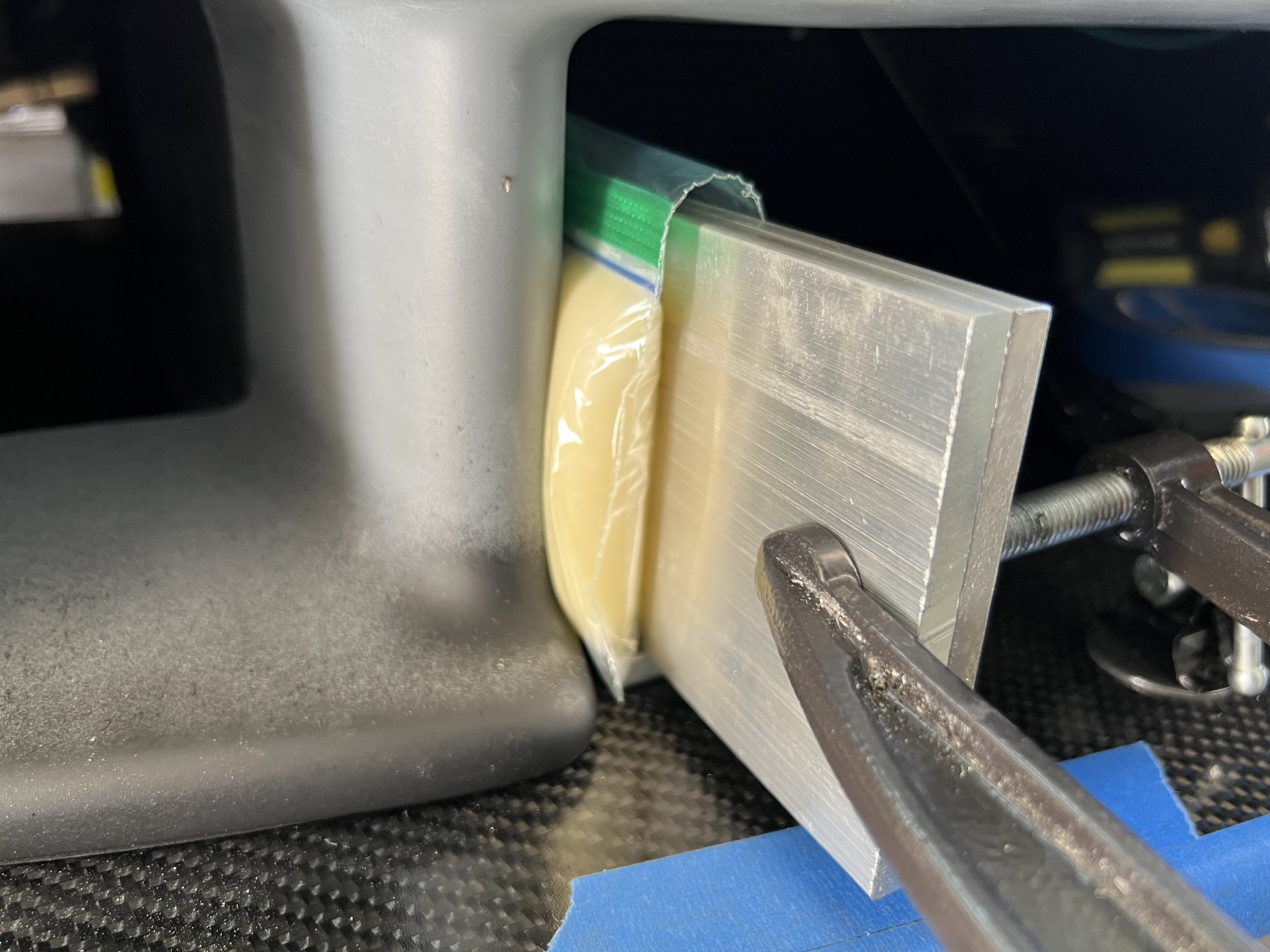 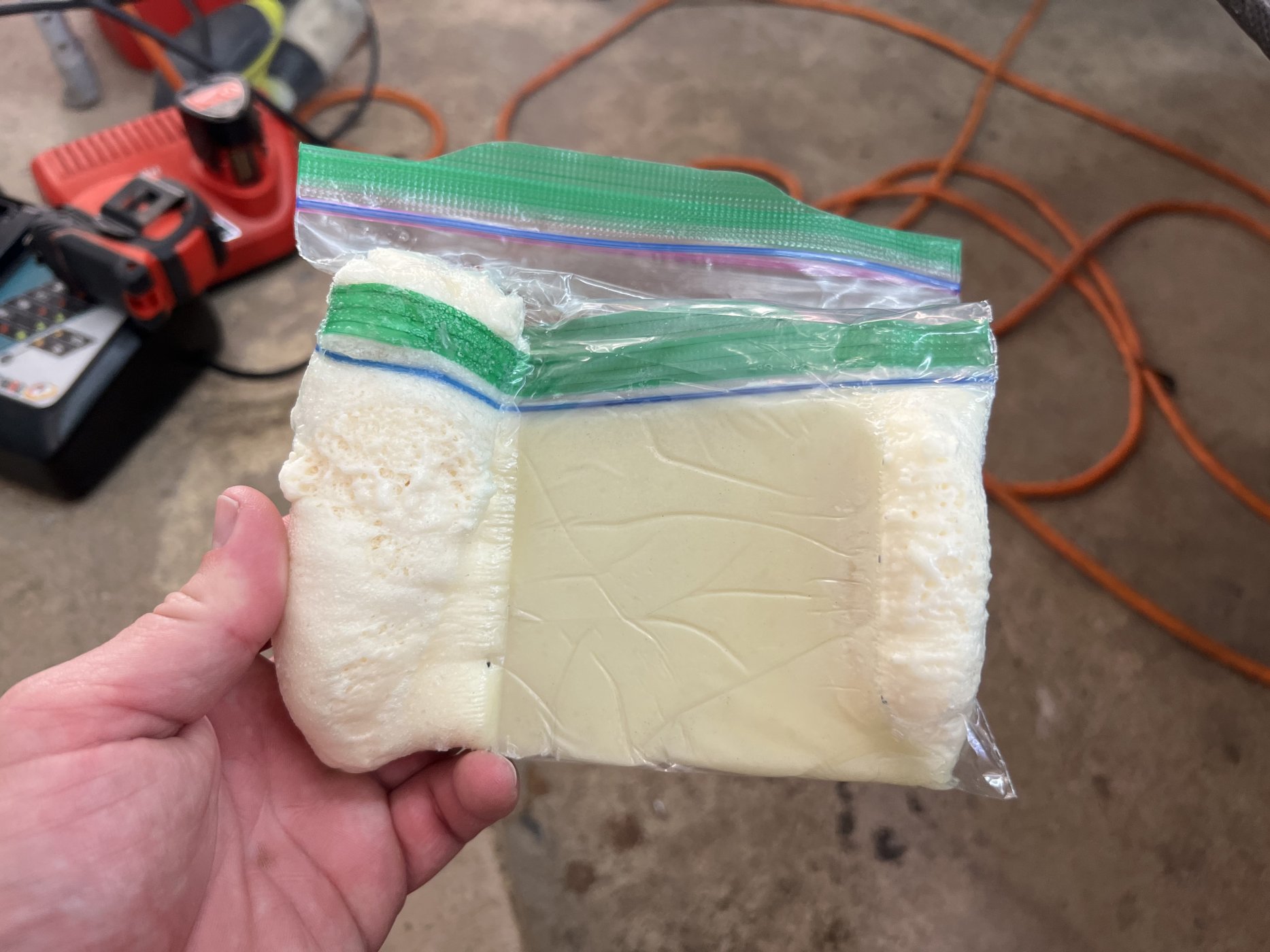 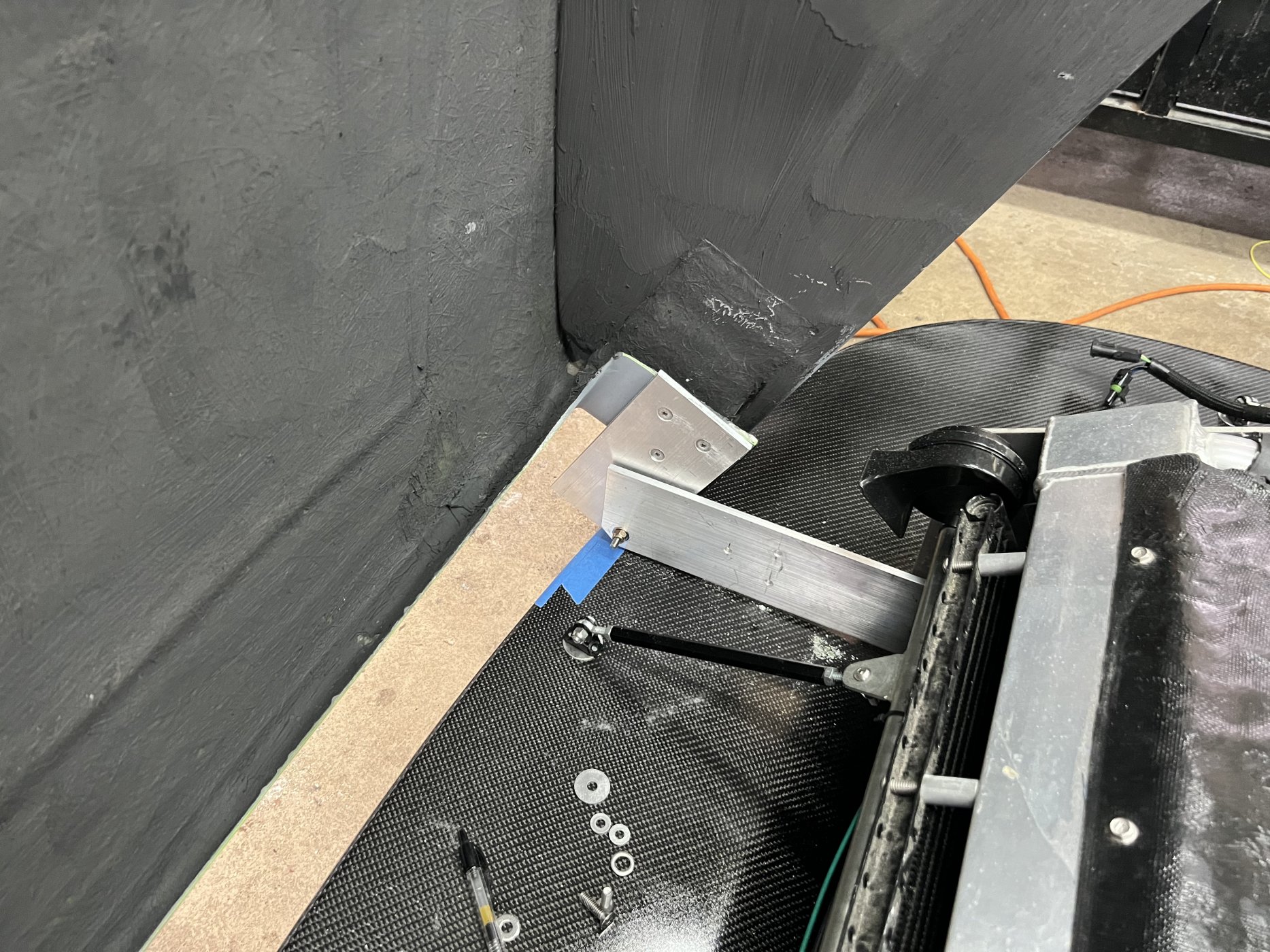 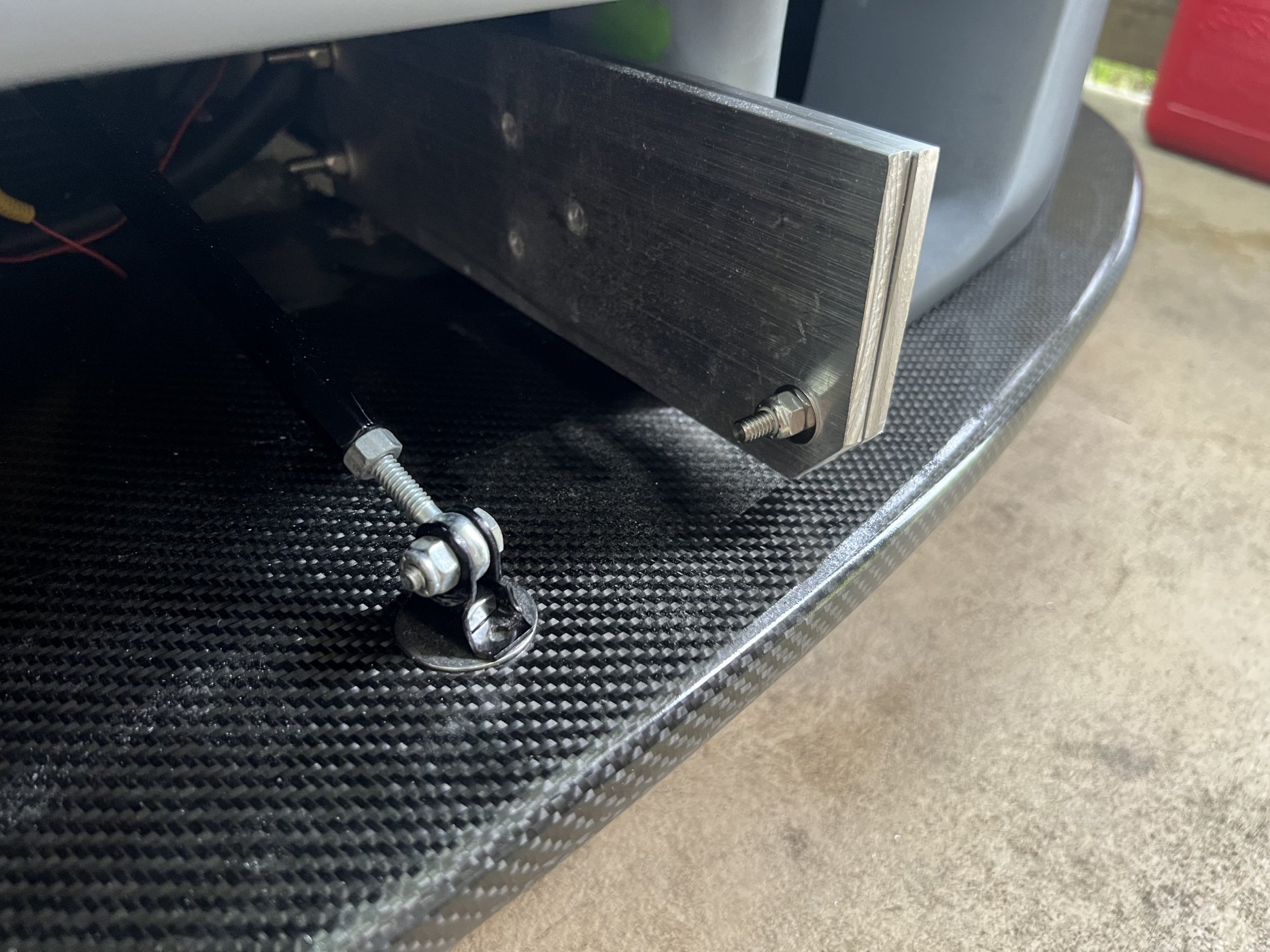 Supporter
Finally got the maradyne fans installed. Drove it around a little and let it idle in the sun. Temps have seemed to remain constant. Only time will tell in traffic.

I’ve read countless posts about the hot air being blasted onto The front wall and how it heats up the cabin. Everyone is 100% right. You have to duct the air out some way. My plan is to open up the front of the clam more and create a dedicated duct that channels the air. Another thing to think about is how the hot air blasts right onto the AC dryer and lines. You really should keep these cool and insulated as possible. That should help with AC cooling as well.

As with others with LS engines. I’ve been having issues with stalling while coming to a stop. Especially with the AC on. We just did some more remote tuning which I hope has helped. Only time will tell.
S

Supporter
This is going to look stupid, and it is. I didn’t have much laying around to act as an air diverter for the front clam. But low and behold I had an old windshield sun shield. As proof of concept I’ve laid it in as haphazardly as possible to test. During a brief drive things seem to be much improved.

Going forward I will be cutting out more of the front clam and probably adding in some vents, similar to the C7 corvettes. I’ll then attempt to reorganize the front area and build a fiberglass air diverter.

Happy to report otherwise the car stays under temp and runs much better with a raise in idle speed and some additional timing down low.

Also if anyone has any idea of where to place some gas struts and what length, that would be great. Supporter
Been awhile. Moved to a new house, finally have a garage with AC to work in. Finished up a new design for my exhaust. Don’t mind my welds, still playing with the Mig. These will be wrapped.

Anyone have measurements of the SLC fender vents?

Supporter
Congrats on the house and the garage with AC -- I'm very jealous!
The factory fender vents are 17.5" long (measured at the raised area intended for the fender cutout), 9.75" wide at the front, and 8" wide at the back (front is at the right side of the pic below, this is the driver-side vent before installation) 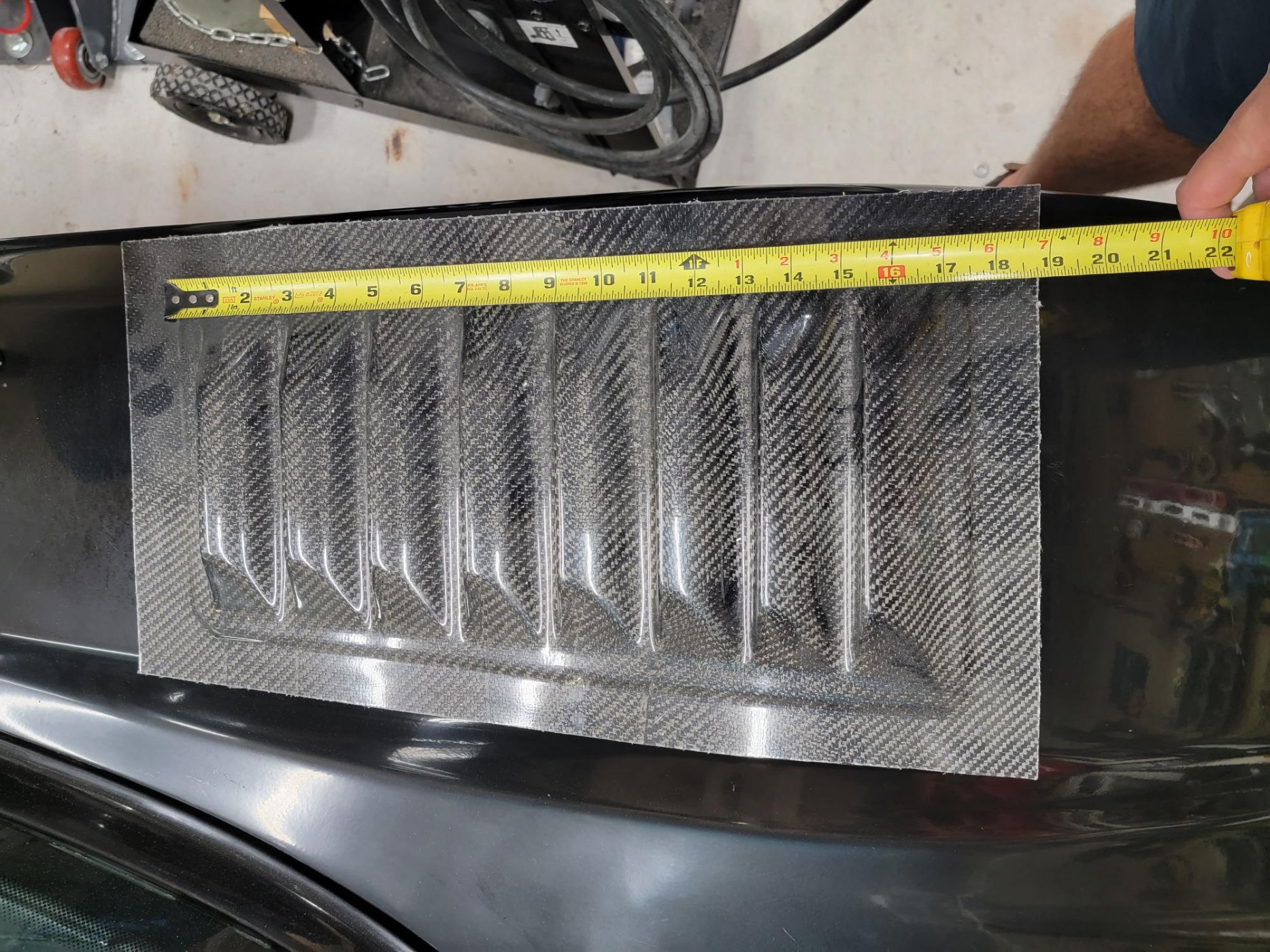 Supporter
The RCR supplied set is not symmetrical. One will fit on the l side and the other on the r. If I were to make a set, I would make one mold and then use the one re-designed style on both sides so therefore much less mold construction.
Last edited: Aug 26, 2022
S

Howard Jones said:
The RCR supplied set is not symmetrical. One will fit on the l side and the other on the r. If I were to make a set, I would make one mold and then use the one re-designed style on both sides so therefore much less mold construction.
Click to expand...

Yes sir that was the plan to make them rectangular with measurements that suffice for both front and rear. Hopefully out of pink foam first. Make one mold, fiberglass them then fiberglass them into the body.
S

Supporter
Added some ducting to the front, still need to finish. Also split the rear wing. 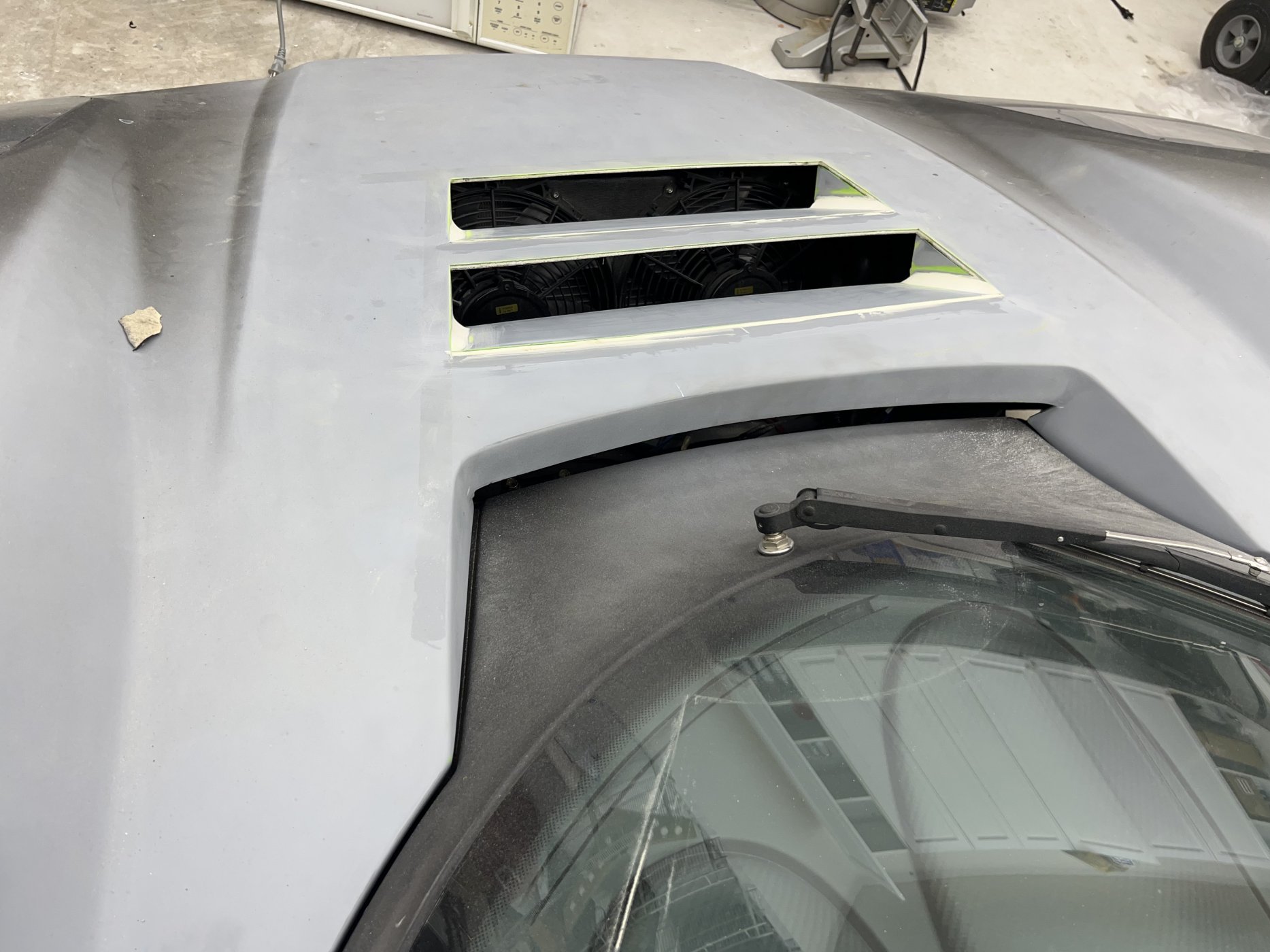 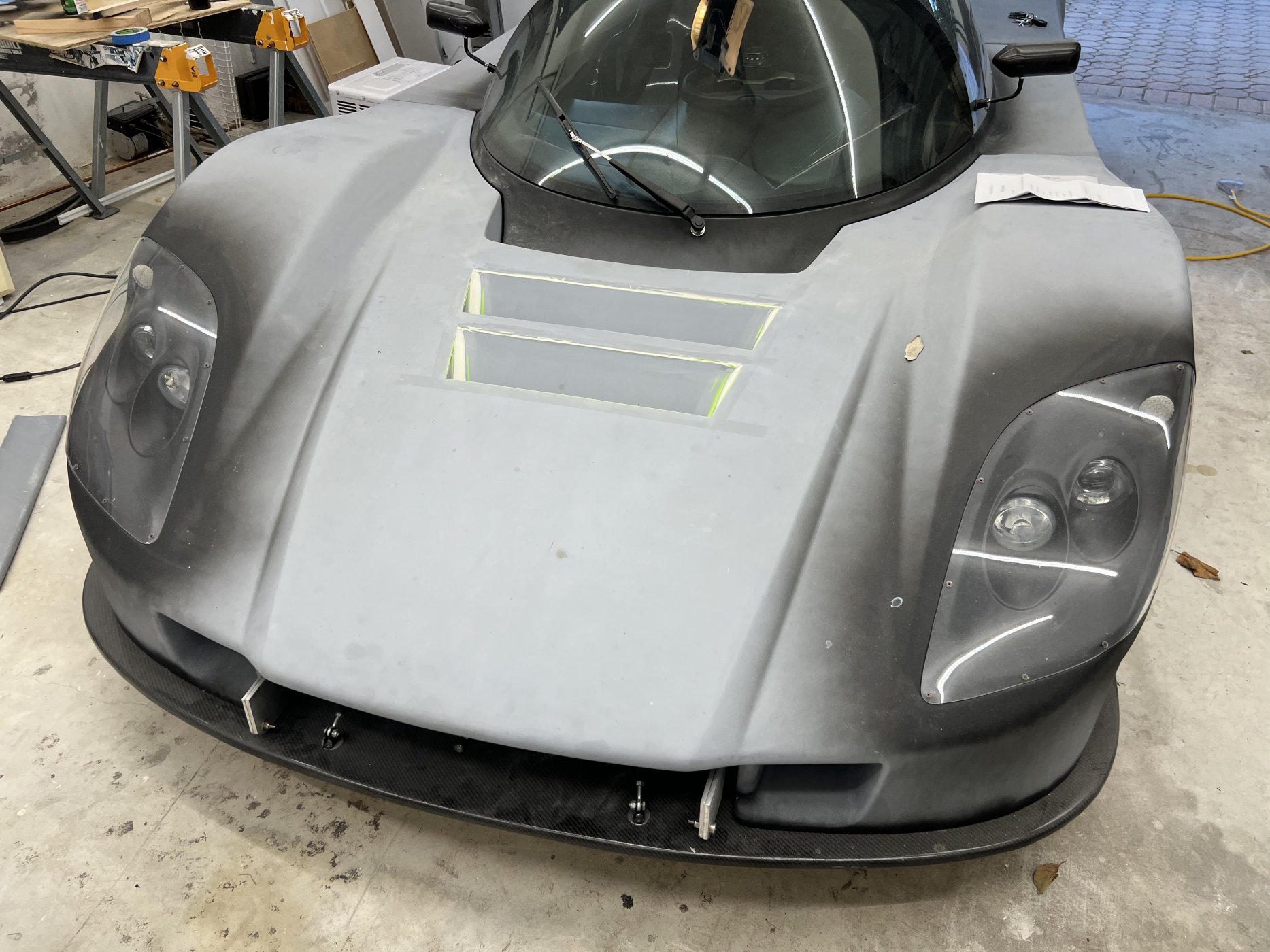 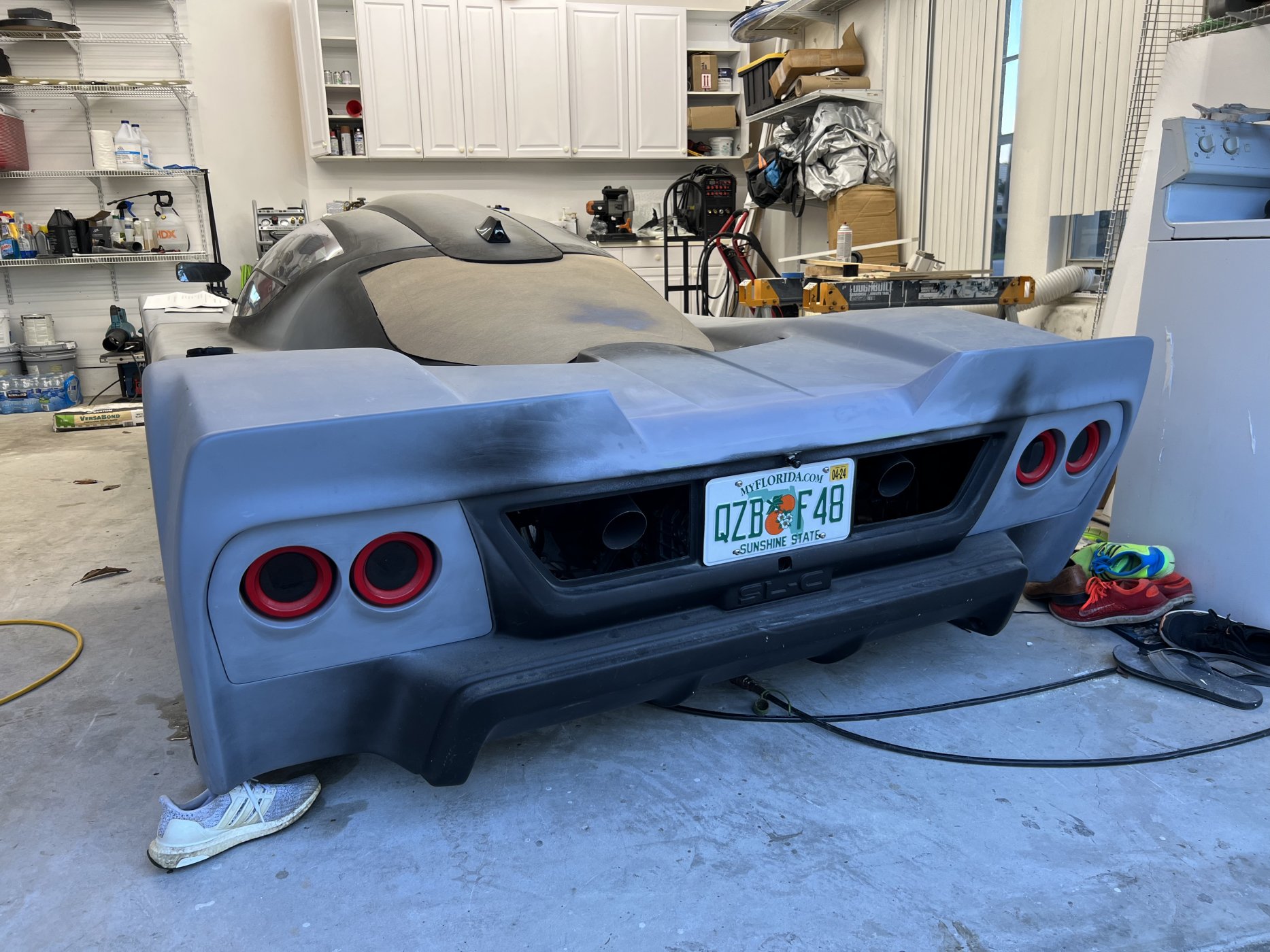 Supporter
I'm surprised that the vents were not molded in the tops of the fenders. 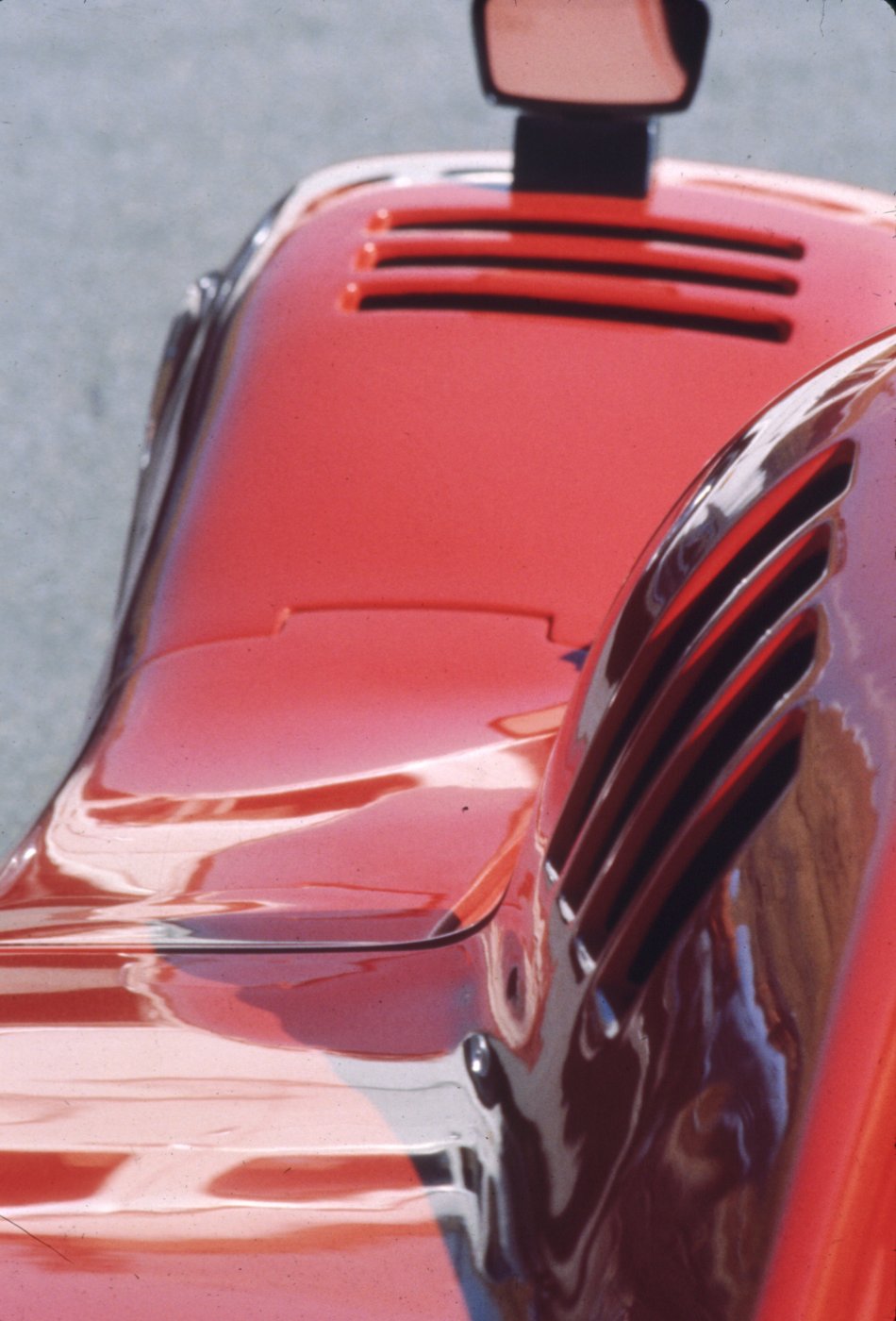 Supporter
There really isn't a NEED for the fender vents on a street car driven at near legal speeds. The SLC is intended to be a self-built street-legal supercar. Additionally, the underside of the front fenders as well as the vents take a lot of beating from road debris and the "fingers" between the vent holes are especially susceptible to cracking. I wouldn't put them on a streetcar unless I was willing to replace them as they cracked and were broken. At least they are replaceable but they would not be if molded into the original fender design.

I have repaired mine on my track car twice. Not really that difficult but you must catch them as they initially begin to crack and not wait until a "finger" comes off.