Supporter
Got the band back together and took the little car out last month. 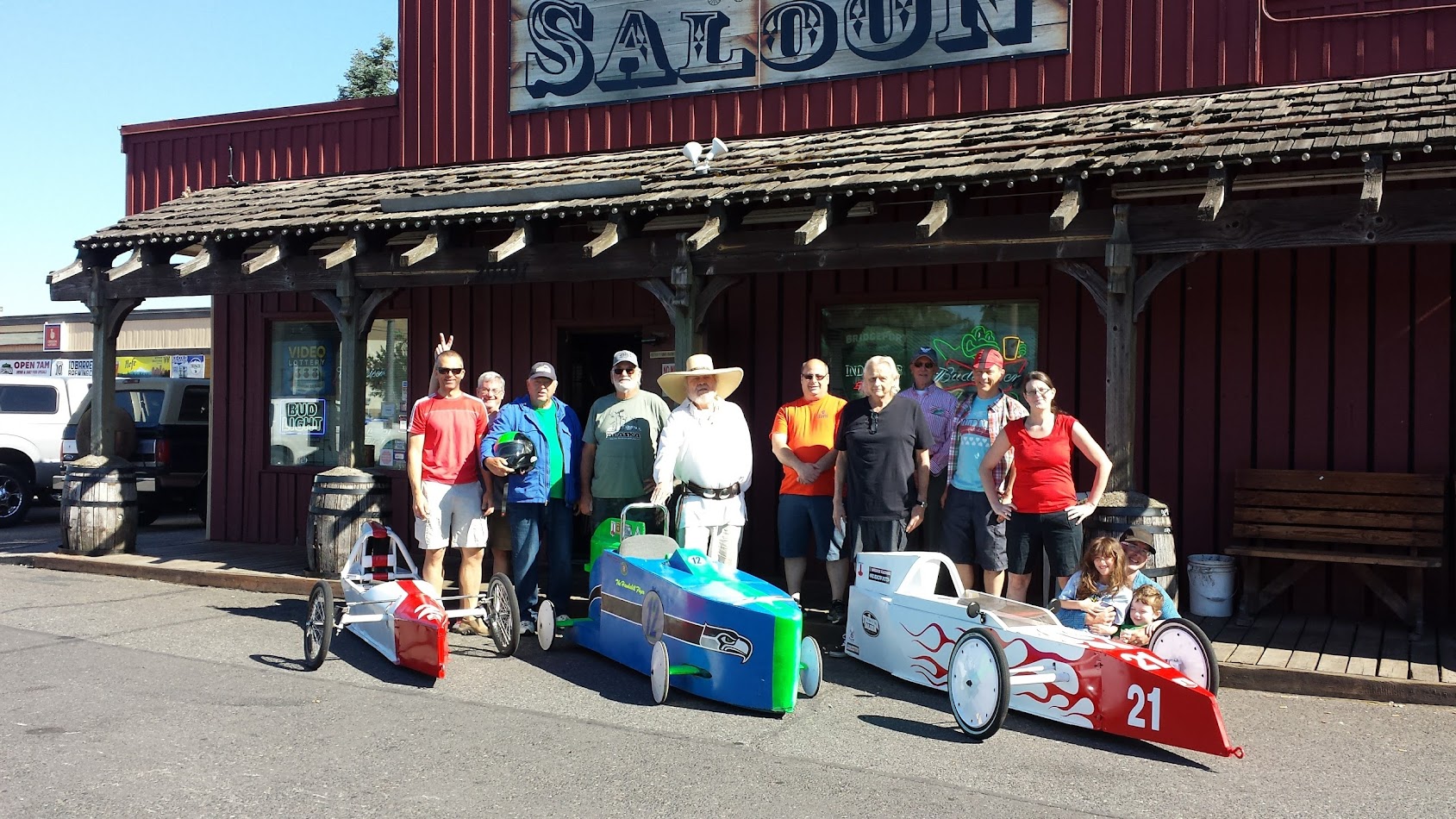 Did some testing to validate our running configurations (wheel discs/pants, canopy/open cockpit, etc...). I ended up with this as my final configuration: 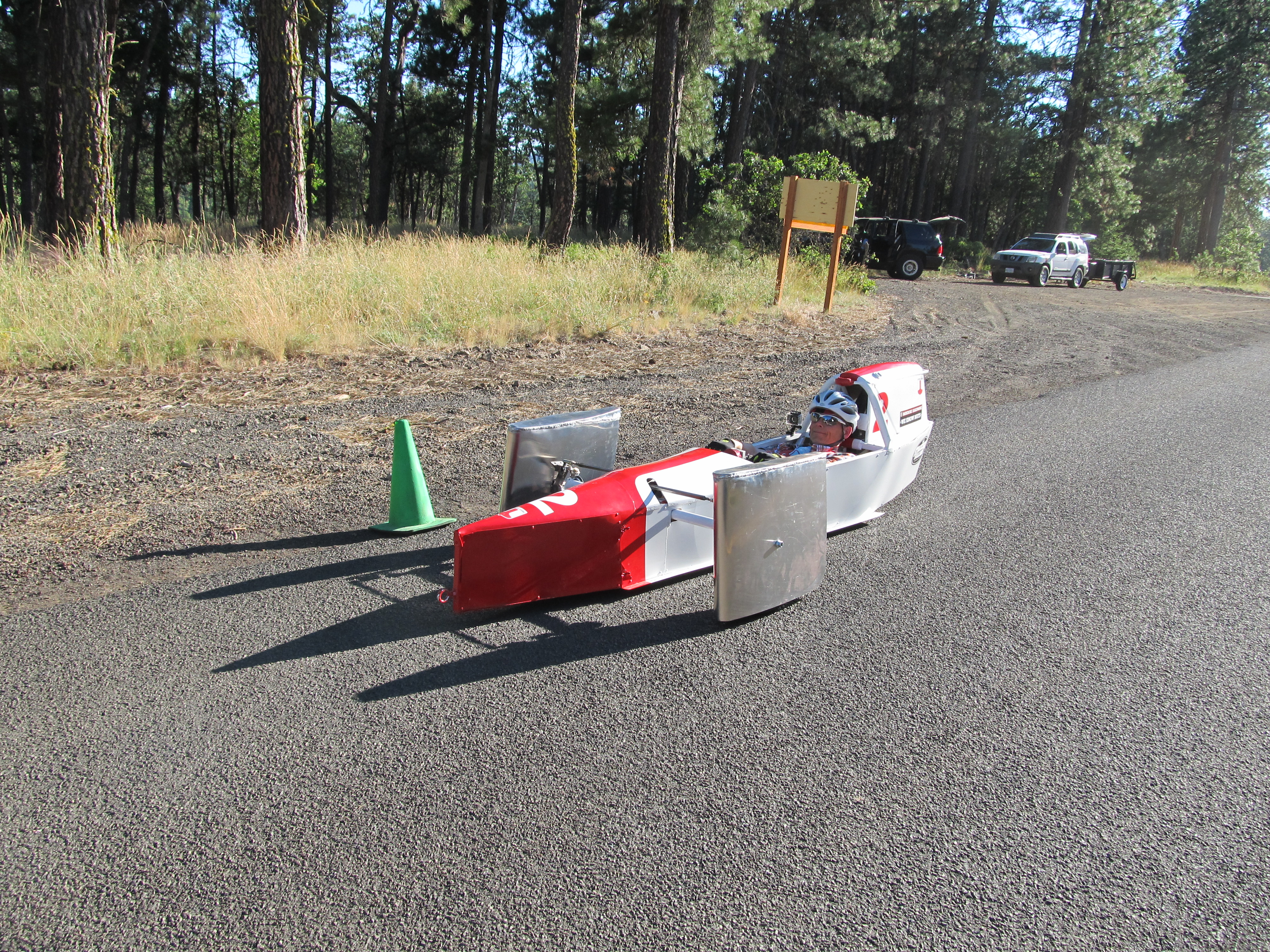 After testing was all over, we went back to the big hill for a 14.6 mile run:

It's a little bumpy on the top part of the course, but it's worth the ride to get to the sweet stuff! What a blast!

It was a very long, hot, sunny summer day, and we stopped on the way home for dinner at an excellent river-side restaurant in a pokey little town. To our pleasure, it was an excellent meal on a fantastic evening with good people. Great times!

The derby is 18 days away... If you're in the neighborhood, come on by!

Staff member
Admin
Lifetime Supporter
Amazing little machine!
A couple of questions -
What was that scraping sound?
Realizing that weight is the enemy, I would sure be tempted to put some sort of suspension in it. Something along the lines of splitting the front axle at the center of the car, mounting each side to a pivot/bushing and then add a single cantilever spring between them that was mounted (captured) in the middle...
Is this against the rules or?

Thank you sir! It's quite ridiculous. I've topped out at over 60mph, and can consistently run in the 40's and 50's. The car absolutely floats and flies!


Big-Foot said:
What was that scraping sound?
Click to expand...

Honestly, not sure. Wind noise? It might have been the camera vibrating in the case or something. You can just hear the rotor running slightly warped through the caliper right at the beginning of the run. It's quickly overwhelmed by the other noise though.


Big-Foot said:
Realizing that weight is the enemy, I would sure be tempted to put some sort of suspension in it. Something along the lines of splitting the front axle at the center of the car, mounting each side to a pivot/bushing and then add a single cantilever spring between them that was mounted (captured) in the middle...
Is this against the rules or?
Click to expand...

For gravity cars, weight is your only source of energy: from physics... mgh = 1/2mv^2, i.e., the more you weigh, the faster you can go by the bottom. Weight does take effort to accelerate though, and that's the thing we need to balance- acceleration with top speed.

As for suspension, we are running super low ground clearance. I am afraid the spring rates to effectively manage wheel travel over our limited travel would be fairly rock solid and not worth the effort. The course for the actual event is fairly super smooth, so I am not worried about it. None of the fast guys run suspension, but others are designed to be much more flexible that ours- more like a go kart's planar chassis which allows significantly more flex. I went for super-stout and built ours like a Lotus 7 frame, except no motor, trans, driveline, cooling, electrics, etc...

I also must say, I am very happy with how the Mk II (the one I am builing for my buddy Bill) came out as well. Another friend is a hot rodder and Bill authorized him to flame the nose in a Scuderia Kouba-appropriate color scheme. I think it looks AWESOME!: 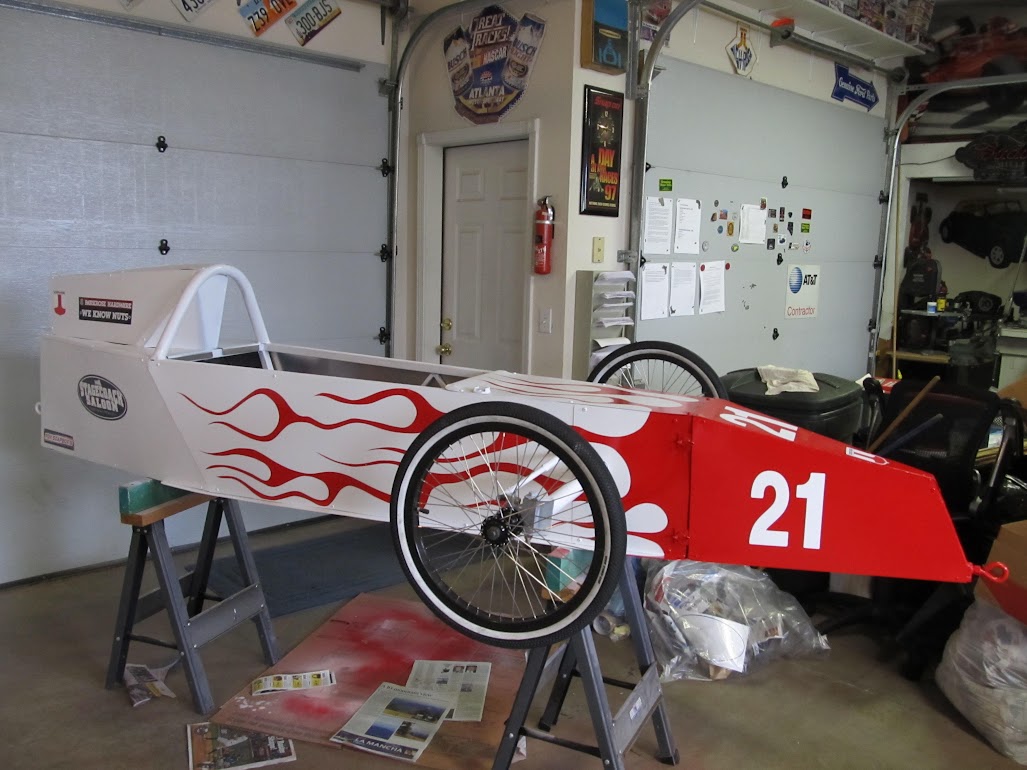 Staff member
Admin
Lifetime Supporter
Thanks for the explanation Chris! Good luck in the big event -- please post video if you can!

Supporter
So, it was a pretty successful day yesterday. I posted this on my slot car racing forum because those are most of the degenerates who helped me get here, but I thought I would post the same update here.

It was a good day!

At the finish line with my VERY supportive wife: 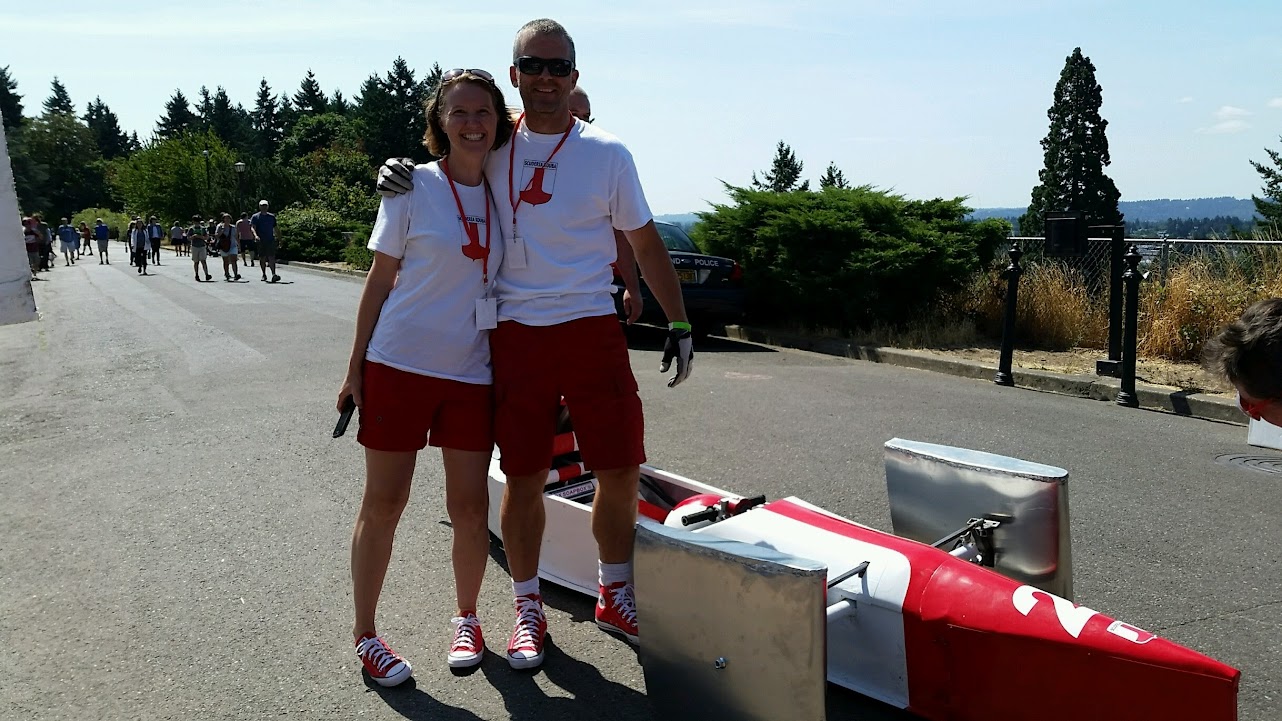 An earlier heat, from Jeff Burns: 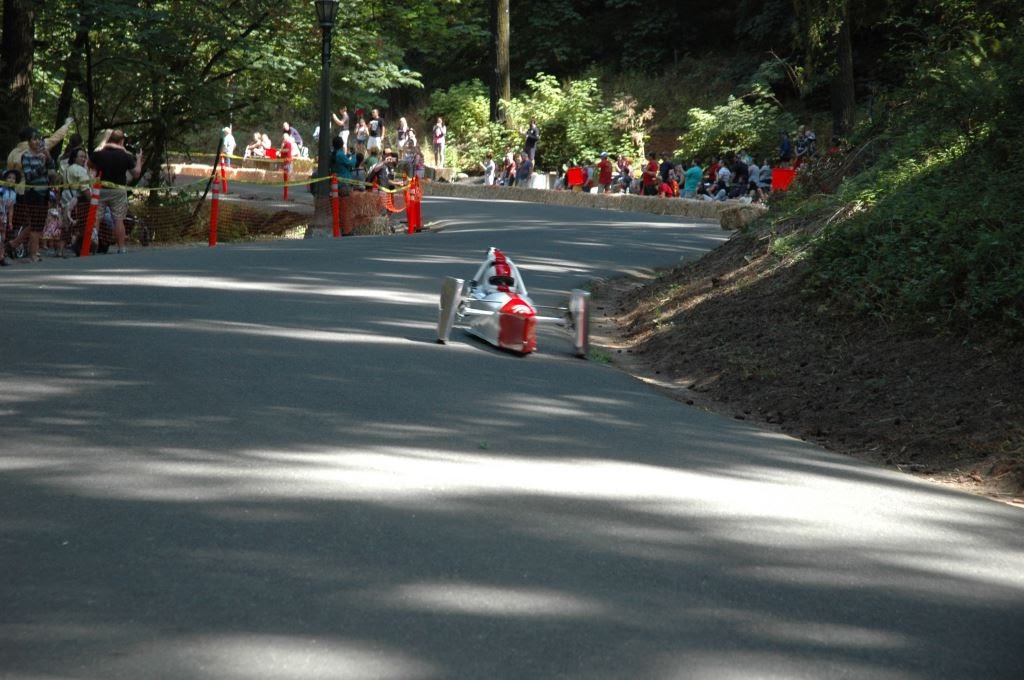 Scuderia Kouba had three cars entered, and all three cars did do extremely well, with all of them earning spots in the finals. Dennis won his first round final's heat but had his off in the semi's. For my semi-final heat, I was lined up with two random others, one of which blew a tire while just sitting on the start line. They then pulled Jenny Burns in the MkII up to replace that entry, so one of the Scuderia cars wasn't going to advance that round, and it was her... I grabbed victory in that round and waited for the final to see who showed up.

It was that gorgeous canoe car and the third place winner from last year. This was going to be interesting.

With the performance of all three cars, I figured whoever lead into the first corner was going to have a massive advantage, and whoever lead into the Learning Curve was going to take the race. For this, I owe it to my pusher, Michael Davis, who gave me fantastic starts all day. What did he look like in action? Check out an earlier heat from the push cam (didn't capture the final heat):

For the final heat, he got me out ahead of the others into the first left turn, but the canoe car made up a little ground going into the right. I saw his nose move up along side of me, but I stretched it out into the next left hander with a shorter line to the apex. This got me far enough ahead to drift out onto the main straight and hope that I had enough of a lead. Howie got this from about halfway down the straight:

Turns out, it was EXTREMELY close heading into that final turn. Someone else sent me this slow-mo video of our two cars nearing the turn in for the Learning Curve:

In the first 4 seconds of the video, you can see the nose of the canoe car within ~18" of the tail of the car- about halfway up the pushing tower we added for the start. We were that close(!), BUT I WAS IN THE LEAD. Louis in the canoe car was going to have to drive around me, and would scrub off energy trying to do so... At the line it looked like this:

In the end, it was their closest finish ever, and THE FIRST TIME A ROOKIE EVER WON THE EVENT! Don't me wrong, I wanted to win, and I was aiming to win, and made all my plans to win, but in no way did I ever actually imagine we would pull it off.

To top it off, although she didn't make the finals, Jenny was the fastest in the Formula 8 class and took home the trophy for that. Check out the hardware!!!!: 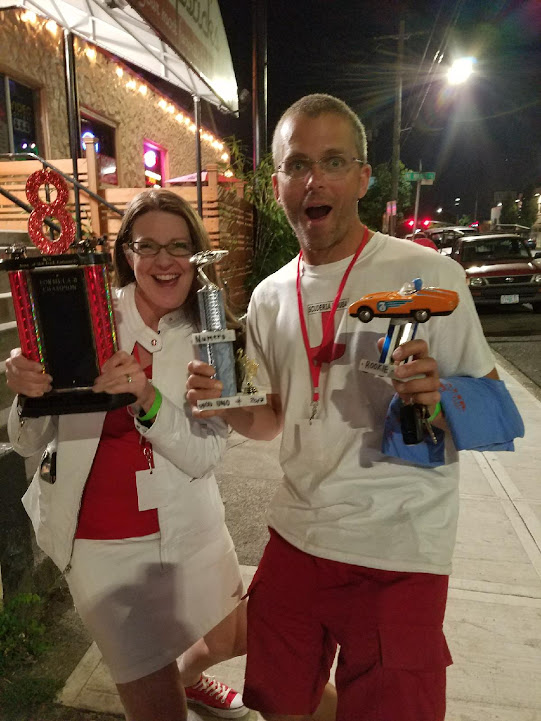 Jenny with the Formula 8 trophy, me with the Numero Uno and Best Rookie trophies

A MASSIVE THANK YOU is due to everyone who helped get me (and Jenny and Jeff) up to the starting line and down to the finish this year. I can't tell you how much fun I had and what a blast it's been. I will also give a specific thanks to "Downhill" Bill Bostic for being the glue that held the team together. I can honestly say that without his time, effort, energy, and enthusiasm, I'm not sure we would have even gotten entered in the event. Next year, you need to RUN in the event!!!

I also want to specifically thank my wife Bethany for supporting the 12 year old within me, and allowing Bill and Dave to come over and play in the shop on Thursdays, and for all the evenings she got to spend without me while we played and tested.

THANK YOU B, BILL, and EVERYONE ELSE!!!!

Passing by on the course:
2017 Portland Adult Soapbox Derby - Car #2 fly by - YouTube


What a great time!!

Congratulations on the win.

Of course that means you now need to repeat that next year with the better and faster model!

Supporter
One of my favorite pics from the event which I've seen so far, this is the start of the final heat:

Supporter
A few additional pics have popped up on the internet: 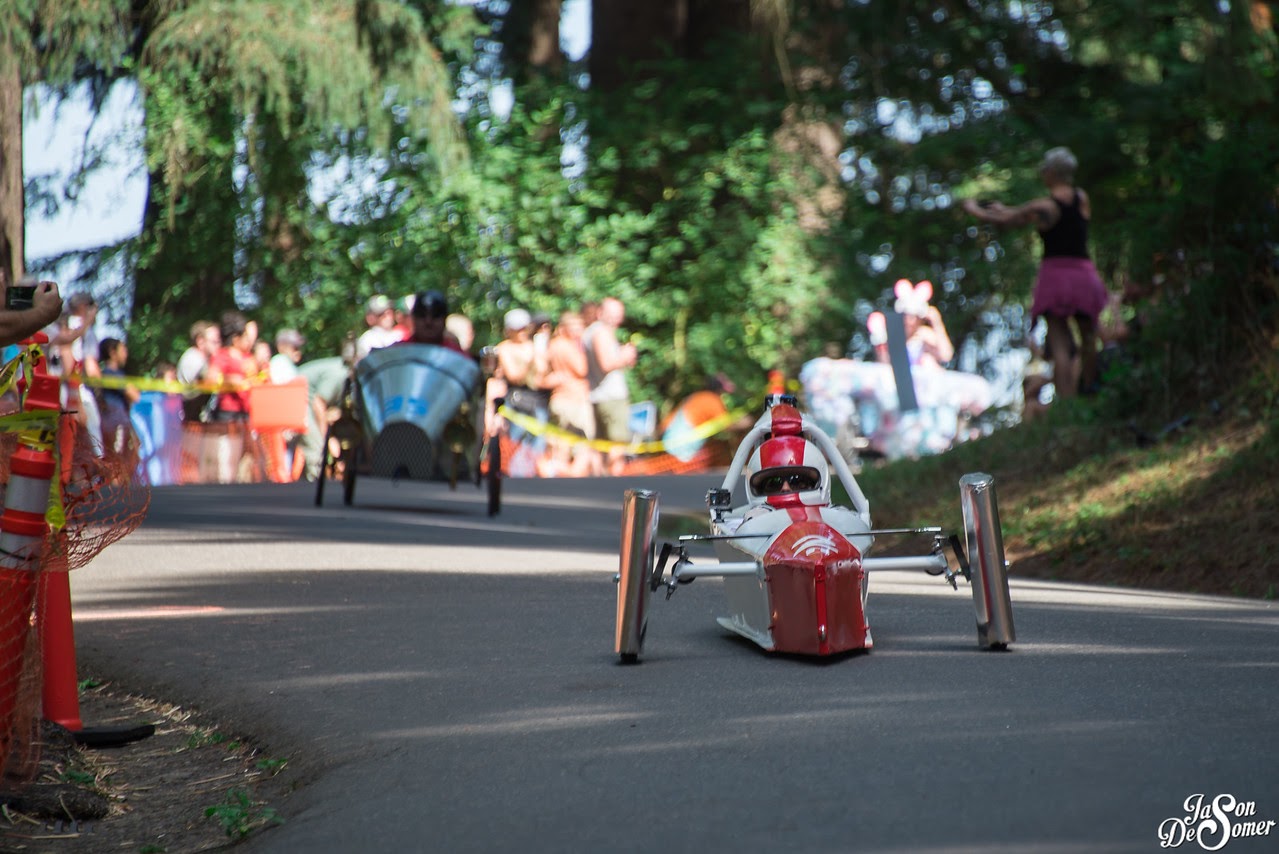 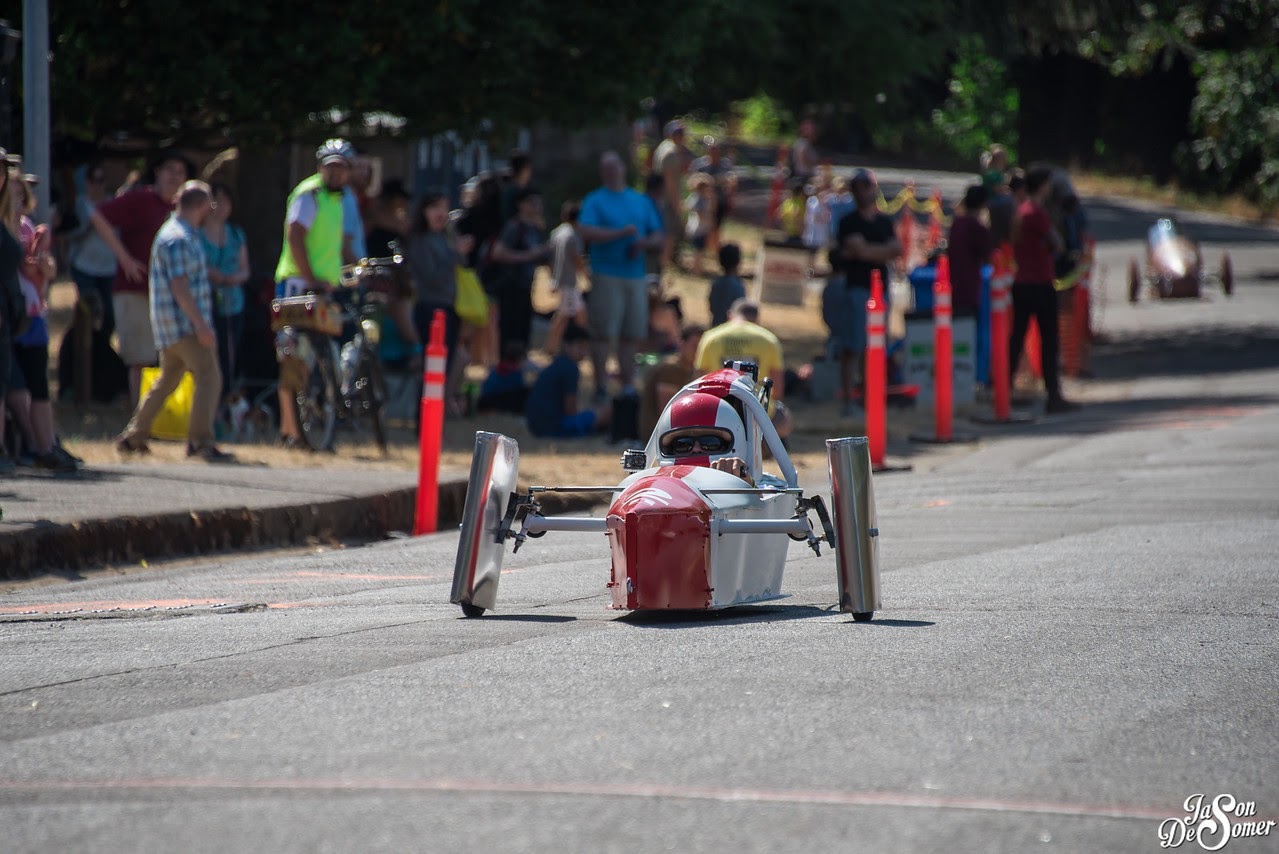 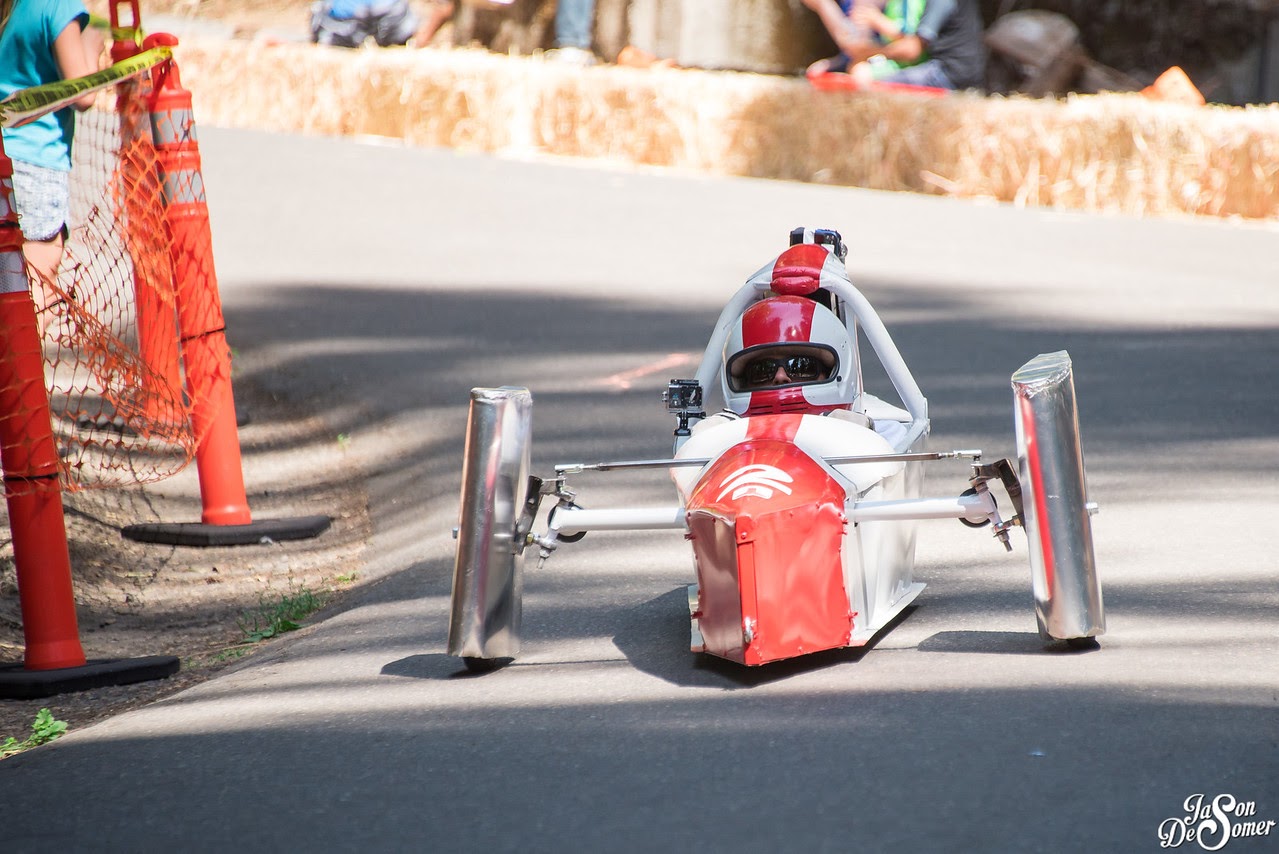 My semi-final heat, leading the Mk II into the big corner at the end of the course: 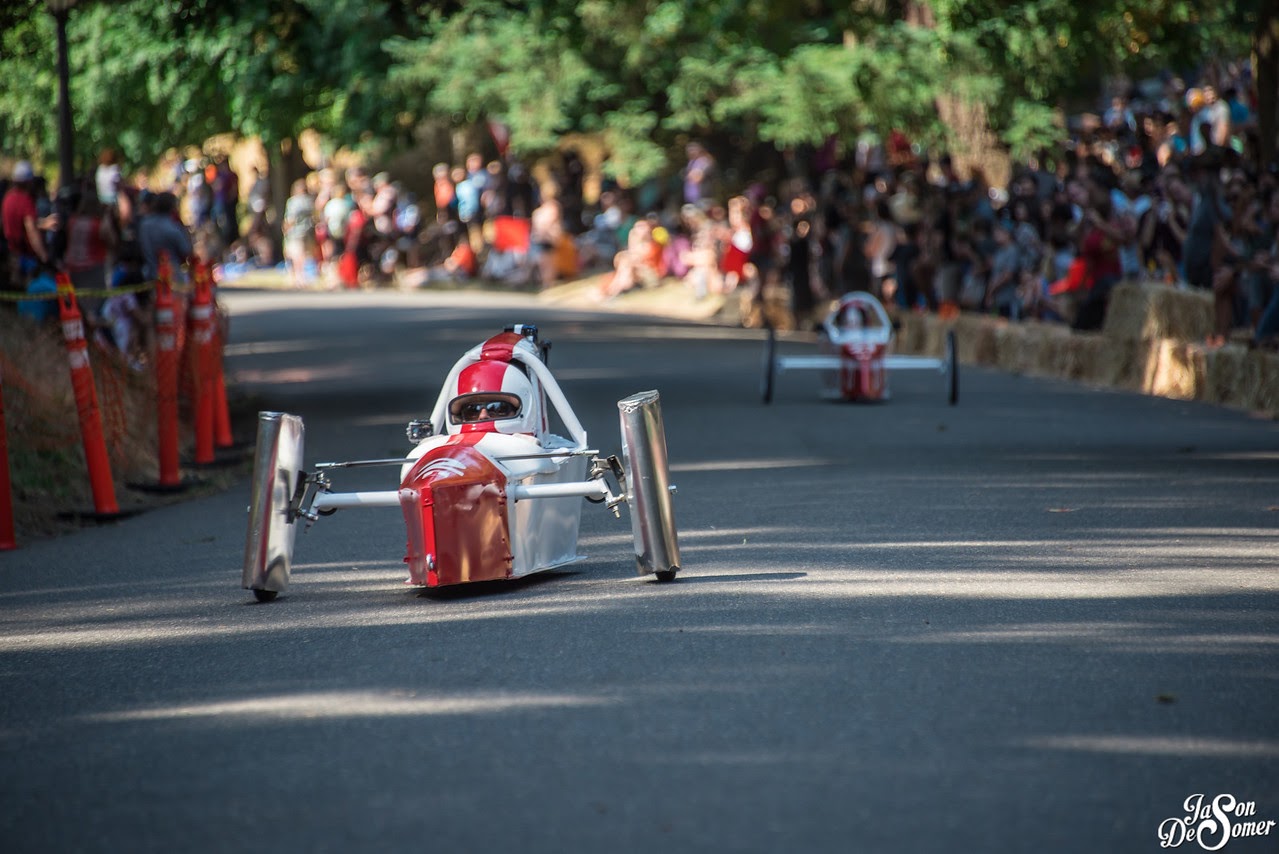 The start of the final, getting out in front of the eventual second place finisher in his gorgeous cedar strip entry: 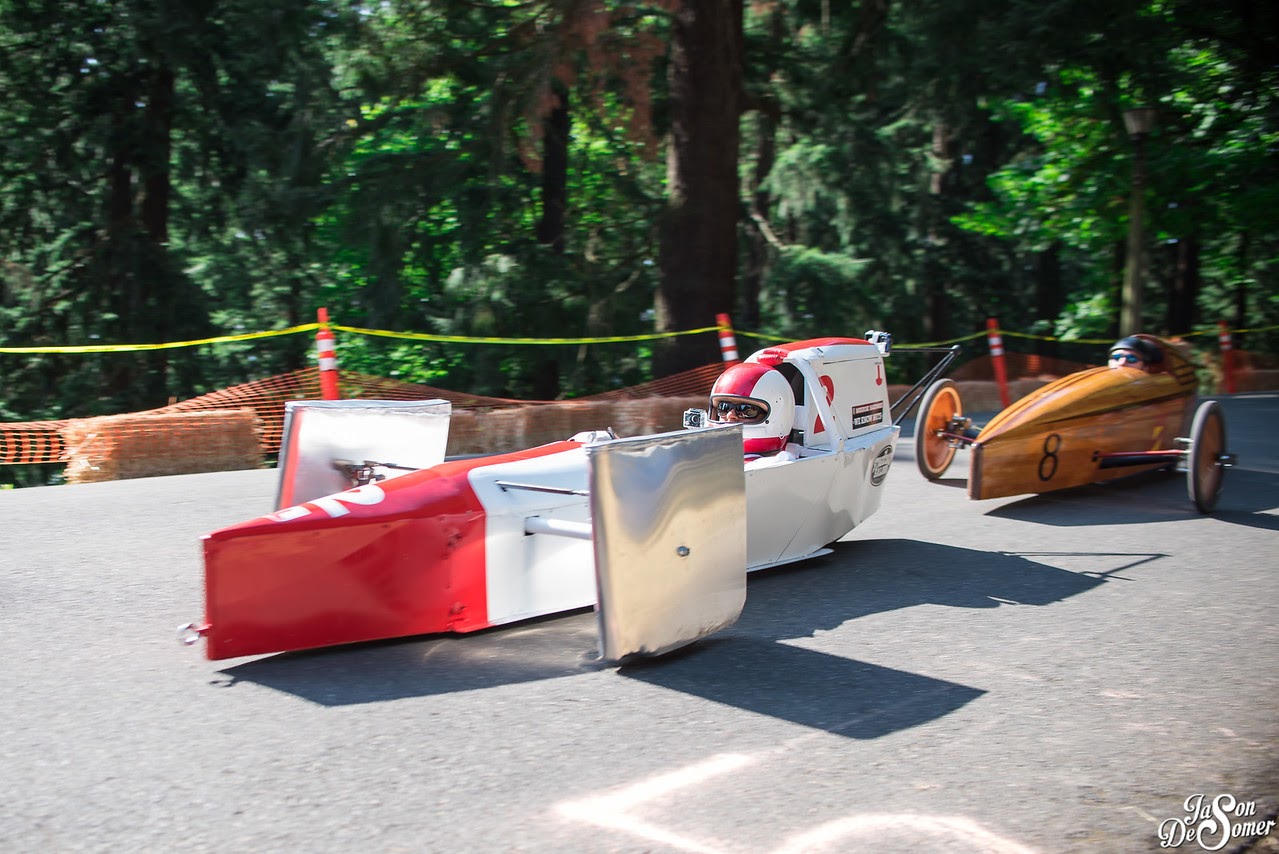 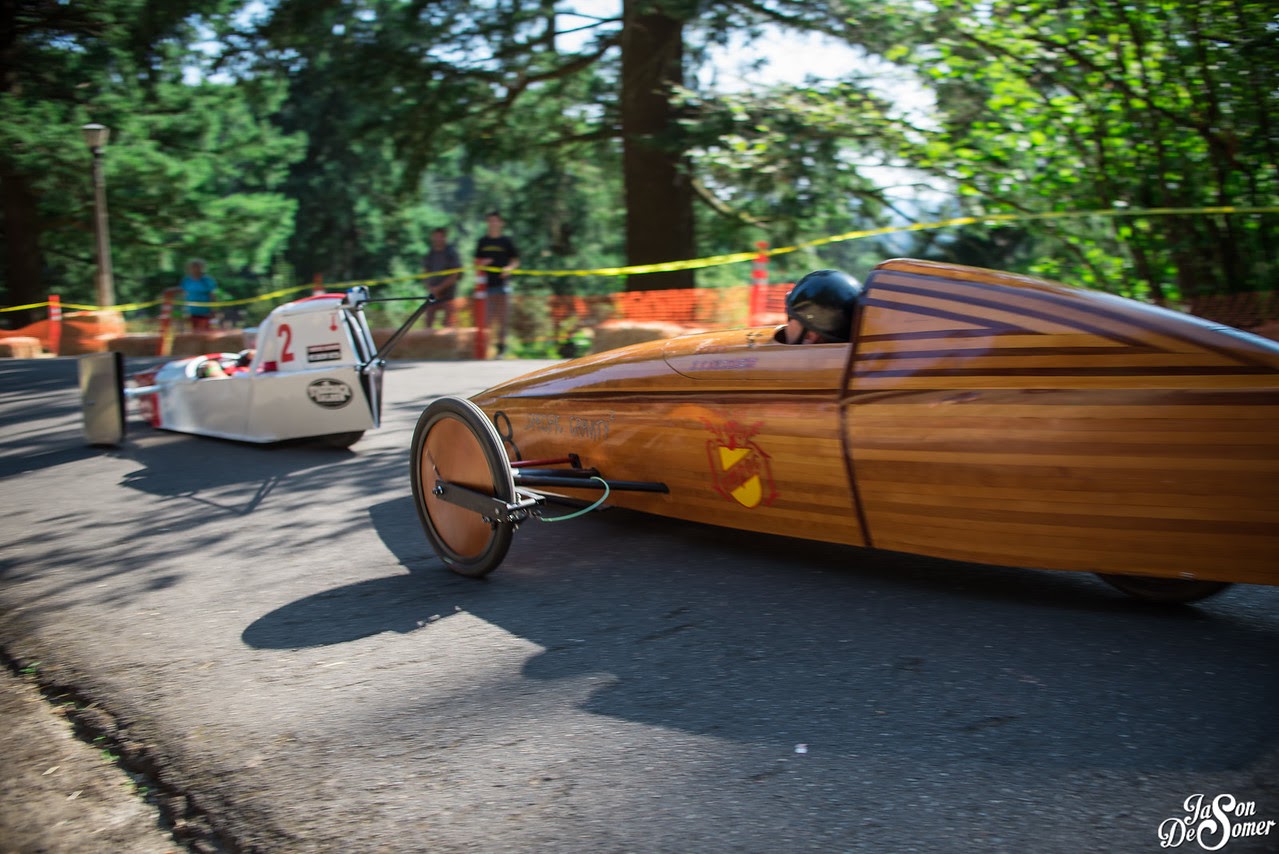 Staff member
Admin
Lifetime Supporter
I must admit that the wooden rig is quite fetching.
Here is where you really learn how important drafting and technique are....
What a great experience for you!

Big-Foot said:
I must admit that the wooden rig is quite fetching.
Click to expand...

It's even more gorgeous in person! Super nice competitor and super slick entry. He's run it for a number of years now and it has the right amount of patina to let you know it's a serious entry but that it also values aesthetics as well. Not a show queen but a great-looking runner!


Big-Foot said:
Here is where you really learn how important drafting and technique are....
What a great experience for you!
Click to expand...

And more specifically, the start- where we get a 10 yard push. My pusher got me out in front of both of the others in the final, and without a motor, that's pretty much battle over. Whoever got to run their racing line was going to win while the others scrubbed speed off while trying to take alternate lines around the leader. The car in third place was way behind at the beginning, but ended up almost getting second (lost by half a car length?) because the cedar strip entry wasted so much energy trying to get around me.

It was a fantastic day on the hill! Looking forward to next year already.

Staff member
Admin
Lifetime Supporter
The pusher thing is where the competition gets lopsided then....
Perhaps start the race from a platform like SoapBox Derby used to do?

Big-Foot said:
The pusher thing is where the competition gets lopsided then....
Click to expand...

The second place car's pusher looked like he could have been picked up from an NFL team. My pusher is in his late 40's and only reasonably fit (hikes, exercises, nothing crazy...), doesn't carry nearly the muscle mass of the other guy. But we executed with precision.

That team has competed numerous times with that car and should know what they're doing. I didn't see if they goofed the start up or how we got even with them so quickly- but clearly we did.

Our team hadn't run down the hill before, so we went to a local high school and used their running track to do some pushing trials, complete with GPS (speed) logging, cell phone video analysis, and a stopwatch to measure results. We ended up re-manufacturing our push bars (too lightweight), learning where the starter had to back off to not over-run the push box, and setting up starting blocks for the pusher to push off... basically completely worked through the start process. Looking at that photo (and based on the haul of hardware), it clearly paid off.

All through the event, my runs were extremely consistent. Six times down the hill, ET's from 76.5s to 75.04s over a .7m course. Top speeds were 43-45, with one outlier of 48mph. I think that's remarkably consistent and a great job for a rookie venture down the mountain.

Yeah, we're a bit like the kid at school who wants to win recess, but I loved the process of extracting max performance from within a set of design constraints and if we're going to go through the effort, why not aim to win?
Last edited: Aug 30, 2017