I agree Rick. These are the same fans I'm using, and cooling in S-and-G traffic has never been an issue. With that said, I've made mine where the shroud (with fans attached to shroud) can be removed in five minutes for track days. I learned the hard way to remove the fans for track days due to high-speed air forcing the fans to over-speed and self destruct. Nearly ruined a custom radiator when the blades grenaded. Anything above 25 MPH keeps the engine cool without fans. I hadn't realized air moved through a radiator that efficiently or quickly.
Last edited: Sep 6, 2018

Big-Foot said:
Would like toknow more about those fans and if they’ve ever been used to cool a radiator yet! Very interesting!
Click to expand...

These are TA600DC 12V 2A industrial cooling fans made by NIDEC, model A3405-29. Each fan is 6 3/4" diameter overall and weighs 21 ounces (595 g). The fans each have a 245 CFM free-flow rating but "free-flow" ratings are meaningless, what matters is the air flow rating against the backpressure of the air flowing through the radiator. Most cooling fans do not show curves for CFM vs backpressure but these fans are supplied with those curves. If I knew the pressure drop across the radiator I could know the fan's true air flow.

I originally bought a huge radiator cooling fan to use in this project but the motor turned out to be too tall to fit under the nose. These fans were a solution to my limited space problem. I think your GT40 has more room than I do for a taller fan motor.

I have not seen anyone using these industrial fans to cool a radiator.

One note- these do look a little like the fans in a computer but they are much more powerful.

Neil, See above link for specs... Overall height is only 3.73" not too bad considering that they are very powerful for a small fan. I think that your fan setup is cool looking (because it is an original solution) and if your car is primarily a track car then it might work out well but if you need additional cooling power you might consider the Spal fans. I know that some of the Winston cup cars used them as well. They can be quick release if you use 4 bolts (as pins) and 4 springs to hold them in place, simply twist 90° and remove.

Terry, I can say that I have forgot many times to turn my fans off when at the track but I have never had a failure. I really like these fans and they will cool 600+ hp with AC on the hottest day, of course really only cooling 200 to 300 hp on the street.

Attached is a picture of my GTD GT40 (sold it) with the Spal fans that my link points to, when you turn them on the car moves forward a little.

Supporter
Thanks, Rick. It is good to see that SPAL publishes CFM vs backpressure data. I see that they have a series of 10" fans too. I'll need to replace the 10" fans in my street Manta Mirage since one of its original two fans has stopped working.

Supporter
Check these out, run search for them and see what you think. These are the most CFM per dollar I could find in a relative small diameter fan.

Also these, they seem to be the same thing as the SPAL but 50 bucks cheaper.

Supporter
Thank you, Howard. That Mishimoto fan looks like a winner.

Supporter
We are back home in Tucson after running in the World of Speed at Bonneville. This is a very much smaller event than Speed Week but the weather is cooler and the hotel room rates are not exorbitant. We had a problem with a bad diesel fuel leak on our tow truck on the way and had to leave it with a Dodge dealer in Henderson (Las Vegas) to fix. To continue, we rented a pickup from U-Haul and transferred all our gear and the trailer to that. In tech inspection, they wanted me to isolate the fuel cell filler cap from the cockpit and vent the fuel cell overboard. Fortunately, a fellow wearing a yellow “Team Vesco” tee-shirt stopped by our pit and wanted to help. He borrowed some aviation tin snips and a hose from Rick Vesco and, with the Ace Hardware sheet metal (three flattened stove pipes), we passed tech inspection.

Joline towed me around to the staging lane for the short course and after a wait I was able to run. Embarrassingly, I promptly stalled the engine. Re-started it and ran through first gear, shifted into second, and at about 5,000 rpm the engine started misfiring badly so I turned off the course. Whatever the problem was it wasn’t going to be solved until we returned home so we packed up and left Monday morning. I posted a video on YouTube that pretty much says it all: The engine really didn’t sound quite right from the beginning. I’m going to see if maybe I have a fuel filter blockage since it felt like a fuel problem... I’ll see what a teardown reveals.

Supporter
I found this photo on the USFRA website. 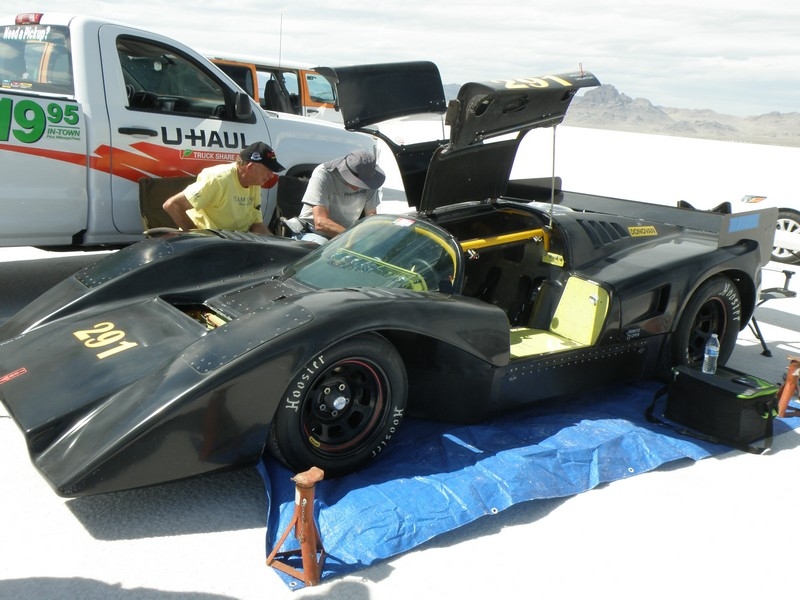 Staff member
Admin
Lifetime Supporter
Be proud..... You made it to the famed Bonneville Salt Flats and drove it! Next time, it will be different I’m sure....
Car sounds wicked!

Neil
Is there a way to test your car for basic on the road performance before the events? Maybe one of those organized 'mile' contests? Plenty of empty roads and vacant runways in Arizona

Supporter
Those "empty roads" are not empty of the Highway Patrol & Sherrif Dept; the runways are controlled by the FAA. I'm looking for a place to do some testing. BTW, the Nevada Silver State Classic open-road event was going on the day I ran at Bonneville.

Ooops This was their last year, sorry. But something like this would work for you …...right?

Here's two. One in Colorado and another in Texas.

Supporter
Thanks, Howard. I am aware of those venues.

Towing my car hundreds of miles for testing is pretty much what I did at Bonneville (1800 miles round trip). I need to find a place that is relatively nearby, it probably wouldn't allow a maximum performance test but it might reveal potential problems or little things that need attention.

Staff member
Admin
Lifetime Supporter
Neil,
I’d give Gordon Levy a call up in Maricopa and pick his brain on a place to test...
I need to get down to visit you this winter...

Do you have Gordon's phone number? He might have some suggestions that would help- thank you. Winter is not too far away but you are welcome anytime.

I live in Gold Canyon most of the year. Only in MN for 5 months of nice weather...

Supporter
I ran my car at the World Of Speed event at Bonneville in September. After getting through tech inspection I ran on the short course but hurt the engine so that was disappointing but at least I did get to drive a car that I built by myself on the "Hallowed Ground" of Bonneville. I'm getting ready to tear down the engine to see what it looks like internally. One thing I found was that a 100u fuel filter ahead of my electric fuel pump is not 100u, it is 10u! That, together with the 4200 ft altitude was causing fuel starvation.

Supporter
I hurt the engine at Bonneville and there is now an unhealthy sound when I crank it over. Time to see what is the problem.

I finished pulling the engine and transaxle out of the chassis this afternoon. Now to unbolt the transaxle and set the engine on an engine stand, drain the oil, rotate it upside down (after removing the lifters), pull off the pan and look inside. Any bets as to what I'll find?