Supporter
I fired up the engine yesterday, let it warm up, and adjusted the new Proform 850 Racing Series carburetor idle mixtures and idle speed. I had an intake manifold vacuum gauge connected and it showed 11 inches of mercury @ 1,000 RPM idle. This sounds reasonable since I am running a Crower 00427 mechanical roller cam, 290 degrees intake (advertised) and 260 degrees @ 0.050 lift.

It sounds good and the throttle response is very crisp. Far better than the old Holley.

Supporter
Last year at Bonneville "World of Speed", tech inspection did not like the location of my fuel filler cap and tank vent; it was considered to be "in the cockpit" so with the help of a friend, a few borrowed fittings from the Turbinator guys, some pop rivets, and a few lengths of thin stovepipe from Ace Hardware in Wendover, I "walled-off" the cockpit from the fuel filler & vent. The flattened-out stovepipe ran all the way to the top of the roll cage but there was zero visibility out of the right side window. Not good- but OK for a temporary fix.

This week I removed all the thin sheet metal and fabricated an isolation panel out of some scrap 0.080" 5052-H34 aluminum that I had. I riveted an extruded 2024-T3 right-angle piece to the bottom so that it could be fastened to a chassis tube. Another piece of aluminum is fastened to the top of the panel using 5 right-angle floating captive nuts. When the door is closed , it seals against a rubber strip on top of the outer edge of it. I still need to complete the caulking (3M 2000+) and install the rubber strip.

Time is getting short....

Supporter
Today I finished the panel to isolate the cockpit from the fuel cell filler & vent. It seals against the lower lip on the upper door when it closes.

Neil how did it go at the salt a few weeks ago , very well I hope.

Supporter
Thanks for the interest, David. It did not go well at all. I had a problem in tech, my helmet was not completely below the top of the roll cage. It was about 1/4" too high, even with my scrunching down as far as I could and even with modifying the seat as much as we could in the pit. It was clear that I'll need to fabricate a whole new seat that will allow my butt to move a bit forward so that my helmet will be lower. (the latest SFI-certified helmets are larger than the earlier ones) My friend Wayne Ludington and I had done all we could so it was time to pack up and head home.

My thanks to Jeff Nish and Rob Freyvogel who both loaned me their spare helmets to see if they would help. The USFRA loaned me an SFI-5 firesuit that gained me a little over my thick SFI-20 suit. Thanks to everyone who helped.

BTW, on the drive home, shortly after leaving, we were listening to the low-power AM radio broadcast from the event when Rob Freyvogel's streamliner started a run down the salt. Sometime after the two-mile mark he crashed at 432 mph. It was a horrific crash as you might suspect from that speed. The radio faded out but I found out later that the car was destroyed but the roll cage was intact and Rob survived but he was airlifted to a hospital in Salt Lake City in critical condition. His CT & MRI scans showed that is most serious injury was his head trauma. He is currently still unconscious but stable. His wife Sue is with him but they are facing a very long recovery. Rob is a friend and I pray for him and his family. This is a picture of Rob's streamliner when we were in "Area 52" in Nevada a couple of years ago.

Staff member
Admin
Lifetime Supporter
Very sorry to hear about your friends wreck on the salt! I hope he makes a full recovery and that they find/remediate the cause of the head trauma...
—
On your roll cage - Will they accept a main hoop modification similar to the main hoop on an SCCA Spec Racer Ford?
SCCA requires that the top of your helmet be 2” below the plane of the top of the main hoop and the next closest cross-bar / hoop... 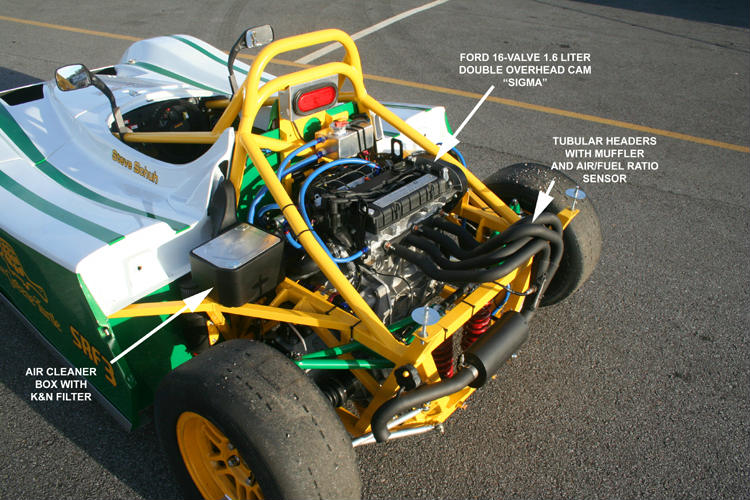 Supporter
Yes, but being a coupe, the bodywork would need major changes.

Staff member
Admin
Lifetime Supporter
Ah, I forgot yours was a coupe... Dropping the floor an option?

Supporter
Randy, its ride height is 3" front and 4"rear. There simply is not any room to drop the floor. Good idea, otherwise.

Staff member
Admin
Lifetime Supporter
That’s a pretty low ride height Neil....
Possible increase in ride height by an inch, drop pan for the seat and recline the seat? You could make up for the ride height increase with heavy poly plastic on the bottom of your splitter...
Are your front lower control arms level to ground at ride height now?
——
Just looking for potential options for you...
You would not be the first driver to ditch seat padding and bolt the seat to the floor in order to pass tech... Snapping the padding back in after tech is totally your call...

Supporter
Yes, it is low... but it isn't a street car. I don't want to disturb the air flow under the car because I need the down force. A drop pan would seriously reduce the airflow compared to its current flat bottom. Here is the current underside. The picture was taken during construction. Reclining the driving position seems the best approach.

Maybe a type of Gurney bubble in the floor would get you down enough.

Supporter
Check my response to Randy a few posts ago, David.

manta22 said: "The swing arms I made were a little too flexible so I cut some 1/2" square steel tubing and inserted two , one inside each edge, and riveted them in place. This stiffened the assembly considerably and the shift motion feels good now."
Click to expand...

Mesa: "Looks like you were originally trying a little to hard to 'add lightness' Is weight as critical on LSR cars as it is in other forms of motorsport?"

Mesa was right. I thought it would be easier to cut the swing arm shapes from lighter gauge sheet steel but that was not stiff enough in bending.

After a number of shift cycles, that approach was not satisfactory after all- those steel arms were too thin and even after being reinforced it started to flex. Back to the drawing board- or the stash of surplus stuff.

With my little hobby bandsaw, I cut two new swing arms out of 1/2" 6061-T6 aluminum plate, made a 3/4" hole in one and a 5/8" (nearest to 14mm) hole in the other using aircraft counterbores. They cut a nice clean hole that is also pretty accurate. I drilled and tapped two 1/4-28 holes in each to act as set screws. On the opposite end of each swing arm I drilled a 3/8" hole for the link bearings.

From somewhere I had bought a few odd tube ends that had ball bearings staked in one end and the other end was bored 3/8"- a perfect fit for a 3/8" spherical rod end bearing that I had. Clean both the made threads and the inside of the hole, apply some good ol' JB Weld epoxy and Voila!- a nice link for connecting the swing arms.

The G50 shift rod moves in and out as well as rotates and the rotation is opposite to the normal shift pattern, necessitating the link monkey motion. The G50 end swing arm needs to be able to rotate but be stiff when pushed & pulled. Since the G50 shift rod and the long shift rod are not parallel, there needs to be a bearing on the other swing arm that can accommodate rotation in two axes but also be stiff when pushed & pulled. A spherical rod end bearing does this nicely. I ground two small divots in the end of the long shift rod to prevent the set screws from slipping on the 3/4" Thompson ground & polished shaft. It has a hard 60C surface so set screws would not be able to bite into the surface otherwise.

Here are the latest shift linkage photos. I think this approach will be OK.

Lifetime Supporter
Supporter
Hi Neil
Looks solid enough and should work.
In picture 2 it looks like the left piece attaches to the gearbox shaft.
Could that piece not have been clamped 180 degrees around, pointing up, then you would not need the complexity you added?

That is a good observation but unfortunately the Porsche cast aluminum G50 rear mount crosspiece would interfere with shifting into 2nd and 4th gear. Extending the G50 shift rod wasn't possible due to interference with my parachute mount, bodywork stiffener, etc. The other alternative was to use another u-joint mounted in the shift rod swing arm. Its required geometry needed a comprehensive re-work of the linkage.

Supporter
I'm continuing my work on improving my shift linkage. One of the problems I have in smooth shifting the linkage is the forward link geometry. I had the shifter link pivot point located above its end that is fixed to the chassis. Moving the shifter from 1st to 2nd and from 3rd to 4th generated a downward force on the shift rod where it slid through the Thomson ball bushing. Conversely, shifting from 2nd to 3rd and from 4th to 5th generated an upward force. Moving the ends of the link to the same level reduced this quite a bit.

From examining the present shift rod, it is clear that the 3/4" mild steel tubing was not satisfactory. The surface was being indented by the small ball bearings in the ball bushing. Grooves are visible in it where the balls have rolled; this also causes rough shifting across the neutral gate. I will replace the mild steel tubing with Thomson ground & polished shaft. This has a precision diameter and has a vary hard 60 Rockwell C surface.

While I'm at it, I'll move the shifter & shift rod over about 2" to get it a bit further from my right thigh. This requires new mounting brackets for the two forward ball bushings, so I made two brackets by adapting two nice aluminum right angle brackets that I had in my surplus aerospace stash.

BTW, the four odd-looking orange "nuts" fastening the ball bushing to its mounting plate are called "Hy-Locks". These are prevailing torque lock nuts that have a narrow groove machined around their ends. At a specified torque, the hex end breaks off. This guarantees that they are tightened correctly and does not require a torque wrench.

Supporter
Regarding that second paragraph- here is a photo of the mild steel shift rod. The small ball bearings have indented the surface of the shaft, making the shifting rough, especially going laterally through the neutral gate. The ground & polished shaft with a surface hardness of 60 Rockwell C should cure this problem.

Supporter
I am now fitting my new shift linkage and need to put a few Rivnuts into my firewall to fasten the bearing mounting brackets. I can confirm that Inconel 718 is a bastard to drill holes in.
You must log in or register to reply here.
Share:
Facebook Twitter Reddit Pinterest Tumblr WhatsApp Email Link
Top