Admin
Lifetime Supporter
Bob - I think your solution is great.
I had built an oak framework out of 3/4” much like Dwights to support the sagging rear deck. That framework was also to be the mounting point for the 16g SS Shield I had planned.. I went looking on my old build thread here to post a link, but thanks to PhotoBucket’s attempt to HiJack the world of online forums, those embedded images were lost. I am attaching a pic here and can delete it if you prefer.

Thanks for that update. That is why I posted on this subject. You really need to think about heat before you finish the rear deck and paint it. Thanks for the photo. Of course the main problem is closer to the cutout for the "carbs" since that is where the hotter headers are.
B

The camera was mounted in the upper part of the rear deck at the very top but underneath the rear window. There is a perfect space there for the curved "tag cameras". I mounted a 25:8 wide angle monitor in the cockpit on the roof by the front windshield.

All of this worked ok at night before the rear window was installed. However, . . .

With the rear window installed and in the daytime, the reflection of the eight air filters on the rear window totally overpowers ANY scene behind the car thus making it totally useless. Wasn't I clever in finding that great spot to mount the camera so high up to give a great view rearward!

I could mount the camera with the included mounting bars that attach to the license plate. That would probably be too low to use as a rearview camera but it might work ok as a backup camera; however, I wanted a rearview camera.

I could do that; however the second unanticipated major problem was that the surface of the screen of the monitor was so reflective that in the daytime, all I could see is the reflection of things inside the cockpit and I really couldn't see the TV scene on the monitor. Double foiled...

What I needed is a non-reflective screen on the monitor. If you have noticed the surface of the Samsung TVs don't reflect whereas most other TVs are more of a glass finish and reflect the room. I need that non-reflective screen that is that 25:8 format IF I wanted to mount the camera on the license plate.

A sad end to a long journey. I wanted to post this just to warn others. I'm sure we will find a good solution someday.
W

Bob,
Just came across your pot on the rear camera. I knew that the higher the camera the better the view. I added a small Sony camera that is just a computer chip and a lens. It does however come with an accessory cable and port that allows you to alter 10 to 15 perameters of the camera. It is also a 1080 P camera and gives great pictures of what is behind. I mounted it on a piece of Lexan bent at 90 degrees and attahed it to the roof of the car just at the seam of the cabin and the rear hatch. I am sure that a small bump could be made that would house the camera and blend in with the body. The camera is only 1 1/4" square and the lens sticks out about 1". I also invested about $40 apiece for two small cameras that record and can be placed with gimbals to change direction while you drive. These all are products of the RC industry for the drones. There are sites out there like Hobby King and others that supply all you need for the cameras. One note is that these cameras run on 5 volts or there about. Some cam handle as high as 36 volts. Most of all the minature cameras have 5 volt requirements and can be set up as monitors and cameras at the same time(I think). You need to check them out. I also got one of the monitors from Tadi Brothers (https://www.tadibrothers.com/products/7-monitor-with-wireless-mounted-rv-backup-camera) 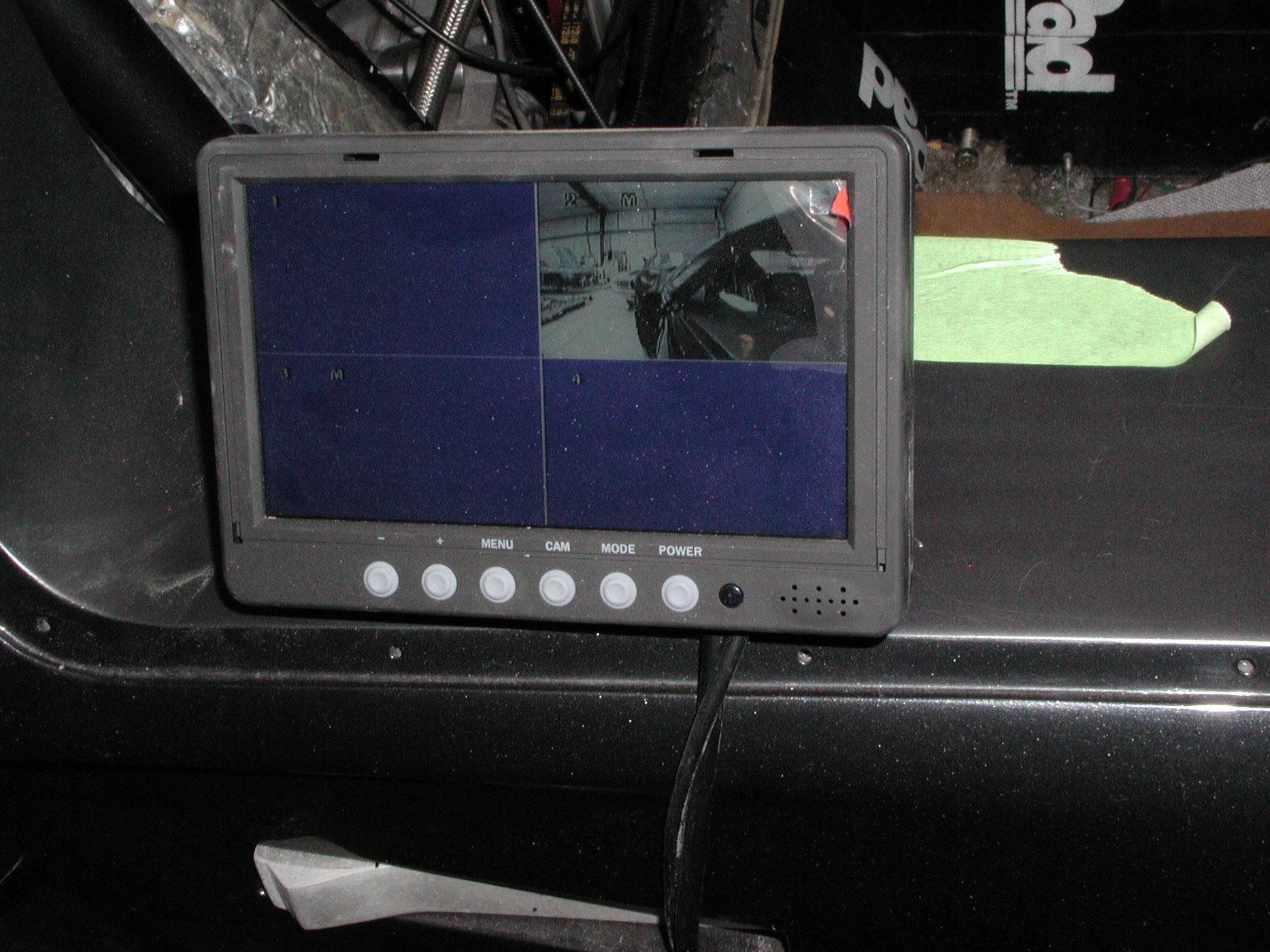 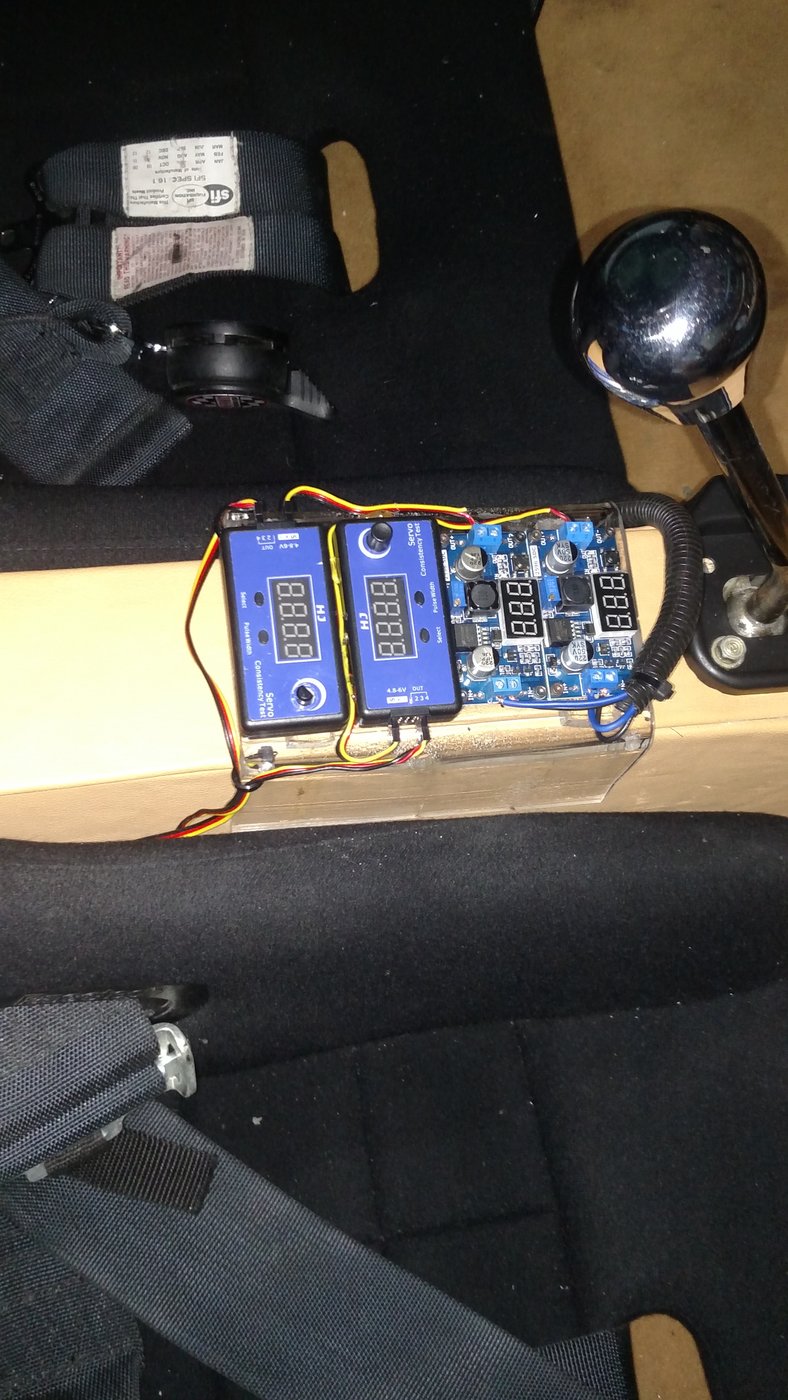 that will display several cameras at once. They were the only company with these at the time I bought mine. Mine is a 4 camera setup that will display one, two, or all 4 at one time. Some of the cameras are quite small but can be mounted in a fabricated housing you can do yourself. It is one of several company's out there now. My key suggestion if you go this route is to get one with a FOV of 90 degrees or no larger that 120. When you start getting larger FOVs the images you see will be quite small until they are very close. When I set mine up I wanted to incorporate the Sony unit into their wiring. I tested their wiring and found that their cameras also operate at 5 volts, so I spliced the camera into their harness and it worked very well. The monitor has since died and I need to replace it this winter. They(Hobby King etc.) have all the wiring and connectors that will make the system workable. I wanted to incorporate the matchbox cameras and gimbals(mounted on suction cup mounts) into the setup and was able to do it with step down transformers(2) for the two cameras and/or gimbals(12 volts to 5 volts). I also utilized two servo testers(https://hobbyking.com/en_us/turnigy-servo-tester.html?___store=en_us) that would allow me to rotate the cameras as I drove along http://i282.photobucket.com/albums/kk242/Billmusarra/P3200092_zpstf9zggp3.jpg. These are cheap items and cost $10-30. Several types to choose from. Just look around on the site. Be aware that these are tiny and can be fiddly to work with. If you want to talk about them drop me a line and we can hook up and talk about it.