GT40s Supporter
Trying to gather some information on this. Pistonheads doesn't have much which is surprising.

Admin
There is a goodly bit of transaxle info around here. Who makes the transaxle and what type is it? That might narrow things down a bit.

Lifetime Supporter
Clutch pack. Change your diff fluid. Be sure the fluid has a friction modifier for limited slip diffs. Mobile 1 75/90 LS and Redline FM + 75/90 synthetic are what I've used. Depending on the year there is a screen filter/breather. Hit it with a bit of brake cleaner to be sure it's not fouled. You can remove it but it's a tight area to work in. There is an o-ring seal on it that weeps and you'll see some more bleeding if you don't replace the diff plug copper gasket. But then again it's British... I got the bug after seeing the opening scene to the latest Bond Casino Royal. Great cars!

JeffYoung said:
Trying to gather some information on this. Pistonheads doesn't have much which is surprising.

There's quite a few UK Aston owners, but most of them are so rich they just toss the keys to an underling to fix things...they wouldn't know.

Have you just become a rich bastard too Jeff?

Admin
Cross posted from another forum Jeff and I belong to

Last week I had the great fortune to be offered a car trade – my Boss for an Aston Martin DB12 S while Mr. Young was away on business. It took zero time to sort out that this was a good deal for me so the deal was made, lunch was had at Cloos Coney Island, and I drove off in a 510hp V12 English hot rod, whooo hooo! 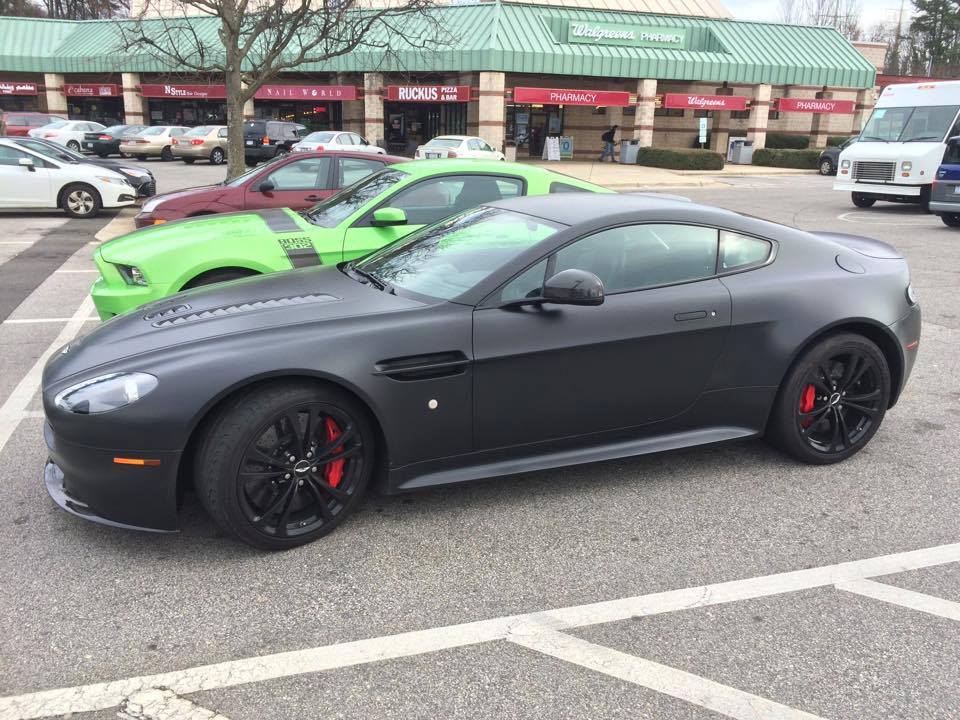 This is one seriously bad-ass ride. You can have your lambos, R8s, hot rod vettes, and all that riff raff, this car, the DB12, for me it is the only two-seat supercar that I’ve ever given serious thought to trying to procure. It’s got gorgeous looks and styling. Understated. Elegant. But muscular and purposeful. Imposing even, but not in an arrogant way. BAD ASS.

The engine is astounding. Not only because it is powerful but because it is so smooth. Fire it up and it has a race-car like bark, but it settles into an idle that is very seductively smooth and pleasing. Rev the motor, it has a growl, but under load at full throttle and with some rev, man, it sings and makes you feel as if you’re behind the wheel of a race car. A race car with a bespoke interior. Without hearing the engine you can’t tell it’s running, it is that smooth. Effortless thrust is a good description. It’s powerful, but not so much so that it overwhelms you and the car like say a 2012-2013 Shelby Mustang or I’m told the Dodge Hellcat does. The engine pulls smoothly to 7k and feels to deliver an exceptionally linear power band.

The handling and steering are mighty fine too. Very direct and honest. It corners pretty flat with the minimum amount of roll needed to have the suspension set and not be too stiff on turn in. There is a pretty fair amount of road noise transmitted to you via the tires and chassis, but that’s life with a supercar. I suppose some of GM’s magnetic shock technology might do it some favors in this department, but, it’d make a very honest car more complicated and that isn’t always a good thing.

Brakes, best brakes I’ve experienced on a street car. Carbon discs near as I can tell and they get the job done in a hurry. Good pedal feel, easy to modulate for what little I did of that, and quite linear. They squeak a good bit but that’s just them telling the world they’re bad ass.

The transmission and shifter are pretty good although the mechanism could use some shorter throws. And, something is going on with the diff and or tires, not sure what. It seems that when turning the car and trying to apply some throttle, even at 10mph and just a little bit of gas, the car loses traction in the rear and of course will step out a bit or have a hard time accelerating. It might be doing some one wheel peel on standing acceleration but I haven’t verified that yet but it feels like something is up. It’s difficult to exploit the engine in the first two gears as it loses traction so quickly, and while the engine is powerful it ought not blow the tires off as quickly as it does.

Driving the car is a wonderful experience. I’ve been using it as a commuter and it does pretty well for such duty. I’ve taken my daughther to school in it, out to dinner with the wife, shopping at Wal Mart, all sorts of stuff. It was a bit odd shopping at wally world where the price of this car is possibly several multiples of the house value of the average Wal Mart shopper, but somebody has to do it. The car does attract a lot of attention though. I’ve had many people photo the car and had one guy video it while I was driving it down to Burlington NC to visit my mom.

Happy passenger on the way to band practice. 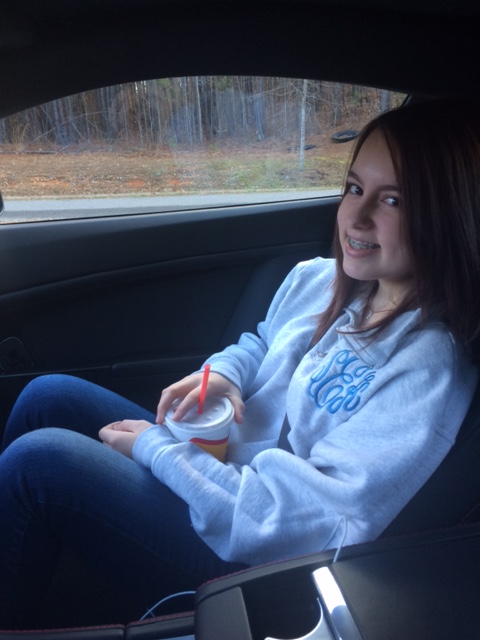 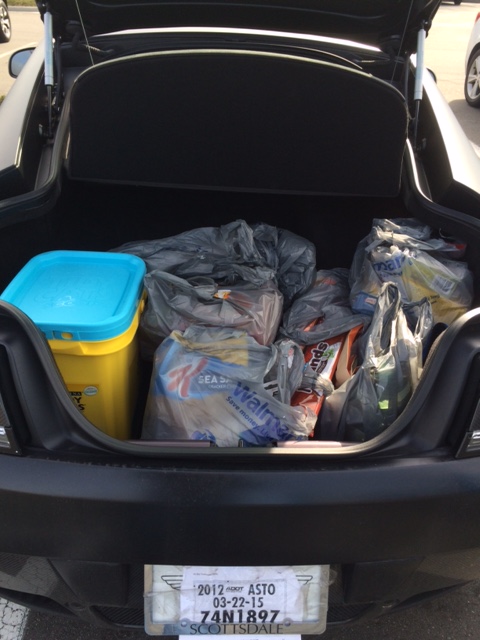 Incidentally some old people are not that impressed with it. My mom saw my FB post about the trade and thought I’d permanently traded the Mustang for the Aston. “Why you want that old dull car? It doesn’t even have any shine to it. I thought it was some antique car you’d gotten”. On the other had the folks at the local pharmacy told my dad he was “ridin’ in style” when I took him over to get his meds, so some old folks get it. My dad was not too impressed with the fuel door mechanism we had to pry open with a credit card, but it’s English.

Had to pull off on Interstate 40 Friday AM and procure some Rush tickets for the family and Jeff. 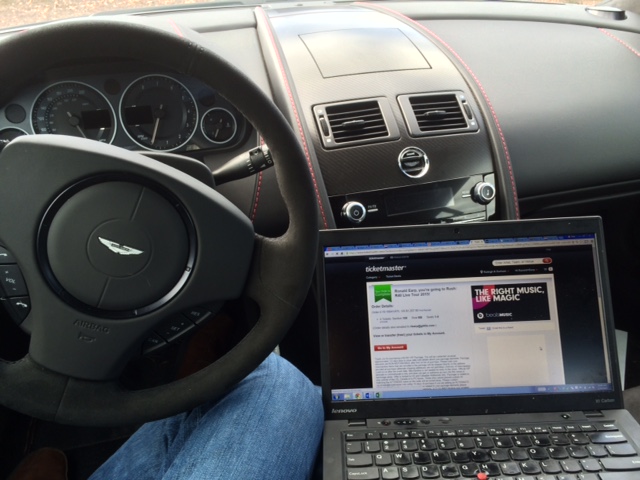 I’m sure this is probably the first, and last, Aston Martin that will ever show up at the Wake County Shooting Facility. Jeff, by the way, Jeff G lost his 9mm in the car somewhere so let him know if you find it. And be careful at airports, check points and stuff.

BAD ASS. That’s what this car is and I’ll be sad to see it go.

And back to the tank 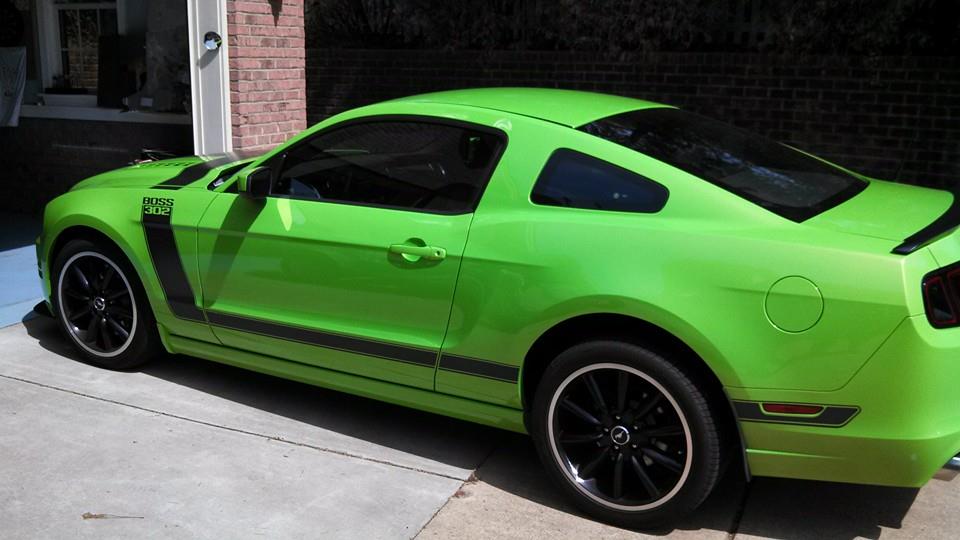 Supporter
I don't know how Aston prices the "matte" finish but on the Benz SLR it costs $10K to have your car not shine! Now with my painting skills, I can guarantee no shine for less than $500!

Staff member
Admin
Lifetime Supporter
I'm not much for the matte "murder" black paints - but - What a marvelous car!!!

Your review is consistent with others I've read...

JeffYoung said:
Trying to gather some information on this. Pistonheads doesn't have much which is surprising.

The V12 S has a plate diff as far as I know. I have a V8 Vantage and I suspect the grip issues are the same as mine, mine run Bridgestone Potenza's, fine in the warm and wet but not so hot in the cold, have also found the rear suspension to almost "patter" the tire on a rough surface which leads to the Traction cutting in, mostly only when going in a straight line. Once loaded up round a corner it's fine. Also if the car is stood for a while the tyres will develop flat spots, which soon go after a couple or three miles.
Not all Aston owners are loaded, I for one am certainly not!!
Last edited: Feb 21, 2015
J

GT40s Supporter
Randy, all, thanks -- I was hesitant on the color as well. There are only a few (150) of these cars in the country, and this one is even rarer than tht -- it is 3 of the "last 40" manual V12s Aston Martin will ever make. Of that it is one of 5 with the matte finish.

I prefer more vibrant colors but I really wanted a V12V and this one was a great deal (I think the paint turned a lot of folks off).

MrNoo, yes, I know the V12Vs has the Oerlikon-Graziano automated manual with a clutch pack. Mine is a true manual. I think it is Graziano as well with a Salisbury clutch back but I'm not sure....
M

Make sure you keep the oil levels up in the engine as the V12's can do the little ends if run low, you'll hear a faint tapping sound and then it all starts to get very expensive!!!
M