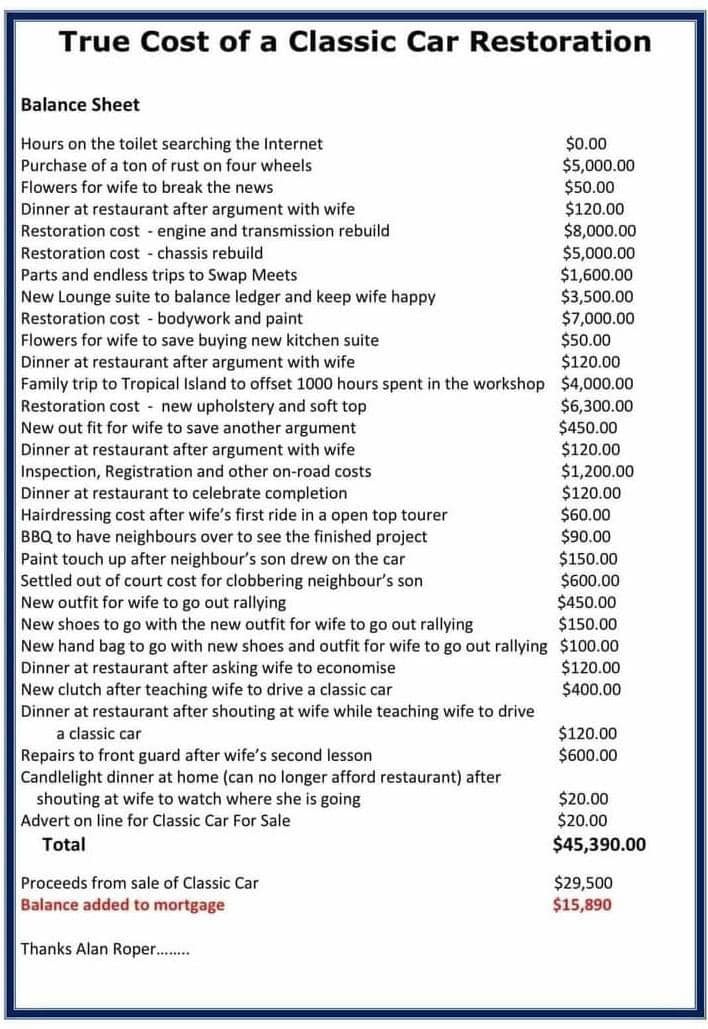 Lifetime Supporter
Old jokes making their rounds in Russia in the 1980s:

An American dog, a Polish dog and a Russian dog were discussing the differences between their countries.
The American dog explained that in his country, dog owners allowed their dogs to bark and play and carry on...and, when commanded to do so, if they barked just right, sometimes their owners gave them meat.
The Polish dog seemed puzzled and asked, "What is 'meat'?"
The Russian dog, who was also a bit puzzled, asked, 'What is 'bark'?"

Two Russian soldiers were discussing current events when one asked the other, "Does where we are right now economically represent 'pure communism'...the best there is...the epitome?"
The other immediately replied, "Oh, no. Things will get A LOT worse.

In the 1980s about one in seven Russians owned a car...they had to wait 10 years to get a new one...and they had to pay for it up front.
One day a man came in to buy a new car, put his money down, and the guy behind the counter doing the paperwork instructed the buyer to come back on that date 10 years hence and pick up his car.
The buyer asked, "In the morning or the afternoon?"
The guy behind the counter was stunned by the question and asked, "What difference would it make?! It's 10 years down the road!
The buyer sheepishly replied, "Well, a plumber is supposed to be at out house at 10 AM on that day."


Speeding was becoming an epidemic around Moscow, so the word was put out amongst the local constabulary that ANYONE they caught speeding was to get a ticket no matter WHO it happened to be. NO EXCEPTIONS. PERIOD.
Shortly thereafter, Gorbachev found himself at home running very late for an important meeting at the Kremlin. He sprinted to his waiting limo, ordered his chauffeur to take a seat in back 'cause HE was going to drive today.
As Gorbachev sped thru a rural section of his route, he sped right by two motorcycle cops...whereupon one of them chased the limo.
A few minutes later, the cop that had chased the limo returned and parked his 'cycle next to his partner.
"Did you catch him?"
"Ya."
"Did you give him a ticket?"
"Oh, no no no. No, I didn't."
"WHY?! You know there are to be NO exceptions for ANYBODY!"
"Well, I didn't DARE in this case."
"Who the devil WAS that guy? He must have been VERY important."
'I don't know. I couldn't see him clearly thru the window tint...but, Gorbachev was his chauffeur..."
N

Supporter
Carrot in a box
S 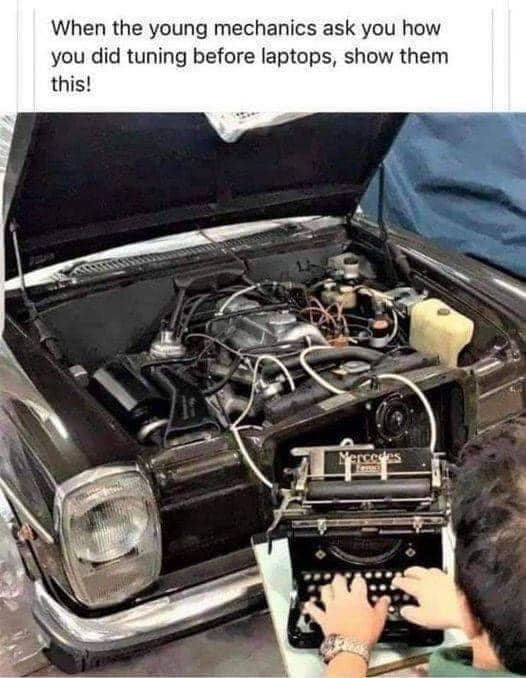 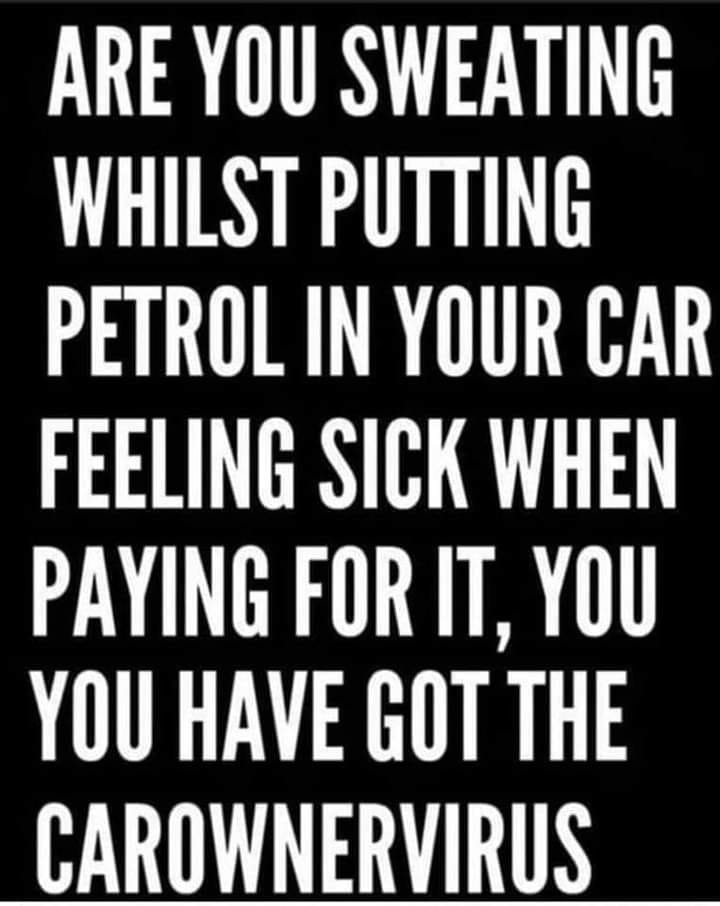 Supporter
Somewhat ironically considering my last post, I would just like to say :-
Thanks everyone for your concern.
First off, I’m ok, I was a bit shaken up though.
For those of you that aren’t aware, I was robbed at Tesco’s petrol station earlier this morning. After my hands stopped trembling, I managed to call the police.
They were quick to respond and calmed me down because my blood pressure went through the roof!
My money was gone however

The police asked if I knew who did it and I told them,
“Yes, it was pump number 2”
Currently sitting in a cell for wasting police time. 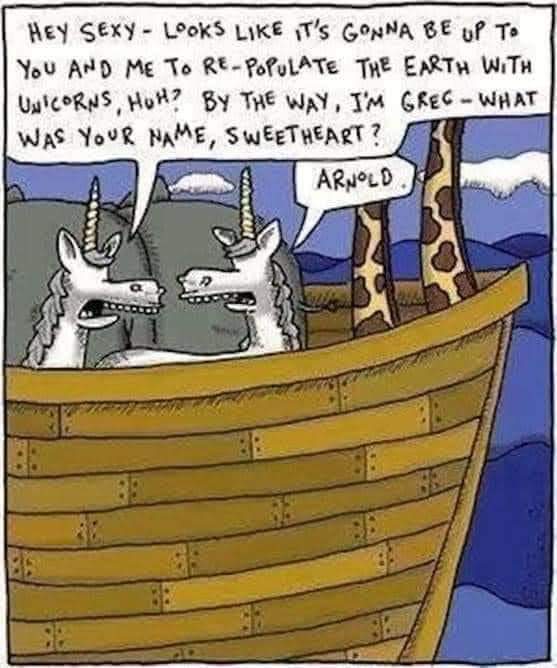 TODAY that would not pose a problem...according to some people.
B

Larry L. said:
TODAY that would not pose a problem...according to some people.
Click to expand...

Fortunately, insanity doesn't supercede the logic of the joke...

Supporter
Fact is there are two girls in the local high school that want to be recognized as cats. They communicate with different kinds of meows. PS i'm not making this up.
L

bill kearley said:
Fact is there are two girls in the local high school that want to be recognized as cats. They communicate with different kinds of meows. PS i'm not making this up.
Click to expand...

Nothing surprises me anymore.
'Vampires' were all the rage a few years ago. 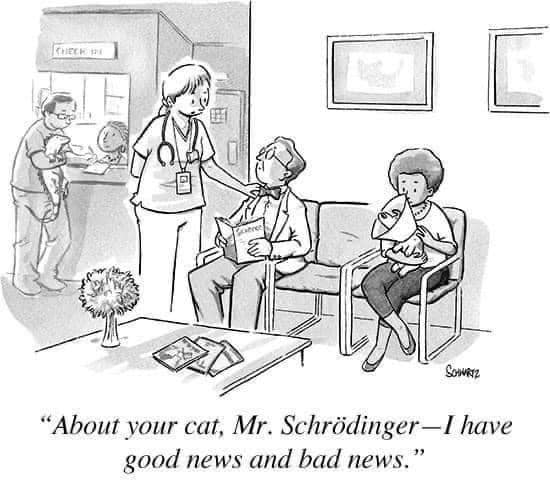 Thanks Mike, thanks to google I got it
L

Supporter
But either way it's in a box! 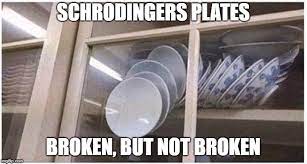 Funny, but I wouldn’t be paying the bill. Probability says the vet hasn’t yet looked at the cat.

Try and top this one Chuck!