Lifetime Supporter
Looks good, but where will you run the spark plug wires and how will you remove the plugs when you need to do a service on them?

where will you run the spark plug wires and how will you remove the plugs when you need to do a service on them?
Click to expand...

Ian, there is more room between the header and the block than is apparent in the previous pictures. The picture below is a top view. While the stock spark plug wires won't work, I should be OK with high-temp, low profile right-angle boots. I need to purchase some to check fitment on the actual block (it would be nice if the plastic block had threaded inserts for \spark plugs).

Lifetime Supporter
Thanks Scott, I must say I have heard of a few sets which looked great, but the plugs were not accessible and got changed out in short order.

Lifetime Supporter
I completed the upgrade to the 33-spline ZR1 hubs and 33-spline Driveshaft Shop stub axles. I’m not sure how other builders machined the recesses for the socket head cap screws, but the approach that I took was quick and straightforward. I purchased the following counterbore and removeable pilot from McMaster (the pilot slides into the counterbore and is held in place with a set screw): 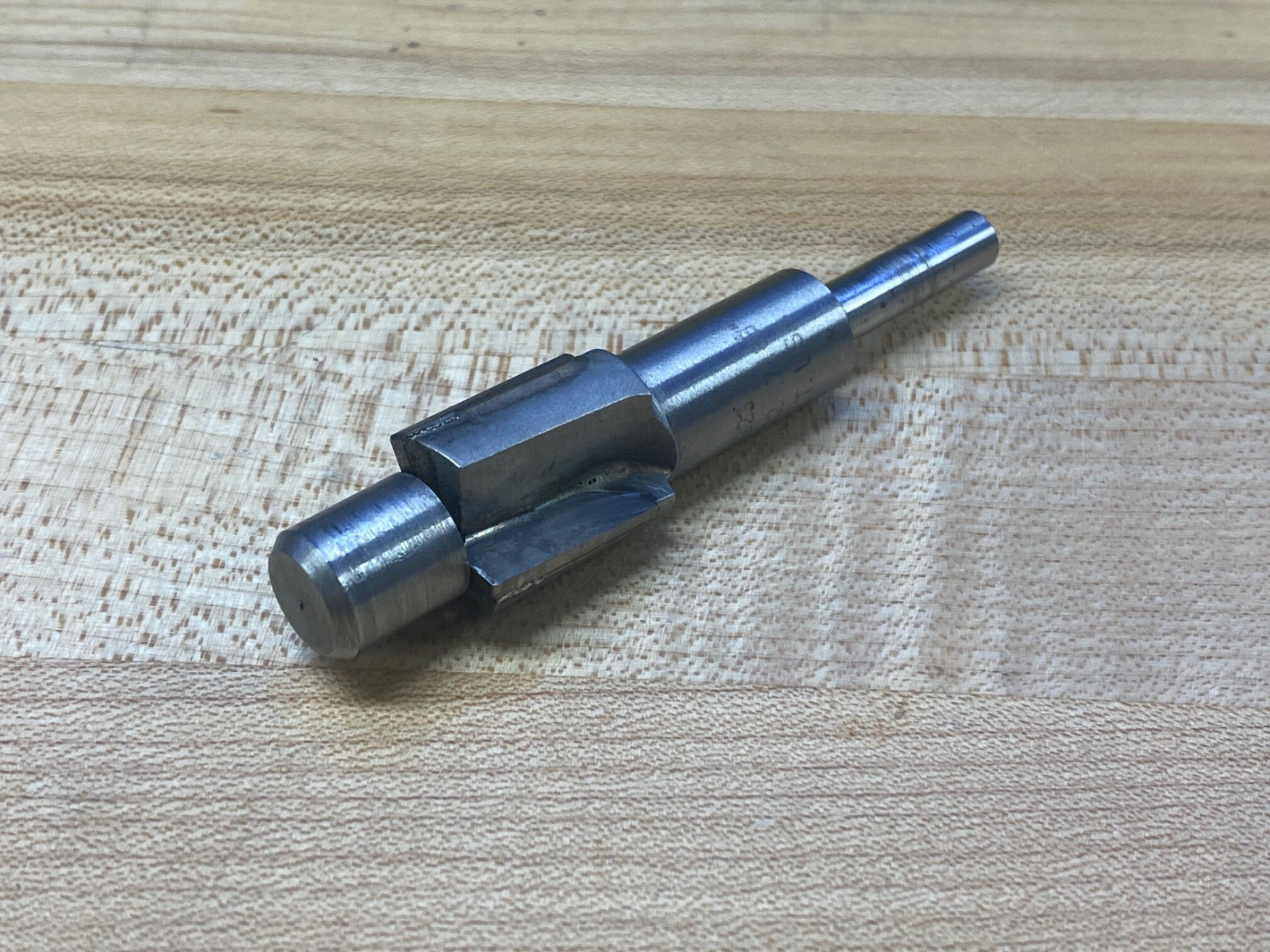 I wanted the pilot to have a close fit to ensure that the counterbore was concentric and a 15/32” pilot had too much play so I purchased a 1/2” one and used a lathe to obtain a perfect fit. This made indexing the counterbore easy… if the pilot drops in the hole, you're good to go. I used a mill, but I think a drill press with low runout would have worked fine. The picture below shows that the fit is excellent — wall clearance is about ten thousandths. The counterbore does cut into the 1/4” hole which is used for dowels that hold the triangular spacer on the other side of the upright. Since the dowel isn’t long enough to reach the machined section this isn’t an issue. 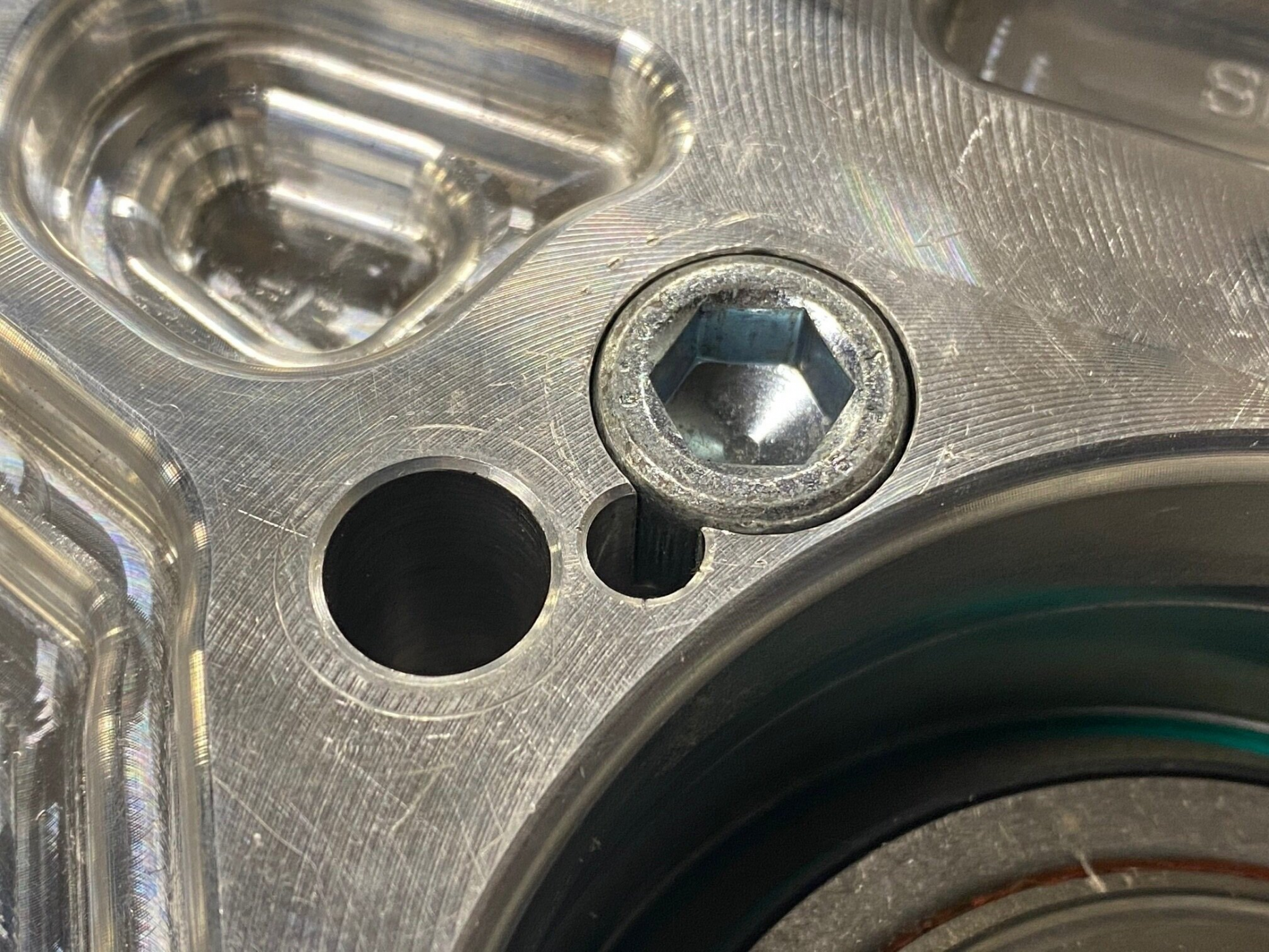 Standard washers won’t fit in the counterbored hole so I used special washers to keep the screws from galling the upright. The screws are M12 x 1.75 mm by 55 mm long. I hate iron oxide because it rusts and I couldn’t find zinc-plated ones in the correct length, so I cut longer ones down and polished and painted the tip — I think my OCD can live with that LOL. 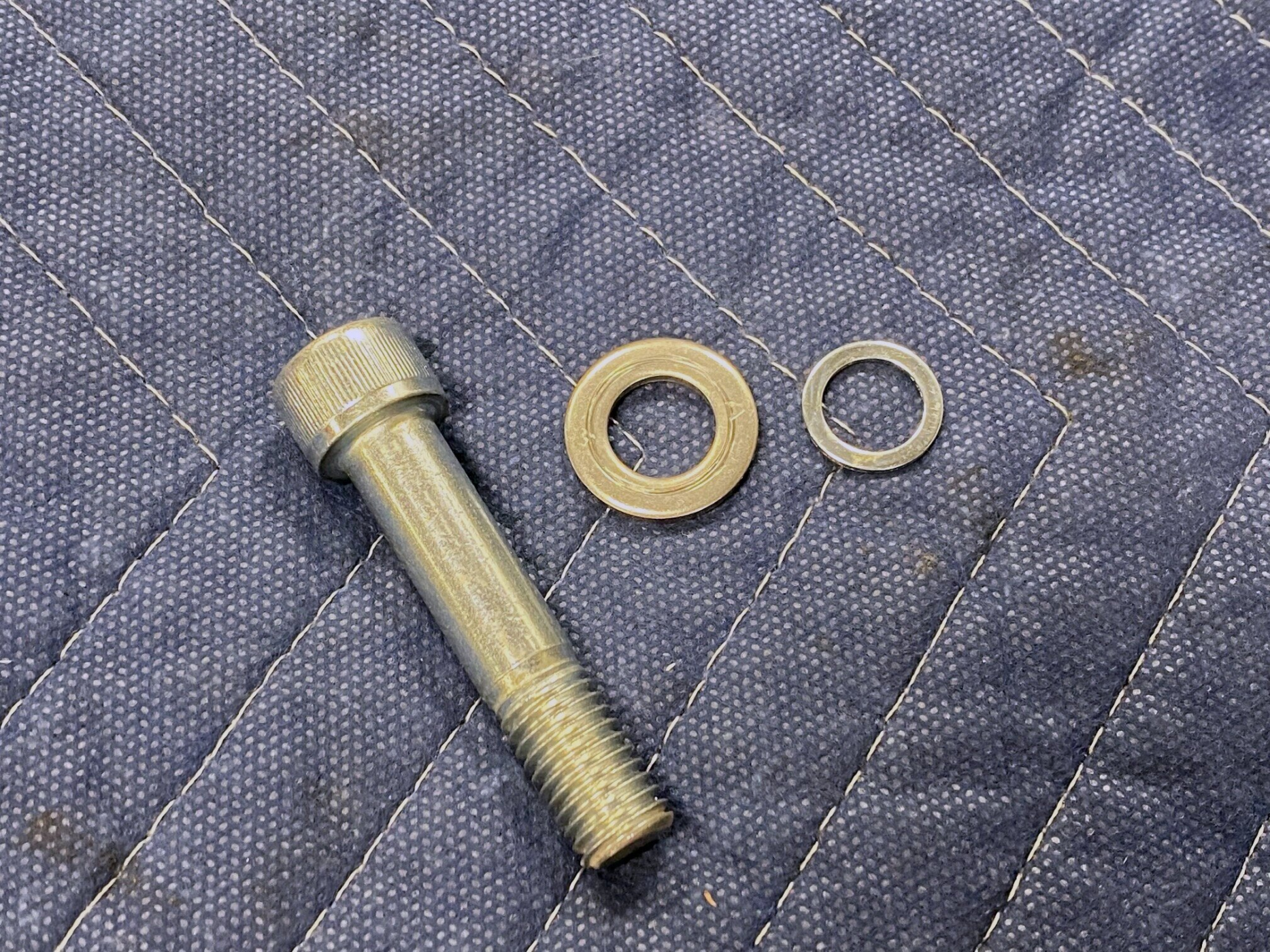 Most builders chamfered the ID of the upright, but Agile Automotive suggested that I machine the stub axle rather than the upright. I assumed that it would be a nightmare to machine because they were hardened, but Agile pointed out that if they were too hard they’d become brittle. Agile was correct and I didn’t have any issues machining them. This is a quicker and simpler process than machining the upright which would require it to be carefully indexed on a rotary table and cut with a decent sized chamfer end mill. To machine the stub axle you just chuck it up in a lathe and go. I took ~0.040” off of the stub axles which provides about 0.015” clearance between the stub axle and the upright.

All of the stub axles pictured below were sourced from The Driveshaft Shop. From left to right; stock 30 spline, unmodified 33 spline and modified 33-spline. The stock piece is a standard part for a Nissan. The larger cone allows it to clear the upright’s ID, but the taller spline extends past the hub and you must use a doughnut-shaped spacer between the spine and axle nut so that the axle nut binds on the hub and NOT the spline. The stock unit is fabricated by press fitting the spline into the cone and welding a nut on the backside. The 33-spline units are machined from a single piece of billet, do not require a spacer and are rated to 1,800 HP. 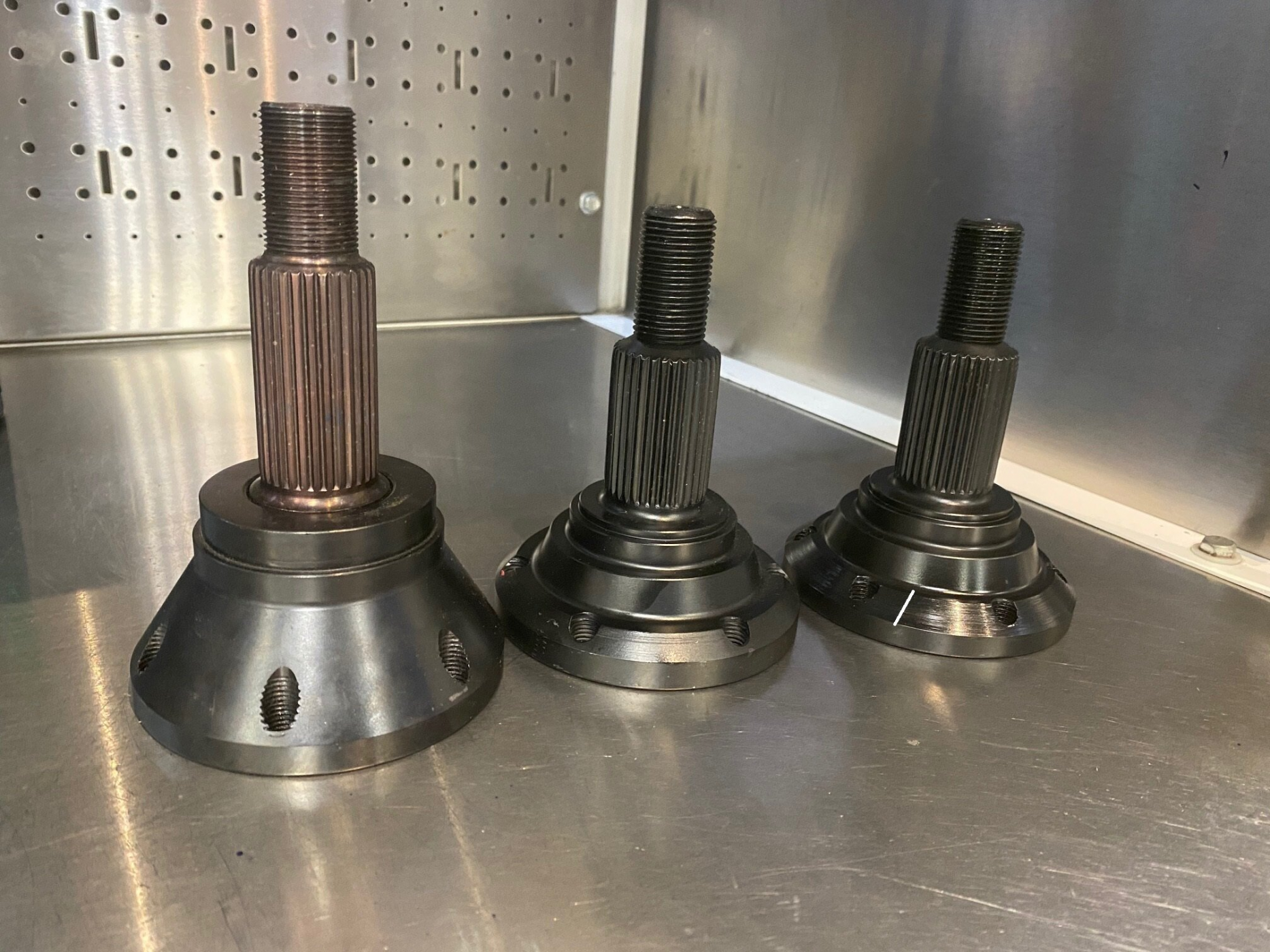 I forgot to take a picture before I painted the machined surface so I added a white line to illustrate the surface that was machined. Because the mounting flange is shorter I will need longer axles which will reduce the angle of the CV joints (i.e., place less stress on them).

To accommodate the sensor wire, I drilled the ID of the hub into an unused bolt hole and carefully deburred both sides of the hole. I then de-pinned the connector… well, after spending 15 minutes attempting to de-pin it I spent about 20 minutes trying to carefully cut it apart to maximize the length of wire and pinched my finger. The second connector took a second to snip off LOL. I will encase the wires with something to protect them from the edge of the hole and re-terminate them with Deutsche connectors. In addition to being superior to the OEM connectors, they are easy to de-pin. 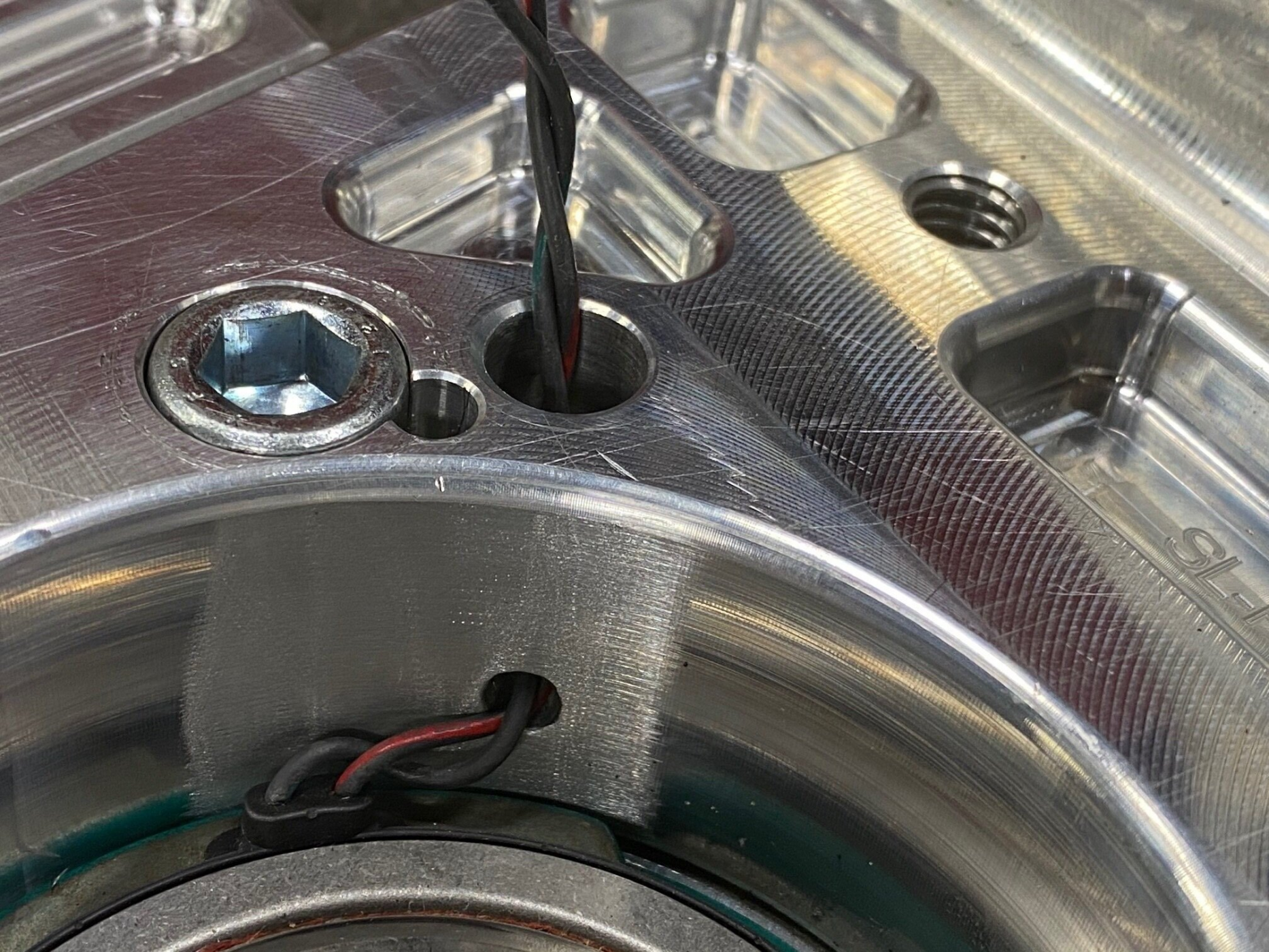 Supporter
Deutsch DT(M) connectors are the best invention since sliced bread.. I cut off most of any connector I find on my project cars these days.
as long as you have a high quality crimper to connect the pins, and the right pins for your wire gauge, they are motorsport quality robust.

Lifetime Supporter
LOL Jasper, I also cut every connector off and replace with a Deutsch. I have an assortment of their DT and DTM series, but their motorsport stuff is spendy and I only use those in critical places (e.g., harness/sub harness connections, steering wheel controls, etc.) 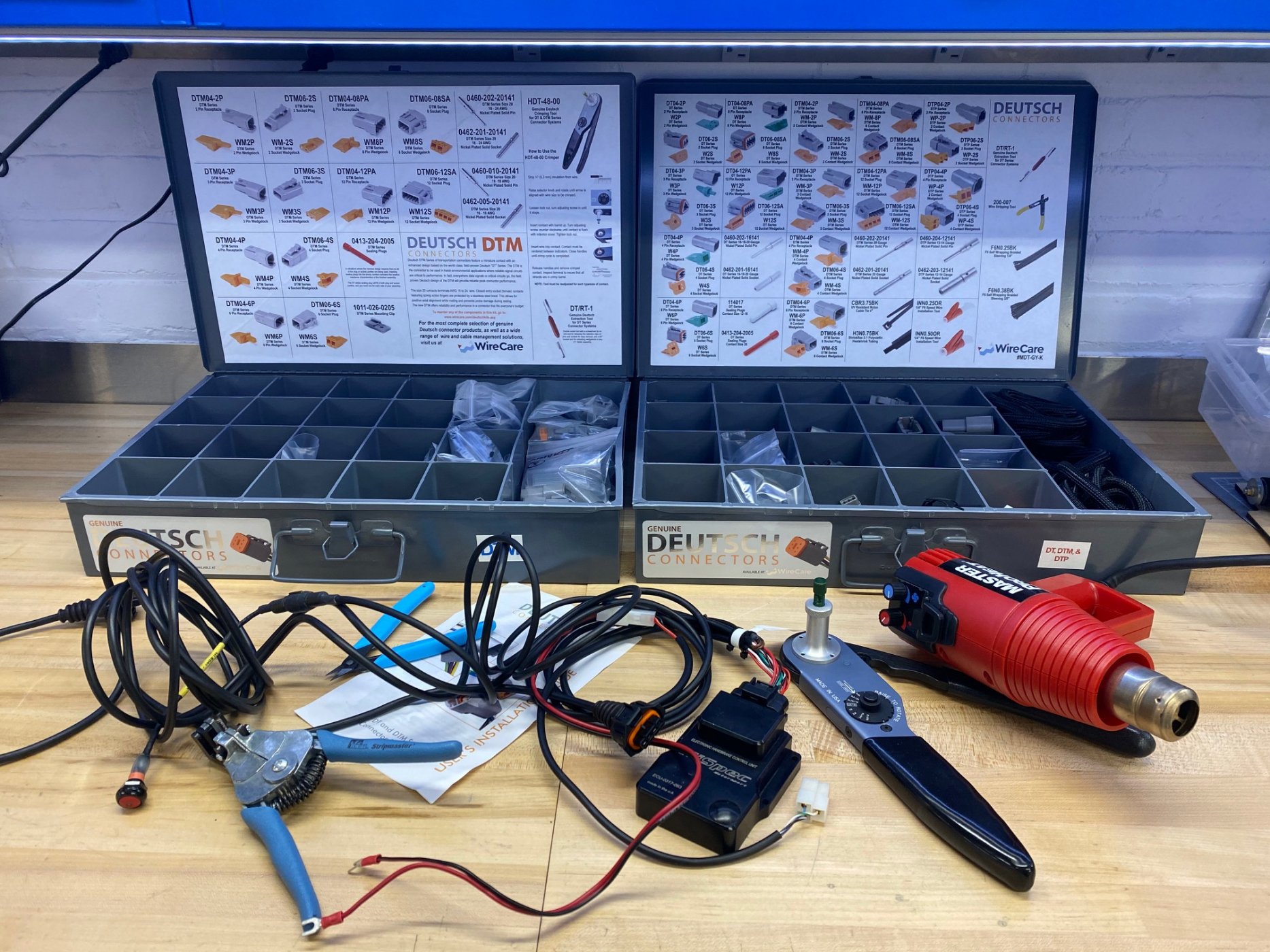 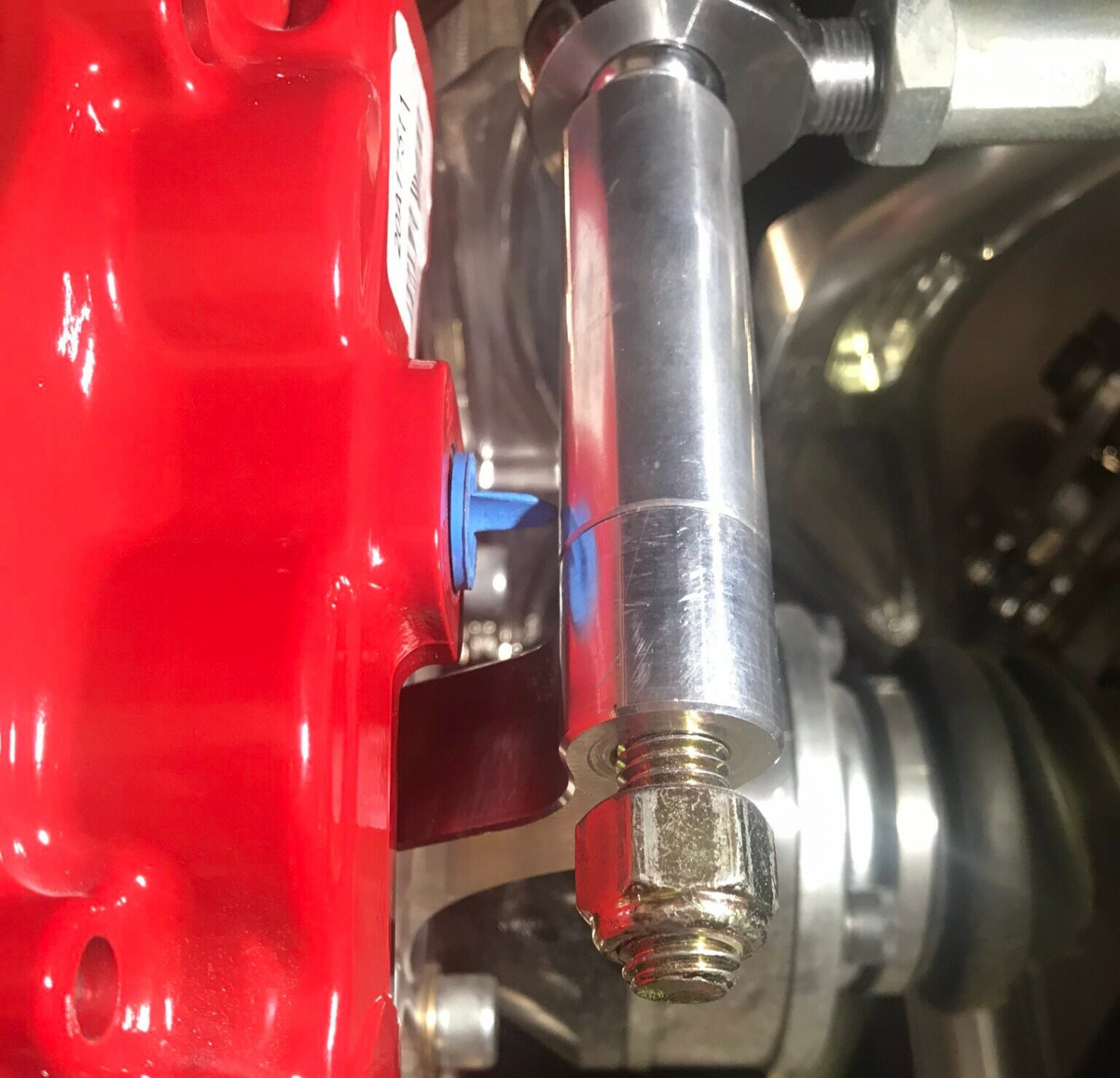 I have the Brembo GT brake upgrade and the supplied banjo fitting collides with the toe link arm and the lower bump steer bushing. It’s not even close. In the picture above the blue plug is where the banjo goes, but the supplied Brembo banjo fittings, let alone the banjo bolts and crush washers, won’t fit. The pile of nice discarded parts grows again.

To address this, I had to modify two parts. I machined a flat on the toe link arms with a mill. While the cutting process was straight forward, it was a pain-in-the-ass to fixture due to its awkward shape. I considered milling a flat on the lower bump steer spacers, but I assumed that they would rotate such that the flat was no longer aligned with the flat on the toe link arm. For this reason, I turned turned them on a lathe.

Even then things didn’t fit so I needed to find some new parts. Nobody specs the height of their banjo fittings, banjo bolts or crush washers so I had to call a bunch of places and get someone in tech support to either measure one or look it up in CAD. I wound up with parts from several suppliers, but as can be seen below, everything fits. 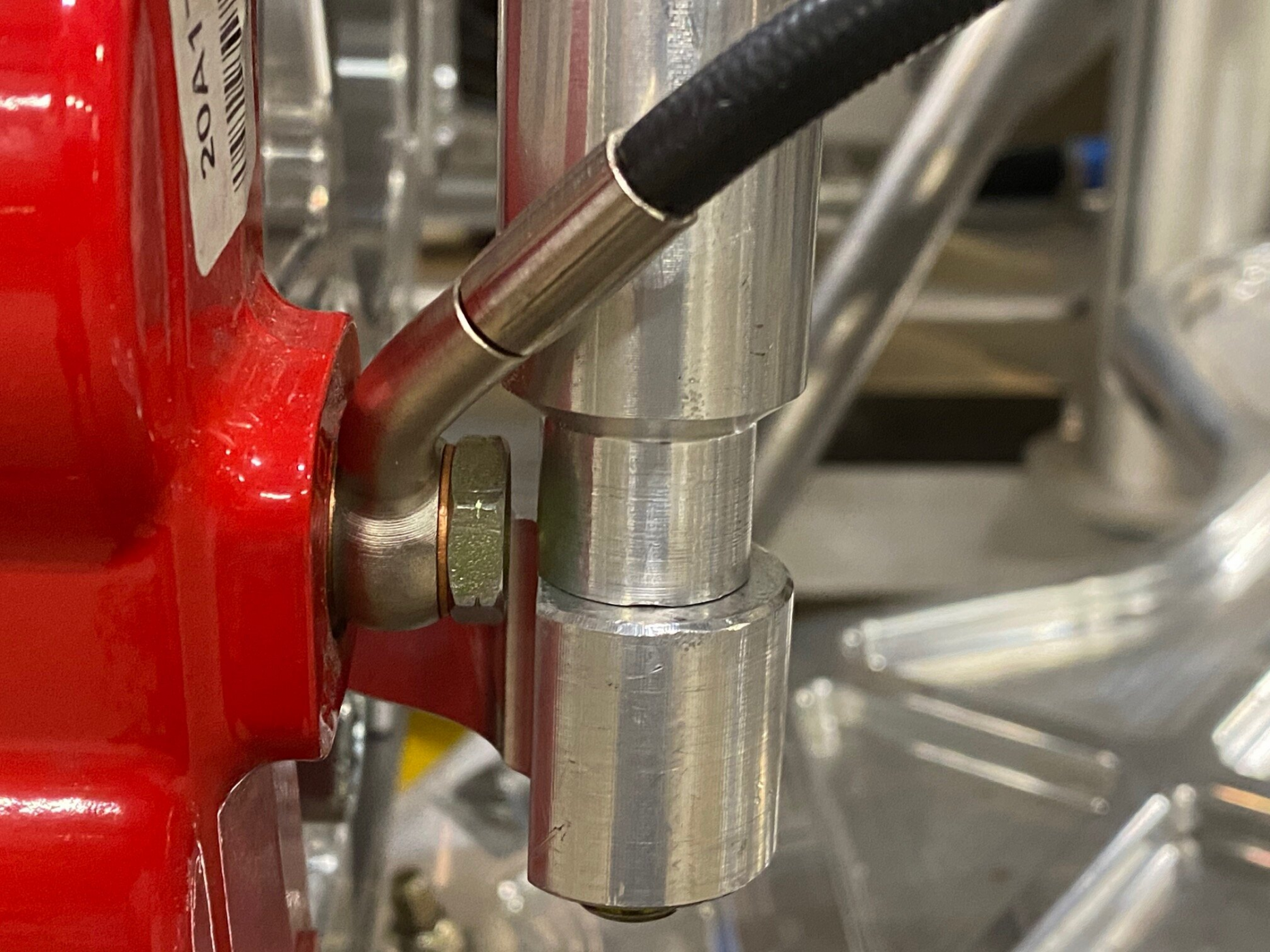 Abe used his hydraulic crimper to fabricate custom flex lines. They’re PFTE with braided stainless steel and a rubber covering. I 3D printed a bracket to keep the brake line in place. The brake line hole is oversized and has a large chamfer (shown in blue) on both sides to allow the brake line to slide back and forth as the suspension moves. I don’t think that heat will be too bad there, so the Onyx should hold up. If not, I’ll change materials. 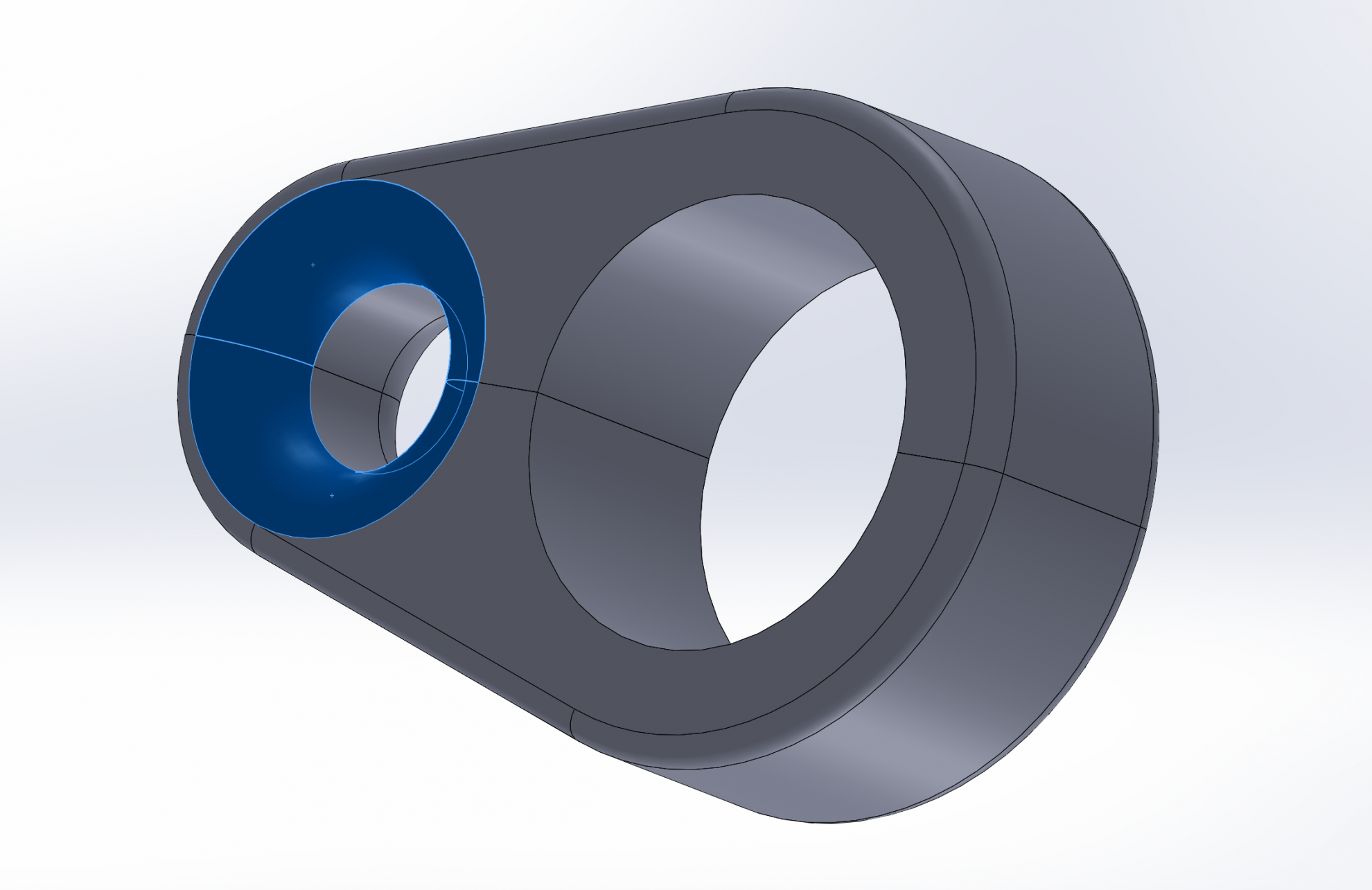 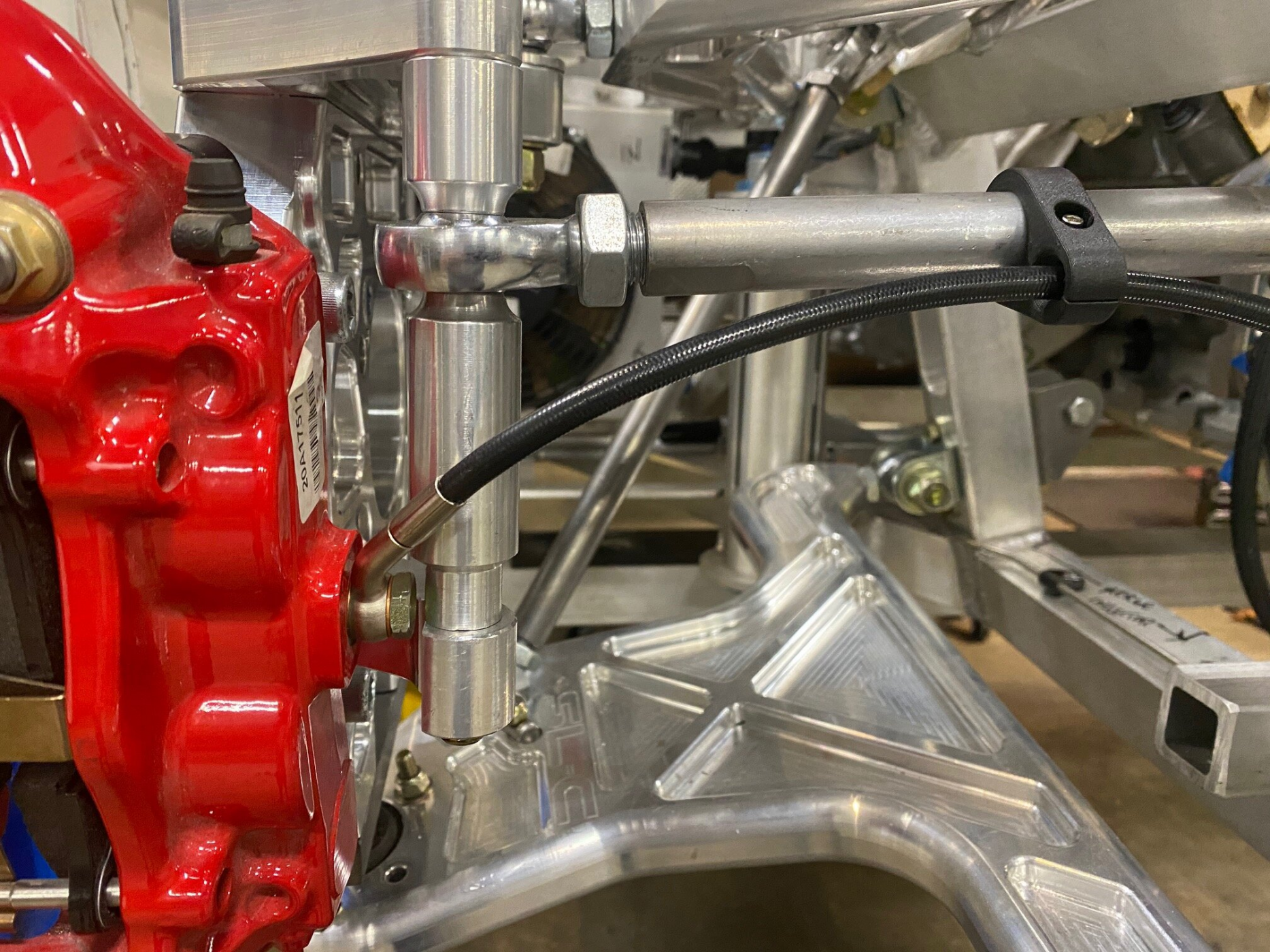 The adjustable electric power assist (EPAS) column from DC Electronics (DCE) doesn’t contain any stalks and I was planning on welding an adapter to keep everything as compact as possible. However, the column contains a pressure sensor which would be damaged by the heat. According to DCE I would essentially need to destroy the column to remove the sensor. There goes plan A.

Plan B was to adapt a steering boss to fit the spline. This was when I learned that the column is sourced from a Renault. Unfortunately the spline is some proprietary French invention (D’oh!) and DCE indicated that the only aftermarket steering boss was available from MOMO. So I was in a bit of steering wheel boss hell…

The MOMO steering boss has a steel spline and a steel collapsible section cast into an aluminum hub. The collapsible section takes up a lot of space and isn’t required because I have a custom lower shaft that provides over four inches of zero-resistance collapsibility BEFORE the steering wheel hits me. So I cut the steel section off with a bandsaw and faced the surface on a lathe. I was concerned about machining the steel embedded in the cast aluminum, but that went better than I expected. It was at this point that I realized that I’d need to remove the outer aluminum shell to accommodate the six mounting screws for the adapter. Once that was done I realized that I’d also need to machine the inner hub as well. All in all a lot of time on the lathe. As can be seen in the picture below there were some air pockets which don’t provide a warm-fuzzy feeling. 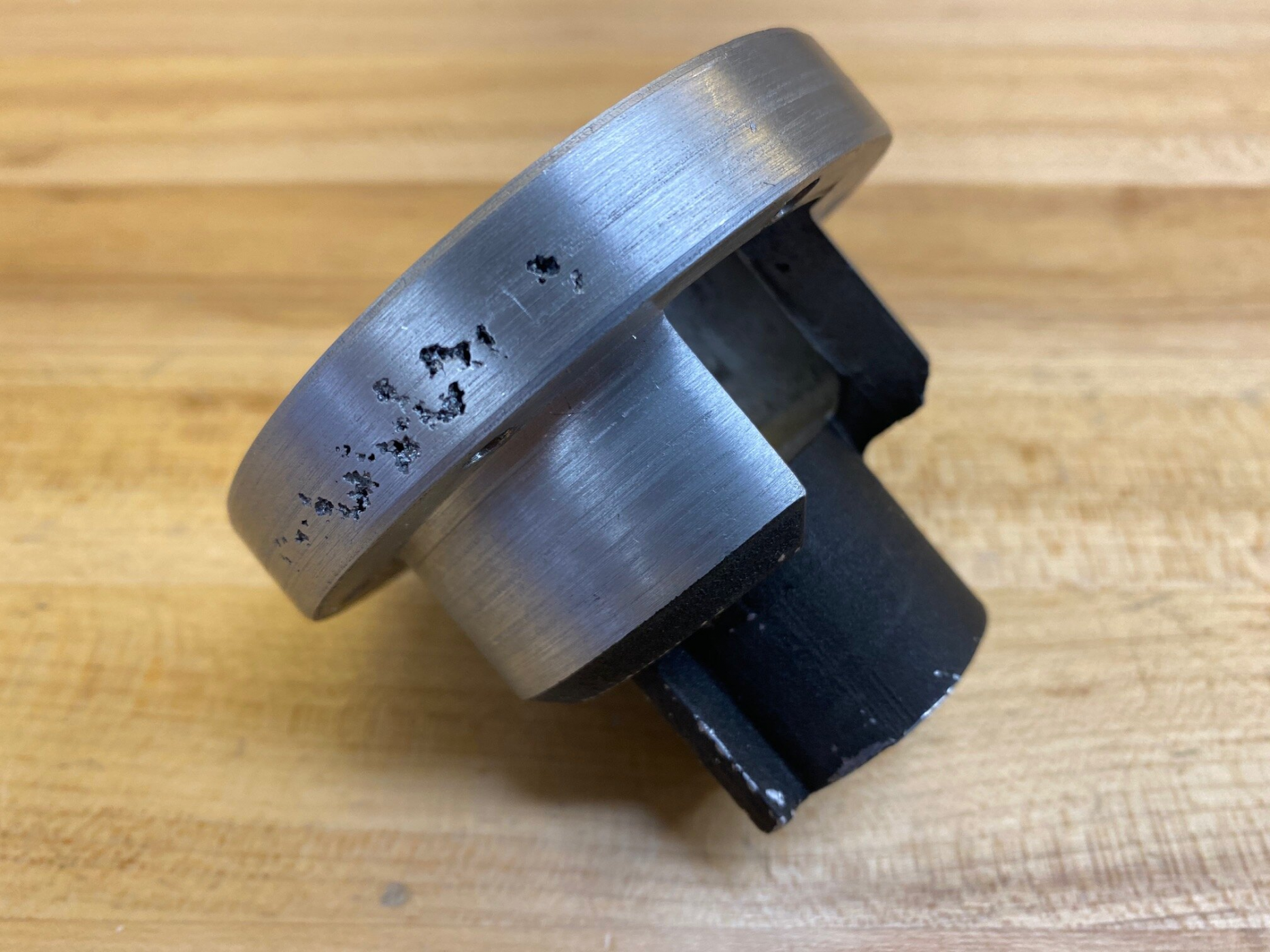 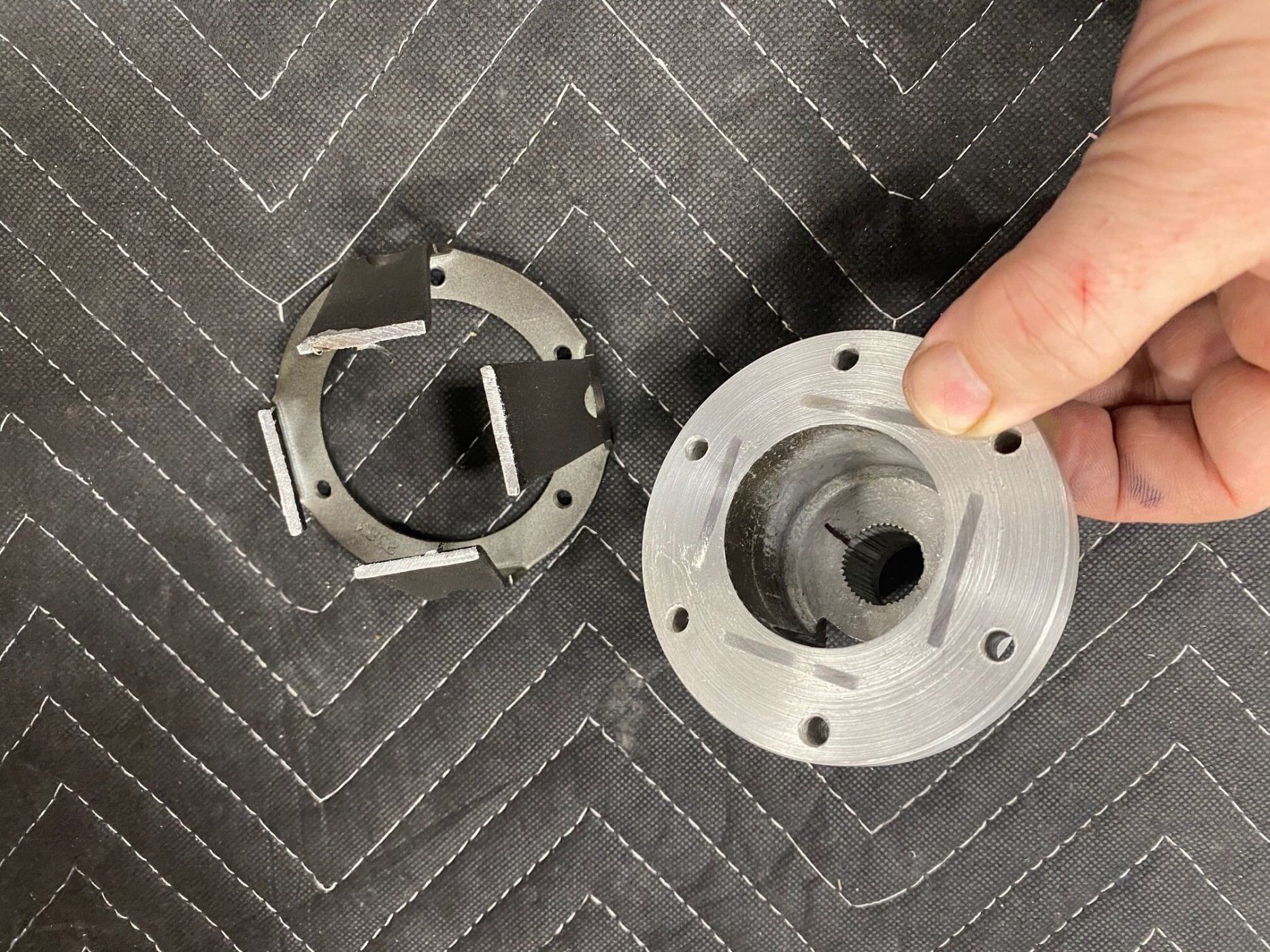 Joel, who also has a DCE EPAS, mentioned that OMP makes a compatible steering boss so I ordered one from eBay in the UK. Unlike the MOMO unit, the steel collapsible unit is attached with four screws. I was then able to quickly machine the front and rear faces. I didn’t like the lip on OD, so I cut it off in a lathe. Once machined, the OMP is about 0.8” shorter than the MOMO. 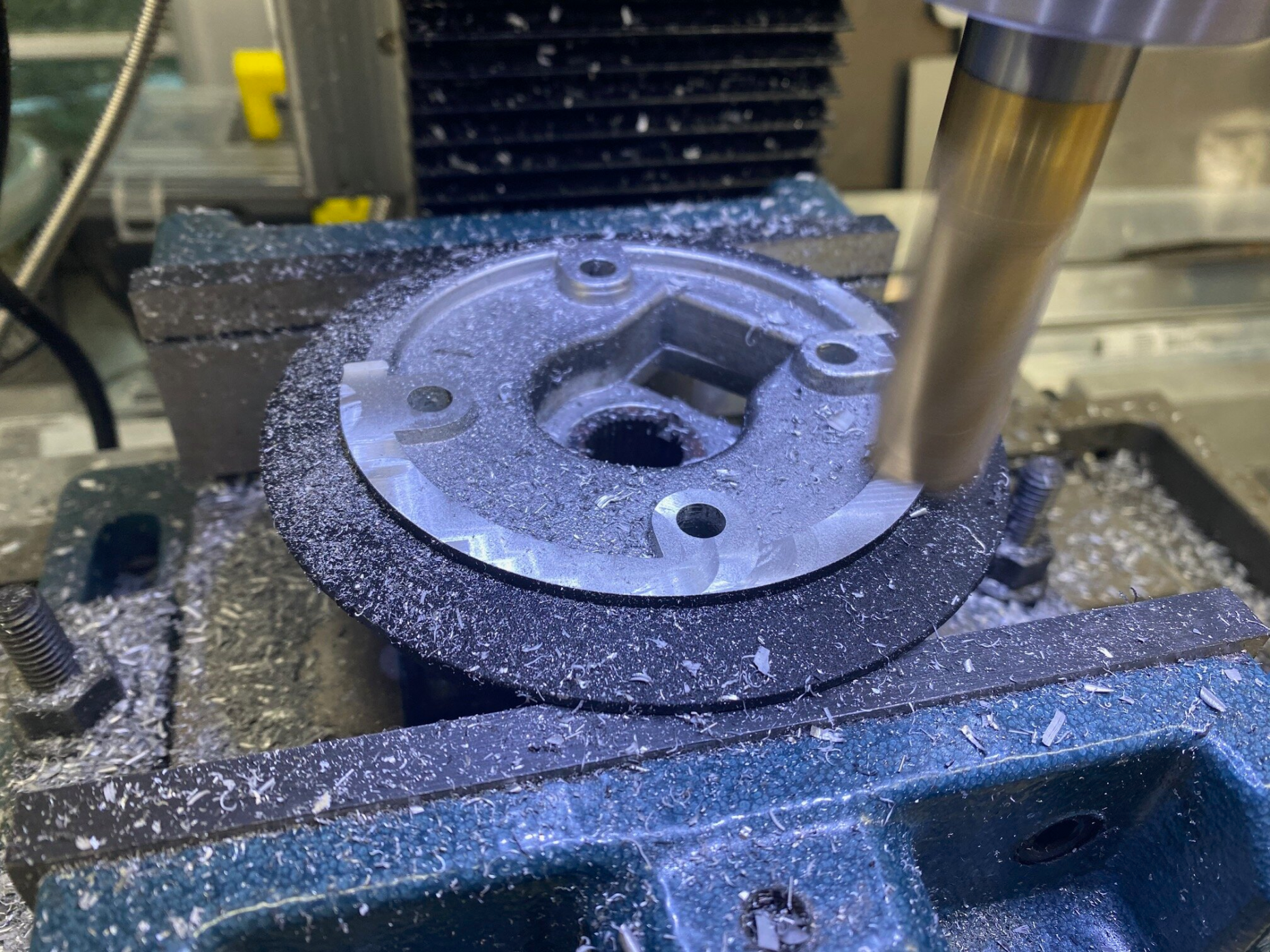 Front side of OMP being machined 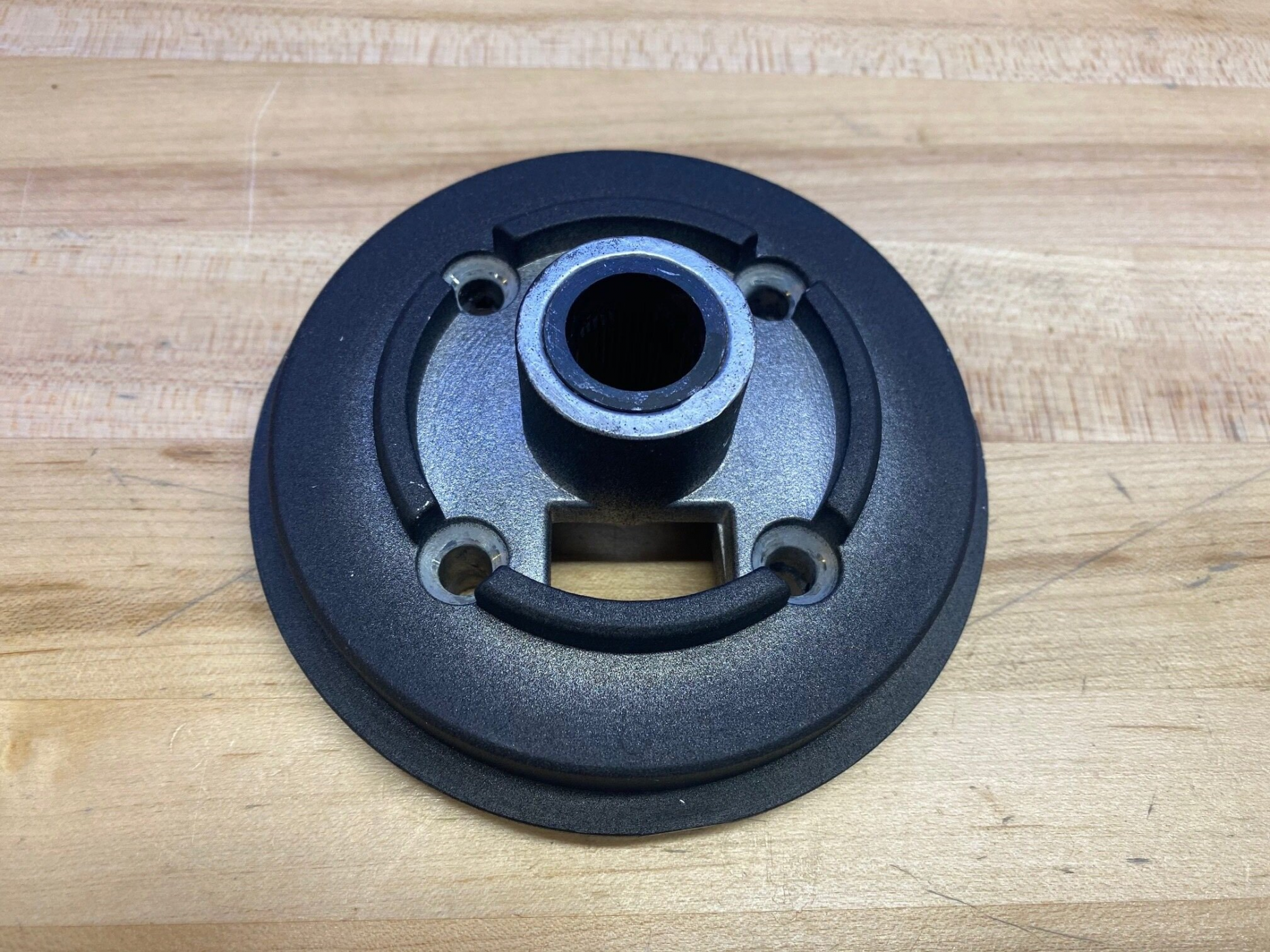 Backside of OMP. I probably didn’t need to machine this side, but I wasn’t sure how I was going to mount the quick release and it was easy to do. The lip which I also machined off is the outer ring sitting on the wood table.

MOMO on left and OMP on the right. Removing the outer shell on the MOMO reduced its OD. The MOMO has been drilled with the six holes to mount the quick disconnect whereas the OMP hasn’t been drilled yet (the four holes were used to mount the collapsible section).

MOMO on left and OMP on the right