Lifetime Supporter
The screws holding the rear ball joints in place are too long, something that’s bothered me since the car was delivered. I thought I’d replace them with shorter ones. That shouldn’t take long, right?

I needed to use a hammer to tap one of the screws out which created some aluminum shavings. The same screw on the other side had the same problem. I carefully looked at the screws and they both had a slight bend to them. WTF? Grade 8 screws don’t bend easily. 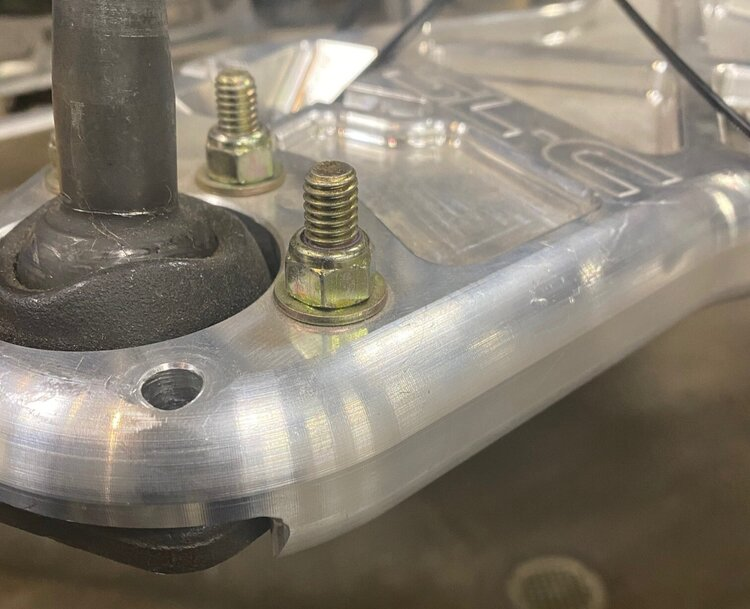 The underlying issue is that the large fillet machined into the control arm doesn’t properly support the washer. When the factory tightened the nuts with an impact gun the washer slid towards the fillet, tilted and pulled the screw sideways. While this isn’t a big deal it deforms the screw, deforms the hole and exerts a shear force on the other screws.

In the picture above the hole doesn’t appear deformed, but in the picture below the screw’s threads have clearly been embossed into the side of the hole. The reason for this is that the screw was pulled towards the fillet as the nut was tightened. 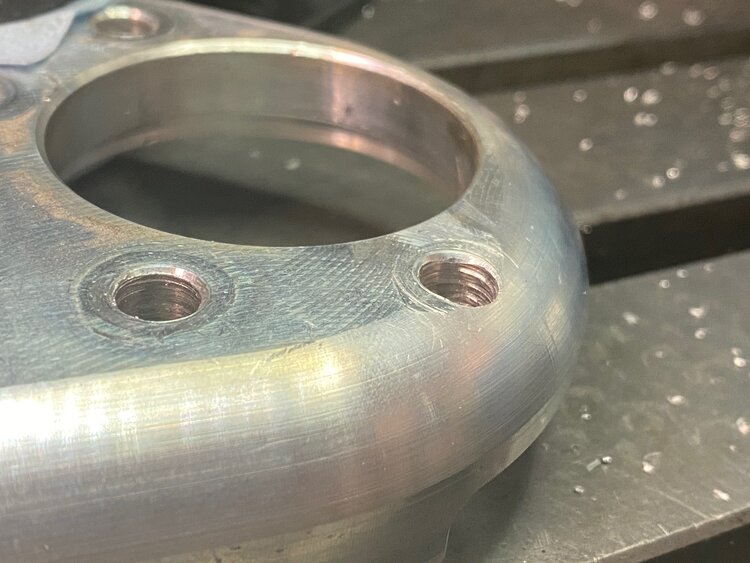 I addressed this by using a 11/16” end mill to machine a 0.130” deep flat recess. While the other screws have 5/16” washers, I used an M8 washer for the recess because it has a slightly smaller OD. Because I had to remove/reinstall the control arms, fixture everything, locate the holes, etc. this took me hours to do and it’s something that Superlite could have machined in seconds. I can now sleep better tonight LOL 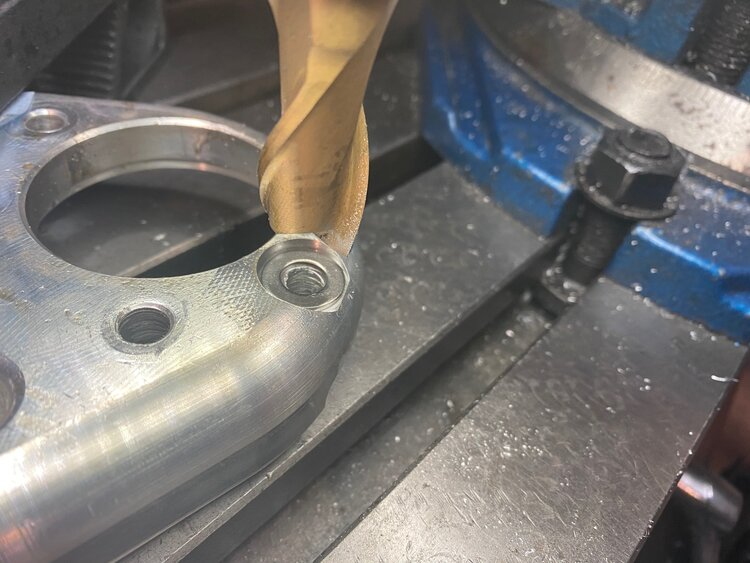 Scott, I had the same problem. Started with a shorter bolt but even then the suspension didn’t reach full droop, it was binding on the inner bolts.
What I did was to install the screw from the top instead.
I guess with your recess you will not have that problem, but I suggest that you check that the upright doesn’t hit the bolt/nut at full droop.

The length "issue" was purely cosmetic. So long at the screws on the front ball joint point down and the ones in the rear ball point up I don't have any binding issues. The machined recess is functional and as a side effect allows a 1/4" shorter bolt to be used.

Lifetime Supporter
Earlier this year I took the suspension off to have a bunch of the steel parts plated (details here) and yesterday I finally got around to putting the upgraded rear uprights, stub axles and hubs (details here) on the car. Everything went smoothly except that after torqueing the stub axle nut I gave the wheel a tug and it moved. I was able to move the wheel about 1/4” towards and away from the car with no effort. That’s not right! I tried the other side and it significantly less, but unacceptable, play.

The picture below shows the side with less play. You can clearly see the spline projecting past the hub so the nut is going to bind on the spline’s shoulder and not the hub. 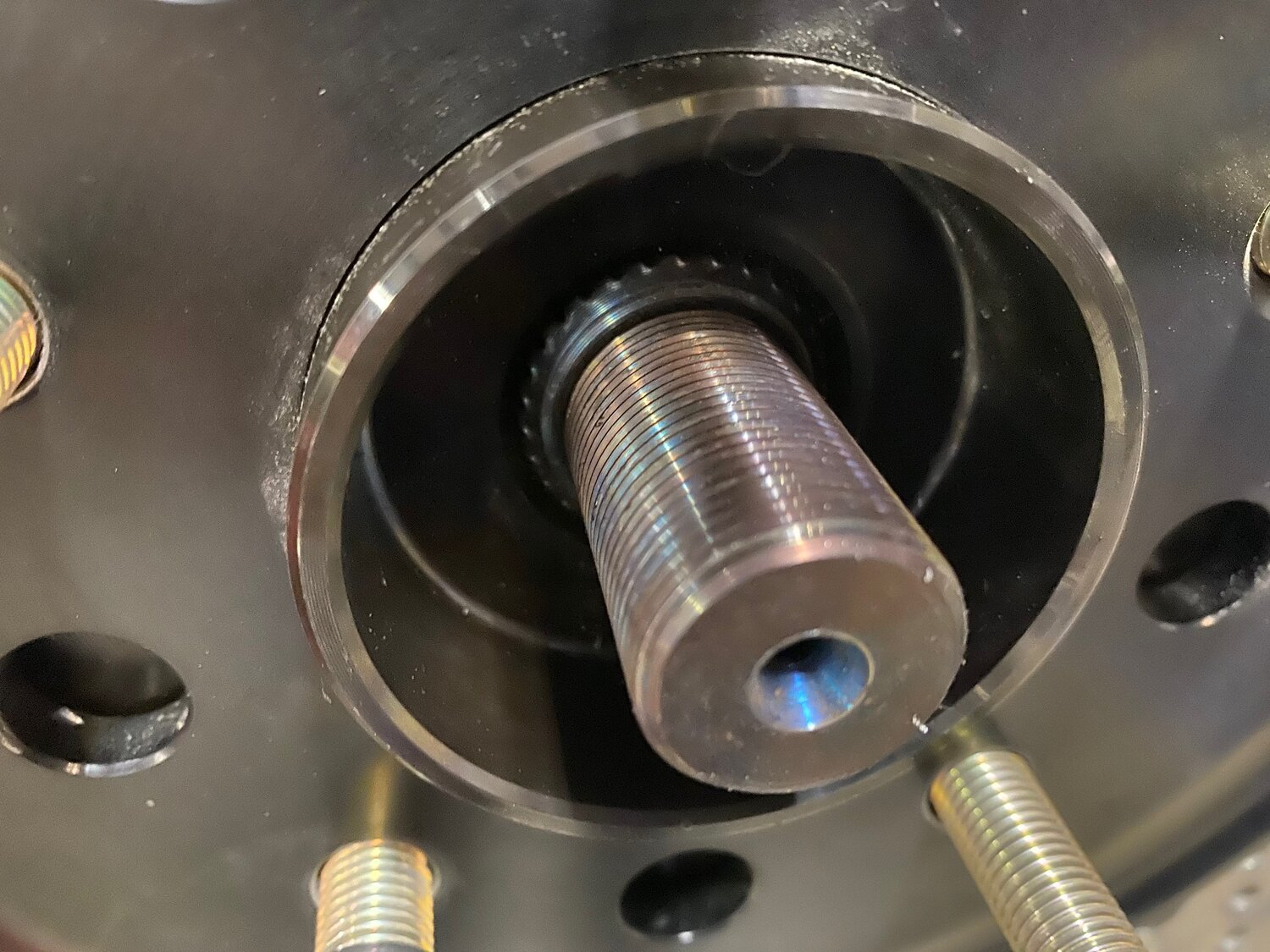 So why does one side have so much more play than the other? If you look at the picture below you will note that the threads on the left stub axle aren’t cut as far as the one on the right so the nut bound where the threads stopped on that side resulting in additional play. 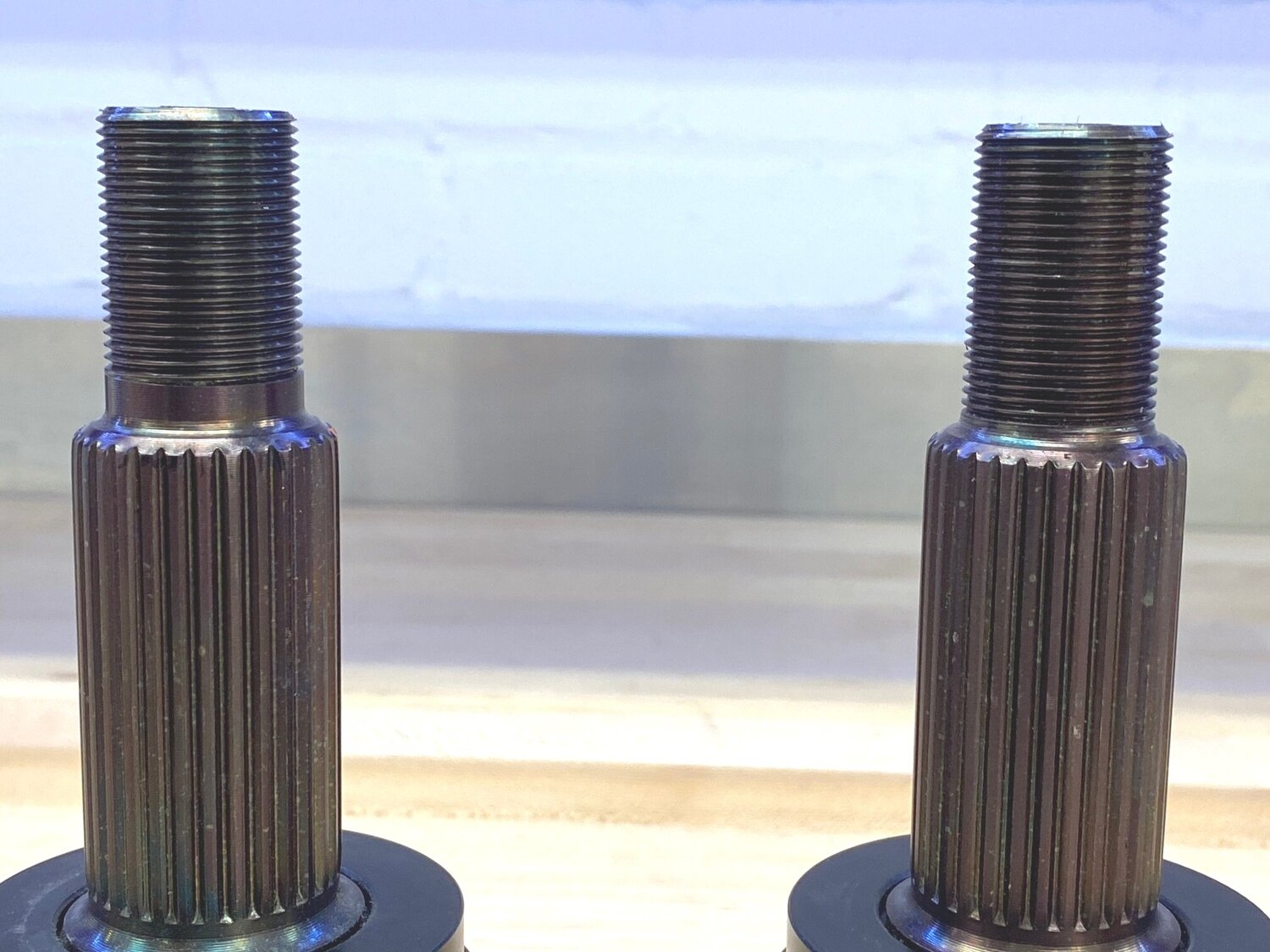 The right has more threads than the left

Bob is the only other person that I’m aware of who has upgraded his rear uprights. While his car isn’t registered yet, he’s had it on a dyno and he’s done a couple of hole shots. He torqued his stub axle nuts, but when he gave his wheels a tug last night he had the exact same problem.

Superlite has been shipping the upgraded parts on new kits for quite a while, but I haven’t heard about anyone having this issue before. Bob and I have the same SKF Corvette Racing Hubs, but they’re OEM replacements so that shouldn’t be an issue. Do you guys with the newer uprights have this problem? Did Superlite provide a spacer? Do you have the same stub axle?

Location of the part number

Supporter
Not the newer upgraded uprights/hubs but here is a comparison to what worked for me. I converted my rear SLC uprights to hold the C7 bearing/hub. I have them installed with no play like yours. I also have a second set sitting on a shelf for a future build. Here are two pictures showing the stubshaft from the back "bottomed out" and how far the splines on the stubshaft stop in the bore. Your stubshafts are definitely different then mine. Mine are from The Driveshaft Shop.
The third picture shows the length of the splined section from where the stubshaft bottoms out on the inside of the bearing. 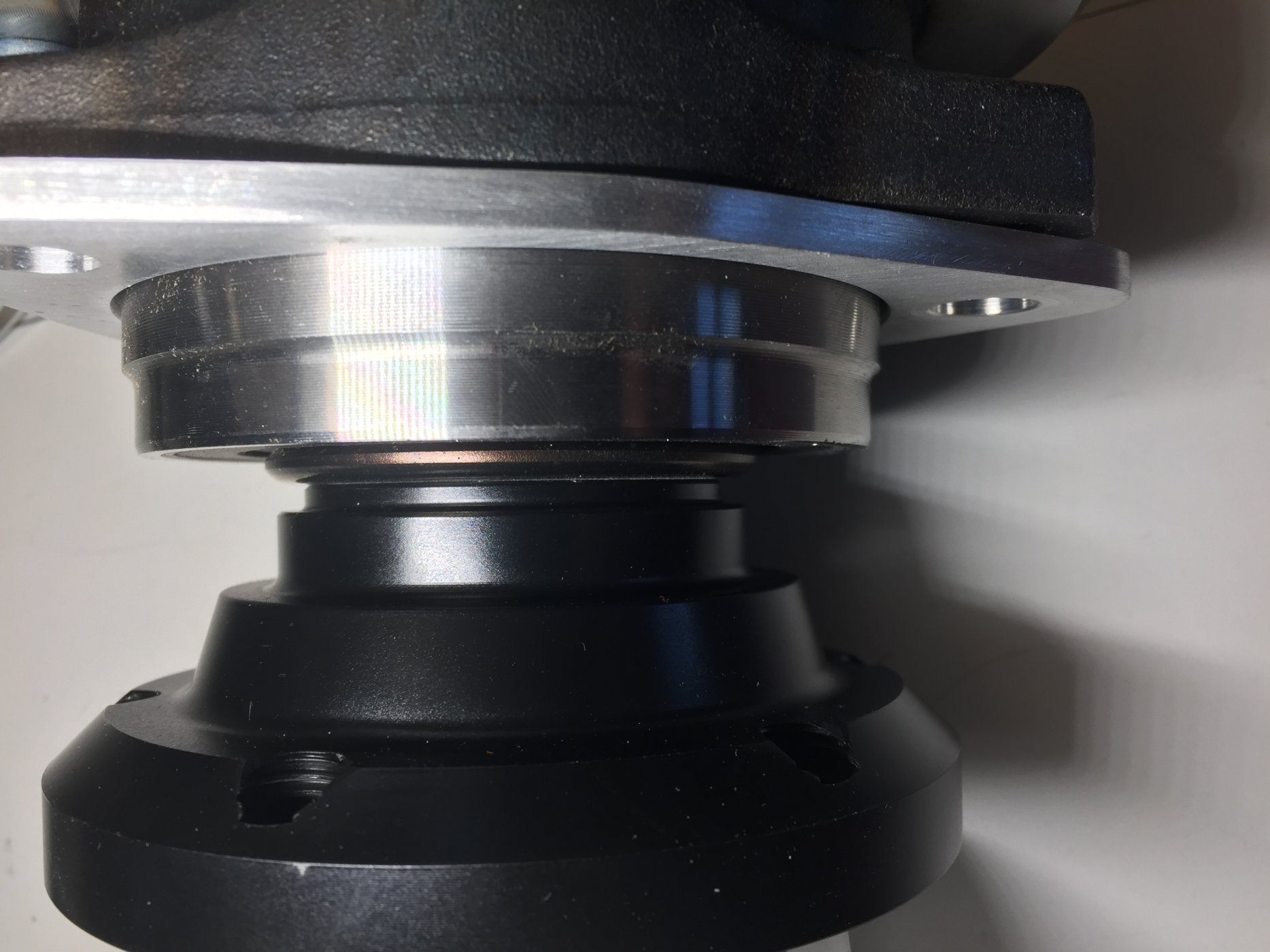 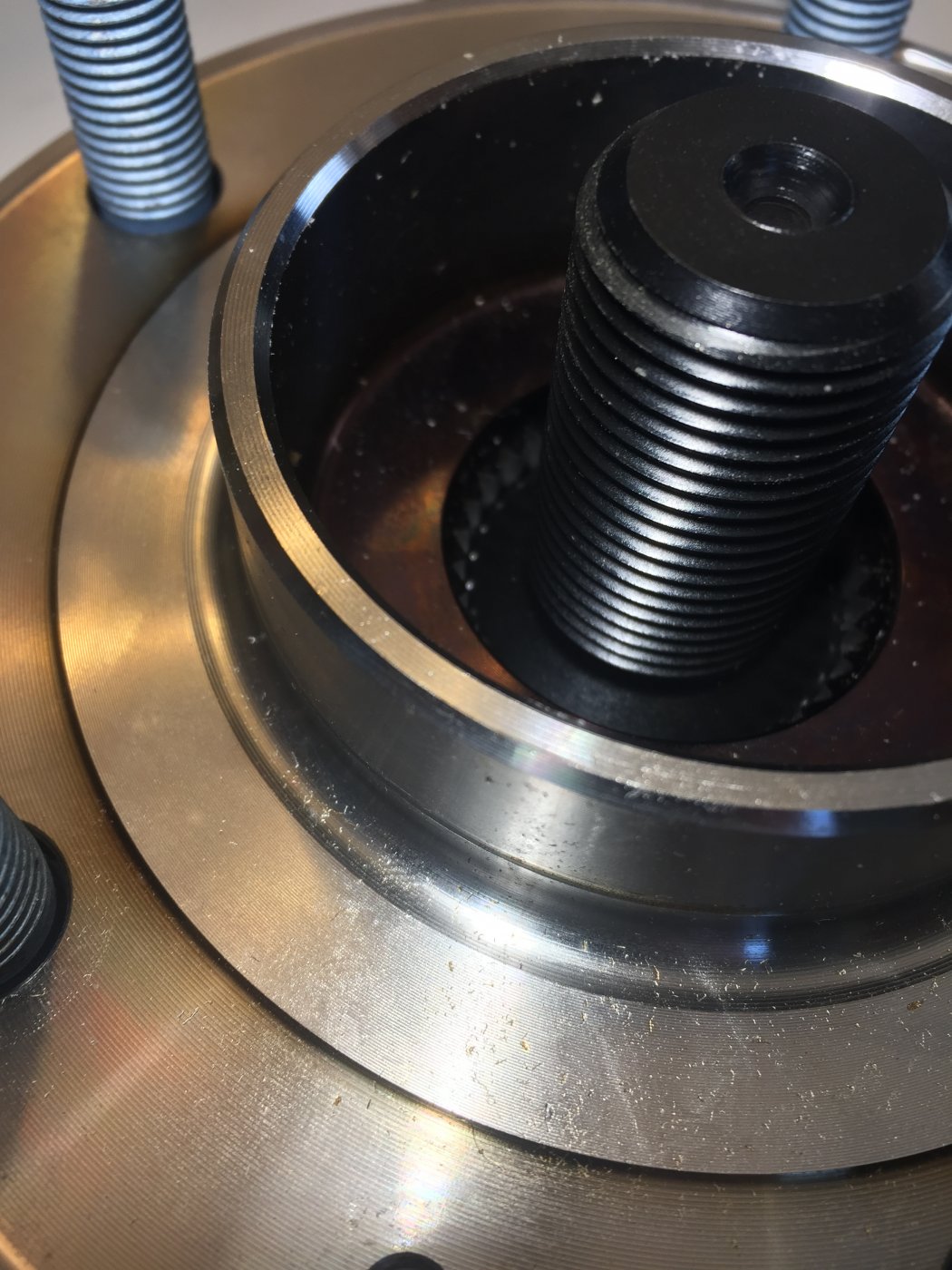 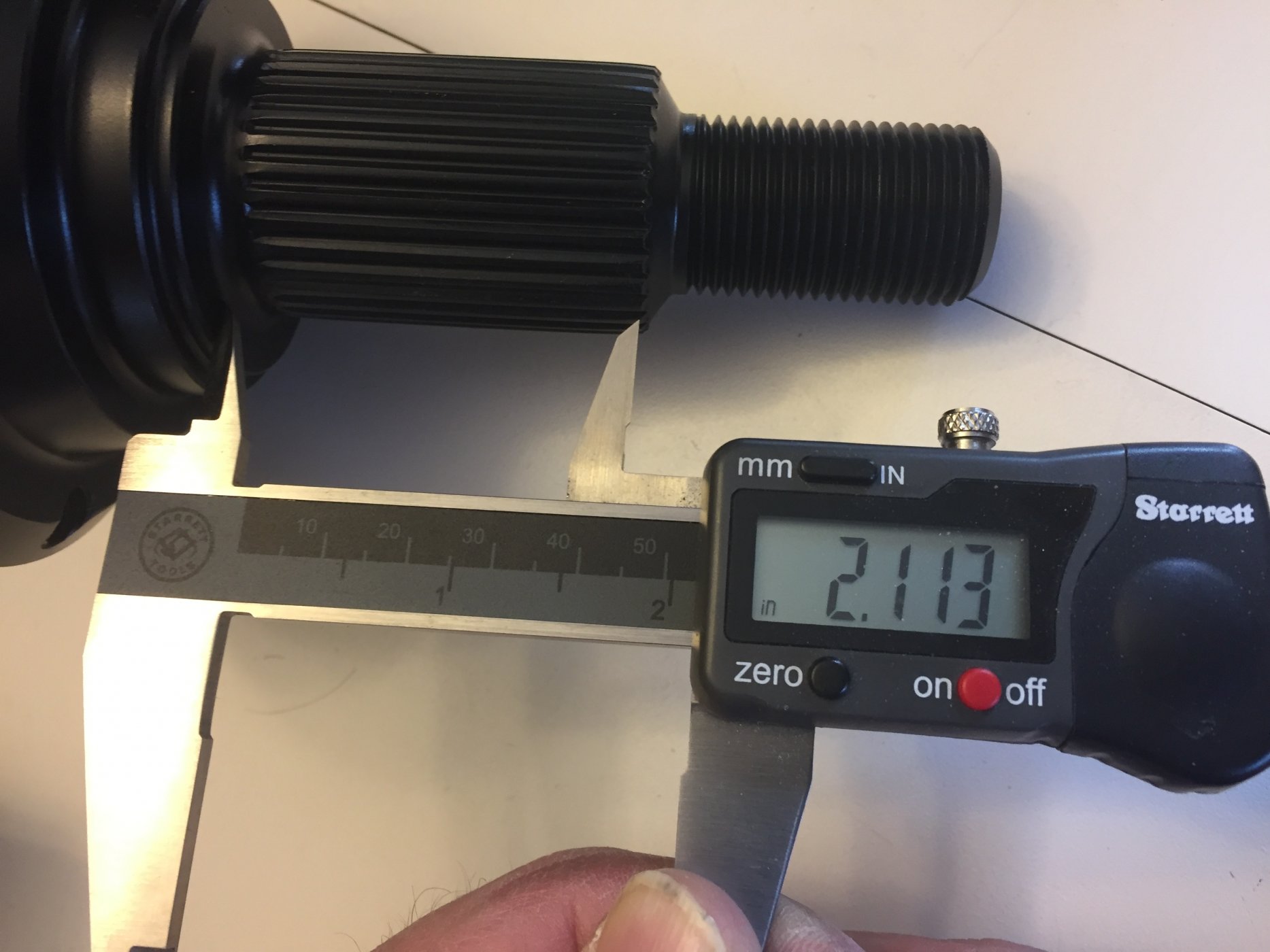 Supporter
For a visual quick comparison here is what a DSS stubshaft looks like.

My apologies Scott. I forgot the upgraded uprights and hubs you are using came with the C5/early C6 hubs. and 30 spline stubshafts. My parts are the C7 hubs and 33 spline stubshafts. Feel free to have a moderator delete my two posts! 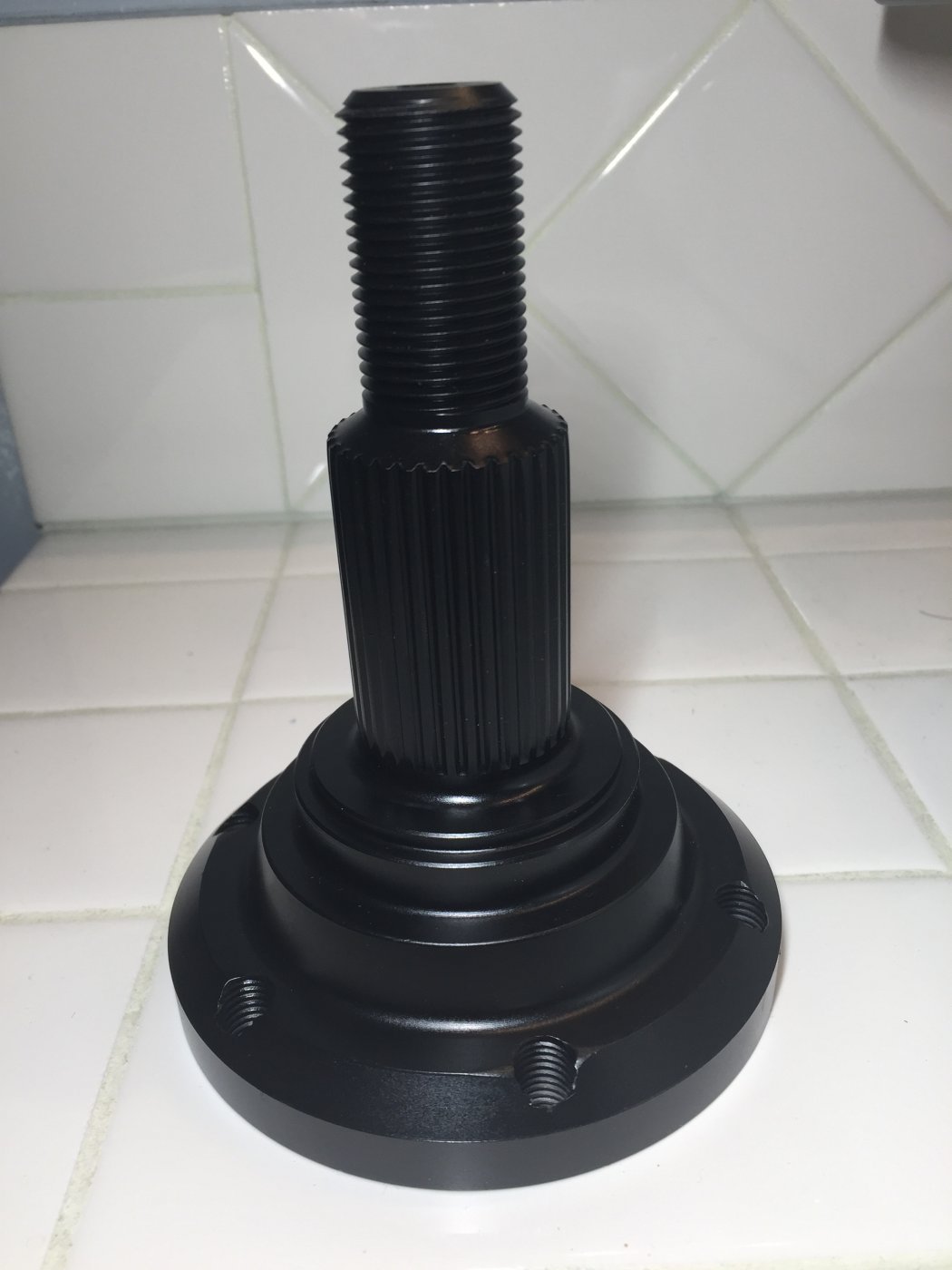 I have the new setup from RCR and just went out to my shop and stuck an indicator on each side. Drivers side has 0.023" of shaft end play and the passenger side has 0.015" of end play. I do not see any part numbers on my hub as shown on yours. I have not had my suspension apart yet to verify everything, that is coming soon, so I cannot comment as two wether or not there is a spacer on the new setup. 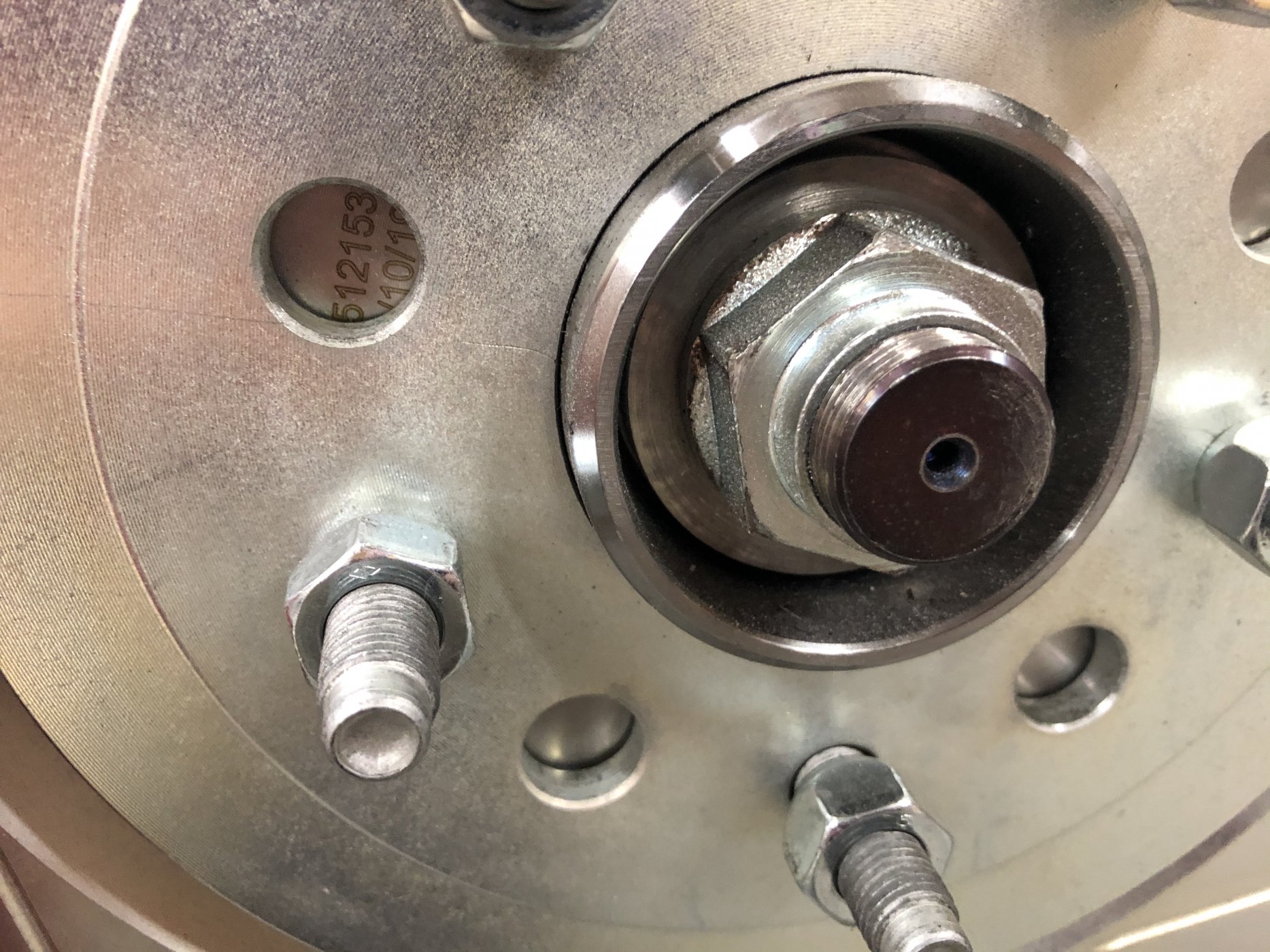 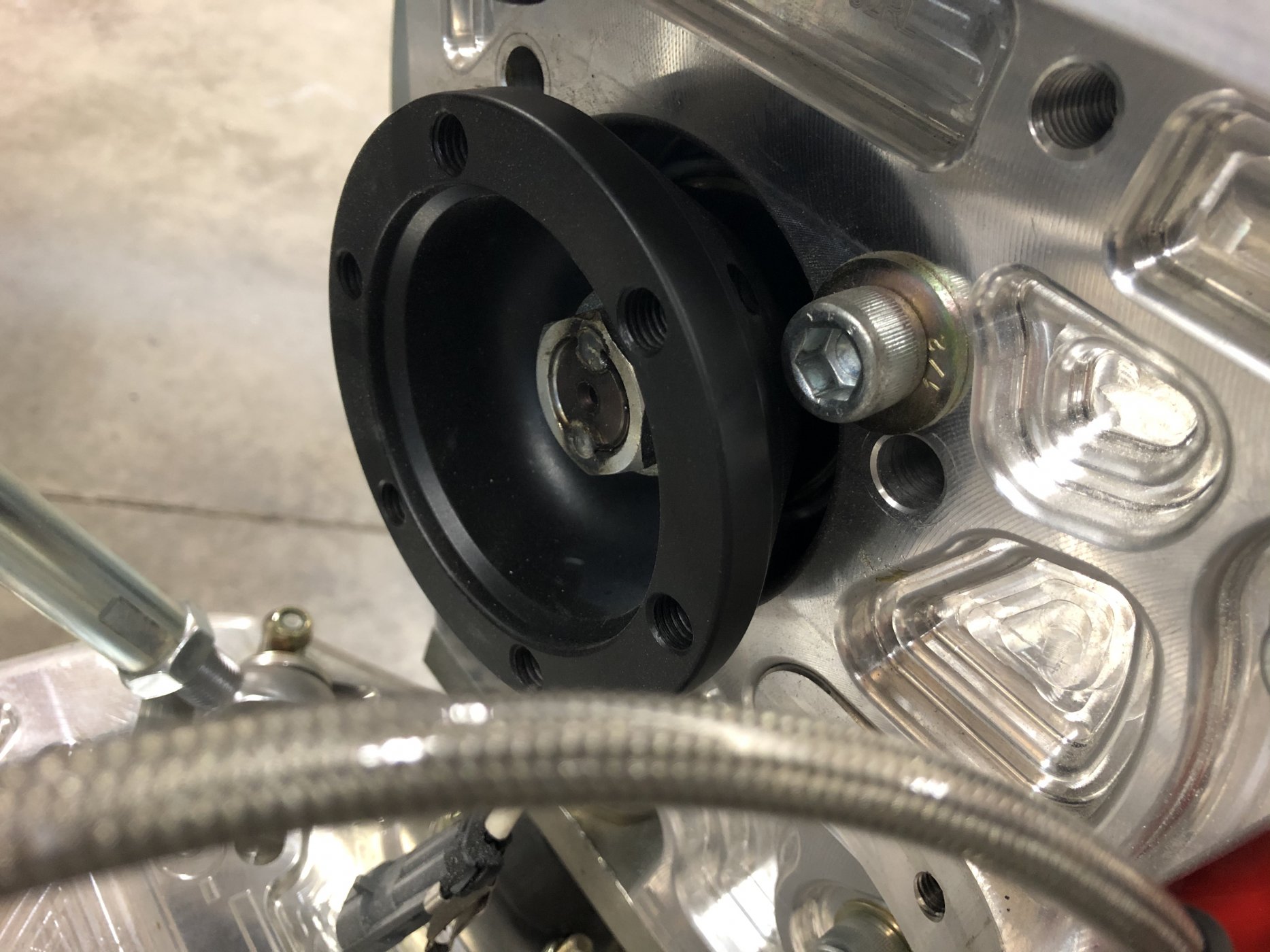 I had a mid sized pickup years ago that the rear axle had about 1/4" of end play in it. Dealership said it was within specs. You could grab the rear of the truck and shift it side to side. That was the last truck I ever purchased from that manufacturer (between that and all the bearings, bushings, u-joints, ball joints. etc. that wore out with less than 40,000 miles on it).

Supporter
Scott. When I put my new stub axles through my C6 rear bearings I used .250" spacers on the cv side.

My stub axles are from The Driveshaft Shop, but the splines measure 2.5" which, as I discovered, is too long for a GM hub. I would rather not use any spacers. Given my power level and that I'm going to purchase new stub axels, it makes sense to upgrade from 30 to 33 splines. According to the DSS website the 33-spline version "should handle 1,800 WHP."


https://www.driveshaftshop.com/domestic-axles/chevrolet/corvette/2009-2013/c5-and-up-to-2008-c6-2004-2008-ctsv-wheel-flanges-to-fit-a-108mm-porsche-930-cv
You went with the C7 hubs which are less expensive, but require a spacer. Other than cost, are there other advantages to the C7 hub vs. the SKF racing hubs listed below?

I'm not sure which to go with. My understanding is that the primary difference is the connector for the sensor which I'll replace with Deutsch connector. Do you have any thoughts on which I should go with?

Supporter
Those are the 33spline stubshafts I bought from DSS. The C7 hubs were used due to their price (much cheaper than a C6 SKF Race hub). They are basically the same size as the C6 ZR1 hub. They still are a race hub in design. The only real difference is the fact they don’t have a built in sensor. My sensors are external.

Here are some part numbers:

Supporter
The C7 hubs I went with did require a spacer (on the 3 bolt mounting flange) only due to the fact I used the original modified uprights. If I used C6 33spline ZR1/SKF Race hubs I still would have required a spacer.

In your case you could use either one. The only real difference is the price difference between them and the fact the C7 hubs don‘t have a built in sensor.

Supporter
Here is the correct part number for a 30 spline billet hub from The DriveShaft Shop. 108-GM-0-30
Perhaps you can just exchange them (Yours looks like two pieces bolted together and then the nut tack welded to the shaft). The billet 30 spline version is rated for the same HP as the 33 spline version

Supporter
Here is an additional measurement that may be important Scott. Your stubshaft in post #544 looks a lot deeper than mine. The 33 spline billet DSS stubshaft may not fit without the special machining like we did with the older version upright. Your stubshafts must be a custom spec part made for RCR. You may have no alternative other than having the stubshafts remachined correctly. 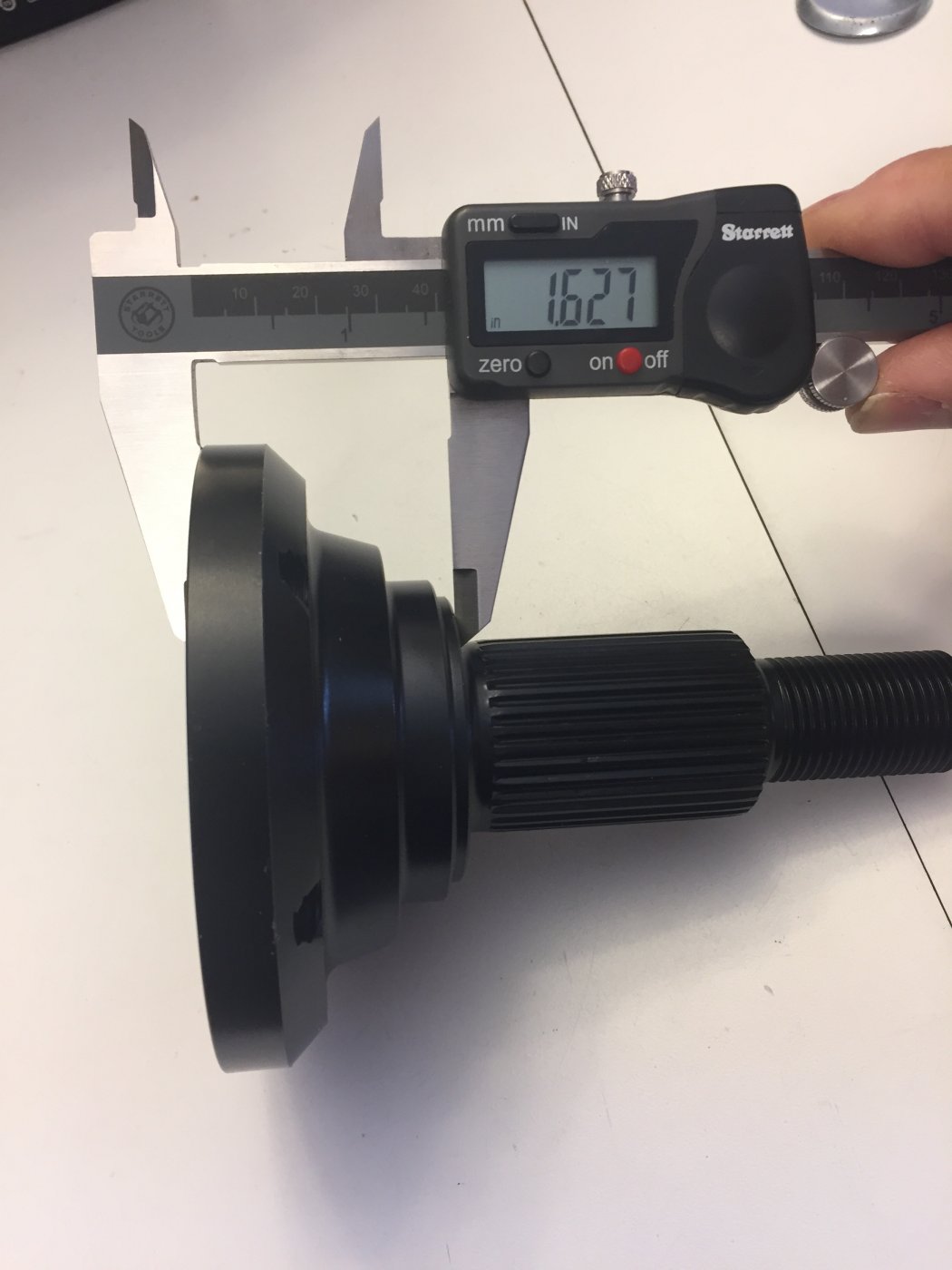 Please keep in mind that it has a passive sensor. I know you have these Scott I just thought it would be useful for others following along.
Last edited: Oct 10, 2020

Supporter
Scott. I was in error when I said I used a .250 spacer. I did try a spacer originally because the large OD of the stub axle flange interfered with the upright. I remembered I didn't want to use a spacer so instead I chamfered the inside of the upright for clearance between the flange and upright. My stub axle is a 33 spline. The spline section to the start of the threads is 2.250" The threaded section is 1.625". There is enough thread to fully tighten the stub shaft to the hub. 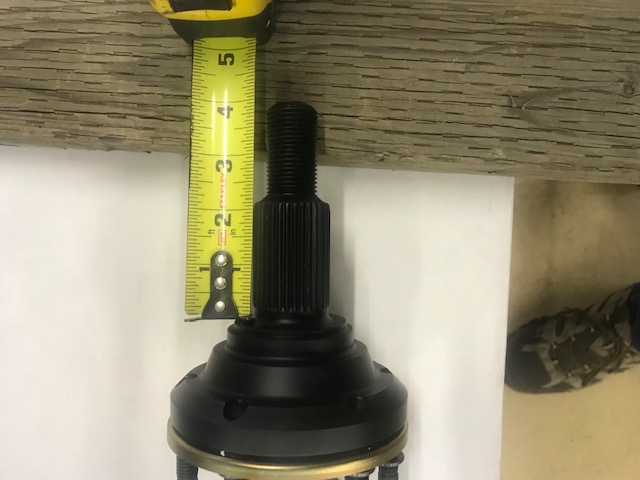 Supporter
Roger, Scott has upgraded to the newly released uprights that are especially made for a C6 style bearing. Your uprights are like mine (the old style) which we remachined to accept the C6 or C7 bearing.

I looked at the pictures in your build thread. In addition to chamfering the inside of the upright, it looks like you also machined recesses for the three socket head cap screws which is pretty much what Ken did. I assume that I can do the same. However, my current stub axle provides very little space to run the sensor wire. through the upright. Ken is running C7 hubs with tone rings on the CV joints (i.e., no sensor wire in the hub). Which hubs are you using? If they have sensor wires, how did you run them?

Supporter
Scott. I'm using C6 X Tracker hubs. Only my front hubs have sensors. No sensors on the rear hubs. If I run traction control I will use the tone ring on the inside cv joint.
S

Supporter
Scott, sorry to hijack. I was told you might have a LHD steering rack for the SLC laying around? If so, willing to sell?

Supporter
Call RCR and tell them what you have found. Send a picture from your phone of the two stub shafts showing the discrepancy in thread length. Simply ask that they exchange them and send you a set that has the threads extending to the root of the shaft so as to not require spacers.

I have done an extensive thread that addresses this new bearing issue and you can find it elsewhere. I ended up using the 33 spline Driveshaft Shop pieces. After 8 full track days, about 1000 track miles I have had NO problems related to the C6/C7 bearings and DSS stub shafts. The above pictures of the DSS stubs appear to be the same as mine.