How well did dip paint work on fiberglass? Just curious if it was durable and not easy to scratch. Witch products did you use?
C

kelly galloway said:
How well did dip paint work on fiberglass? Just curious if it was durable and not easy to scratch. Witch products did you use?
Click to expand...

It worked quite well actually. The dip is fairly resilient - in fact a portion of my front bumper area is a mix between conventional paint and dip. I've taken a couple of rock hits and have chipping on the paint but the dip areas look fine. I guess it depends on what you're scratching it with but the dip can be "healed" with a product called DipCoat, that stuff also makes the dip feel less rubbery. It never really "hardens" to the point of being .. well, hard

I'd say as far as product finish/appearance goes it'll depend on how good you are at applying dip. I've seen 4k vinyl jobs that looked about the same as what I did, and I'd never touched an HVLP gun prior to applying dip to my car. There's a learning curve so I wouldn't expect your first job to be 100%. I've gotten a decent amount of flack from people online about the quality of the job but in person no one's had the guts to tell me they didn't like the way the car looks.

I used the advanced sprayer from dipyourcar.com and their performance series line of dip. I have a bunch more product waiting to go as I plan to change the color in the next month or two.

If you haven't already seen it, I have an entire blog article about the whole experience here:

Looks awesome. I think I'm going with matte or satin finish black or gunmetal. Should look good with gold wheels. Thanks.
C

Went to the local cars and coffee this past weekend and it was a total bust - rain in the forecast so no one showed up. I pulled over to text my father-in-law not to come by then this happened ...

I gotta ask... Did you put on your headphones when she got in the car? I wish I didn't have mine on watching this, haha! She was almost too hyped up, can't say I've ever seen someone so excited, but awesome she is about cars...and especially your SLC!

Watching your videos, I get antsy knowing the attention that comes with the SLC. I know this is definitely not the car if you want to be incognito, but will be good to get out of my comfort zone.

LOL ! That was fun, can't help but put a big smile on your face. It did mine.

You have a big heart Cam. That is an experience she will never forget. Well done!
K

Hey Cam just wondering what alternator part # you used on your slc I'm running ls3 525hp . Thanks a bunch!
K

Also what fitting sizes for graziano clutch and trans cooler . I received fittings with my gearbox completion kit but they don't fit anything on graziano.
C

kelly galloway said:
Also what fitting sizes for graziano clutch and trans cooler . I received fittings with my gearbox completion kit but they don't fit anything on graziano.
Click to expand...

Check out post 16 from my blog for those details. Sorry, easier to refer you to the link than type it out

I’m not sure what the part number is on my alternator. I’ll see if I can find the paperwork. It’s a 145 amp unit that I paired up with the Dirty Dingo Mount.

Right on I'll check it out.
C

Sorry Kelly - looks like I may have tossed the paperwork for my alternator :/ I Picked it up at a local alternator repair place for about 150 IIRC.
C

I've been so busy lately with Life that I've not been able to get very much driving in with the SLC. Last week I went to the local Cars & Coffee (same one that was a total bust last time) and we had the biggest turn-out ever, about 20 cars! I'm hoping that by bringing the SLC to our local C&C it'll draw more attention and get more folks to come out. It's literally 2 blocks away and the local businesses could use a little support. Funny enough, I ran into 3 co-workers; the gentleman organizing the event happens to work for the same company/different site and 2 other folks, one of which is transferring in to support the project I'm working on. Talk about a small world!

This morning I'd planned on going to another local-ish C&C, about 100 or so cars usually turn out to this one. I got up and started getting my things together when I decided - screw it, I'm going to take the SLC out onto some back roads instead. Man, what a great feeling to be hitting the corners again with the SLC! The canyon gods smiled upon me and gave me mostly empty roads. The occasional traffic I hit was super kind and pulled over so I could pass shortly after I'd catch up to them. Last bit of the drive was a bit damped by a civic that refused to pull over even though he was 50-pencing every turn and constantly on/off his brakes. Whatever, we weren't too far from hitting the main road by then anyway.

I can only imagine how much fun it must be for the guys taking their SLCs out onto the track, the car's got so much grip and it's so well balanced. I remember when I first went from street to race compounds on my sport bike - I felt like a god with all that grip! Must be similar going from street to slicks in the SLC. That and actually getting enough speed to really feel the aero kick in. I don't think I've really driven the car fast enough in turns to really take advantage of the big rear wing so it's mostly just looks on my car. Wing on or off, I think the race tail's a real looker. I might play with removing the wing at some point in the future, maybe with my next repaint.

Anyway, OK, lots of rambling but here's a small nugget of information that others may find helpful. I installed an Elite Engineering PCV oil catch can some time back. There's some debate as to whether I have my PCV lines correctly plumbed, no need to re-hash that. With how I've plumbed my PCV, I'm definitely getting a good amount of oil pull-over into my intake system. I collected a surprising amount of oil for ~200 miles of driving. Here are some pics: For y'all LS based folks, I'd highly recommend considering adding a catch can to your PCV system if you haven't already. Most of us aren't putting very many miles on these cars, but my car's definitely benefitting from this upgrade!
M

I have been running one for years on all of my Gen 3 Hemi stuff and at each oil change I probably have half a cup or so. They do work.
F

Supporter
I have read that the oil in the intake can make tuning a challenge as it contributes to detonation. Forced induction makes it a larger concern. I went with the Elite system as well.
C

Have been having fun driving the car - at 1F/2R it’s *just* a touch soft for the canyon drives. I’ve bumped each corner up by one click and will hopefully have time this weekend for another drive. I’ve also lowered the rear about half an inch for aesthetics.

I was at a recent car meet and the crowds were particularly aggressive, had a tough time stepping away, not wanting to offend people. Decided I would create a short storybook on the car to answer the basic Qs that I can leave with the car. Blurb.com was having a promotion and it worked out to about $8/book after shipping. It’s a lot lighter than the monsters I made before but makes for a quick read and I won’t cry if it goes missing. 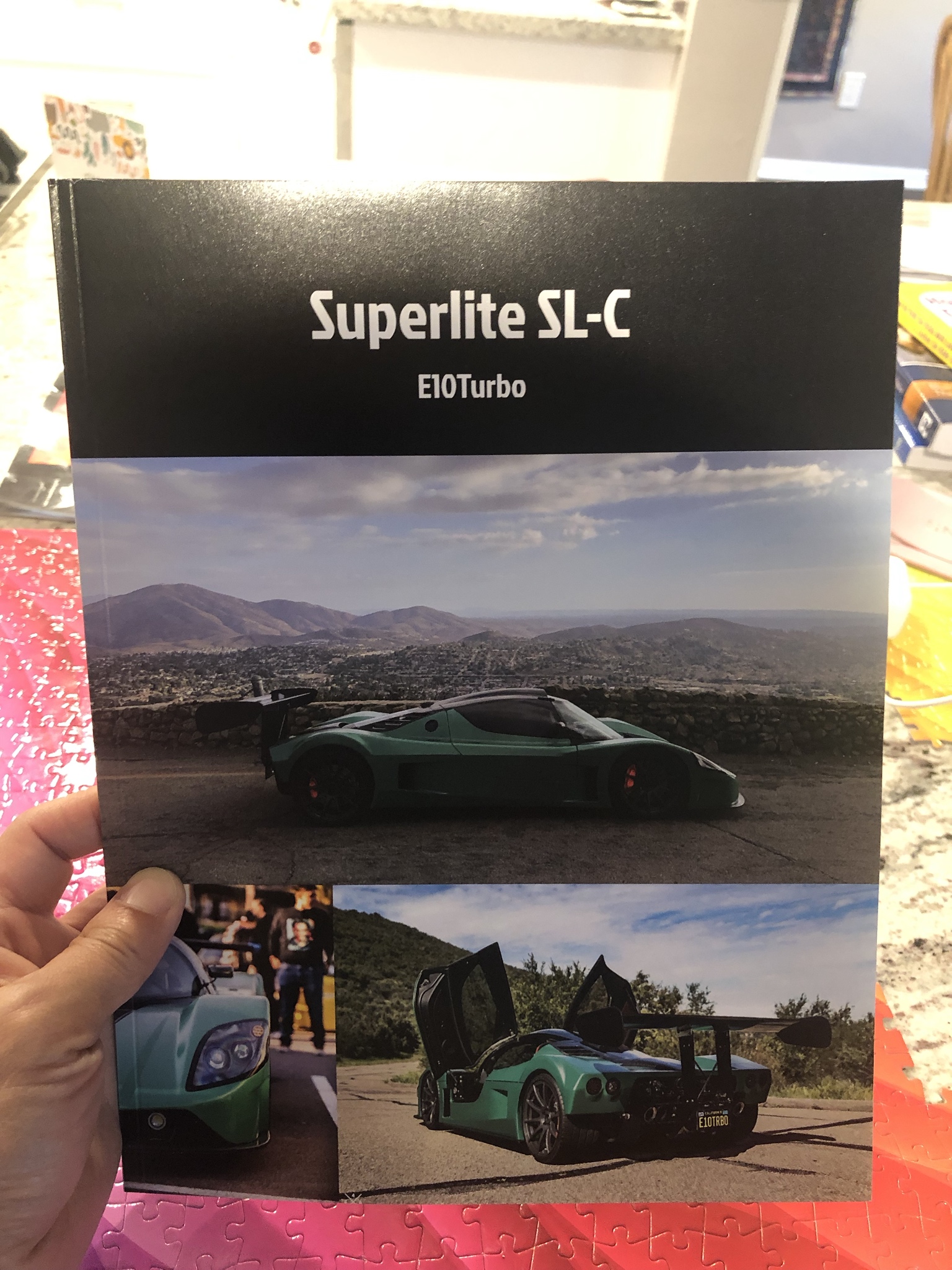 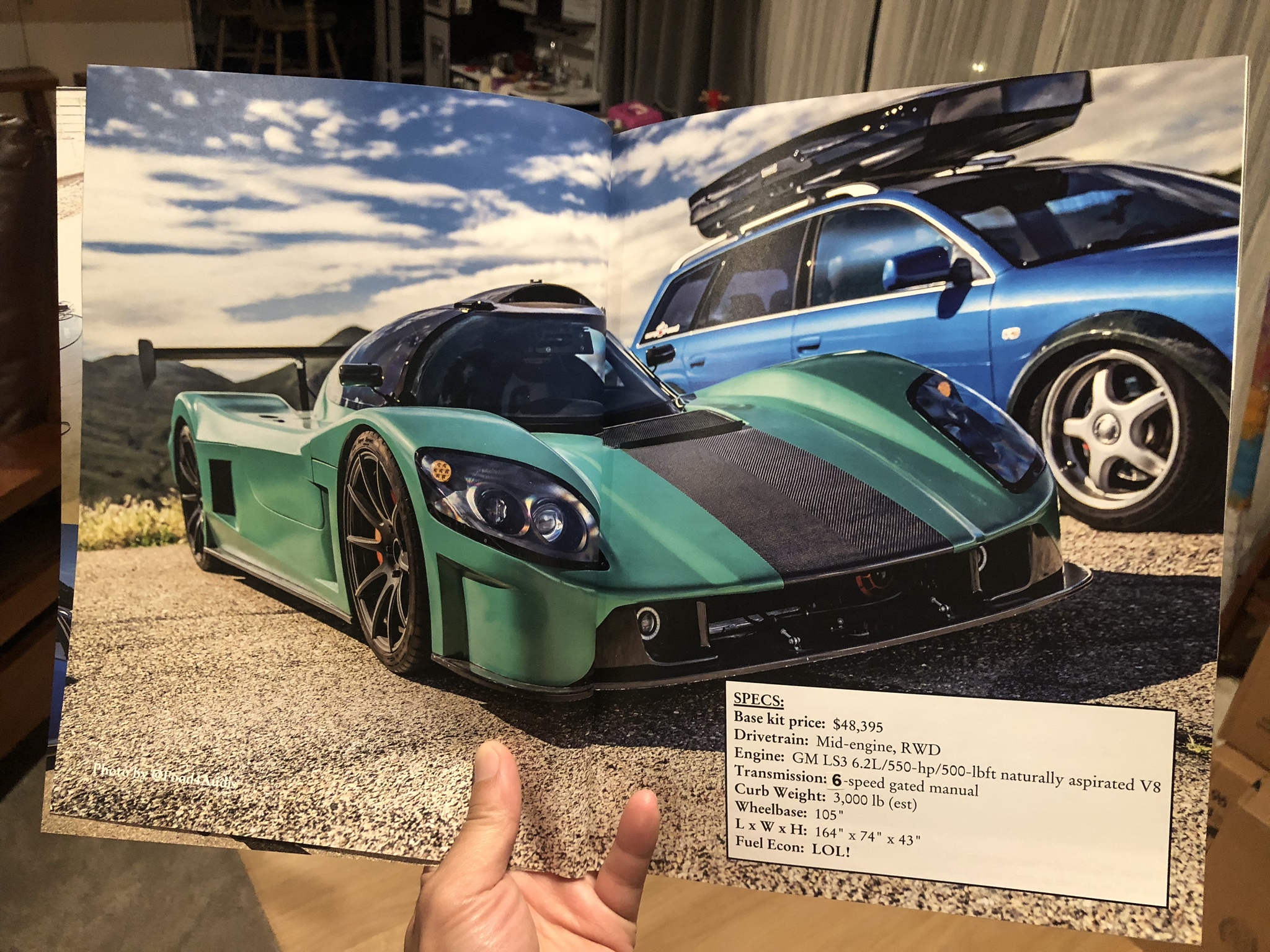 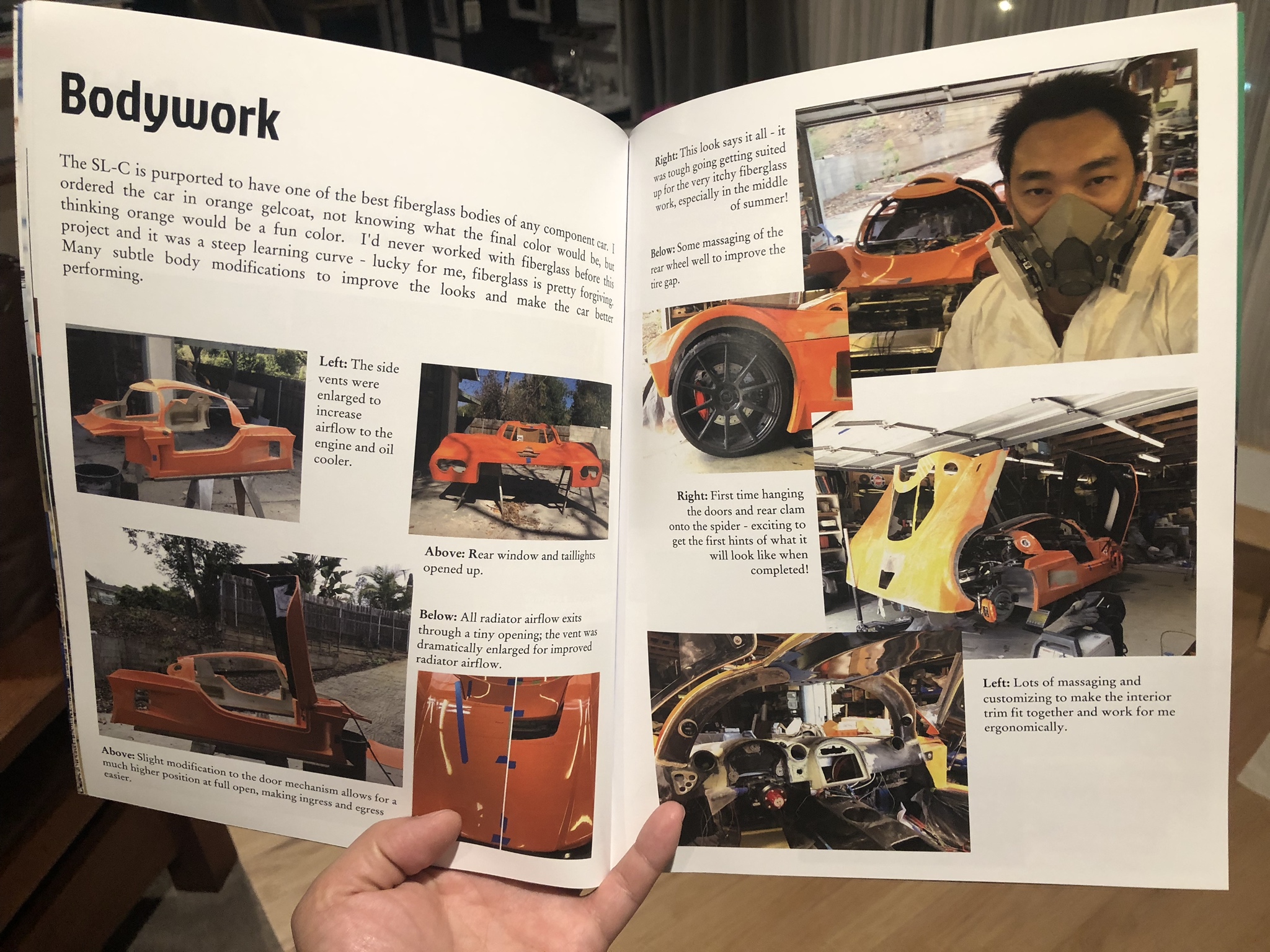 I parked next to one of the most well known cars in the area, has a lot of sponsors, that kind of thing ... probably about a 10:1 ratio in terms of crowd that day. 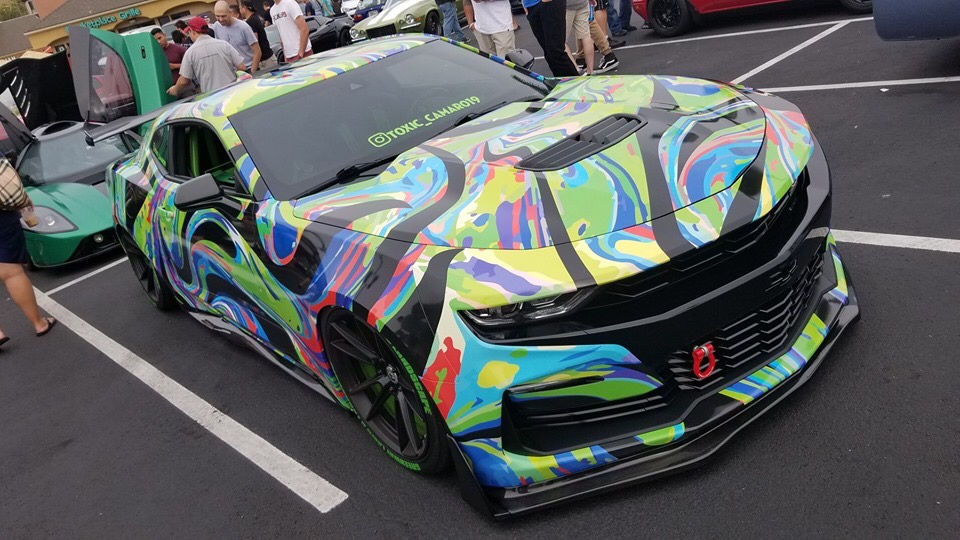 Also added some flair to my rear wing, need to get a better shot but I never bother to stop and take pictures when I drive by cool spots. Cookies for whoever figures out what it means. 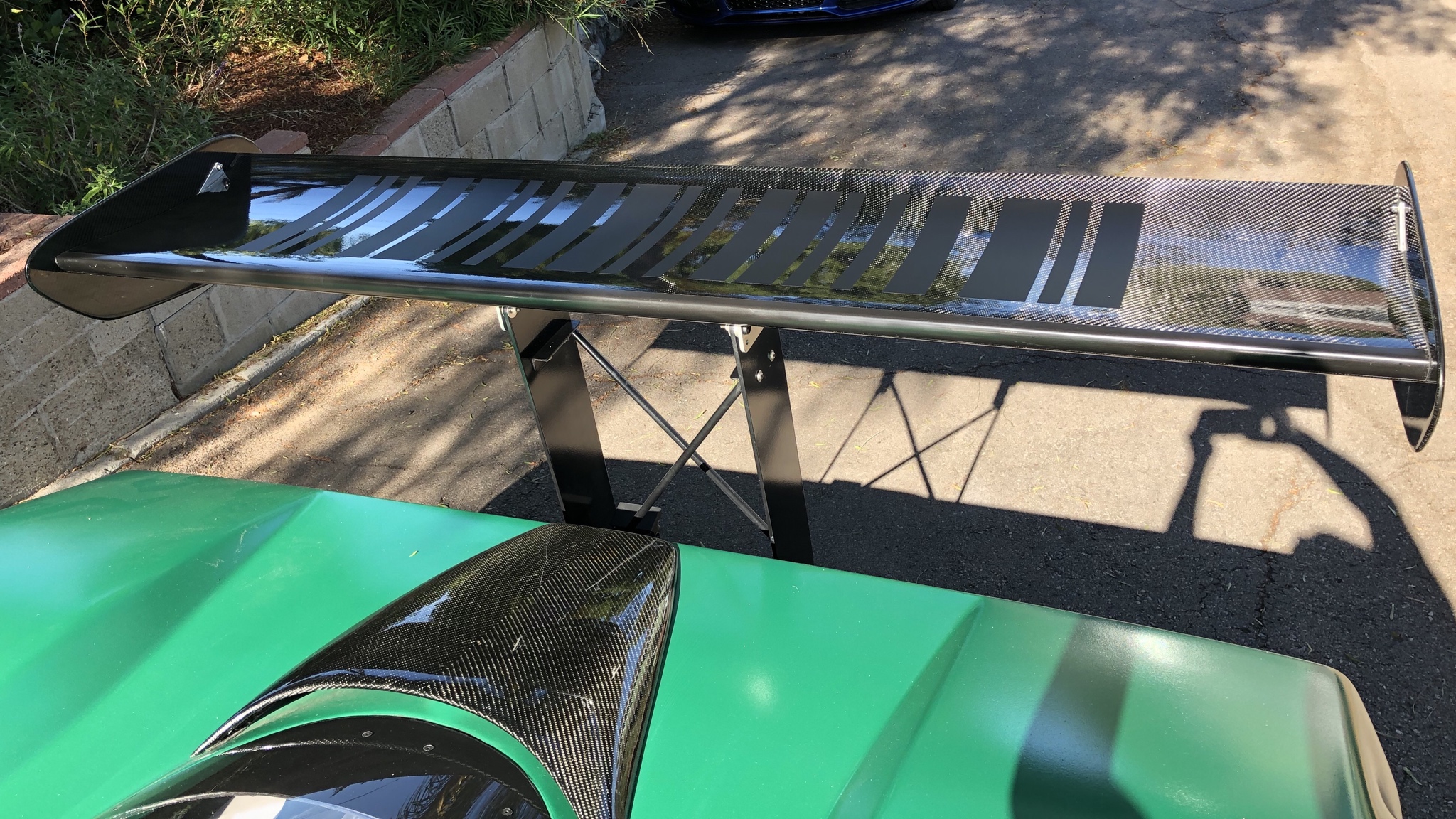 The devil is in the details! It's a Code -128 barcode. Decoded it stands for SLC. Very nice! I'll take chocolate chip if you have any ... Oh and if Blurb runs another promo on the books i'd love to buy one.
C

CorvetteCody said:
The devil is in the details! It's a Code -128 barcode. Decoded it stands for SLC. Very nice! I'll take chocolate chip if you have any ... Oh and if Blurb runs another promo on the books i'd love to buy one.
Click to expand...