i have been running a 302 in my gt40 for two years now, & i am as happy as a pig, that was untill a friend took me for a ride in his hilux - with a lexus v8. what a mind-blow, goes like a rocket & it sounds just like a merc 63 amg. i am now wondering what that engine will be like in my car.

not sure if anyone's prepared to come out of the closet on this one, but has anyone gone this route? & what;s the concensus, feedback, advice, picks.

Admin
Sounds like you need some new heads, a cam, and better induction on your Ford. Maybe a little stroker kit too. Then you can take him for a ride.
G

First I saw the heading.
Then I saw Ron Earps signature!
Immediatly I thought What The F*^K is going on?
Then I read the thread.
All is clear now, I'm with you on this one Ron!

Lifetime Supporter
I was bit by the Lexus V8 bug a number of years ago and really enjoy them. Wonderful engineering, and the music they make above 6000 RPM is something else. You can get them for a song (less than $500) on eBay, but they're very costly to hotrod 'cause you can't just go to Summit or Jegs for go-fast parts. Most stuff has to be fabricated, or at least adapted. It's not unusual to hear of someone buying the basic motor for $500, then tearing it down and putting another $10K or $15K into it.
D

Ha ha! To some on this forum you've just said you want to kill grandma, or at least their reaction would be about the same!

Do it! (the engine not grandma).
F

Again an old thread but wtf, should someone be interested in it here is a picture of one with the dimensions on it.

And the mounting plate

Hard to tell exactly, but if the M dimension (rear block face to cam sprocket) is really 25.8", it puts that about 2.5" inside our cockpit, right in the middle of the top of the seat.

Supporter
Certainly a sweet motor --quite a few being run in 40s and Cobras in Aust. -- no one talks about them much because they are so embarrassingly cheap and reliable --stock manifold, throttle bodies, supercharged or turbo, NOS no problems:thumbsup:
L

What can I say? I've already voted! I'm hoping to fire the big girl up in a few weeks.

Bob Putnam said:
Hard to tell exactly, but if the M dimension (rear block face to cam sprocket) is really 25.8", it puts that about 2.5" inside our cockpit, right in the middle of the top of the seat.
Click to expand...

This Popular American V8 Engine Dimensions says the 302 is 29 inches so it would make it 3.2inches shorter than a 302. I find it hard to believe that would stick it 2.5" inside the cockpit!

From a quick and dirty model with IIRC a UN1 there was a lot of room at the front of the engine.
Last edited: Sep 15, 2011
F

Lumpy said:
What can I say? I've already voted! I'm hoping to fire the big girl up in a few weeks.
Click to expand...

And supercharged it too!
B

fastdruid said:
This Popular American V8 Engine Dimensions says the 302 is 29 inches so it would make it 3.2inches shorter than a 302. I find it hard to believe that would stick it 2.5" inside the cockpit!

From a quick and dirty model with IIRC a UN1 there was a lot of room at the front of the engine.
Click to expand...

Our bulkhead slopes quite a bit, so the sprockets at the top of the engine are going to intrude quite a bit on our layout.

Our typical setup is 26.3" from the rear block face to the front of a dual lower pulley. Add 1.5" for a shorty water pump, which intrudes into our cockpit between the seats by about 1/2".

Maybe we've moved the rear bulkhead back further than some for extra interior room.
F

I think I have to stick the rear bulkhead into my model and get both a proper distance from front of a 01E to centre of driveshafts and how far from the rear 'U' the driveshafts should sit.... It's a little tricky to measure without yet having arms and uprights!

Lifetime Supporter
I'm acquainted with the Dutch guy who originally took these measurements (and he's a member on here too), and IIRC, that "M" dimension was supposed to be a worst case overall length, and included the original distributors (not shown), which stick out past the cam sprockets.

The dimension from the rear face of the block, where the bellhousing bolts up, to the front of the dampner is the "G" dimension, which is only 22.83"

They're beautifully engineered and built motors inside & out, but have the same firing order as the old SBC, so they sound a lot like that motor up to 4500-5000 RPM, but they really start singing their own song after that. Haven't heard one with crossover headers yet. Lance how does yours sound with crossovers?

Here's one of mine on the engine dyno a few years ago. It made 498 HP at the flywheel @ 20psi, with a set of misground exhaust cams (note the methanol afterburning at the end :shocked.

I haven't had the engine fired up yet, so can't say what it sounds like with the crosovers.

I should be able to let you know in a few weeks time.

I'm the one that took these foto's and put the measurements on it years back in speedon's workshop over here in holland.
the M measurement is indee the worske case senario. the top rad outlet on the engine is sticking out a bit in front of the crankshaft pully line, this however is as you can see in the front picture a plastic part so not very easily modified, on the other hand it's just a themostat housing so there should be an alloy verssion on some other engine that can be made to fit and not stick out.
(I think an LS1 item or such will do the trick when the bolt ears are welded in the right position)

In the end I did not use the engine because of fitment isues in the GD chassis. I do still have the inlet manifold with the laminova intercoolers in it. still plan on using it some day.

Thse indeed sound very good on high rpm, yesterday I saw one in e "Luego velocity" sven type kitcar. that thing is scaringly quick and evenly loud. the note of the engine above 4000rpm is very nice

BTW: where did you get Erol's drawing of the engine rear? I don't think it's meant to be published.

Thomas Rouw said:
I'm the one that took these foto's and put the measurements on it years back in speedon's workshop over here in holland.
Click to expand...


Thomas Rouw said:
BTW: where did you get Erol's drawing of the engine rear? I don't think it's meant to be published.
Click to expand...

You mean the 1UZ Bellhousing Bolt Pattern (or mounting plate as I originally called it)?

Can't remember, sorry. Although I did link to the original I found rather than copy, its pretty public though, its available here as well for example.

Hmm that should be fine then, when erol emailed me the original cad file years back I had to swear secrecy.

Lance's engine in the piccies above is one engine I would love to hear once.
32valve V8 with M90 roots on high rpm and 180 degrees exhaust should be able to scrare even beelzebub himself. please post some decent audio/video footage of that engine on song, prefferably a high rpm drive by.

I build a twin M45 1uz a few years back, but didn;t get a chance to fit it in anything, switched to ls1 after that.

Found exactly where I got it from now:
Dimensions on 1/2/3 UZ blocks &bull; Toyota 1UZ-FE & 2UZ-FE V8 Technical and Performance Forums
F

I should add a note here that the diagram I previously posted is the mount from the original bell housing to a gearbox, the actual engine mount is almost circular.

This btw is the bell housing. and this is the actual engine mount 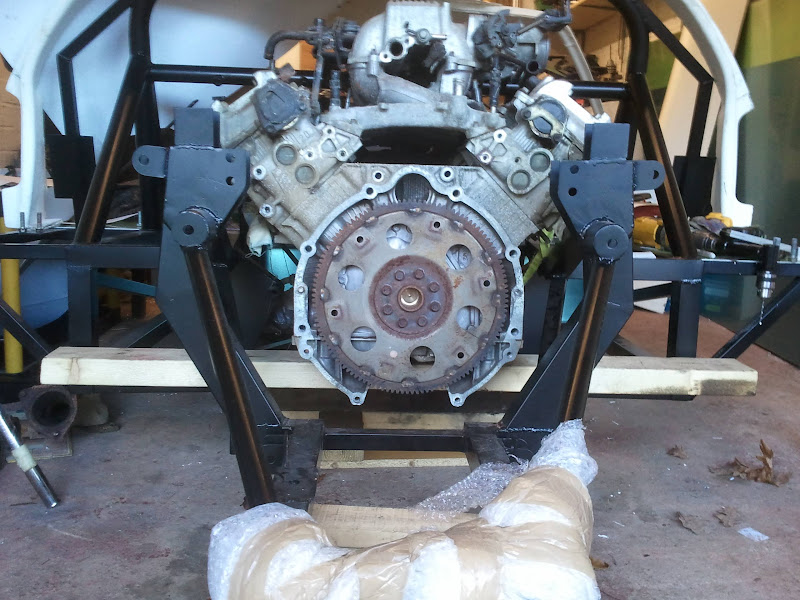 To address the previous point that the cam sprockets will be in the cabin, the engine here is 3cm forward from where it 'should' be. There is zero intrusion. 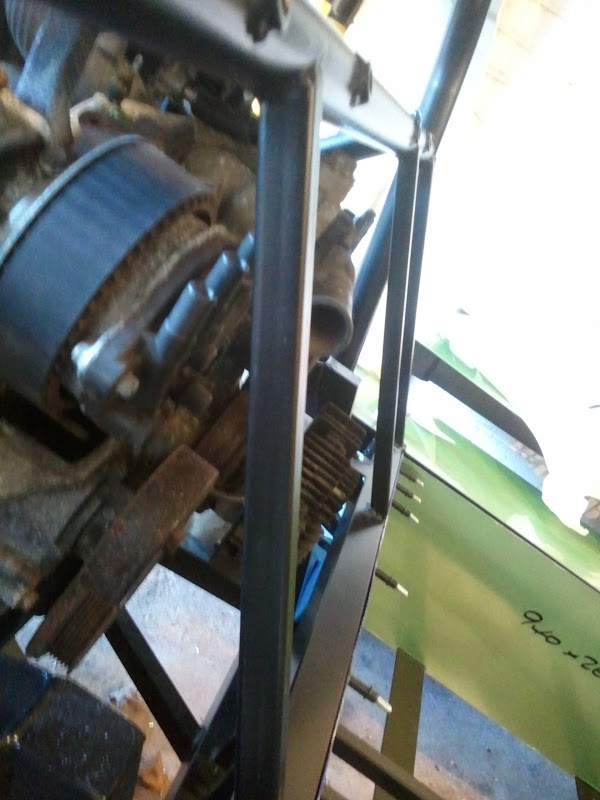 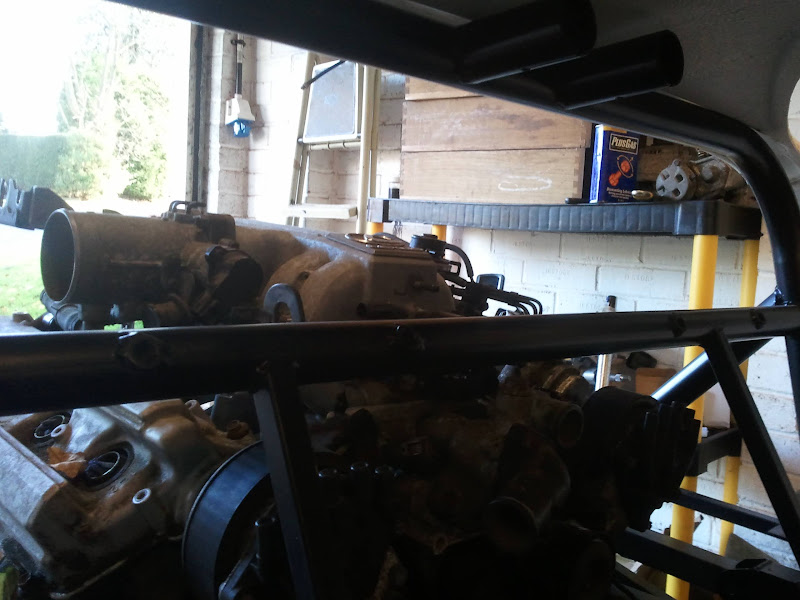 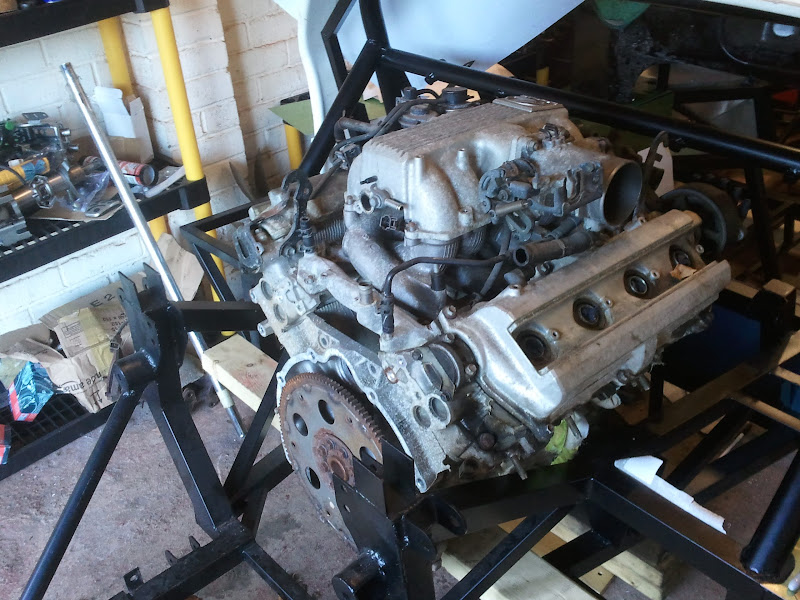 Having sat one in my chassis, there are only 2 issues with fitting one in a GT40 chassis.

1) Depending on chassis make (I think Tornado would be fine), the rearmost exhaust port is tight to the frame rail. It might need a bit of chassis work to clear.
2) The oil filter points at the frame rail. It'll need a remote filter kit or to lose the oil-water cooler, run a tiny filter and remove the engine every filter change...