It would take me a week to write this in my own words! First three paragraphs are of concern to your engine build
Click to expand...

So I need to get it down to 0.04 (i.e. the thickness of the head gasket; assuming I have enough clearance with the valves on the piston?
J

Yes or as close as possible.... your priorities are out of whack, achieve the correct deck clearance and then obtain the correct valve to piston clearance by machining the valve pockets in the pistons if necessary, you like so many other builders on here of course are quite likely to say ...oooh to much work.... like most things the devil is in the detail.

So that is how/where the other 0.015/0.016 come from.... in the 80's/90's the piston manufacturers realised that the oversize pistons/rebores were raising compression slightly so they all got together and decided to reduce the comp height slightly to maintain the factory comp ratio ratings, at the same time fuel quality at the pump was dropping and as a result the extra deck clearance created the 'pinking' problems we now know is due to the excess deck clearance. The 'better' performance piston manufacturers now realise this and are making pistons with 'correct' comp heights and machining 'reverse' domes/dish's in the piston crown where comp ratio is too high.
Last edited: Nov 2, 2015

Moderator
Jac, I am still continuing to learn, hence my questions, so apologies.

brettmcc said:
Jac, I am still continuing to learn, hence my questions, so apologies.They reckon when you stop learning your dead, as I don't know who 'they' are Ill take some comfort from that and keep on learning myself

So whilst I have a D1ZM Mexican block the stamp date on the block is later than the D1 would suggest. It wold put it in the 73-76 range, which would give it a 8.229, rather than the 8.206 consistent with the earlier blocks? Does this not then in turn correspond to the 0.034 clearance that I am currently seeing rather than the .016 in the earlier blocks? That's why I asked the question above.Sooner or later ( preferably soon ) you have to stop listening to everyone else-me included- and actually measure up the parts you have and decide on a course of action for YOUR motor.

Clearly, I would like to only have to take the block for decking once. Ideally, I would like to get this into a position to rebuild early December as I am having some time off from work after surgery in a few weeks (sinus op)
Click to expand...

Going by your previous pics and the doubt of that surface being suspect with regard to gasket sealing your going to be decking the block, the question is how much, if you have access to a set of 8"-200mm digital vernier calipers you can verify the deck height by measuring from main bearing tunnel to deck surface, add half of the main bearing tunnel dia to that measurement to get your actual block height, you should check all four corner cyls to verify that the block deck is actually parallel to the main bearing bore as well so your machinist can correct that as well.. main brg tunnel in block is 2.442 therefore 1.221 has to be added to the measurements you take to get actual block height.
You should also fit your cam & lifters/heads etc and turn the motor thru a couple of revolutions with valve train mocked up to check valve to piston clearance ( use some light springs on the valves being checked and do it without a head gasket to allow for the material you intend decking plus a bit of insurance- use a solid lifter or modded with washers in hyd lifter for this check to avoid any hyd lifter compression from giving false indications... valve to piston clearance with a hyd cam should be at least 0.100").
Last edited: Nov 3, 2015

Moderator
So into the garage this morning to check the P2V before any decking decision is finally made and.... not good news

Shots 1 & 2 are from testing with no head gasket in place that drops the heads 0.04" closer. It hit the piston Shot 3 is with the old gasket installed

So I guess I will either need to get someone to cut the pistons, or just replace them. The latter being probably the better option, as the former would reduce the CR more 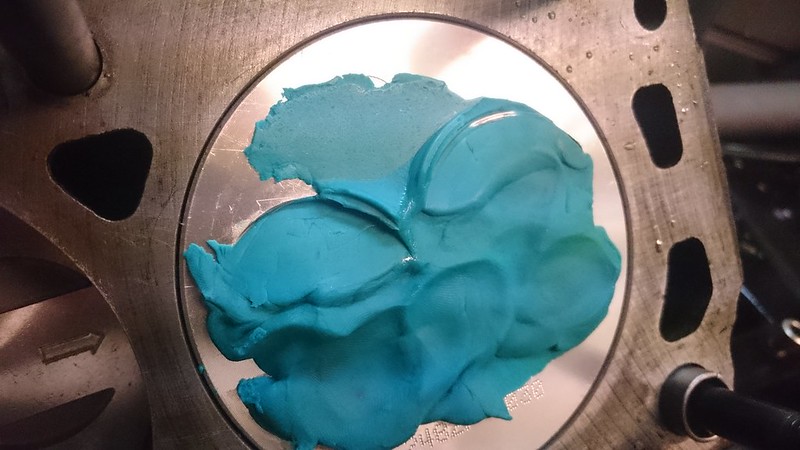 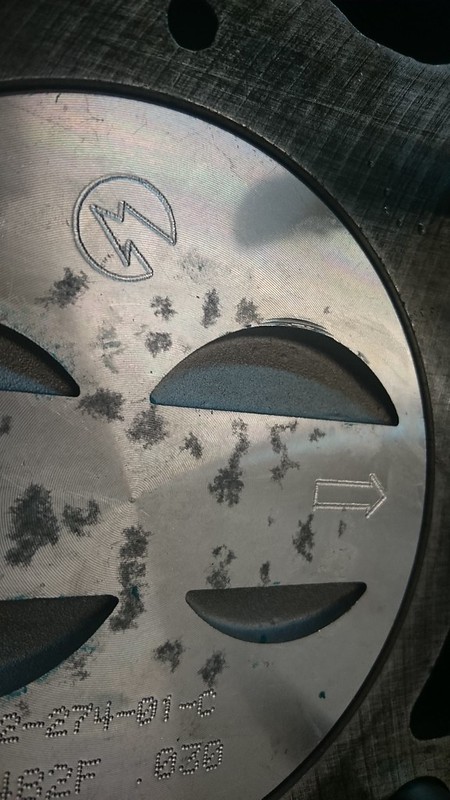 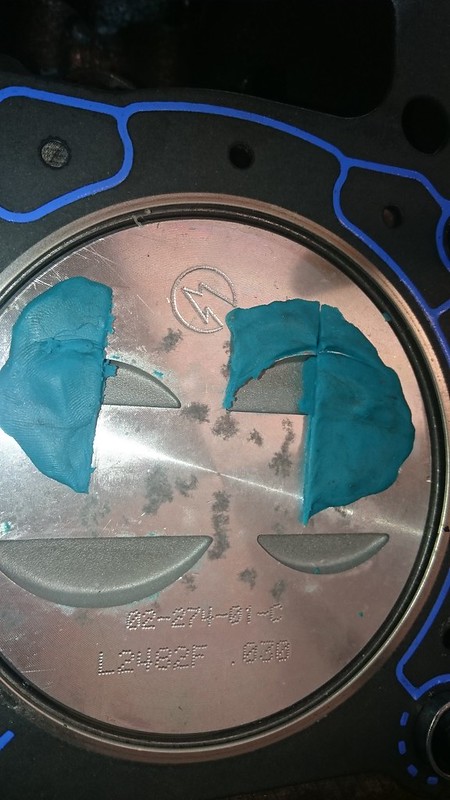 'Not good news'... hell that's the best news you could get, you found out about it before starting the engine and turning it into an even bigger money pit... check that you have not bent that inlet valve on #1, you appear to have created a decent mark on that piston in the checking process. I don't think your alone, there are a couple of similar engine builds on the site at the moment who will likely be rechecking there respective engines after reading this!
W

Brett, have you thought of just cutting the eyebrows rather than machining the whole top of the Pistons? This should hep with the CR !

jac mac said:
'Not good news'... hell that's the best news you could get, you found out about it before starting the engine and turning it into an even bigger money pit...
Click to expand...

Jac, Let me clarify that statement. Yes, I wrote not good news and you are certainly correct in your assessment that finding it before I started it is great. This is me thinking in relation to the personal goal that I had to drive the car to Le Mans whilst I was 40. This means next June. In reality with this hurdle and the fact that I prioritise family and my training (I might have mentioned a few times that I am a keen cyclist and runner ) the car then becomes the next priority and it most likely won't be achieved as I would need to iVA the car. Good thoughts to check the valve and I was thinking of now changing the stock springs that came with the head anyway to the recommended Comp Cams ones for the cam.


wealdenengineer said:
Brett, have you thought of just cutting the eyebrows rather than machining the whole top of the Pistons? This should hep with the CR !
Click to expand...

Frank, yes I have thought about that, but even with these pistons, I am looking around 9.4 CR before I would have to notch them even more; that's assuming that I deck the block down to give a piston to deck clearance of 0.016". Then I would also have to find someone to notch the pistons, which being the UK would probably be not that cheap.

Hence I wonder whether another piston may be more suitable than the ones I have in there at the moment. Something like Keith Black KB116-30, but then I've also had quite a lot to drink this evening and being playing with cordite :evil:

Moderator
So before I go ahead and buy. Does anyone have any feedback on the Keith Black KB116 pistons?

There's a note saying that they will fit Edelbrock 60cc heads, but not GT40 heads

Thanks in advance
Brett

Hi Brett,
they look like the pistons I used in my engine build and have had no issues with.
Just check that they are designed to be fitted with your con-rods i.e. they are machined differently for fixed or floating pins.
Rgds,
Andy

Moderator
Thanks Andy, apparently they can be either floating or fixed (you don't use the spring locks if pressing).

If I do this, going to have find someone to pressout and then put back in for me

Moderator
If going floating, I would definitely do the pin oiling mod. I think Jac may have detailed it here on another thread, but basically an 1/8th hole drilled through the top of the small end, countersunk & then deburred at both ends..

Then there's the piston/ pin oiling mod but I think that's on your thread already...

It's a great idea to float if you envisage tearing down your motor every year..

Moderator
Not much update recently as I have been recovering from sinus surgery (again) :sad: However, I did take the time to get the block over to the machine shop and have 0.018" taken off to bring it down to 0.016" deck height for flat top pistons. I picked it up after work tonight :thumbsup: 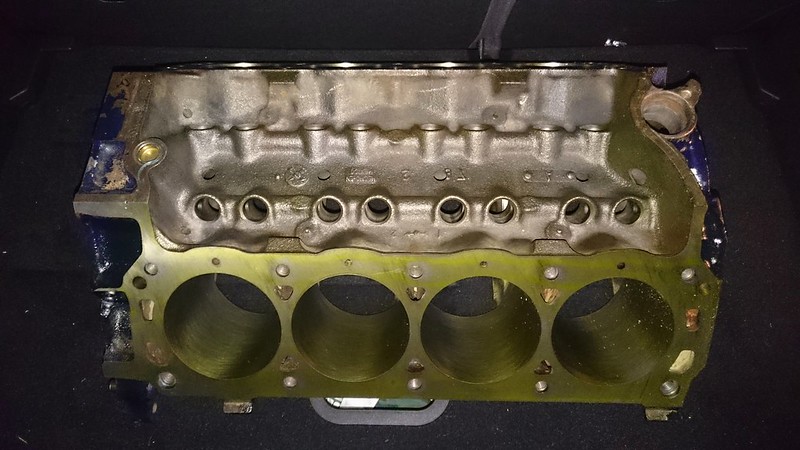 So what now? Well I've made a decision to go new with the rods and pistons. If I was in the US then probably nearly every machine shop I would take it to would be able to press the wrist pin out no problem - not here in the UK. Everywhere (near me) has said no, or they would have to make a special tool/support up to do it (at which point I was doing mental maths which equalled more then probably buying new rods and pistons).

So I have some new Eagle Bushed rods coming over and a colleague will be shopping for me in January when in Dearborn for some Keith Black KB116 dome pistons; this should also help raise the CR slightly.

That means that there will be some Eagle rods and Speed Pro pistons coming to the Garage Sale soon (prob after Christmas)....
N

Good stuff bud, glad to see progress has begun again. If you get bored one day over the break, let me know - maybe we could meet up.

Hi Brett,
Have the same issue with the wrist pins.
Initially tried it myself with a self made tool (1/2" high rate bolt, heating the rods, proper support tool for the piston but after 2 pins out, the thread on the bolt/nut of the tool was destroyed. It really needs a lot of effort to push them out and heating the area is not easily accessible. Decided to outsource this job and after lots of calls, I found a very small company in the Netherlands still willing to push out the wrist pins.
Andy
K
Hi Brett , sorry to hear you've had some issues.
I'm sure your aware the build has been over 10 years now.
I'll give it to you mate, other less mortals would have given up by now.
You will get there in the end and have the satisfaction of all you efforts

Happy new year to you as well
Regards Keith

Moderator
Thanks Keith,
Yes not the timing I had originally planned... Life/work, 2 kids and 2 self-build extensions seem to have got in the way However, as my wife says you can always close the garage and it will be there when you open it back up. I'm so far down the line now that my sheer pig headed persistence means that I won't give up until its finished. I might sell it when I have though...

Brett
K
I know what you mean Brett, Last year I sought of semi retired,down to two days a week.
As from Jan it's one day a week or when I'm needed.
But last year I bought a cottage early 1700's and been working on that, restoring some more motorbikes, etc.
I wondered how I ever did have time to go to work.
Everyday my days are full.
My SGT will be the next issue of Complete kit car magazine regarding the build and again in the issue after that with a follow up.
There coming to take some pics this week coming.

Does anyone have any feedback on Keith Black KB116 or Kb312 pistons please?

116 apparently are OK with Edelbrock 60cc heads, which should be good for mine as well. They are hollow dome. They seem to have more depth in the relief.